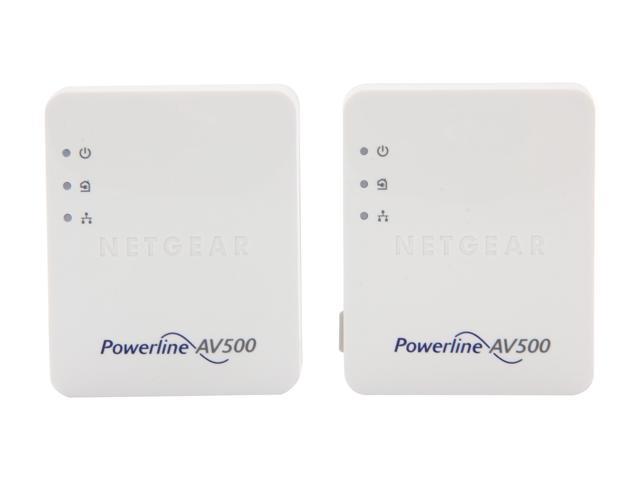 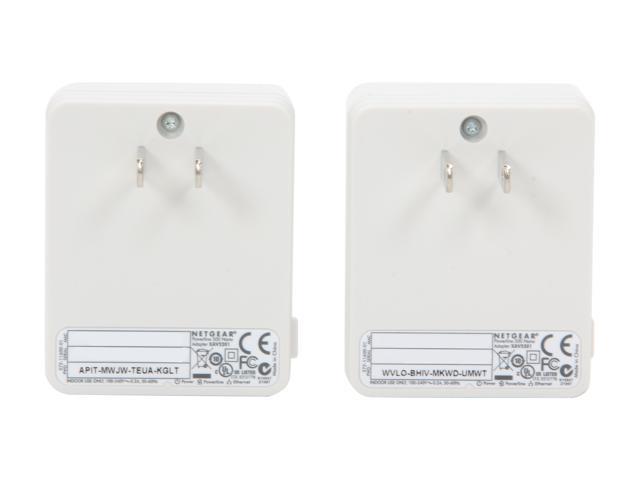 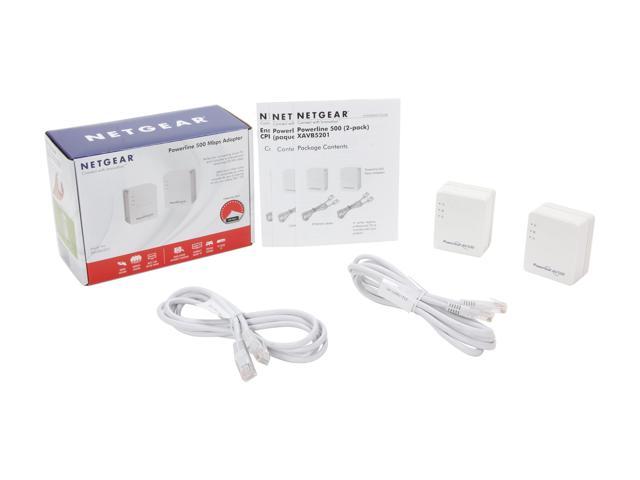 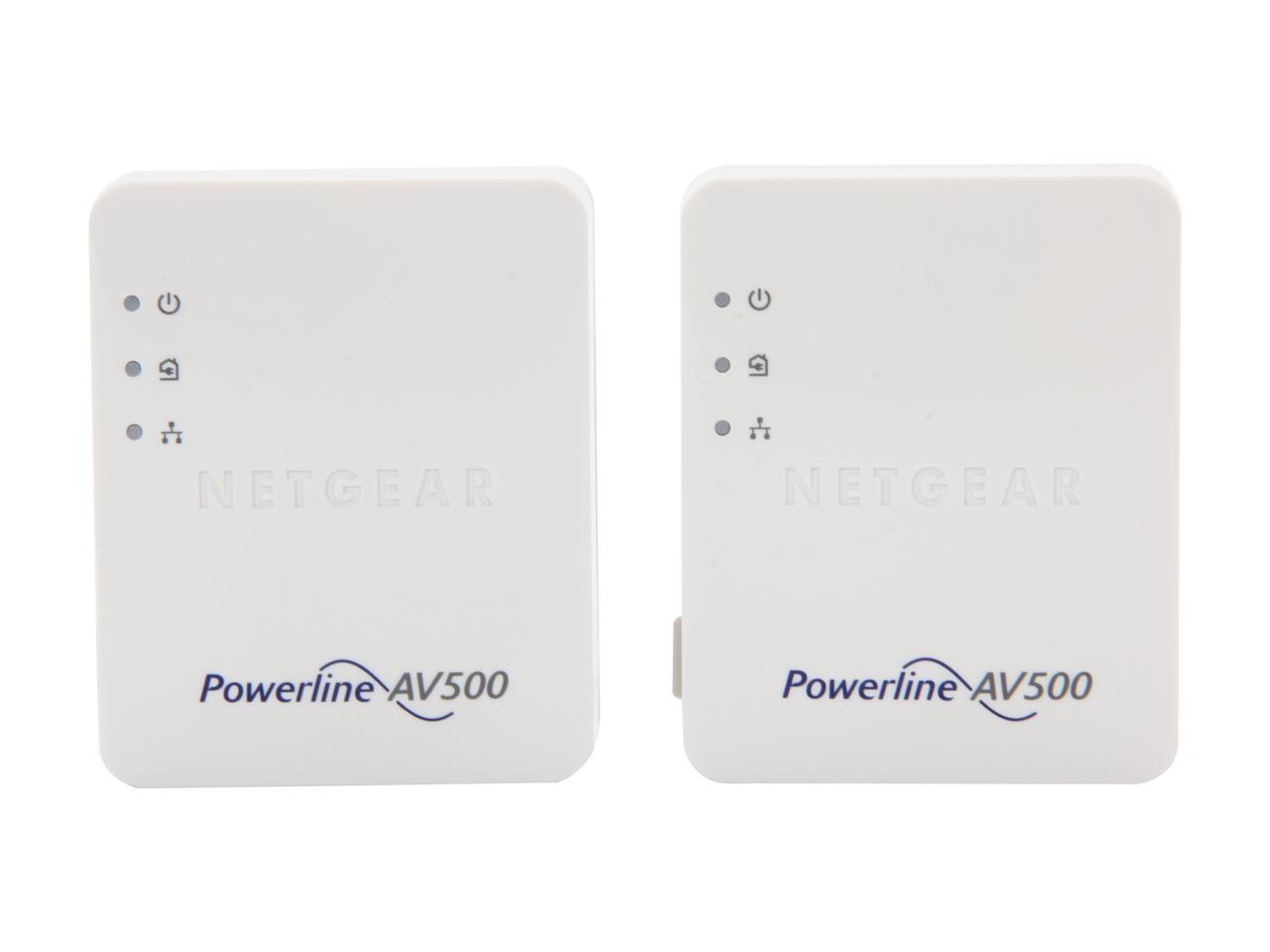 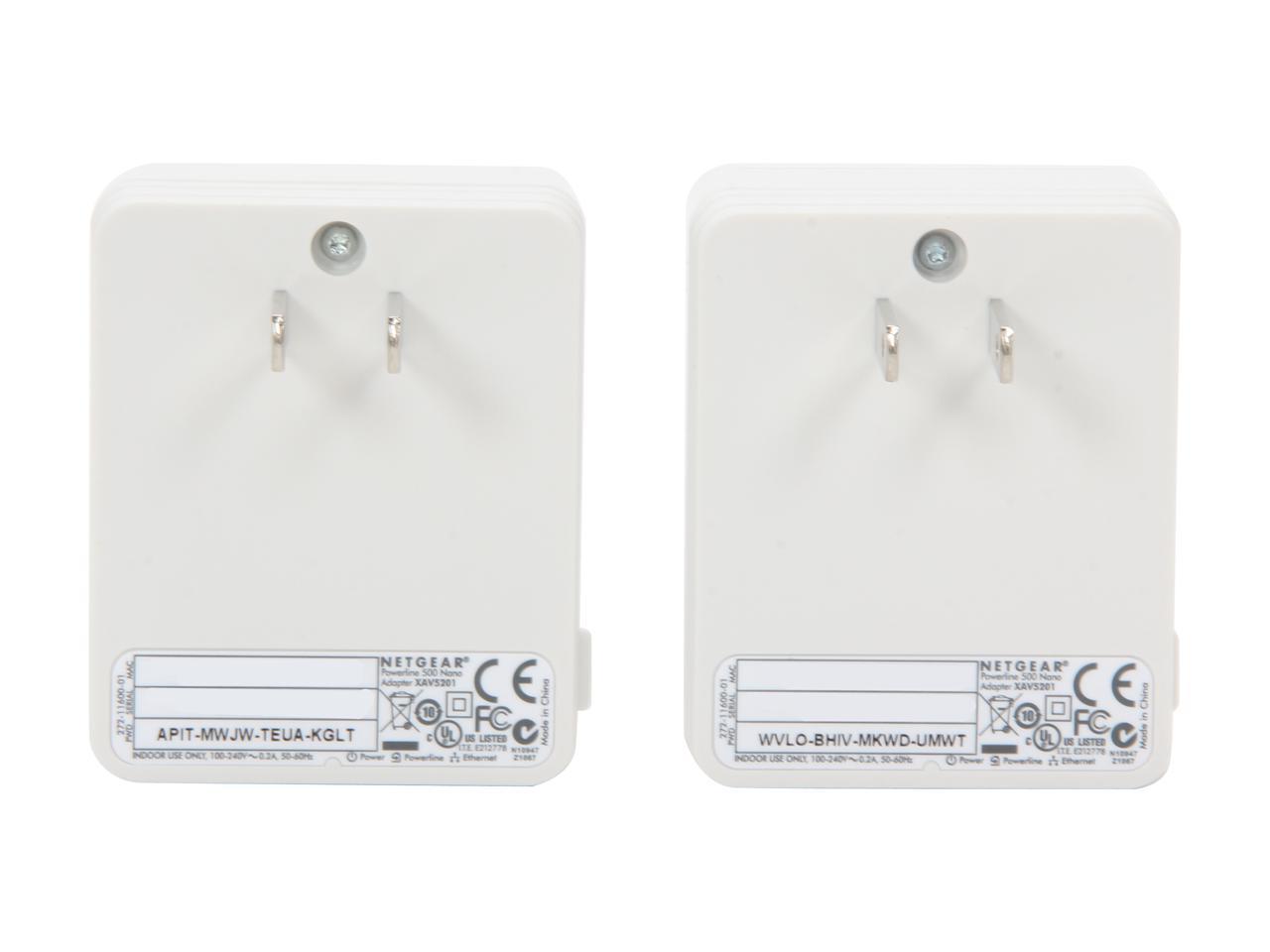 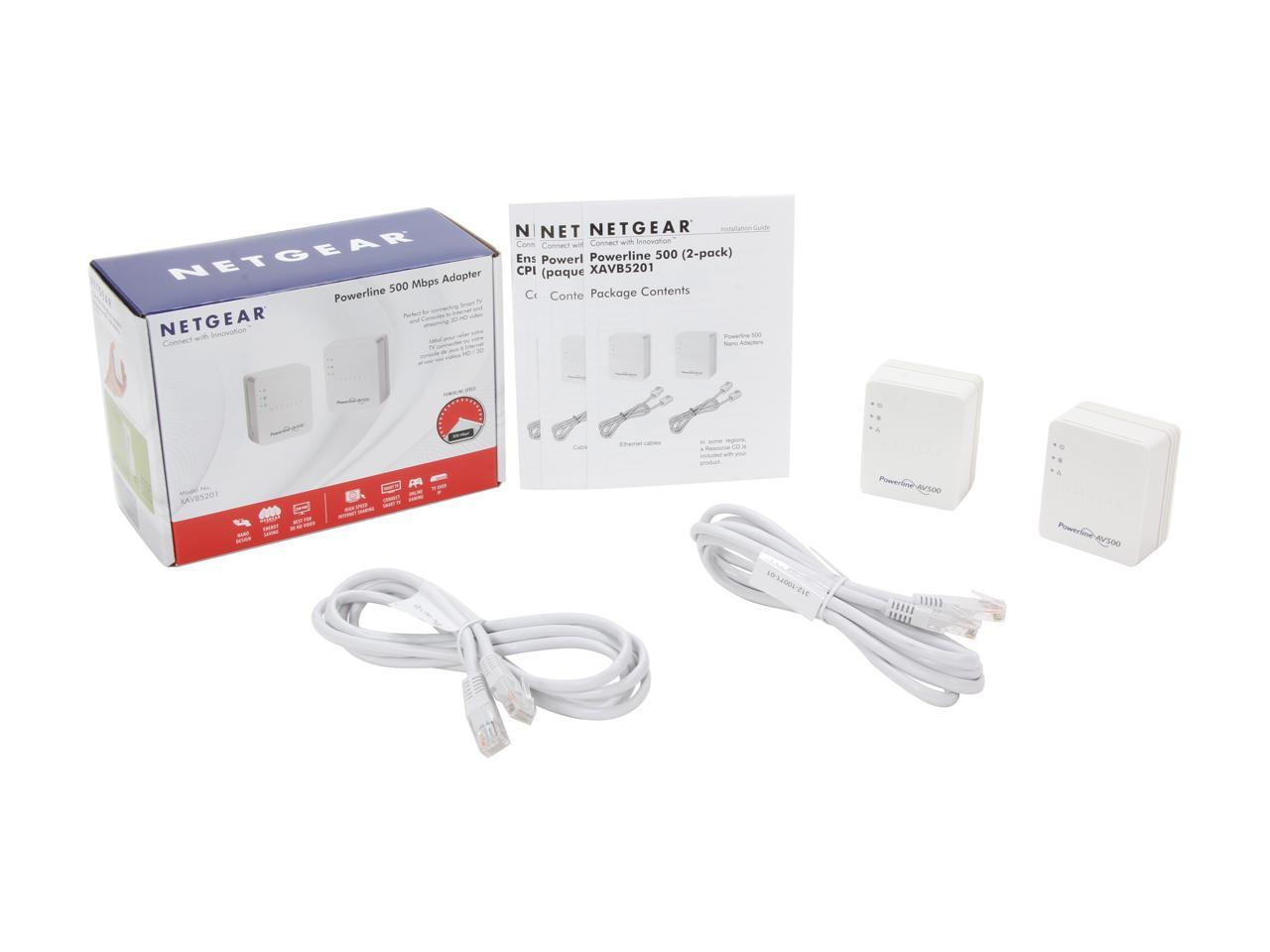 Pros: Very easy to setup, easy to use, worked with existing Powerline kit with the same certification (Powerline AV).

Cons: Speed not as advertised. Seemed that this kit was effected by distance more than my current Powerline kit, although my current kit is only a 200Mps kit.

Overall Review: I received this kit for an Eggxpert review. The kit came with 2 four foot LAN cords and 2 Powerline wall units. Was very easy to set up. Plug one unit into a socket near your router and plug the lan cord into the router and then the unit. All three of the LED indicators went green immediately, letting me know it was working and I had the best connection speed. Used a laptop for my test, down one level in our house and at the other end of the house too. Plugged the wall unit directly into another socket, then plugged the second lan cord in the wall unit and into the laptop. Win 8 reported my connect at 200 Mps. Next up were a few connection tests. I used LAN Speed Test Lite with a 200Mb file to test the connection speed. I also ran tests on my desktop pc, which is plugged directly into the router. Writing (Uploading) Speed: XAVB5201 Wireless G Desktop PC 1,485 Mbps 4,924 Mbps 10,077 Mbps Reading (Downloading) Speed: XAVB5201 Wireless G Desktop PC 4,122 Mbps 470 Mbps 3,757 Mbps As you can see, connection speed for Reading is virtually the same as a desktop plugged into a router. The Writing speed is substandard, not even beating out a Wireless G connection. Overall, this Kit is great for someone looking to add an internet connection for a non-wireless device in a room without a LAN plug (TV, Bluray, Desktop pc, etc.). Speeds aren't quite as advertised, but it's more than enough to stream Netflix, Youtube, Vudu, Hulu or any other set top service on a non-wireless device without any loss of audio or video quality.

Justin B.
Ownership: 1 week to 1 month

Pros: No configuration required, just plug everything in and it works basically like a switch. Good replacement for a gaming adapter. Has a security button on the side to sync all Powerline adapters that have the button pushed within 2 minutes of each other. This is ideal for places with physically close power connections such as apartment buildings. This can also be controlled with the downloadable Powerline Utility (not included in the retail box). The utility also lets you set QoS based on MAC address, IP port, VLAN tag (not likely in a home environment), or ToS bits. I didn't test QoS, but it looks fairly straightforward based on the manual's instructions.

Cons: Netgear's website indicates the existence of a XAVB5001 model with a gigabit connection (1000mbps) instead of this model's fast ethernet (100mbps). Would be nice if a pass-through power outlet was available so that it didn't eat an outlet. Not sure if this would mess up the signal, though. While the unit is small, I'd prefer if it was more sideways instead of up & down so that it would cover less of the entire power outlet. I wonder if it's possible to use a power cable to connect it to the wall to take up less space? I had lots of problems - see the notes below.

Overall Review: Now for the part that matters - the benchmarks. All numbers are based off of transferring a 28GB Tron Legacy (2012) M2TS from my home server. Simple process - home server in my basement wired via gigabit to my main router (Linksys E4200) in the 2nd floor office. XAVB5201 (this adapter) wired directly to the same router and plugged into the same power outlet. Second XAVB5201 plugged into the outlet detailed below and then wired to my laptop (Intel 82579LM NIC in a Lenovo ThinkPad T430). Wiring in my townhouse is circa-2007, so pretty new. All speeds averaged out over the time to transfer the file. NO power strip was used since the instructions explicitly say not to use one. Baseline - Server direct to laptop via gigabit router, NO Powerline adapter 110 MB/sec (~880 mb/sec) Same room, different outlets Fail. Apparently my townhouse neighbor next door also has a Powerline adapter. I can see her network but not mine. Pressing the Security button on the adapters so they sync up only with themselves on my router doesn't seem to do anything despite the downloaded instructions indicating this is the fix to isolate from nearby but dissimilar networks. The lights flash like they're supposed to, but I still end up only seeing my neighbor's network. She doesn't have any shares, so I couldn't test the speeds on her network. I spent a few days with this issue without a fix. My laptop connects to her router and not my router. I can't seem to find a way to make it "see" my router or network instead. 2nd floor room to basement Fail, see above. 2nd floor room to basement Fail, see above. Viola! Went next door & explained the situation. She graciously unplugged her adapters for me for an hour. Same room, different outlets: Very steady 11MB/sec (88mbps). This is pretty close to the theoretical max speed of this unit since it's hampered by the Fast Ethernet connection Different rooms Fail. Couldn't get any other outlets in my house to work :-( Assume this is because they are on different circuits? Summing up - I wasn't super impressed with this. I've actually been thinking of getting a Powerline adapter for awhile for areas that don't have good wireless coverage and need more speed than the trickle I get with wireless. I was hoping the Powerline adapter would work, but it didn't. Maybe it's a limitation of how my house is wired, or maybe it isn't. Would I recommend this item? Not if you lived in my townhouse community with our wiring or if you live in a townhouse with a neighbor that has Powerline adapters. Then again, if you're desperate, you can always return it if it doesn't work. As a final PS for people who may want to use this for streaming video: To stream regular DVDs over a network, you need a steady speed of about 750 KB/sec (6mbps). To stream original quality Blu-Rays, you should count on about 6.5MB/sec (52 mbps). So even though this isn't gigabit, it would still technically be fast enough to stream Blu-Rays. H

Cons: Cannot be plugged into a GFI socket.

Overall Review: These have worked very well for me. I am able to get a desktop working in the garage with reliable internet. I would recommend this product if you cant get a cable or wifi to the device needing to be networked.

Pros: Adapter works with other brands of powerline adapters.

Pros: Simple to set up and use. Just plug one of the adapters into an electrical outlet near your router and connect it to the router with one of the provided Ethernet cables, then plug the other adapter into an electrical outlet near the computer that you wish to network with and attach it to the computer with the other Ethernet cable, and you're set.

Cons: The "500 Mbps" speed claim seems a bit optimistic to me, but it's not enough to take an Egg away from it, ratings-wise.

Overall Review: This is a great product to use if you wish to eliminate unnecessarily long Ethernet cables between a computer and the router, particularly if they are located in different rooms or on different floors in your house or apartment.

Pros: – Very easy and straightforward setup – Less than 0.5W power consumption – LEDs are not overly bright – Reliable, has been running for 36 days straight without dropping signal

Cons: I am using a ASUS RT-N66U and CAT6 cables for this test: – Netgear advertises 500Mbps speed but provides you a Megabit 10/100 port. – For the price, these adapters do not feature a wall socket pass-through. Since you cannot plug these into a power strip/surge protector it will most likely occupy one wall socket if not the entire socket. – No where near 100Mbps let alone 500Mbps, this is further affected by how your house is wired and distance – With a 5GB file I averaged 47Mb/sec (Megabit/sec)

Overall Review: If you want 500Mbps speeds go with a REAL Gigabit port adapter. The purpose of these powerline networking adapters is to get internet to places in your house that wiring and WiFi cannot reach. It is no substitute for wired (CAT5e/6) networking.

Pros: Easy to set up, just open the box, plug in to a power outlet by your router, plug the ethernet cable into the router and adapter, go to the other room you want internet it, plug into the outlet and plug the ethernet cable into the computer and adapter. Done, you now have a pretty fast connection. Each adapter has 3 green LED's on it to show status, not too bright or annoying. They work with other brand's adapters (at least with my TP-Link ones).

Cons: Pricey for what you get. There as similar products from other makers that do the same thing for a lot less. Not really sure of the price premium for these. If I had to make a choice based on price and performance, the TP-LINK TL-PA4010KIT I have is almost 1/2 the price and I noticed no difference in the performance.

Overall Review: These work well and do what they are supposed to. Easy to set up and secure if you want. Decent speeds (not as fast as my hardwired home gigabit, but much easier and faster for apartment dwellers who can't run cable and want better stable speeds than wireless). If these were on sale for around $50, sure, but at full price, there are better cheaper options.

Pros: It's packaged excellently and works very well right out of the box. There's no hassle, no need for reading instructions even (perhaps minus the part where you don't plug it into anything other than a direct outlet - no extension cords, no power bars). So far as I can tell it works as advertised with good speeds (see other thoughts). There's really not much else to be said, it's fast, simple, and works.

Cons: The only major con I notice is that there are competing models that work just as well as this, if not better, from other companies that are a much lower price. I like Netgear enough to usually go with them by brand name alone, but it cannot justify doubling the price tag to other competitors.

Overall Review: I was able to test this with the best of what equipment I have available. My internet connection speed is not "top of the line," but it's definitely considered "average or better." I had no speed loss from the internet speed, and it worked fine in any room of my house. Again, my house isn't huge, around 1100 SQ. FT home, but testing from the furthest outlets apart, I had no issues and no signs of quality degradation. Other reviews have remarked that this can be an issue, but I can only hazard a guess that they live in much bigger homes, in cities with better internet speeds, near other homes that could possibly have interfering devices. Bottom line, top notch product, maybe a little expensive, but would definitely recommend it as a good solution for someone in need of a Powerline Kit.