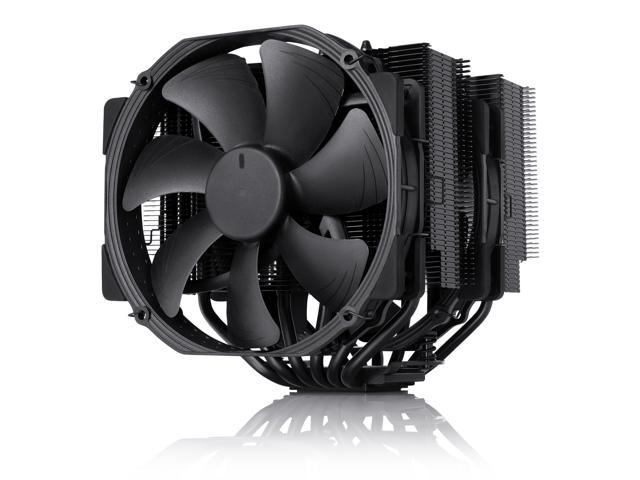 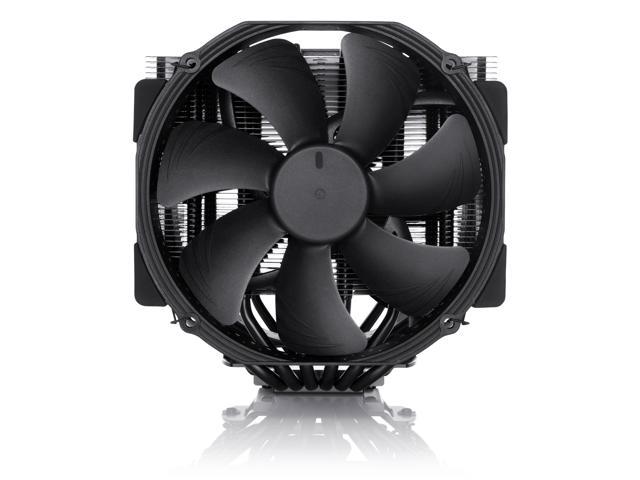 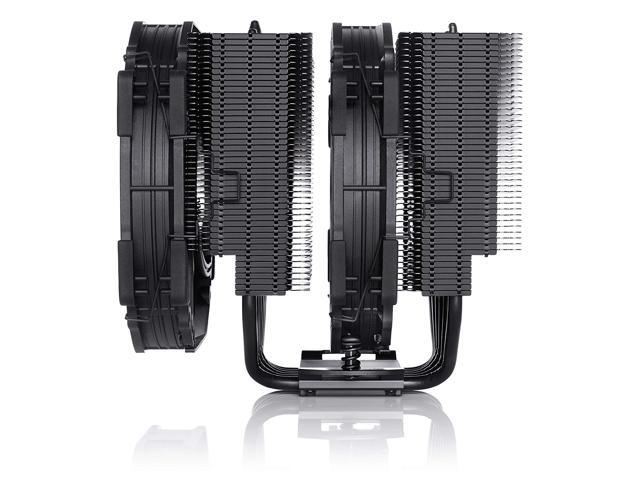 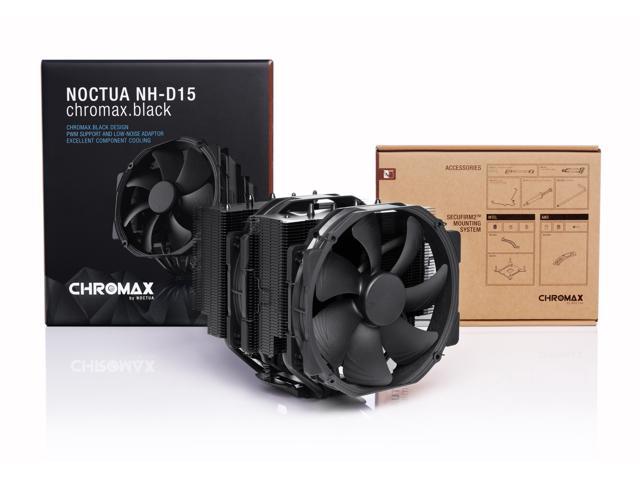 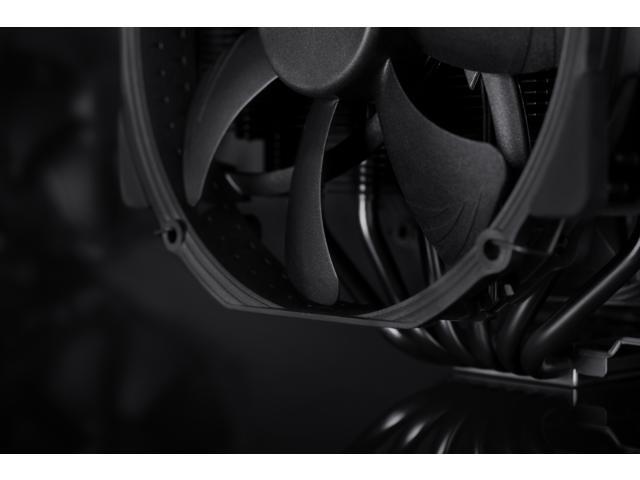 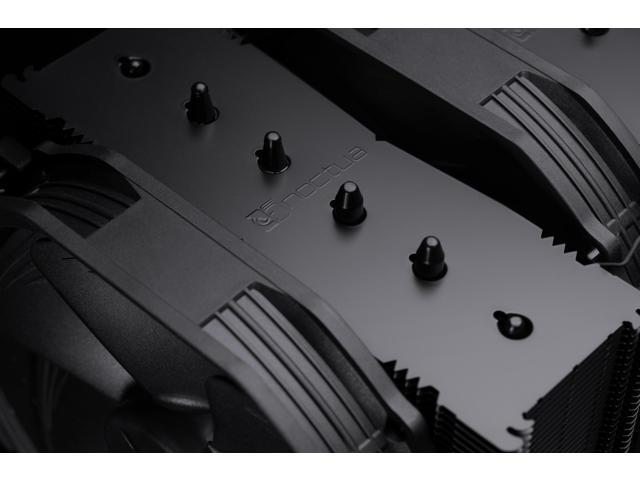 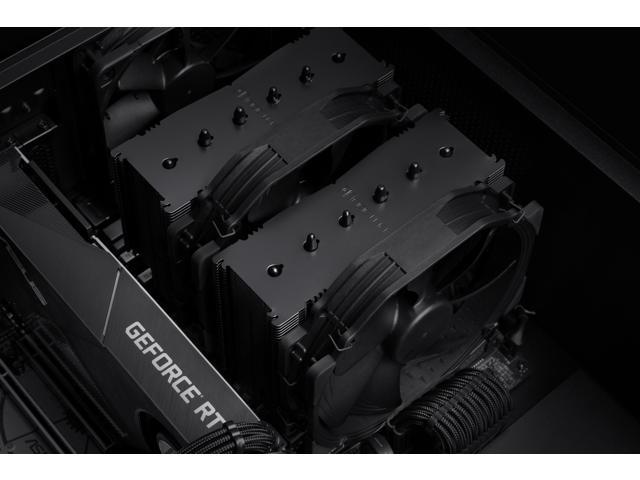 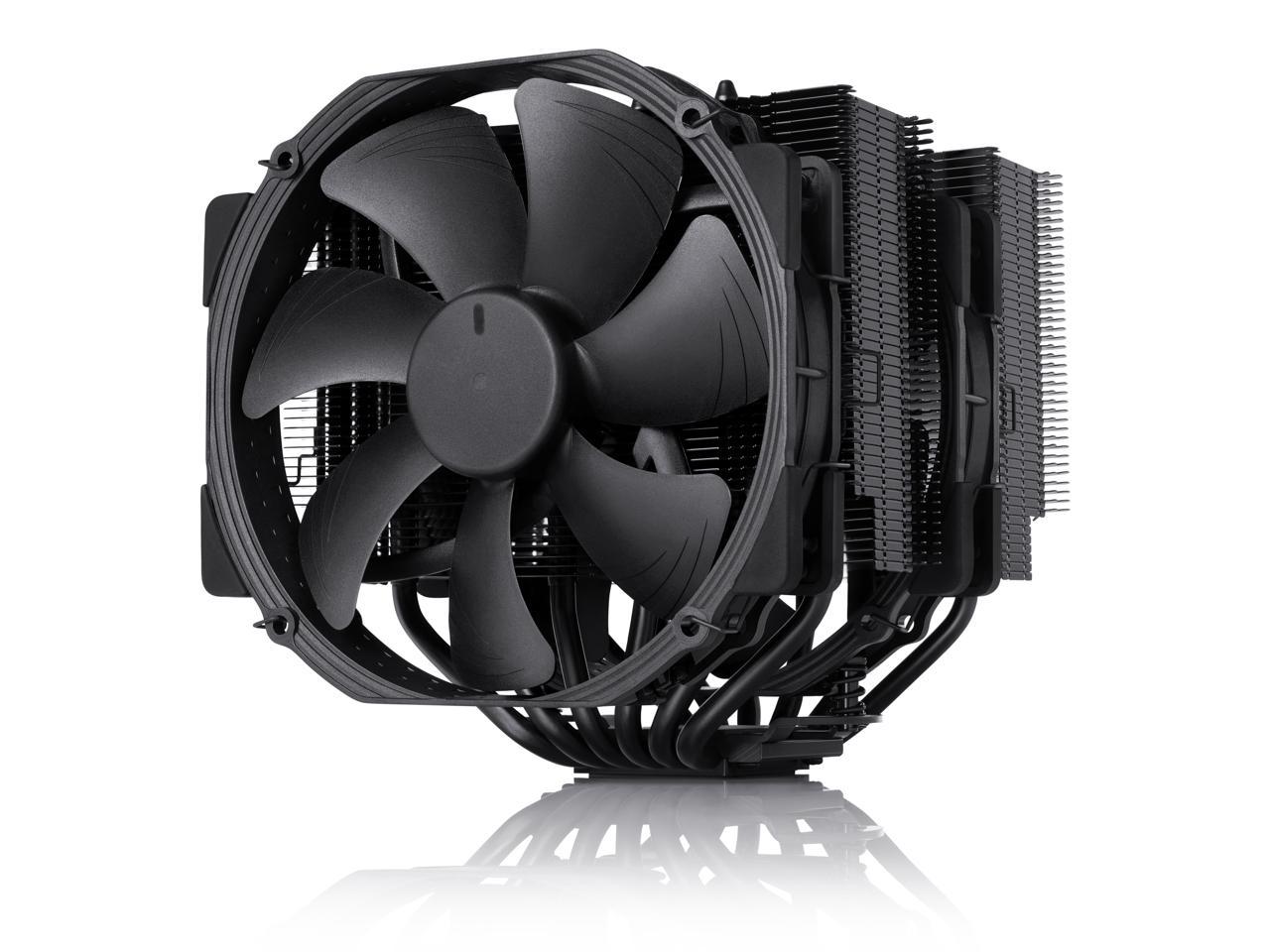 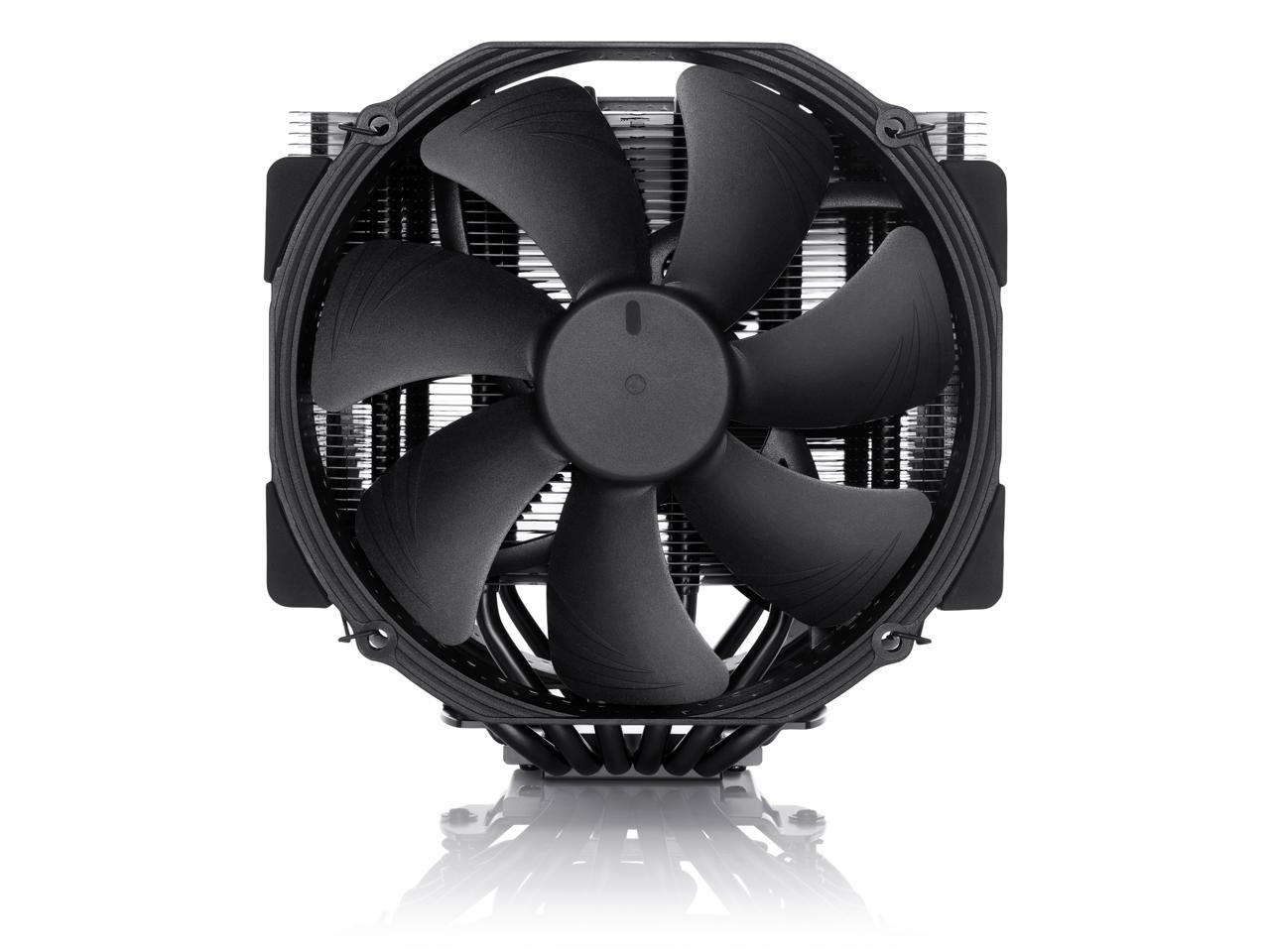 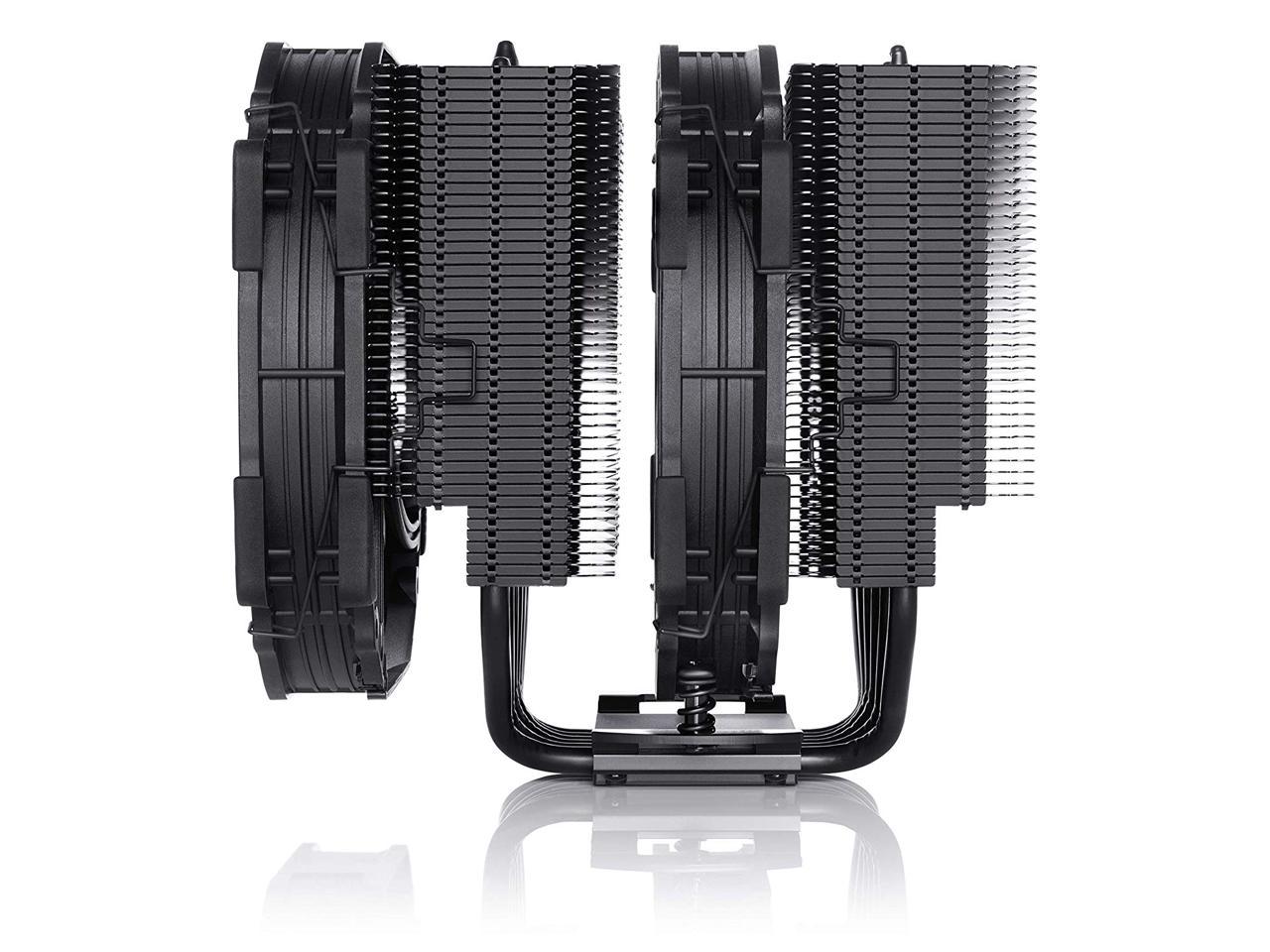 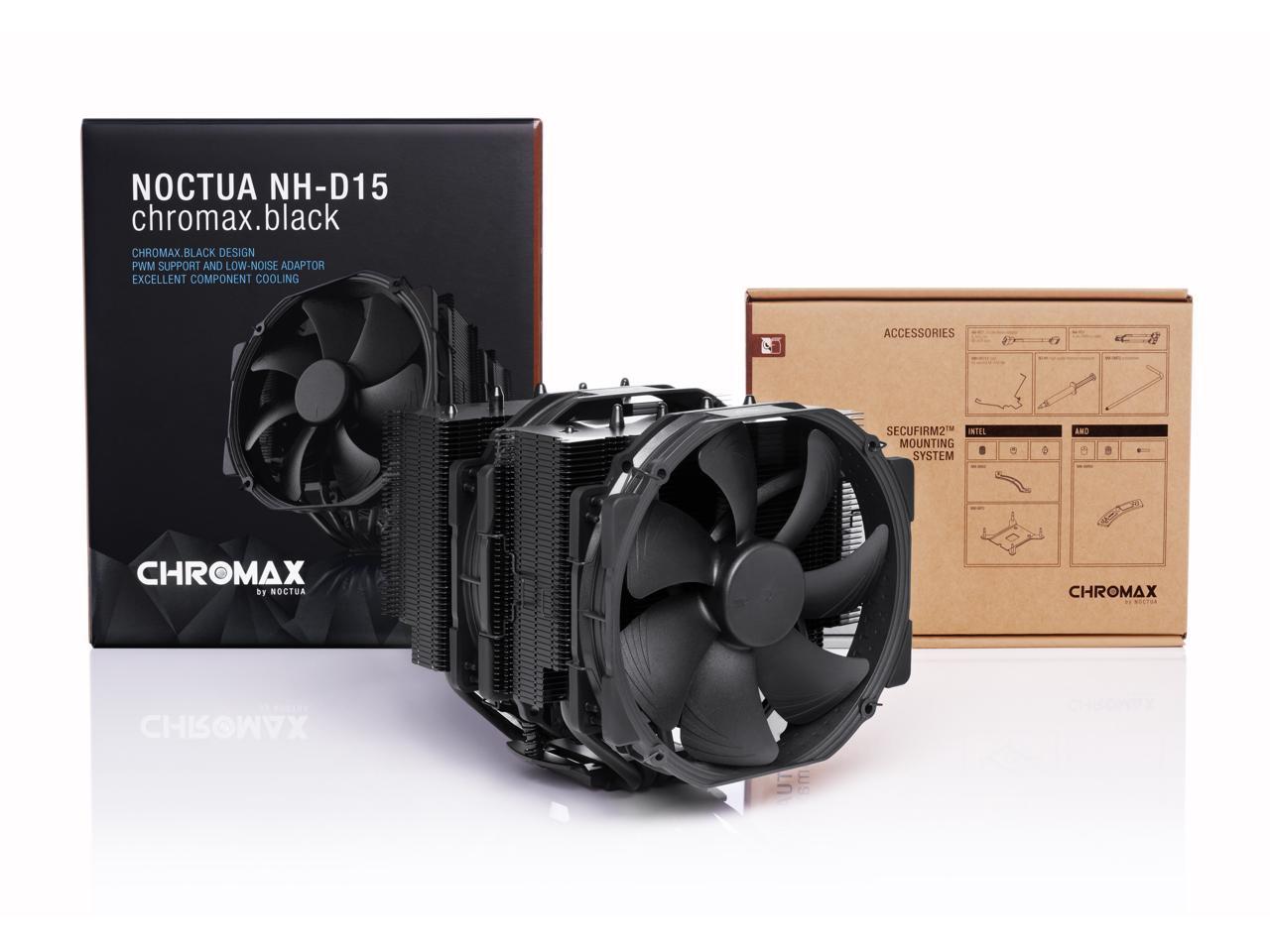 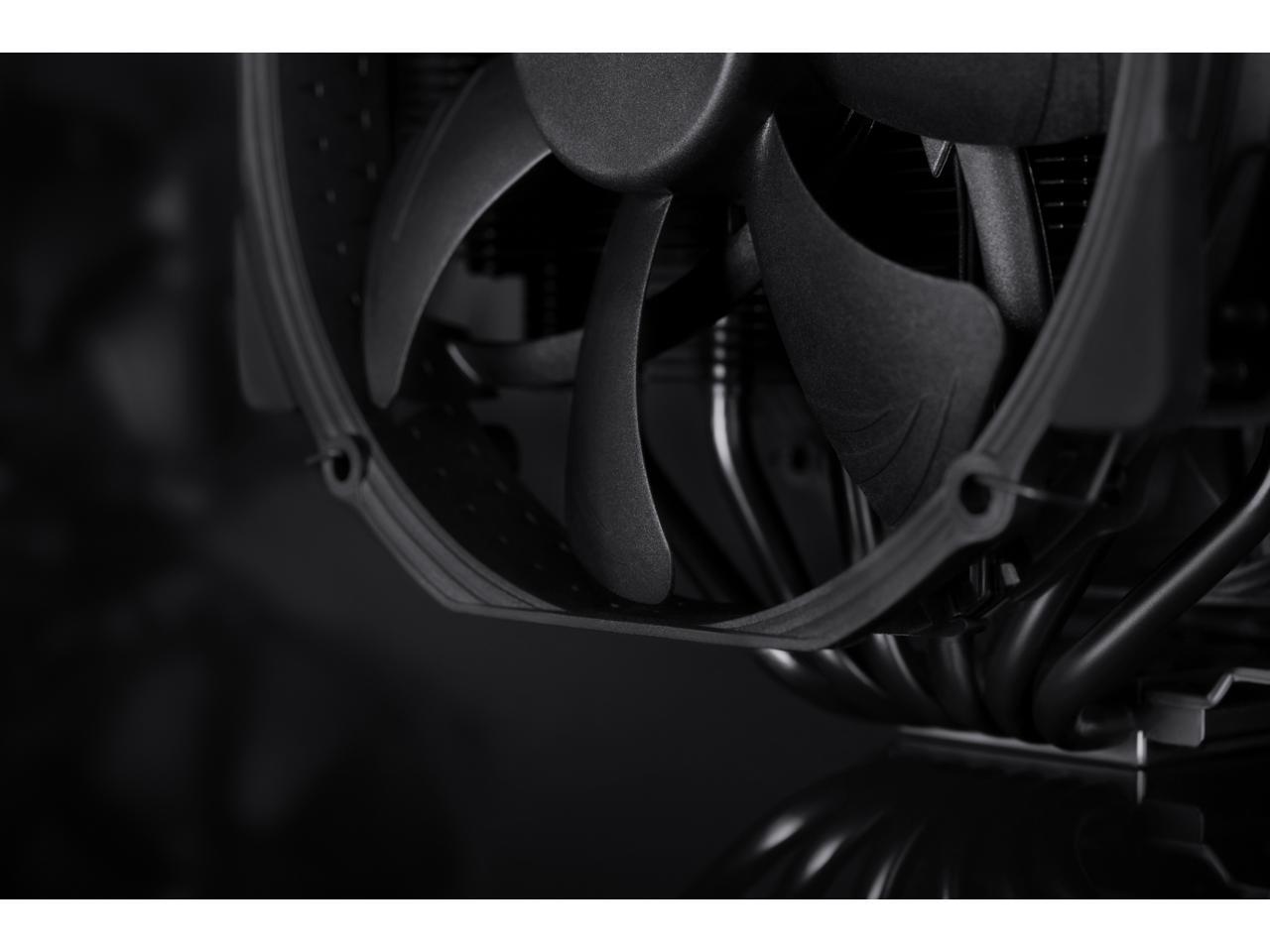 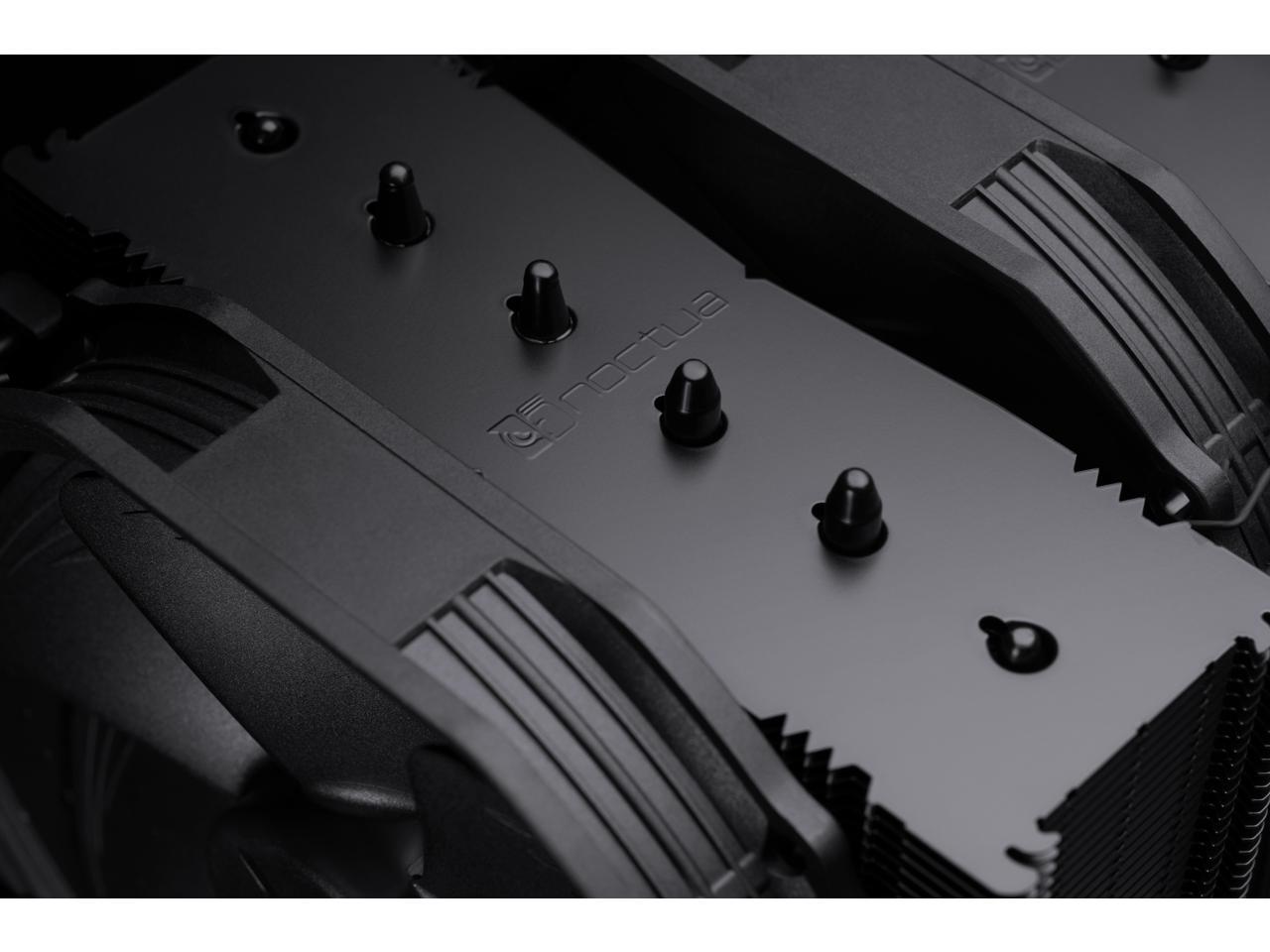 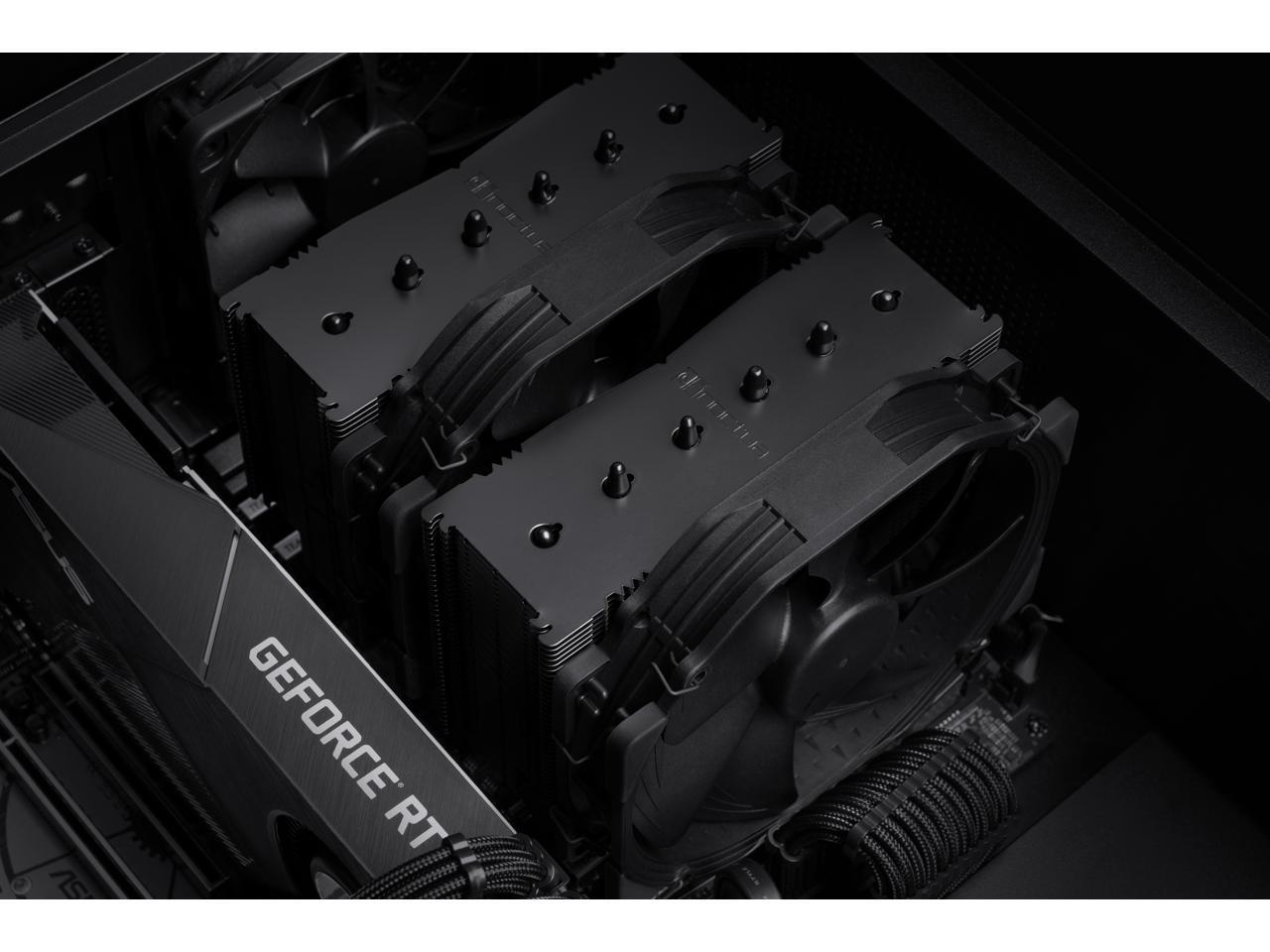 The NH-D15 chromax.black is an all-black version of Noctua’s award-winning flagship model NH-D15 premium-quality quiet CPU cooler. Thanks to the same proven dual-tower heatsink design and NF-A15 PWM fans, it stays true to the NH-D15’s successful formula of rivalling the performance of all-in-one water coolers while maintaining superb quietness of operation. At the same time, the chromax.black version with its black fans and black coated heatsink combines these assets with a sleek stealth look. Topped off with the renowned SecuFirm2 multi-socket mounting system and Noctua’s enthusiast-grade NT-H1 thermal compound, the NH-D15 chromax.black is a deluxe choice for both overclockers and silent enthusiasts who seek an elite-class heatsink that looks just as great as it cools. The NH-D15 features two of Noctua's premium-class NF-A15 140mm fans. Complying with Noctua's AAO standard and featuring sophisticated aerodynamic design measures such as Flow Acceleration Channels, the NF-A15 has quickly built up a reputation as one of the best 140mm fans on the market. Thanks to its recessed lower fins, the NH-D15 provides 64mm clearance for tall memory heatsinks in single fan mode, making it compatible with most high-end RAM modules on the market. In dual-fan mode, the NH-D15 should be used with standard-height RAM (up to 32mm). Using the optional NA-HC3 and NA-HC4 heatsink covers as well as the NA-SAVP3 anti-vibration pads (available in black, blue, green, red, yellow, white), the NH-D15 chromax.black can be fully customised to fit popular build colour schemes such as black and red or black and white. The NH-D15 chromax.black is black from head to toe: Featuring a black coated heatsink, black fans with black anti-vibration-pads, black fan clips and black mounting parts, it’s right at home in all-black builds and easy to integrate with other colour schemes.

Cons: EXTREMELY LARGE; Check your case specs to make sure cooler will fit. Difficult to tighten down, but very well worth the effort Large fans will sit high to clear most memory modules

Overall Review: Put on my brand new build with Ryzen 9 3900X, and works like a charm. I set a manual fan curve in BIOS that puts fans to 100% PWM at 70C. Running Cinebench maxed out at 76C with an initial peak at 78C during fan ramp up, but averaged the entire benchmark at 75C. If you are wondering why you have high temps at idle despite this cooler, make sure you update your chipset driver. I'm idling 38-43C in ambient temps of 73F/23C. Pricey, but worth every penny.

Pros: No water cooling to deal with, quite looks awesome temp runs great make sure your tower is wide to fix it comes with everything In kit ram has lots of room

Overall Review: If your looking to do a build with out water cooled hands down this is the best air cooler the kit was awesome so put together great

Cons: - The box seemed to have been opened and it was missing the AMD screw kit set (screws and polyurethane socket standoffs for AM4). The Intel ones were there but no AMD set. Thankfully some 10 years ago I bought a NH-D14 and had a spare AMD screw set. Yay for AM4 standard never changing. This would of been a show stopper and a return if i didn't have the old parts. Removing a egg for that. - Cooler will clear the RAM dimms but the fan will not in a push configuration, only in pull.

Overall Review: Love the cooler and the fans and i have never had issues with either Noctua or newegg so i'll toss this to a mishap and hopefully this doesn't become a habit.

4 out of 4 people found this review helpful. Did you?
Anonymous
Ownership: 1 month to 1 year
Verified Owner
Not as effective under load as I had imagined but still a great air cooler. Probably the best you will get.7/27/2021 3:31:52 AM

Pros: It's black! I'm glad that Noctua finally saw the light...or the dark. (I would not have bought it if it were silver colored with brown fans. I'm that vain.) Quiet fans. adequate performance for air cooling. Has better ram clearance than many tower coolers, and a few options to deal with clearance issues if you have any. Fits perfectly in a Fractal Design Meshify 2 case with a couple cm between it and the side panel. it also easily clears Corsair LPX memory modules without raising the fan at all. If I need to remove my RAM for any reason, I can do so after removing just the front fan. The mounting system is simple, secure, and easy to install.

Cons: When a fan is installed near your RAM, it will likely be over your DIMM sockets. You will not be able to see your RAM, so don't bother with RGB modules. I went with Corsair LPX ( Low Profile) memory, which are some of the shortest DIMMs on the market. This allowed me to install the fan in it's optimal position without issue. If you have taller modules, then you can install the fan higher on the tower. However, If you have to shift it up more than a cm or two, then you might run into problems getting your side panel on. Make sure your case is wide enough to accommodate this beast. The fan clips are a little annoying to deal with. To remove a fan you need pull them back, and away from the cooler. The clips are stubborn and like to hang up on the fins.

Overall Review: I thought for sure that this would keep my new 10700K nice and chilly. It does keep it below TJMax (Temperature Junction Max), IE: The temperature at which CPU throttling begins. For the 10700K TJMax is a staggering 100 degrees Celsius. With this cooler and 2 fans installed in push configuration I peak at 82 Celsius with Prime95 using the default configuration. This is with six 140mm case fans also blowing at 100% speed. Obviously at this point things are loud, but no one said calculating Mersenne primes was going to be easy. Now...you're not going to hit those temps playing games. You probably won't even crack 62 degrees with CPU at 100% load under normal conditions. Playing RDR2, I run about 54 degrees with the fans running at a pretty low speed. This 82 degrees I'm talking about was under the most stressful of Prime95 stress testing, and 18 degrees from TJMax isn't unacceptable under those conditions. Fortunately my Meshify 2 has a removable top panel, which gives me access to the headers and power connectors near the top of my motherboard even with the cooler installed. If I didn't have a removable top panel, I would not be able to reach my CPU power connectors, or even the CPU/pump fan headers. What I'm saying is you better make sure you have everything connected, installed around, and under this beast before you install it. It will absolutely be in the way.

Pros: The best. Was using a stock AMD cooler for the Ryzen 5 3600 and hitting temps between 85 and 87c doing stress test. This dropped those same benching scenarios down to 66 to 68c. That was far better than I expected, and I expected a lot.

Cons: Fan clips still being used. Kinda touch to deal with at times on the heatsink fins. But definitely not a deal breaker.

Overall Review: Recommend over any air cooler, and most AIO coolers. No worries on pump failures and no loss in performance. I have used an AIO cooler for the last 9 years. An all black DH-15 was a dream come true.

Pros: Amazing looks, does a great job cooling my 9900KF while being very quiet. I’m able to run it with one fan and used the other fan as front intake. If you run into clearance issues with the cooler height, move the centre fan down and replace the front fan with a NF-A12. Installation was easy. 5/5

Cons: Large footprint may not fit all boards / Ram / cases...check before you buy.

Cons: A bit tricky to install Need to make sure you have enough space in your case

Overall Review: This CPU cooler is massive. The CPU fan barely goes past 20% and the CPU stays cool like a cucumber. I don't have to stress about leaks, it's easily serviceable. The only downside is that it is harder to transport than smaller coolers and AIOs (not recommended travel with the massive cooler installed as it could put a lot of strain on the motherboard). Since I don't intend to transport it anywhere, it's perfect for me.

Pros: The cooler is a bit over kill for my Ryzen5 3600 NAS build and manages to keep it very cold as a result. Its very quiet and the addition of the low power cables is a really nice touch for my build. I also opted for Kryonaut by Thermal Grizzly instead of the provided thermal paste and the two seem to pair very well together. Installation was very straight forward and the 2nd fan was rather easy to attach! Fan cables were long enough to properly manage for my older CM HAF 932 case!

Cons: None - Well priced cooler with great performance and a low profile color (no rgb)

Overall Review: Double check your memory height before considering this fan! I ended up having to rewire and move the 2nd fan to the rear of the case as an exhaust. The fan is a still perfectly silent and the cables were long enough to properly manage. Would heavily recommend for NAS builds!