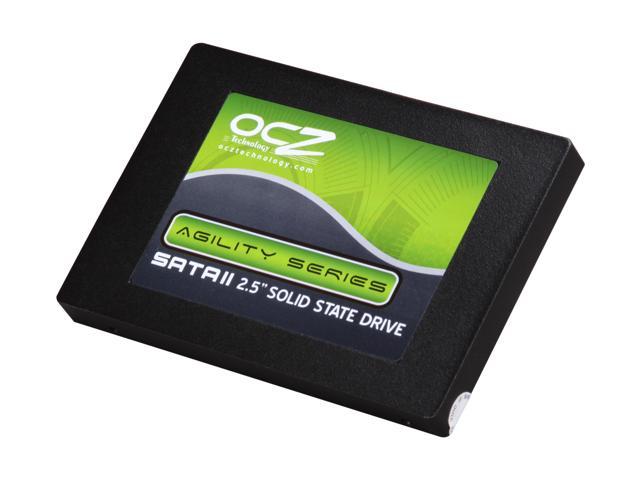 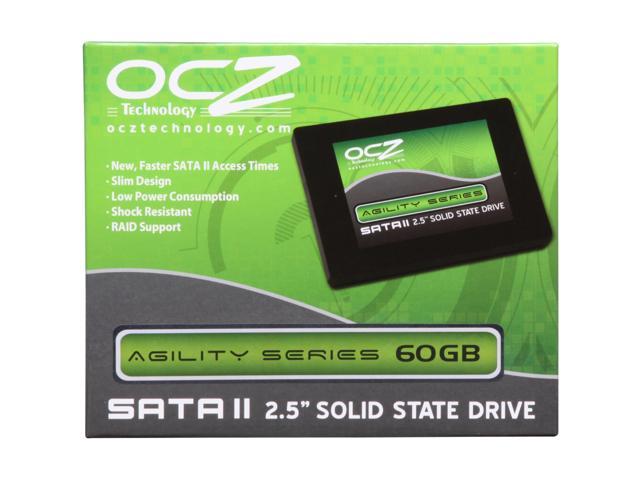 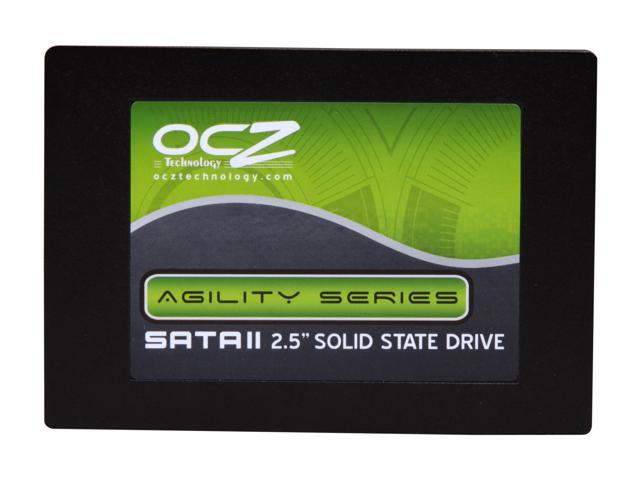 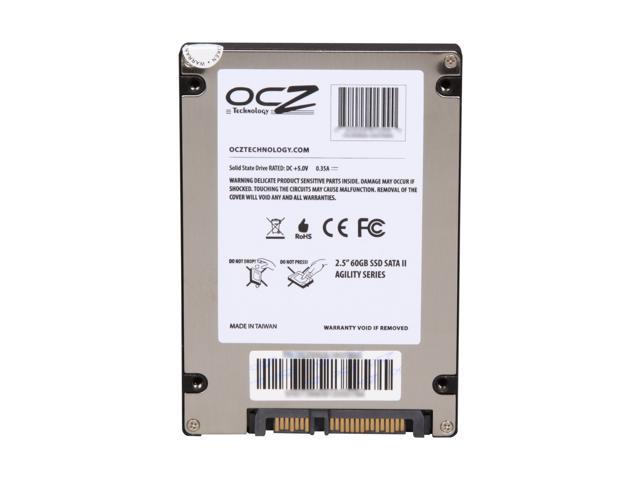 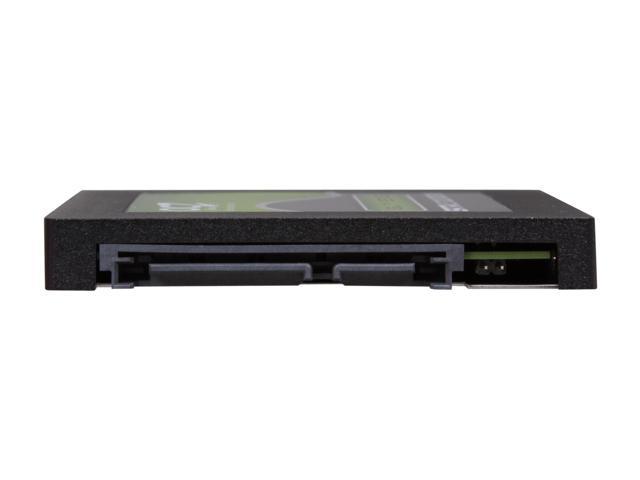 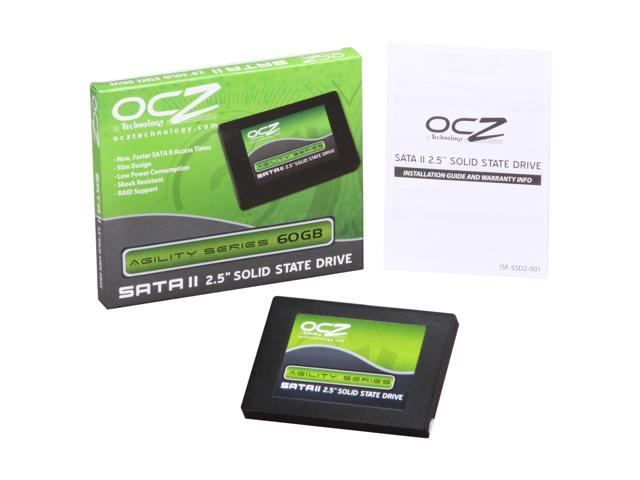 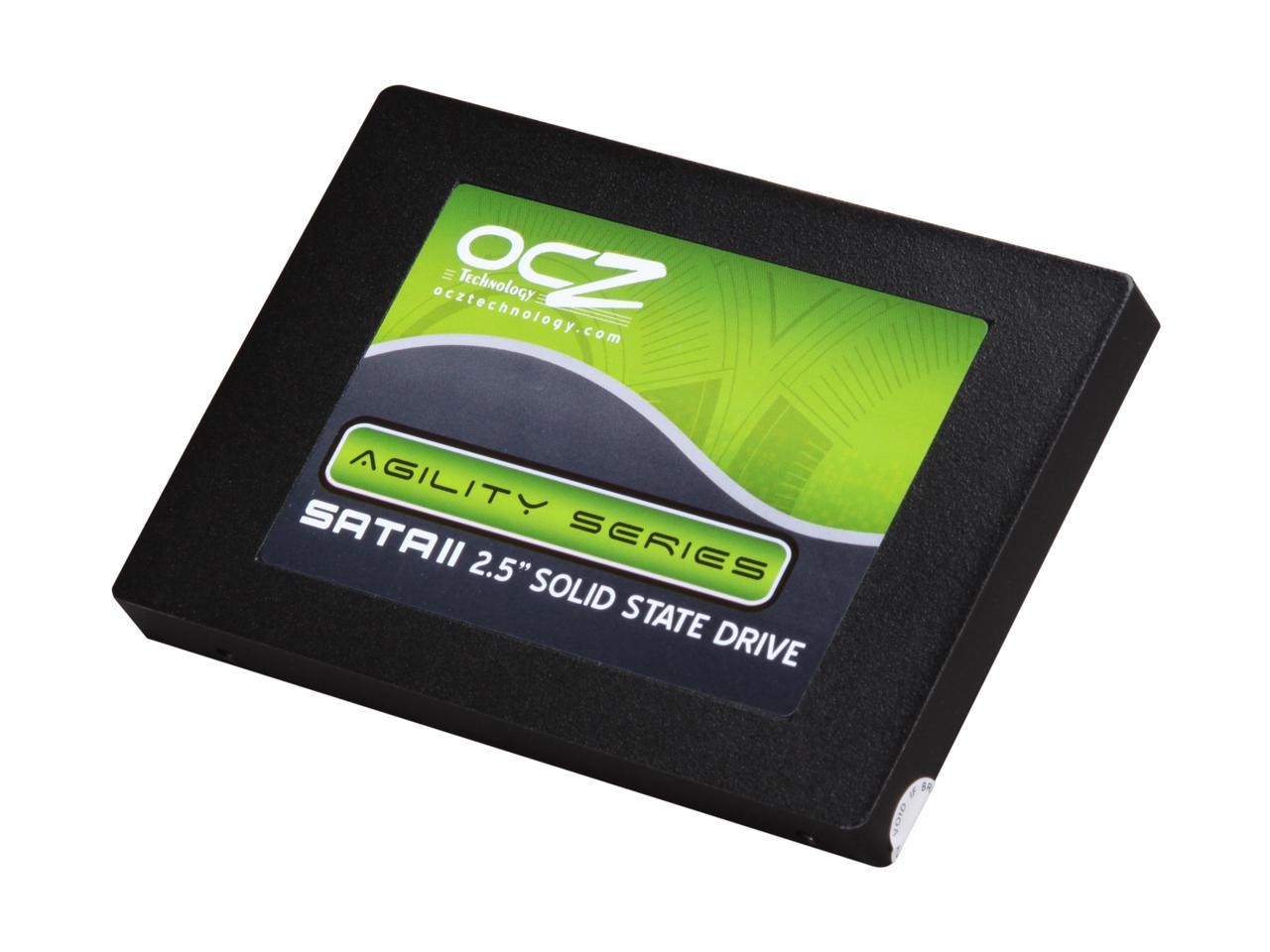 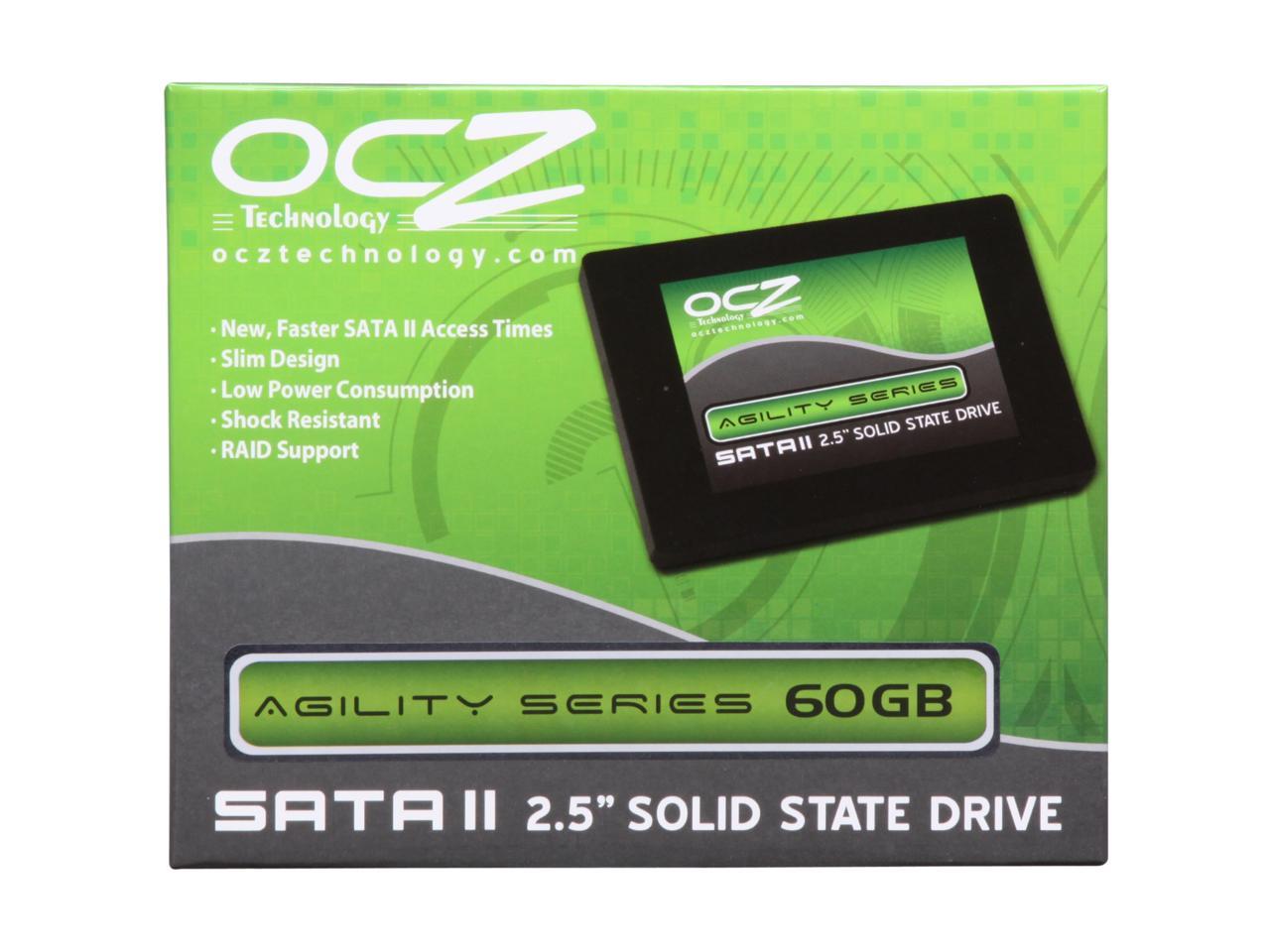 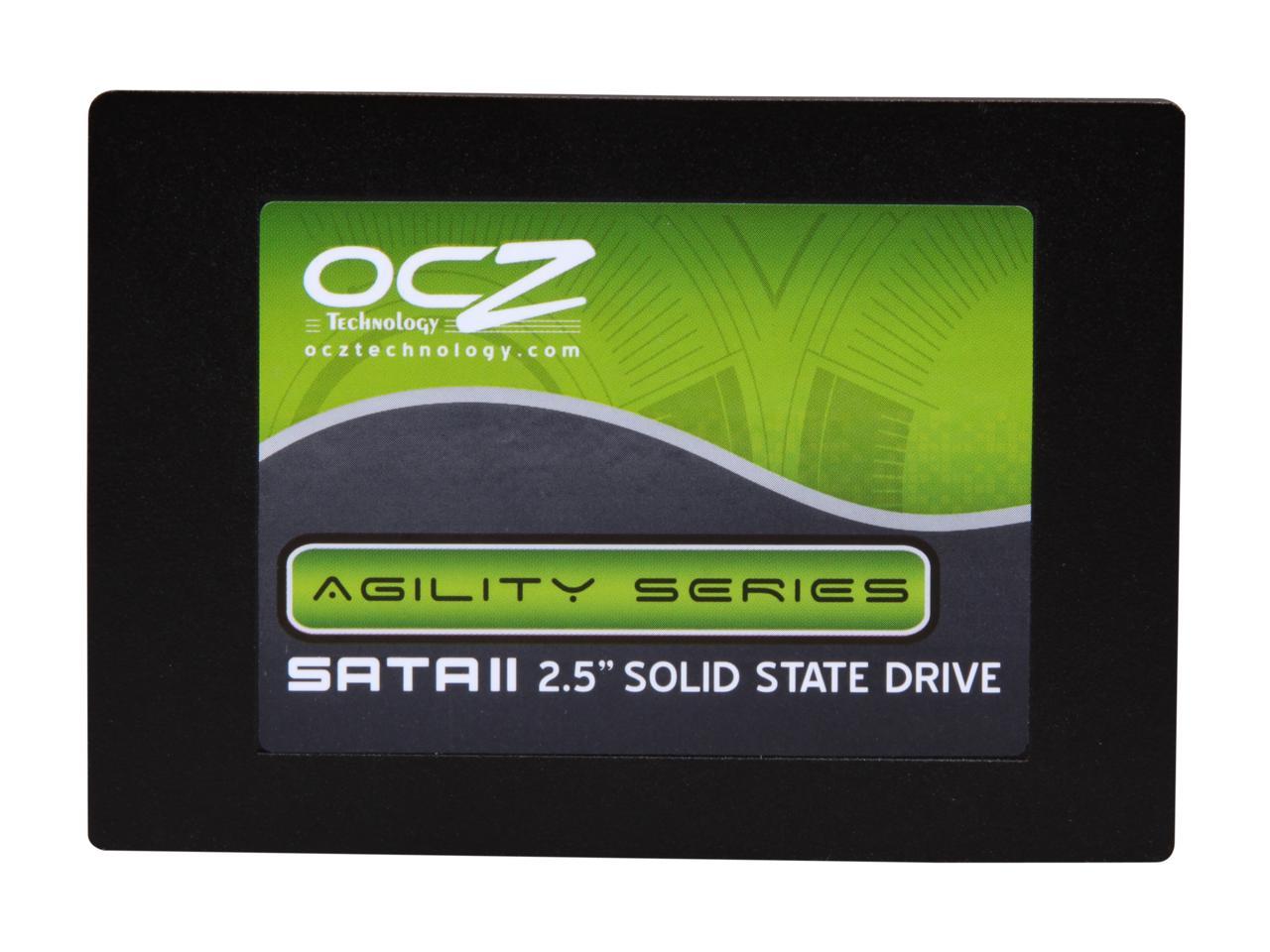 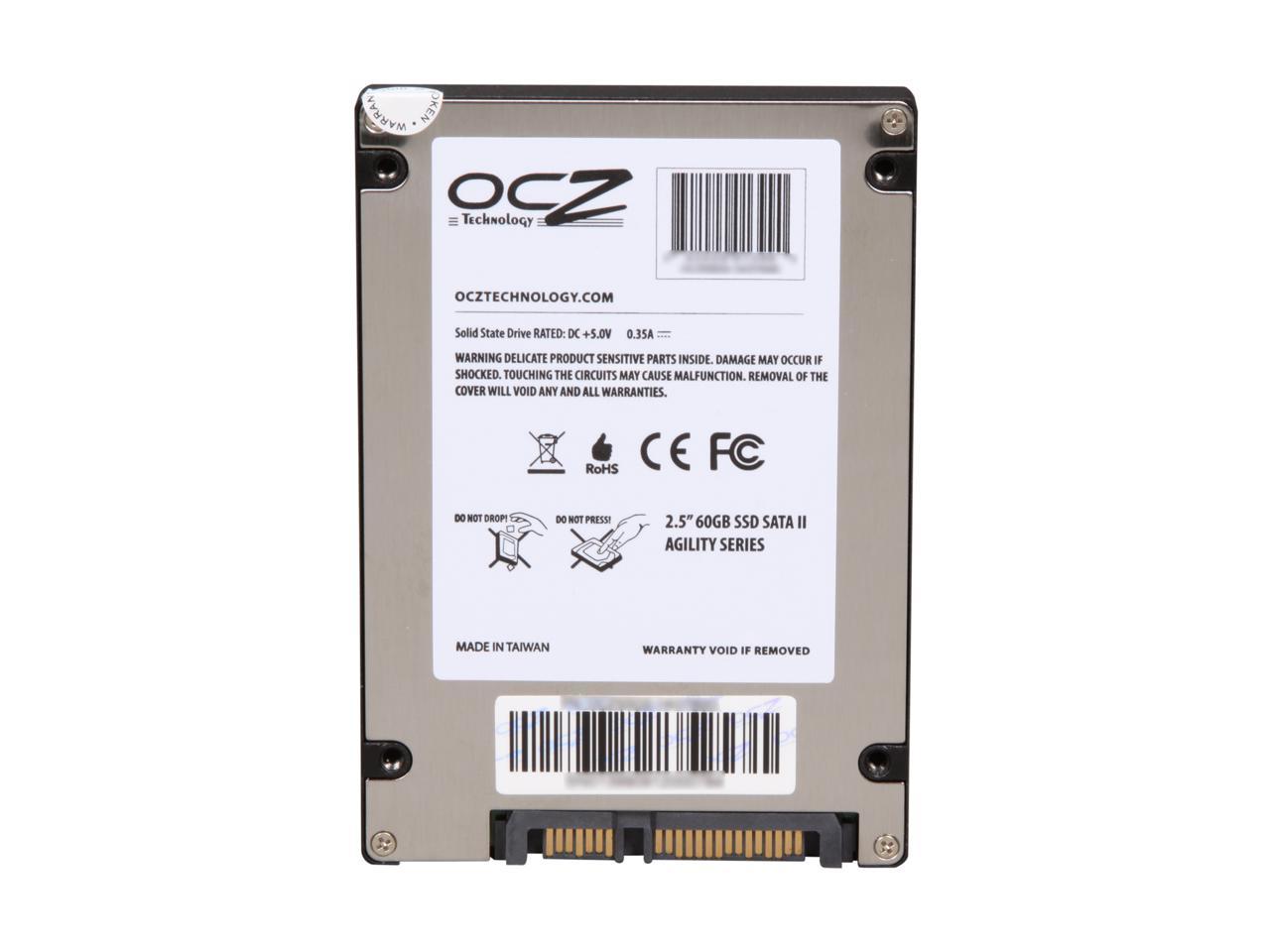 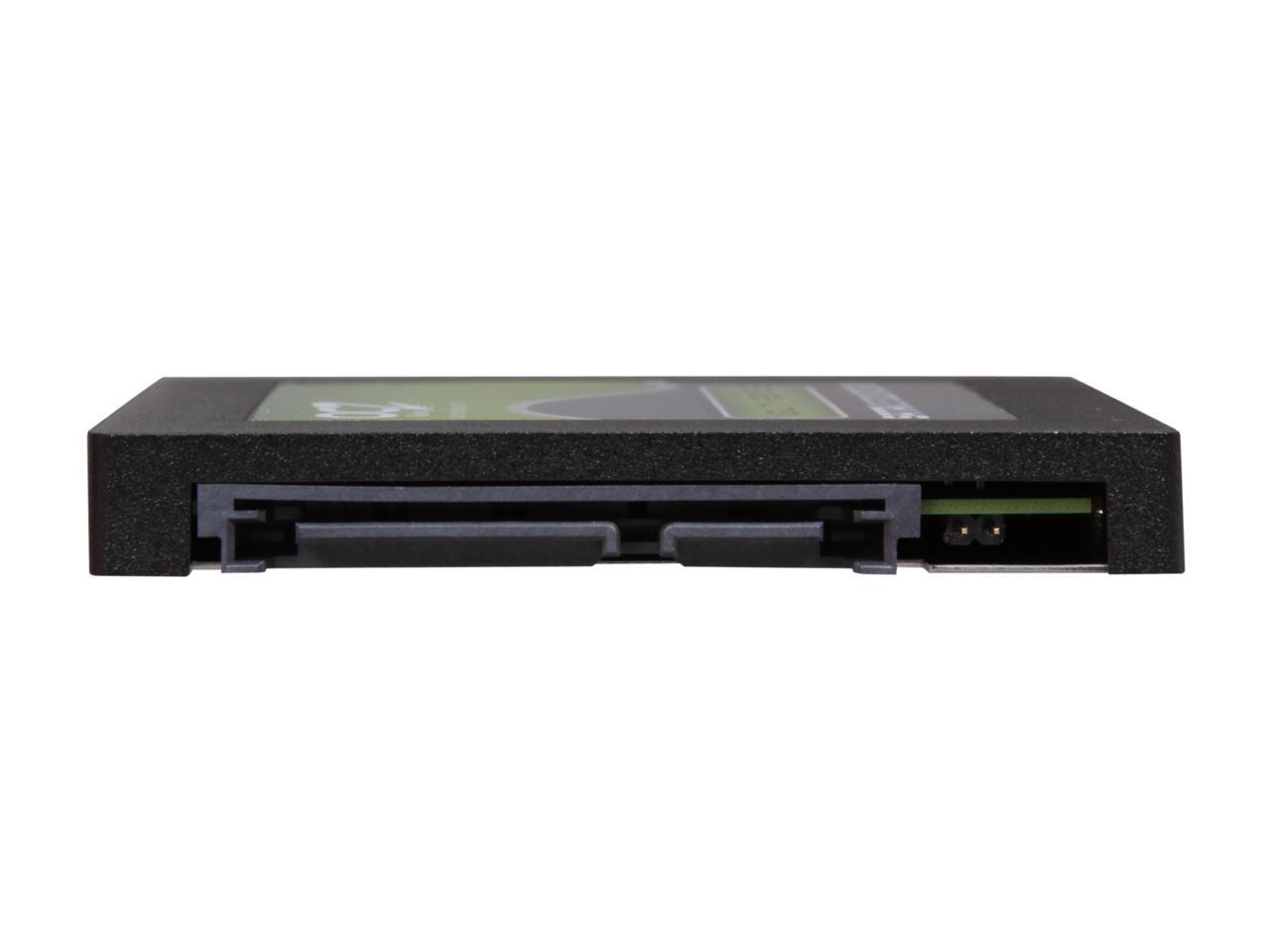 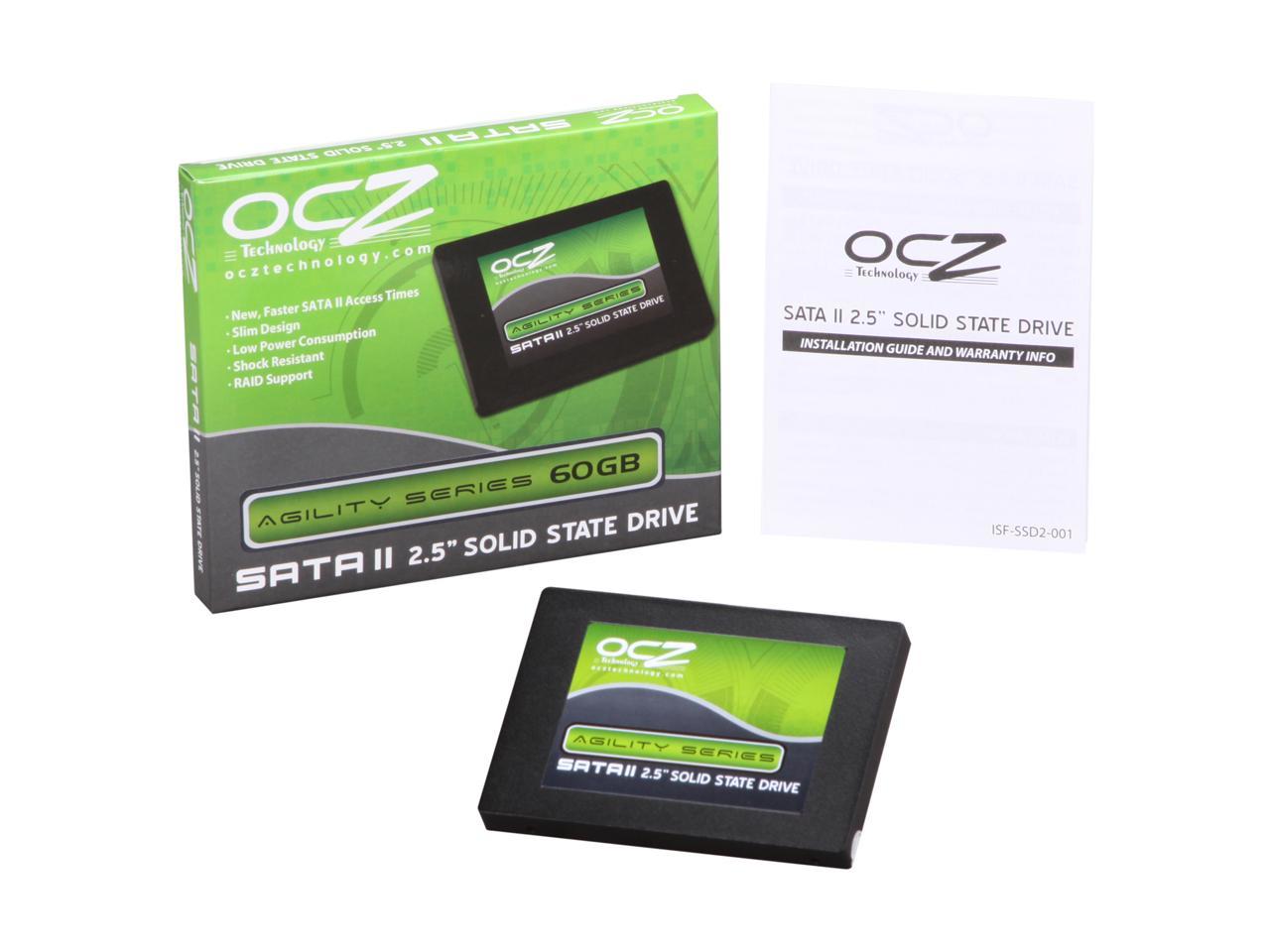 (285) Write a Review
OUT OF STOCK.
Overview
Specs
Reviews
Offering your system the incredible performance of flash-based storage, the OCZ Agility Series delivers the performance and reliability of SSDs at a lower price per gigabyte than other high speed offerings currently on the market. The OCZ Agility Series is the result of all the latest breakthroughs in SSD technology, including new architecture and controller design, blazing read/write speeds, and 64MB of onboard cache.
Perfect for notebooks and desktops alike, the Agility Series is ideal for energy-efficient mobile computing to extend battery life, increase the speed of access time, and provide a durable alternative to conventional hard disc drives with superior shock resistance. High capacities and low power consuming NAND flash technology provide the necessary performance and battery life boosts generated by the proliferation of mobile gaming and new ultra-thin laptops.
The OCZ Agility drives feature a durable yet lightweight alloy housing, and because OCZ SSDs have no moving parts, the drives are more rugged than traditional hard drives. Designed for ultimate reliability, Agility Series SSDs have an excellent 1.5 million hour mean time before failure (MTBF) ensuring peace of mind over the long term. All Agility Series SSD drives come backed a three year warranty and OCZ's legendary service and support.

Pros: See below on install , had it up and running in 20 minutes on clean install. Pretty fast , in win7 64 ult i was getting 180/110 reads and writes on 1.5 firmware it shipped with. OCZ forums full of too much info in too many dfferent places but go read a bit. Windows restarts in 47 seconds , 23 seconds from power on to desktop . Games don't stutter as much and movement seems smoother. Window is much quicker all around so I'm happy with it.

Cons: no documentation , not much info except going to OCZ forums where there is alot of good info , but its not very organized. Read there before you buy and before you install and do some of thr tweaks.

Overall Review: Easy to install on Win7 64 ult , just plug it in and install , do not do custom and format it 1st or it may misalign the partition...just select the drive and install .

Pros: Shipped with 1.5 firmware, which includes TRIM support and garbage collection. Scored a 7.3 on Win 7. Drive is very fast doing anything you ask of it. OCZ forums are a good place to spend an hour expanding your knowledge of the product you just bought and how to make it run like a champ.

Cons: SSD prices are still too high for the average consumer. Things will get cheaper though, just a matter of time. Would be nice if the mounting bracket they sell had free shipping also, but that is getting picky.

Overall Review: Make sure you read up before throwing this thing in your computer. Run it in AHCI mode and get a copy of Win 7 to make the most of this thing, and buy a mounting bracket if you are going to install this in a desktop.

Pros: - Indilinx controller allows RAID. - Two of these drives together cost close to a single 120GB SSD, while having performance (in RAID-0) that beats by large margin just about any 120GB SSD drive on the market. - RAID-0 so darn fast, it takes longer for the motherboard to POST than Windows 7 to boot.

Overall Review: When I got the drive, its price was noticeably less than Vertex's. However, if current price is close to Vertex, get Vertex - it's just like Agility but, with *slightly* faster Samsung flash memory chips. (OCZ, you have to sell this one for less than Vertex!!) RAID-0 functionality of Indilinx-based drives may soon be improved by two changes in the software: - Upcoming firmware updates that will have background garbage collection, preventing degradation of MLC drives' performance. - Intel Matrix Raid driver needs to pass through ATA Trim command from OS to SSD drives in RAID. Currently it seems to pass Trim only to non-raid SSD drives.

Pros: As expected from a quality SSD, it's fast TRIM functionality

Overall Review: There's not really a whole lot to say that hasn't been said about SSDs. The cost per GB is naturally high, given the relative newness SSD technology compared to its platter counterparts. You get what you pay for, though. Only the buyer can decide if a lot less GBs is worth the significant increase in speed (especially if you are using a standard 7200 RPM drive). If you're a laptop user, you'll especially value the SSD's lesser power consumption and light weight a lot more than desktop folks. Note that this SSD does NOT come with an adapter of any sort, nor is it advertised as coming with one. Plan on buying one if you want to properly mount the drive.

Pros: "did exactly what it said on the tin!", great speed improvements under w7, at least a 25% performance gain on apps and the operating system itself. Very stable, no stalls, crashes, missing files etc.

Cons: Would have been nice if it came with a mounting kit to get it snug somewhere in the case, that was my only snag. Otherwise it's just how I like my hard drives - quiet, and hassle free.

Overall Review: A lot of people get put off by only 60gb of storage. I keep just the OS and MS Office on the main drive, and my most frequently played games, everything else goes on a 1tb 7200rpm drive. The combination works perfectly, and I still have 15gb free on the SSD. Dont think 60gb isn't enough to get a performance gain - it makes a huge difference.

Pros: Made my PC faster and quieter. Just the right size to hold a Windows install and several apps.

Cons: Windows Vista does not support TRIM. This is not OCZ's fault. This drive does implement garbage collection which helps work around the missing trim issue. Also, it would be nice if either OCZ or Microsoft provided an automated way to move frequently-written system files to my hard drive while keeping read-only files on the SSD. Or maybe I'm just too obsessive.

Overall Review: Never mis-underestimate the value of good customer support. OCZ has a good web site that provides a lot of helpful information. Not perfect, but far better than the competition.

Pros: This drive is fast to be sure when compared with similar offerings and of course with mechanical drives. RAID is more trouble than it's worth in my opinion for most users. TRIM is a must in my opinion for all Win7 users, especially if you are planning on doing writes and re-writes quite often.

Cons: Not many. Physical size is actually a con for desktops since you have to buy an additional bracket but it's not too bad unless you have drive rails like mine that are only designed to handle the larger drives. I had to modify them for the drive to mount.

Overall Review: Great drive if you can find it for under $2xx and in stock! I don't know why so many people have problems with the rebates. They are slow that is just a fact of mail in rebates.

Pros: Faster then the OCZ solid drive it replaced. uses the Indilinx controller vs samsung on the OCZ summit. great transfer speeds for the price per size. running two agility's in raid-0 setup, no compliants with them in win7. just make sure that with vista or win7RC you are aligning the drives for best performance.

Cons: only con is it wasnt a bit more cheaper.

Overall Review: You could really consider the Agility drive over the summits. the only thing going for the summits is the 128mb of cache. which helps but not as much as you think it would. if in doubt read the reviews of SSD's at benchmarkreviews.