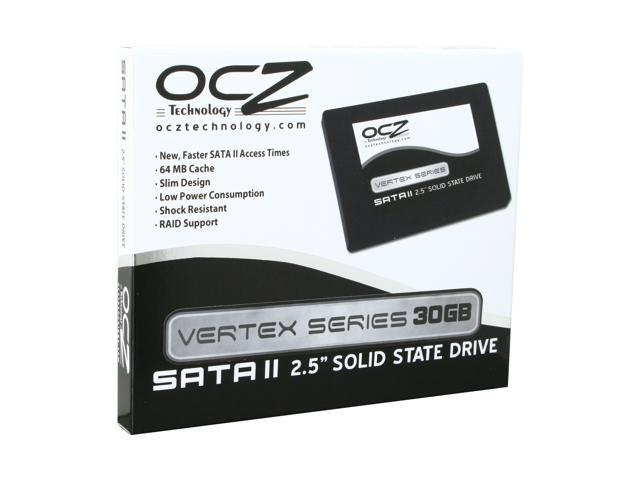 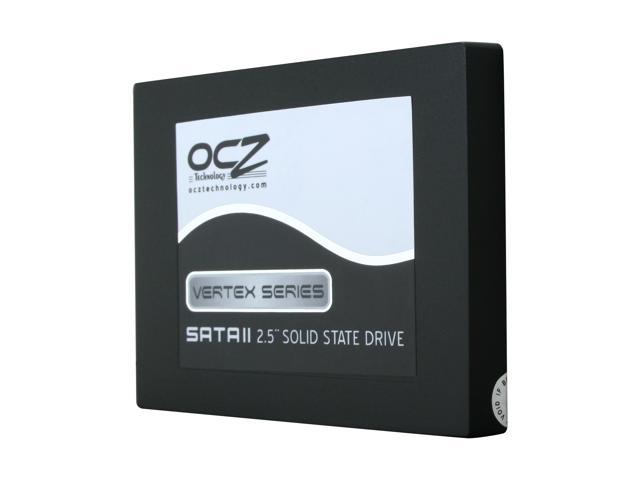 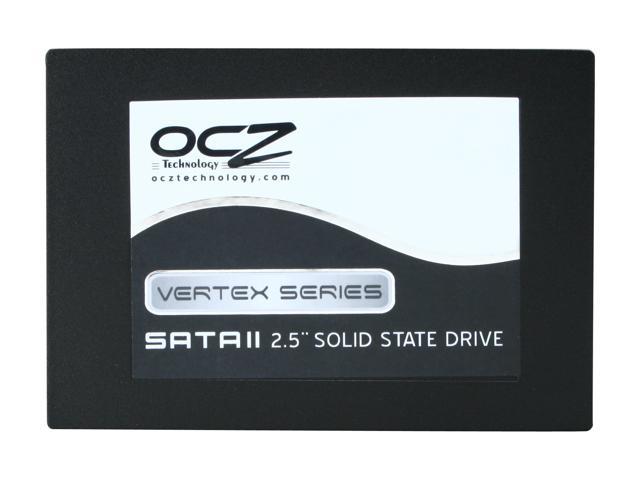 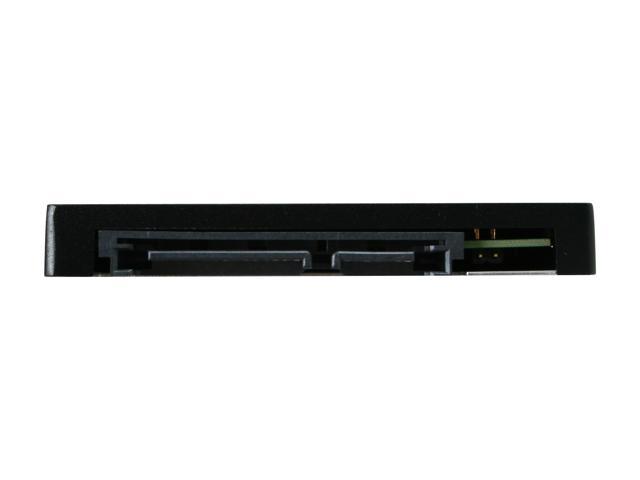 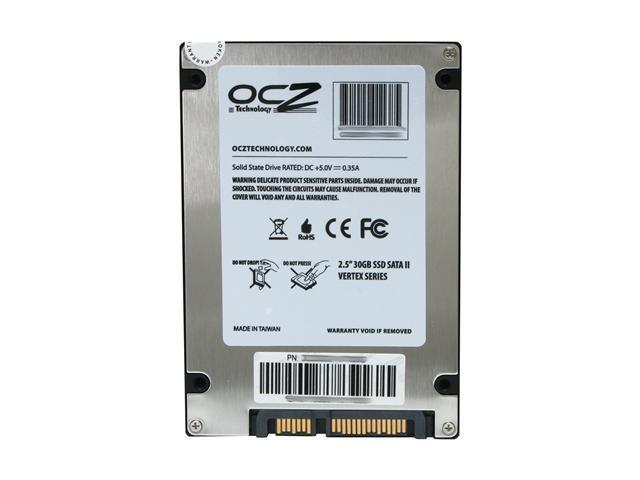 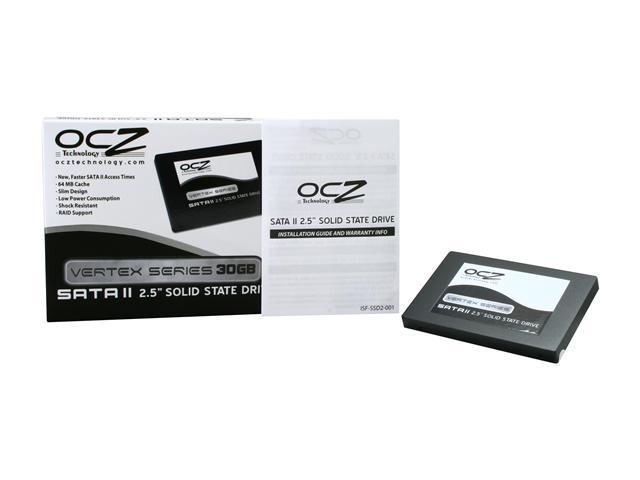 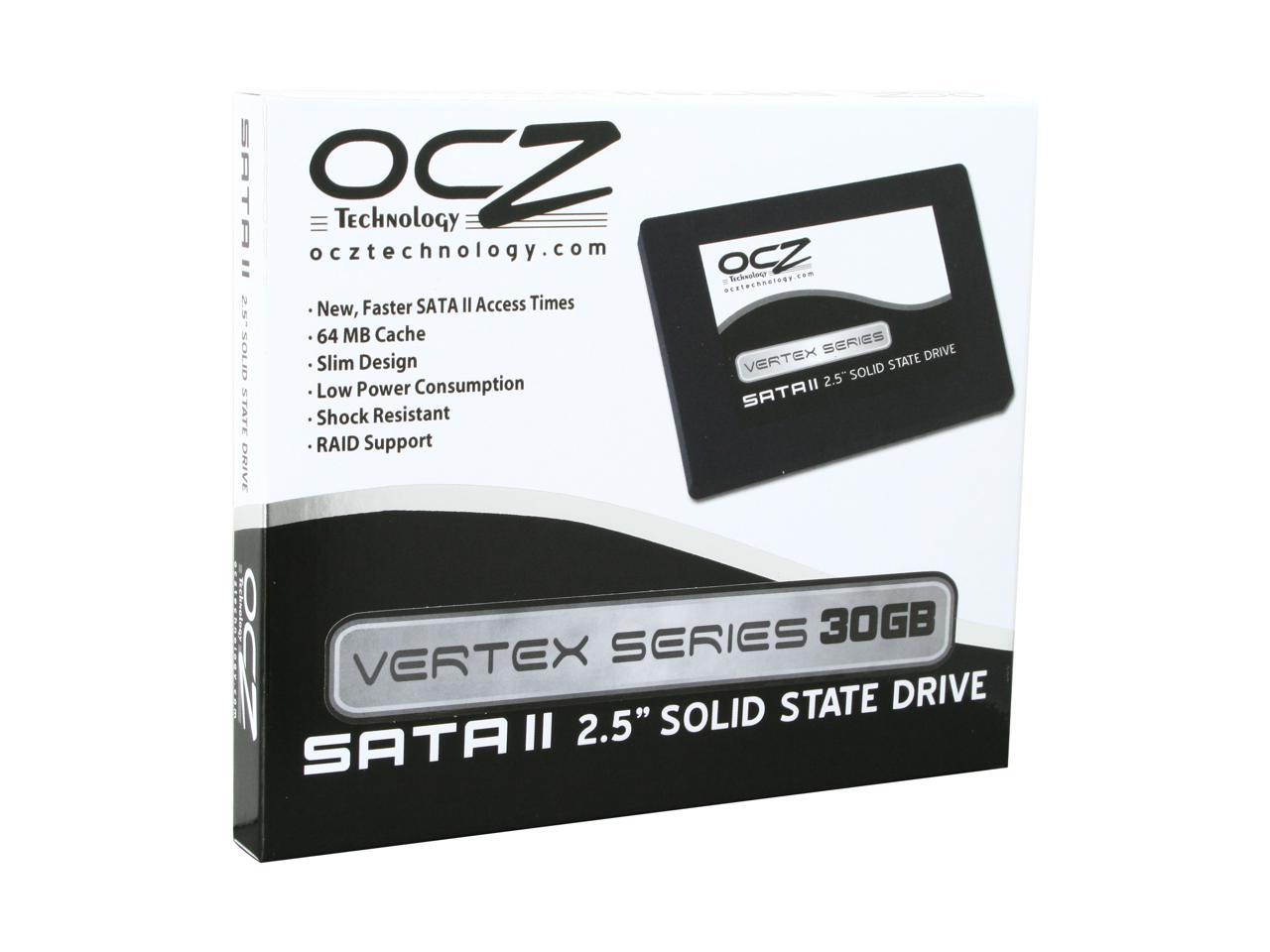 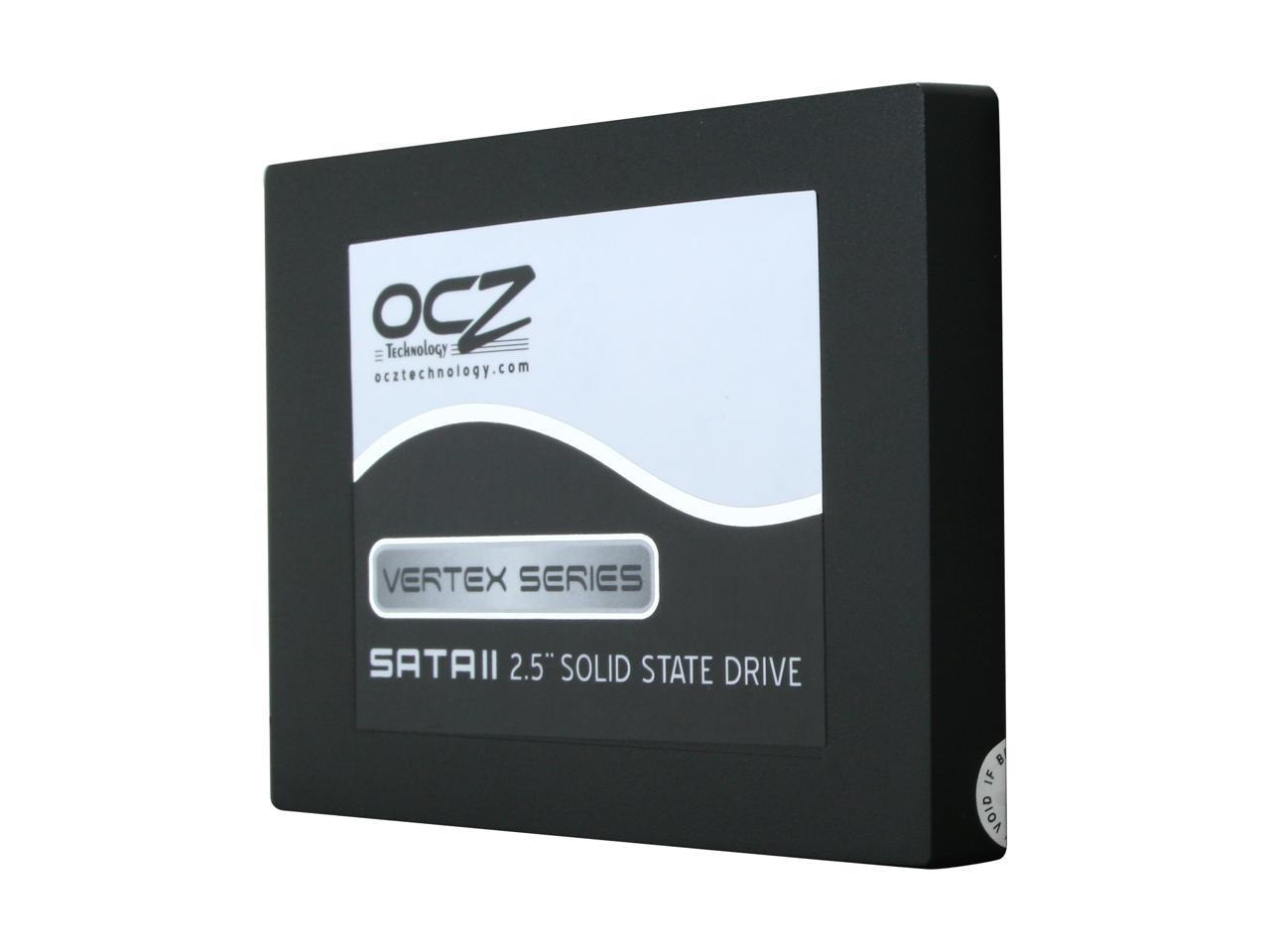 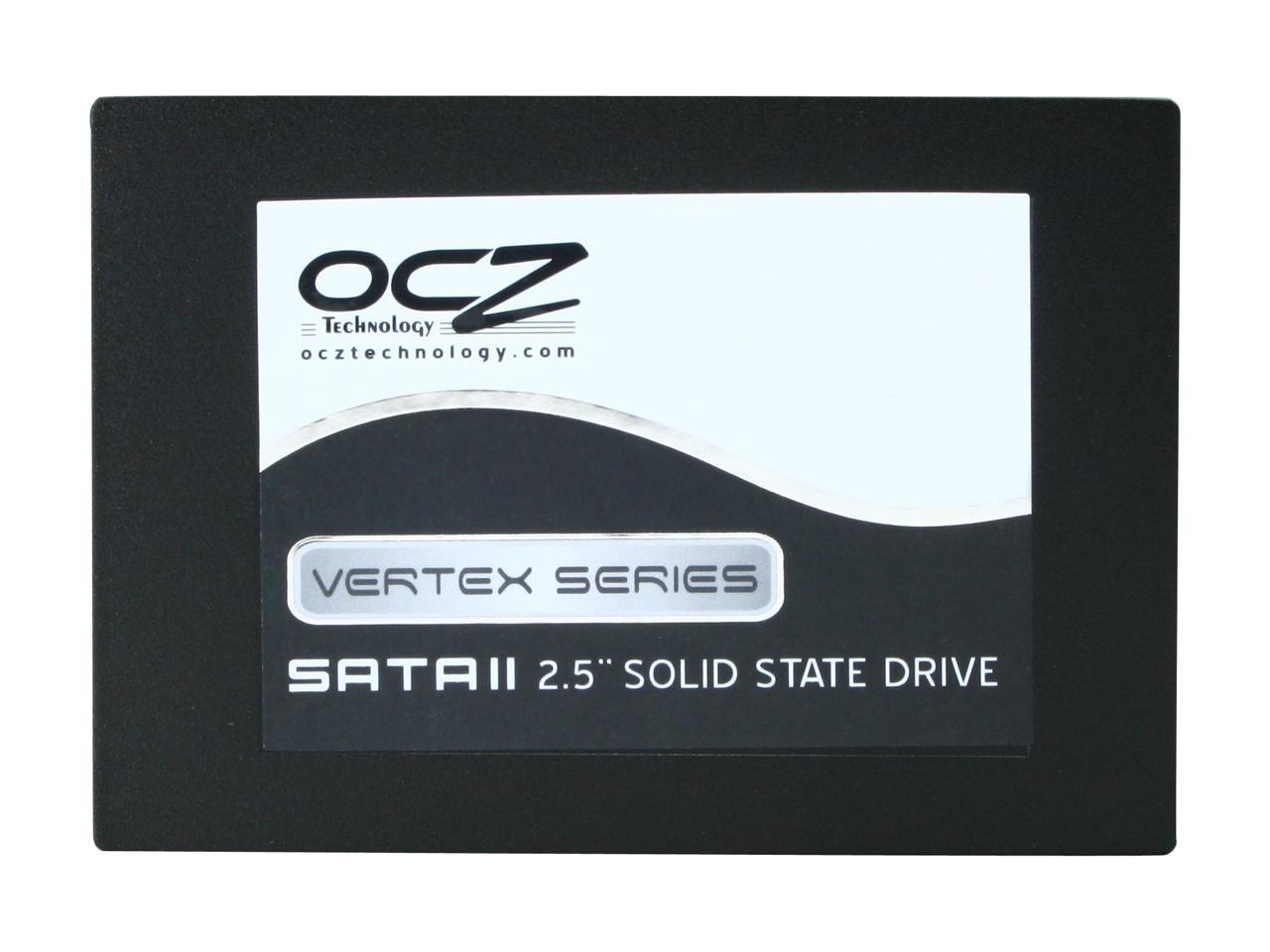 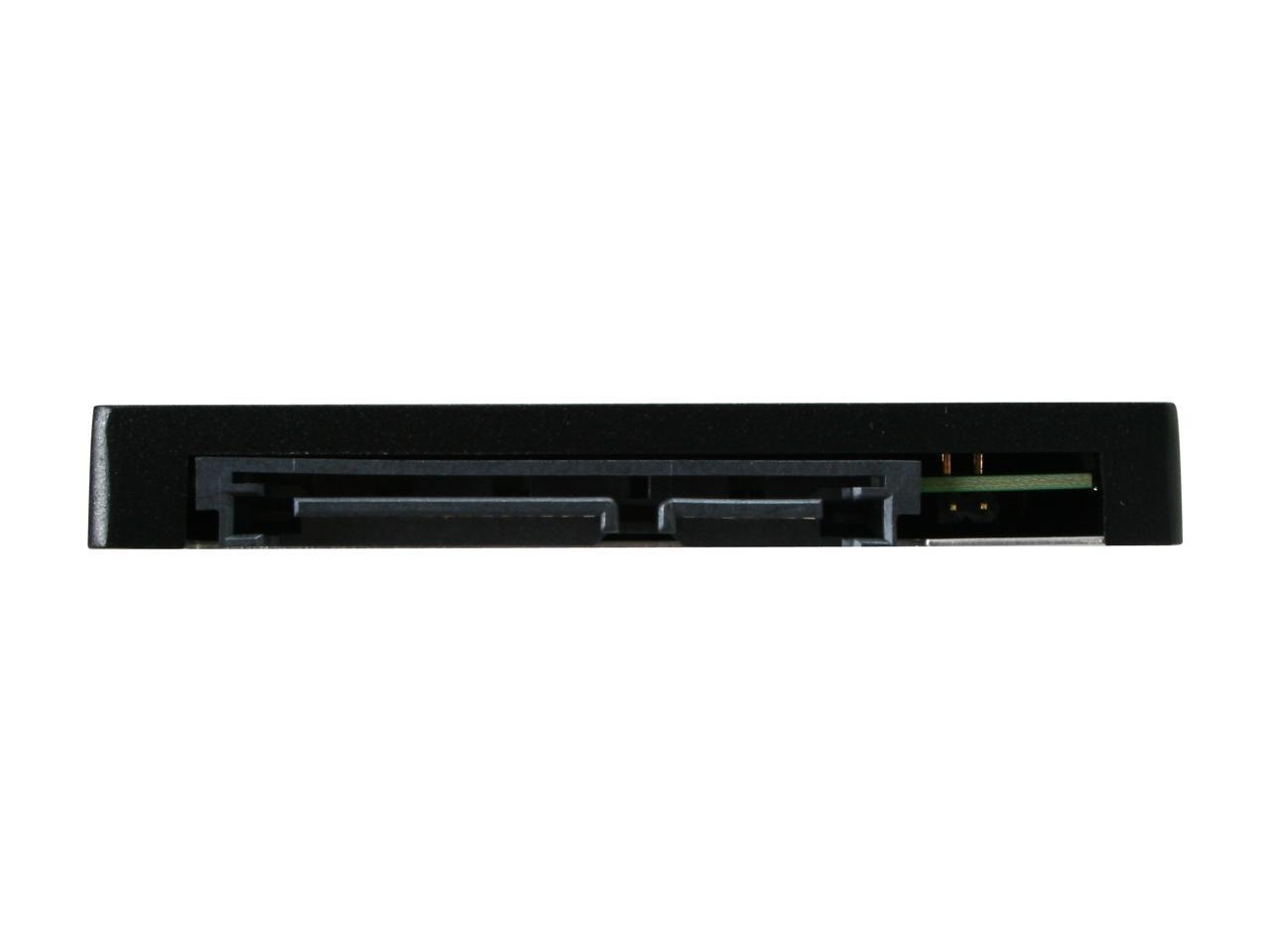 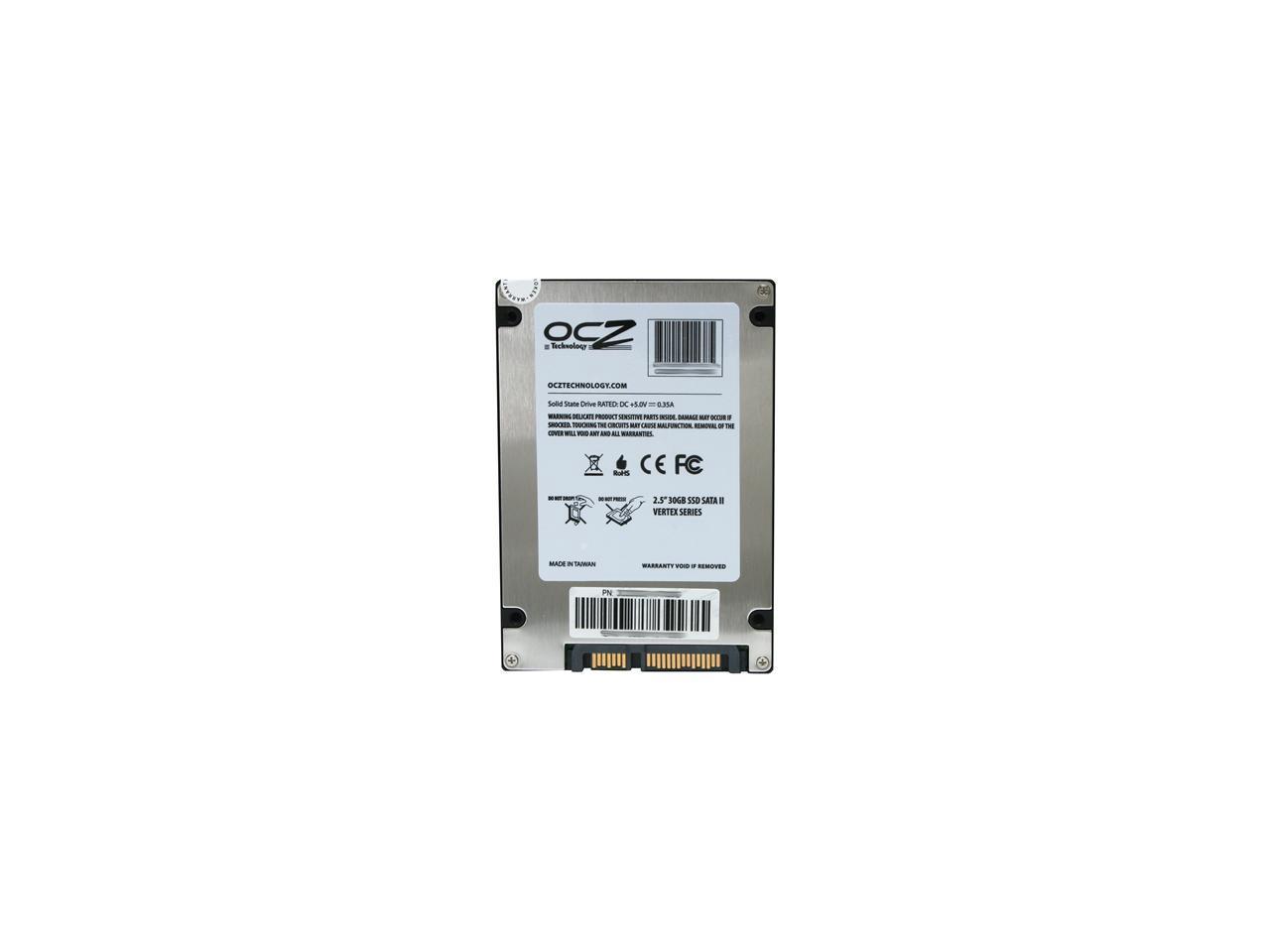 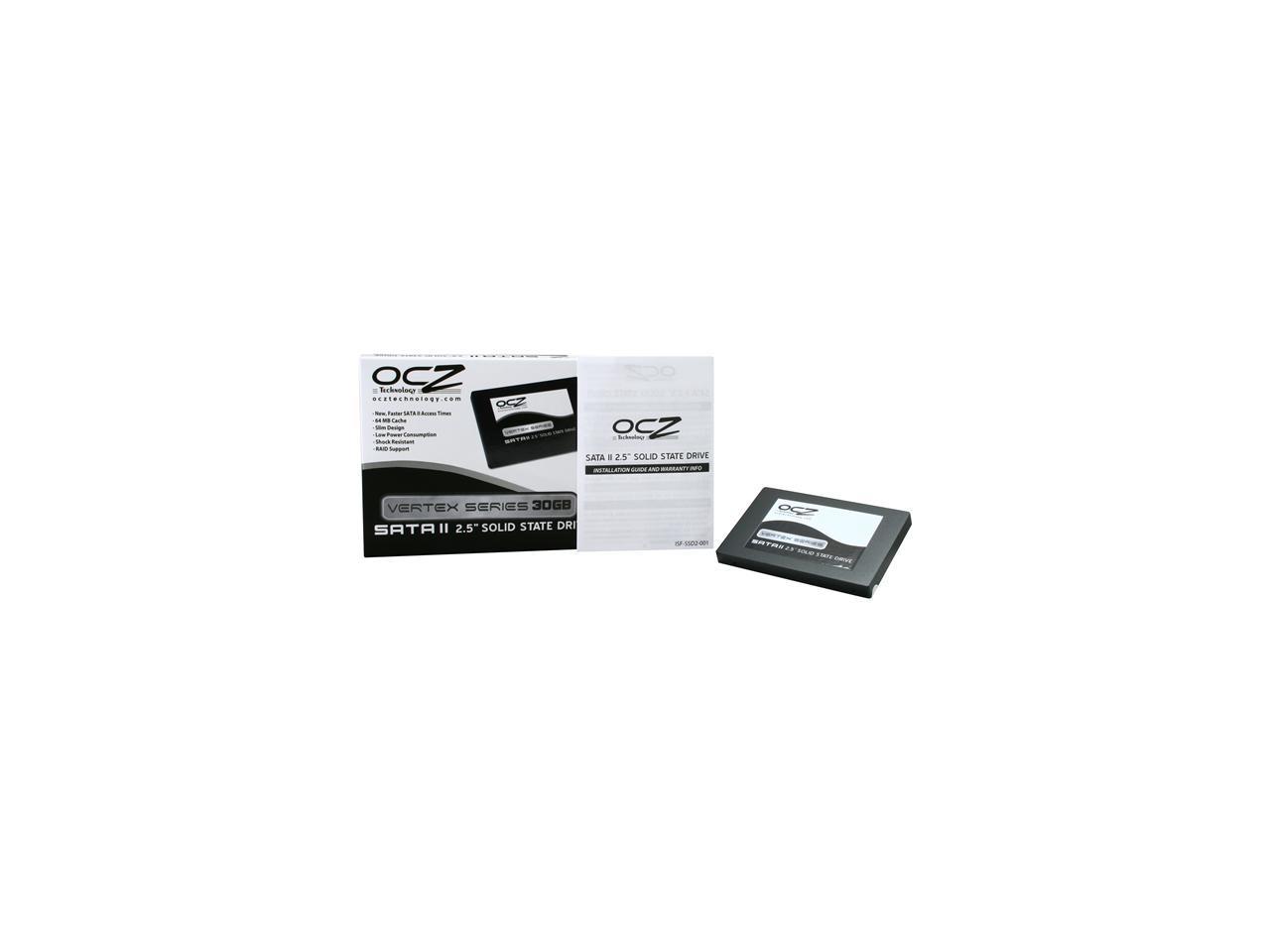 (625) Write a Review
OUT OF STOCK.
Overview
Specs
Reviews
Ride the next wave of Solid State revolution with OCZ. The OCZ Vertex offers your system the incredible performance and reliability of flash-based technology at a price that won’t make you wince. The Vertex series is the result of all the latest breakthroughs in SSD technology, including the latest-generation architecture and controller design, complete with 64MB of onboard cache to offer faster transfers and superior overall system response times.
Packing a massive 30GB of storage and low power consuming NAND flash technology in a compact form factor, the OCZ Vertex OCZSSD2-1VTX30G is ideal for ultra-light laptops to extend battery life, increase access time, and provide a durable alternative to traditional HDDs with superior shock resistance. Using the SATA II interface makes retrofitting this 30GB solid state drive into a laptop a breeze.
Nor is it limited to laptops: any system that needs to be physically rugged, or have a silent drive with low power requirements would be happy to get one of these. Just imagine the possibilities with Vertex!

Pros: First off, I'm an IT Administrator of 8 years. I purchased 2 of these for a RAID 0 setup on a gigabyte board with intel onboard raid, and the performance is unreal. Getting 440mb/sec reads with .1 latency - Windows 7 loads to desktop in seconds, and shuts down even faster. I will be purchasing one more ASAP to add a 3rd disk to my stripe - 660mb/sec reads....

Cons: absolutely zero. Those of you looking at this drive from a price per gig perspective have got it all wrong. These drives are not for storing your data(personal files/mp3/movies/etc.) They are for holding your OS and program files. When you look at the drive in that sense, it is well worth the money for the performance increase you get in return. Only minor con is these aren't too friendly with nvidia onboard raid - but it's nvidias fault not OCZ. I switched to gigabyte and couldn't be happier.

Overall Review: For those of you with ~Q6600/etc. thinking of upgrading to an i7 setup, seriously consider 2-3 of these instead! The hard drive is by far the biggest bottleneck on a machine - 3 of these in RAID 0 offers a HUGE performance increase over traditional drives.

Pros: Its fast, VERY fast, and doesn't have the stuttering problem that the JMicron based controllers have. Windows boots EXTREMELY quickly with this, programs launch immediately upon opening them. Its finally living up to what SSDs have promised.

Cons: - It doesn't quite meet the performance bar set by the Intel SSDs, but its also a fraction of the price so its hard to compare the two directly. - You need to upgrade the firmware if you get one with the 1199 firmware loaded on it, and that upgrade will destroy any data already on the drive. (Also, there's no Linux / MAC firmware tool, so you'll need a PC with XP or Vista)

Overall Review: As soon as you get this drive, check the firmware revision on it (it will list it in the name of the drive in the BIOS). If its 1199, it has a bug in it that will cause the drive to start showing errors in Windows once it gets near full. Google "OCZ Vertex Firmware" and you'll find detailed instructions on upgrading to the newer 1275 firmware. Its not terribly difficult, but you will lose any data you've already put on it. The good news is that the firmware also fixes a bug that wasn't allowing the drive to write data as quickly as it should have, so now the drive is even faster than before.

Cons: Still expensive per GB. Firmware not final yet - they already have three out and new coming soon. TRIM function should have been implemented when these were first introduced. Performance drops 1/2 when OS installed and about half full. I'm still keeping it as primary OS+Apps drive - nothing bits it per $.

Overall Review: Needs proper alignment and partitioning. Requires some tweaking in MoBo BIOS and OS. Make sure on ICH9/10R to enable RAID mode even if disks are not members. This will allow to install Intel Matrix and enable write back caching - this is the key to fastest possible performance.

Pros: Oh where to begin... I read the reviews and it convinced me to buy. I put two of these into my machine and configured a Striped RAID, benchmarked using ATTO (a previous user recommended it). I really am getting 310MB/s Write and 360MB/s Read. Everything opens almost instantly; Browsing is much faster; Startup has been sped up ~300%; No noise; No heat. Without the RAID these are much faster than my existing SATA II HDD's so I was tempted to put one of these in my system and the other into my laptop, but after seeing the speed almost double in the RAID my mind was set. I don't know if you noticed, but these drives have 64Mb built in caching which eliminated the problem of any 'stuttering', Buy them, you want to need them.

Cons: Shipped with an older flash, after flashing to the latest (right now 1.10) bios, the SSD's ran without any issues. Price: you are going to have to take a hit / Mb for the speed. I still use my Large HDD for data storage.

Overall Review: They do not fit into a standard case unless you buy the 2.5" to 3.5" conversion rails. I think ten doll hairs is too much to pay for what should have been included.

Pros: I love this drive. Even though it's a laptop form factor, I purchased it for my AMD Phenom quad-core desktop. I've followed the suggestions at the AMD forums, and I've had no issues at all with this drive. This revision was supposed to have solved earlier issues with stuttering in Windows, and it certainly has appeared to do that, as reviews elsewhere indicated before I decided to purchase it. I typically love OCZ and have multiple types of computer HW from them. When higher capacity drives come down in price I will move this one to my laptop and buy a larger capacity for my boot drive. I will be updating to Windows 7 when it is released (have my pre-order in at Newegg), and supposedly W7 has native support to manage SSD drives, which could eliminate my cons below, and the 4 stars I gave it would become 5.

Cons: (As of a few months ago.) Requires some web browsing at the OCZ forums to set up properly. OCZ is relying too much on community support to provide their knowledge base documentation. They really need to publish an official setup guide. They rely on information spread across "sticky" threads, which they could easily collect into a definitive guide which doesn't require hours of scanning through threads with dozens/hundreds of posts to get bits of valuable information. Their "wiper" software has little documentation. Windows 7 may eliminate the need to go through that time-consuming process.

Manufacturer Response:
Hello, we are pleased that you are happy with your drive. We are always looking to improve our online support, and we want to thank you for your suggestions.
erica s.
Ownership: 1 month to 1 year
Verified Owner
Flaming Vertex Issue11/14/2010 9:50:07 PM

Pros: worked well for a period of time.

Cons: there is an issue with these drives and power issues, even after a period of time. After a period of use one day three of my drives on the same power cord fried, one almost catching fire. The PSU manufacturer tested the PSU, and said that an overvoltage cause by one bad SSD caused the failure. OCZ refused to even look at the products. The PSU manufacturer did a detailed investigation, with very extensive tests, pictures, and descriptions of the tests that they ran on the PSU. OCZ told me they would not even look at the devices, and these drives were under warranty!

Overall Review: Ocz initially denied that they had ever had an issue with drives smoking/arcing and frying other components. After posting on a forum, it brought forward another event where a customer had several drives fry on his computer, and OCZ had granted a RMA. however, they refuse to even look at these devices. terrible service. they denied RMA without even asking for details of the incident at hand. One drive failed, smoking and arcing and almost catching fire. enough smoke to fill a room at my house! Very dangerous! Its failure caused two other drives on the same power line to fail, however they did not fry. This is not the only case of bad devices being refused RMA by this company. there are more forum postings than i can count documenting terrible customer service, and drives under warranty not being accepted for RMA. my drives were under warranty, failed catastrophically, and were denied RMA without the manufacturer even looking at the devices.

Pros: It's faster than the usual drives I'm used to, but it's doesn't blow me away. I understood this before I bought it so my expectations were realistic, which is why it gets 5 stars instead of 4. It's the little things that are so nice, like applications opening without lag or delay. And it's so small! I had not seen a SSD before I opened the box and was amazed at it's tiny stature. Now, you get the drive ONLY. No SATA cable nor 3.5" mounting converter, so plan ahead for that. All of my drive bays are filled anyway, so it's resting safely at the bottom of my case. 6 TB of storage and a little 30 gigger running the show. Feels good.

Cons: The lower capacity means it's affordable but it's kind of a drag having to constantly remember when installing software to not go along with the default drive and path because I have to install games and software on secondary hard drives, although there's enough space for the game of the moment and most demanding apps, like browsers and MS Office. But I'm constantly paranoid about the free space available. I think I'll order a chill pill next.

Overall Review: It's a 100% certainty I'm going to pick up another one the next time the price dips and set up a nice, if tiny, RAID 0.

Pros: As expected, the built in cache and non JMicron chip helps with I/O stuttering. Everything else works as advertised. Fast read/write/access speed. Pretty much perfect as an OS drive for pc enthusiasts.

Cons: Not really worth it if you are not after the amazing access time. Once windows boots up, you will not notice too much speed difference unless you open up programmes like AutoCAD or photoshop

Overall Review: Don't buy it if you are just buying into this SSD hype. This cost a lot of money, I sincerely hope you think twice before you purchase this product.