Purchases from these Sellers are generally covered under our Newegg Marketplace Guarantee.
9,085 Ratings (91% Positive)
Shipped by Newegg
Sold by: 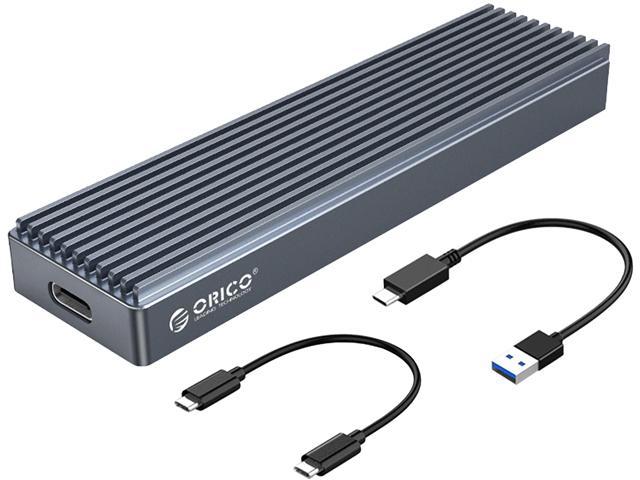 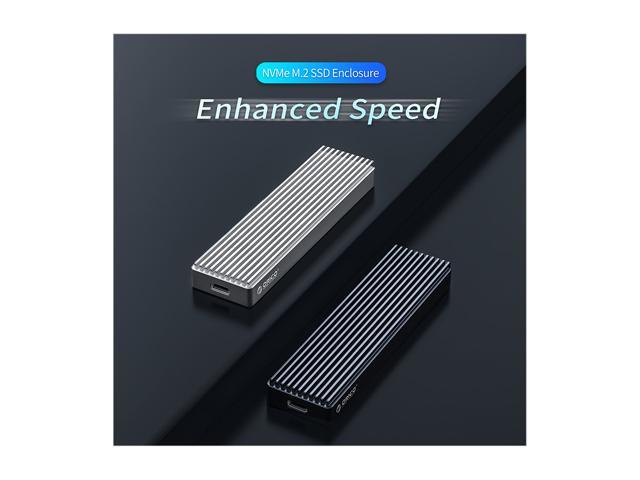 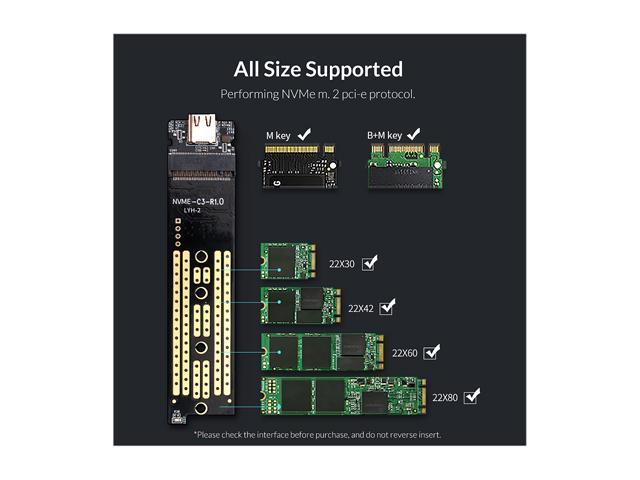 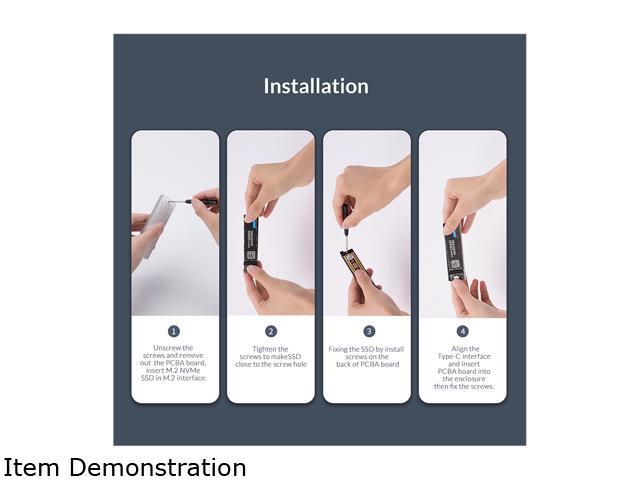 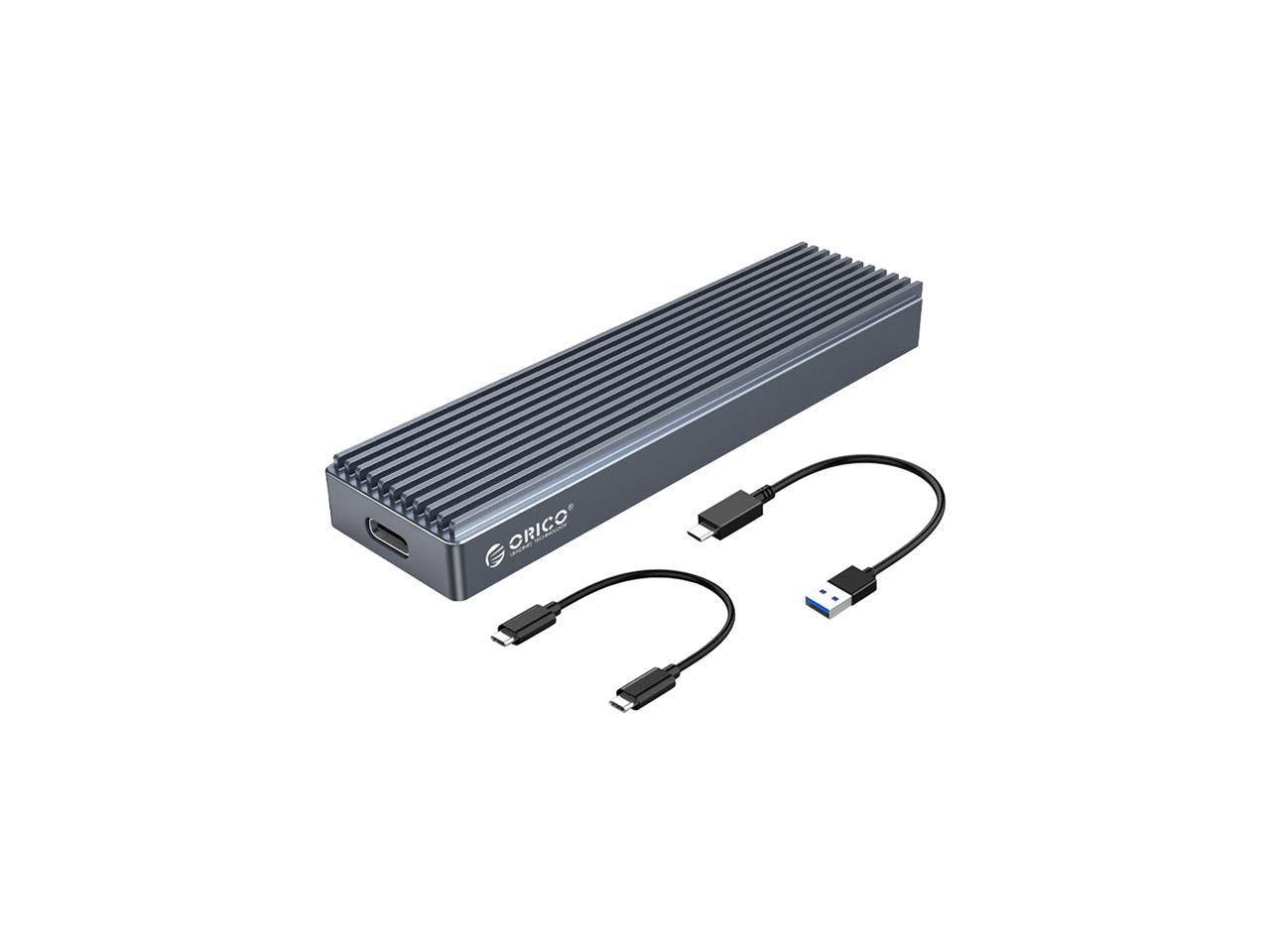 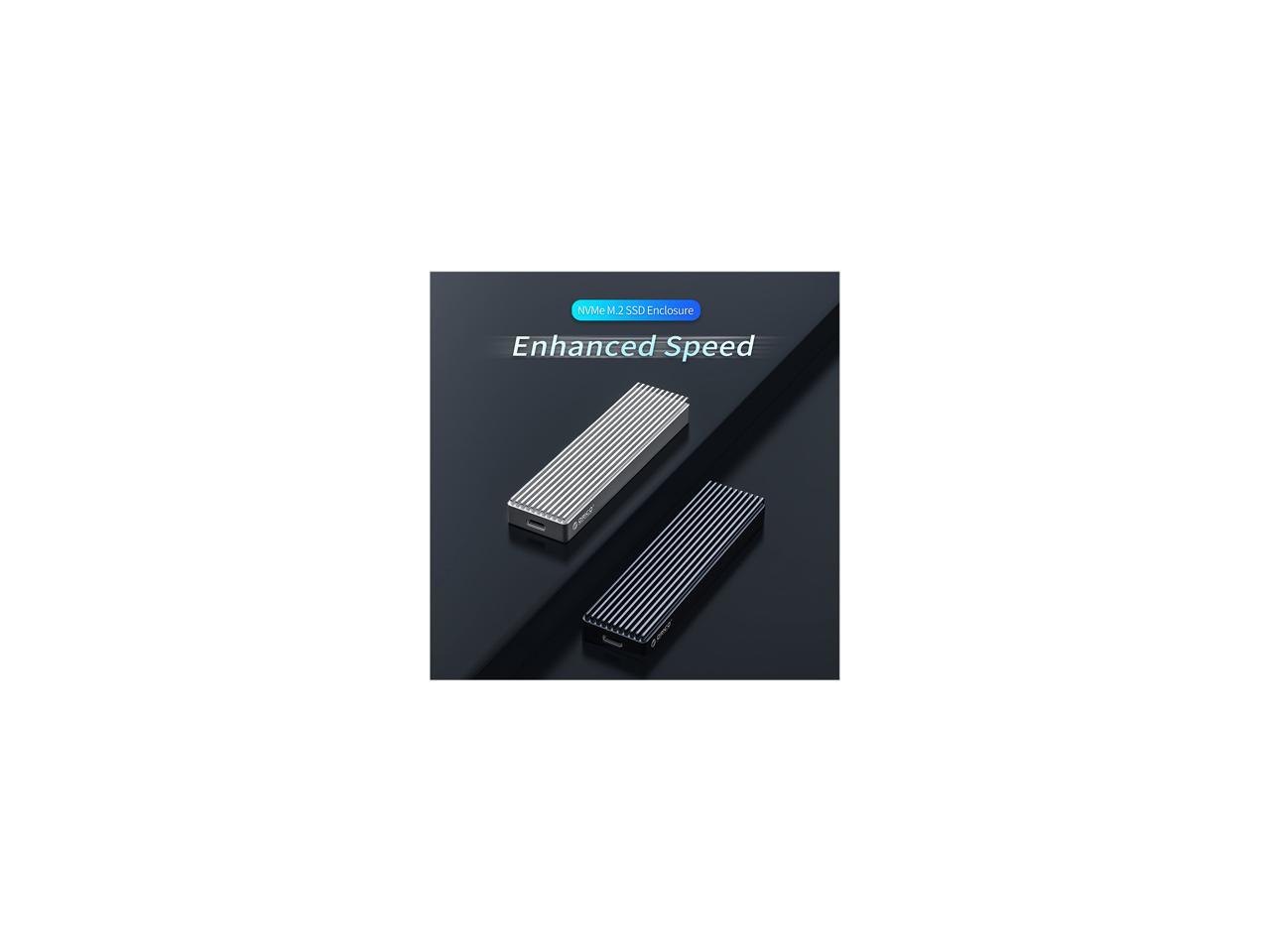 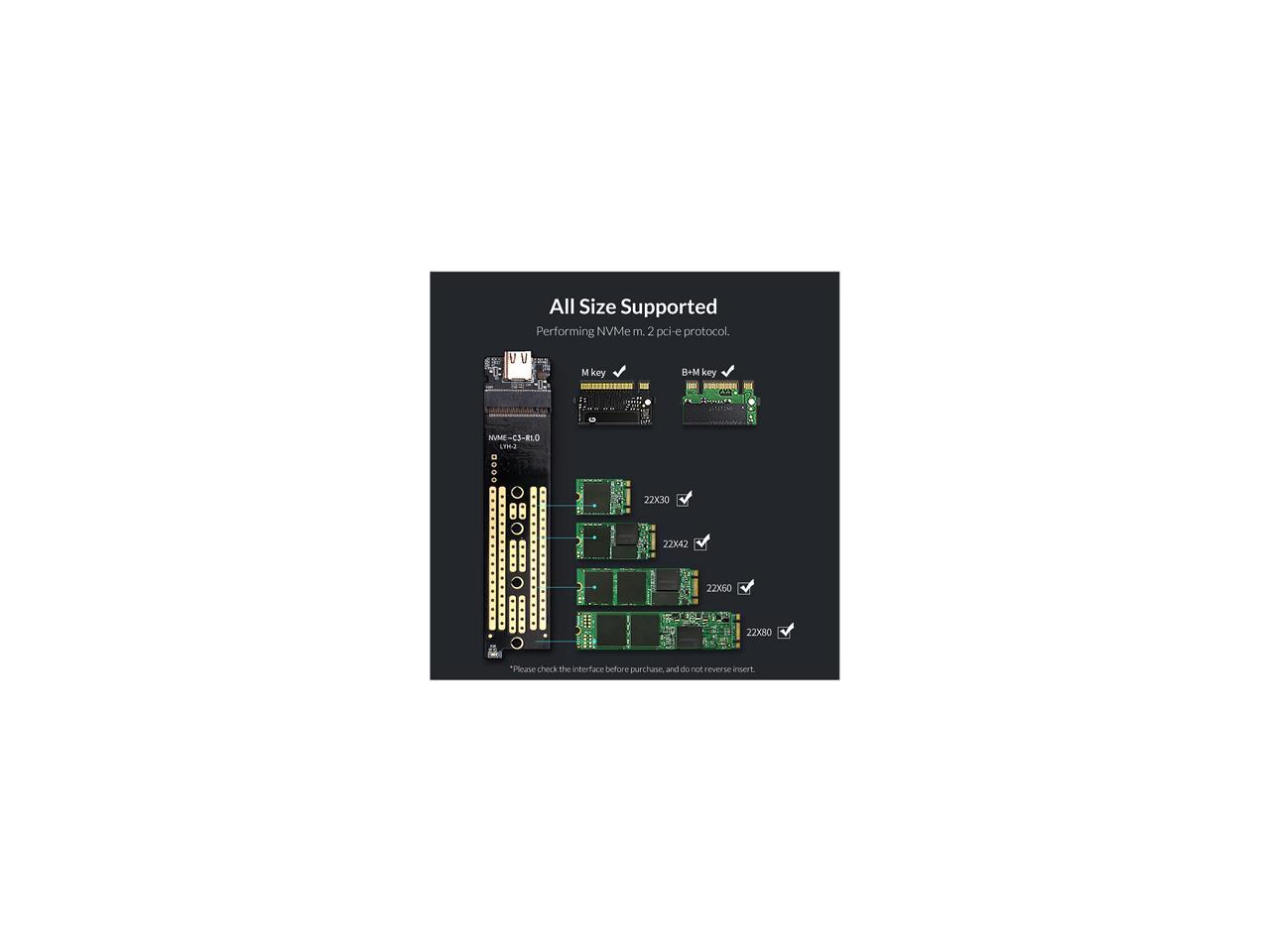 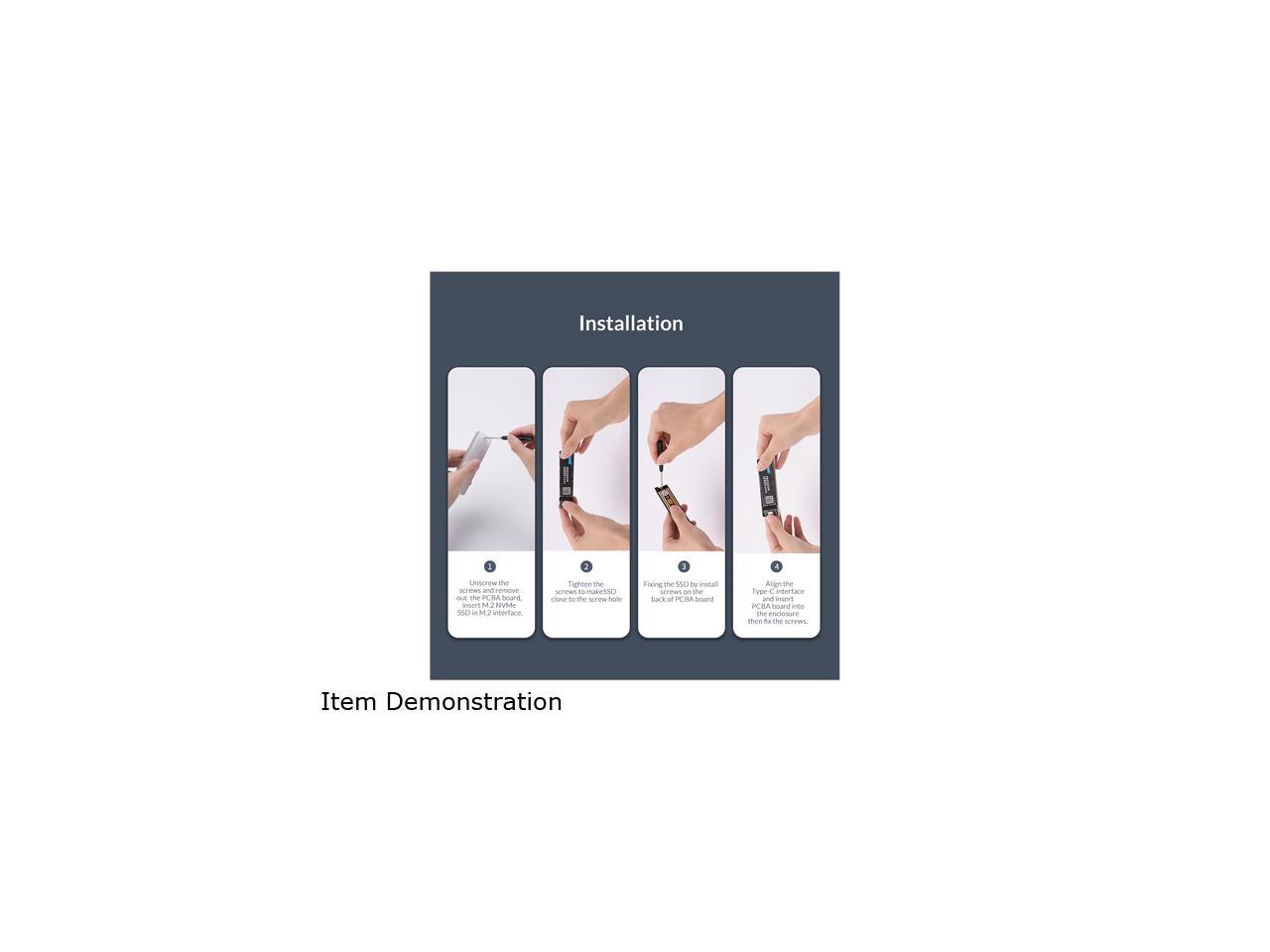 SLEEP MODE: It will automatically enter into sleep mode when there is no operation within 10 minutes. This helps to prolong the service life of your hard drive.

EASY TO USE: Hot-swappable, Plug & Play, No Driver required. And you can use it widely on computers and Android phones(Android device should have USB-C port and supports OTG)

3. It is normal that the aluminum case heats up, for the high-speed NVMe M.2 drives generate much heat while working. Enter sleep mode automatically after left unused for 10 minutes, it can prolong the service life of SSD. The master controller support UASP protocol, transmission speed is faster and more stable. and just plug and play with no driver needed, very easy to Use.

Pros: Seems to work well, but I've only had an Intel 660p SSD (1TB) installed for a few days. Have not measured performance. Active but Idle, it wasn't too warm. I'll touch it under load sometime. I liked the auto power down feature as I'm using this in an always-on but power-sensitive application. Assembly (except thermal pad) was described OK and it went together smoothly. I didn't lose the hardware but could see that it's easy to do (tiny). Including the Torx tool was a real plus. I had to use a nut driver on the tool to get enough torque to removed the case screw - scary.

Cons: The included thermal pad didn't adhere well. There were no instructions regarding it. One picture I found on the vendor's site showed it on the removable plate. So I put it there but was not convinced it had contact with the PCB. As others have said, the parts are small.

2 out of 2 people found this review helpful. Did you?
Manufacturer Response:
Dear Valuable Customer, Thanks for choosing ORICO as your preferred choice, this is Sherry from ORICO customer care team. We strive to provide the most reliable and highest quality products to our customers. Your kind feedback is the best encourage that keeps us moving forward and constantly improving our goods and services. Should you have any further problem ,please feel free to contact ME. Our E-Mail is newegg@orico.com.cn ,we will try our best to help you. Thanks again for choosing ORICO as your preference. Best Regards ORICO Customer Care Team
Anonymous
Ownership: 1 week to 1 month
Verified Owner
A bit of a mixed bag product8/10/2020 4:20:26 AM

Pros: - Good form factor with a bit more surface area than some competing products for adequate cooling. - Performance of the "cheaper" x2 NVMe drive (from a decent source—mine's a Crucial) is going to be much faster than a "high end" SanDisk USB stick. The product does its job in that respect.

Cons: - Thermal pad is just slightly too thin, so don't rely on the "cooling power" of the aluminum case as a "heatsink" unless you replace it - If you lose the impossibly tiny screws … AND YOU WILL… *sigh* - Chipset does run a bit warm, likely within spec, but warm all the same

Overall Review: I wanted to love this product, but it's got a couple of very significant flaws. First, a somewhat more minor flaw, the chipset used is the Jmicron 583 which, if you're unaware, tends to run a little hot. it won't make any contact with the aluminum case either, so there won't be any heat transfer at all. Honestly, I'd rather have the chipset make thermal conductivity with the case than the SSD itself, since that probably doesn't strictly need it. If it did, the thermal pad isn't quite thick enough to guarantee that it does anyway. The real flaw is that the two included screws are so tiny that I basically guarantee you WILL lose one or both sooner rather than later, and once you do you don't have a guaranteed way to hold the SSD in its socket nor keep the enclosure together. They went with the lowest-cost solution here and it's just an unfortunate choice. I've already lost one of the screws and have resorted to holding the thing closed with some thermoplastic "rubber" bands. I'm probably going to take the thing to work where it'd only ever be used as a temporary solution where holding everything together with a rubber band might actually be preferred anyway. (If someone wants it for something more permanent, it's likely the correct size screws for it have been pulled out of some laptop or mobile device we've recycled.) I chose this product because Orico typically has more hits than misses with me on their products, but this one's a miss I think. I think I'll look for the cooler-running Realtek controller and a less fiddly design in what I replace it with. I've seen other, similar complaints in other reviews on this product, so I presume Orico's next iteration on this product will likely use a slightly different retention mechanism on the M.2 stick, maybe with a larger screw, and either a sliding or magnetic cover. If they use the cooler-running Realtek controller as well, it'll probably cost a few dollars more, but I'd say it'll be worth it.

4 out of 5 people found this review helpful. Did you?
Manufacturer Response:
Dear Valuable Customer, Much appreciate for choosing ORICO as your preference, this is Maite from ORICO Customer Care Team. Thanks for your kindly feedback, truly sorry for all the inconvenience to you. To deal with your problem and serve you well, could you please tell me the problems by email? My email is newegg@orico.com.cn, We will try our best to solve this problem Sincerely hope if you can give us a chance to fix the problem. For the defective products within warranty, we can send you a replacement. Hope to hear from you soon, thanks. Best Regards
Langdon G.
Ownership: 1 week to 1 month
Verified Owner
It works... slowly.10/28/2021 1:07:57 PM

Pros: It works Enclosure transfers heat well from the drive

Overall Review: OK if you just need to clone a drive once, but it is slower than any modern thumb drive or external HDD I've seen. I've not tried the USB 3.0 connector, only the faster USB 3.2 Type-C connection. Barely exceeds USB 2.0 speeds @ 120 MB/s. I get over 4000 MB/s with the same drive installed internally.

Overall Review: The first one came defective, but Orico made it right and sent me another one. Thank you for taking the time to help me out!

Did you find this review helpful?
Manufacturer Response:
Dear, Thanks for your supporting ORICO. If you have other question, please feel free to contact us. Thanks. Sincerely ORICO