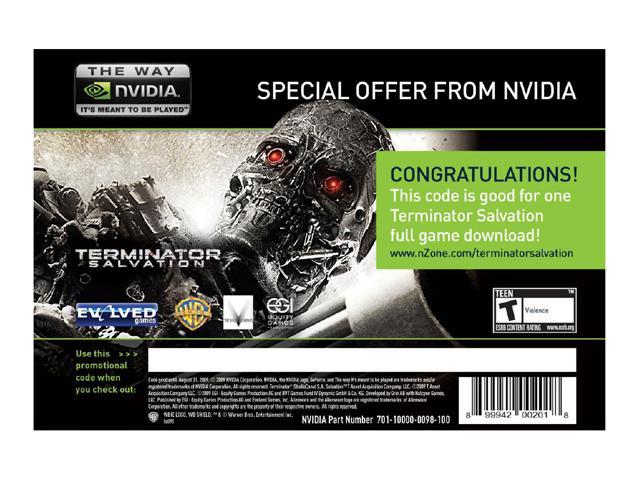 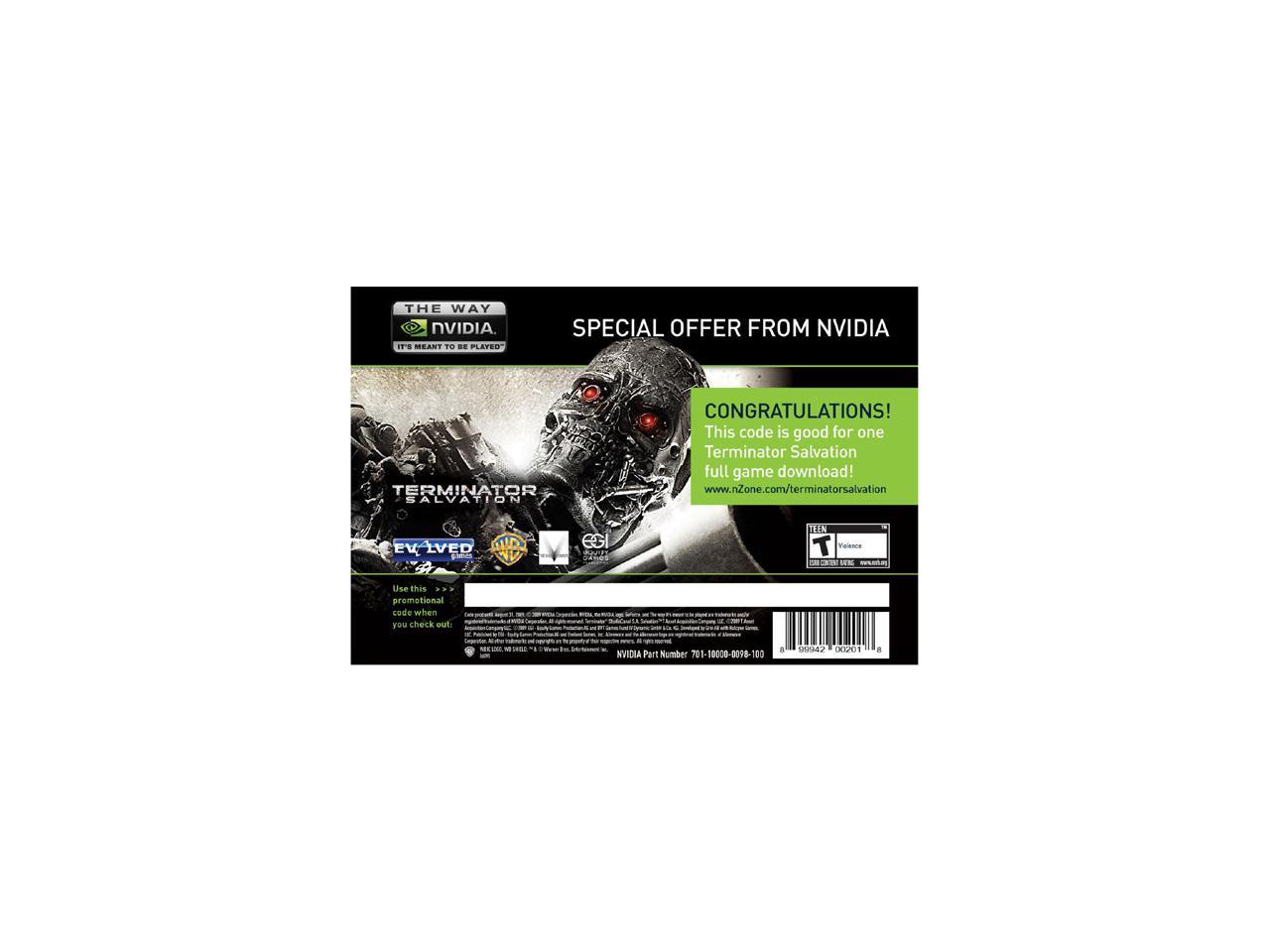 Cons: Bought two EVGA 275GTX Cards for SLI. Came with cards saying to download from NVIDIA. Codes do not work. What else needs to be said.

Overall Review: Feel like I was ripped off. Invoice actually shows charges for the games and deletes cost of video card accordingly. So that is a C-note down the tubes. Sent email to NVIDIA for answer to why codes with expiration date of August 31 2009 are invalid.

Cons: The game took me a good 5 hours to download. I believe the average download rate was 160kbs. Game

Overall Review: Overall, don't buy the game unless it's free or you love the terminator series.

Cons: graphic were good but the controls weren't too great. i had to download the game off of nvidia's site which took 5 hours. overall the gameplay is alright, i'd rather play cod5.

Pros: The code work, it's the only thing that worked.

Cons: The game stop download at 99%. Then you receive a message of Error 403 : Acess Forbiden. Like many users on nvidia forums expressed it and here, this game cannot be downloaded correctly. The download of almost 7 gig stop at Data 8, with less than 2mbs left to download to play the game. Ridiculous. Nvidia did not answered my emails and my questions on their forums. No solutions are being provided to people.

Overall Review: I bought a video card and this ''game'' came in bundle with it. At least there is two others games with it. I will never buy nvidia card again that includes googies or free games.

Pros: Cons: The game itself will not complete the download. At 99% it has a 403 error in which the server refuses connection due to "forbidden" then promptly aborts.

Cons: I am NOT the only one with this problem which has been occuring since December of 08 as of nvidias forums. Google search "terminator salvation error forbidden download nvidia" and see what you find.

Overall Review: Yes it was free but I still want it since it belongs to me. Better off pirating the full version (which is legal if you are legally allowed to own the copy of said version AND you disable sharing during and after the download as to not seed to people who may not legally be allowed to own said copy of the game). Overall: FAIL on support and execution. Zero eggs (if it would let me)

Cons: The download server/manager is broken. After several hours of downloading I am receiving a message stating: "Error 403: Forbidden" Great, so i wasted 4 hours of my life to fill my hard drive with 9 gigs of useless data. People have gone postal over less. THIS DOES NOT WORK

Overall Review: Why does Newegg allow these types of offers? Either give me a physical diskette or take the item off of this website please. Attempting to download 9 gigs of data from a broken server is ridiculous. THIS DOES NOT WORK

Pros: The card with the download instructions was light and did not contribute to shipping time or costs.

Overall Review: When you put a new system together, there's lots of downloading to do. The last thing I want is to add something to that list.

Pros: Well optimized graphics, kinda looks like a third person form of Left 4 Dead. On my gtx 275, I never went below 100fps, which is kinda pathetic for any modern game. The game was free for me, came with my graphics card, so I'm happy about that.

Cons: Beat it in roughly 2 1/2 hours! That is pretty much the shortest game I've ever played. Wasn't on easy mode either, it was normal. Game play itself is incredibly repetitive! "Oh look, there is some cover in an open area, I think some enemies are going to pop up outta nowhere!" For the most part, the cover is kinda formed in a circle so you can flank the enemy. There is almost no strategy to that whatsoever. There's no way to change video settings in this game, except for the resolution. Didn't bug me too much since my system should run games on highest settings anyways. One last Con: I had to download this game. 7gbs on my internet takes me about 11 1/2 hours to completely download. But that isn't what got me annoyed! What happened was at 99%, I kept getting an error message saying that the server lost connection, 403 = Forbidden??? I had to wait until 10 p.m. last night for all the kiddies to stop downloading, so it took over a day to download. Not fun.

Overall Review: I wouldn't buy this game. It was insanely rushed, graphics reminded me of HL2. Nvidia only has one server to download the game from. The gameplay was fun, but after playing for an hour, being almost half way through already at that point, it kinda...well...bored me. Too many cut scenes in this game too, 1 minute shooting, 30 seconds of random movie cut scene. e8400 3.3ghz gtx 275 4gbs 667 ram