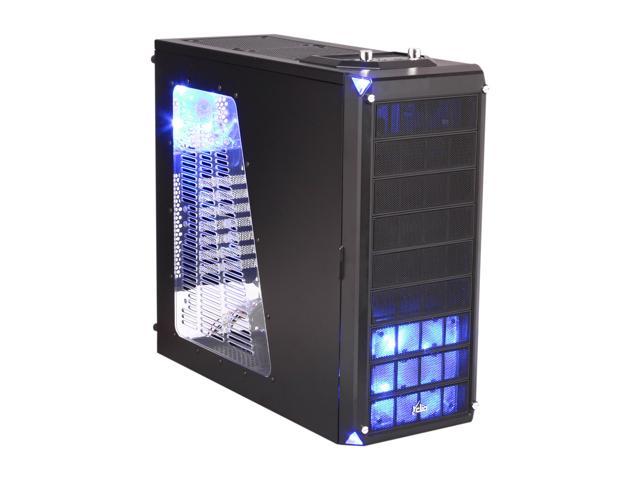 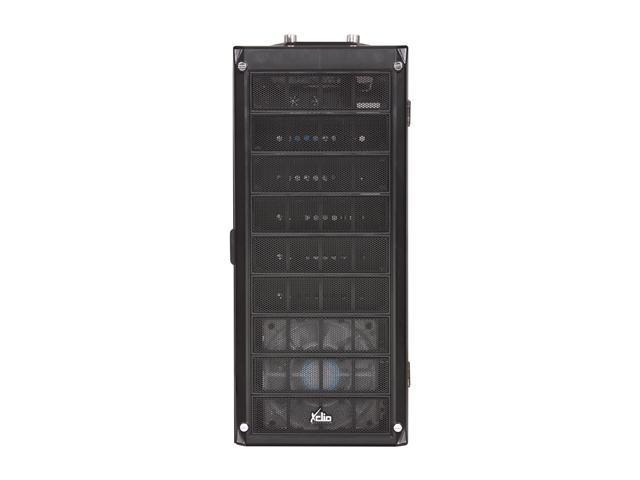 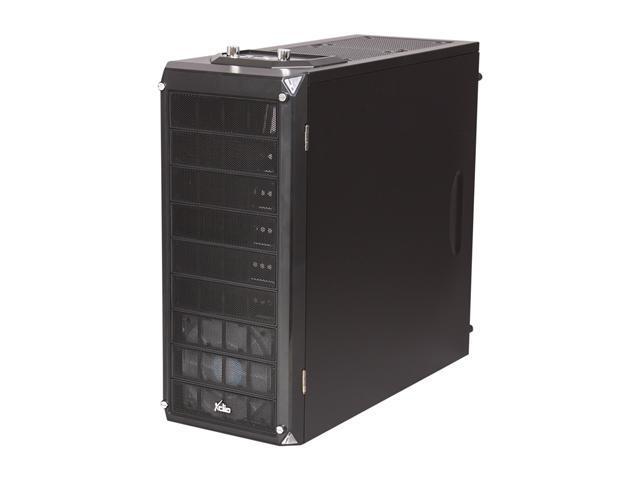 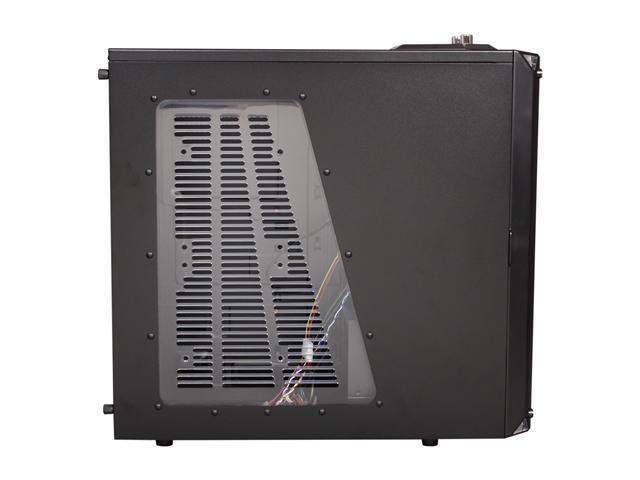 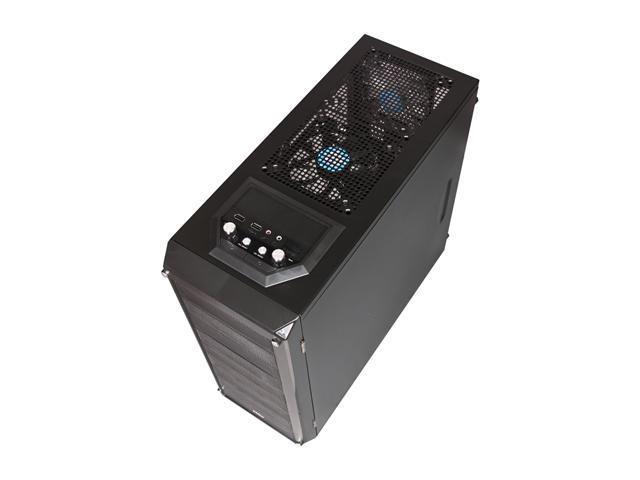 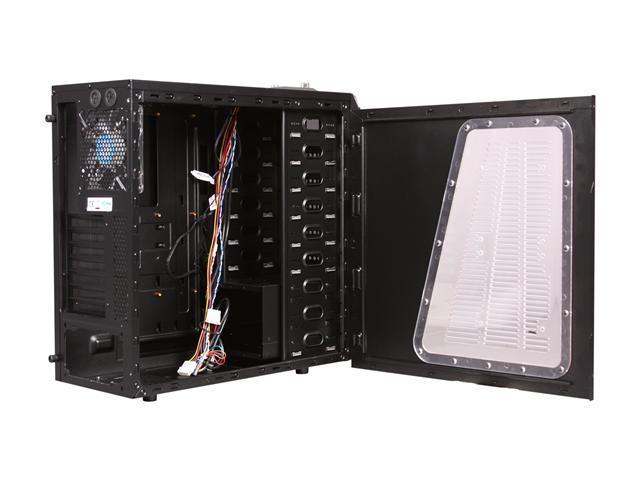 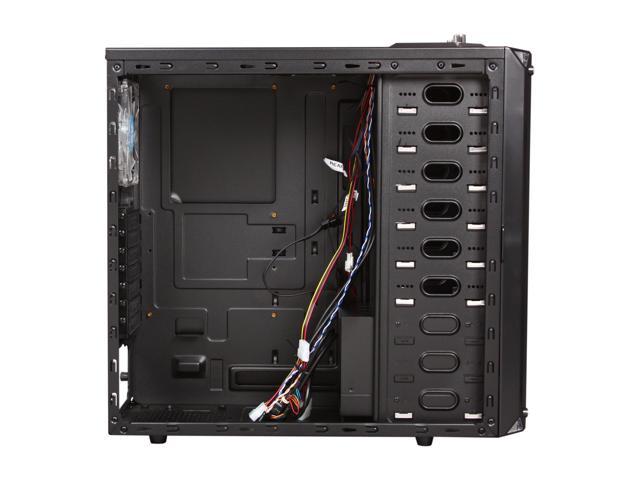 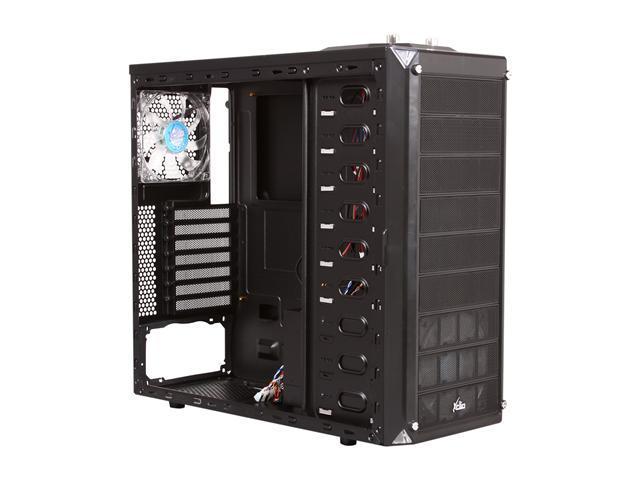 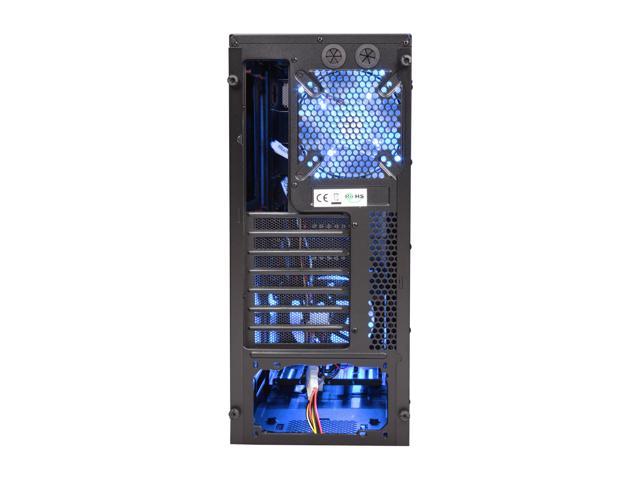 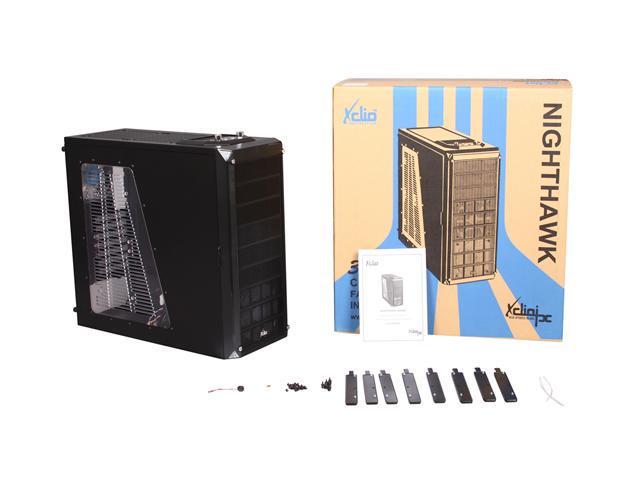 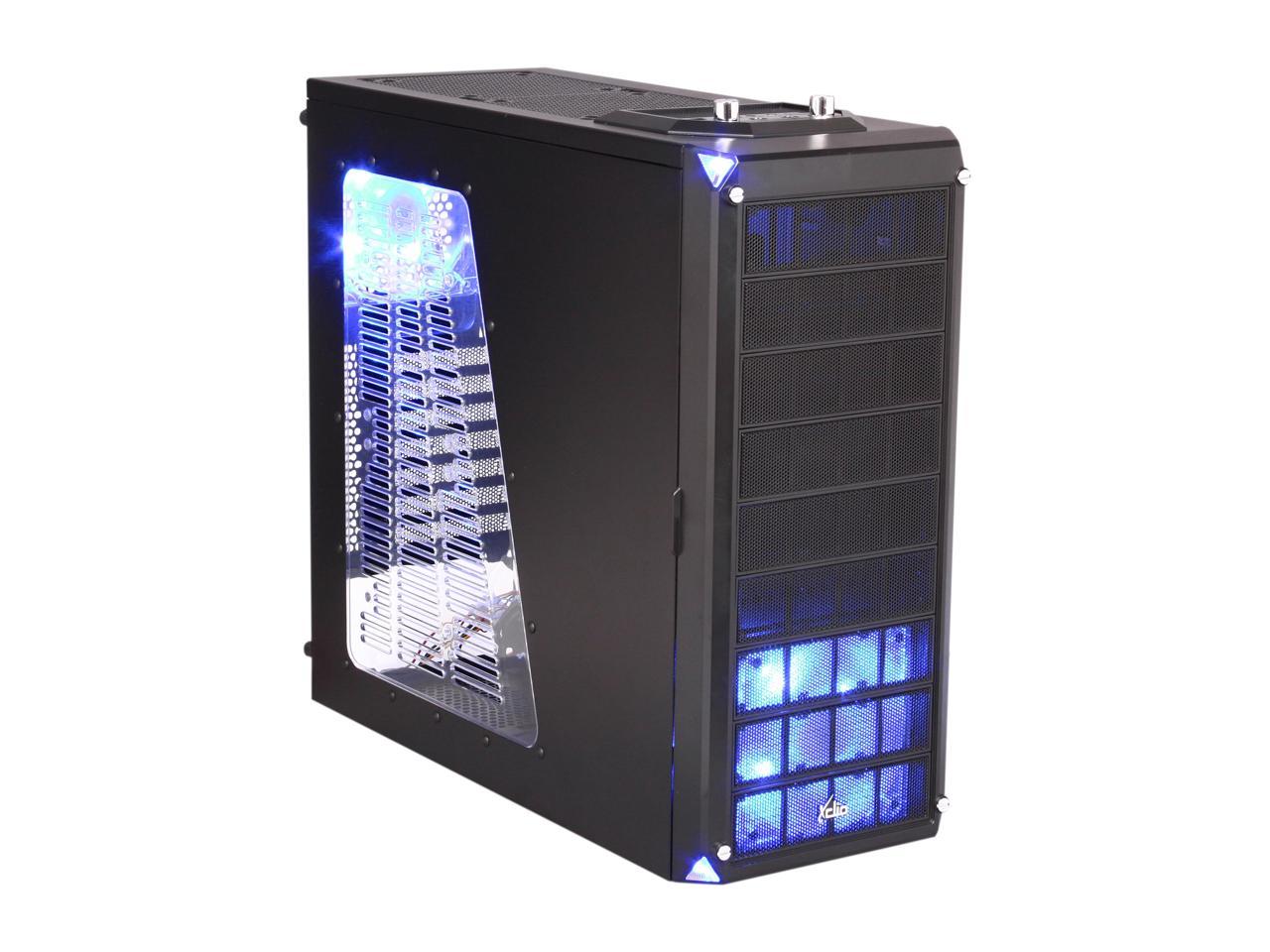 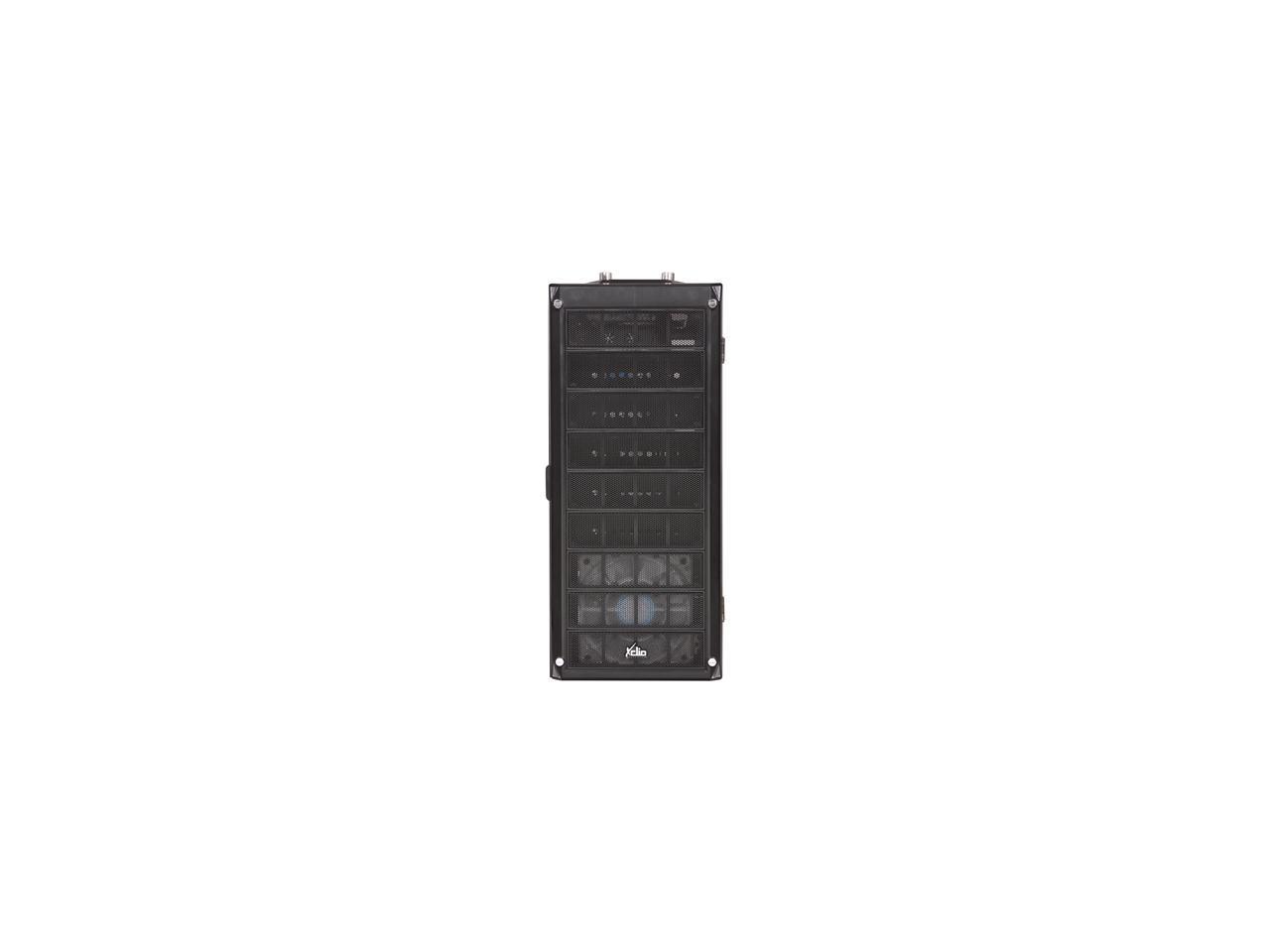 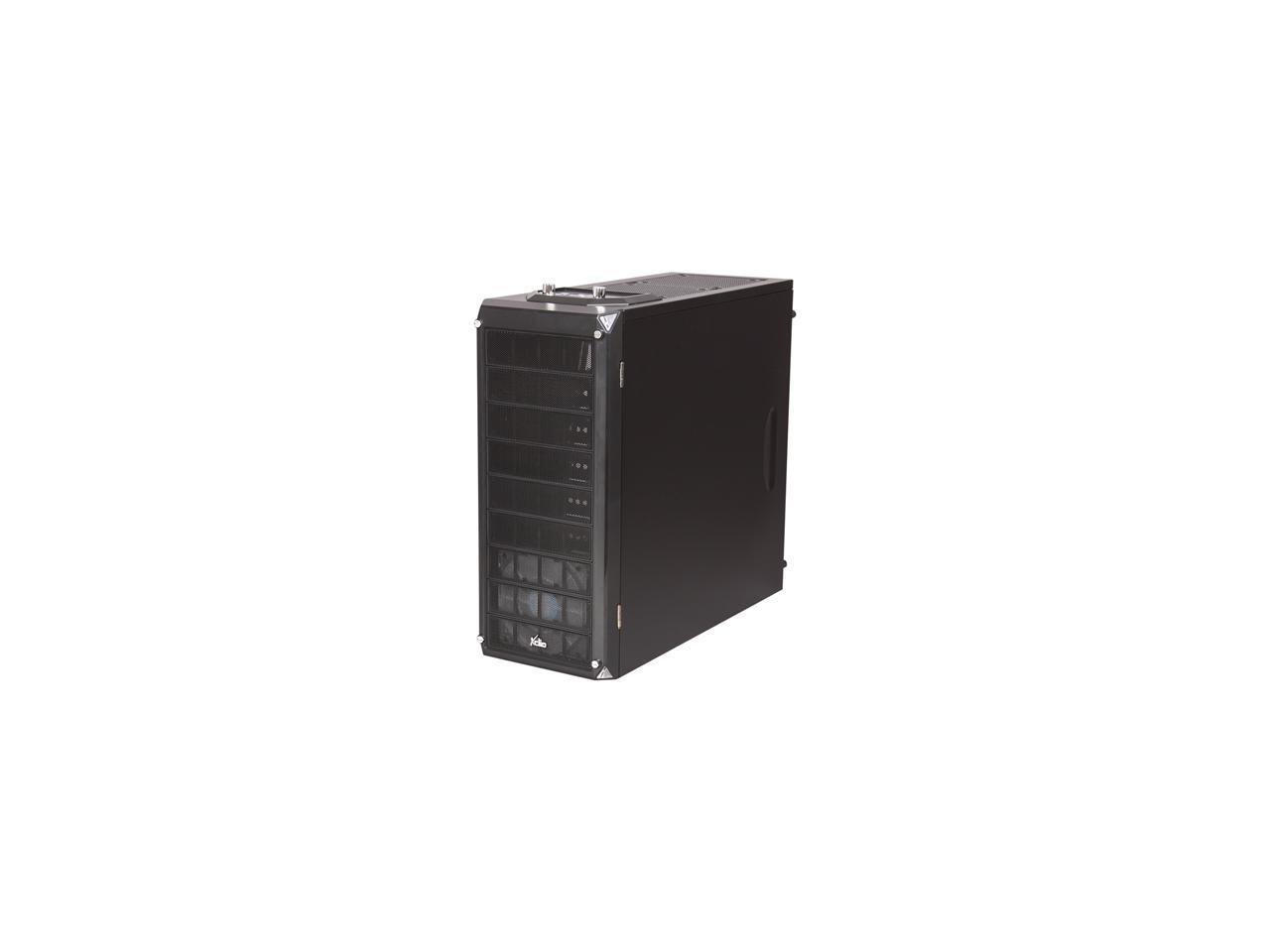 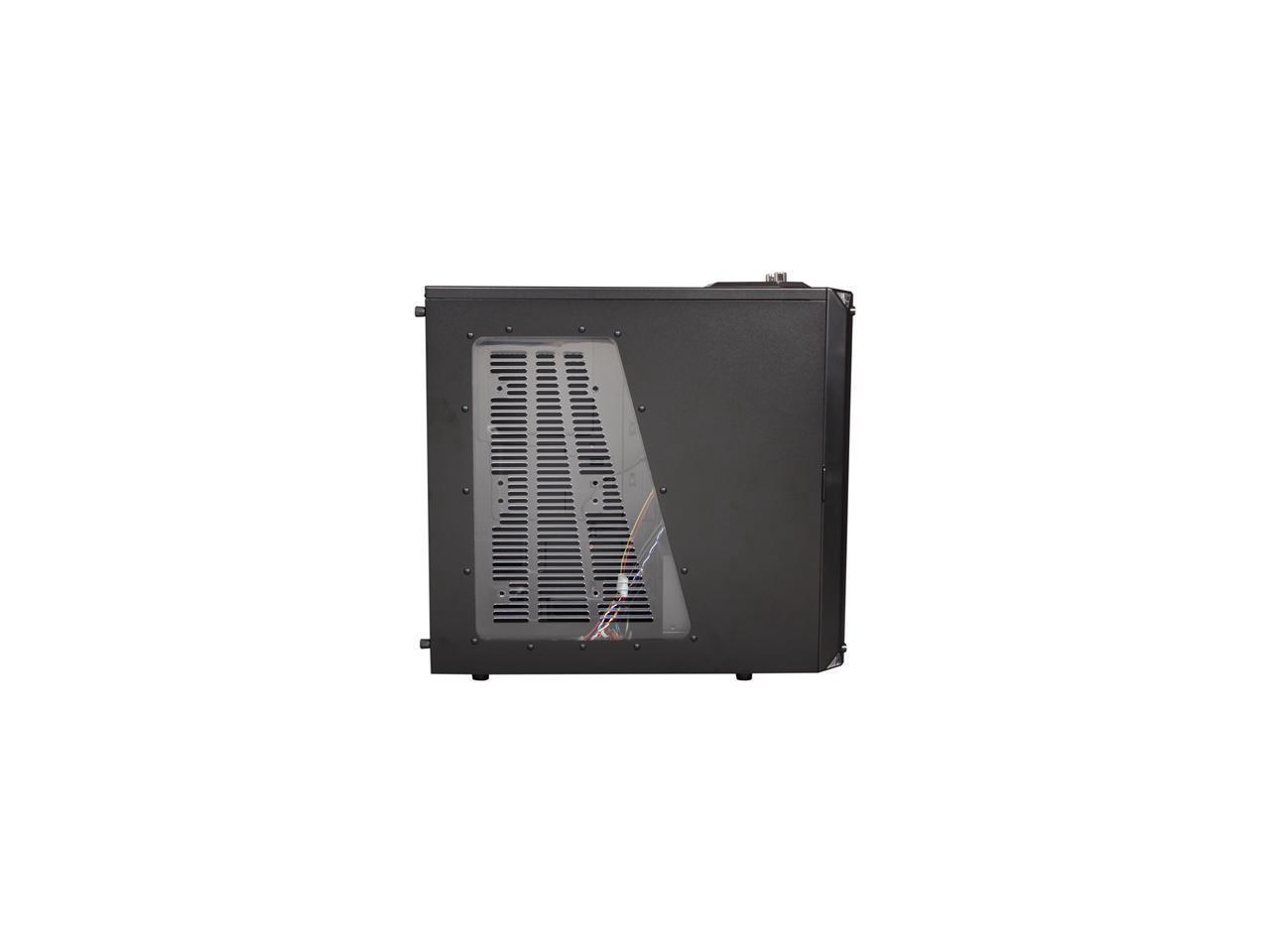 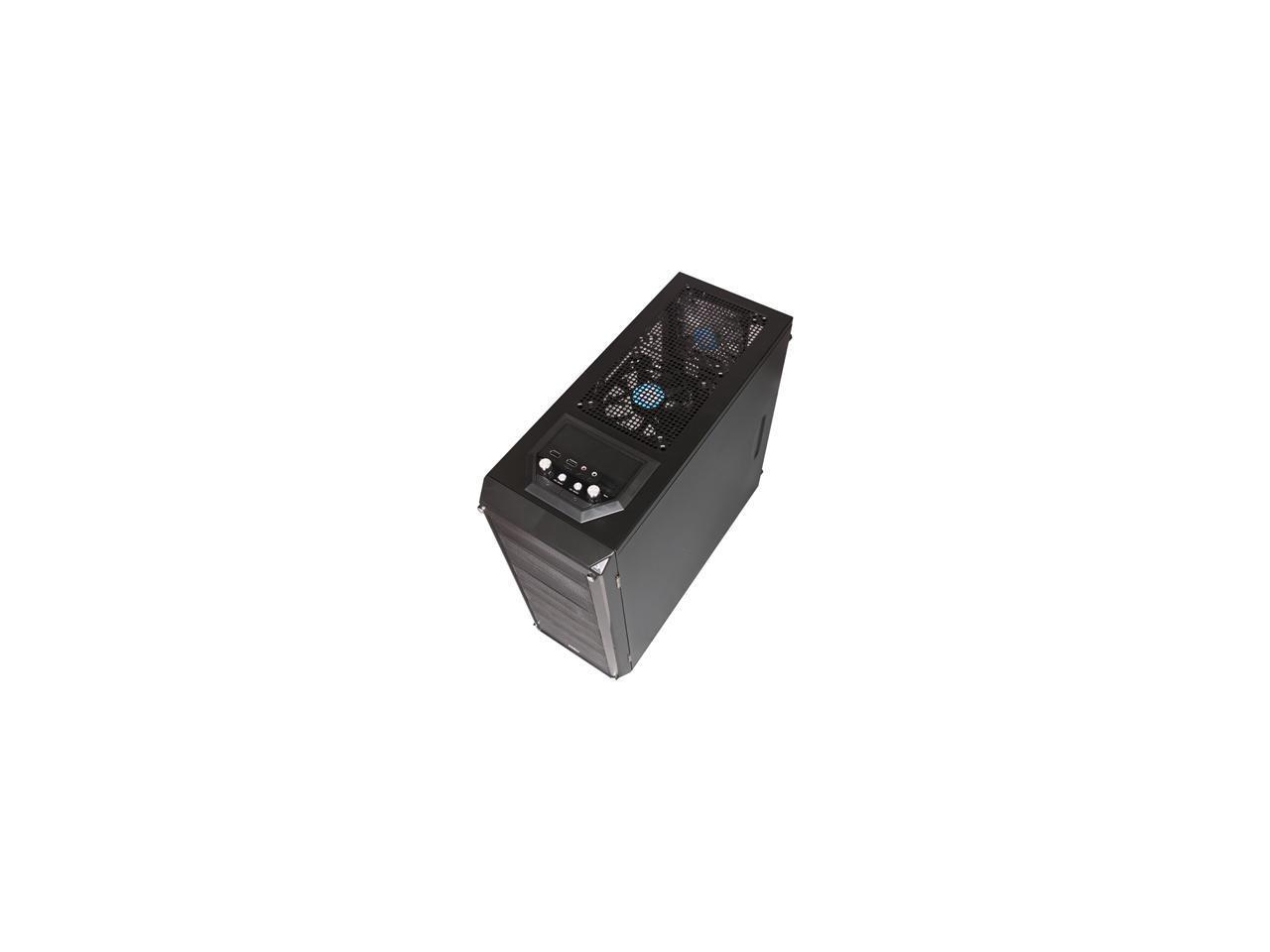 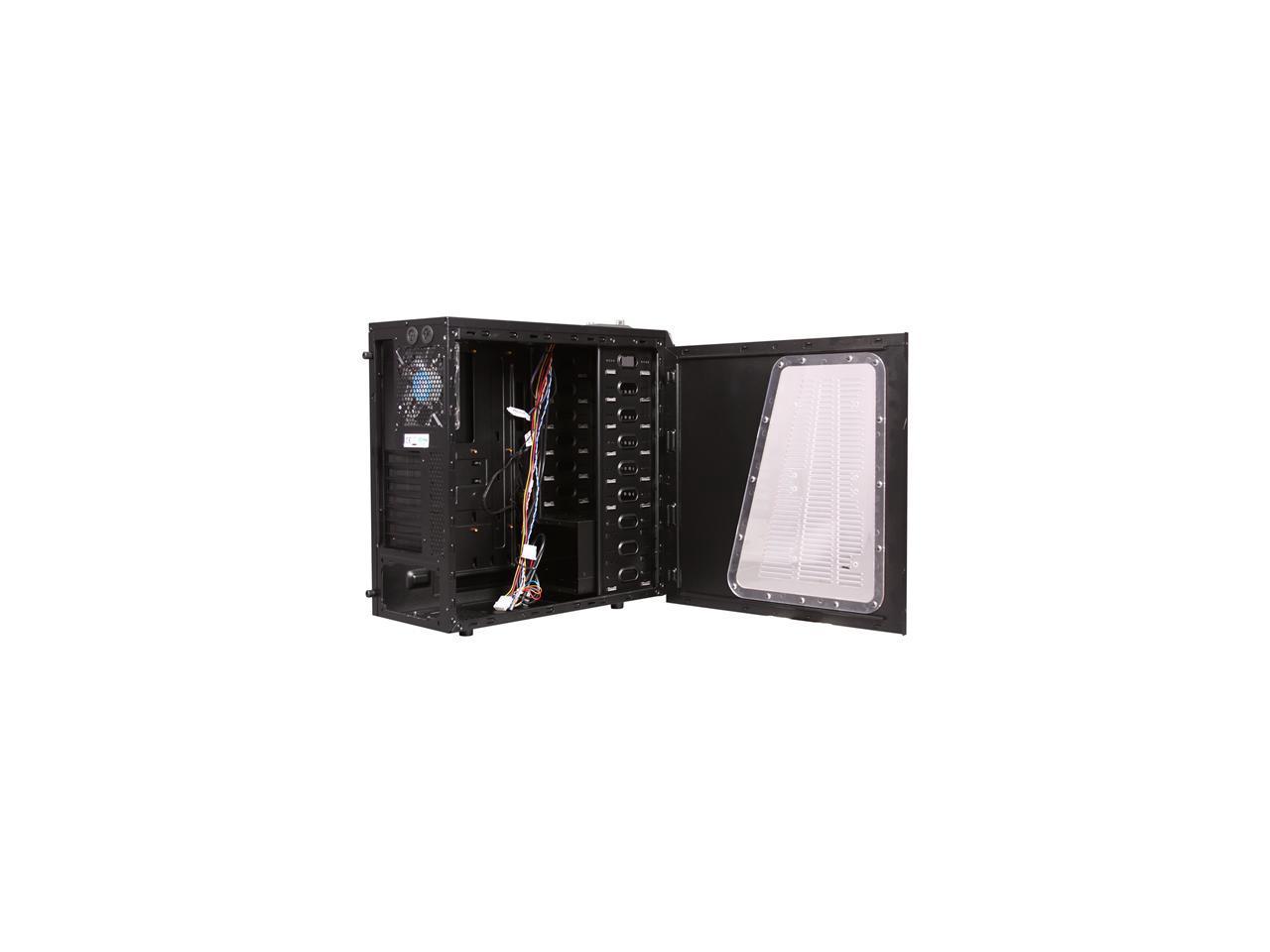 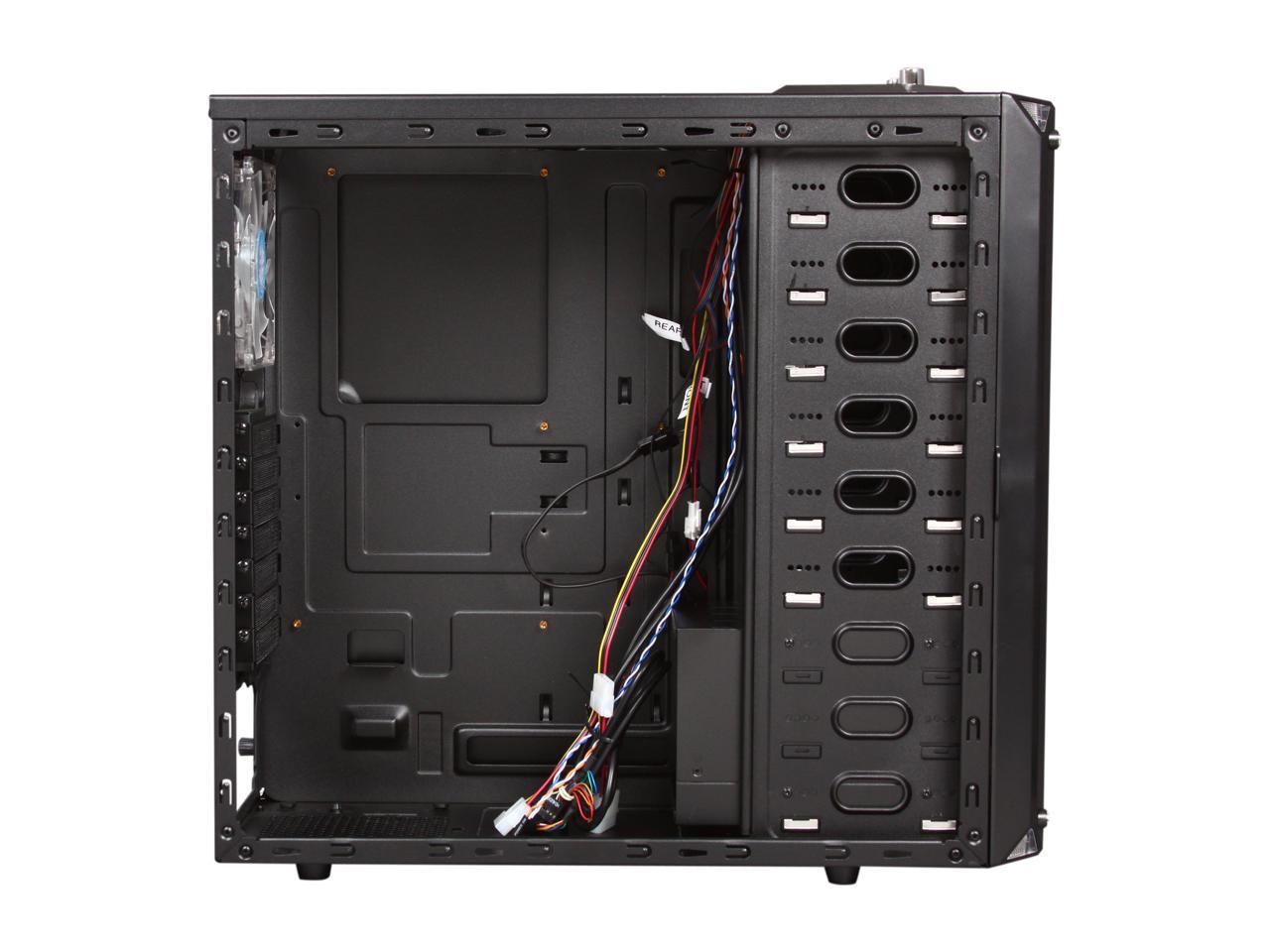 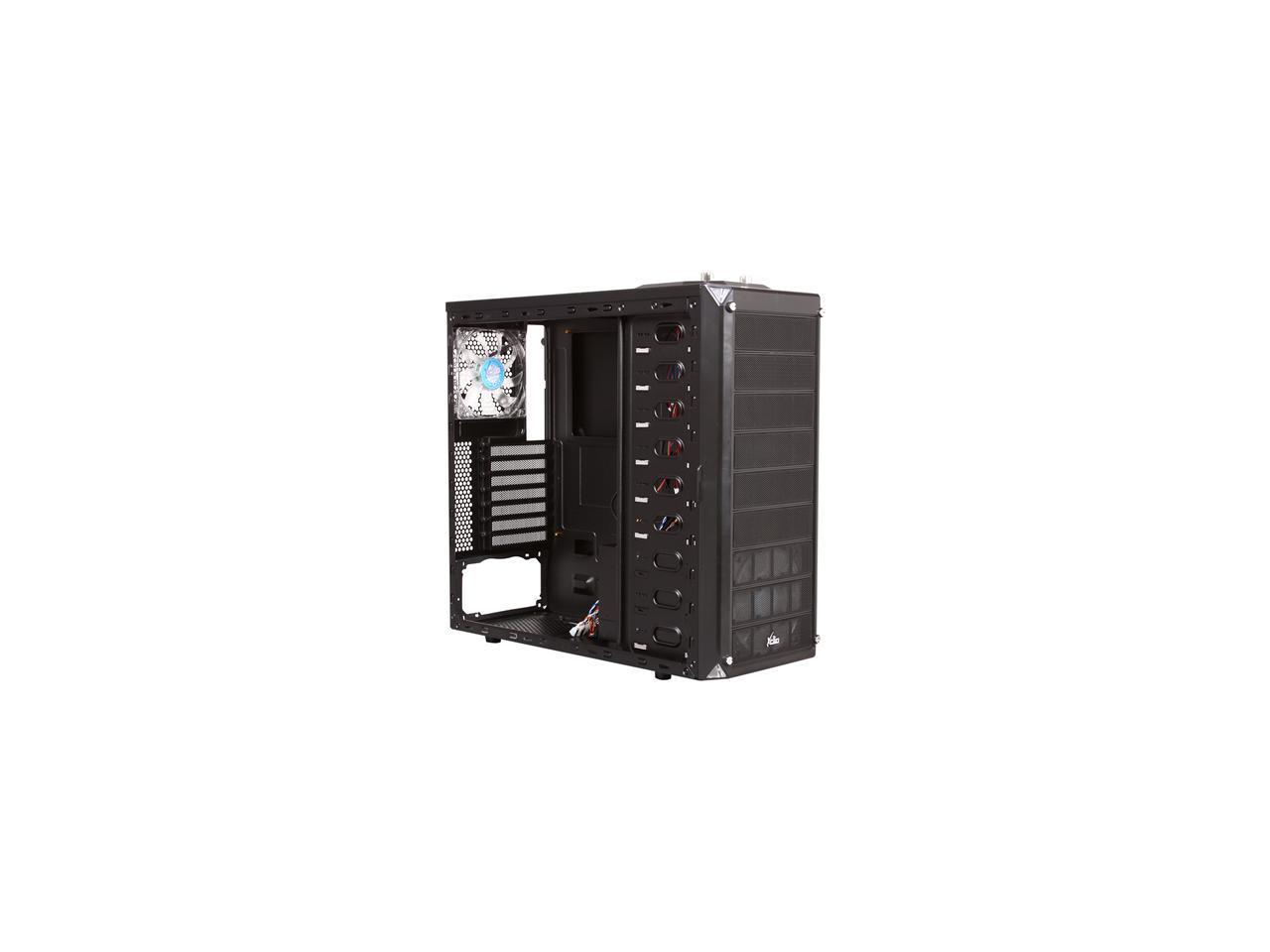 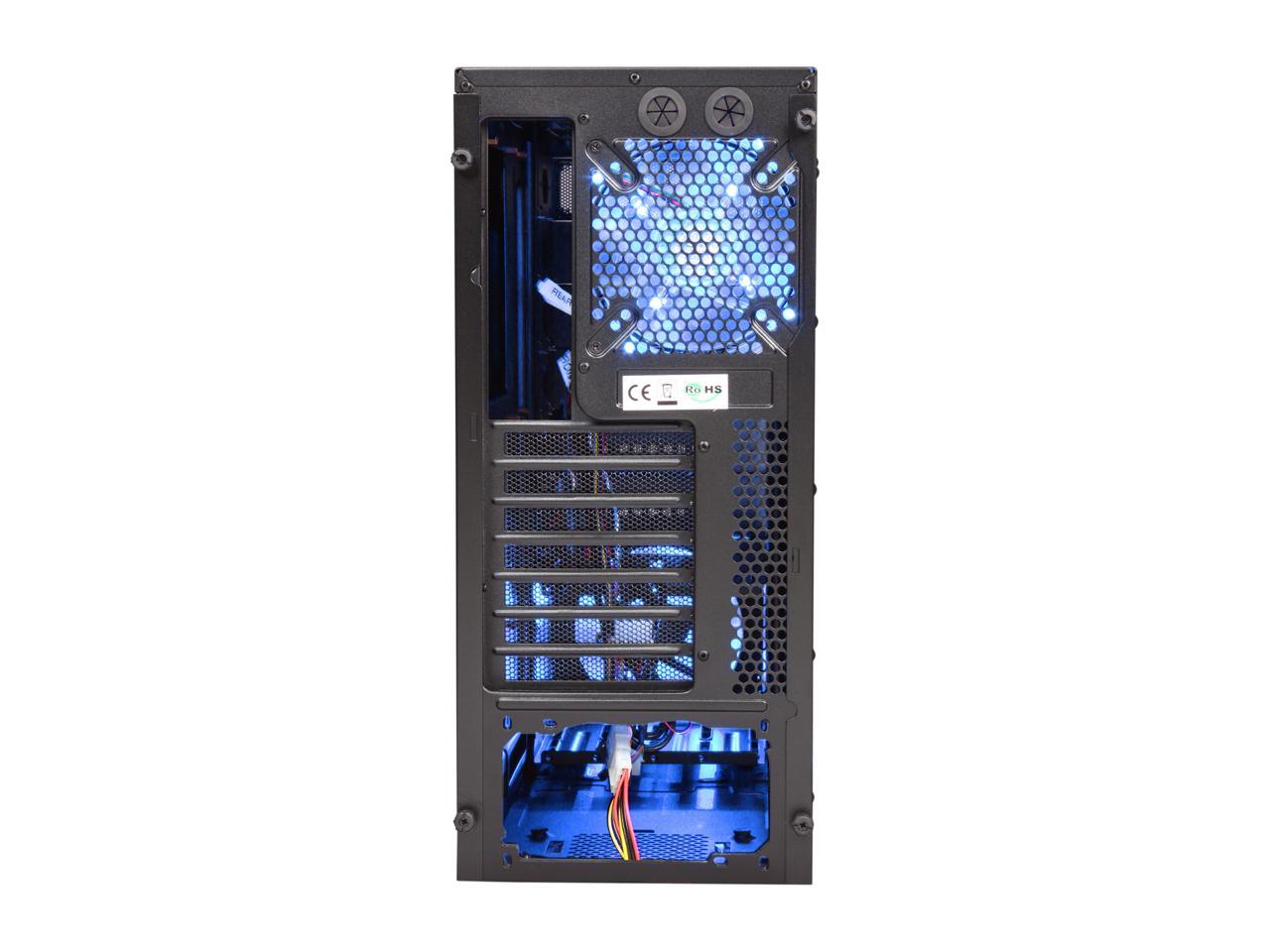 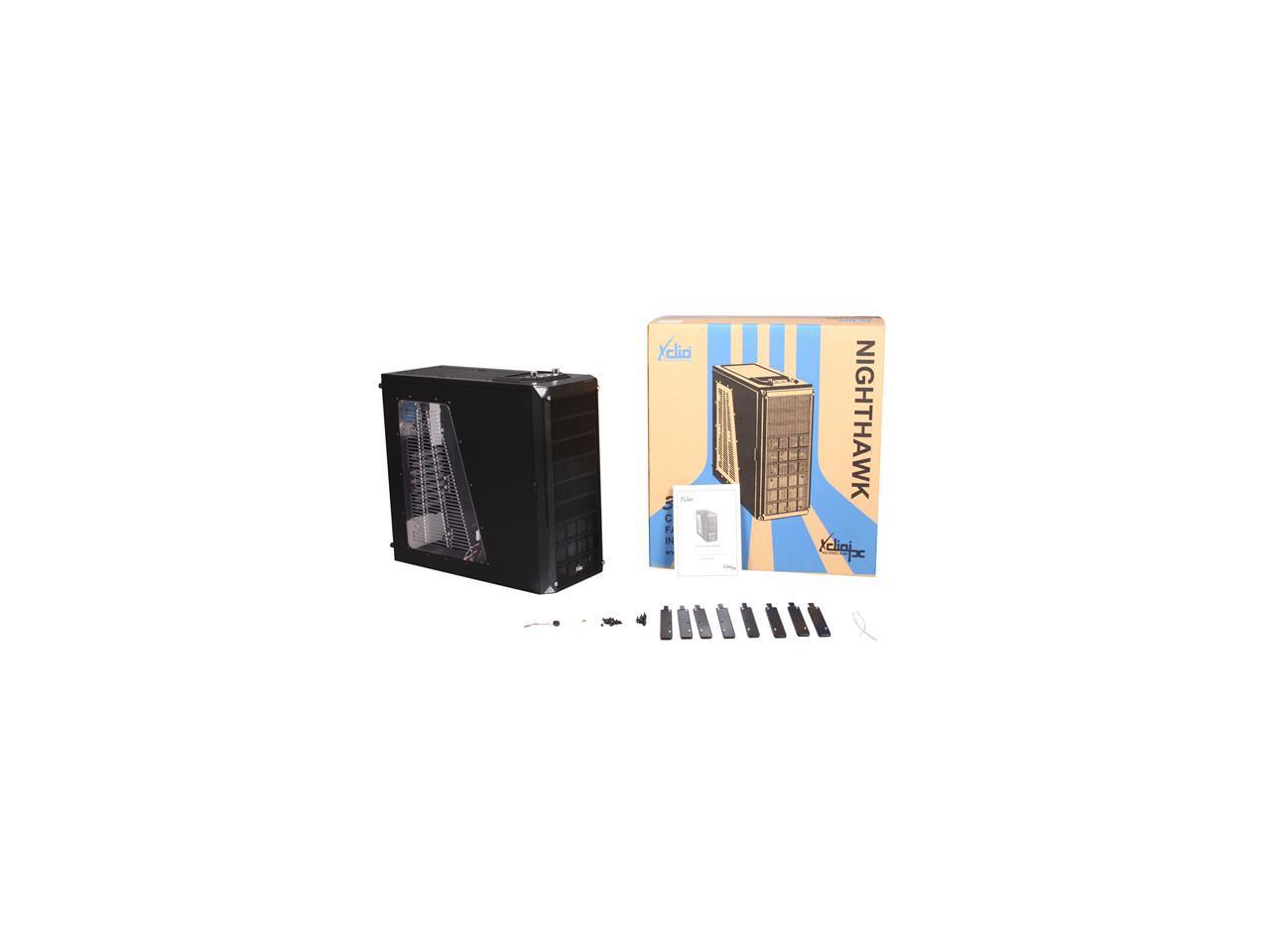 (32) Write a Review
OUT OF STOCK.
Overview
Specs
Reviews
The XClio Nighthawk case is engineered to support your high-performance gaming system in style! The exterior is designed for the twin 120mm blue LED front fans, which draws fresh air in, the 180mm blue LED side fan, which directs the air onto your components, and the 180mm blue LED top fan, which exhaust the hot air. All the fans are controlled by a VR speed control and the blue LED lights give the system a cool blue glow. Top-mounted I/O panel hosts two USB 2.0 ports, two audio jacks and an eSATA connector for easy access.
Inside the case, you’ll have room for your micro ATX and standard ATX motherboard, Up to six 5.25” external drives, four 3.5” internal drives, plus 7 expansion slots. The meshed front panel and eye-catching LED add style to your desk view. Your gaming system will look and run great in the XClio Nighthawk case.

Learn more about the XClio Nighthawk

Pros: This case is amazing, it was exactly what I was looking for: a case that runs cool, cheap, quiet with lots of space inside but overall dorm-room-size conscious. I am transitioning to an i7 but buying everything else before the motherboard+CPU+Ram. This case gets me one step closer, right now it has the heart of my dell 4700 in it.

Cons: Instruction guide has wrong pictures and was no help whatsoever. I build computers all the time so I didn't need it, the cables themselves are labeled so connecting them was a breeze. The fans are econo quality, but are very quiet...my side fan buzzes slightly at high rpms, but that is an adjustment problem. I only hear moving air from the other fans. HD slots are ridiculous because of lack of guide, but I found that using the pry edge of a can-opener can "Shoe-horn" it into the tool less cases Newegg ships it in the box you see in the pic, no special Newegg box. None of these problems are worth deducting an egg for as they are very minor.

Overall Review: The case has so much room for customization, if you take out the HD bays you can have up to 9, 5.25 slots, you can move the front fans in any 3 slot configuration you want, both side panels remove so there is easy access to the back of the cpu it also leaves a .5 inch gap behind the motherboard mount for cable management. P4 2.8ghz 775 ATI Radeon 5770 - 3, 22'' lcd eyefinity display 2gb 800mhz ram Antec 650w 1TB 7200 Seagate 2 250gb WD waiting for cash to up to a ASRock X58 Corei7 build

Cons: None really the only issue I had was putting 9 5.25" drives in it with my ATI Saphire HD6970 the gap is inda small between the card and the drives.

Pros: Good looking case. It's as awesome as the pictures make it seem.

Cons: The fan speed control knobs on the top hardly change the speeds, so I've just left them at full speed because it's just as quiet as minimum speed. The bottom 120mm fan spot on the side panel CANNOT have a fan because the power supply gets in the way. I have a Corsair 650 watt. Did not come with Smart HDD holders - the plastic cradles that hold HDD's. I had to screw the hard drives into the modular holder in a way it was NOT intended. It works well but it just isn't the way it should be. Lastly in order to get the HDD holder out of the front, you must take the fan off otherwise the small "door" won't open enough and the hinges will get in the way. It's hard to understand unless you own it, and it isn't a huge deal, just unscrew the fan. Knocking an egg off for these things. But don't let it stop you getting this case.

Overall Review: Could potentially hold video cards up to 15 inches long. I haven't actually tested this but I don't see why not from looking at it. Simply move the modular HDD holder up as far as possible. Came with 3 fans. 1 in front with blue lights. 1 in back with blue lights. 1 on top with no lights - this one is ALWAYS ON.

Pros: One of the first things I noticed after turning this puppy on was not only kept the inside of the comp nice and cool, but it actually dropped the temp of the entire ROOM by a few degrees! It's a great case, and looks good. I also think it's a lil nifty that you can turn off the LEDs from the 220mm fans... mostly pointless, but nifty... the LEDs are replaceable on the 220's as well, if you wanted to change the colors. The Smart HDD system (since I couldn't find any info on it) allows you to change around or remove the drive 3.5 drive bays; so if you have a long graphics card, you can rearrange everything for a better fit;

Cons: Despite the specs, it does NOT have an EXTERNAL 3.5 drive bay... it has * accessible hard drive bays* which is pretty cool on it's own, but you'll need a drive bay converter kit ($5-$15) if you want to install a card reader or floppy drive. It's also a good thing you can remove the drive bays, cause you'll need to when putting in the mobo... tight fit in an understatement...

Overall Review: I was a lil worried when buying because Xclio wasn't really a big name, but now that I have this case, I REALLY like it! It's well made and customizable enough to last through years of growth.

Pros: This is a very good case with 4 fans (5 if you add one to the back), It keeps everything cool with its very good airflow, This thing does better then some of the expensive branded cases out there that cost over 150$ and have bad airflow. For this great price you just can't go wrong. Really good case.

Overall Review: If your building a budget PC and don't want to mnake it top notch and want your videos cards and everything else to stay cool, You will be crazy not to own one of these trust me guys.

Cons: Nothing good to say but this case is cheap

Pros: Everything is good except the fans. (Plural)

Cons: The front fan died in less than 2 years. The side fan actually went almost 4 years. I don't know about their current models, but the older xClio box, (essentially the same as the current NH ATX Mid Tower) used non-standard fans and they were a b*** to replace.