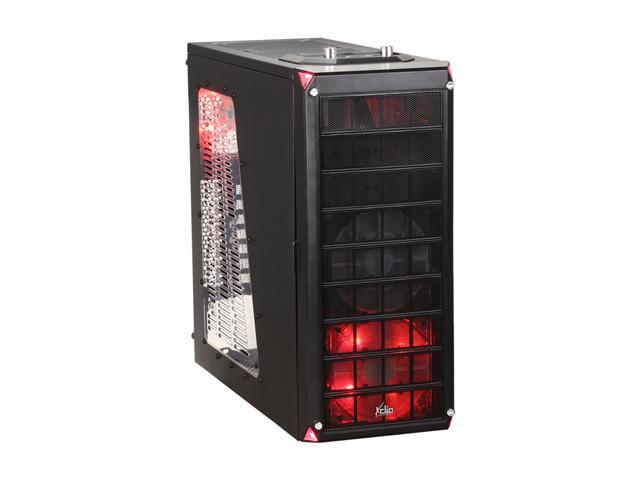 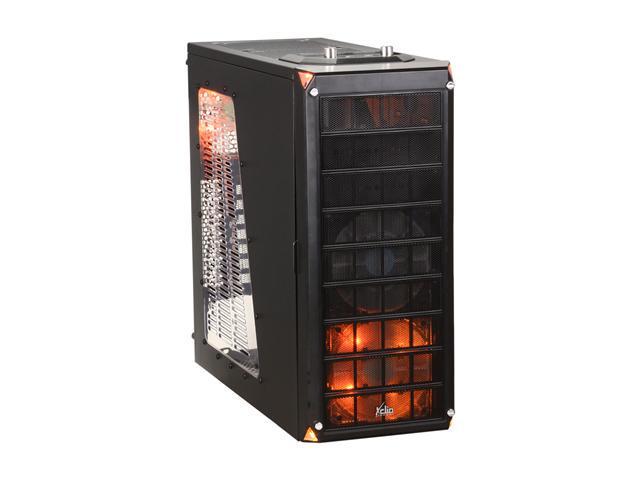 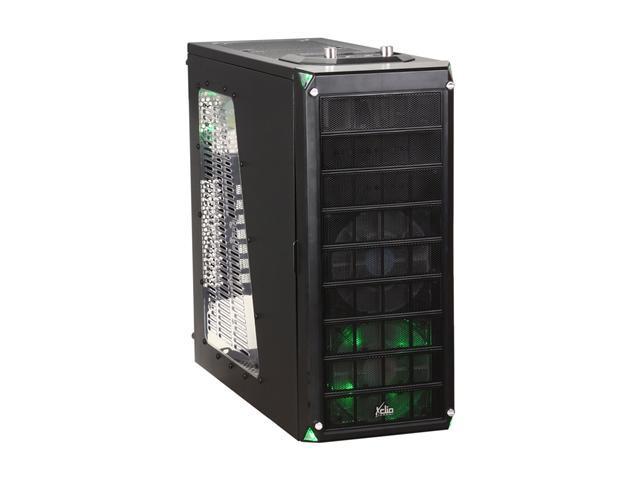 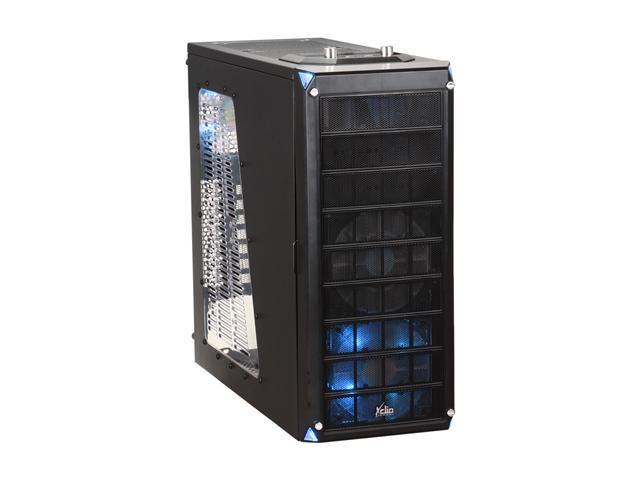 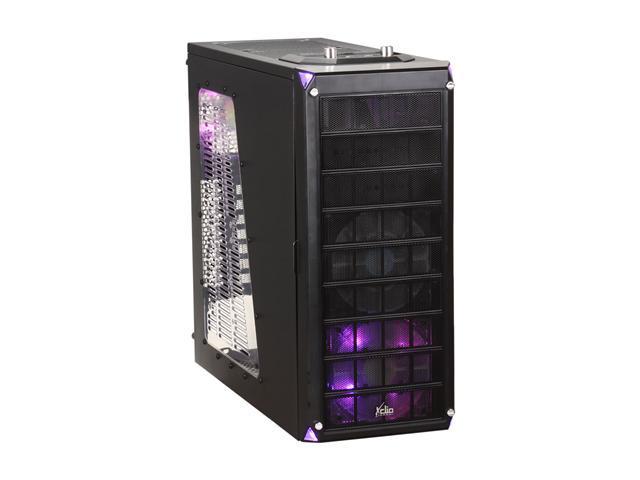 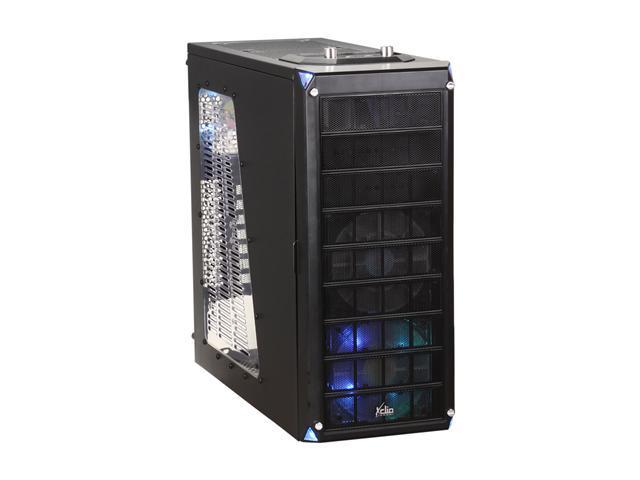 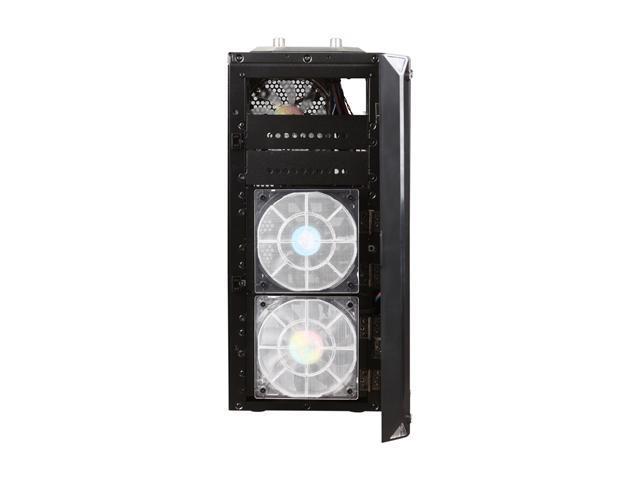 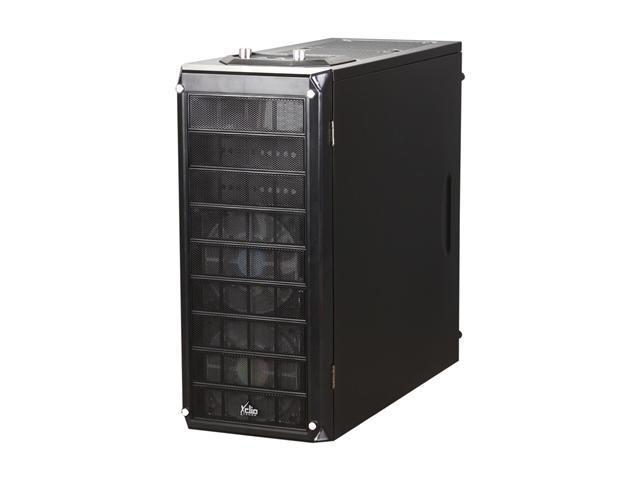 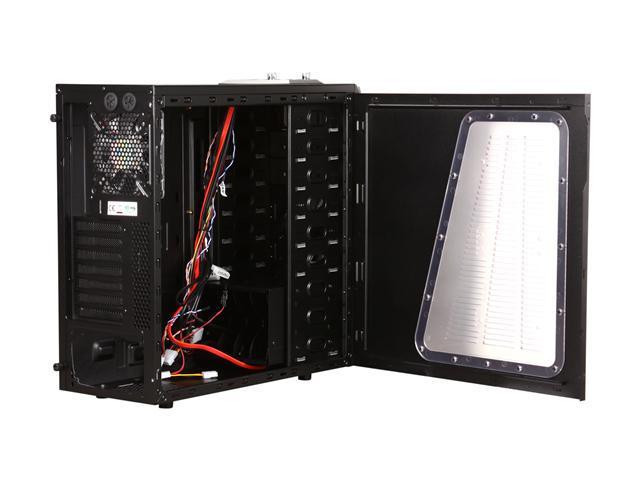 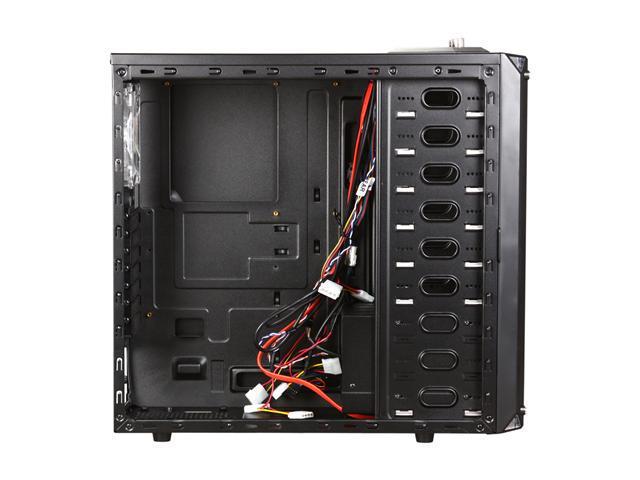 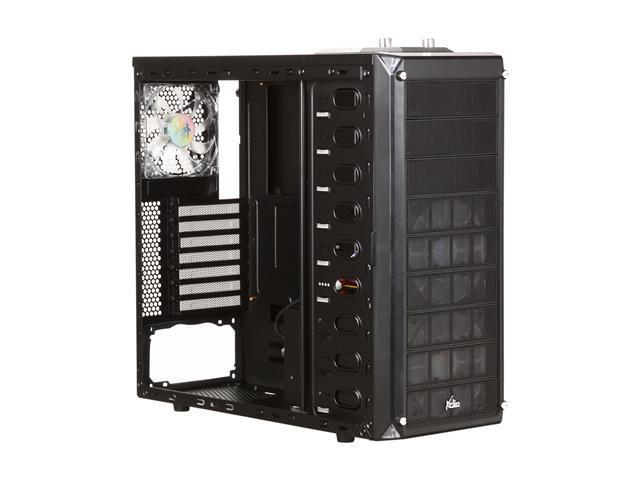 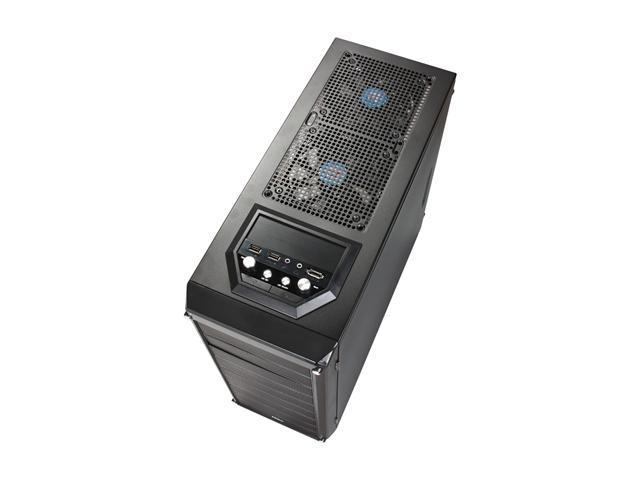 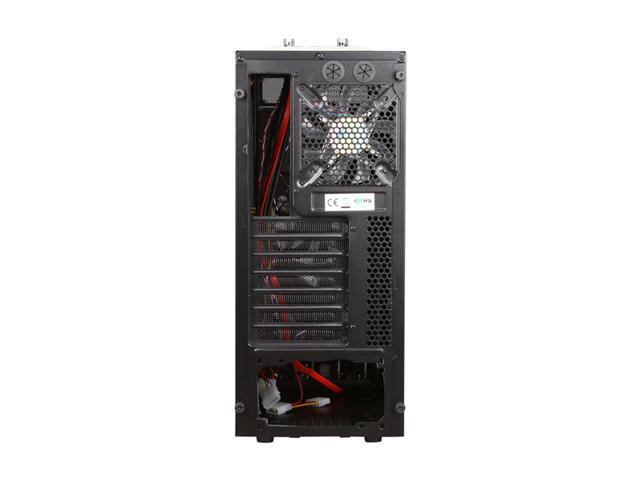 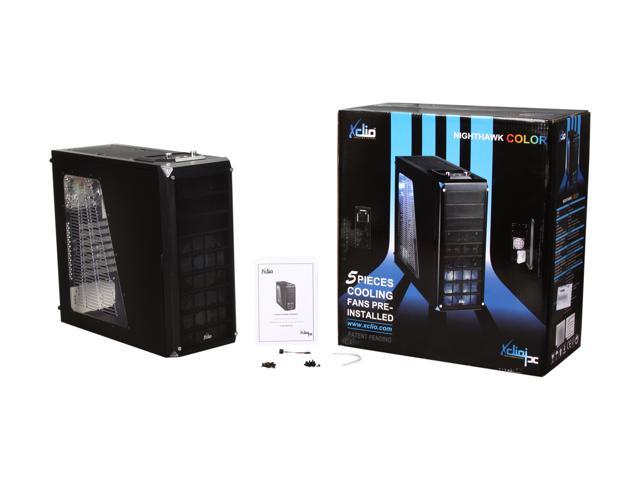 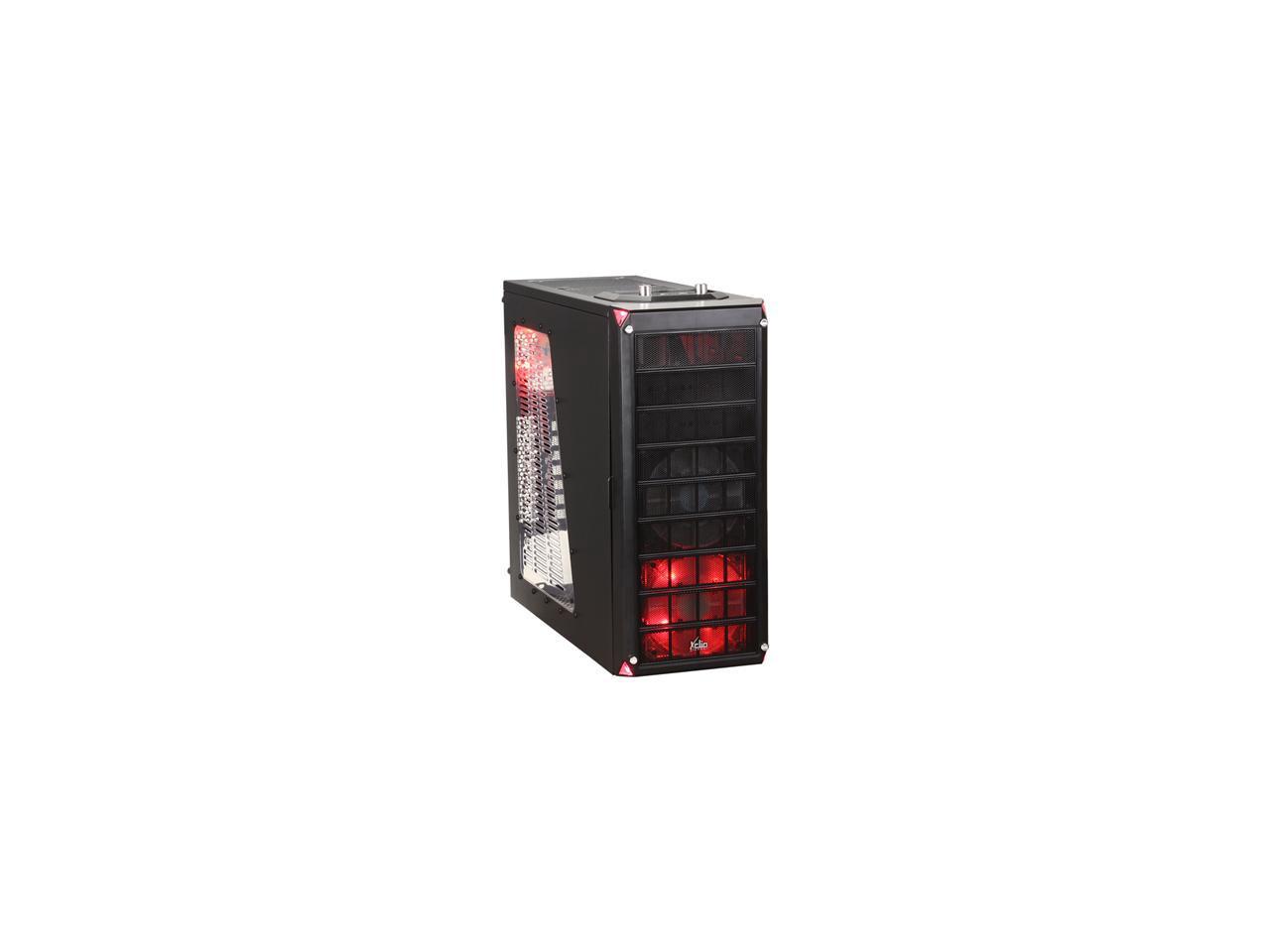 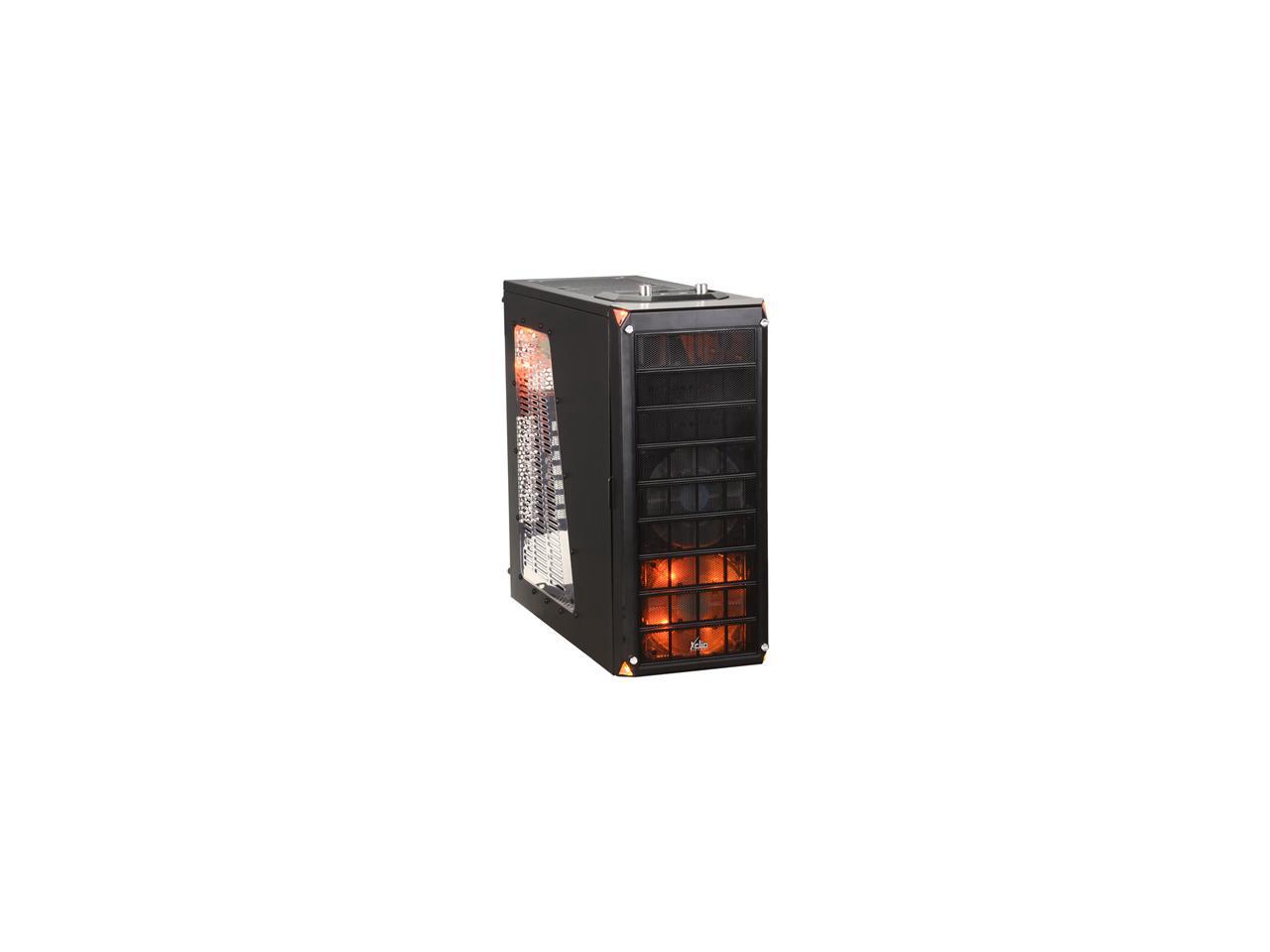 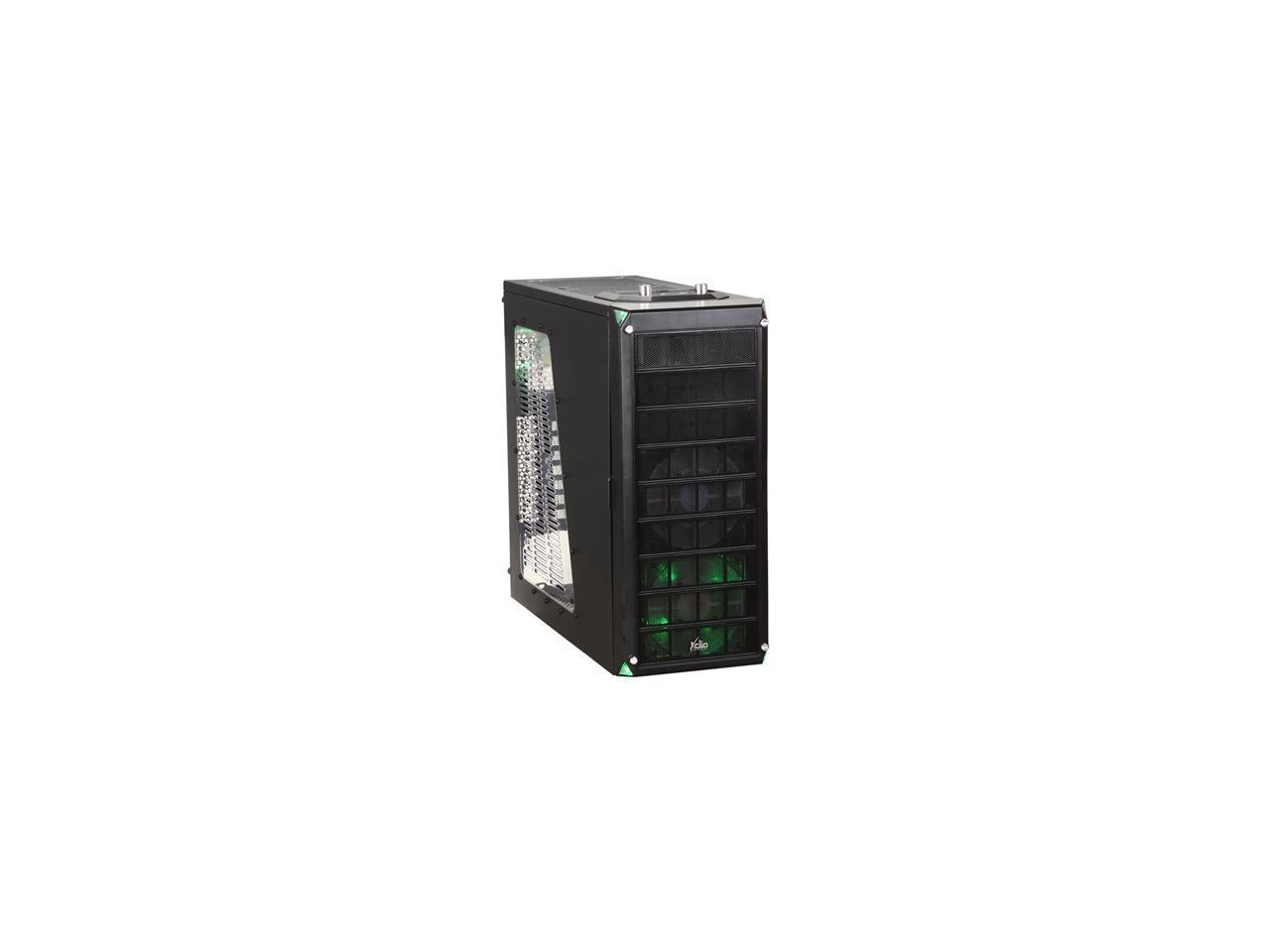 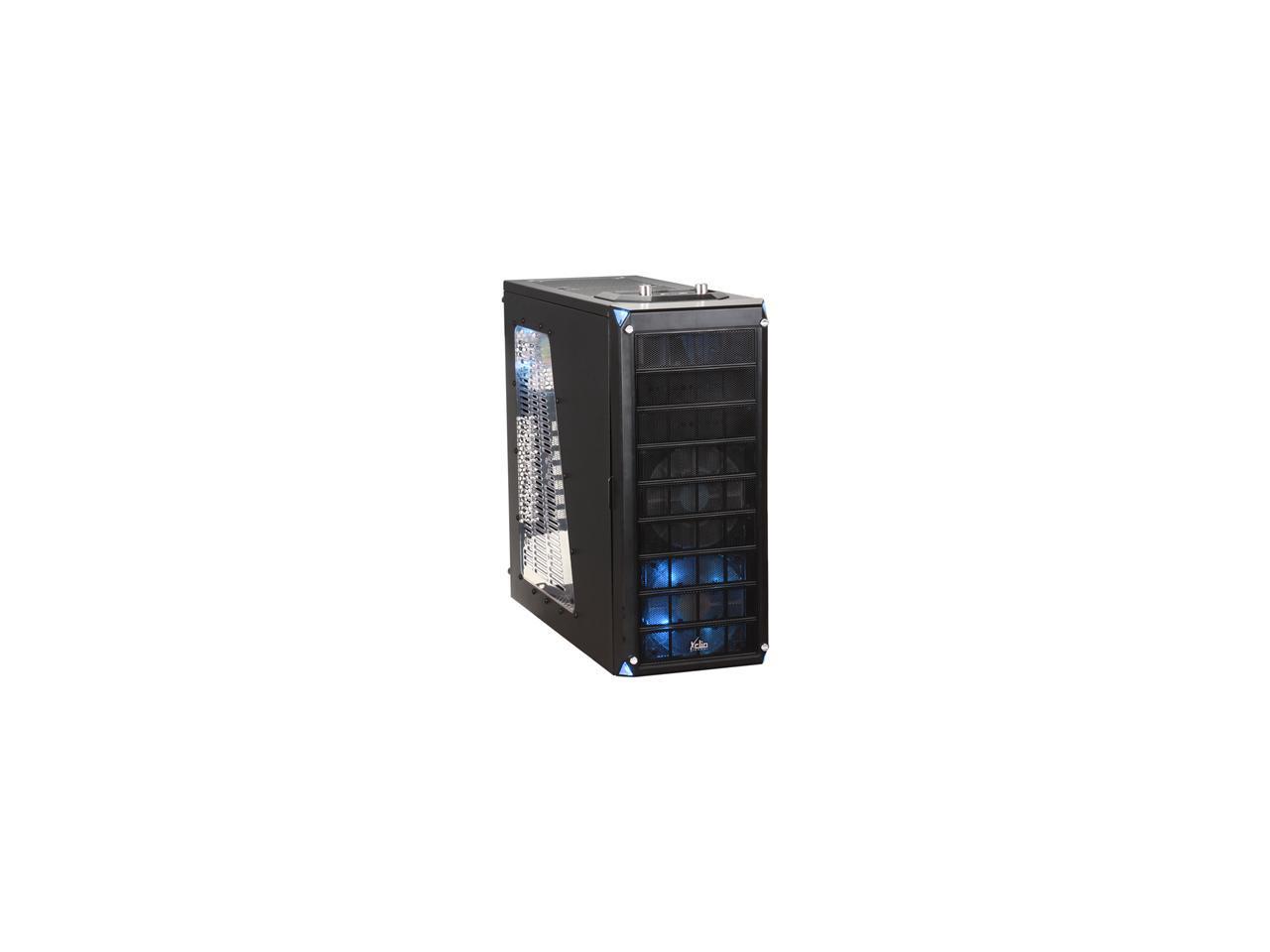 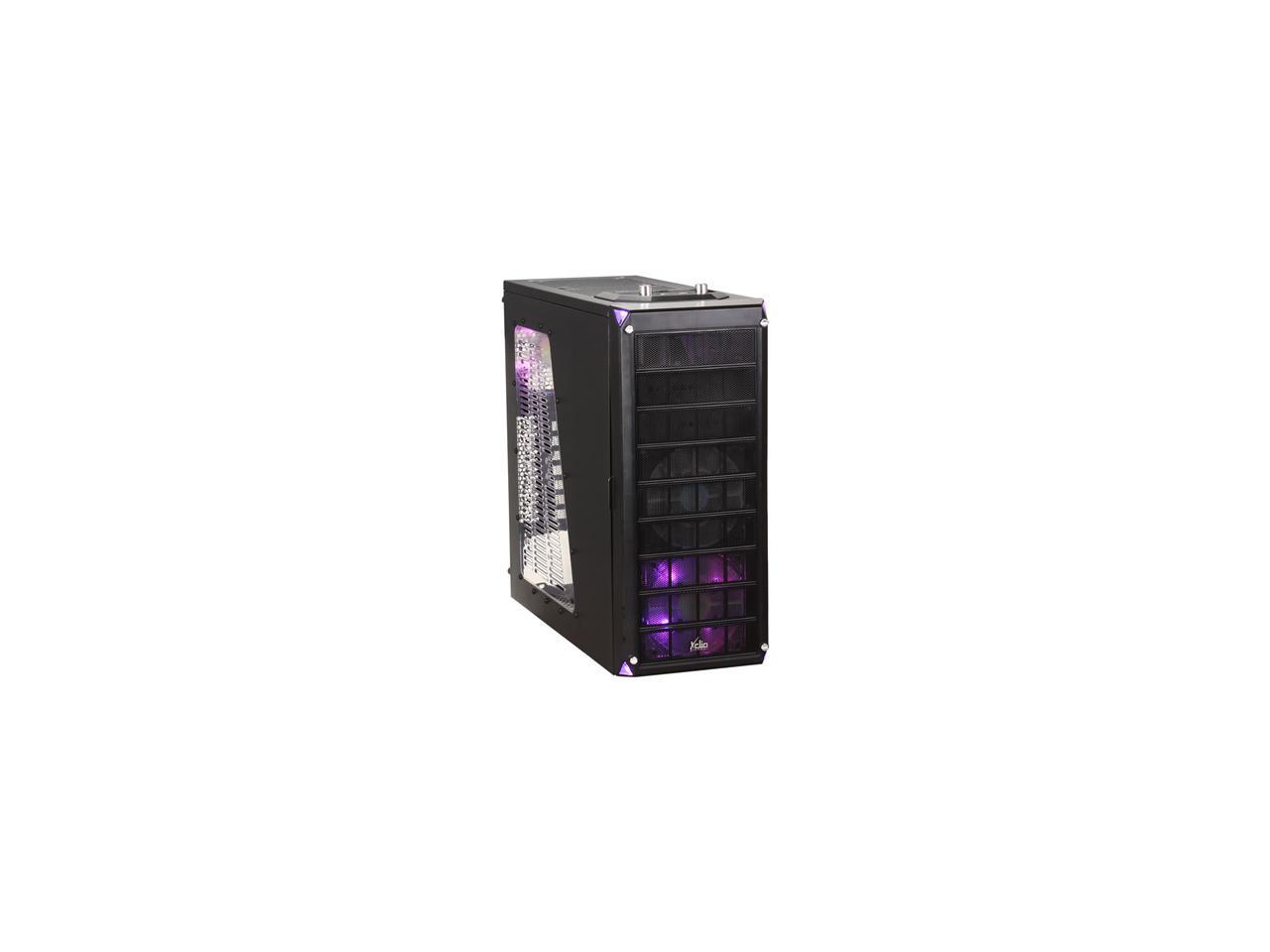 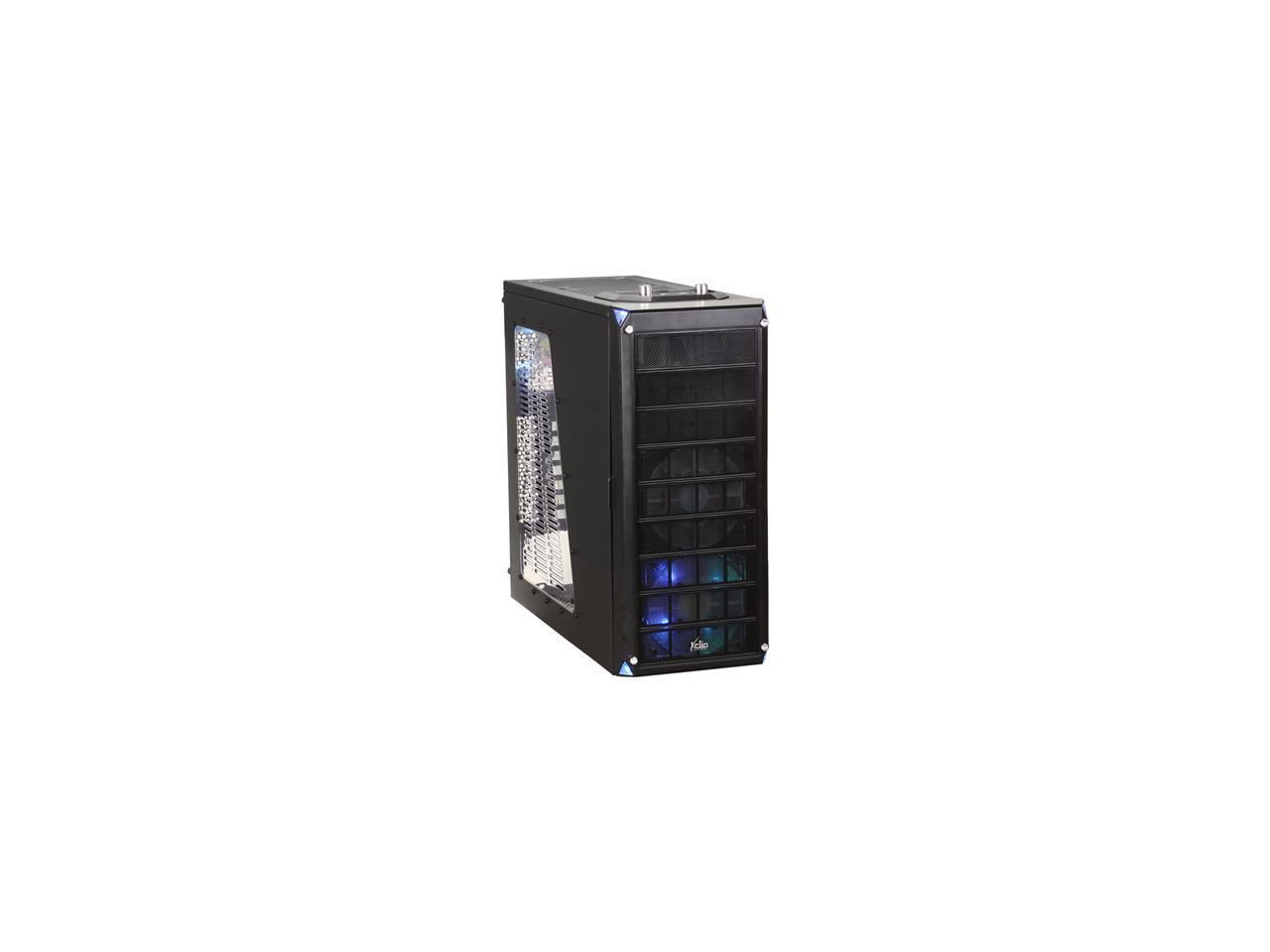 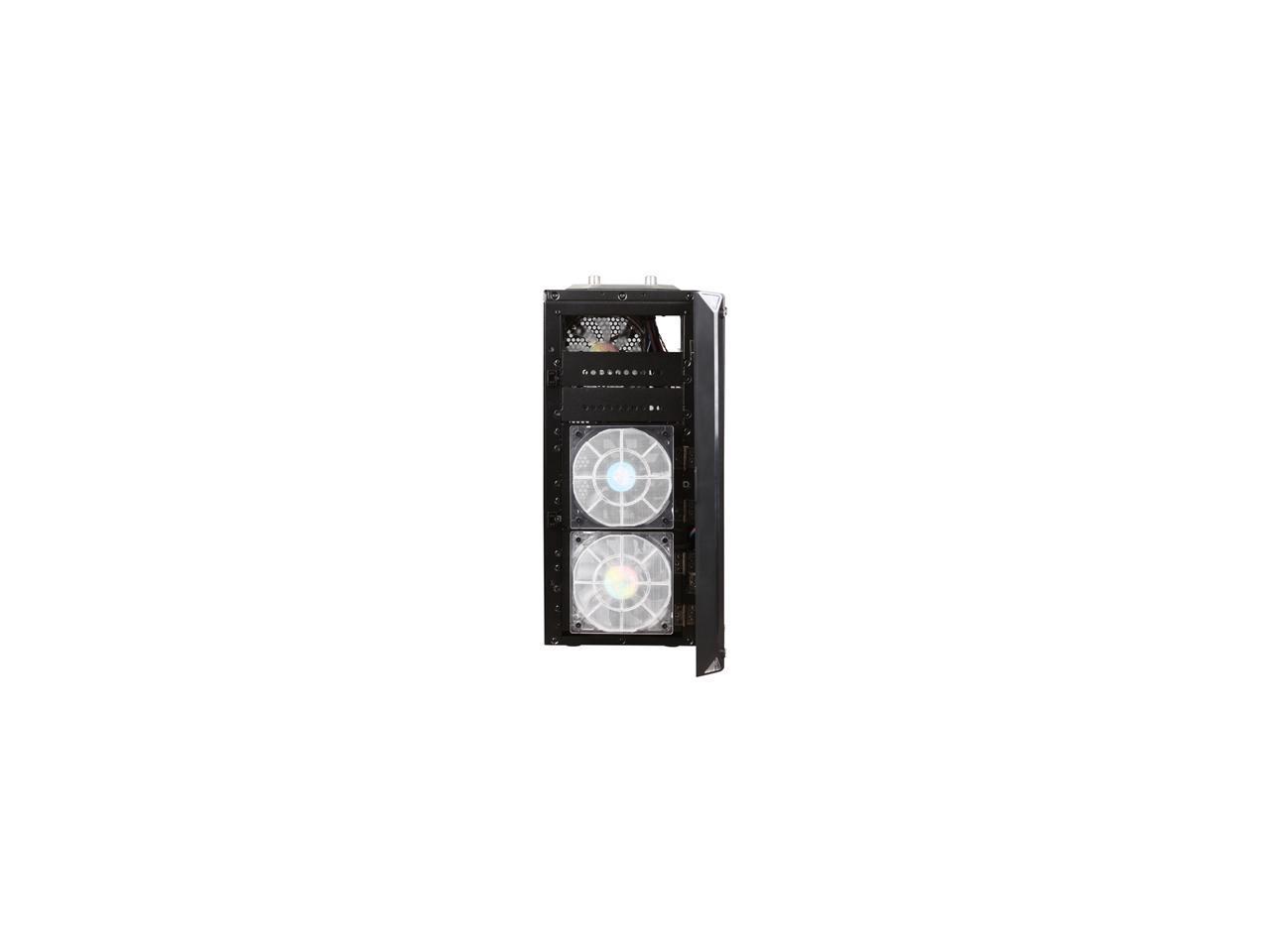 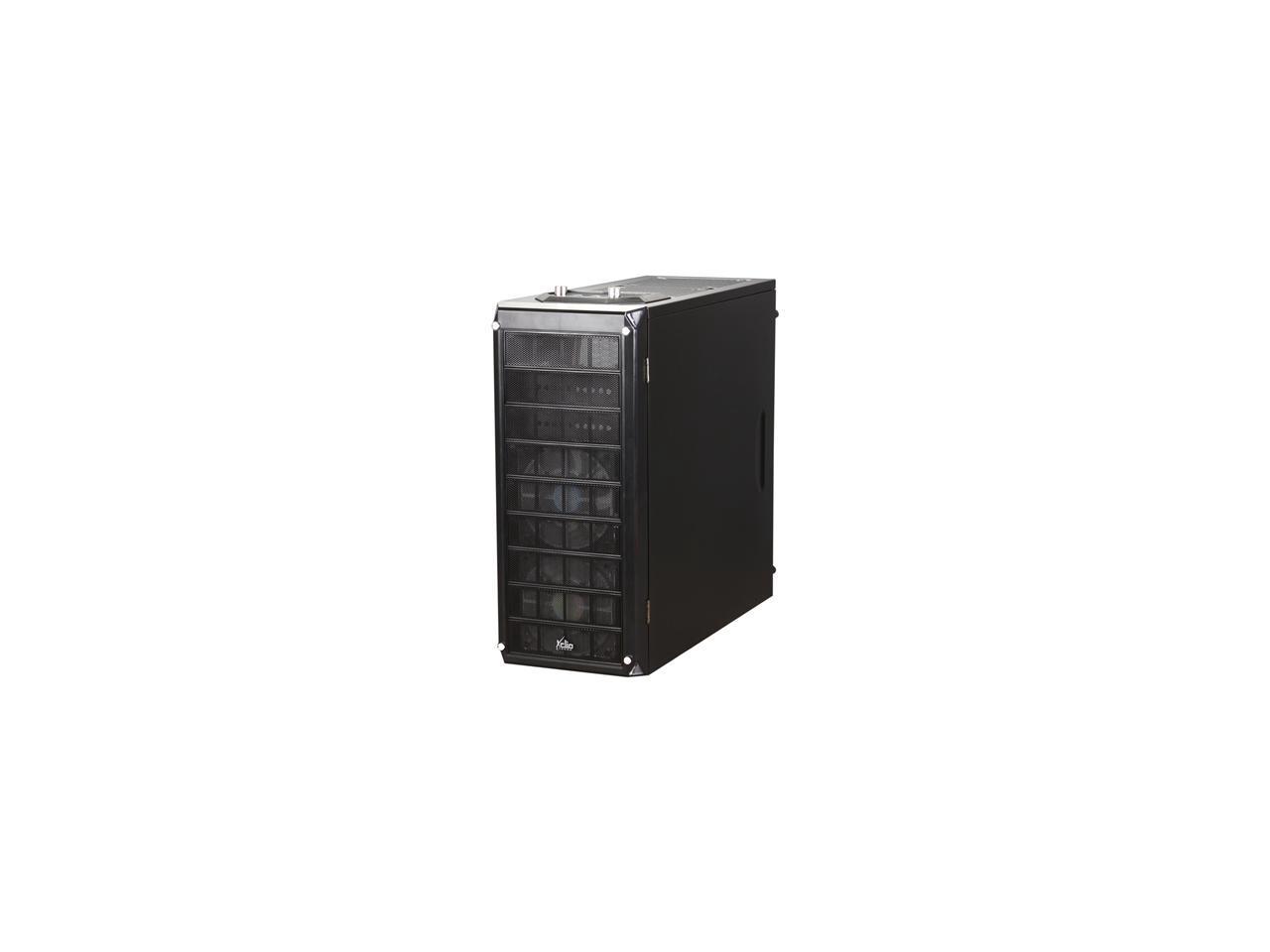 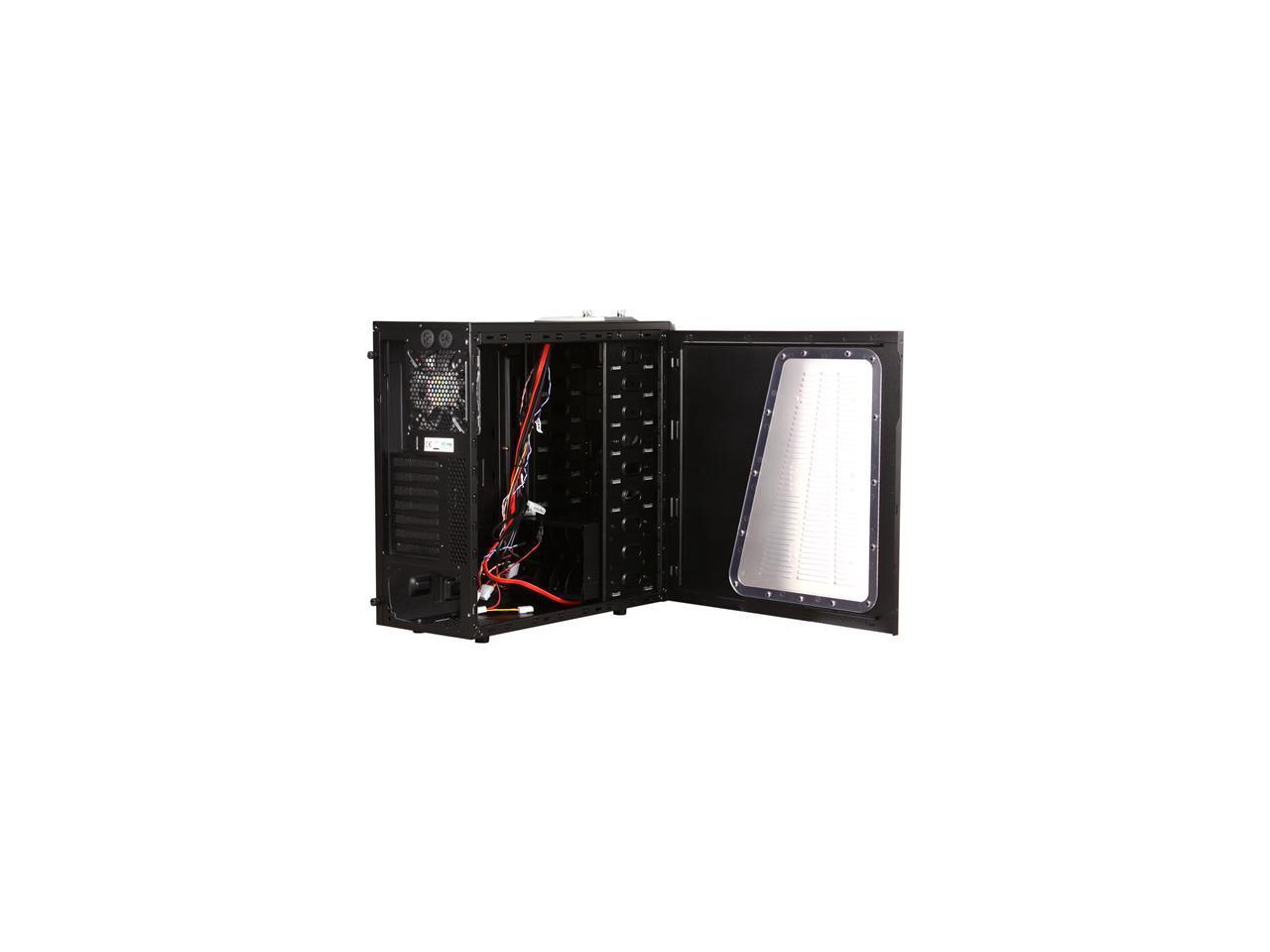 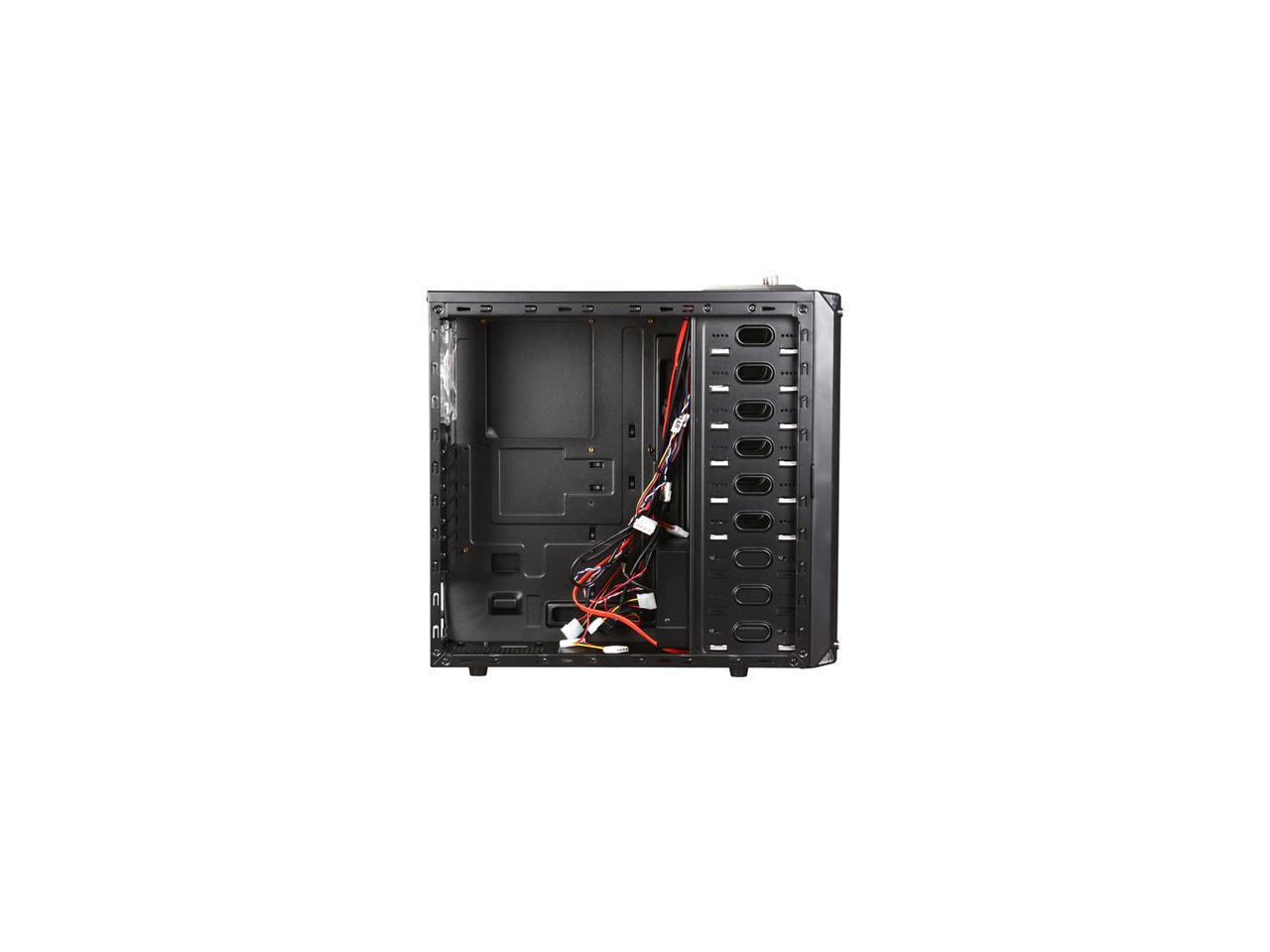 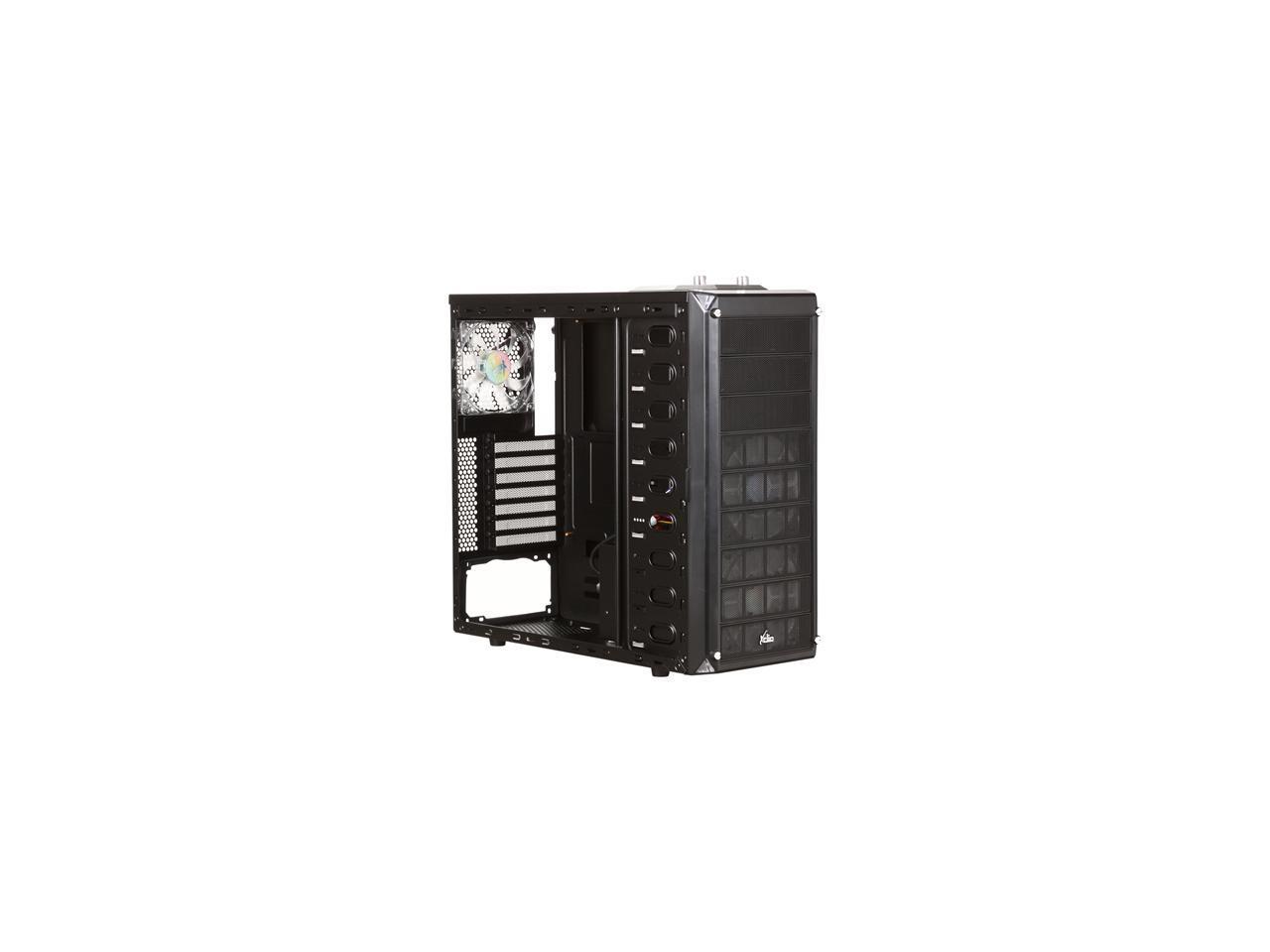 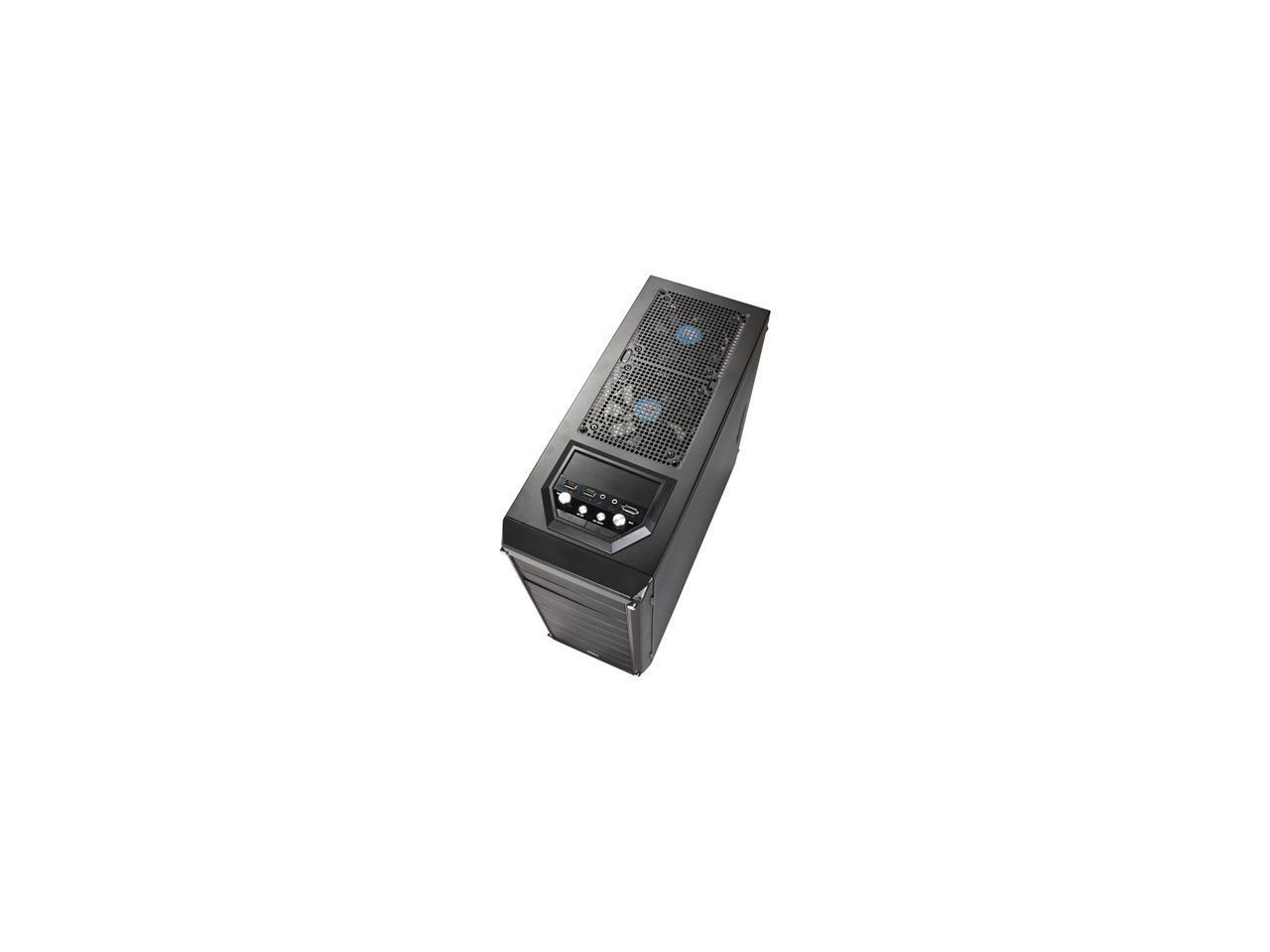 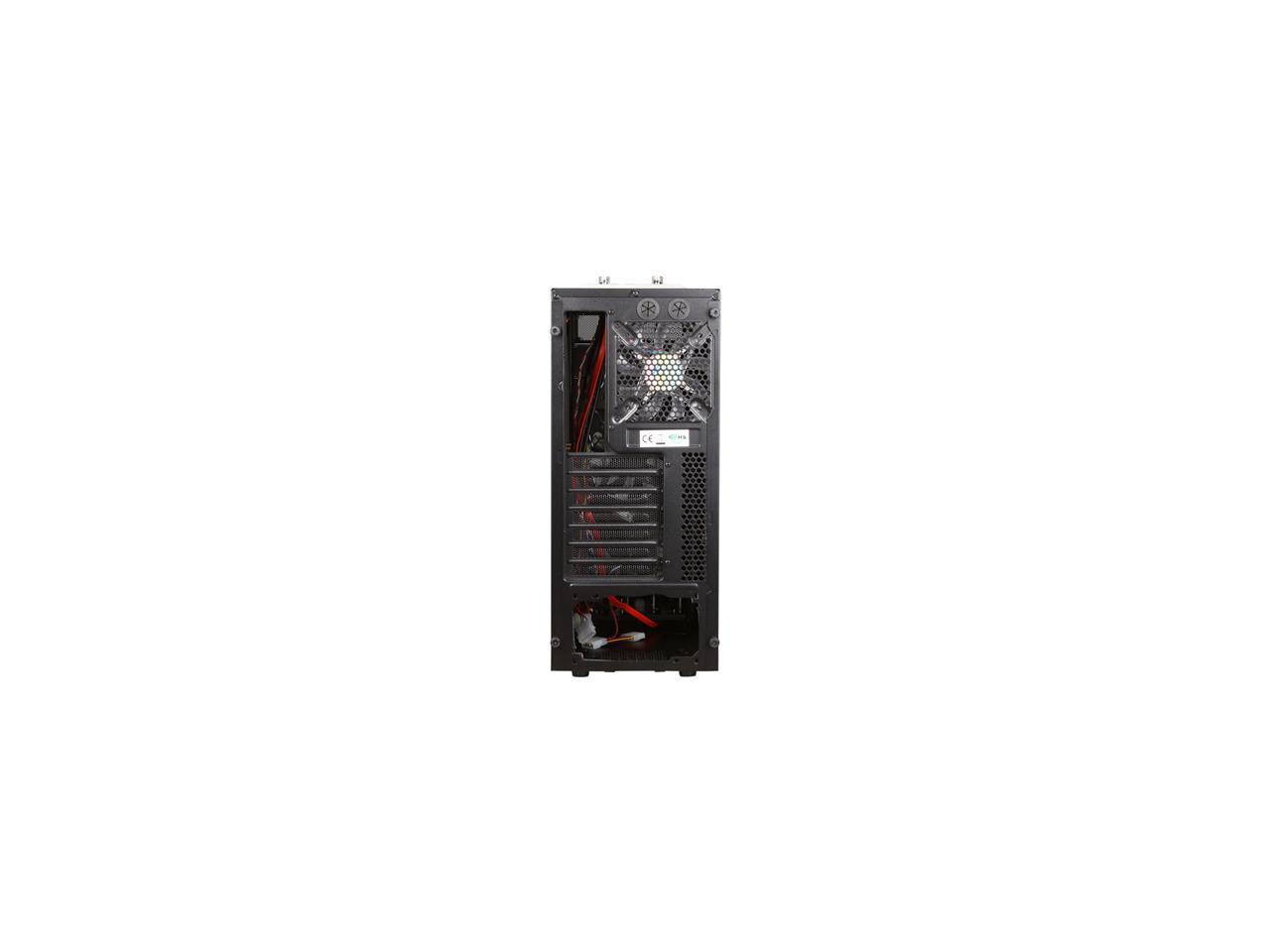 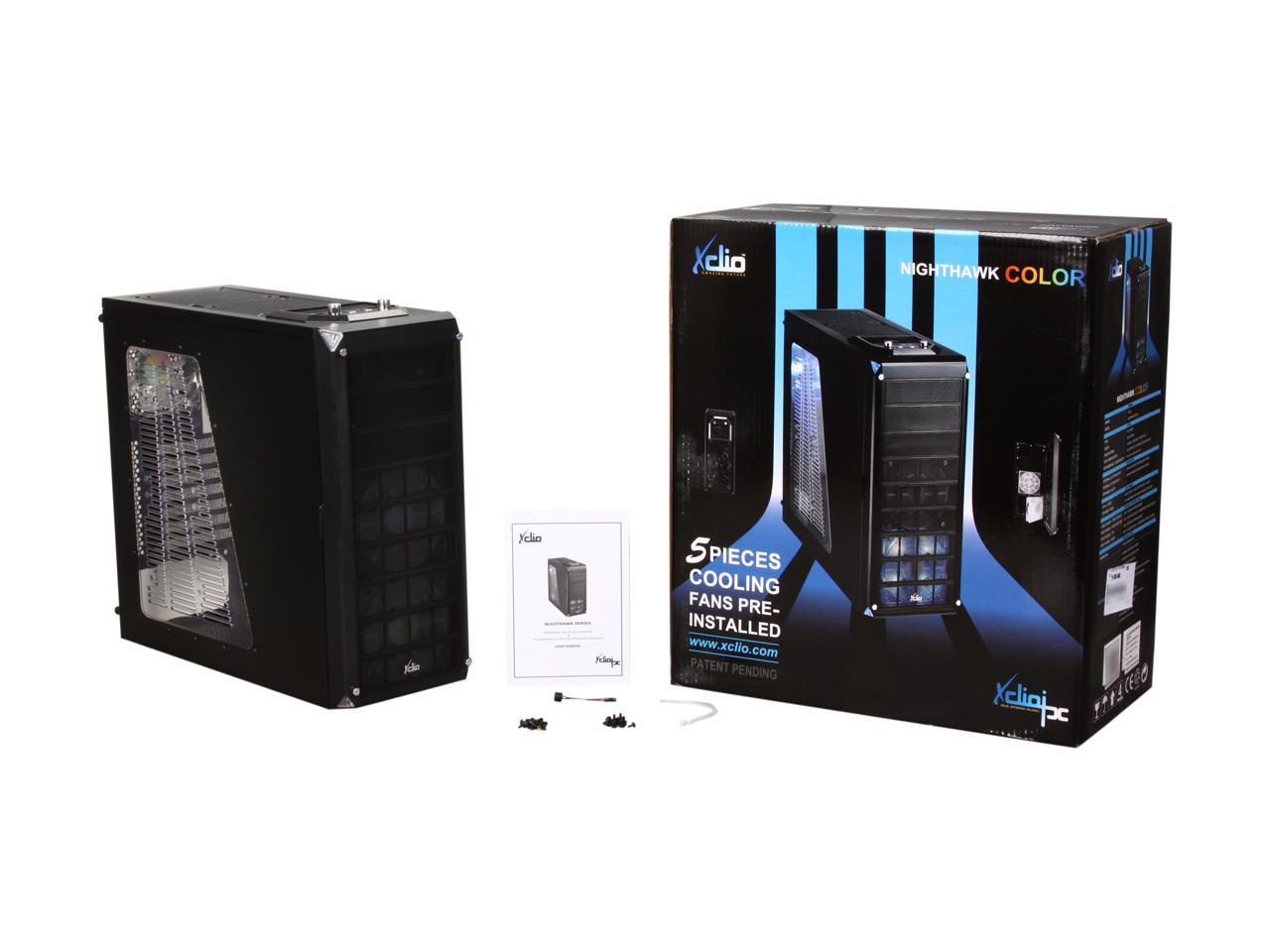 (15) Write a Review
OUT OF STOCK.
Overview
Specs
Reviews
Nighthawk Color supports two 12cm fans (one with 256 Color LED) on the front panel, two 12cm fans on the top panel and one 12cm 256 Color LED fan on the rear panel. It also features a smart controller on the top panel which allows you to adjust the speed of the front and rear panel LED fans. There is one smart HDD modular system featured to increase the mid tower storage, which support up to 4PCS 3.5" HDD and you can also transfer the smart HDD modular systems to different positions to avoid blocking long card installation.

Pros: The Nighthawk is the best case for the money. It comes with 5x120 mm fans which keep the whole case cool and are also very quiet. The front fans and PSU fan cover have filters which are always good. The side panel window has room for two more 120mm but you might have to squeeze the top one in if you have an after market CPU fan. There is enough room for adequate cable management and a huge graphics card. I have a Sapphire 6950 and that fits with plenty of room to spare. However if you were to crossfire them, you would have to rearrange the HDD cage. But once again the 6950 is huge. The LEDs are great for people who cant decide what color fans to put in, or just want a little change every now and then. The drive bays and HDDs go in with ease. Overall, this case has the cooling capability of an expensive case with the color changing ability of an Alienware.

Cons: Your friends will hate you because its so good.

Overall Review: I bought this case because it offered the led colors that would change (kinda childish, I know). Overall I love the case, but it had more than its share off issues. One of the fans was DOA, and the case was missing the plastic trays to hold the 3.5 drives. So I had to jury rig something. I also got an H60 cooler, and had to move the rear colored fan to the top because the only place I could fit the radiator was over the rear fan. There also is not enough clearance between the plastic window on the side door and the sides of my radiator, so I cannot actually close that side of the case. The fans all use proprietary connectors as well, so I could not plug them into my motherboard, which limits my ability to control them from within the bios and windows. Also, the wire management is not what I wanted, but that could be my fault in the way I ran things. Overall I like the case, but I think I will chose differently next time.

Pros: *Plenty of fans and they are quiet at max *Front/PSU filters *PSU padding *Lots of room *COLORS! *Feet are plastic so no worries about rubber pads coming off *PCI slots are meshed for airflow and look great *The power and reset buttons can only be fully pressed down on the edges, this ensures you don't accidentally press them without intent (i.e. pressing it on the center won't push the button down), a small feature that i REALLY appreciate. *Hard drive trays are simple and easy to use, not sure what people are complaining about, just flex one side first. *Front door is great for covering bright lights and hiding optical bays, making them look cool, with plenty of room that won't block knobs for fan controllers as well. *Nice hole between PSU and MOBO for extra wire mgmt. *Paint job is nice and coarse, no sharp edges anywhere

Cons: *Wire management holes could've been bigger, you may have trouble with the 24pin. *Bottom fan mount on side panel is likely to be blocked by PSU *Top 5.25 may not be usable for optical drives since the cables can block the back from sliding all the way in, however shorter devices such as fan controllers or card readers should fit just fine. *Fans don't push as much air as I would like, but I bought more anyway! *Colored Fans do not have standard plugs, if they die you're probably doomed *Only 3 5.25's, but that's all I need luckily *I cannot yet review lifespan of the fans *Pricey shipping, some full towers ship for just $5, sigh *Been watching this for over a month, had everything I wanted, except insane shipping price ($20 and it just comes in its own case box). Told myself to hold out until 5 were left. dropped from 12 to 5, so I jumped on it. After I bought it, stock oddly went back up to 7. No other stores carry this atm. Arrived in tip top shape and I am super pleased.

Overall Review: *I bought two 256color 140mm fans for the top, they fit no problem and won't block motherboard although it looks like it might (tested myself) *I also bought two more 256color 120mm fans one of which I planned to move to the front, however, it turns out the fans purchased separately are thicker and won't allow the front to be closed. The 5 fans included in the nighthawk are noticably thinner than standard case fans. So I moved the rear fan to the front instead. I now have a 120 in the rear, side, and two 140s on the top. These fans push ALOT more air than the included xclio fans and still are pretty quiet. So for anyone else going for the full color fan setup like me, it'll work fine. HOWEVER, the separate fans change colors FASTER than the two included, not too big a deal, but should be noted. *At time of writing there are 6 left, if you've been considering it, grab it now! *I ran out of characters to praise this baby more :(

Pros: I bought this case despite only 2 reviews at the time because it looked well built from the pictures. -Mesh front and Bottom mount PSU -Exceptional cable management! There are many places to tie wires and circle hooks to put cable ties around to organize wires for better airflow. -- I hid most of my wires between the back of the mobo and the back panel. There are lots of circle hooks there too to tie wires to. 900 watt psu and was able to make a pretty decent hole for airflow on the inside of my case. -Great and impressive color scheme, love the cycling through colors. -Love the hinged front panel and the front fans screw off and hinged for easy cable management and customization -Even with 5 fans, still very quiet

Cons: -Fans dont spin too fast -Not really 256 color but still great color scheme. Flows through colors but its hard to stop on blue and green since they only show for a second or so. No big deal though -The HDD cage is a pain when putting hard drives in the holder. But once you get them in, your fine (took me 5 mins a drive)

Overall Review: Would recommend this case to anyone!! Great Case! I have a evga gtx 570, z68 mobo. Both fit perfect! with room to spare. Might not be able to SLI such long cards due to HDD cage in the way.

Cons: The only thing I could think of was that there wasn't a whole lot of room behind the motherboard to hide wiring, but it is a mid-tower case, and for the price you can't except much. Also it was discontinued :[

Overall Review: I would love to buy this case again, but sadly as far as I know it's been discontinued, I absolutely love it and have had no serious problems with it.

Pros: This case is absolutely beautiful. The fans provide more than adequate cooling. The LEDs make it neat to look at and sets a nice mood in a dark room. I don't feel that It's lacking anything. Cable management was easy and non complicated. The fans aren't very loud. I watched a movie that was generally low in sound and barely noticed them running.

Cons: One of the fans on the front of my case was bent and warped a little funny. Looked like someone tried to pry it off at some point. It still spins and works so I'm not complaining. Fans pretty inexpensive to replace.

Overall Review: The side panel is hard to put on.

Pros: These are good cases for being able to just put the motherboard in and go. I like the filtered intakes on the front. I moved the colored fans around in both. One they are in front the other they are one top. I had enought wire on all the fans to do this.

Cons: The LED lights seem to have a lead light that changes just before the others. Not having the option to control more xclio color change fans from the controller inside. Having none standard plugs on the black fans. Drive bay being out of square. I pulled the drive cage out of one and added to the other as a WHS box. By putting both in one and with an ICYdock that is a 3 in 2 cage it shows just how out the rails are and that they are just a touch close to each other. Got it all in, but had to fight more then install.

Overall Review: Would have like to have had standard 3 pin plugs on the non color fans to make use of the motherboard headers and to be able to route the wires better. As it is they all are daisy chained to each other, good part is there was enough wire to do this. I also would have like to have the SATA cable that goes to the top replace able so all my cable would match, but not a big thing. The color change fan a nice as I can get the color I want and lock it, but one of the led on each fan and the case changes just a head of the rest so they are not always all the same. I would like to have been able to add more color fans and have them on the same controller so they all would match, but if I did add any I would have to use a controller for each.