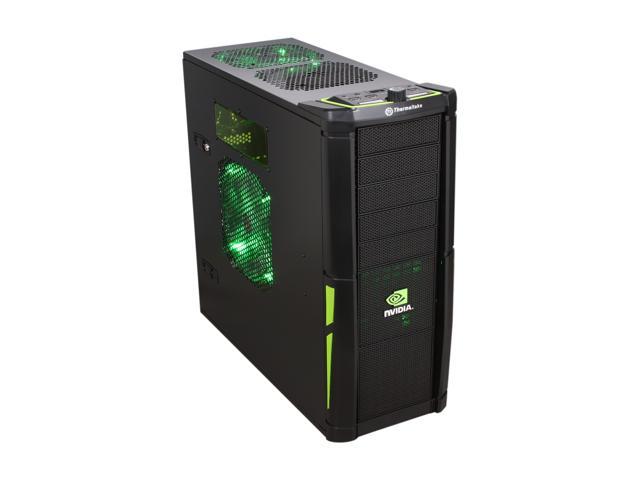 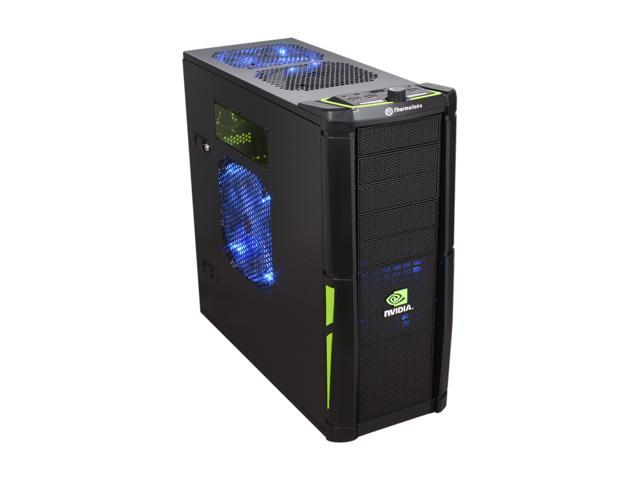 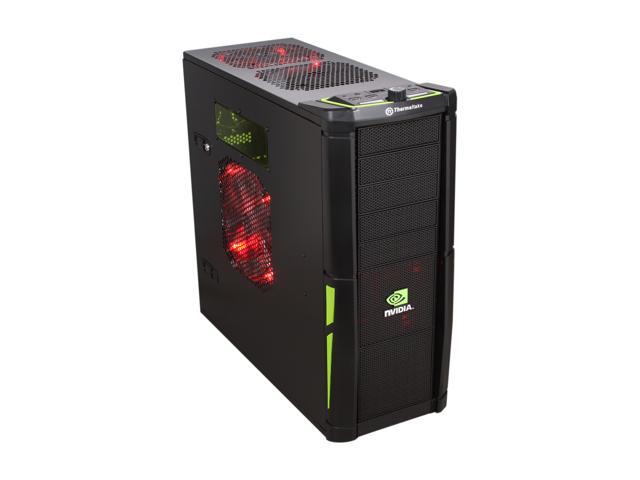 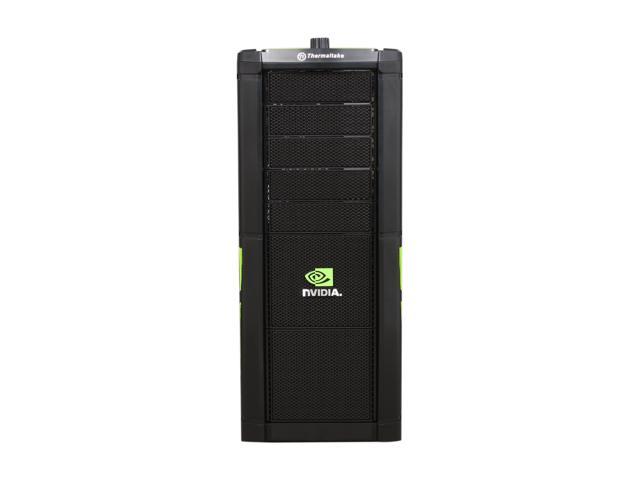 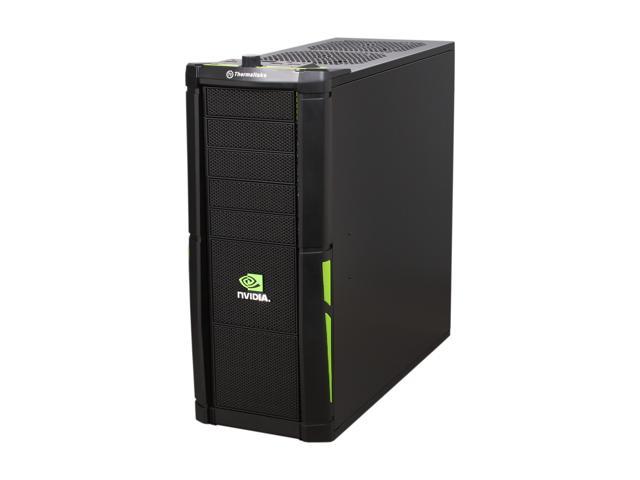 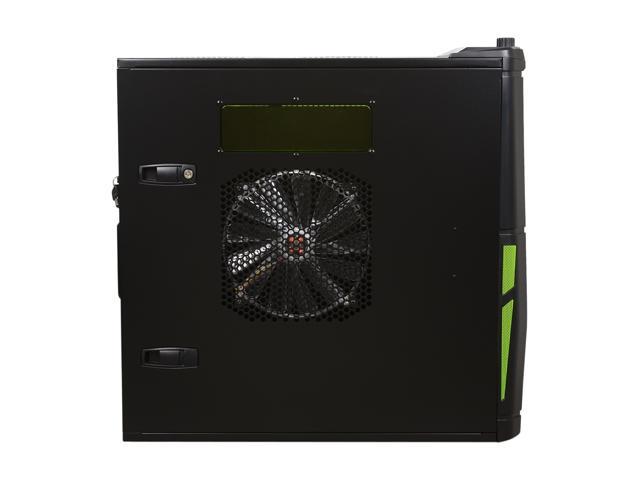 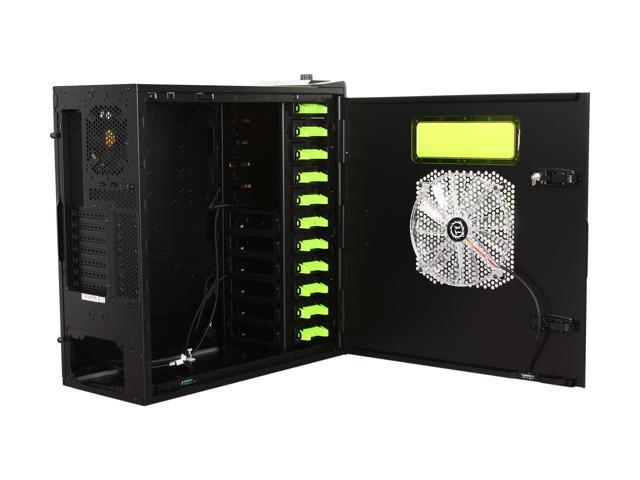 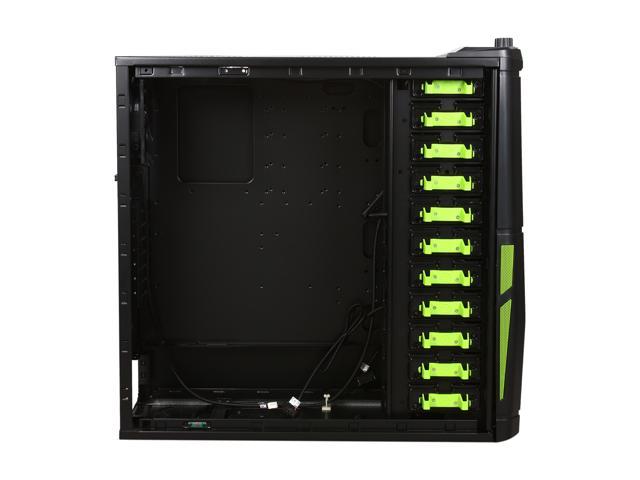 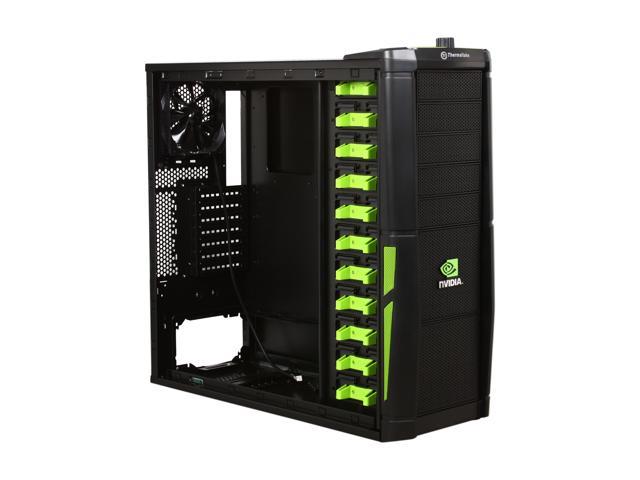 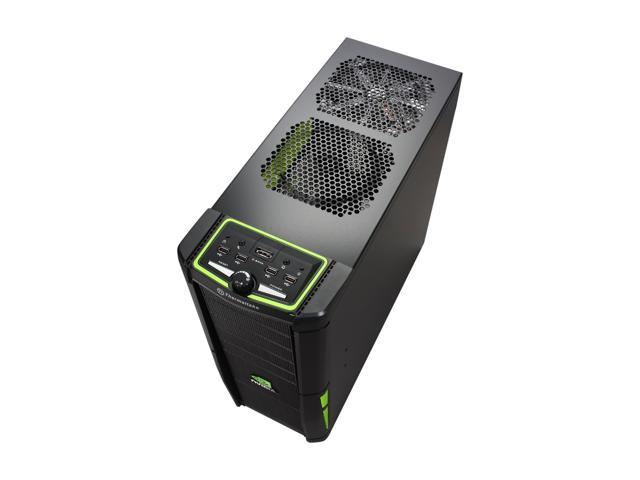 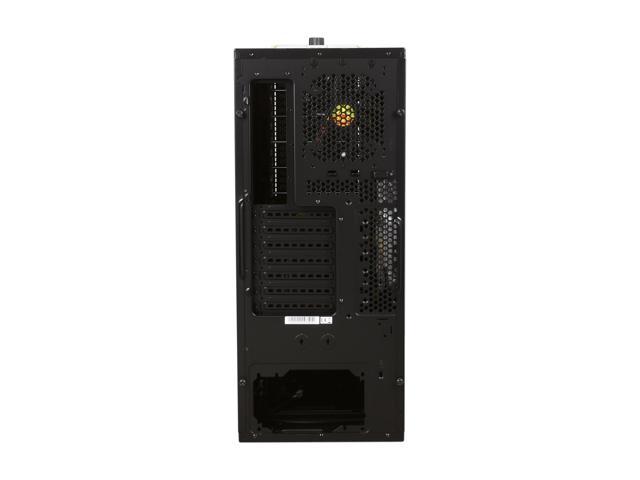 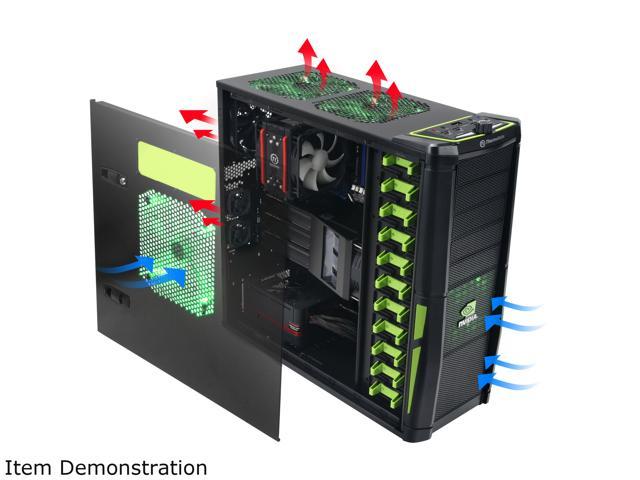 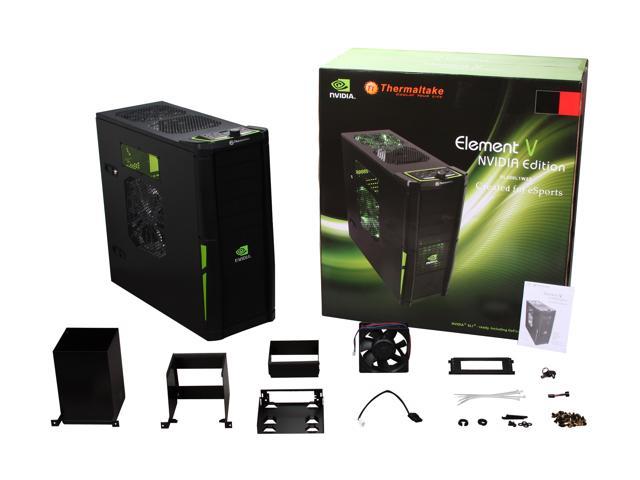 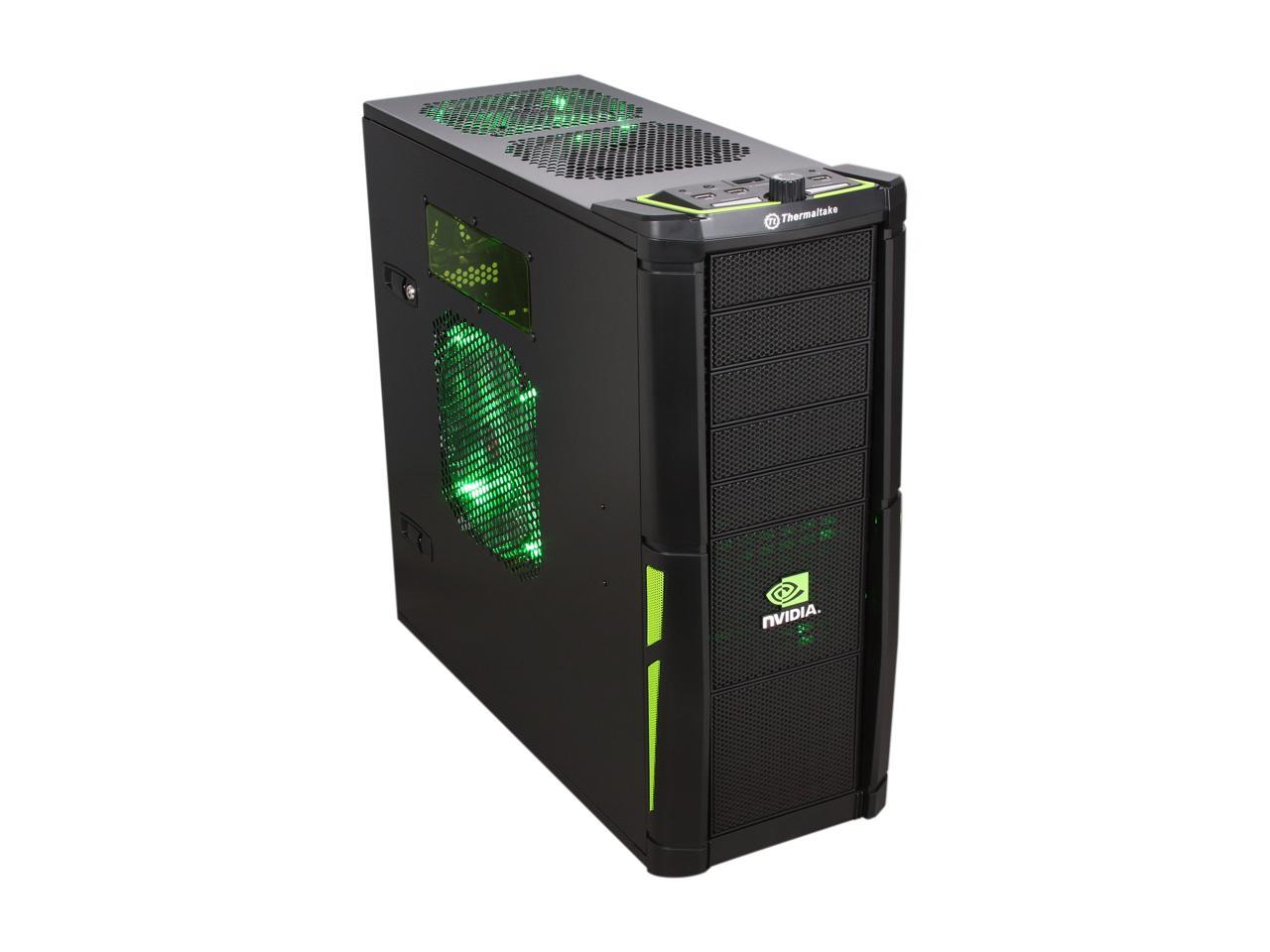 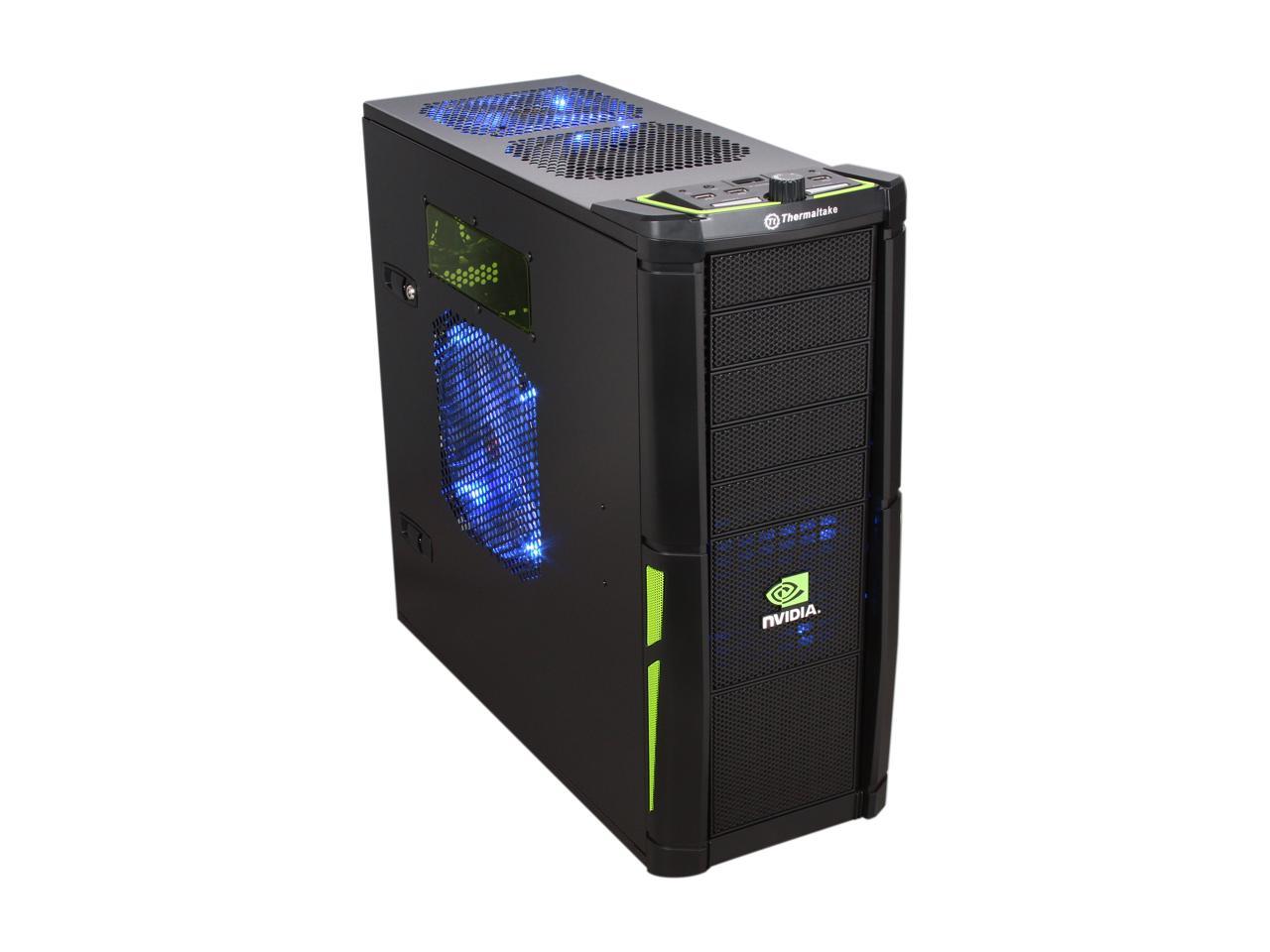 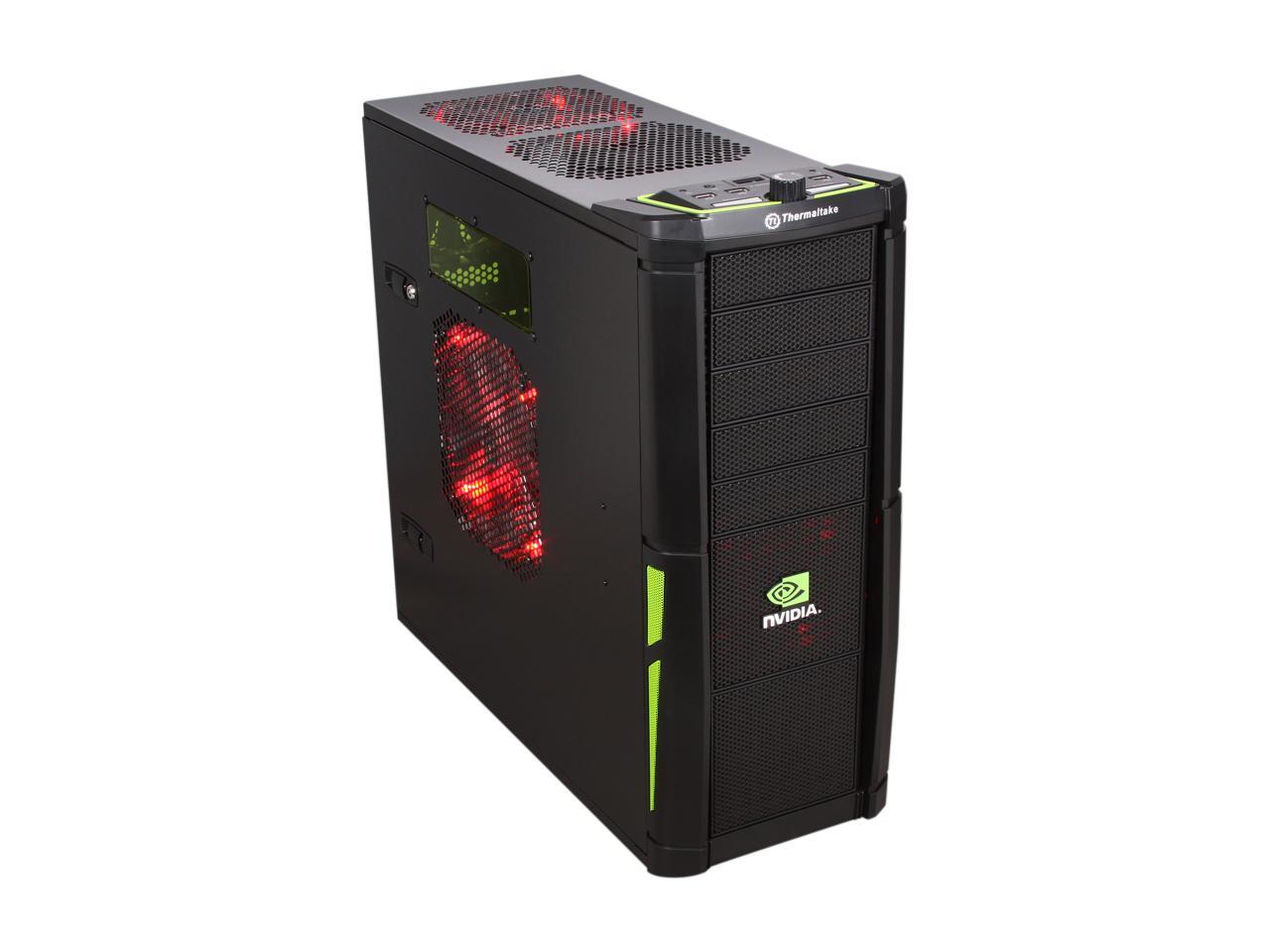 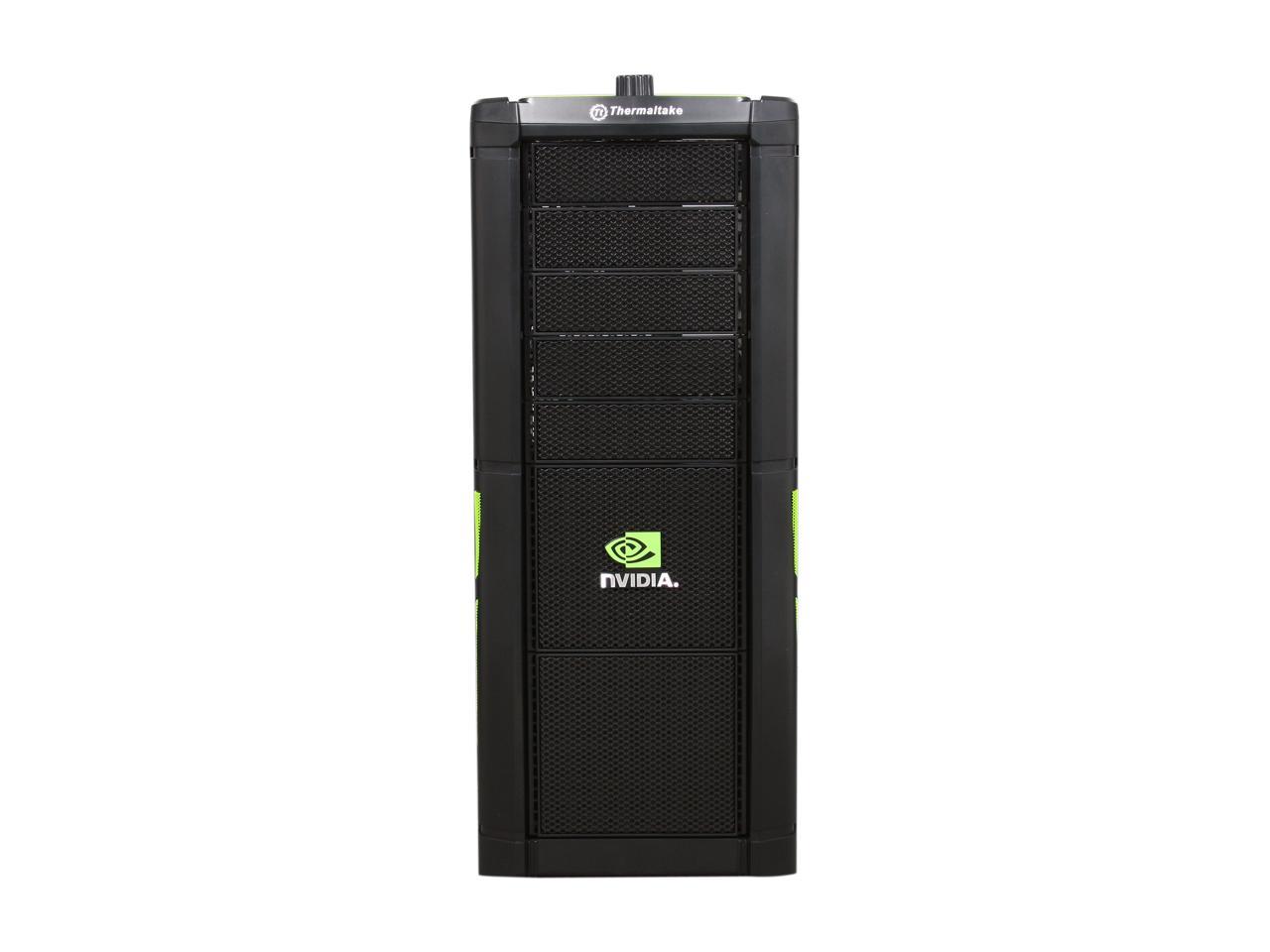 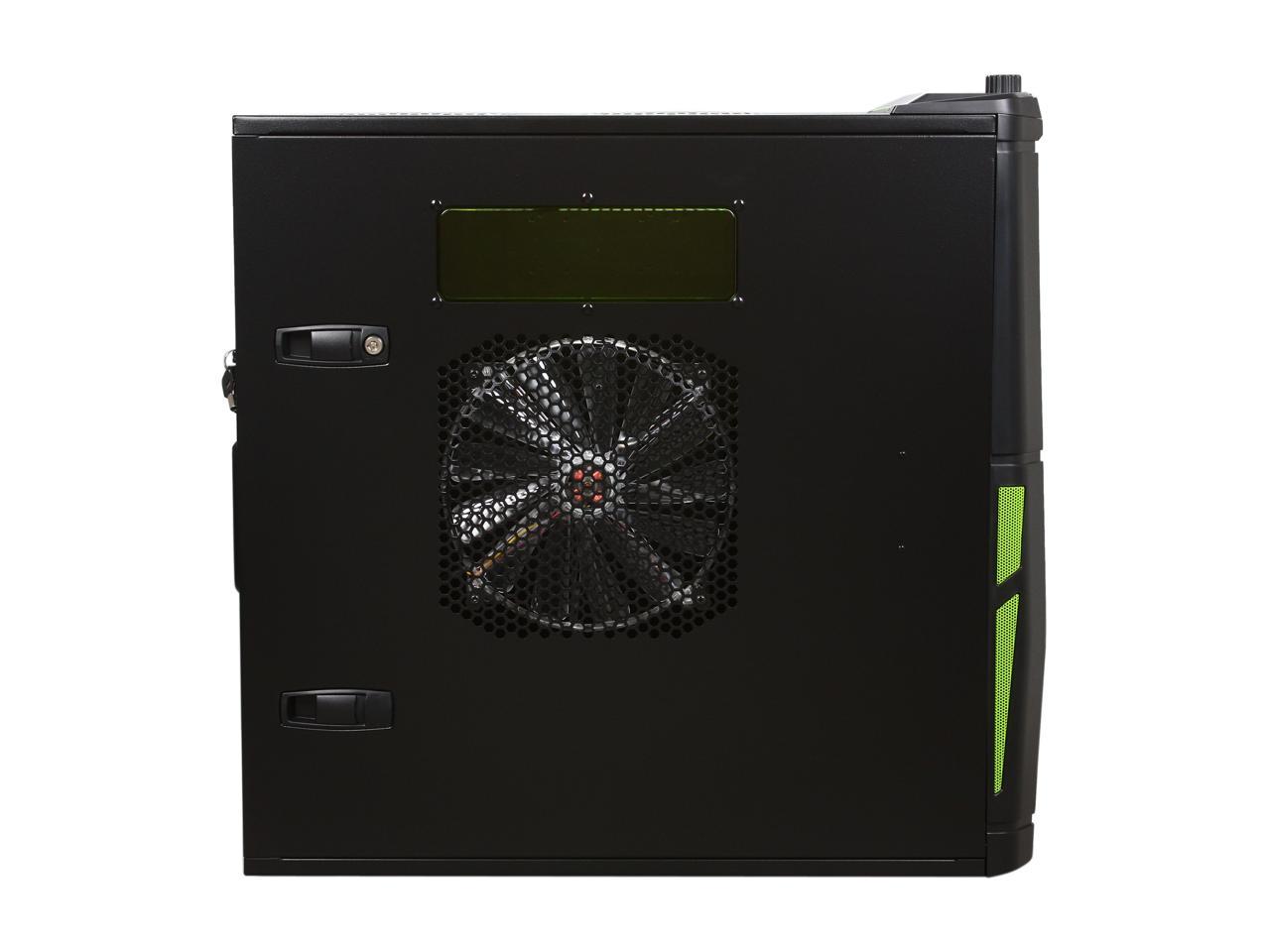 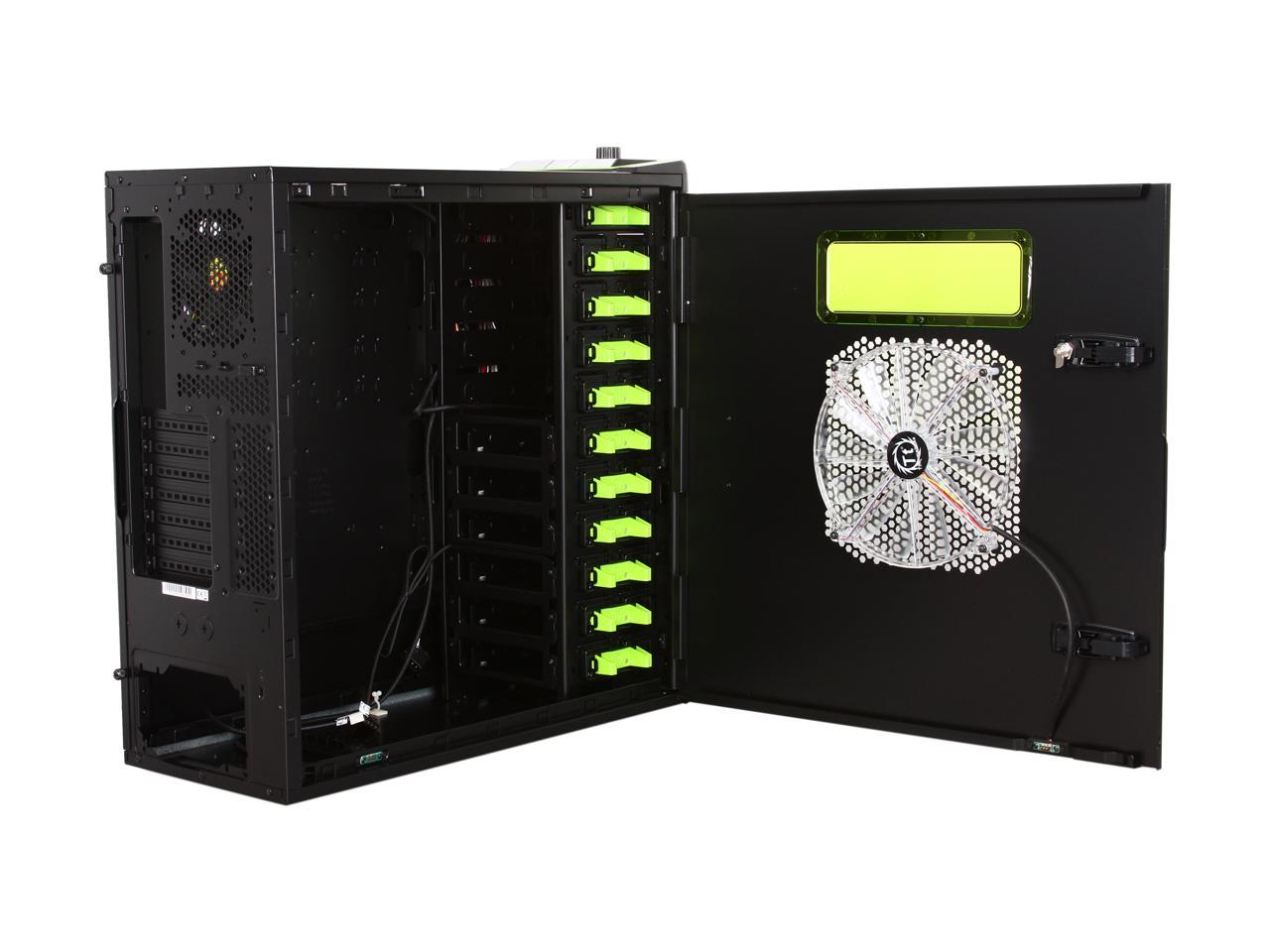 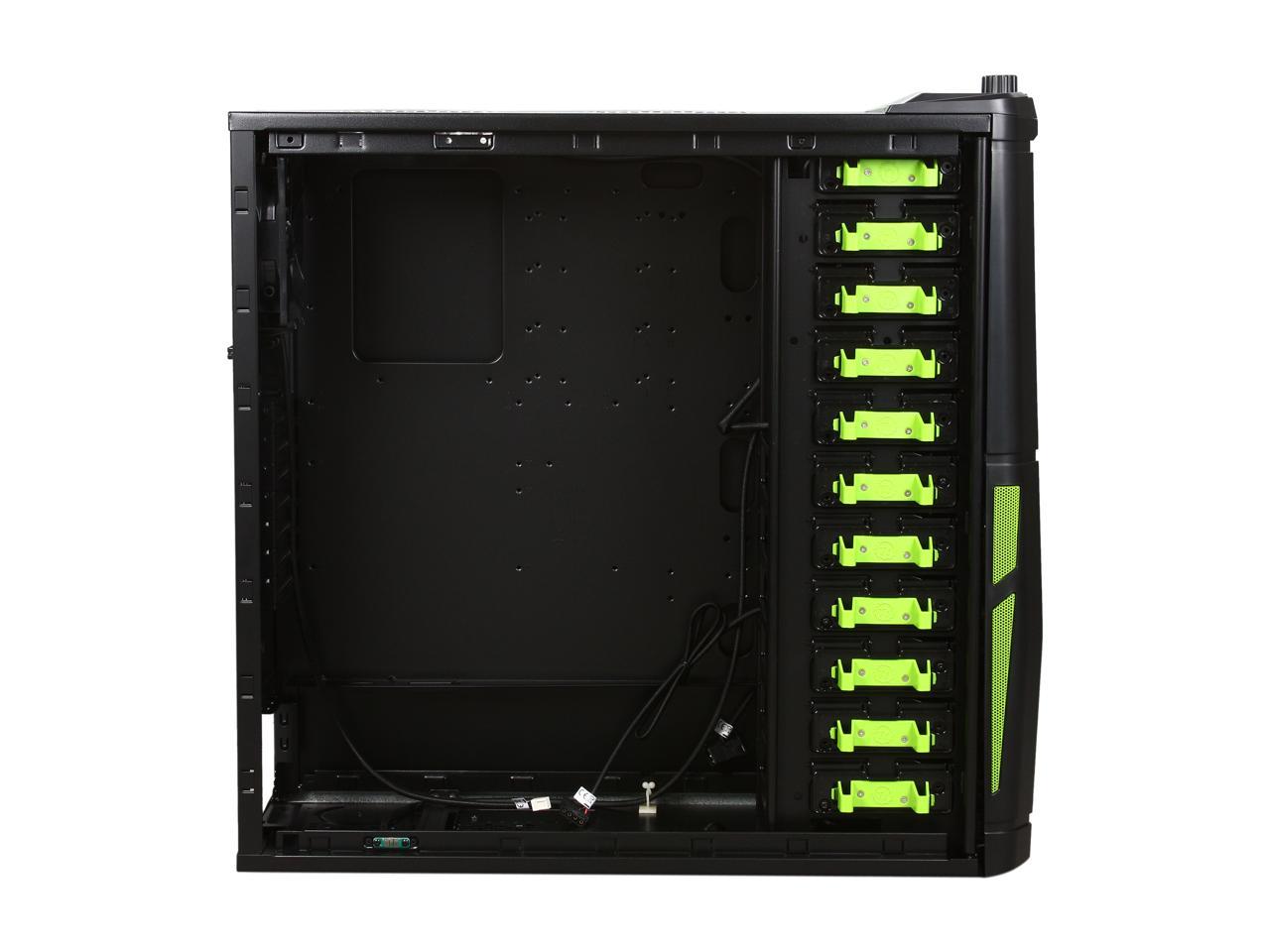 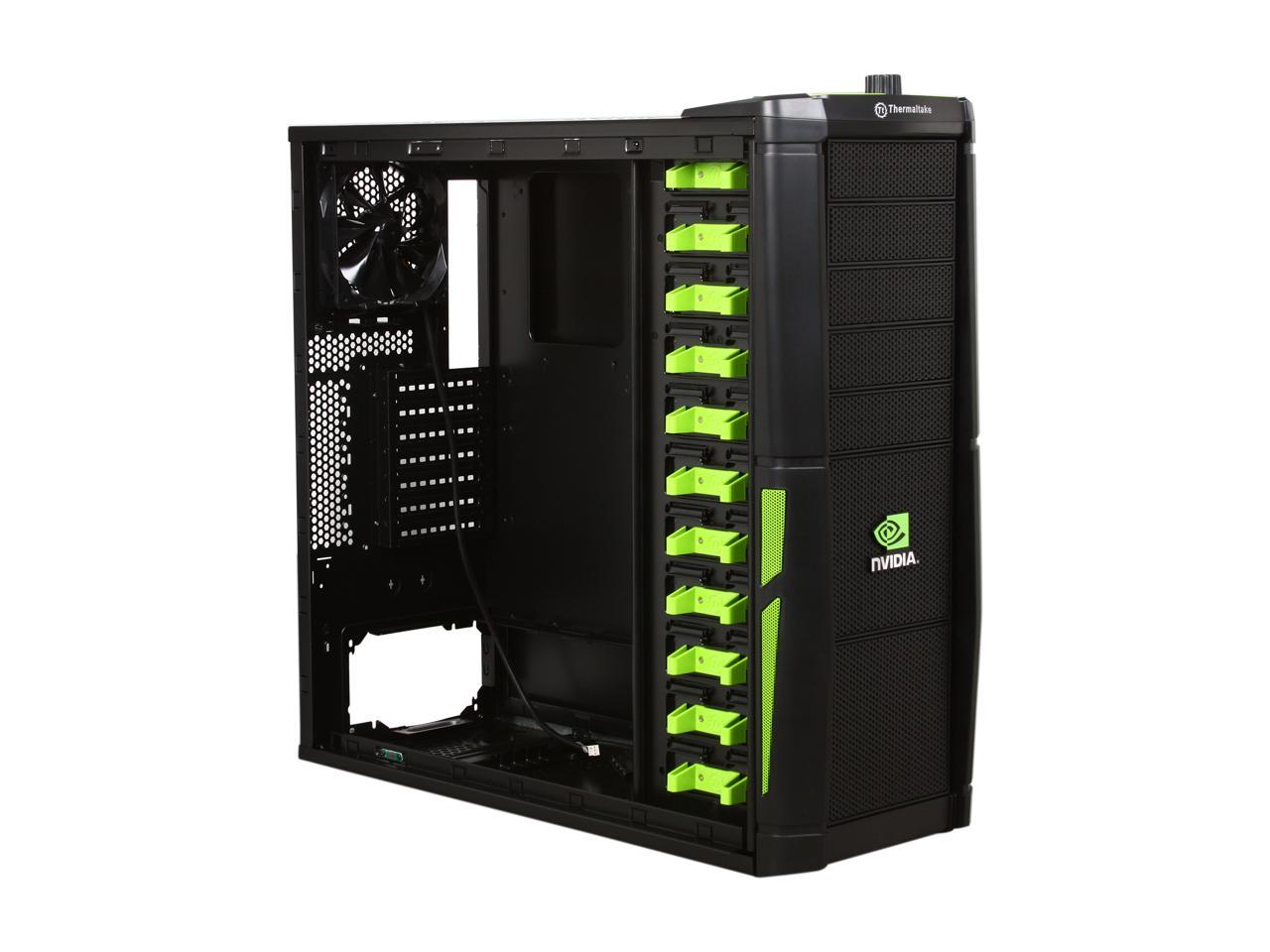 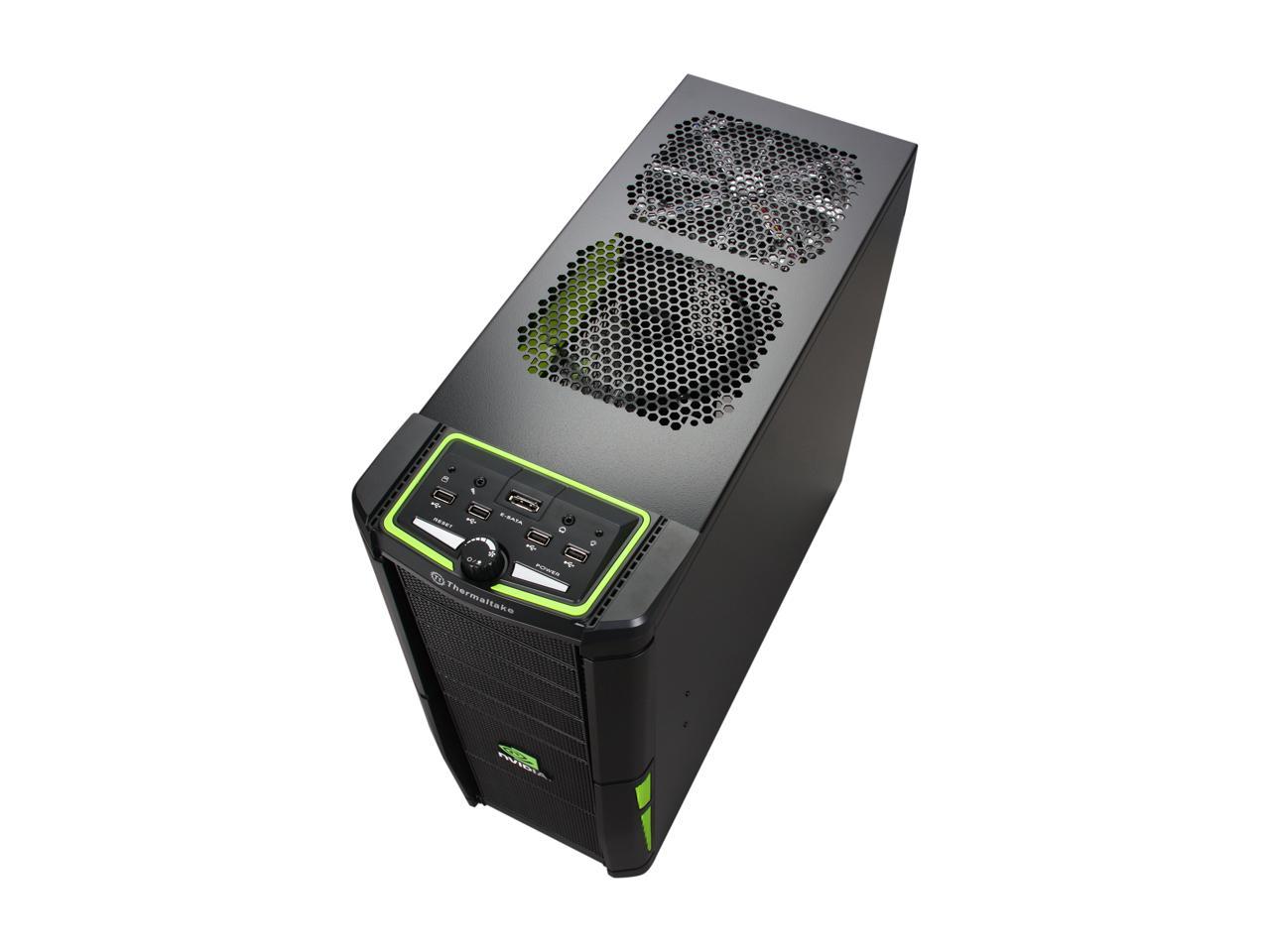 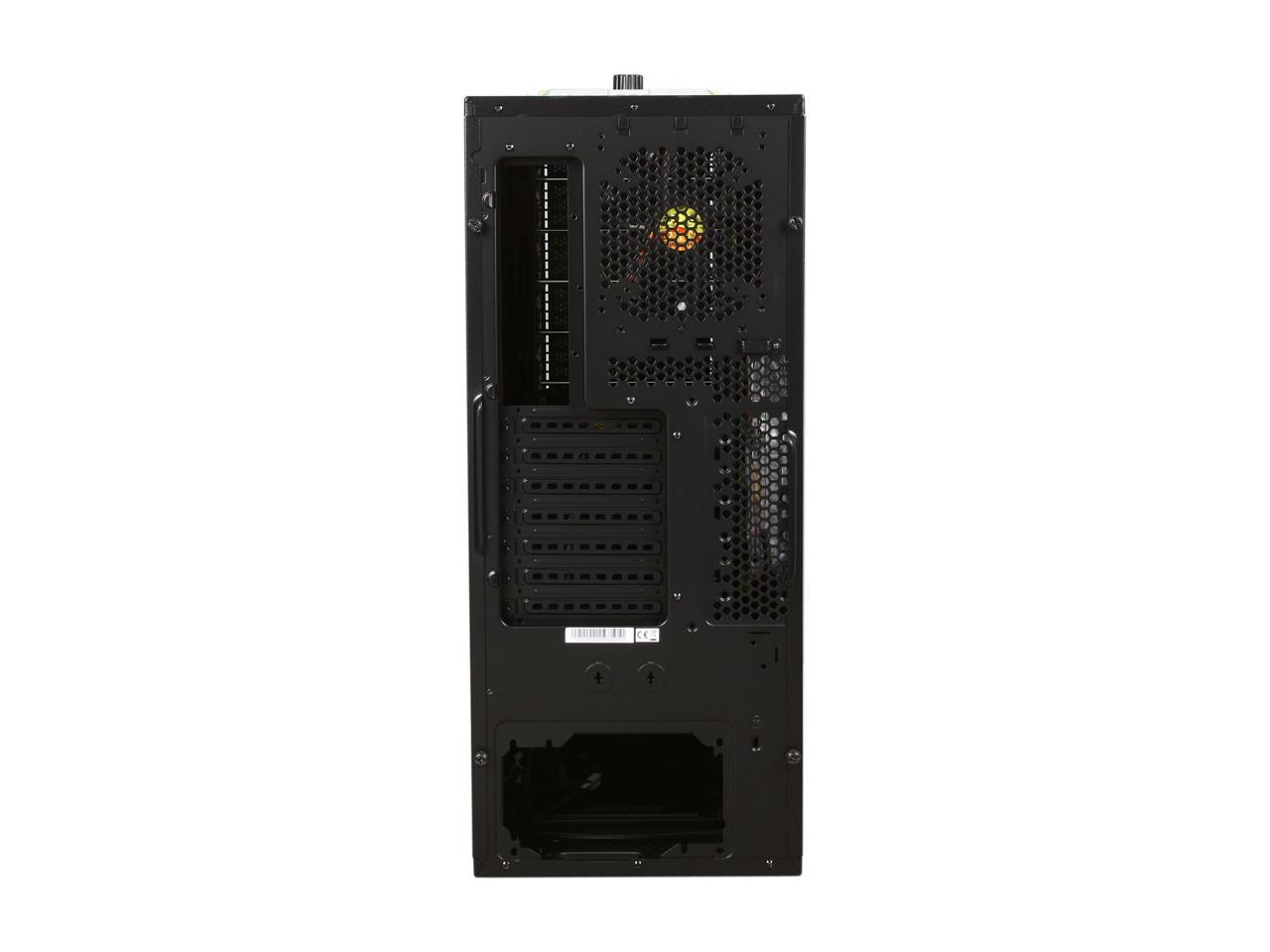 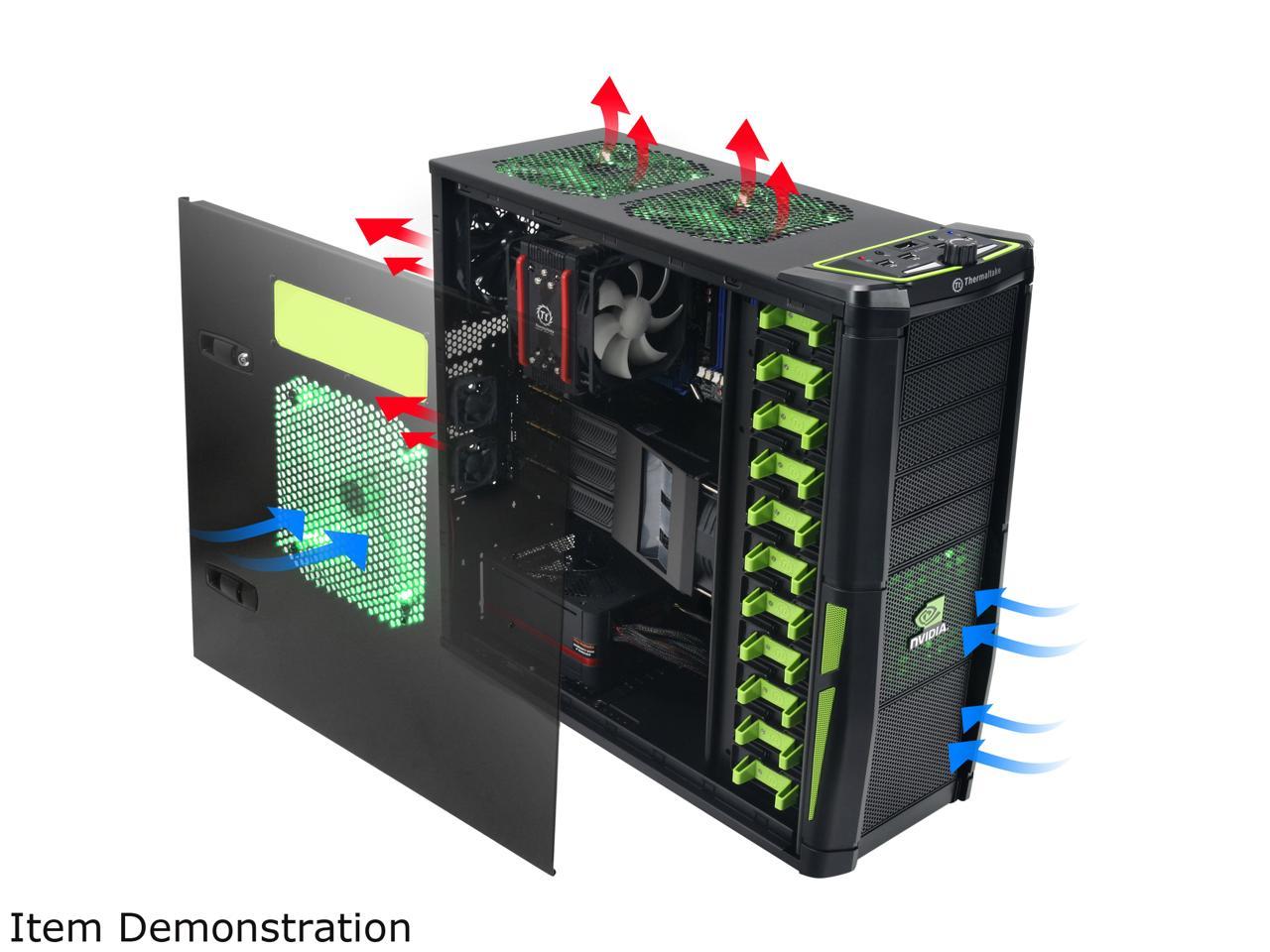 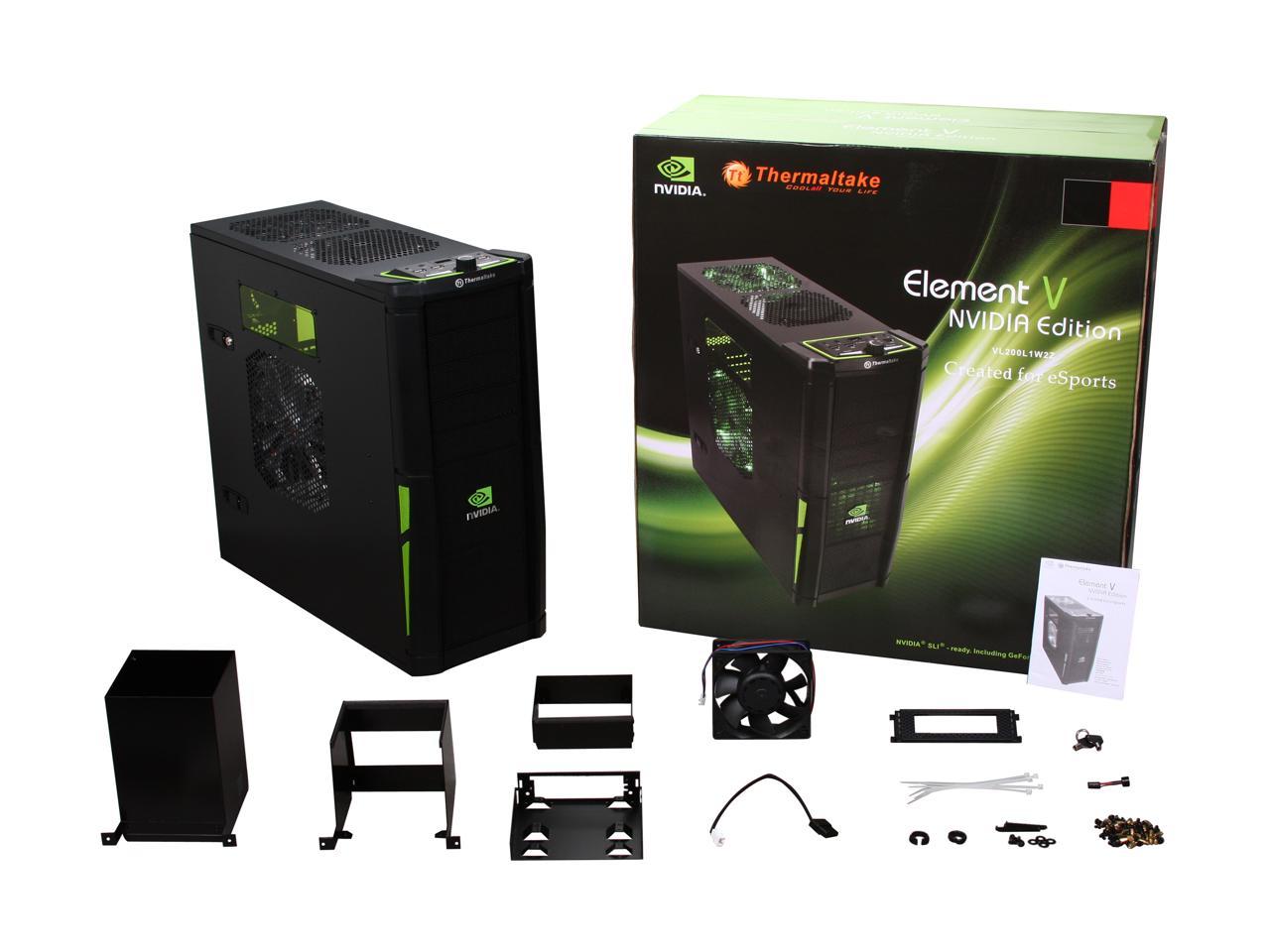 (46) Write a Review
OUT OF STOCK.
Overview
Specs
Reviews
Build the ultimate gaming rig with the Thermaltake Nvidia edition VL200L1W2Z case. This full tower case can accommodate Mini ATX, Full ATX and Extended ATX motherboards. You’ll also be able to add as much storage as you need to install all of your games with stacks of drive bays. The included 2.5-inch drive bay future proofs your system for SSD and blazing speed!
The side panel can house a 230mm intake fan to drive cool air over expansion cards and the CPU. A 200mm Colorshift fan draws air over your hard drives while three fans – two on the front and one on the rear – vent heat out to minimize system slowdown. Best of all, you’re in total control over your system’s cooling with the integrated fan speed control knob built into the front panel so you can turn up the air flow for demanding games. The Colorshift fans change hues depending on fan speed, which will make you the hit of your next LAN party.
In addition, as a result of collaboration between Thermaltake and Nvidia on the engineering level, the Element V Nvidia Edition chassis is Nvidia SLI certified, including latest GeForce GTX 470 and GTX 480 running in 3-Way or Quad SLI configurations. Building a system running on any other graphic card configuration will also benefit greatly from the extensive array of cooling fans strategically placed to achieve the highest level of cooling efficiency.

Pros: Got the case and thought to my self its bigger then what i expected at first. *Easy cable management *Fits Mini, Micro, extended and full ATX form factors along with ATX and few others. *Easy tabs for bay installation. (First pinch together then pull out and up. also for the bottom drive bays, pull off the front panel from the bottom. take out the screws by the bay clips and pull out the bay clips. After that it just slides out. * Lots of fans to keep things cool and look just as good with the ColorShift fans, also quite. *Solid black interior with no sharp edges. * Easy to move in

Cons: * Price but it makes up for it all by its self in the end.

Overall Review: I bought this case for a full system build to replace my current system.

Pros: This case is massive i love it transfered all my hardware from a cool master nvidia mid tower case, it was getting pretty full inside, clips for hard drive and cd dvd player do what there supposed to, i always use screws to anyway, running sli but didnt use the cooling ducts will use it later when i set up triple sli, moved the top fan foward h50 radiator i mounted on the back of the case after i removed the back fan hit that top fan no biggy just moved it was able to add a 120 mm fan to the front of the radiator so i can have one fan blowing in and one fan drawing out couldnt do that in old case, the top fan and side fans work great like all the color changes, , over all very pleased with this case so far

Cons: Very heavy will not be moving it around much,power button and reset button, are easy to hit when your changing fan speed and color's, just have to be carefull dont do it in the dark

Overall Review: this is my first full tower case im very happy with my purchase, i had to rma first case UPS dropped it and tried to cover up that they damaged the case, not new eggs fault that UPS is careless with packages, new egg sent me a new one right out just took a little longer to get it but i was in no hurry, i think price was good and get 25 dolalrs back with rebate, thanks new egg for selling great products Quad 6700 2.6 OC to 3.0 8 GB OCZ SLI certified ram ddr2 800 OC to 950 2 Galaxy Geforce GTS 250 SLI h50 CPU cooler 500 gb drive MSI P7N SLI Platinum MB Thermaltake V Nvidia full tower case :)

Cons: After more than 6 months of owning this case I've noticed that the dust build up is absolutely horrendous. Way more than a normal case should have. I didn't re-position any fans so it is not my error. It probably has to do with the fact the the top of the case is almost completely open with the perforated grate. It is this reason alone that I am now considering a different chassis for my hardware. Another Con is that the built in Ducting system for the advertised GTX 480's will not properly house newer generation cards like the 680. Seems like a waste of materials.

Overall Review: Now, for the reduced price, it is definitely worth the price. Definitely a 4 egg case. But it is from my personal experiences with this case that I can only give it 3.

Cons: Door fan wasn't installed properly all the bolts were loose with 1 missing.

Overall Review: Little pricey but very strong case with a sleek clean look outside and in.

Pros: This is a large open case with thick heavy side panels. Over-all sturdy feel. Has great airflow and contains additional parts for SLI cooling. I love the dust filters on the front of case and under psu. Plenty of room behind motherboard tray for cable routing and management, in fact, cable management was an almost enjoyable process with this case. An electrical contact is used for the side panel fan so don't worry about having to disconnect your fan power connector every time you open the side up. Plenty of other positives as well.

Cons: Price: This case is expensive and I originally refused to buy this case because of price but gf insisted... Noise: The case fans are a little loud and have a high-pitched "whine" to them. Much louder than my Azza Solano case with a similar number/size fan arrangement but I'm used to the sound by now.

Overall Review: I bought this case for my girlfriend's build and I was surprised to find that this case is top quality and worth the price. First time working with a Thermaltake product. Not a fan of the plastic "tool-less" drive bay design. I used screws with a magnetic screwdriver for my HDD and DVD installs. .

Pros: -Great Airflow -Many Large Fans -Several optional GPU fan ducts included for SLI cooling -GPU cooling fan is an internal 120mm fan capable of 5200rpm -Integrated Side Panel Fan connector (electrical connection made with a connector on the panel frame to the chassis) - Front Chassis Panel has what seems to be filter material in the slot covers -Screw holes for optional water bottle cage (bottle holder not included, but the instructions mention it)

Cons: -GPU cooling fan would be super loud, might think about a fan controller (rating for 5200rpm says its around 62 dB-A) -Other reviewer is right about the power/reset buttons, they're very easy to accidentally hit by mistake -Chassis feet could've been a little taller, if you put this chassis on long carpet the PSU intake port (on the bottom of the chassis) might get blocked

Overall Review: I'm thinking about getting a fan controller capable of handling the 3.4A that the GPU fan draws at peak speed. My motherboard can control some fans but each max out at 2A. Haven't installed the GPU Fan yet, but will post new review after I've seen it in action. Btw, the fan control knob you see pictured only controls the LED lit fans: one front HDD cage intake fan, Side Intake Fan, and the one provided top exhaust fan. The GPU Cooling options were focused more towards Triple SLI with the GTX470 /480 series cards with PCI-E power connections coming off the bottom of the cards. I'm gonna have to rig it up so the air flow is good for dual SLI gtx460 cards (with PCI-E power connectors coming out the back of the card).

Cons: cheap fans cheap leds already not working weird 1 of the 3 fans wont work unless the fan speed is turned up to a "minumum" speed" i have to pay shipping to return these cheap 2 cent fans i could get on 3b@y? no thanks !!!!

Overall Review: Dont think ill be using thermaltake unless the prices are equal to 3b@y no brand new prices because thermaltake name doesnt mean anything !!!

Pros: -Cosmetically, a very sharp looking case. -Case is spacious, allows for easy cable management and lots of air flow. -Love the fact that Thermaltake painted the interior of the case on this one as my last nVidia case was pretty ugly looking inside and had no room at all, so huge improvement. -5" inch drive bays are genuinely tool-less.

Cons: -The details are incorrect on this listing. The top exhaust fan (should have read the other reviews first) is a 170mm, not the 200 mm the video and the details state, so don't make the mistake I did and order a second 200 mm fan for it. Note: This is NOT Neweggs fault, they have it listed as the specs list, it is a misprinting on Thermaltakes side, unfortunately. And as another reviewer states, the "tool-less" icage for your 3.5 drives is NOT tool-less. You must unscrew it before you can remove it and install your hdds. -There is not a quick release option for the PCI slots, they're the old school screw in your card type, which is fine, but somewhat difficult due to the angles (I have tiny hands and tiny tools, still had a difficult time with it), so be prepared there. -Finally. not really a con, actually attests to the spaciousness of this case, but I have a sabertooth mobo with i7 chip and cooler master v8 CPU cooler, which is why I needed to up my case from the previous nVidia model (I love the black and green). If you are coming from a case that previously housed your psu on top, and your mobo 8 pin was also on top, GET THE 8-PIN EXTENSION cable. This is a MUST (at least for me) as the 8-pin lead from my current psu is about 6 inches too short to make it comfortably around the CPU cooler. (4 inches too short to make it at all, comfortable or not.)

Overall Review: All in all a great case, even if slightly mis-represented by Thermaltake in regards to the fan sizes and "tool-less" options.