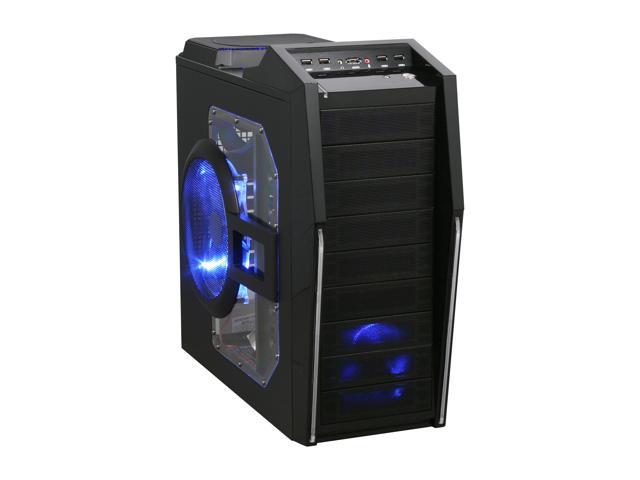 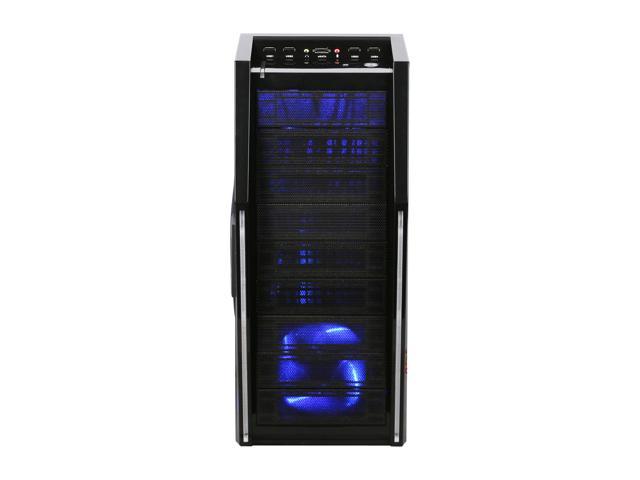 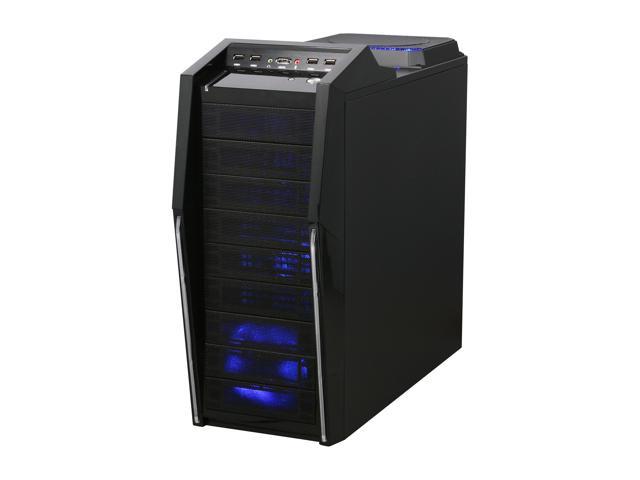 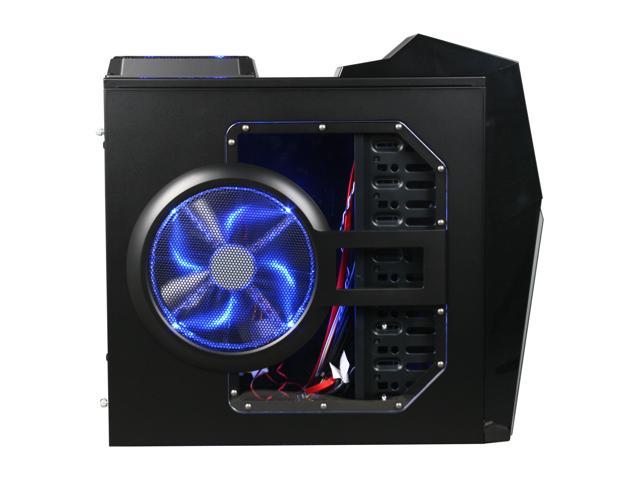 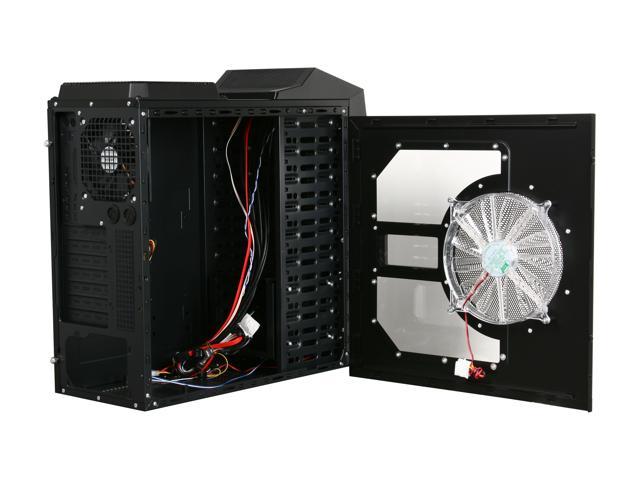 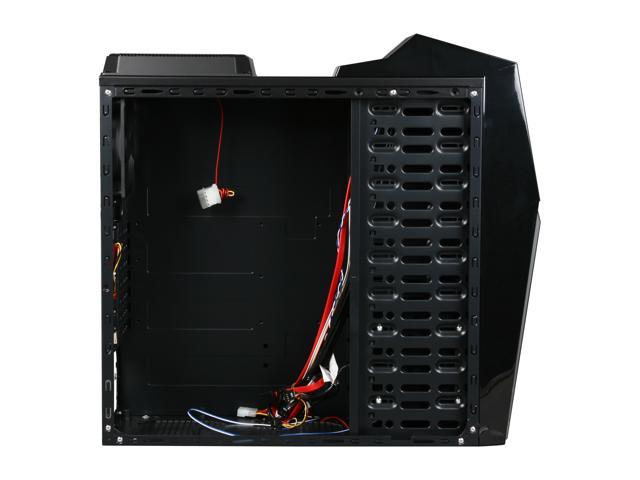 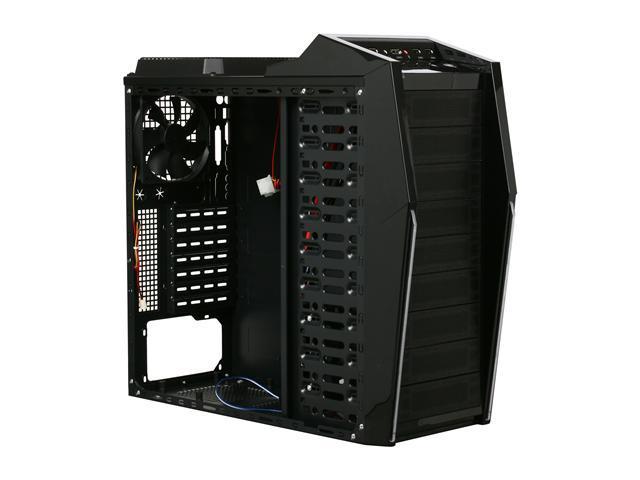 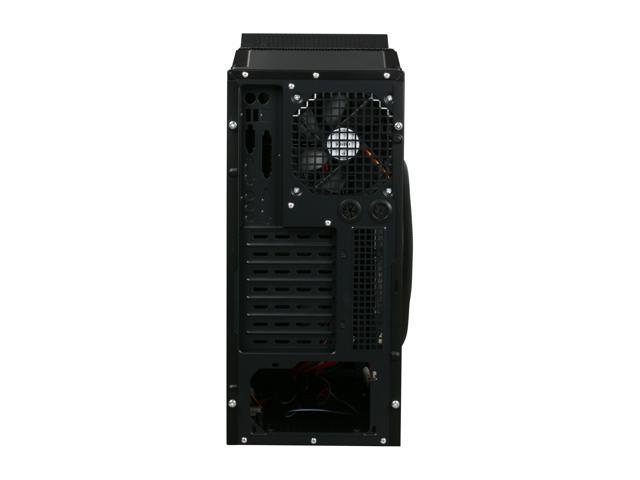 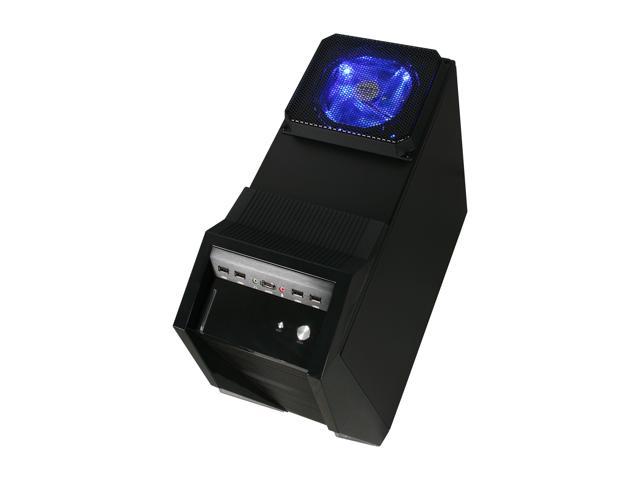 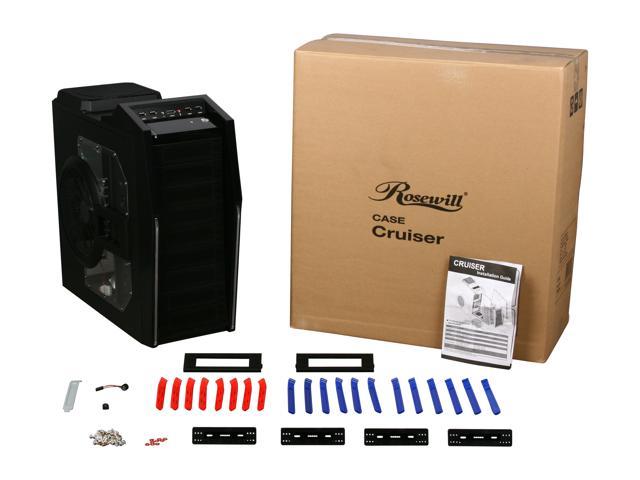 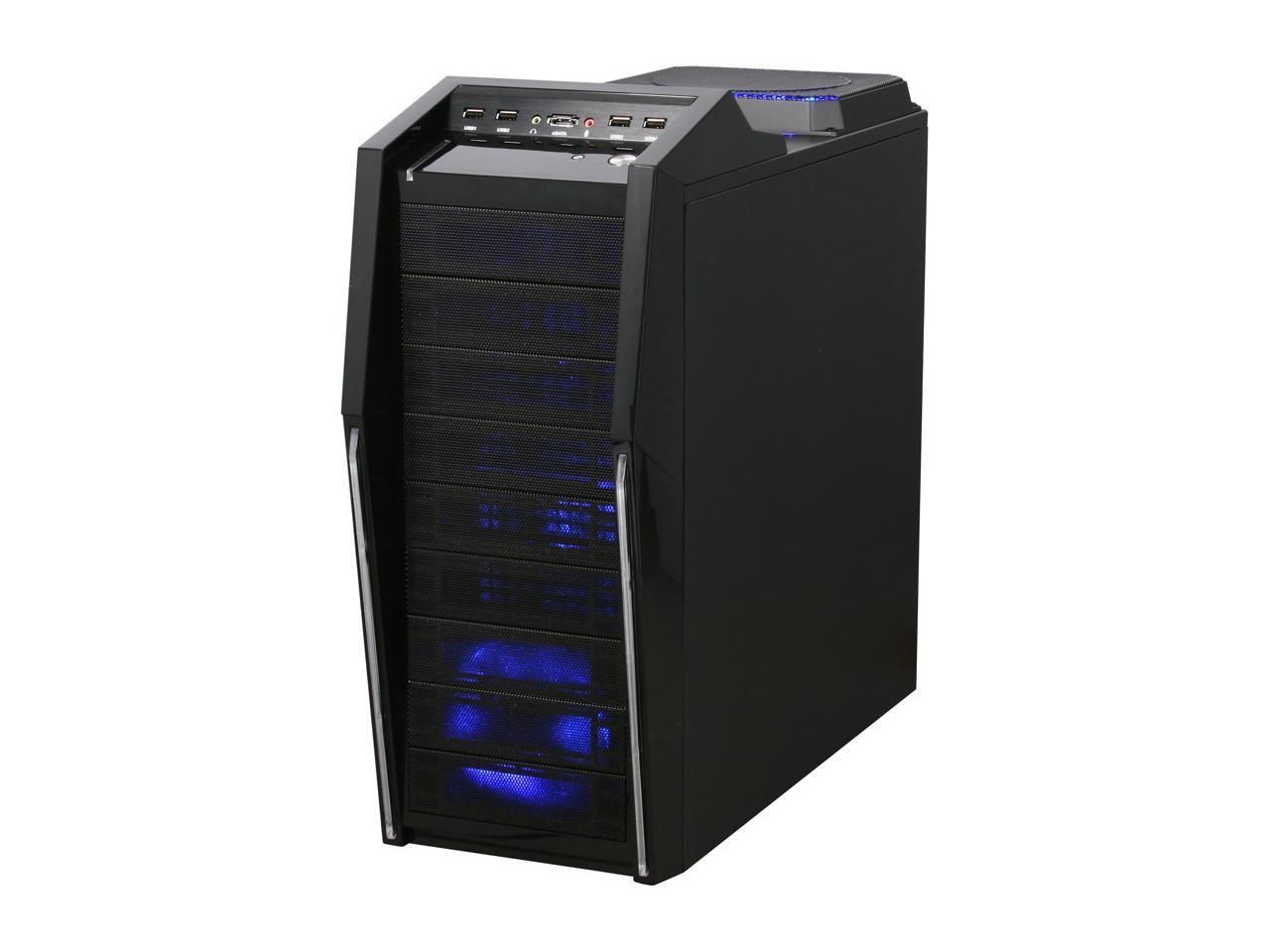 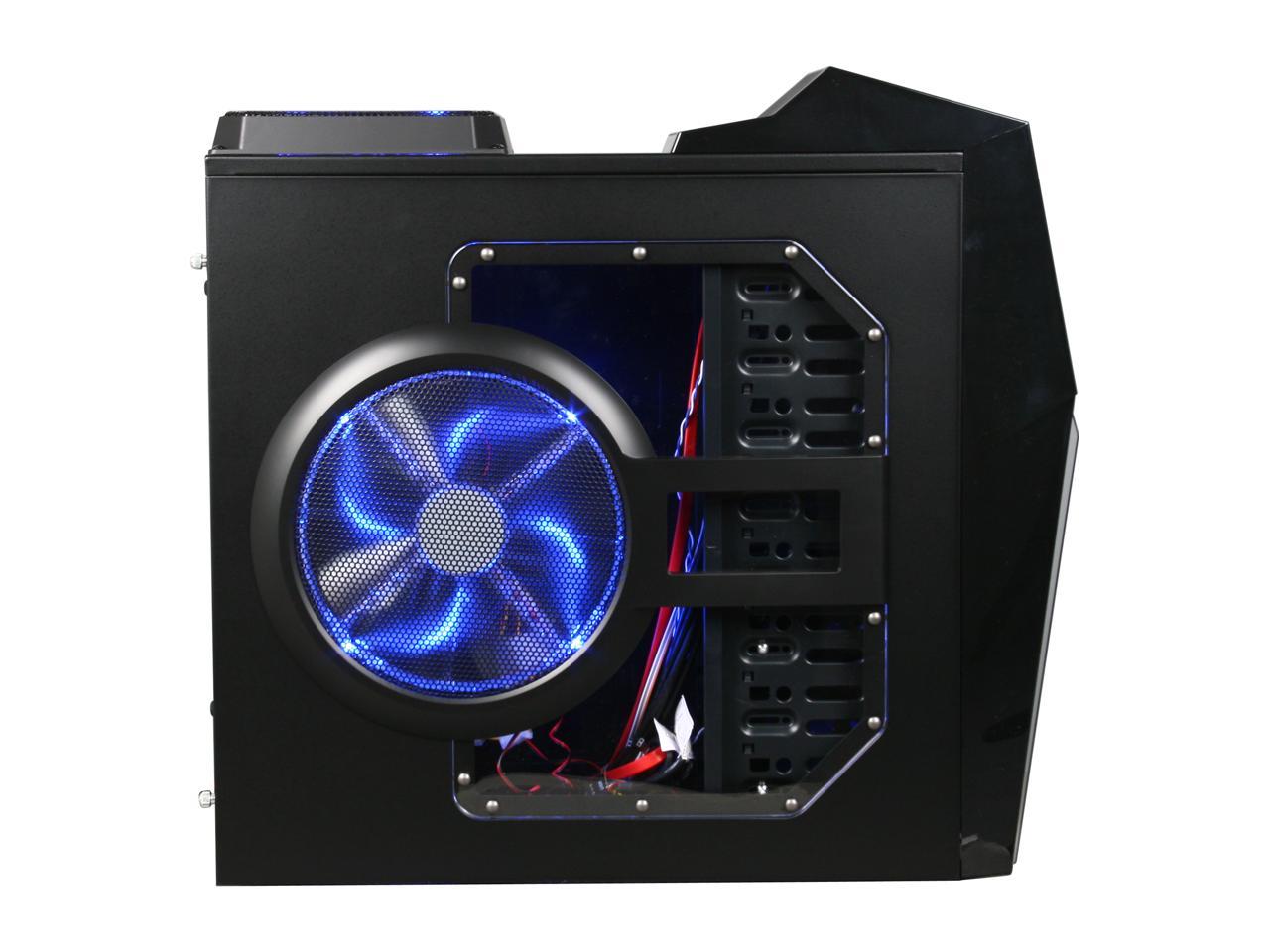 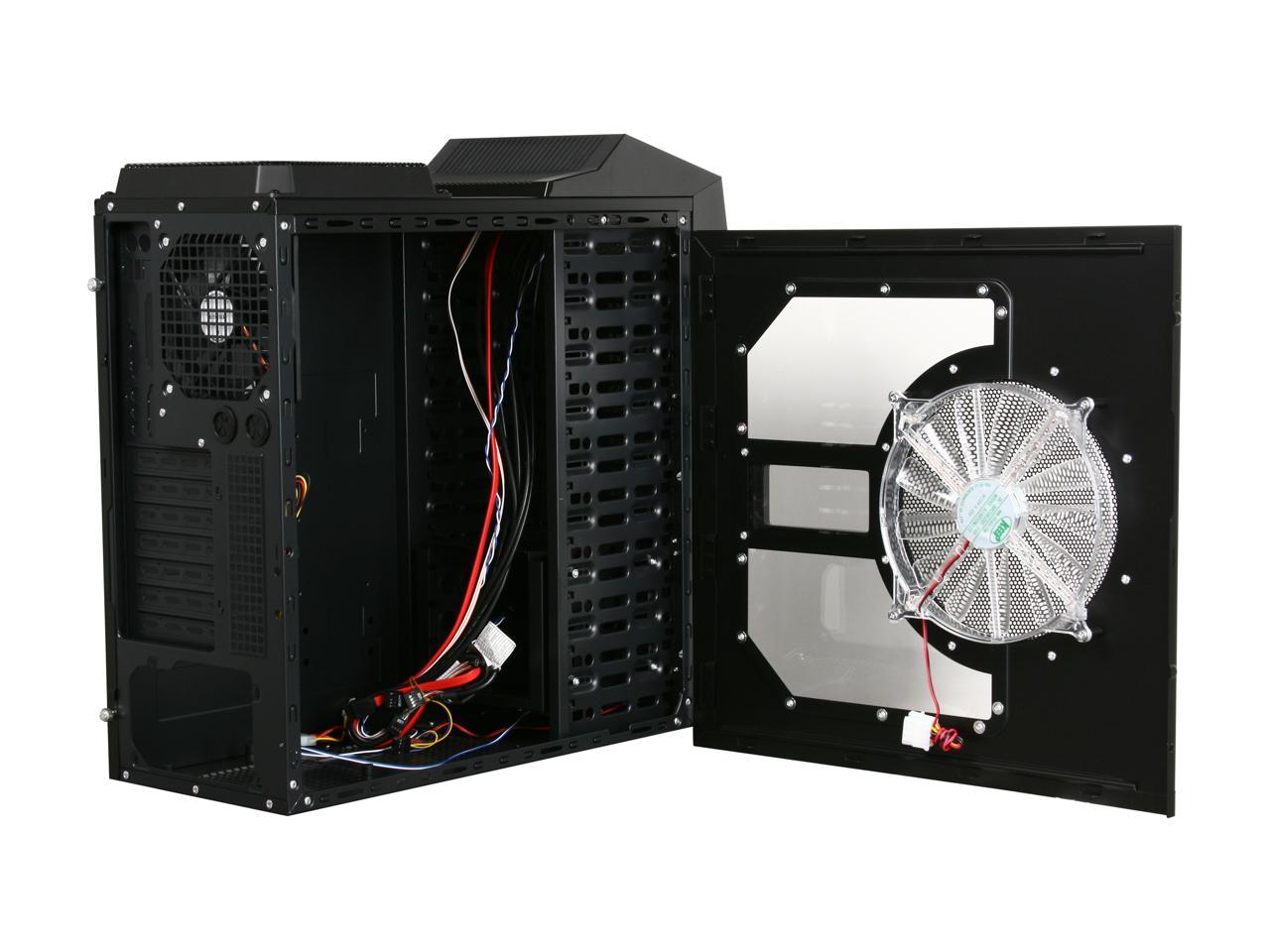 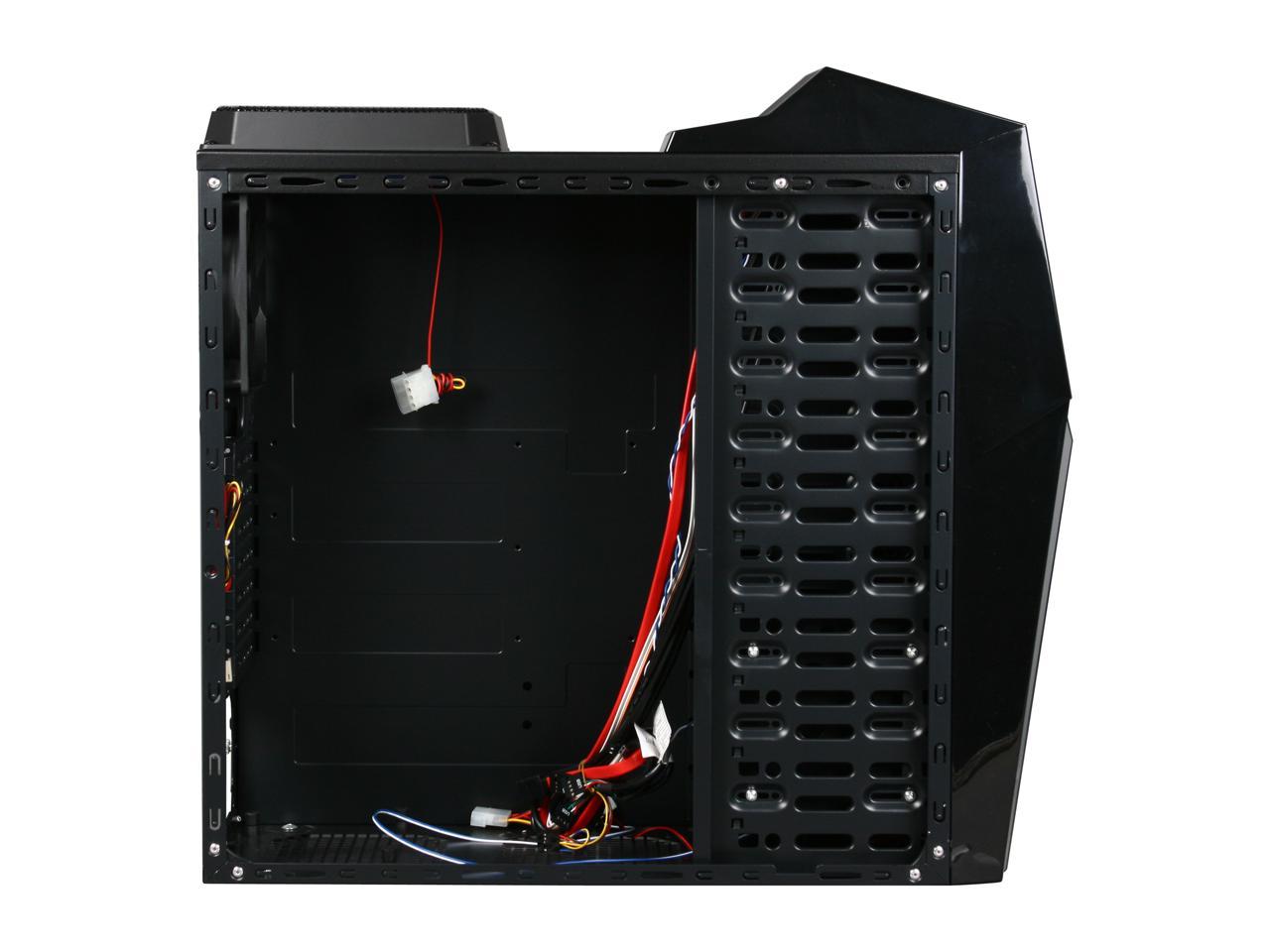 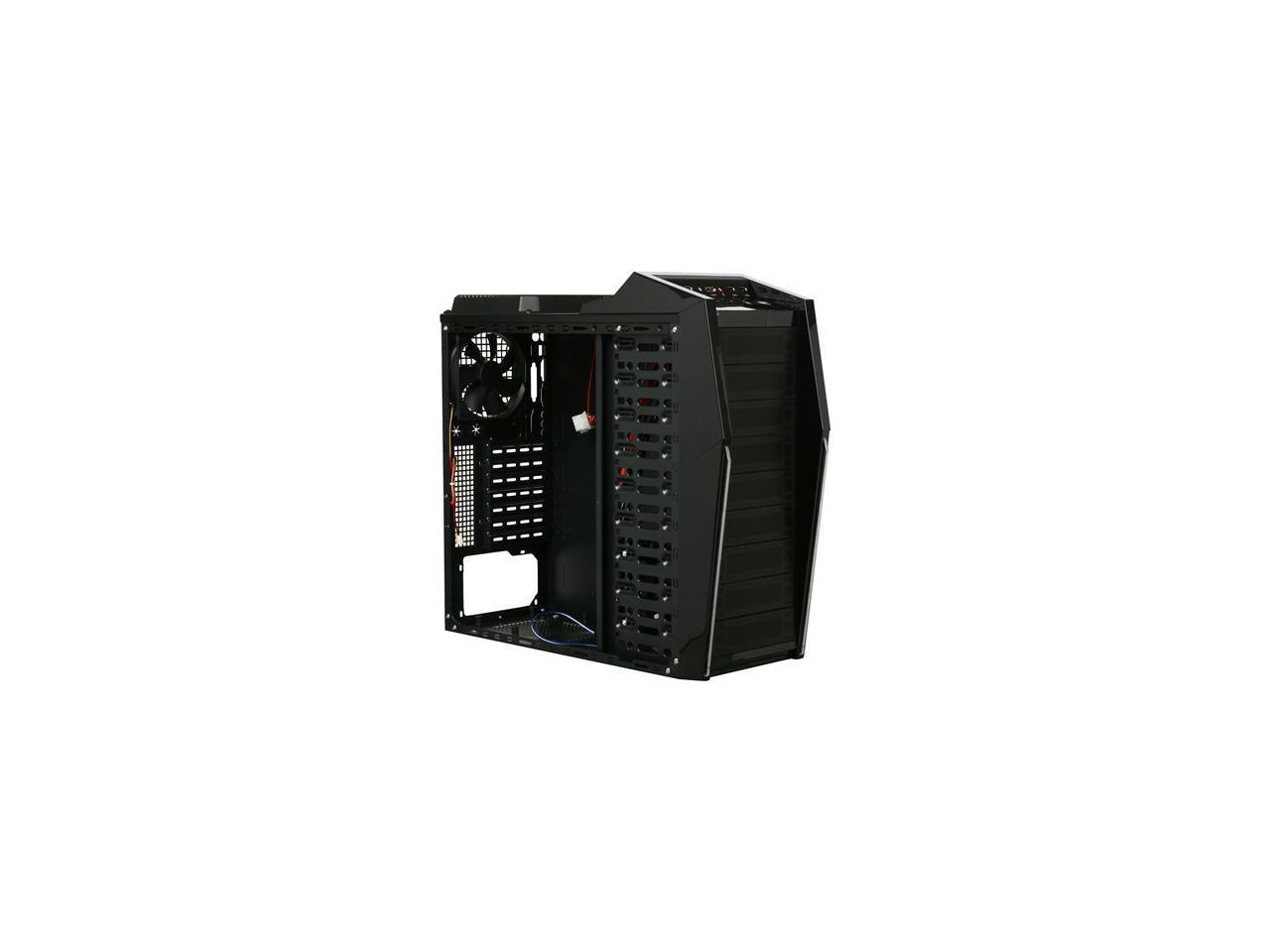 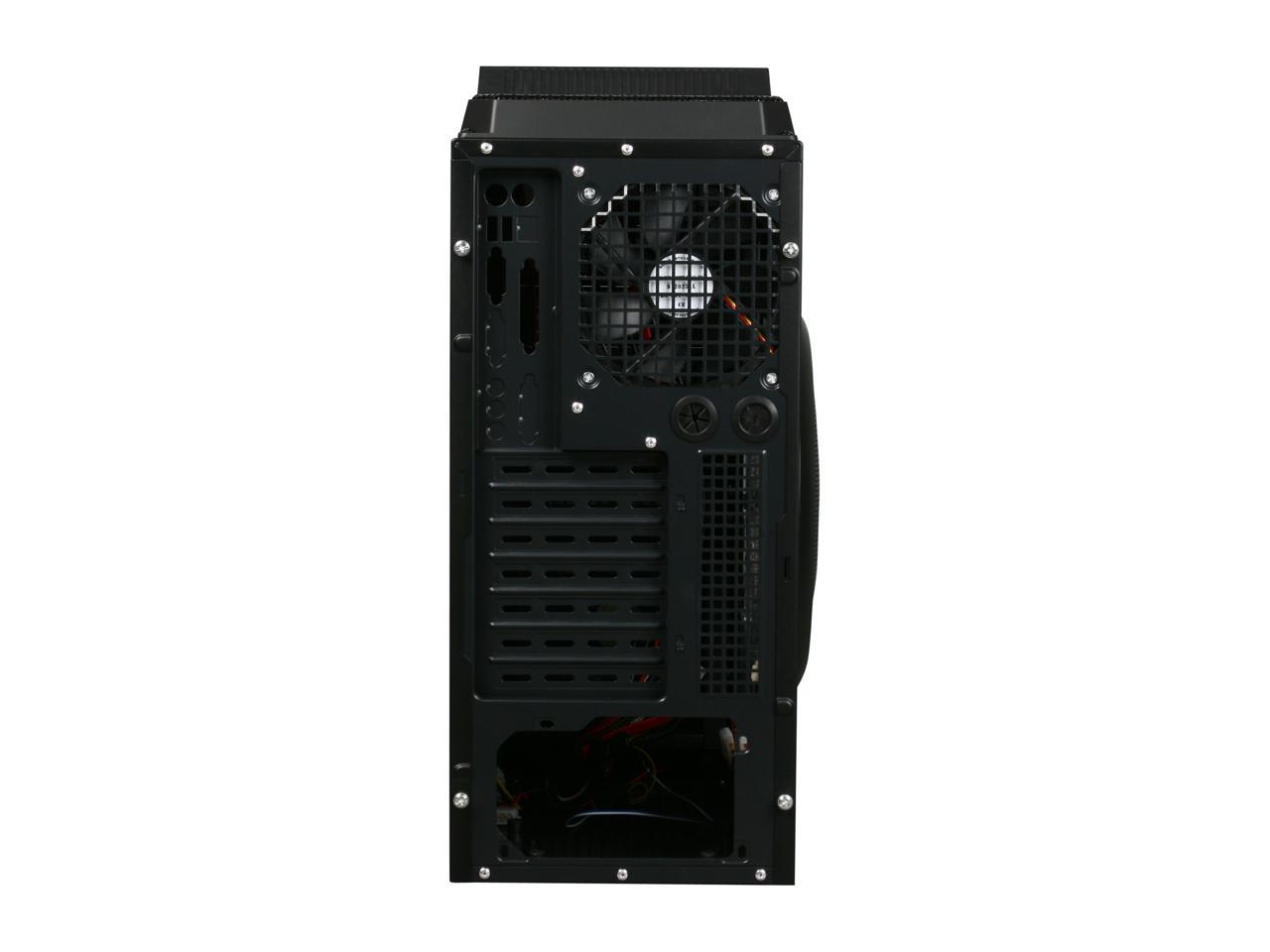 (222) Write a Review
OUT OF STOCK.
Overview
Specs
Reviews
Build the ultimate gaming rig with the Cruiser by Rosewill. This mid tower case can accommodate Micro ATX and ATX motherboards. You’ll have more than enough room for storage with four internal 3.5-inch bays. You’ll also enjoy installing several front panel peripherals with five 5.25-inch drive bays. As an added bonus, fan filters keep the dust out. For card and CPU cooling, the side panel houses a blue LED 190mm intake fan and the blue LED 120mm fan on the front panel cools HDDs. The top panel blue LED exhaust fans vent heat to minimize system slowdown. It also features a 120mm fan on the rear for even more air flow.

Learn more about the Rosewill Cruiser

Pros: This case is amazing. I swapped up from an older case that had (a lot) fewer fans. While I was accustomed to reaching over 60C with the old case while I was playing games, this case I've never even seen get close. What makes it even better is that all those fans are not near as loud as you would think they are. Furthermore, the blue LEDs provide a nice glow to any room (especially when coupled with a Razor Lycosa).

Cons: It's easy to get smudges on, kind of. The manual isn't very helpful (I personally had trouble figuring out the plastic things they use for drives instead of screws). It is a bit bulky, but I'm not exactly sure that really matters...

Overall Review: It looks plain nice. It's a solid buy, and it does a fine job.

Pros: -Plenty of room for upgrades -Four massive fans -Pumps out cold air even with a Pentium 4 HT inside it -Lights look amazing in the dark -Works as a decent A/C unit when idling -Plenty of extra hardware after installing everything

Cons: -I thought I was going to break the front panel of the case when I was pulling it out to put in my optical drives, but nothing to worry about. -Had to hard-mod the motherboard rack to secure my CPU heatsink's retention bracket. -Horrible documentation See Other Thoughts for explanations

Overall Review: I'm not marking this product down for the cons, simply because the 1st and 3rd are pretty common with newer cases, and it was really just because I was overcautious about it. As for the second con, that's more Dell's fault than anybody else's for using a retention bracket that needs to be secured into the motherboard rack to keep the heatsink in place. Regardless, the installation went smoothly and it's definitely a case I'd pick up again, especially if they keep the combo with the 750W Rosewill Modular PSU.

Pros: AIR! - Comes with plenty of fans. Pricing fans and cases individuallly were more expensive than this case alone. I got it on a shell shocker deal, for a steal. Some rather large fans are included. Thanks newegg. Light, yet sturdy case. Plenty of room to work around in, bottom mount PSU. tool-less design worked easily enough, building in this case was ezmode. Also, with everything pumping, the fans are fairly silent.. I could barely hear them when i turned it on.. it scared me a little at first. oh I also like the placement of the power/reset buttons and usb header

Cons: Blue, why always blue!? why not green? or orange!? or rainbo... nevermind. Im just tired of blue. Not much in the way of cable management, but I didnt need it as the system placed in it was minimal in components. A few sharp edges, people with fatty nerd hands like me beware since there are a few corners aiming to get you. Besides the blue, its also cosmetically... "interesting".. but I bought it for functionality not for the pretty, although that large side window fan is rather attractive despite its blueness. oh, and the dummy i/o panel for the motherboard was difficult to remove, and it turned into a bloody fiasco involving tin snips and nerd rage.

Overall Review: My wife was using an old, beaten and abused antec case i bought for myself oh... 15? years ago or so. Her Phenom 1050 was cooking in that box, it only had 2 80mm fans. Using this case dropped her CPU temp @ idle up to 20c, and during heavy load a difference of almost 30c. Even dropped the temperature in my nerd room by almost 7 degrees during the day. Keep in mind im in florida, and it gets kinda hot here. If you need a cheap decent case, and airflow is a priority, I would definately reccomend this to someone. I officially no longer consider rosewill a "knockoff" brand whatsoever as I have purchased a plethora of their items, because of a limited budget. Nothing has failed me yet. Newegg should also change their name to "Shipping Masters" as they are the fastest out there. More often than not 3 day shipping items show up in 2 days. /highfive.. p.s. Help me. Im addicted to newegg.

Pros: So I just got this with a AMD 6 Core 1090T. Case is wonderful. I saw someones review about the drives being hard to install. The directions are so clear its unreal so i dont see there should be a problem with any skill level. And also seeing the pictures of this case does not do it justice.

Overall Review: When you build a custom PC you should expect complications. Hate seeing someone rant over having to mod 1 tiny thing. Its custom, get used to it.

Pros: The case is nice looking and lots of fans for great cooling. See through side panel with huge side fan. Sweet blue light up stripes that remind me of the Tron movies. Lots of blue internal and fan lighting. The whole front panel are sectioned with dust filters for lots of aeration. Fairly roomy for those large video cards. (EVGA GTS 250) Ive owned it for 7 months and I am happy with it.

Cons: Lots of plastic parts that can get damaged in shipping or other. Hard to reuse the plastic cd/dvd mounting brackets. They wear out. Use them twice and maybe three times before they lose their grip.

Overall Review: I damaged the power button electronic board and I emailed rosewill tech support to ask where to get a replacement part. They promptly emailed me to let me know they would send me a new part for free! Thanks Rosewill! I will shop with you again.

Pros: This is an excellent buy for $80. Well made and painted inside. A very nice screw-less drive mounting system. Very convenient to have the USB ports and buttons on the top of the case.

Overall Review: I have bought many cases over the years and this is NOT a $20 quality case.

Pros: Really like the design of the case's front. Lots of front USB connectors and an eSATA port. Lots of fans with great ventilation that is very quiet - transplanted motherboard actually ran cooler in this case! Blue lighting is not as bright as some people have stated; perhaps there's unit-to-unit or production-run variation. You can easily leave the front vertical blue accent lights unplugged. Front intake fan area has dust filters.

Cons: Where do I start? The built-in rear I/O connector/RF shield was hard to remove and deformed the sheet metal in the process. I had to straighten the rear panel back out. The I/O shield cut-out is a bit too small and my motherboard's I/O shield never did quite "click-in" to place properly. No motherboard tray or under-CPU cutout for heavy heatsink supports - you have to install the CPU and cooler BEFORE you install the motherboard into the case. Paint scratches off the chassis easily. NO cable management to speak of. Installing Corsair H50 Hydro Cooler for the CPU required remounting the top rear exhaust fan to the outside of the chassis, which ruined some of the visual aesthetics. The big window on the side of the case lets you see all the cable clutter inside. All the chassis fan Molex connectors are as cheap as possible and require excessive care to plug up without breaking the internal pins. One day I'm going to disassemble the chassis and solder all the fan l

Overall Review: I suggest that you physically install the HDs, DVD-RWs and CD-RWs BEFORE you drop in the motherboard, THEN plug up the cabling. Get a MODULAR POWER SUPPLY and attach only the leads you NEED! Buy a bag of cable ties and snippers BEFORE you start this project. Set aside a lot of time to do the install.

Cons: -fans leave some power to be desired -I can foresee running out of hard drive bays (only 4) -cable management is a nightmare, especially with 6 large cables coming from the front panel. -non-removable motherboard tray -Manual? What manual? -no dust filter for the 190 fan or the psu! -The 190 fan is in exactly the wrong place for the window.

Overall Review: all around a good case. some of the pieces are tacked in with welds, but its nothing a twist and wiggle can't break. The IO panel is tricky: take a hammer and screwdriver to the lone weld on one side of the plate, then you can wiggle and break the other 2. There's a small space under the HD bays where you can stuff some the cables you don't need. You could probably tuck away 1/2 the cables of a non-modular psu. I opted for 1" black flex tubing to keep the cables under control and out of sight. The 190 fan also has 180 mounts, and you can add another 120 fan on the bottom if you need better cooling. Get this case!