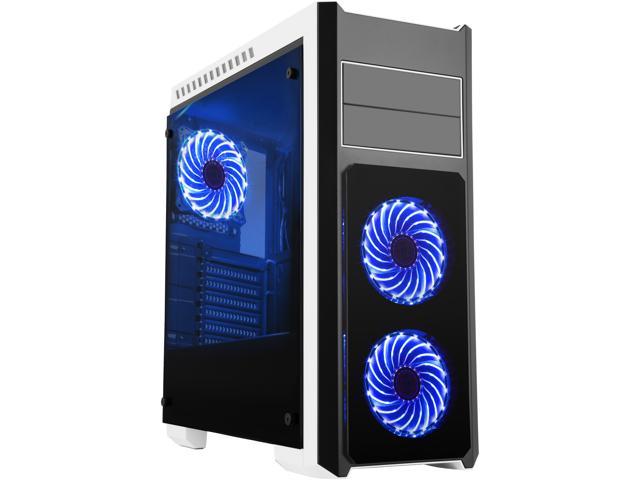 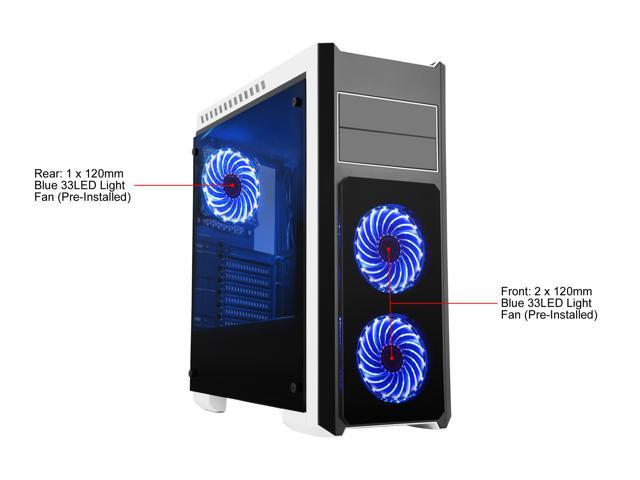 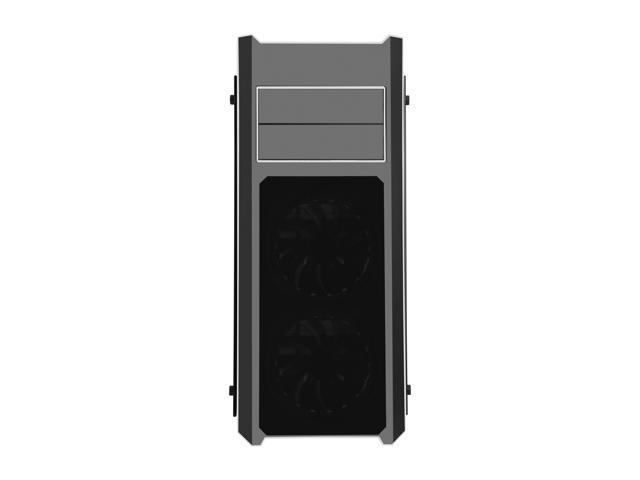 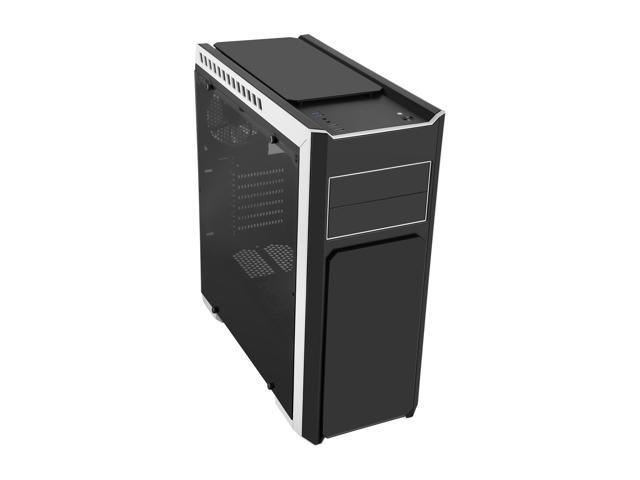 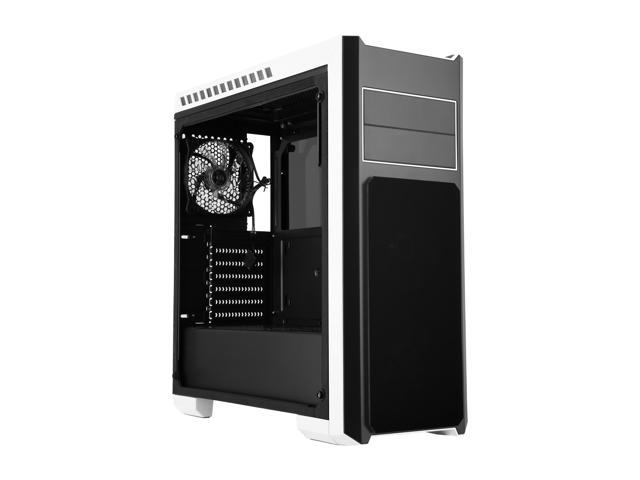 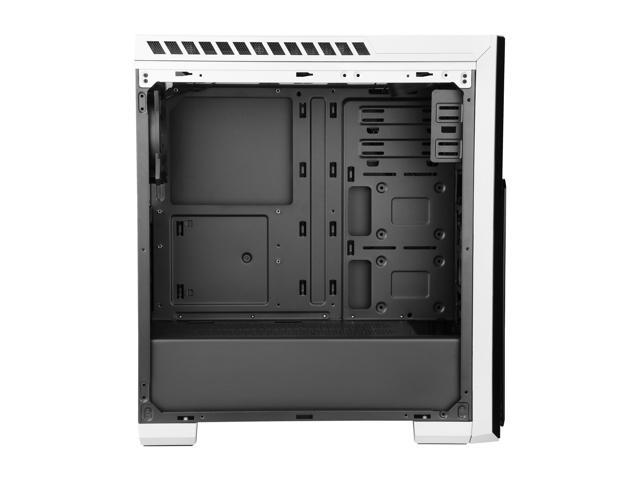 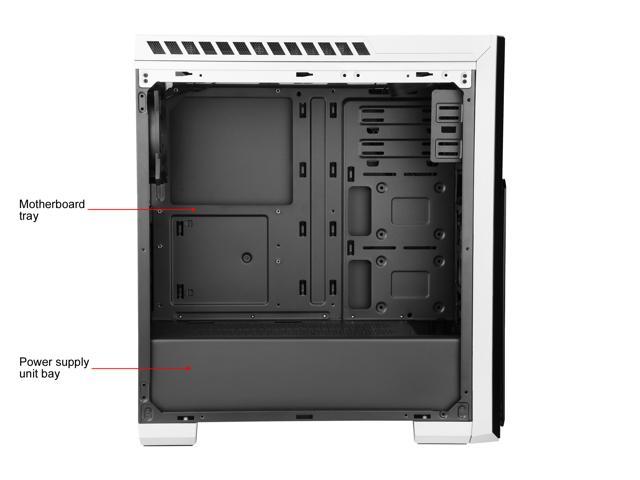 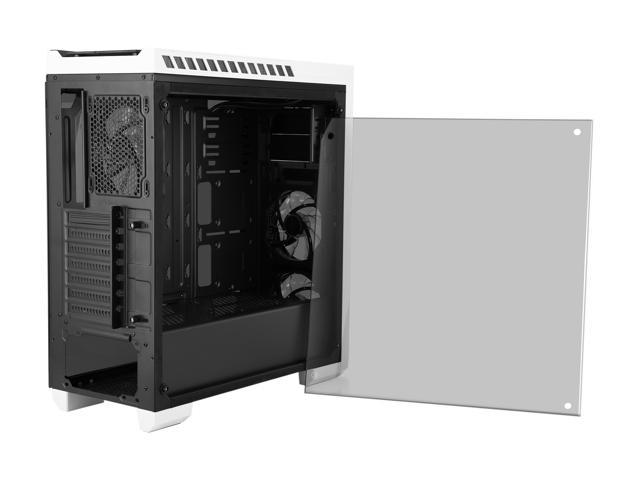 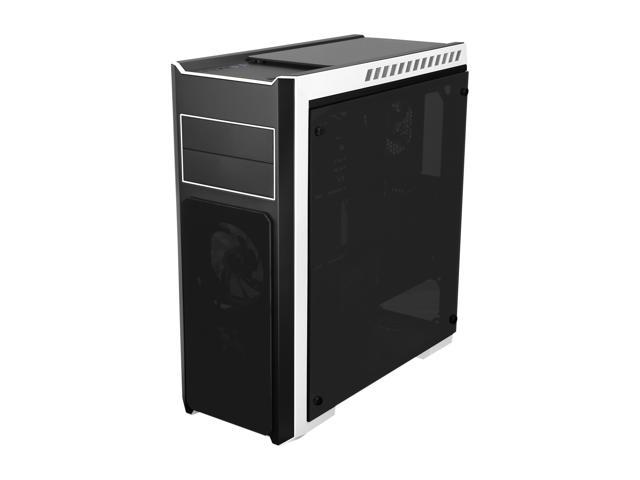 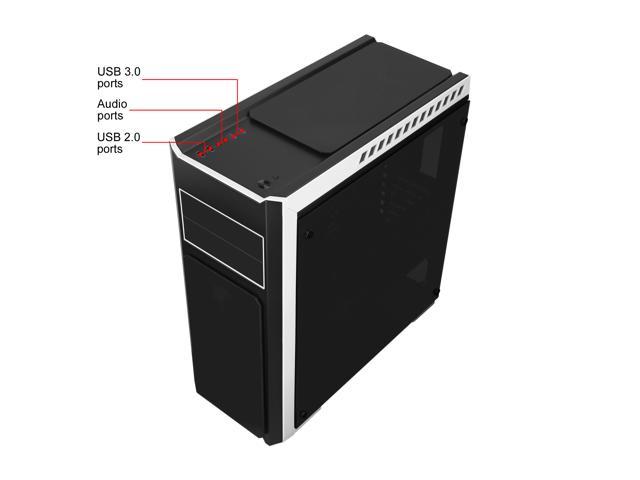 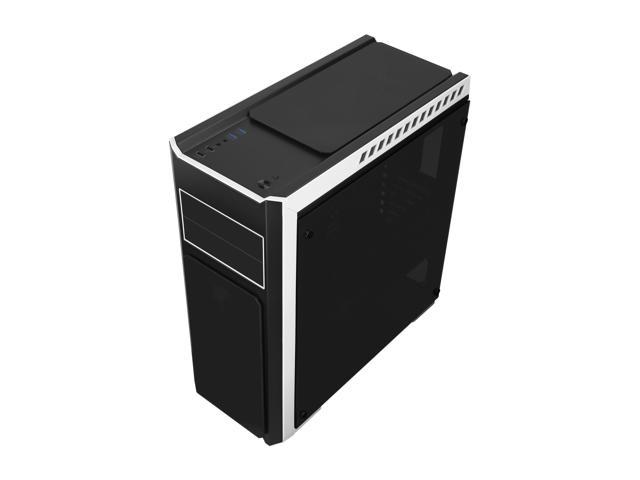 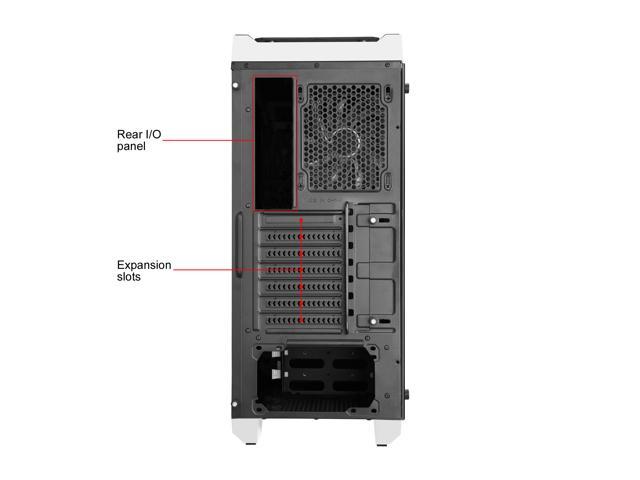 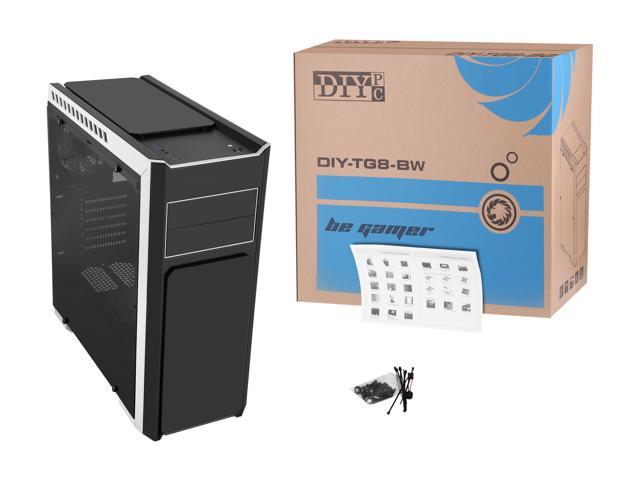 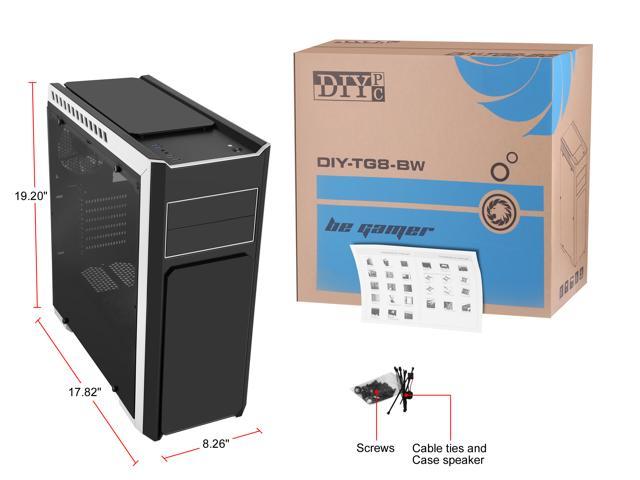 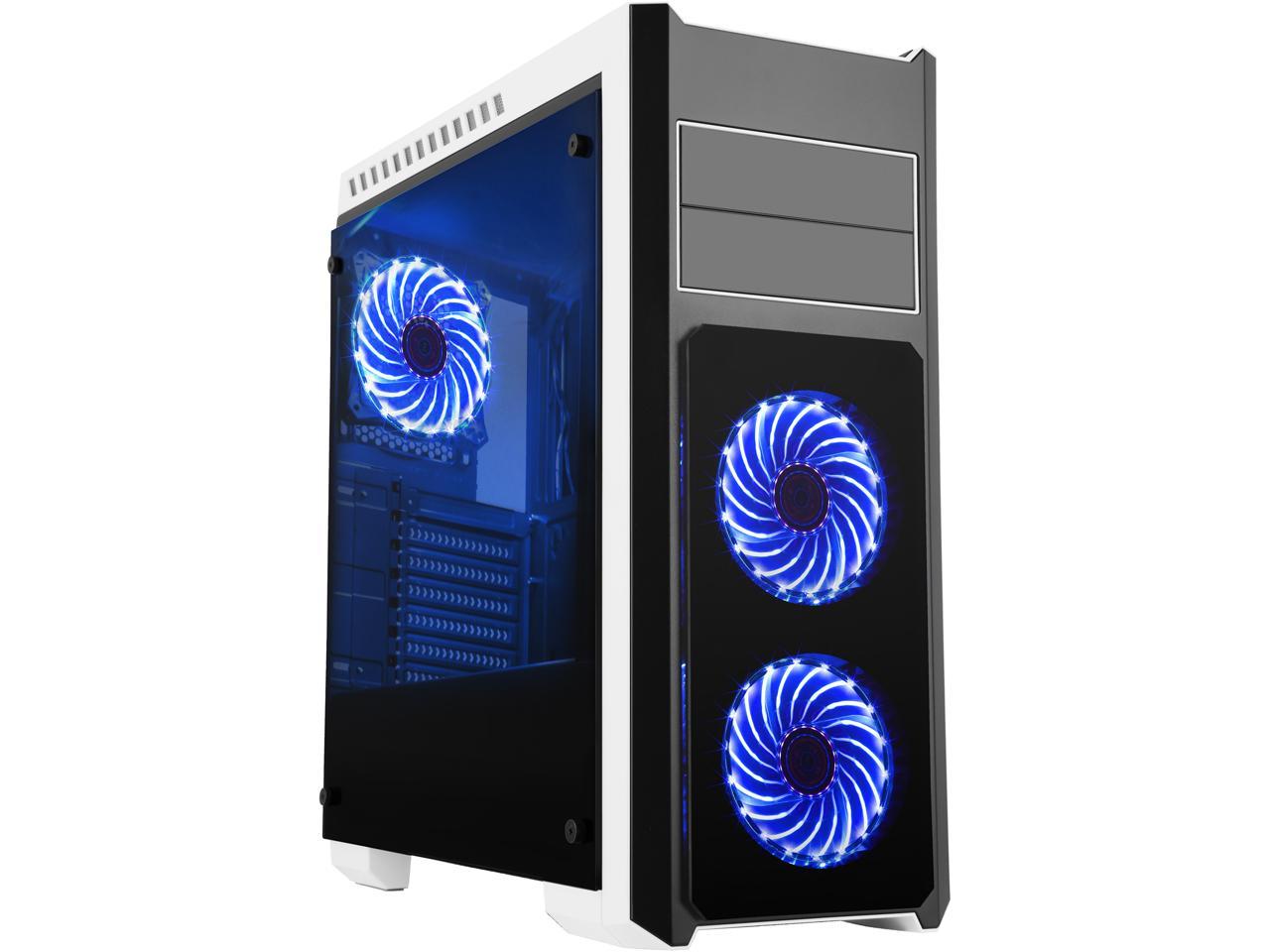 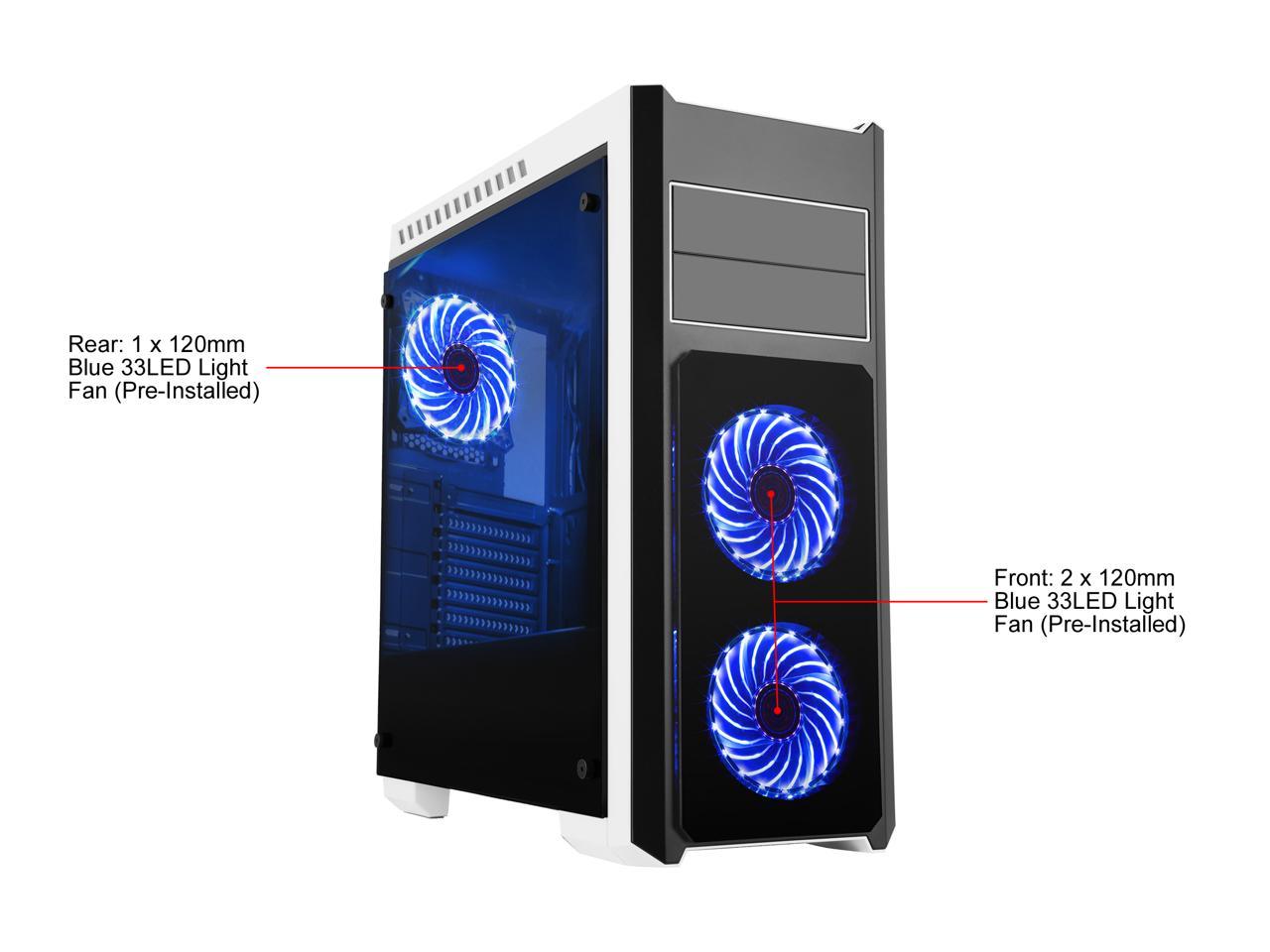 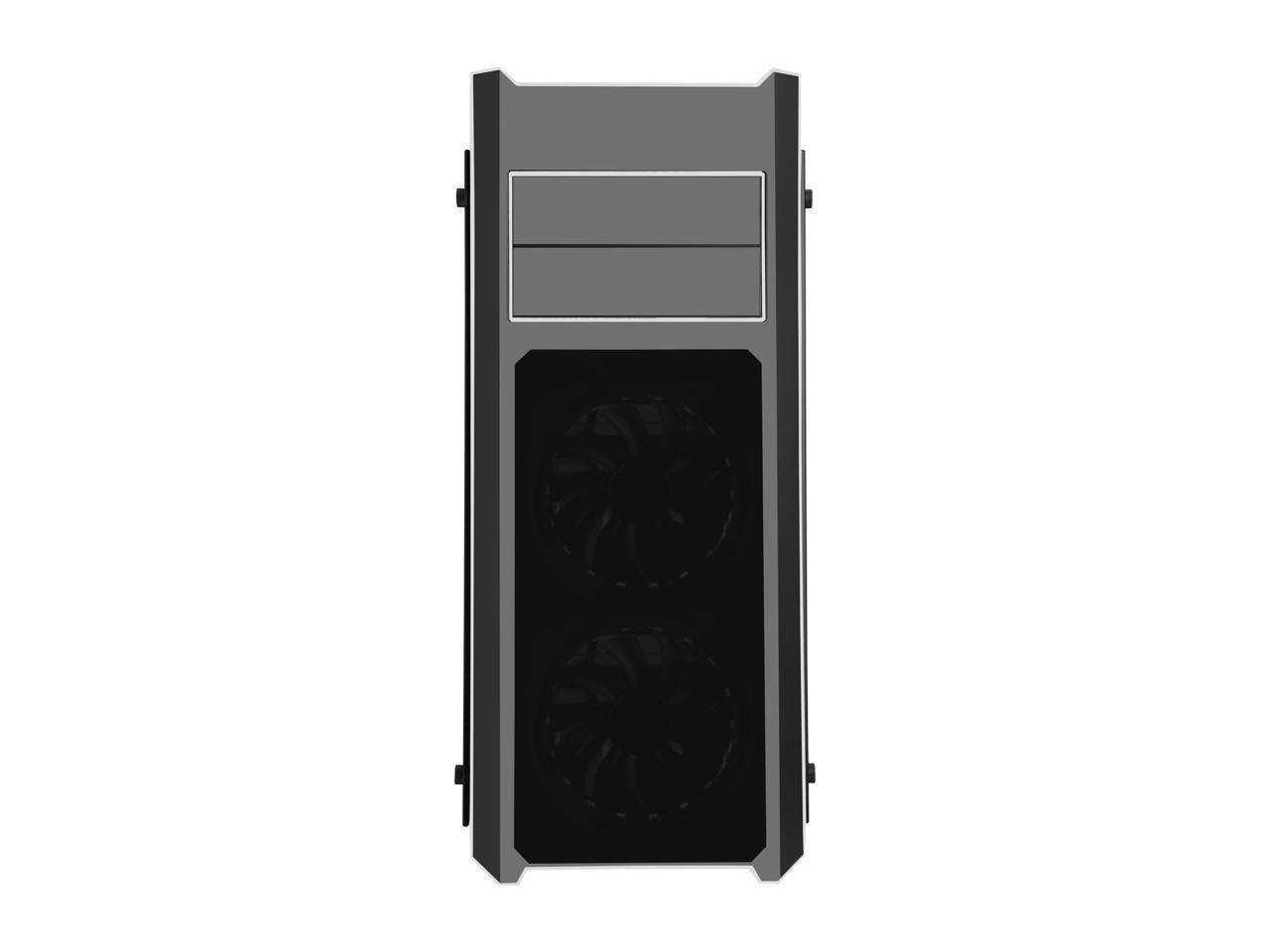 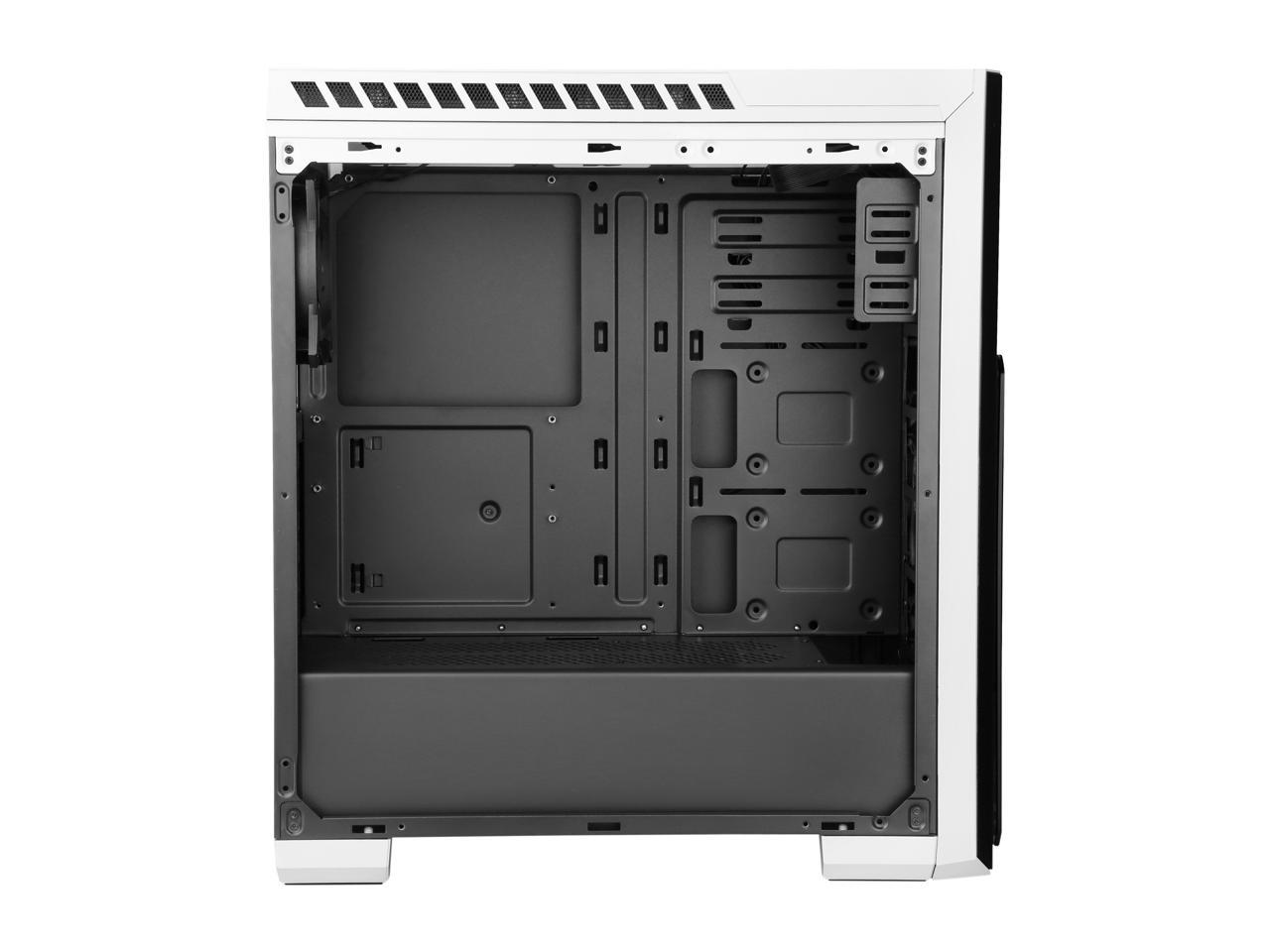 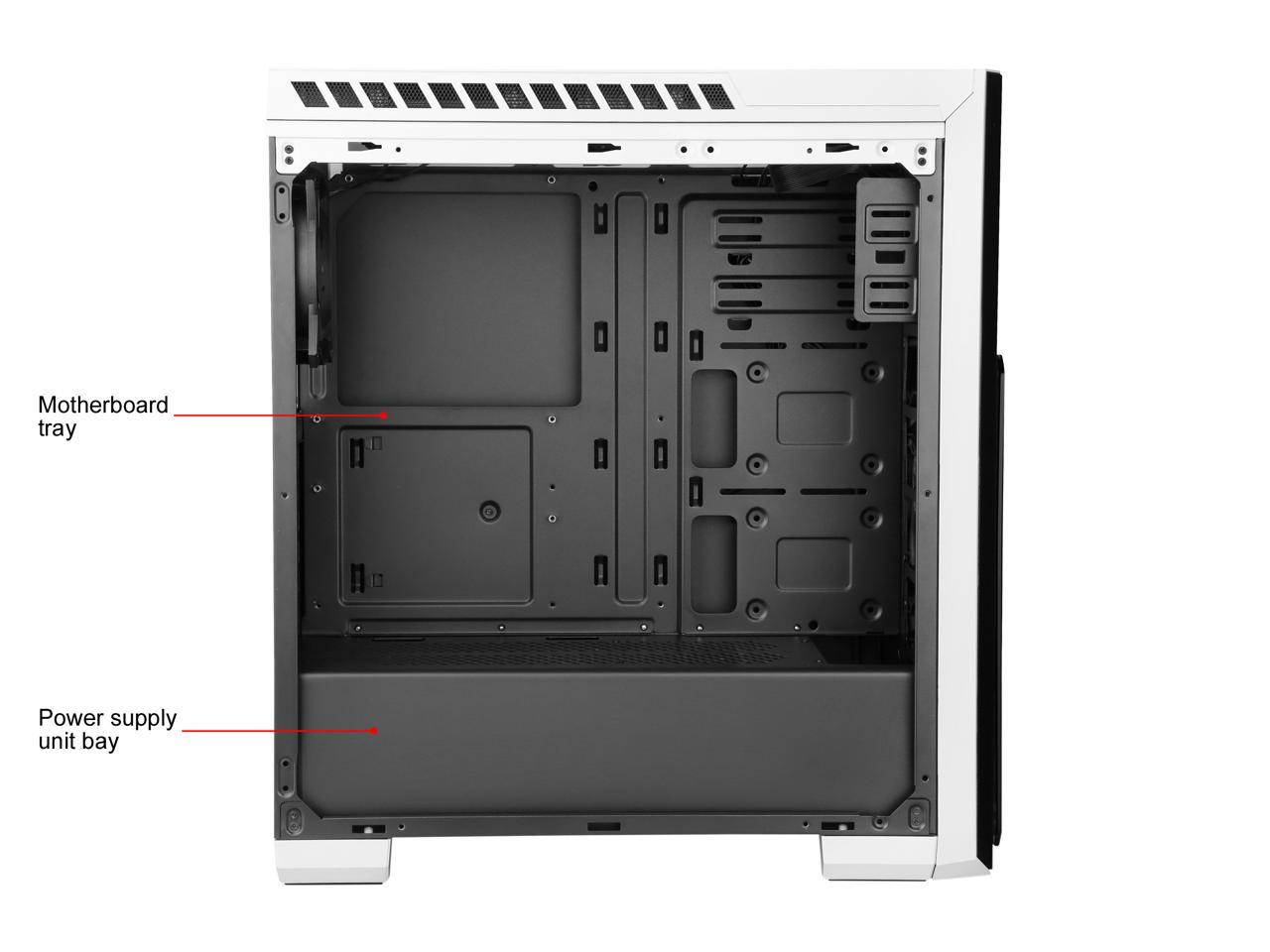 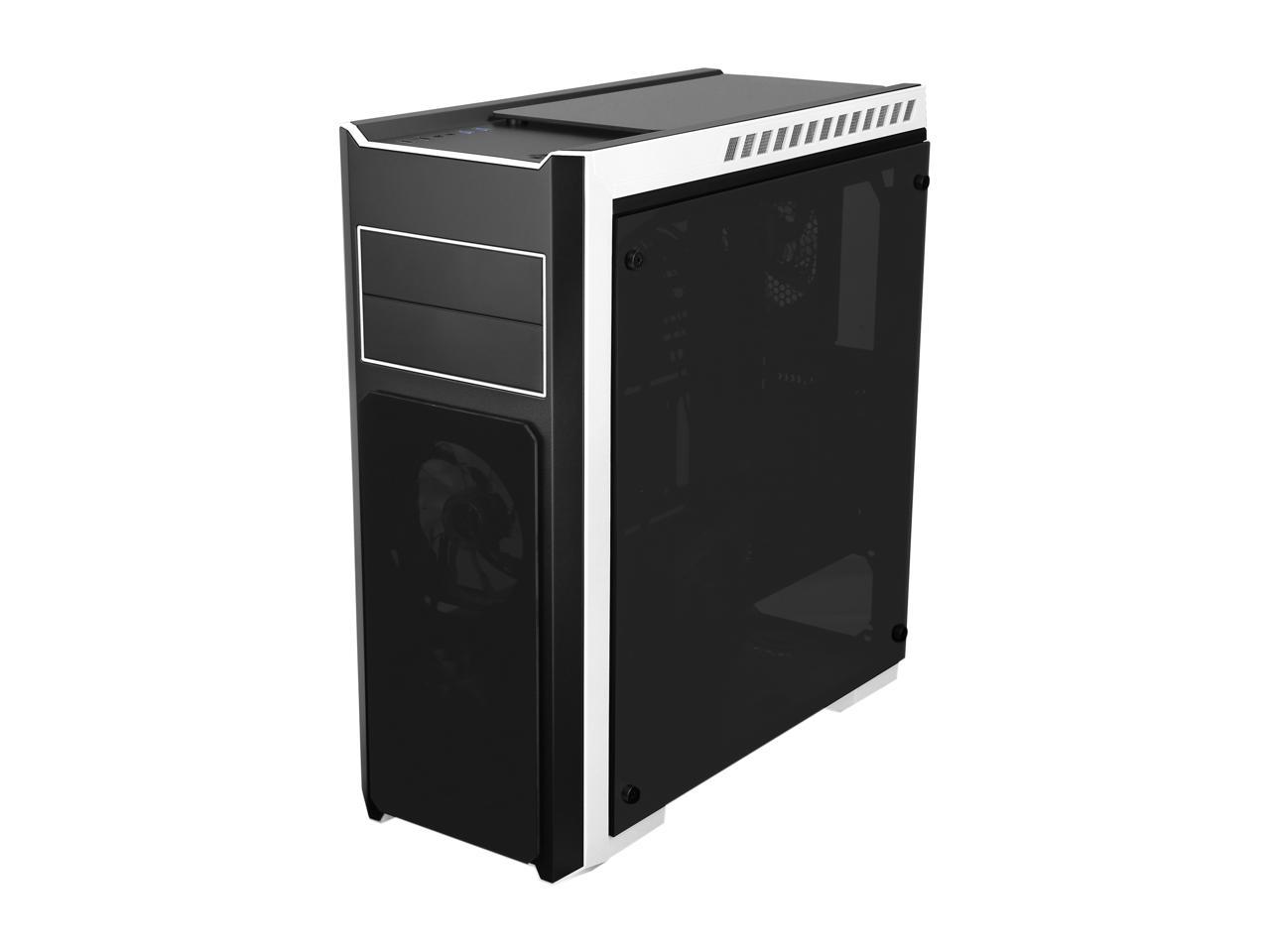 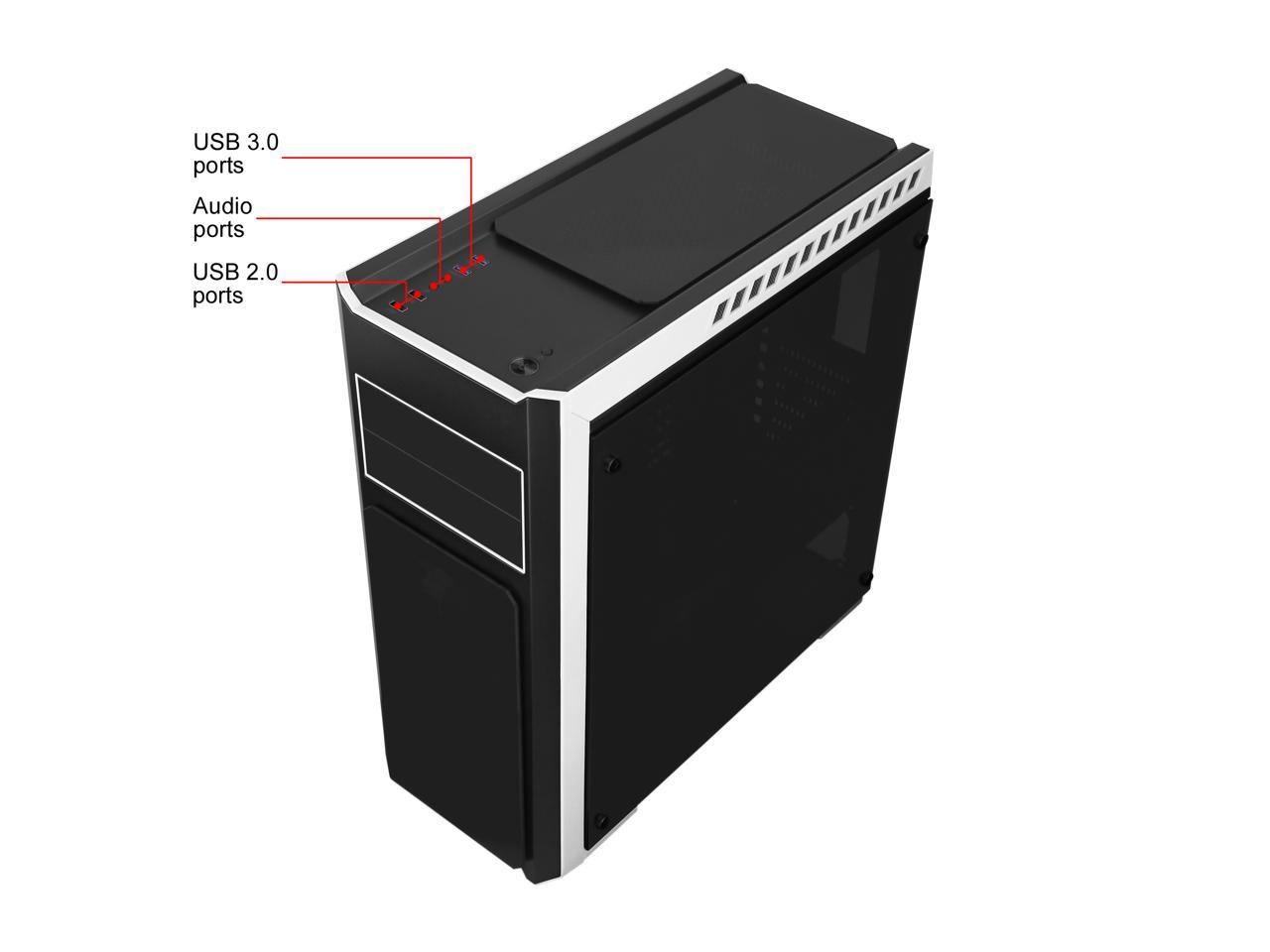 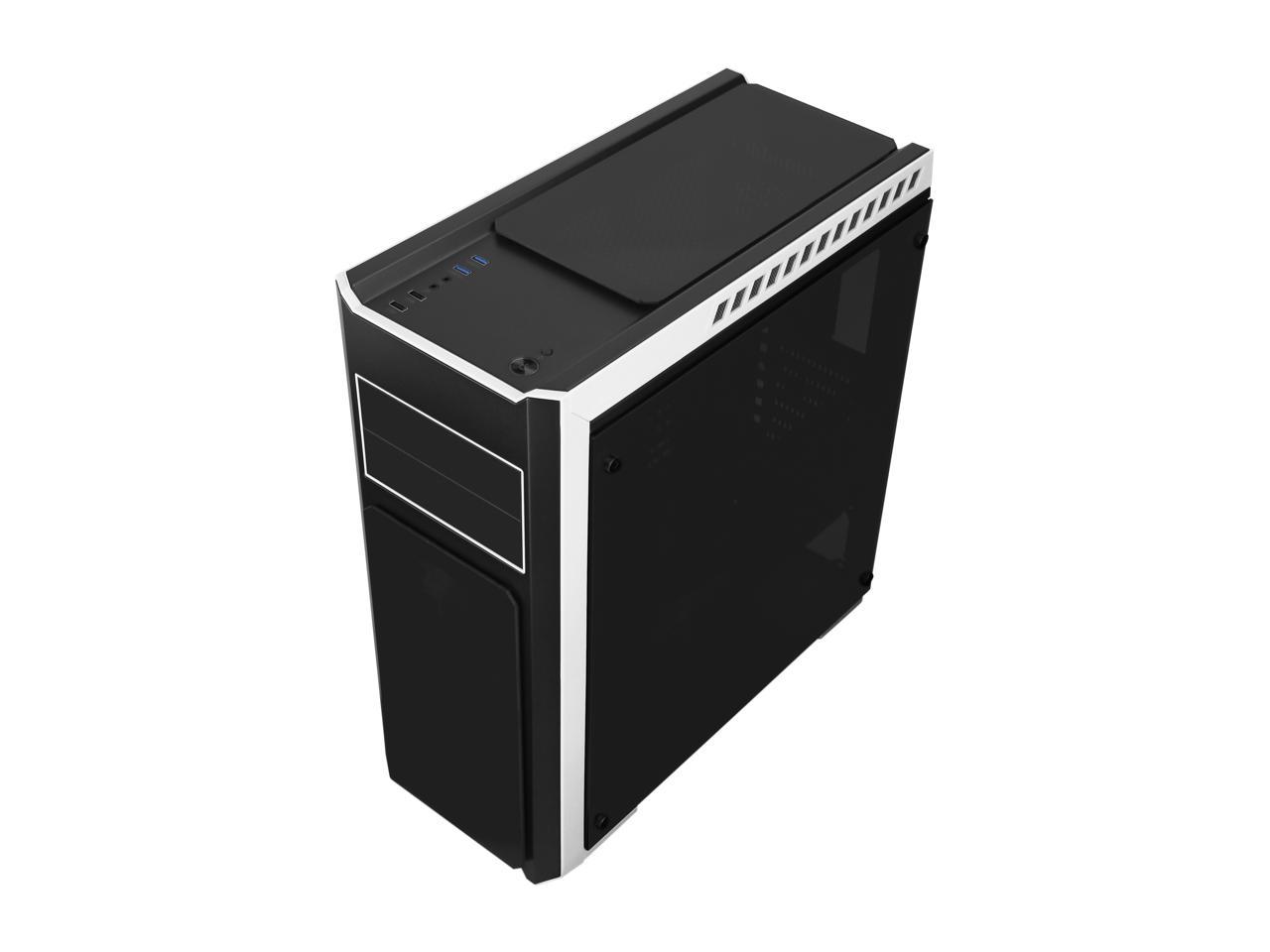 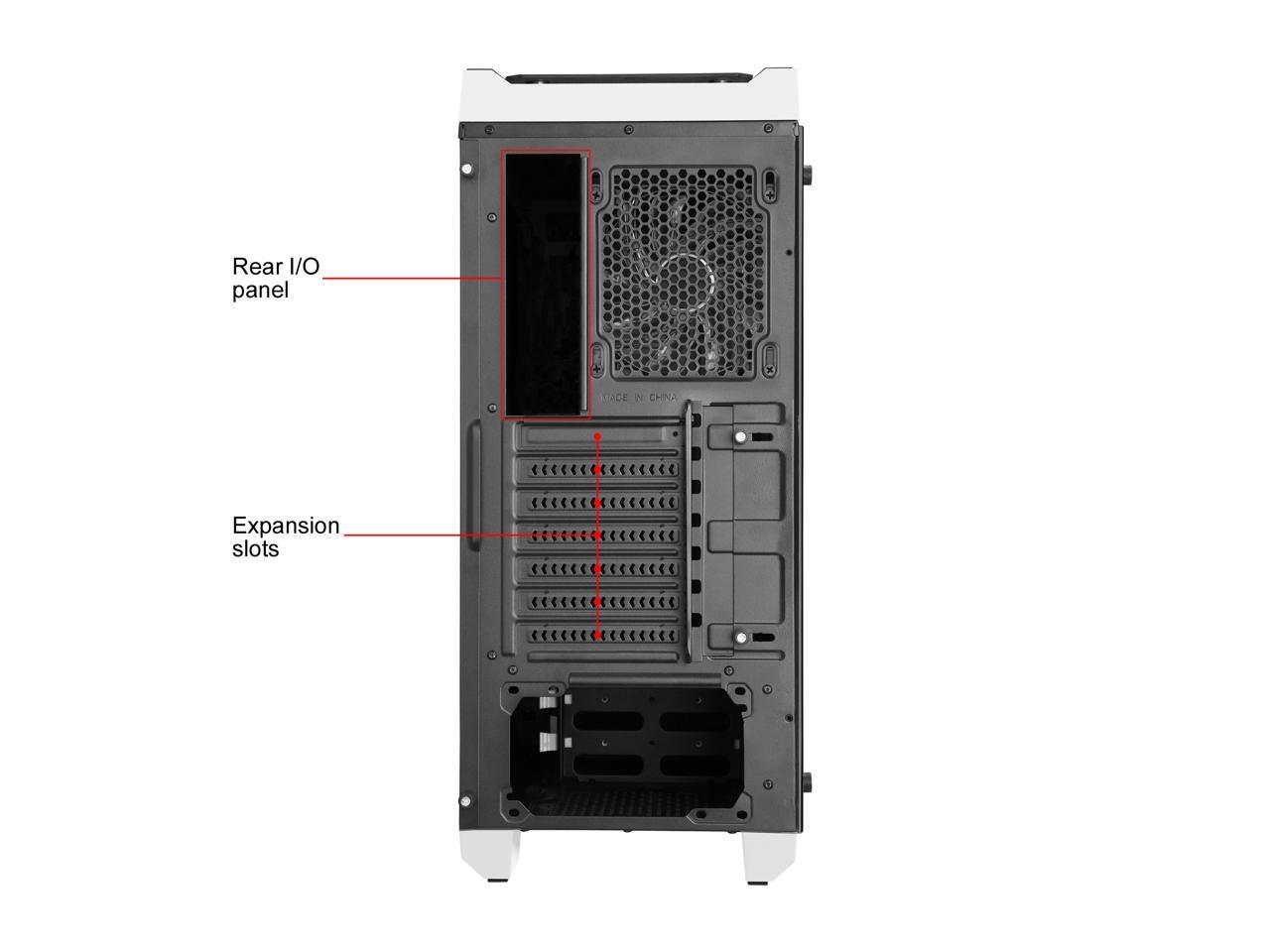 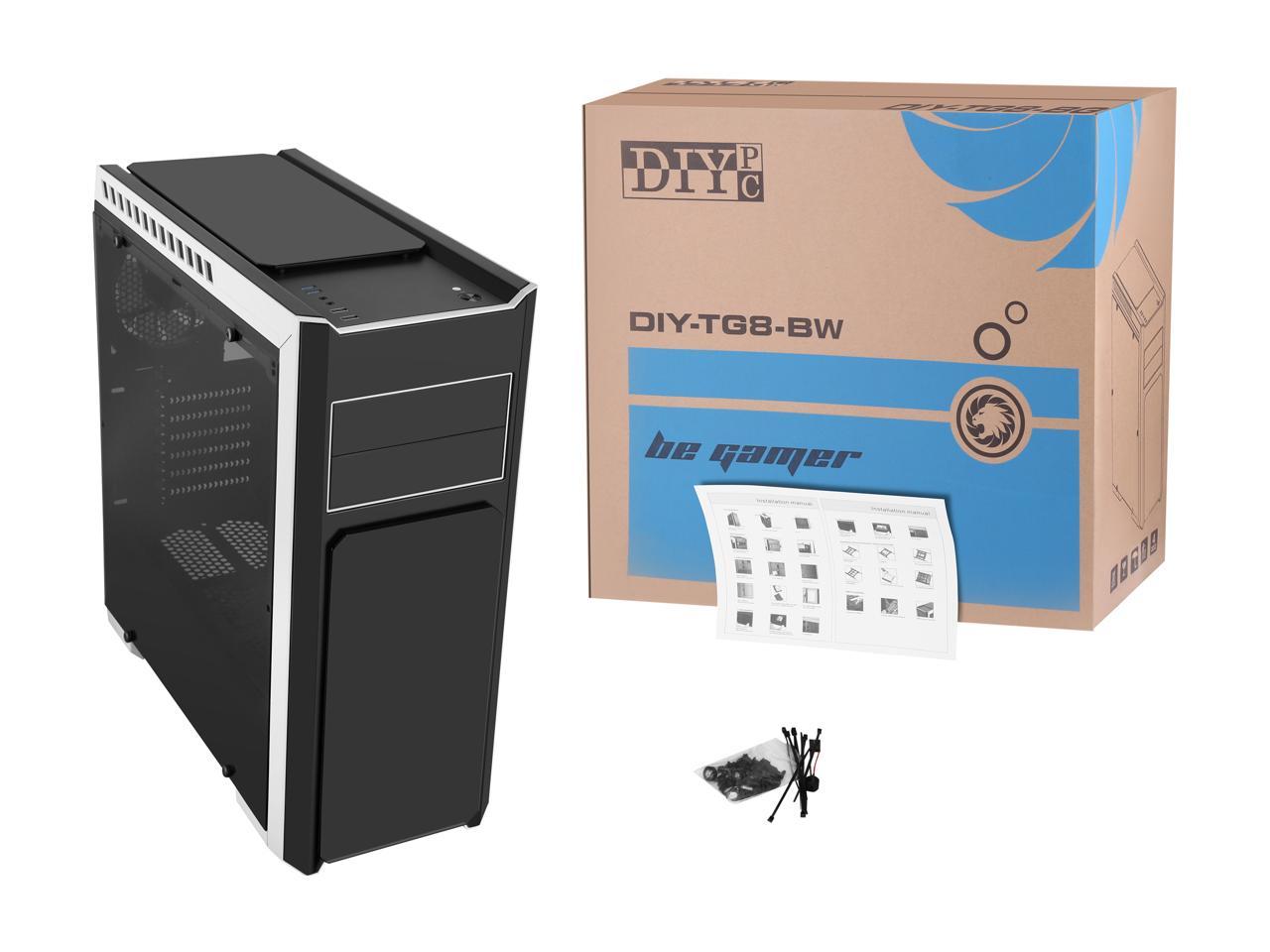 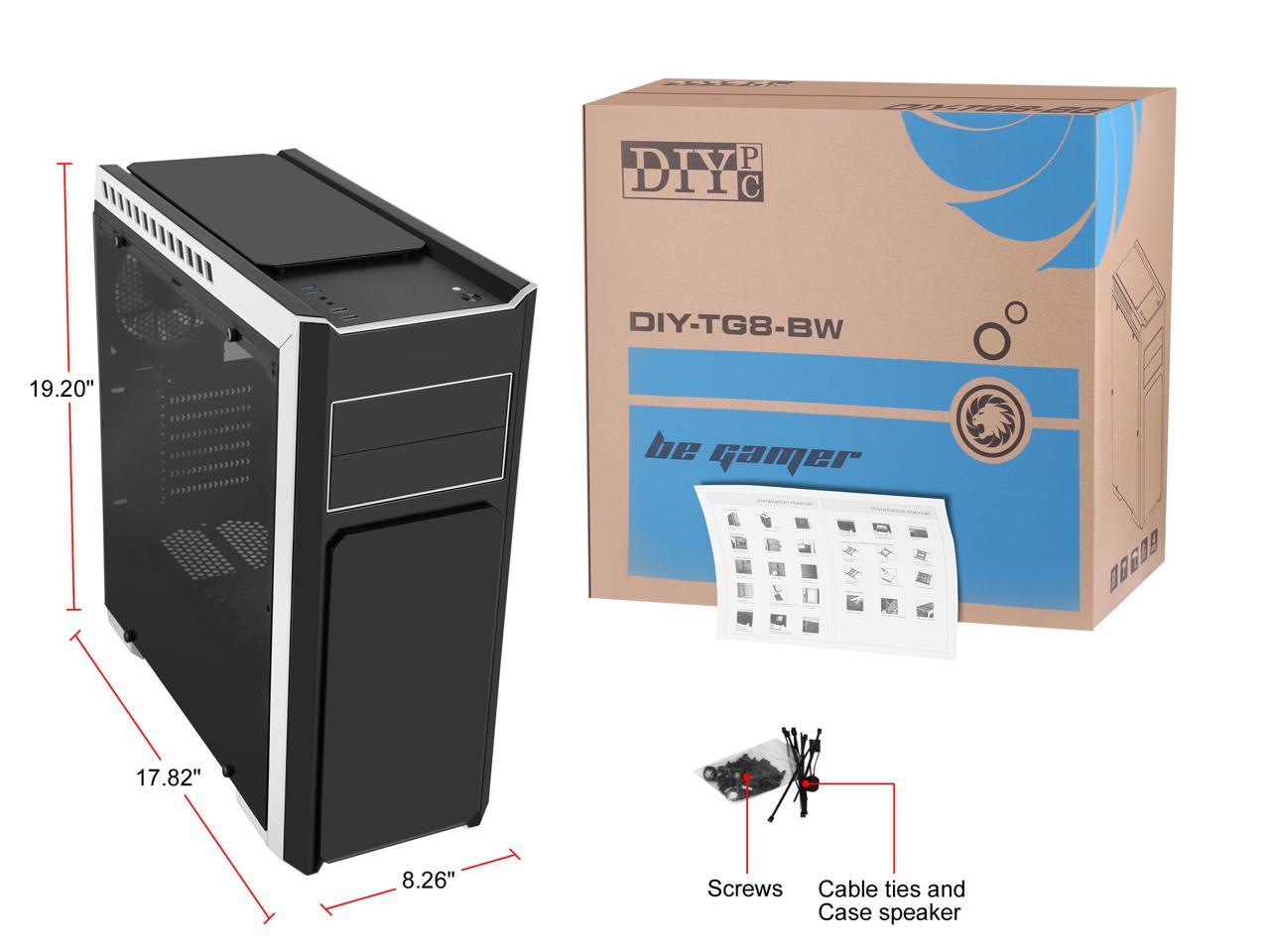 With roomy interior space, the mid-tower gaming computer case gives you great flexibility to build your system. In addition to support for a Micro ATX, ATX or ITX motherboard, the DIYPC DIY-TG8 can accommodate graphics card of up to 400mm in length, and CPU cooler of up to 163mm in height.

With the ability to support up to five fans (three fans preinstalled), the DIYPC DIY-TG8 creates heavy duty airflow to cool down, even the most extreme system.

The DIYPC DIY-TG8 is water cooling ready, so you can choose to cool down your hottest components - the GPU and CPU, with water coolers (sold separately). Its front panel can fit up to 280mm water cooling radiator.

The pre-installed LED light fans not only produce voluminous airflow but also create eye-catching, dynamic lighting effect, making your gaming rig shine and enhancing the overall appearance of your system.

The dust filter at the bottom keeps your computer clean and protected from dust.

Pros: 2x Optical drive slots: very few cases with tempered glass offer any optical drive options. Price/performance: Solid case for the price. Quiet fans that perform well. LED lighting is limited to blue but does a solid job of pushing a bit of light over most of the components.

Cons: Inferior air flow through the front panel. The spacing between the tempered glass and the case is small that it doesn't allow that much air flow through the front of the case. I would steer away from this case if you're planning on overclocking. No grommets on any of the cabling holes Frame itself is made from cheaper materials - mine held up fine in shipment, but it feels like they would bend and flex easily.

Pros: huge room for any parts, amazing tempered glass panels, hdd, ssd and fan placement. set mine up with a push pull front 240mm rad and a dual fan evga 970. this is about the most beautiful and stunning case ive ever seen online or in person.

Cons: front panel was a litte hard to put back on after installing the front fans, and the front lower fan screws are only accessible from INSIDE the case, had to mod my fans to get the bottom most 2 screws in.

Overall Review: very recommendable would love to build in this case again.

Cons: - The HDD drive bay got in the way of my RM-850x PSU, I couldn't get it in the case with the cables, the PSU is about an inch longer than the CX-750 I had laying around which barely fit. So I ended up having to chop the bottom half of the drive cage off to fit the cables underneath.

Overall Review: Other than the drive bay modification, which is hidden by the lower shroud I like the case and have no complaints. Just want others to be aware that they may need to do the same. I do want to replace the fans but that's more of an aesthetic thing since I'm going for a teal LED color scheme, not blue. I would recommend the case.

Pros: Blue fans look really good and the over all construction looks very high quality. The air flow has definitely improved with spacing added in between the case and fans. Very nice to build in with plenty of tie down points are slots around the mobo to route cables. 9/10 will buy again

Cons: Not sure why the back panel is also glass as you would think that that adds extra cost for something that isnt seem almost ever. It should be replace by a steel white panel that bulges out to add extra room for cables. By final complaint is the pci covers. They are not individual covers you can take in or out. They are physically attached to the case and have to be bent and broken out of the case. Which is super annoying if you already have the mobo installed.

Pros: Its one of a kind, 4 glass panels is just awesome, its got alot of custom aspects. So much i want to say about it. Its sturdy and looks really clean. class is thick and not in any way cheap or scratch easily. Its very well made, the motherboard and other components have fit in it so far.

Overall Review: I did my research and this one fit my needs.

Pros: Looks pretty, at least when powered off (or on if you disregard the fans; more on that below).

Cons: Where to begin? - The LEDs on the fans are BRIGHT. I'm pretty sure you can see this case from low Earth orbit at night. Plan on replacing these fans if you ever want to watch or play something in the same room as this thing. - In the image, it has three blue LED fans. Mine came with two blue fans and one red fan. The sad thing is, this could have easily been caught by QC by looking at the color of the stickers on the fans, which indicated the color of the LEDs. This is bad QC at best, and false advertising at worst. I guess I'd be more upset if I didn't feel the need to replace the fans anyway (for being too bright). - Several of the screws holding in the fans had been over tightened and stripped. Another screw was only halfway in and visibly sticking out the rear of the case. - The only filter this case has is for the PSU, on the bottom, which then vents directly out the back. This filter is nearly impossible to remove without tilting or lifting up your case, and even harder to put back in (there is no "sliding" it in and out, and it hooks in from all 4 sides). Plan on lots of dust getting into your case. - The face of the screws that hold the glass to the chassis are not parallel in some cases. This results in their knurled sides digging into the glass when you screw them in. Mine already has several chips of glass missing from this. One can bend these back into place, but they really need better mounting so this doesn't happen in the first place. - The gap between the front/top glass panes and the case was very narrow, restricting airflow. I've since added in additional spacers and substituted longer screws as necessary, but it'd be better if they gave it a little more room to begin with. - The power supply is rammed up against the frame of the internal 3.5" drive bays. This makes the benefits of owning a modular power supply worthless, as you either have to plug in all the cables you will need ahead of time, or try to plug them in by cramming the cables, and you fingers, into a tiny space between your PSU and the drive bays. - This has three mounting points on the back side for 2.5" drives. However, one of them is so far away from the other two (as well as the 3.5" bays) that you will almost certainly have to run a dedicated power cable just for it. This could have easily been rectified by simply moving where this drive was mounted, or even just rotating it so it could face the drive's ports toward the other drives. As such, I'm just using it to hold a cold spare drive. - The cable management leaves much to be desired. For instance, the 8-pin CPU power plug on my PSU just BARELY reaches when I run it in the shortest possible path between my PSU and motherboard. As the position of this power plug is fairly standardized in the 10 to 11 o'clock position relative to the CPU, you'd think they'd make it easy to get a cable there. Nope. - Could definitely use more USB ports on the front, particularly USB3 ports. I also wish the ports were horizontal, facing the front, instead of out the top. - Doesn't come with enough screws. I ran out of the ones they supplied and had to use the rest from my stash of spares.

Overall Review: To sum it up in one word: Avoid. I wanted to get a case with tempered glass panels, and that had several 5.25" bays, which are few and far between. In retrospect, I should have gone with something that was already well reviewed. Hopefully I can prevent someone else from making the same mistake.

Cons: -Front is designed for 120mm fans, 140mm fans will not line up correctly with the front glass panel (only matters if they are LED) -PSU area is extremely tight, modular cables must be plugged in prior to cramming in the PSU. Will not fit larger PSU's. -The ONLY space to "hide" excess cables is not covered by the PSU shroud and is completely visible from the outside. -Easy to lose the little rubber pieces that hold the glass panels in place, lost two before I knew they existed and only found one. -Pop-out PCie brackets.

Pros: Feels nice and solid to me, the sheet metal is nice and thick, well painted, and put together with a bunch of rivets Excellent value Tempered glass, at $30-$35 after rebate and gift card 3 fans with room for 2 more Crazy fast shipping VERY well packaged It looks really good.

Cons: Knock-out PCIe slots on the back, but at this price complaining about it seems ridiculous. Seems like air flow could be better, but improving airflow in this case would be pretty easy.

Overall Review: -This is my first build, and it isn't done yet, but I wanted to get this review in before the sale ends. -I put my Seasonic M12II 520W Bronze power supply in with absolutely no problem. Really easy, although if you have a super long power supply it might be tight.