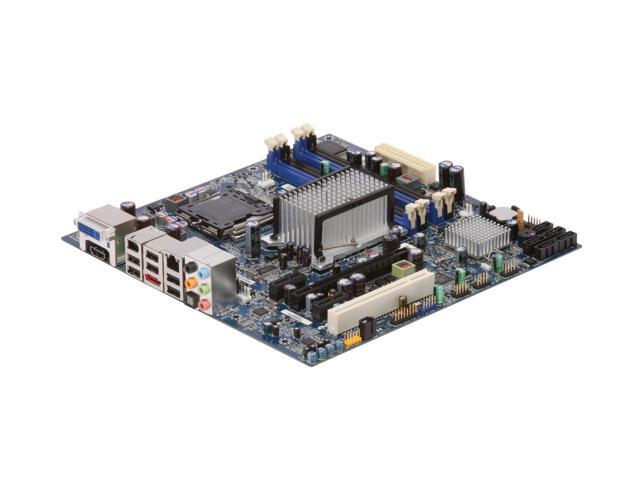 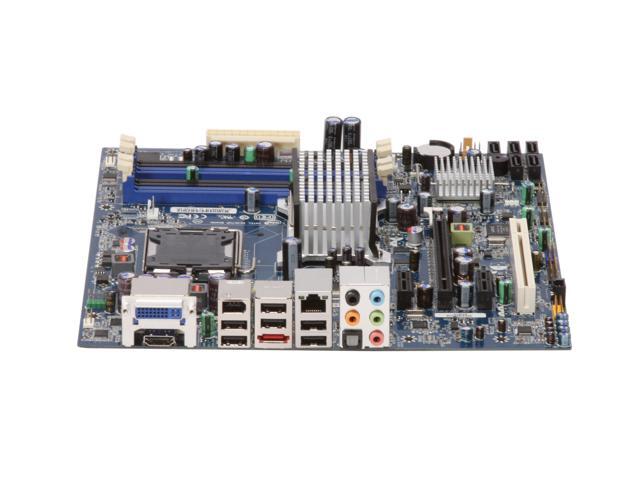 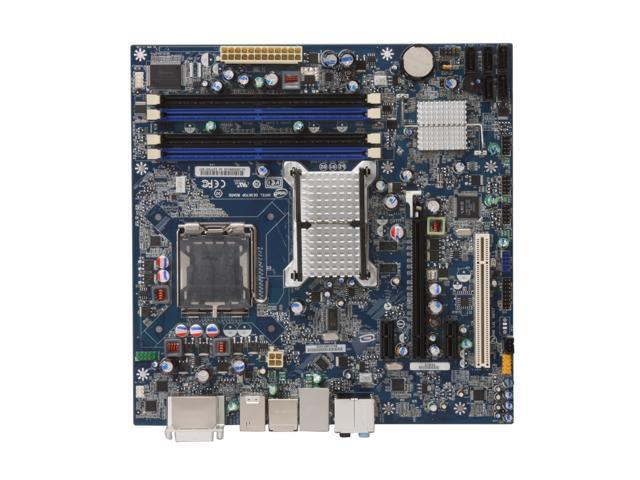 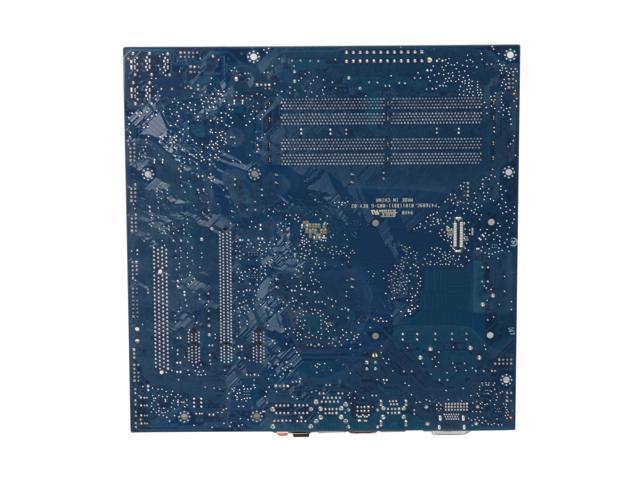 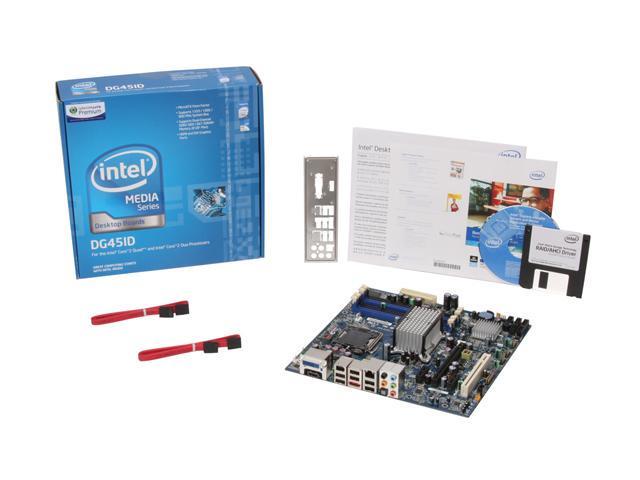 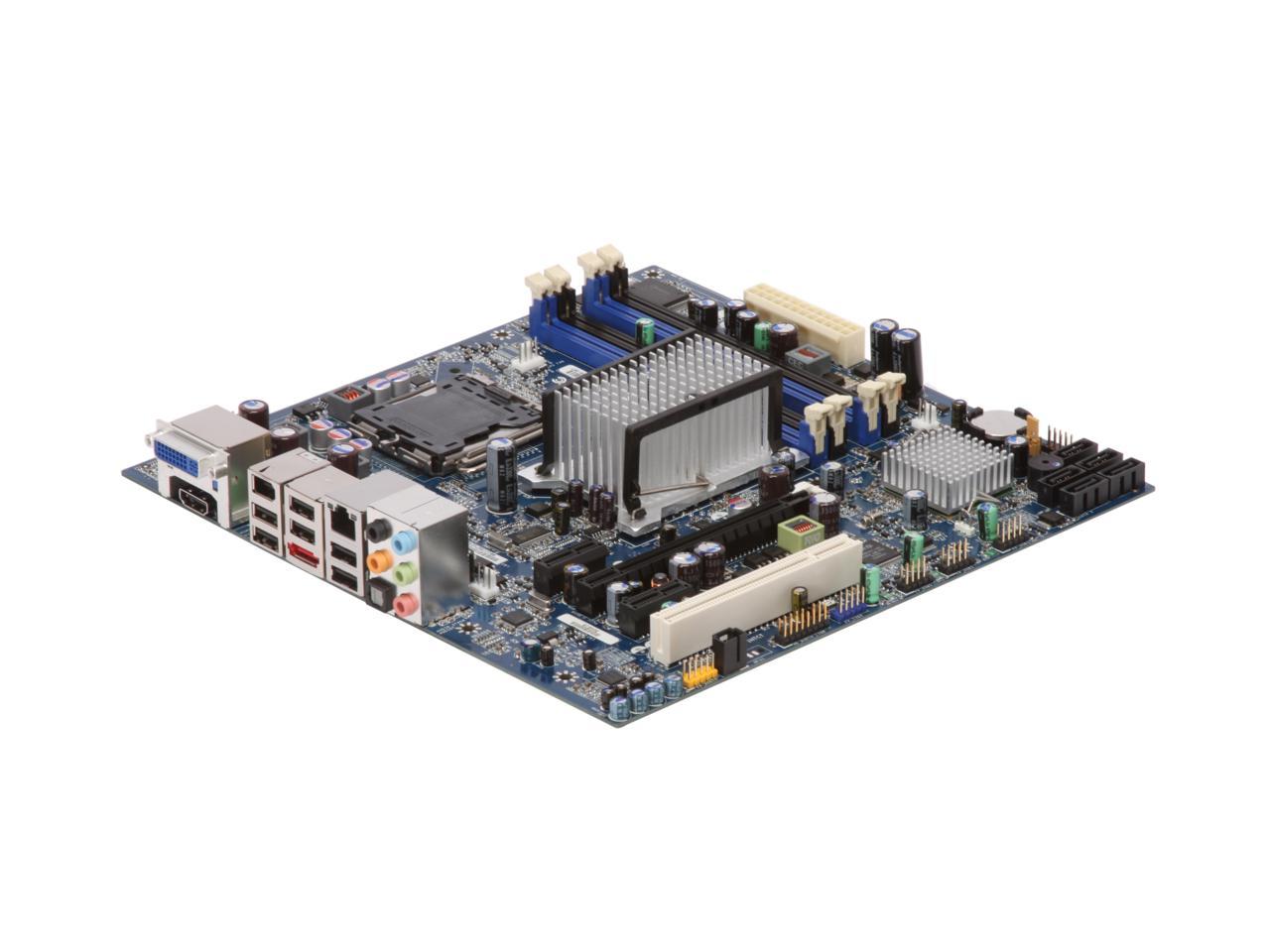 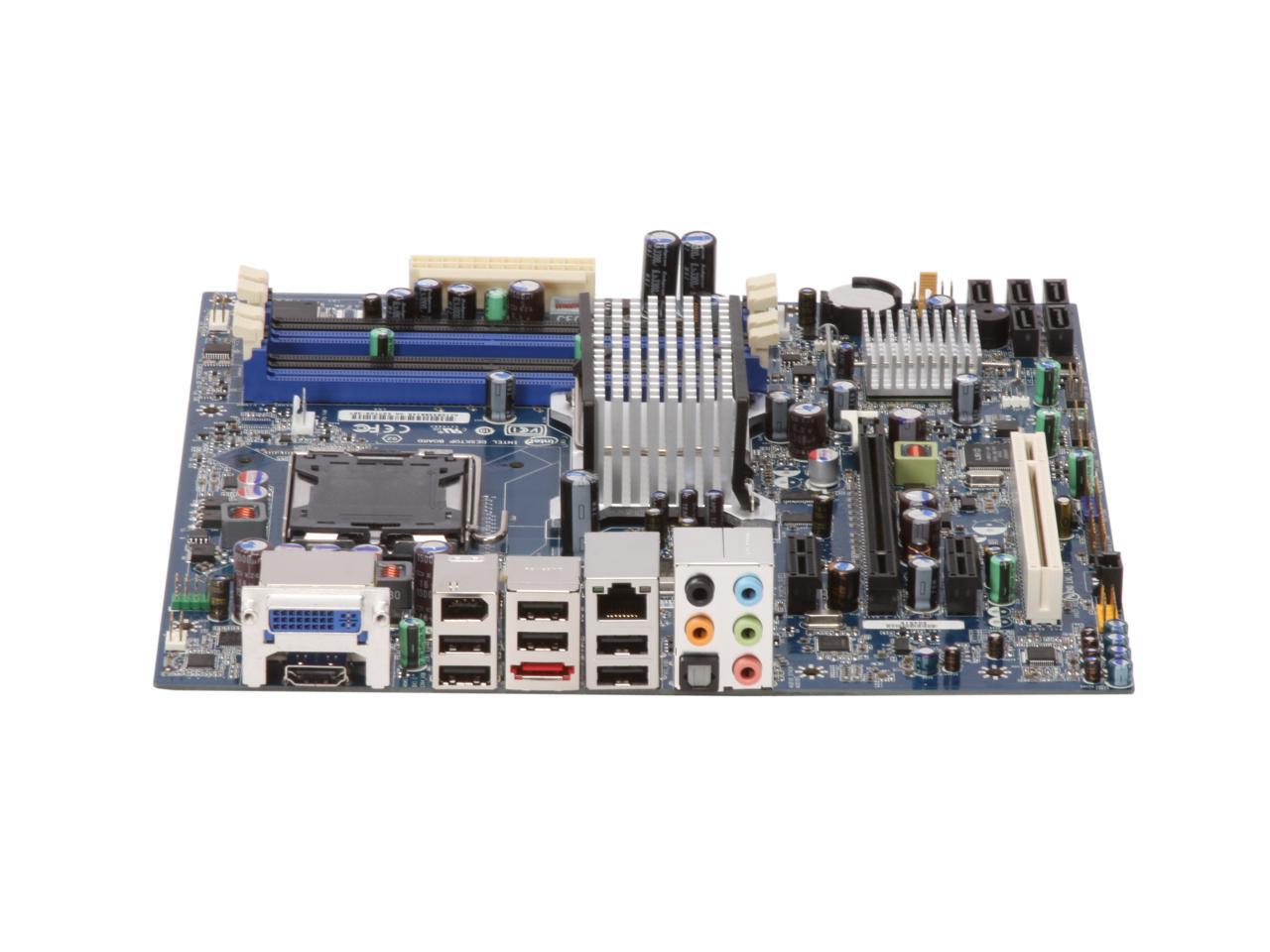 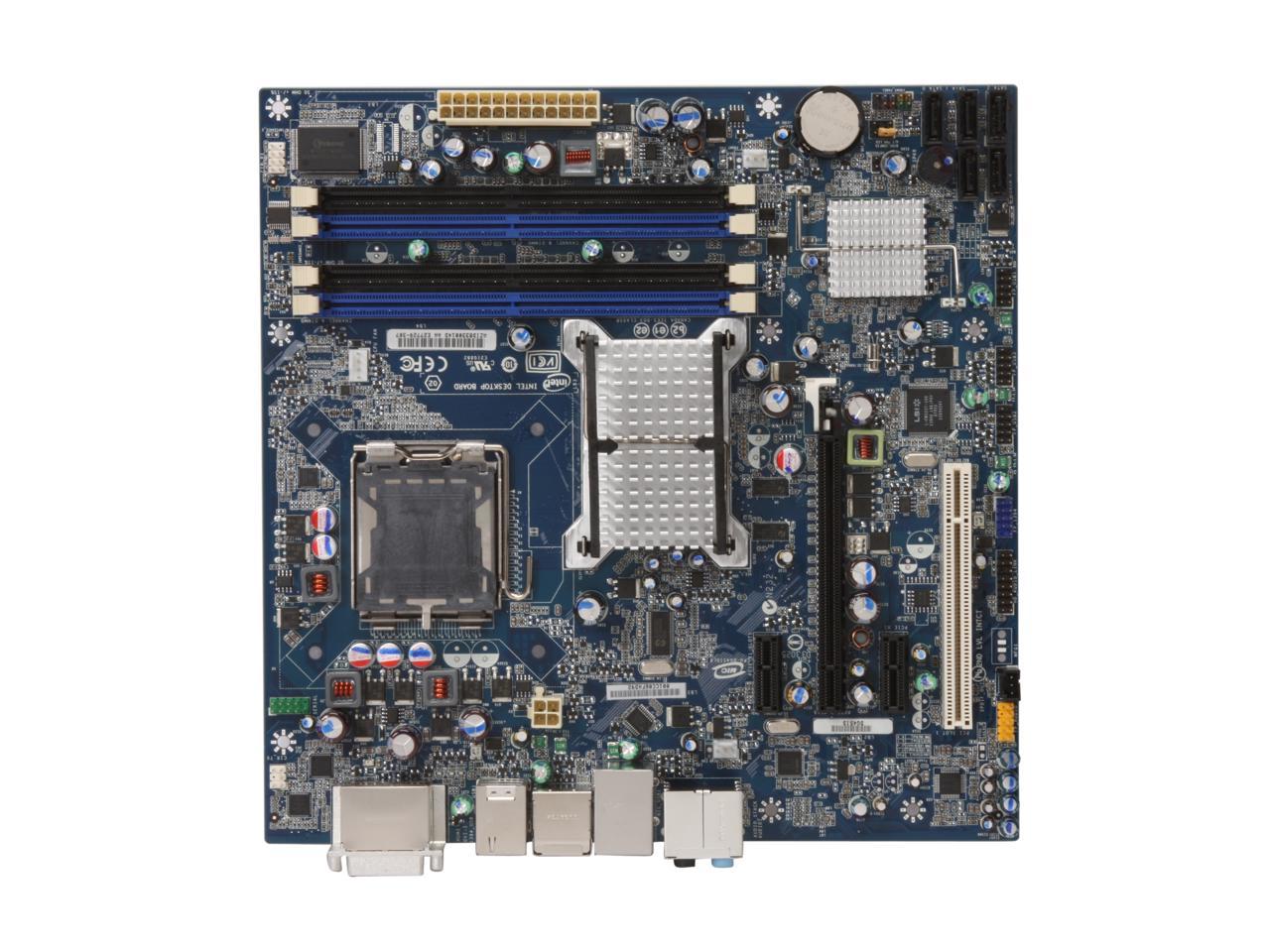 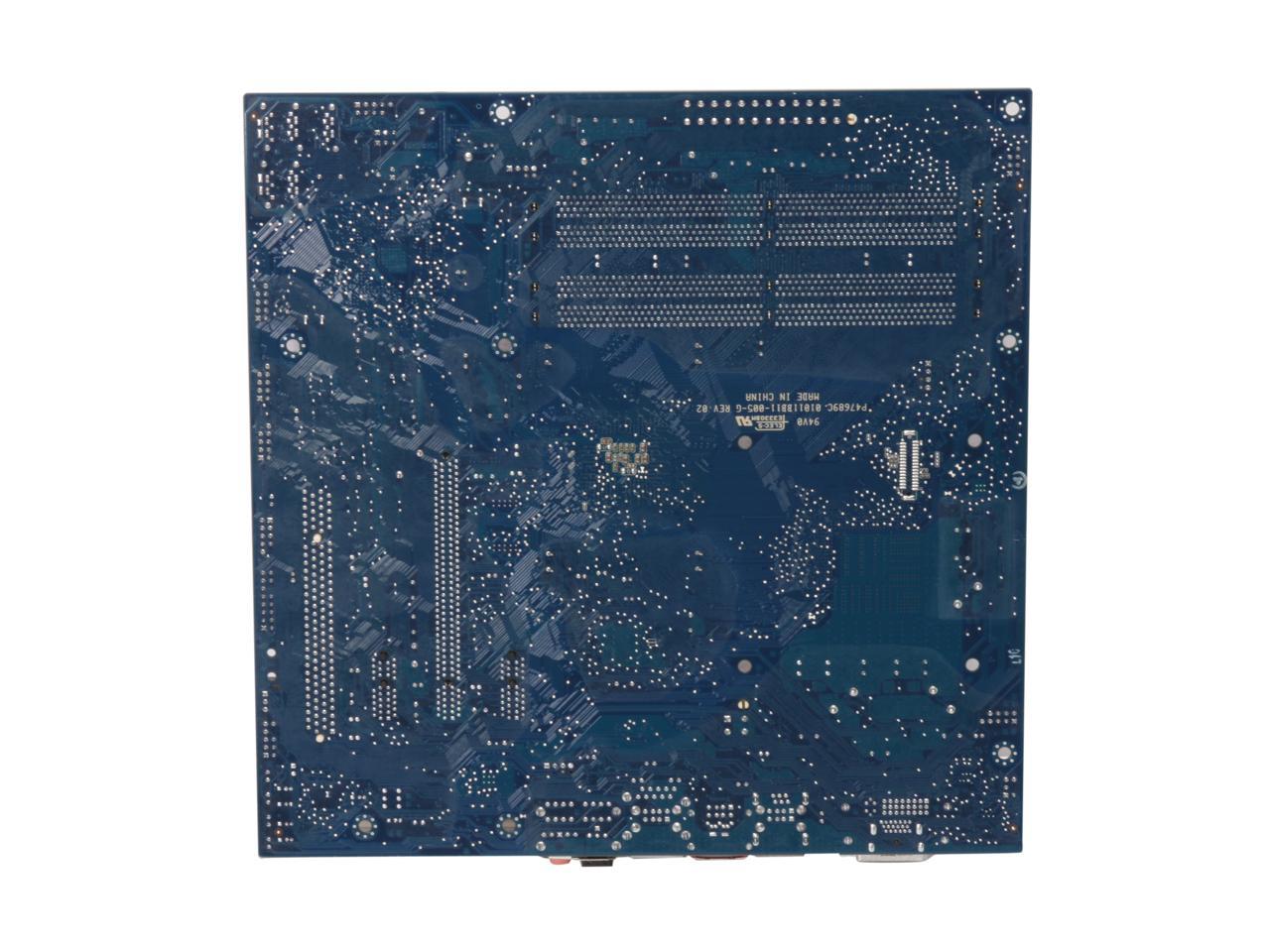 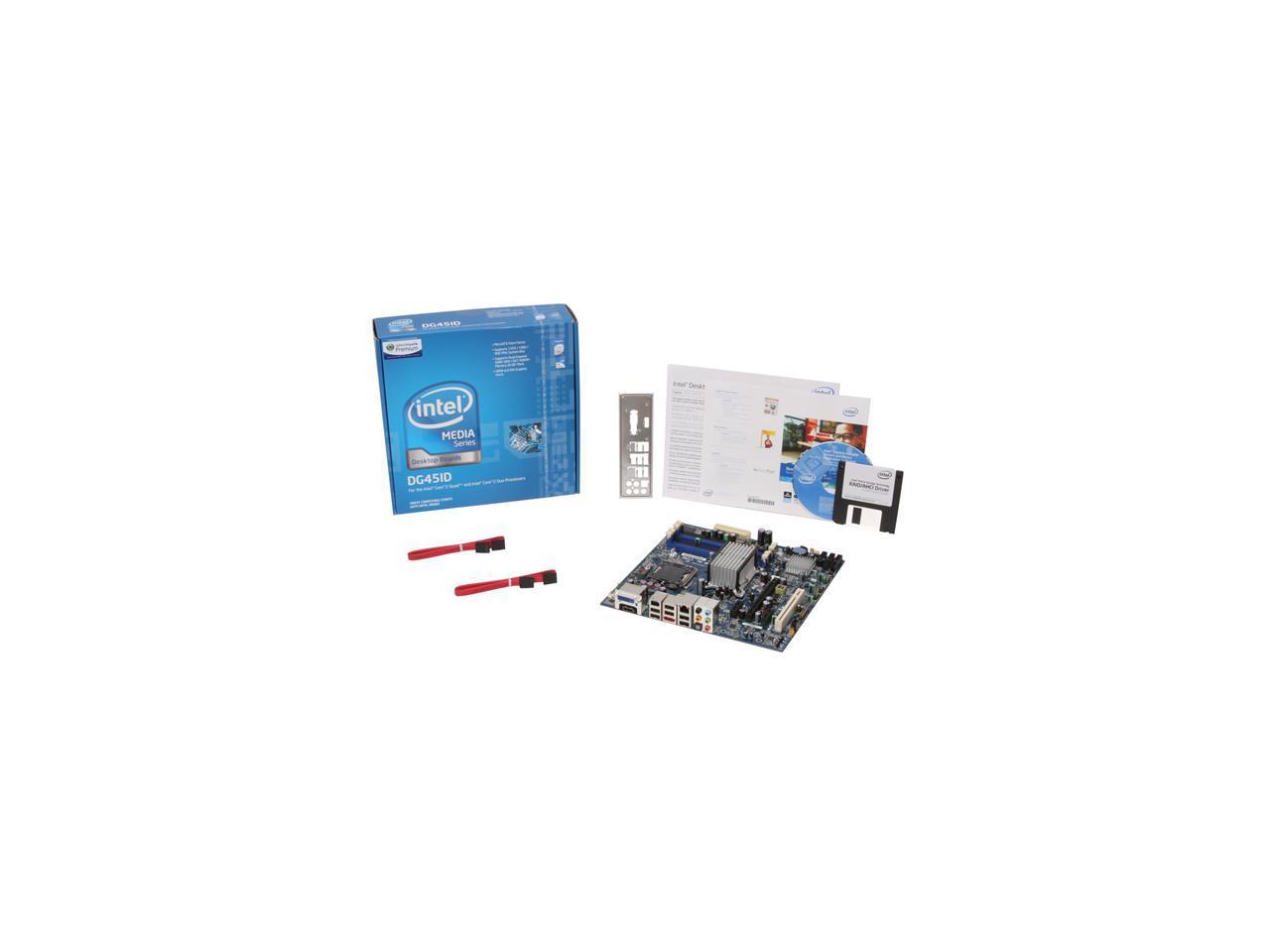 (137) Write a Review
OUT OF STOCK.
Overview
Specs
Reviews
Take your home entertainment to the next level with Intel's Desktop Board DG45ID. Built in the micro-ATX form fact, it supports Socket 775 CPU's including Intel Core 2 Quad and Duo processors along with dual-core Pentium and Celeron CPU's and Celeron 400 chipsets. Up to 8GB of DDR SDRAM system memory can be installed in the four sockets. With a front side bus of 1333 Mhz, 800, 667 and 533 Mhz DIMMS are supported.
An Intel Graphics Media Accelerator X4500HD with integrated HDMI and DVI-I display outputs, hardware-accelerated decoding and support for Dolby Home Theater means that your videos will look cinematically clean, crisp and be accompanied by theater-quality sound emanating through the onboard 8-channel audio subsystem.
The DG45ID also features Gigabit Ethernet LAN and interfaces for six USB 2.0 and a pair of Firewire ports, six Serial ATA connectors – including support for various RAID configurations and connections for an IR transmitter/receiver for remote control. Connectors for a PCI-Express x16 and PCI card along with a pair of PCI Express x1 cards are also provided to offer the maximum potential.

Learn more about the Intel BOXDG45ID

Pros: set up Raid 1 easily, all features worked on board, lots of USB's and Sata connections, gigabit LAN

Overall Review: Good built in Graphics, HDMI out, perfect for a small work computer or a home theatre PC

Pros: Everything worked great out of the box. No problems with HDMI or optical audio out. Has two PCI-E x1 slots, which seems to be rare on a uATX board. I needed it for my two tuner cards. No fan on the northbridge = quiet. This board is great for HTPC use with the X4500HD integrated graphics.

Cons: The northbridge heatsink does get hot. You definitely need good airflow through the case with this board.

Cons: For some reason, I can't load Win7 unless I remove 2 of the 4 ram chips. I can load Vista with all 4 so I don't think its the board.

Cons: One egg off due to the very long POST! Windows 7 boots faster from SSD drive than this mobo POSTs.

Overall Review: This is a no-looking-back motherboard: it has no IDE and no VGA.

Pros: Great little board for a HTPC. Includes sufficient audio and video for smooth playback of 1080P X264 movies.

Cons: Will not boot from an ISCSI HBA. I have tried a Intel Pro 1000 server adapter, Broadcom NetXtreme and Qlogic QLA4050C and all refuse to work properly on this board. Optical audio out did not work out of box. Had to add a header to a empty PCI slot with a optical jack.

Pros: I've been using Intel boards in the past and this one is the fastest one I've used. Newer Intel chipsets run faster than it's predecessors. I've tried other Intel mobo with different chipsets (G31, G33, P35) using the same CPU and memory chips and this one (G45) is blazingly fast. Had no problems installing Vista and Windows 7 on this mobo.

Cons: I've had issues in DVD burning software when I configure the SATA port to AHCI. Had to put it back to IDE mode. Memory timing can't be set lower than 5.

Pros: This motherboard is a really great choice if you are building a Home Theater PC (HTPC) or a mid-ranged desktop. If you are a serious gamer, then this is not the motherboard for you. This board is meant for HTPCs because it features a solid on-board graphics chip and a decent sound chip. If you want to build a HTPC or a mid-ranged desktop, here are some reasons to buy this motherboard: 1) The on-board HDMI and SPDIF ports allow one to view high definition video and audio without breaking the bank by buying an additional graphics card. 2) RAID. Backup your media or your important files by mirroring your drives. This motherboard supports RAID 0, 1, 5, and 10. 3) It will fit into a small form factor case. It is a microATX form factor. I put it into an Apevia Q-Pack 2. This is perfect for HTPCs.

Cons: Honestly, I can't say that I dislike many things about this board except the fact that it sudden failed on me after approximately 29 months. In those 29 months, I have never had any issues with it; it just suddenly failed. f you are a gamer, here is some reasons not to get this motherboard: 1) You cannot overclock your processor, at all. Even if you wanted to get a little extra edge out of yout CPU, the features aren't there. 2) There is only one PCIe x16 2.0 slot. Which is fine if you only want one graphics card but if you're planning on running multiple in SLi or CrossFire, think again!

Overall Review: I'm not a hardcore PC gamer, but I am a heavy computer user. I am a programmer, I do video encoding, and I do play several video games. I used this motherboard in my first computer build and it was great, up until it died. I bought the same board to replace it with. Here are the specs of the build: -This Motherboard -Q8200 Core 2 Quad -6GB RAM (2x2GB Corsair DMS 2x1GB Crucial Ballistix Tracers) -Apevia 680W Iceberg Power Supply -500GB Maxtor and 1TB Seagate Barracuda

Pros: I had to flash the BIOS and after I did that, the case fans stoped working. Everything else ran fine but there was an ocaional blue screen and lots of restarts. This mother board acts up when you max out the memory to 8G's at PC6400, at 800MGZ, I heard that when you lowor the 8 G's to 677MGZ or whatever that number is. Its the memory behind 800. It runs fine or when you run it with 6G's it run fine as well. Oh well I RMA'ED it so we will see what happens with the new board.

Cons: It acts up when you max out the memory from time to time. Its like once every 6 to 7 start ups. I mean when you power the computer off and then the next day you start it up, it acts up by, booting to the big bad blue screen. I have windows 7 and all the right parts and it gave me troughable. So I RMA'ed it.

Overall Review: New egg is fast as hell with there RMA returns. Had New board in two days.