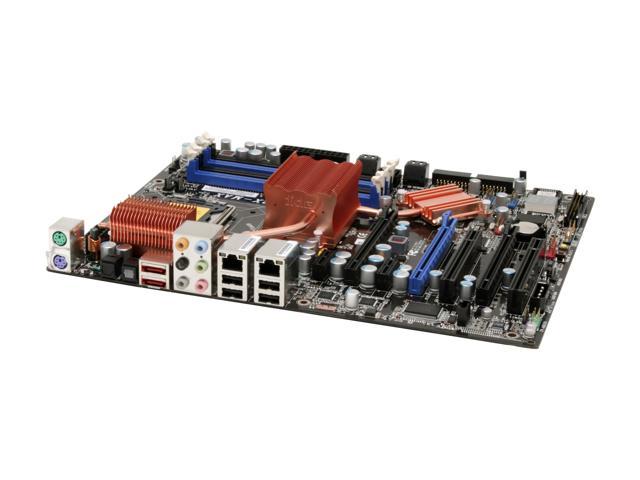 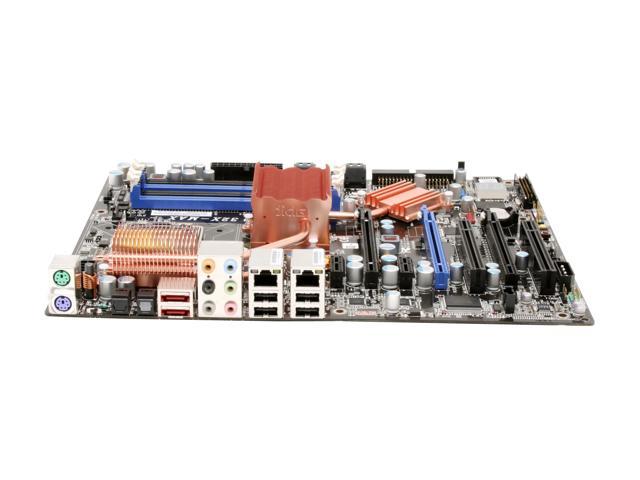 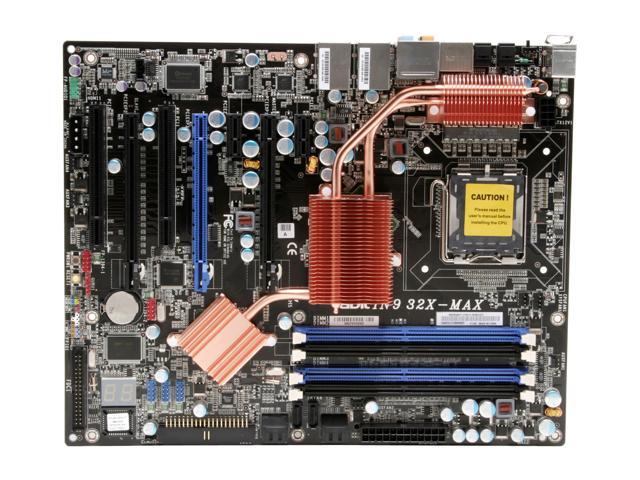 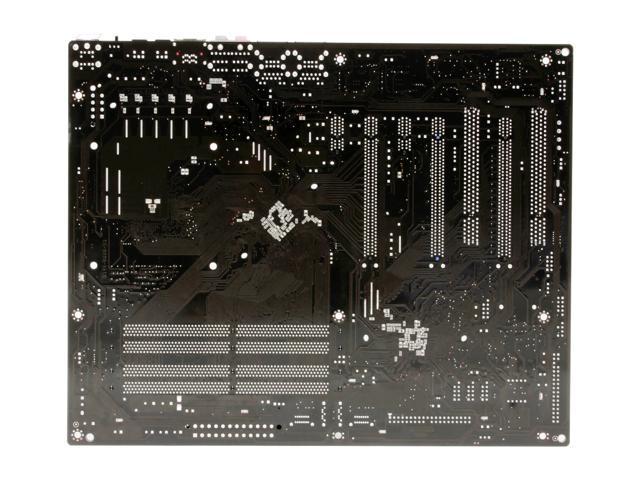 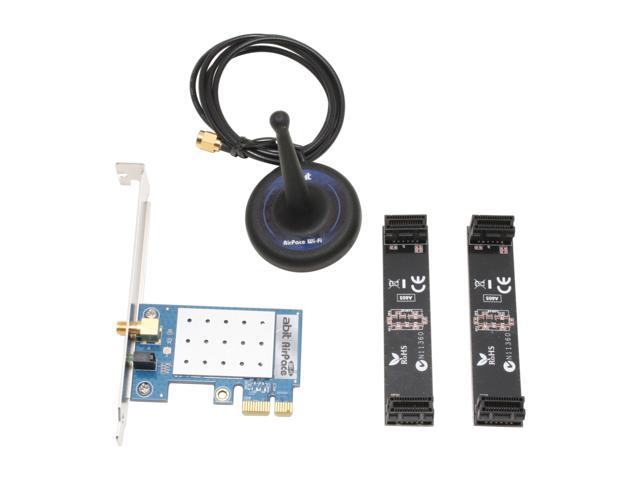 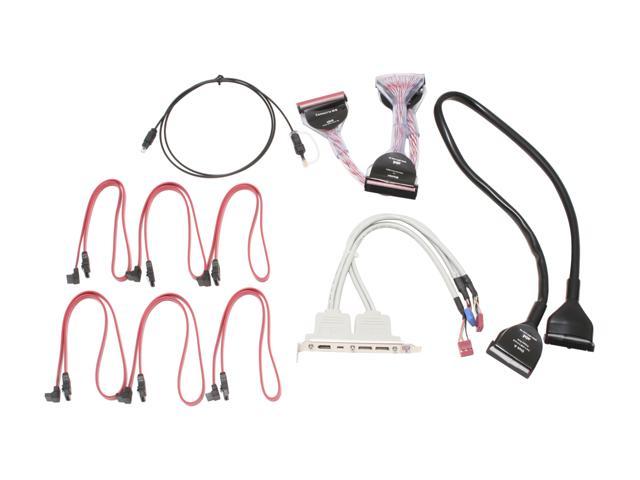 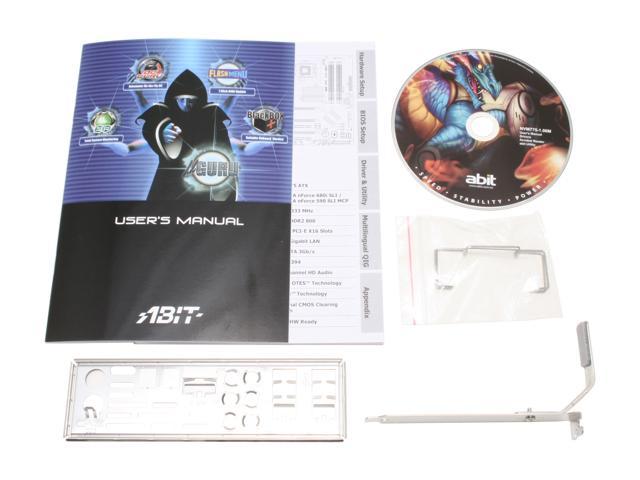 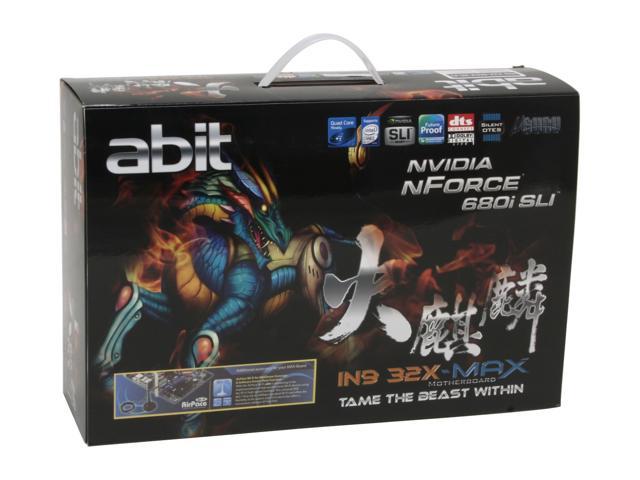 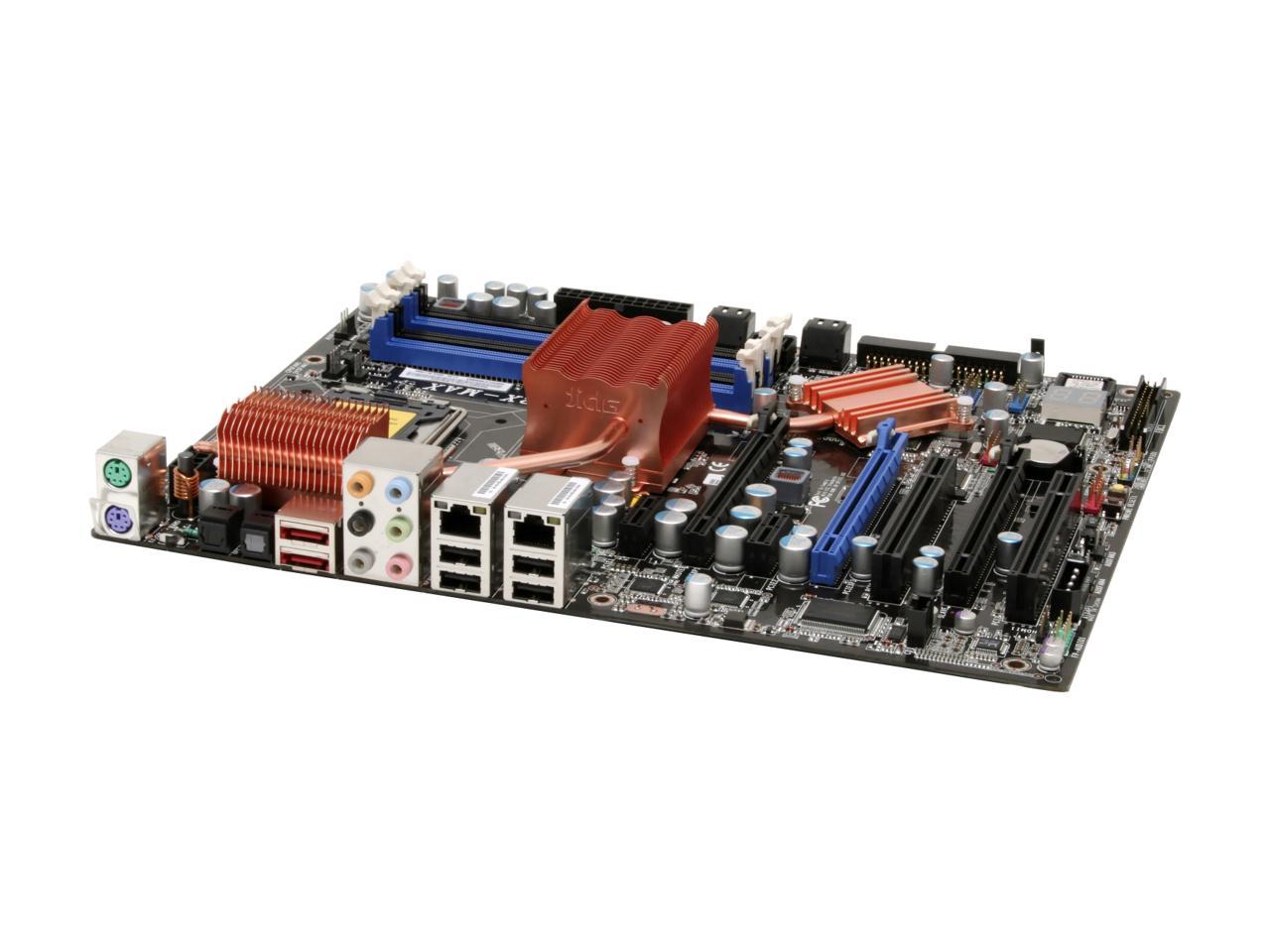 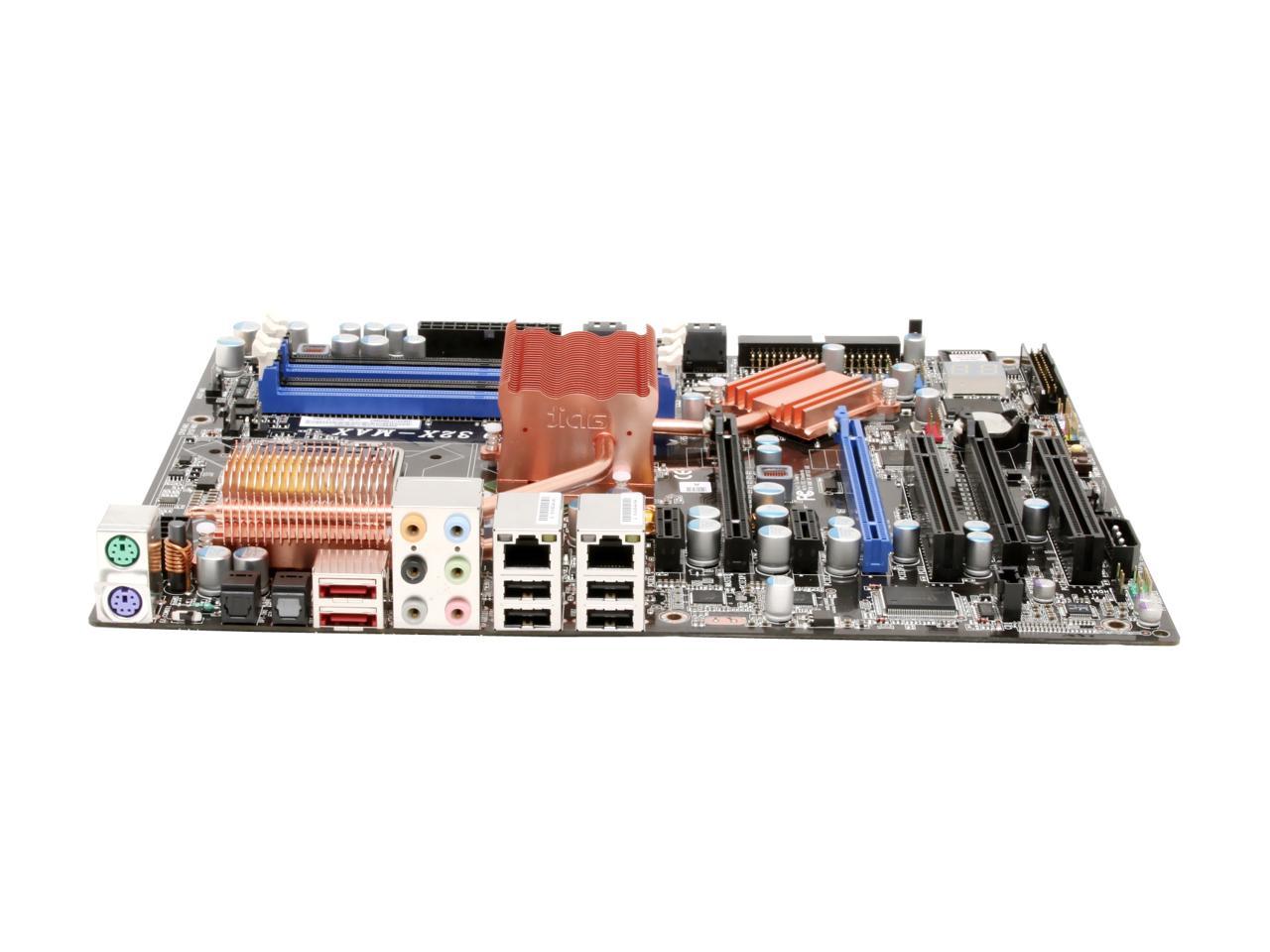 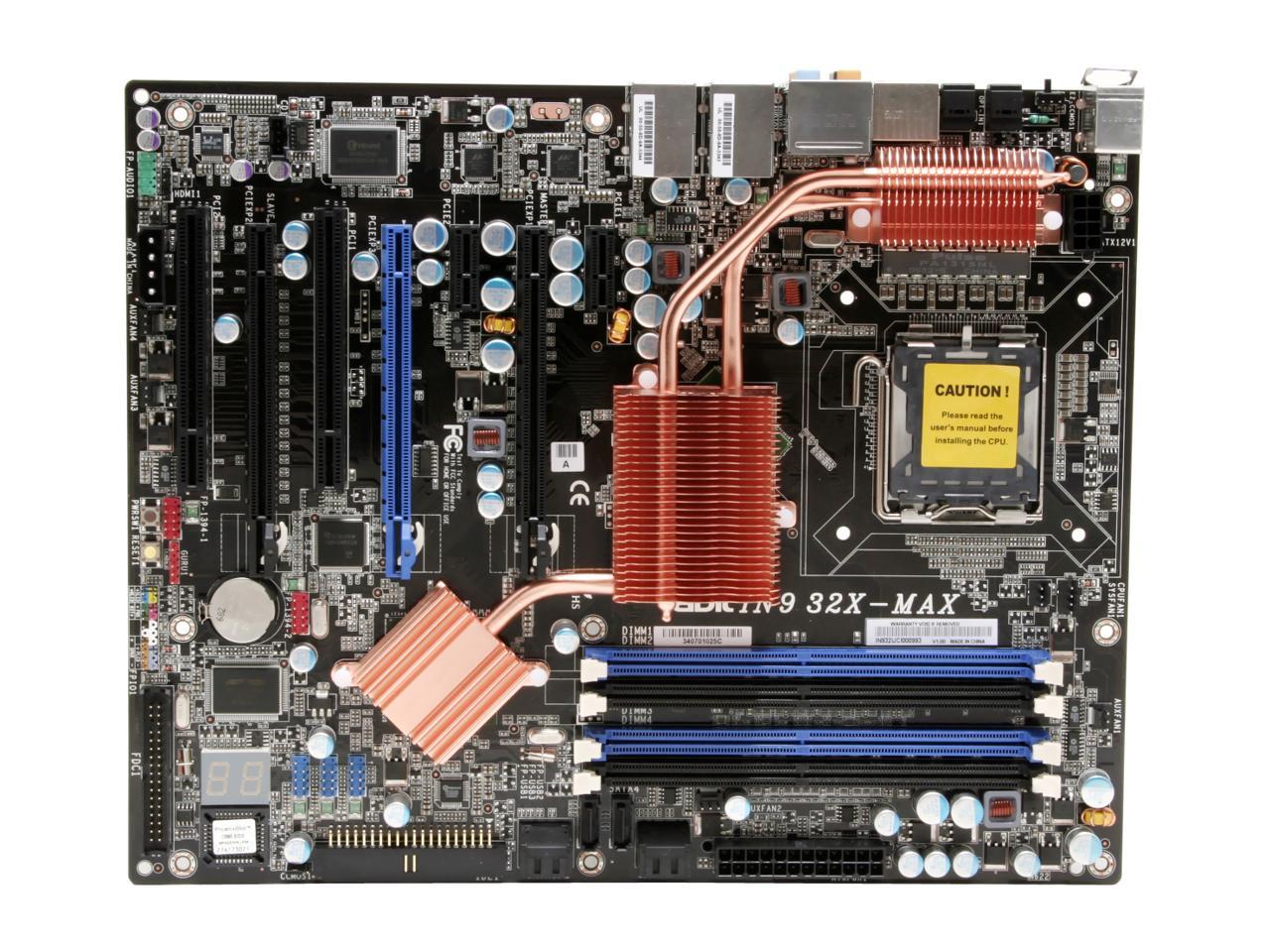 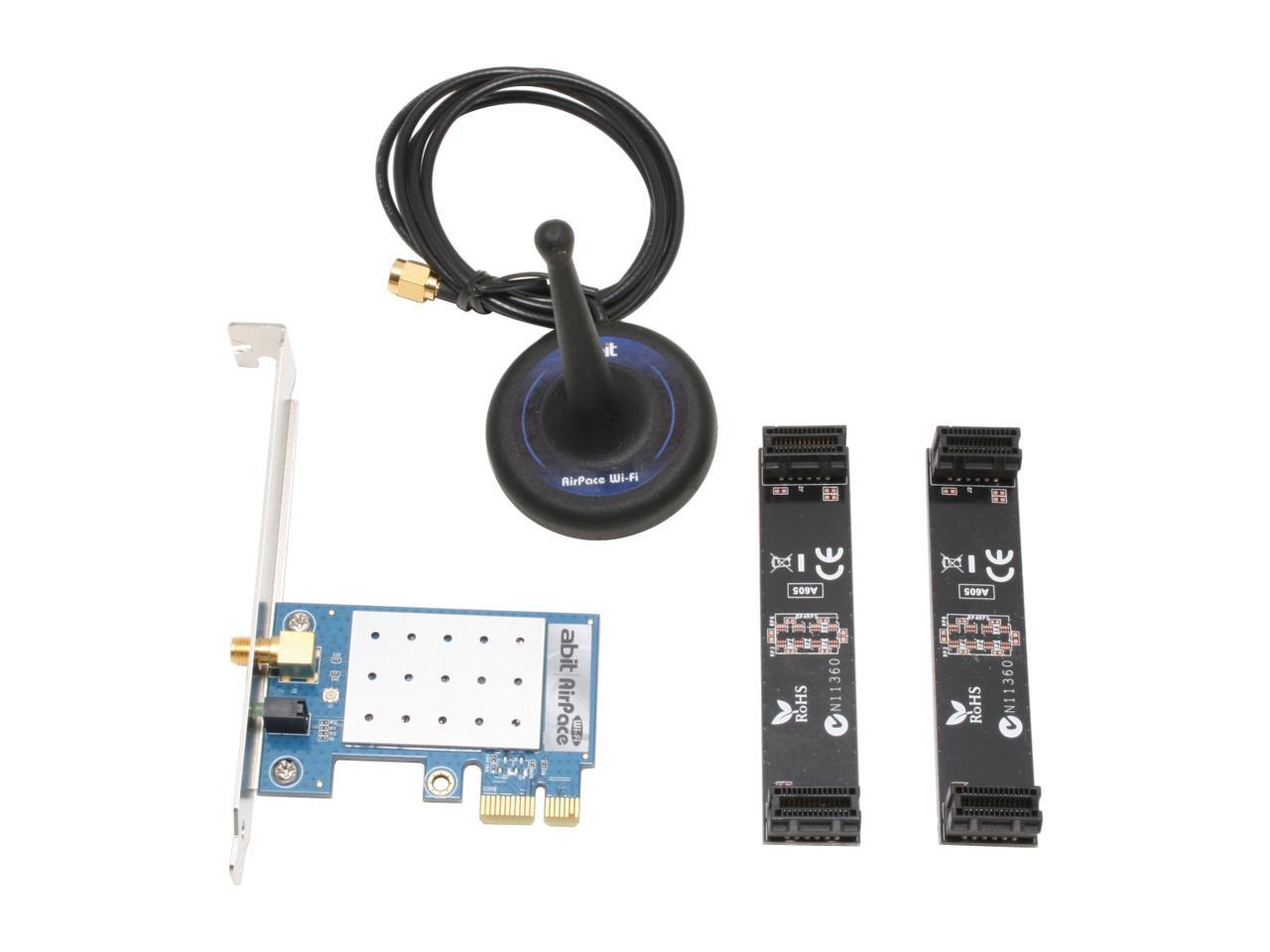 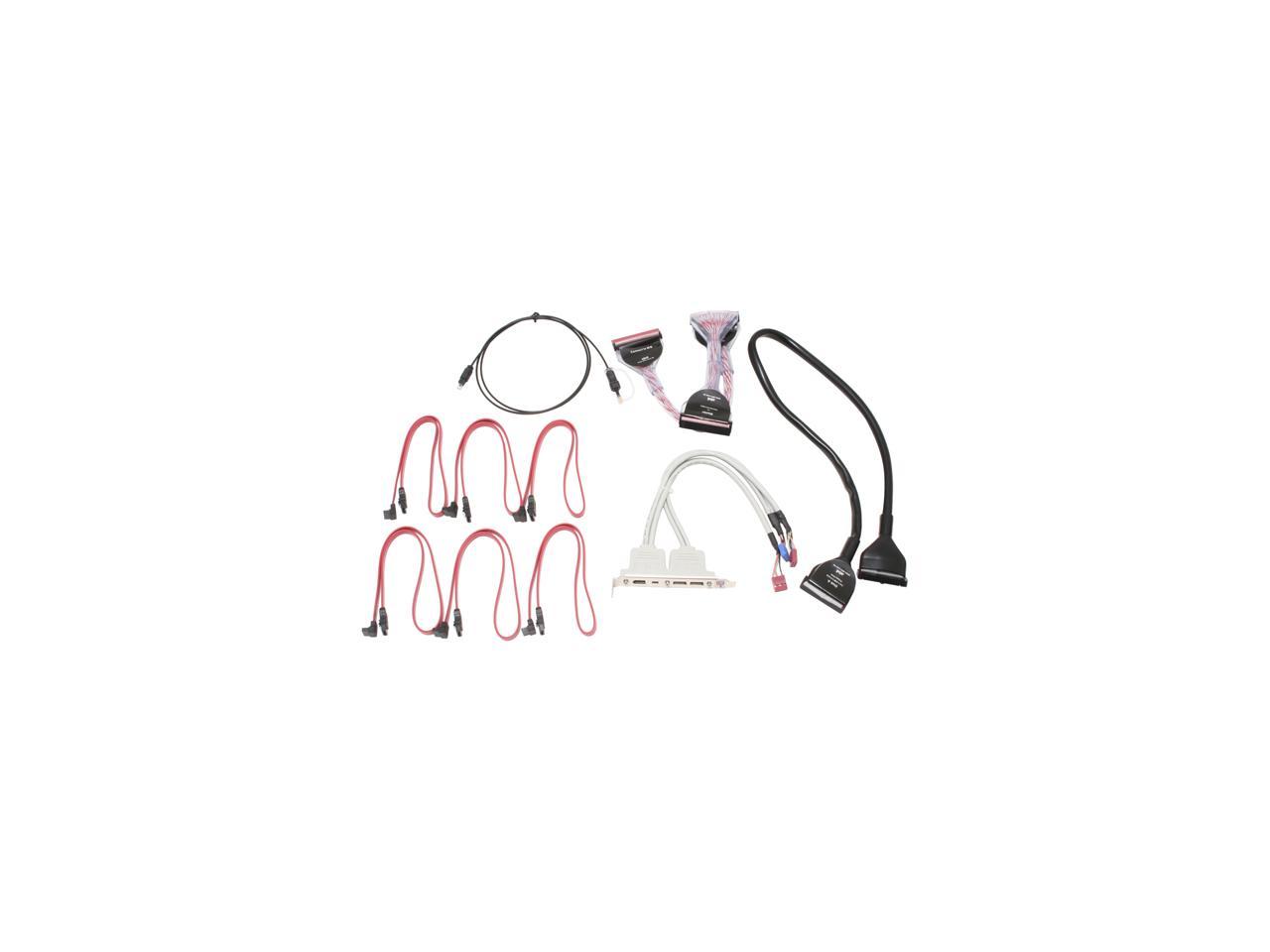 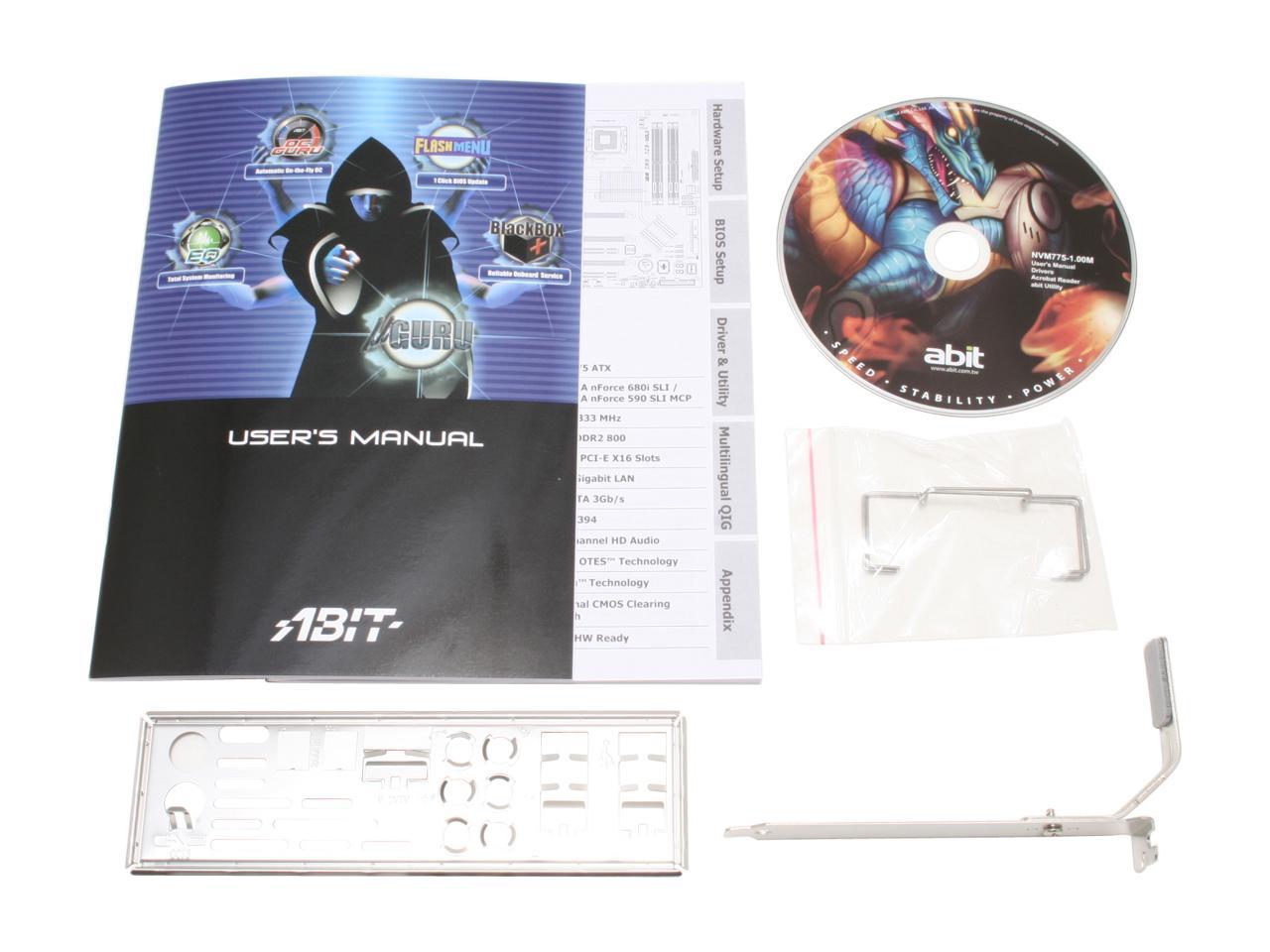 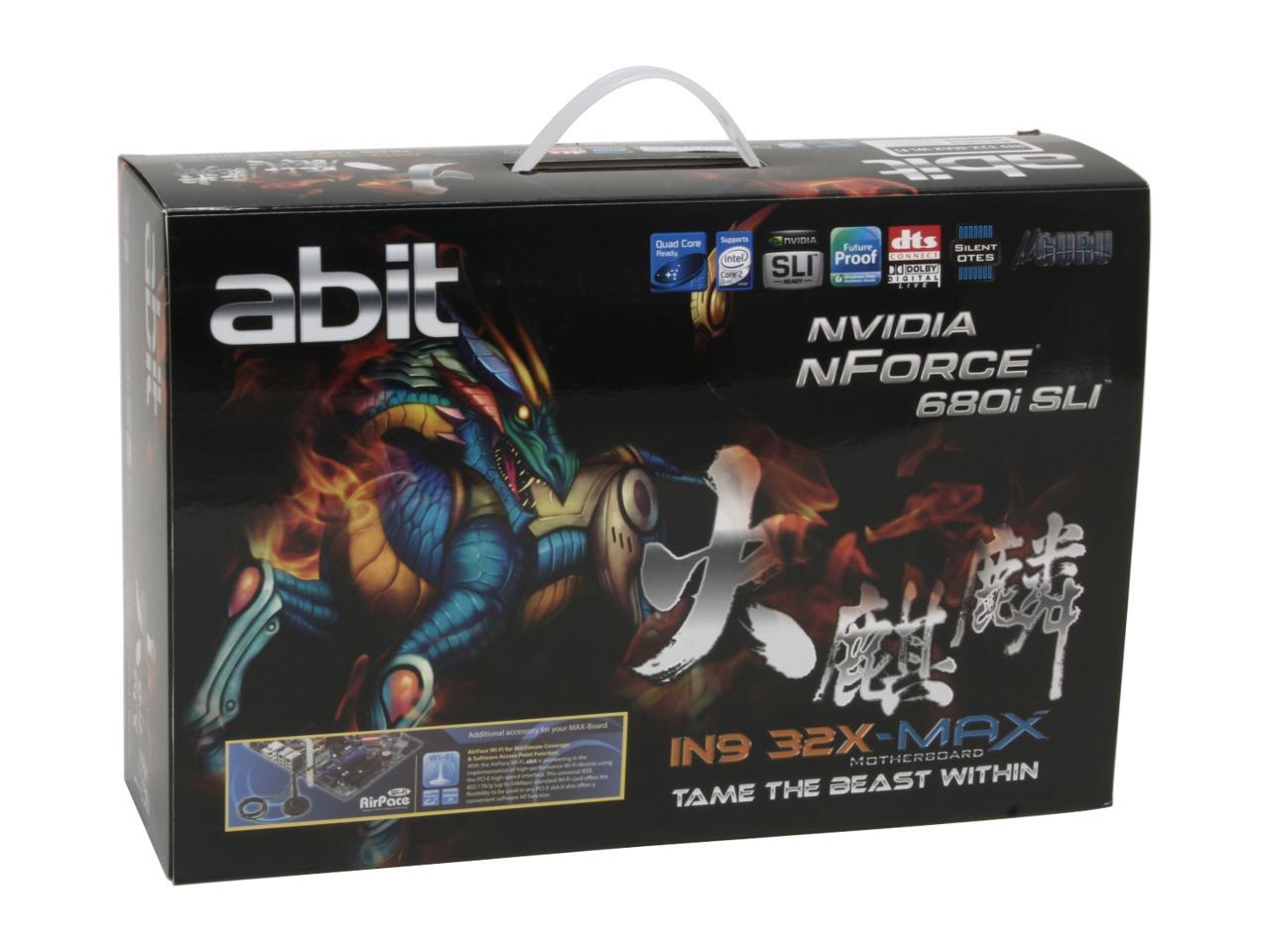 (165) Write a Review
OUT OF STOCK.
Specs
Reviews

Learn more about the Universal abit USA IN9 32X-MAX

Cons: Drivers are buggy. Included disk has no Vista drivers. Abit provides them on their website. The nForce SATA driver for Vista 32 locks the system up all the time. Had to use the nVidia 590 SATA driver from Vista. Came with BIOS 1.0. Need at least 1.2 to run a stable system. Why can't the boards be shipped with this BIOS? Was a pain to install.

Pros: Great mobo! Roomy, well laid out and high quality components. Shipping BIOS 1.0 is a little twitchy when OC'ing; should improve with next release. Running two 8800GTS in Sli and fit perfectly in my Lian-Li V1100 - but check to make sure you'll have the space in yours. Award BIOS extensive like DFI and ASUS.

Cons: Down load 680i chipset drivers from nVidia! Don't use the ones on the included CD. If you OC, get a 40x40x10 NB fan (recommend SilenX. Also, besure you have a top quality Power Supply and memory to avoid problems!

Overall Review: Take your time with your build and do your homework, and you will be rewarded. My CD does have the Vista and the XP Drivers (Use explore CD to find the folder, don't click on the drivers menu to find them.

Pros: This was a great price and promotion when I bought the board, it was really hard to pass up the rebate and price offered by Newegg. For the most part assembly and installation was straight forward, my computer case has plenty of room for the SATA and IDE ports coming in off the side. The processor, memory, sound, LAN all clicked right along (load the drivers FIRST). Runs cool, however I am not really loading it up right now. dual core processor.

Cons: The original BIOS loaded in the board is useless, and no the CMOS reset jumper really isn’t close to the battery. I could not get into the BIOS setup at all until I got the OS booted up and was able to load the provided ABIT flash menu, this was easier than making a BIOS flash disk (I thought). Doing it this way I had to reset the BIOS every power cycle until version 13 was loaded, the computer comes with an external BIOS reset switch, maybe they knew something? Bios version 13 second page doesn’t work with the USB keyboard on the second page (boot from CD option) messing with the peripheral setting for the USB keyboard made it worse, would take a couple minutes to boot, so until I was done I just used a PS2 keyboard. uGuru kind of works, if I change the “mode” option, it will lock up the computer, so I don’t touch it.(windows XP SP2). Won’t work with media center.

Overall Review: An additional USB/FP-1394 plate comes with the mb that isn’t labeled, there are no instructions with it, and the hint for new builders is at least they are color coded, the other two ports that don’t look like USB are the1394 and plug into those pins unless you have a tower with an actual front panel. ATX4P1 power source, tired to use it to power a fan, I don’t know how it turns on. It was easier to just replace the jumper with the three pin, those are available all over. Board layout is average, the bottom is pretty busy with a board in the bottom PCI slot, the fan power, 1394, USB, FDD, pwr/hdd/rst make it busy. IDE and SATA off the side of the board may give other cases a tight fit. Two LAN and a WAN card, a little overkill. It was a great price, I would buy it again despite all of the issues, thanks to Newegg review I knew most of the problems going in.

Pros: Very easy to put together, worked right out of the box with my Q6600 and has no issues with overclocking.

Cons: None so far. Did not like me trying to reverse the OC I had set.

Overall Review: Make sure to download the newest bios, much more stable. This board is great. I think it was designed originally as a server board. Nice to have the ability to use up to 32gb of ram. Currently at 4 with thoughts of going to 8.

Pros: So many features, 680i, great overclocker, stable, easy to work with.

Cons: Heatsinks get pretty hot. I even slapped a 40mm fan on the NB with the provided clips and I still can't hold my finger on any one of the three heatsinks for more than a couple seconds. Might have to water cool those items too.

Overall Review: Great board. I don't see why any one bad mouths it. Overclocks well, and I find it very stable. I upgraded to the latest BIOS as soon as I booted it up and cleared the CMOS. Hasn't even hiccuped sense. You will not be disappointed as long as you make sure it's done right.

Pros: This board has everything. At least, when it comes to 680i chipset boards it does. I went Intel/nVidia for the first time and choose this board for two reasons. Previous experience with abit mbds, and a killer rebate on newegg. I did a lot of research as I was buying it and decided I was technical enough to "Tame the Beast."

Cons: This thing is a fickle beast. Just when you think you have a solid tune in place it'll change it's mind on you. It also does not have the best mounting for it's silent heatpipe setup. Buy a fan for the north bridge when you buy the board, and before mounting it search for insructions on dropping the heat pads for Arctic Silver 5 on NB & SB as well as modding the PWM heat pads. I'd almost suggest looking into a fan for the SB as well, but I think the latest BIOS will alleviate anything that may have been happening there.

Overall Review: I just installed the latest 1.4b4 beta BIOS and I am already happy. I think I have a baseline Q6600 3Ghz stable already (had trouble getting past 2.8 on BIOS 1.3). I also did a "Windows Experience" upon first install before tweaking for a baseline. After the BIOS upgrade and returning to defaults my baseline jumped from 5.4 to 5.6 - just from a BIOS upgrade. OC is also working better, and I think the 4 sticks of RAM are getting easier to work with as well.

Pros: Very good board over all, installed with no problem, quit and fast…

Cons: Need to update the bios before you can install OS on SATA HD

Pros: Good accessories, eSata onboard, 3 PCIe, very cool light effects all around the board.

Cons: Can't overclock quad cores for beans. The BIOS was very annoying with it giving me constant CPU has changed errors. Very bad voltage control, CPU-Z was reporting my voltage at 1.5v-2.00v on my q6600. And the copper also felt felt very cheap.