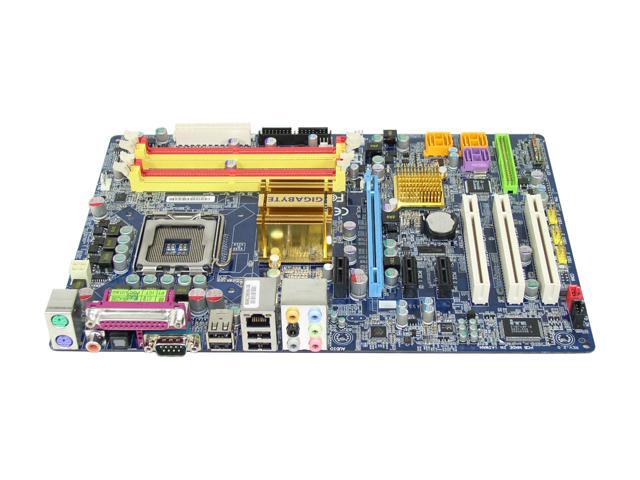 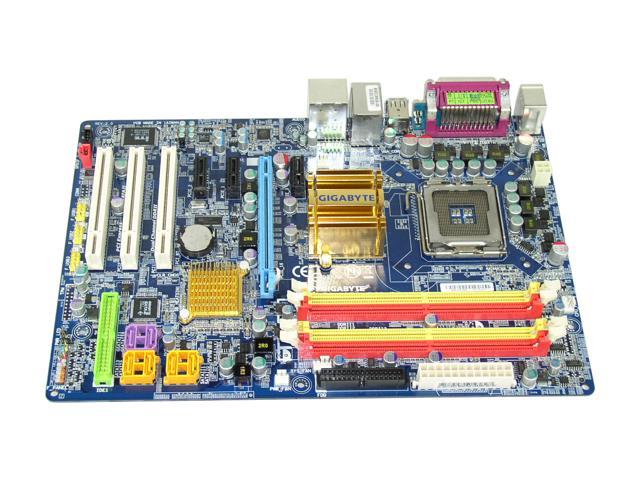 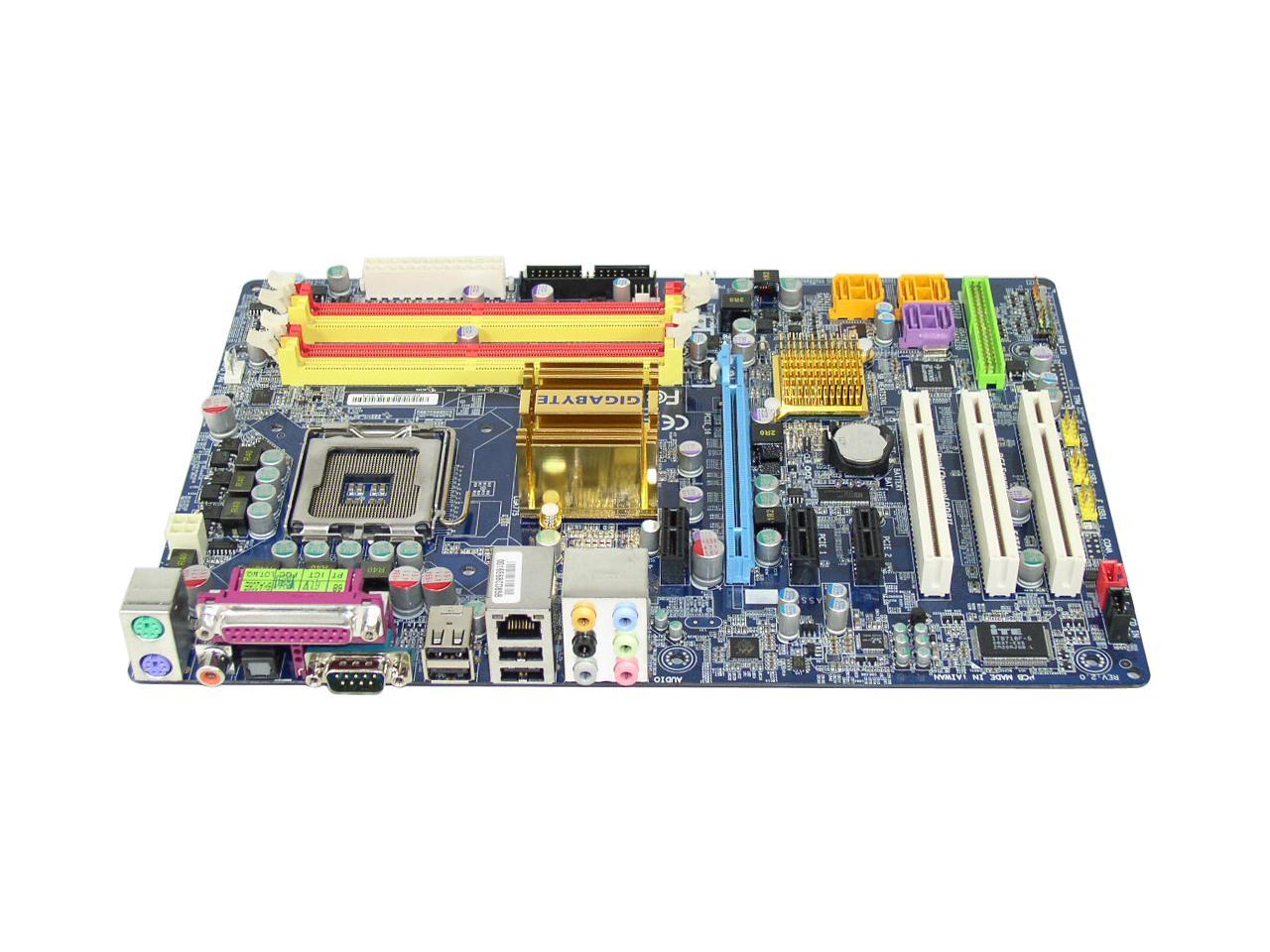 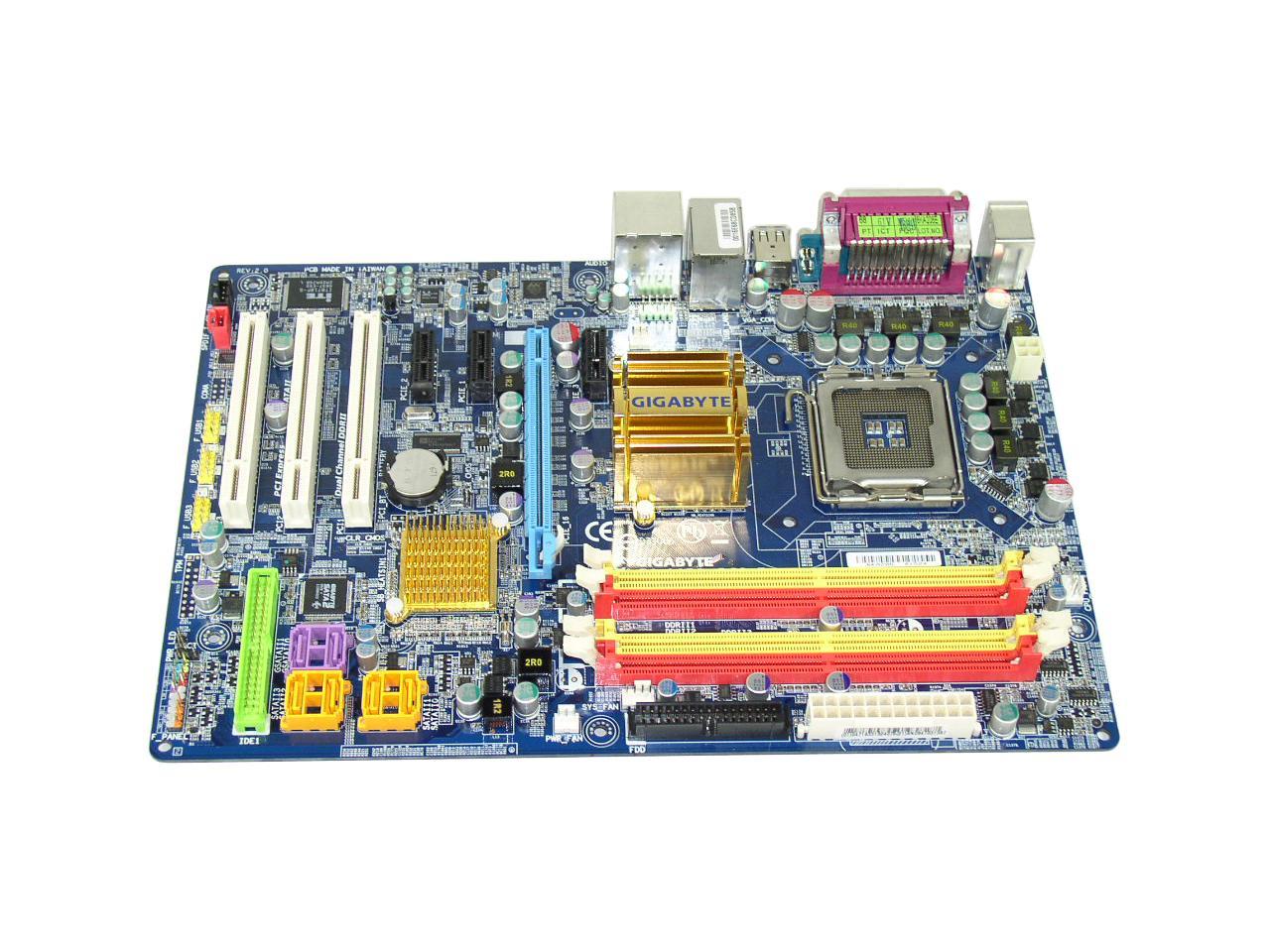 (793) Write a Review
OUT OF STOCK.
Overview
Specs
Reviews
Supporting the next-generation Intel Core 2 Duo and Core 2 Extreme processors, the GIGABYTE GA-965P-DS3 motherboard delivers high performance and a complete arsenal of great tuning tools for DIY and power users to customize system performance to incredible heights. This platform is specifically designed for enhanced system durability and boosted system stability under the most extreme conditions. Filling the mainstream segment for the new chipset, this board sports a highly-overclockable configuration.
Following their new S-series motherboard lineup, Gigabyte actually has two versions of the board, which you can identify by its naming suffix. There is the regular 'S3' and this Durability Enhanced 'DS3' model that is in all essence exactly the same board except that it sports the new All-Solid Capacitor design. This exquisite motherboard utilizes the latest Intel P965 chipset to deliver up to 8 GB dual-channel DDR2 800/667/533 memory with Fast Memory Access technology for maximum platform performance. Other features include 6 SATA 3Gb/s connectors, 8-channel onboard HD Audio and PCIe Gigabit LAN support.

Learn more about the GIGABYTE GA-965P-DS3

Pros: Received a Revision 3.3 The issues surrounding D9 memory chips are gone. No boot problems. Running an e6600 at stock voltage at 3.2 GHz The board cmae with BIOS rev F9. I did flash to the new F10.

Cons: The CMOS reset pegs doesn't come with a jumper block, also if you have a large video card the jumper is blocked by it. slight pain.

Pros: After reading many reviews and comparing the different features and overclocking ablities of different boards I choose this one. This is a fantastic motherboard. My goal was to build a system that was fast, quiet, flexible and easy to overclock. This motherboard allowed me to do all of that. I am currently running my e6400 C2D whisper quiet at a stable 3.5 gHz with just air cooling from the Artic Cooling Freezer 7 Pro!!!

Overall Review: This is the first system I built in 5 years and it runs fabulous. I could not be happier. My sytems specs are as follows: Cooler Master Centurion 5 Case, Thermaltake W0101RU 550W Power Supply, Gigabye GA-965P-DS3 rev. 2, C2D e6400 overclocked and stable at 3.5 gHz!!!, 2GB Corsair XMS2 DDR2 PC26400 (4-4-4-12), Artic Cooling freezer 7 Pro, 2 WD Caviar SE16 WD2500ks 250GB SATA Hard drives in Raid 0, Lite-On 20x DVDR DVD burner, and an EVGA 8800GTS video card that fits in the Cooler Master Centurion case with no problems. I cannot hear this system running whether at idle or under full load while playing games such as Fear or Dark Massiah.

Cons: Note: Memory can be deceptively incompatible. Booted, loaded windows with 2 gigs of GSkill HZ with default 1.8 volts, but had to be manually adjusted to 2.1 volts (+0.3) to get BIOS flashing to work (BIOS flash would fail with no explanation on read, yet RAM tests ran fine). Bad positioning for audio header. Bad spot for IDE. No firewire, but thats not so bad. BIOS F3 forced CD's to PIO mode when RAID used. Fixed in F4

Pros: The high-end components used on this motherboard and the amazingly flexible bios make overclocking simple and wonderfully stable. Running this with an Intel e4300 at 3.6ghz on stock cooler, 2gb Corsair xms2 extreme ddr2-800, and the OCZ GameXtreme 700watt psu, hit 3ghz on my first boot, let the cpu run in for a week or so, and went right up to 3.6 without a hitch. Be sure to press crtl-f1 from the main bios screen to enable extra features such as memory timings. I can't say enough good things about this board :)

Overall Review: If you want a rock solid mobo, to overclock or not, and you don't need sli, just click add to cart...you won't regret it!

Cons: Only one IDE port means a max of two IDE devices unless you buy an expansion card. Only one graphics port, though that's typical of Possible RAM voltage boot issues (see other thoughts).

Overall Review: This motherboard, out of the box, will only recognize RAM that can run on 1.8 volts. If your RAM does not work at 1.8 volts, you will need to either get different RAM or borrow some that does, change the BIOS to provide more volts, and then put back in your >1.8v RAM. Hopefully a BIOS revision will fix this but I don't think you can flash the bios without already having working RAM :)

Pros: Good overclocker. Clean layout. Solid state capacitors. The Hardware Installation Guidebook is a full-color step-by-step newbie-friendly illustrated guide of how to set up the board. First-time builders can follow this easily. Excellent overclocker. My E6420 has achieved a 3.2 OC at 1.375v and 407 GHz. I'm still stability testing, but I know it's stable at a 2.75. There are also a gazillion guides on overclocking this board. See hardforums, ocforums, forumz.tomshardware.com, etc. There is a CMOS reset jumper. If you hook up your computer restart connection to it, you can easily reset CMOS without much trouble. The BIOS allows you to save "portraits" so you can save different settings. Very nice!

Cons: The documentation could be better. Gigabyte doesn't document their utilities well and the website is filled with broken links--especially links to the more technical documentation. I still have no idea what Xpress Recovery 2 does, except that it is an imaging utility--but why image a drive on the same drive? Or is this a Gigabyte version of Ghost? Who can tell? Also, don't use the EasyTunes for overclocking. The bios is pretty easy enough. To tweak the bios, you need to press Ctrl F1 at the main Bios screen. This is in the manual, but not in screamingly large letters. In other words, while the board is easy enough to set up, and very tweakable once you do, but the Internet is better than Gigabyte as a technical resource.

Overall Review: I had trepidations after I bought this board, but I'm glad I did. This is the 2nd computer I've built and it was smoother than the first. I have a Centurion case, 2 x 1G SuperTalent DDR2 6400 RAM at 4-4-3-8, E6420, Tuniq 120, geForce 8600GTS. Using the guides I found on tech forums, I overclocked easily to 2.75, and am looking at stability testing over 3.2, though I have relaxed timings to 5-5-5-15. I am not running RAID. I had no problems with my IDE optical drive. It works fine. My SATA HD uses the native SATA ports, not the Gigabyte SATA ports. People have had issues with the Gigabyte ones. Intel has discontinued native IDE support with the 965 chipset, so issues with IDE are not Gigabyte's fault. You are stuck with jmicron. Sorry. The board default memory voltage is 1.8. Make sure your RAM will work at 1.8 else you'll need to have cheapo RAM just to boot up to get into the BIOS. If you plan anything other than a mild overclock, get extra cooling for the northbridge.

Cons: Initially this was apparently DOA. System was built on the anti-static bag out of the case (Centurion 5) 'just in case'. Video card is EVGA 8800-GTS 320MB (sweet). Symptoms: initial power up- video cooling fan spun to high speed (hover craft mode apparently) while Tuniq Tower fan was loafing and wouldn't speed up. No POST, no beeps, nada. As noted above the cooling is via the Tuniq Tower. On other forums you'll find that there can be 'issues' with the backplate and that was the problem here. I swapped on the stock cooler, achieved successful post and then replaced the Tuniq Tower but inserted some plastic between the backplate mounting tape and the MBD PCB. NOTE: using Arctic Silver 5 per the website- when I swapped the Tuniq for the stock cooler I DID NOT apply more grease at any time. Coverage was already excellent. Also note I did not "wax the racecar" by lapping the base of the Tuniq Tower and my temps are still low (why bother?)

Overall Review: System has been rock solid stable...and to reward that behaviour I'm going to have a go at reaching 3.6GHz as soon as the family is out of town. Heh. SuperPI, 1M @ 20 seconds. Stock speed was (IIRC) around 30-32 seconds. 32M in 19 minutes. Oh, FYI, the temps are under 50C IN the case. Should note that there was little difference between outside with fans blowing and inside with all case fans running.

Pros: Lots of USB connectors for front panels, extra SATA ports to support 6 drives. EXCEPTIONALLY FRIENDLY overclocking, but not idiot proof, make sure you have at least some idea what you're doing. Was able to push a E6600 (stock 2.4ghz) to 3.3ghz on air stable, and possibly even further down the line. Integrated audio pumps good sound into my simple 2.1 setup. Booted no problem with the DDR800 1.8V @5-5-5 SPD, and the afore mentioned chip.

Cons: While the board has 6 SATA connectors - 4 from the intel controller, 2 from an extra integrated controller - only the extra 2 give you raid options, limiting you to a 2 drive array (0,1,JBOD). That means no raid5, and only one array. If you want either a more complicated RAID, or a second array, you'll need an add-in card like I did. The 4pin power connector placement is seriously inconvenient for a case with a PSU on the bottom design, and connecting the SATA cables is tricky with an extra long GPU, like the 8800 series.

Overall Review: The motherboard has only one PATA port. The 965 chipset also can be picky about RAM voltage on the DDR800 modules, so i'd reccomend the vanilla 1.8v sticks at 5-5-5. These are really shortcomings of any 965 product, so it's hard to con this board for it. The integrated features combined with the 0 complications I've had still make this board worthy of a 5.