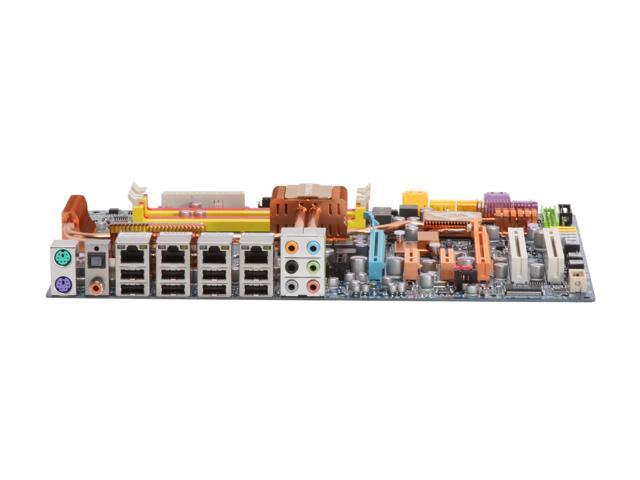 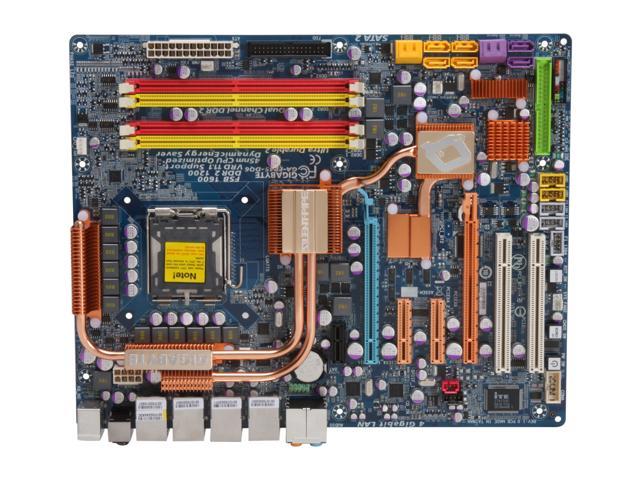 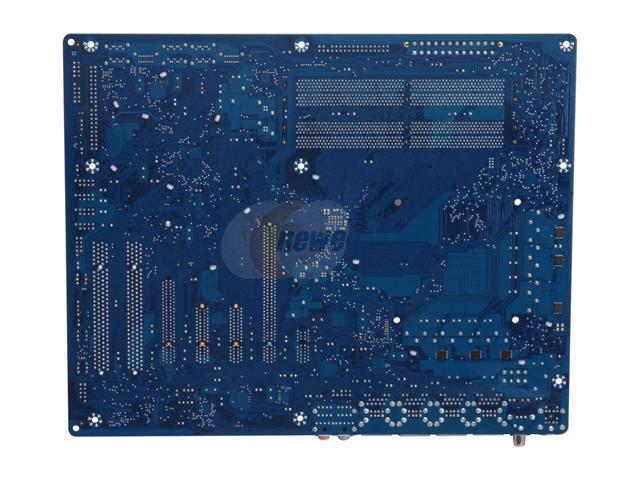 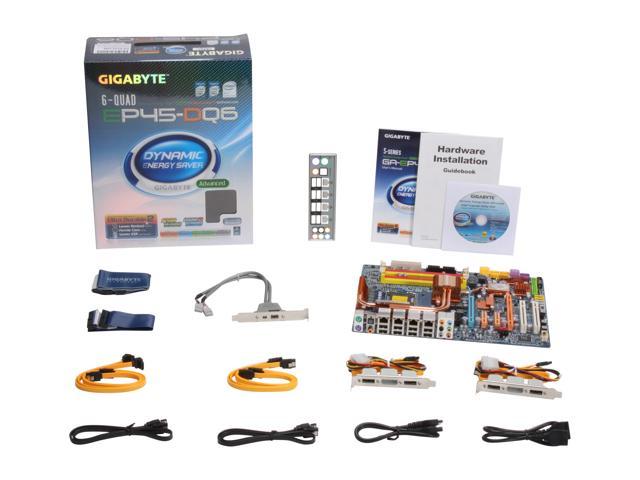 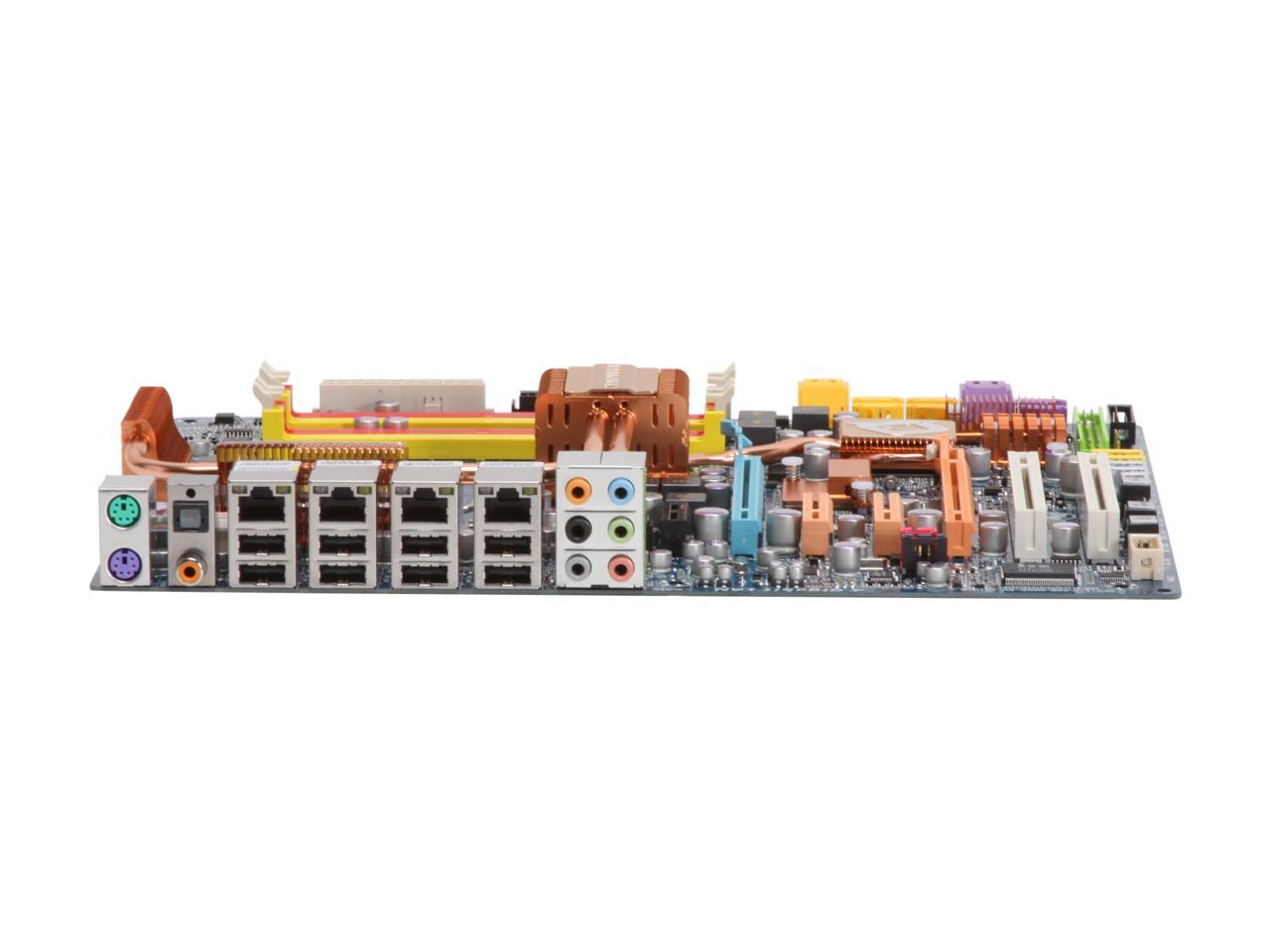 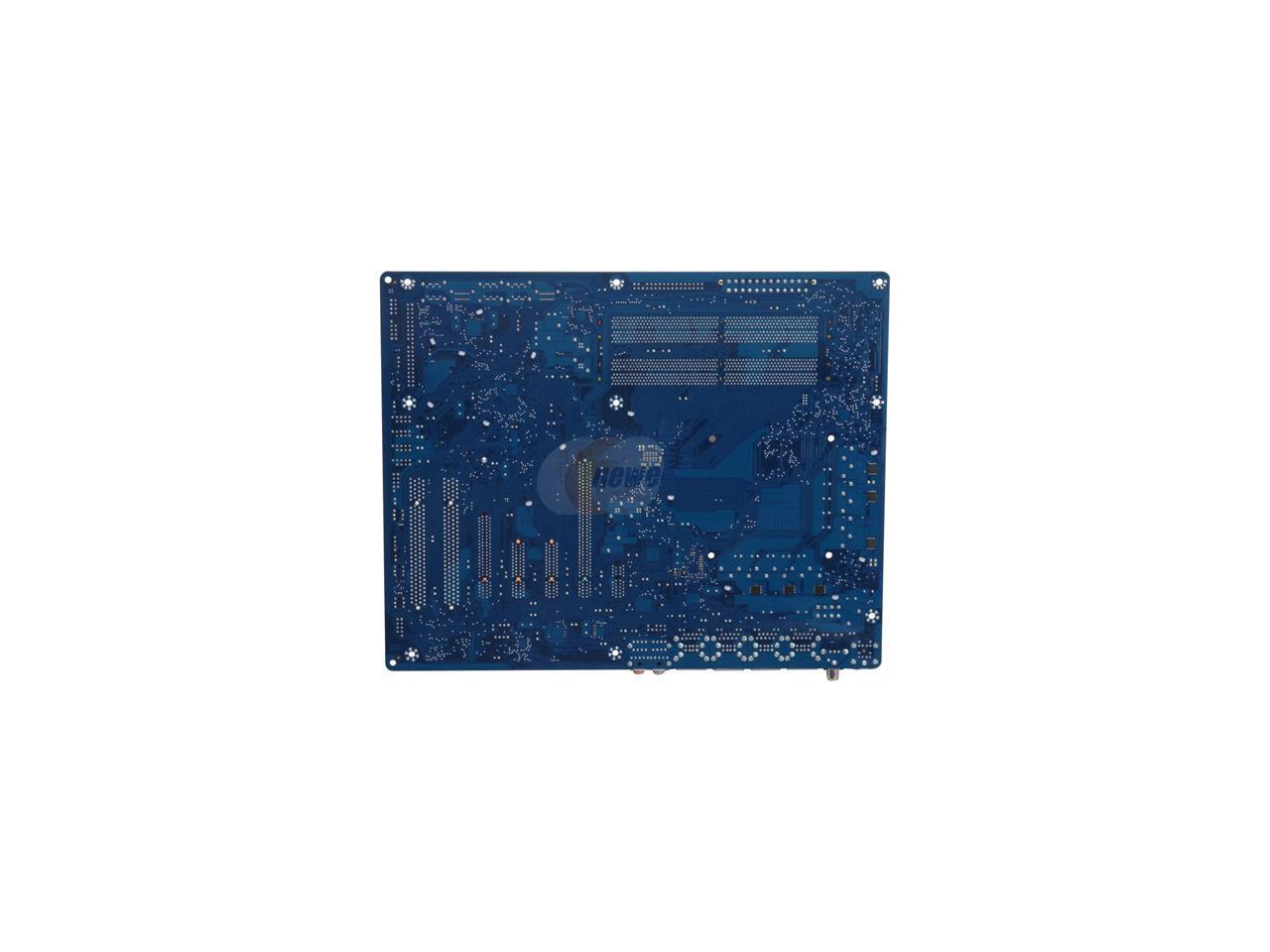 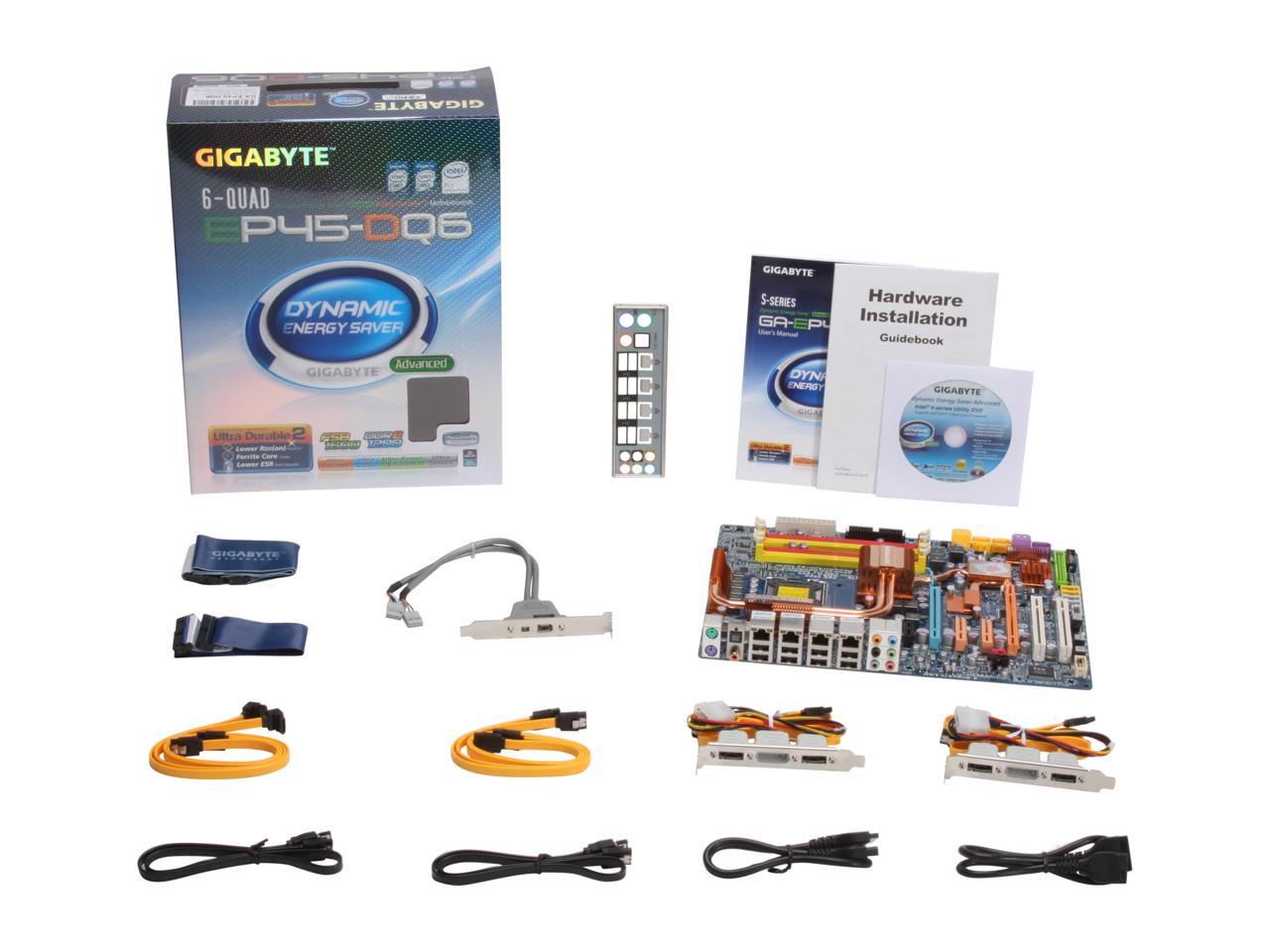 Learn more about the GIGABYTE GA-EP45-DQ6

Pros: Don't get me wrong, this is a great motherboard. I've been using it for over a year without any major problems. I purchased this for my home PC, which doubles as media, FTP, and IIS server. Some of the best features are 10 SATA2 connections, 4 Gb NIC, good onboard audio, two RAID controllers, SLI display (runs in 8x PCI-e), 45nm CPU support, eSATA adapters, loads of USB, firewire adapter, and fast FSB. I am running Q6600, 4 GB OCZ 1066, nVidia 8800 GT. I really like the 4x NIC. I have one connect setup as crossover directly connected to my Popcorn Hour media device. Two connections are teamed for primary internet use, and the last NIC is setup for my server connections (FTP, remote access, my wireless Popcorn Hour).

Cons: Gigabyte support isn't very useful. I contacted Gigabyte to verify that hardware configuration before purchases more hard drives, but the information they provided was incorrect. Specifically Liu (or Lio) from Gigabyte US support told me that the SiI5723 RAID controller supported standalone SATA drives, and could support the boot volume, but neither statements are true. I ended up investing $500-$600 in hard drives for specific configurations that I could not implement. I wanted my primary volume with Windows on the SiI5723 controller using a 10,000 RPM 74 GB Raptor, and 6x 500 GB drives in RAID 5 as the secondary volume, but I could not. The boot volume must be on the Intel ICH10R controller. Also, the SiI5723 only supports RAID 0/1 configurations. I can't believe Gigabyte gave me incorrect information. The technician obviously did not understand the product fully and made up an answer. Disappointed in some ways.

Overall Review: I was able to get my computer configured in an acceptable way. RAID 5 (5x 500GB) and 10,000 RPM 74 GB Raptor on the Intel ICH10R chipset. The Raptor drive is the primary OS. Very expensive. I wouldn't recommend this motherboard to gamers, unless you want to run RAID configurations, although complex RAIDs aren't meant for gaming, which is why my primary OS is on a separate volume. Very feature rich-board, and I gave a 4/5 for the RAID and support problems I encountered.

Pros: I bought this MoBo to run an EFI-X OS X configuration. The system is rock-solid stable. Installation was a breeze. I love the fact that this MoBo has reset & power buttons internally on the board. Great for troubleshooting.

Pros: Excellent functionality, very easy to configure and setup. Great layout, Energy saver functions are very interesting to play with and actually work. The dual bios has been a saving grace during installation and test of different functional setups. Ethernet teaming is really good. The BIOS has a lot of functionality that requires carefull read of the manual-which we all do!!!. I have the DVD player as the only IDE device and it works just fine. The hardware raid processors are a real treat for e-sata smart back-ups. Very stable board with Bios F5 (original), Q9450 quad core and 4GB Corsair memory.

Overall Review: Setting the RAID drivers on an existing configured VISTA system is a real challenge and a somewhat complex process using the Intel Matrix ICH 10R but it can be done by conecting the system disk and booting in safe mode on the SiI5723 devices and manually updating the all raid drivers. After that you move (i.e. partition copy)and/or connect the system to the standard intel ICH-10R. Voila. On a clean system it's a breeze, just put the required drivers on a USB during initial setup. 4 GB ethernet port is an over-kill.

Pros: I am using this motherboard in a MythTV backend / file server / media renderer and it absolutely rocks. With all the PCIe slots, this certainly provides more than enough interfaces for DTV capture cards and SATA raid expansion... that is, if I manage to use up all 10 of the on-board SATA. The hardware raid 1 "Smart Backup" feature is amazing -- the hardware totally maintains the mirror image drive, without any involvement from software.

Cons: The CPU cooling pipe blocks the PCIe x1 slot -- only very short cards will fit in that slot. The only card I could find that fits here is the Hauppauge HVR-1250 ATSC/QAM/NTSC capture card, which isn't a real problem for me since I had intended to use one of those cards in this system, anyway. I can fit larger PCIe x1 cards in the two x4 slots without a problem, so this isn't a show-stopper, but I would like to keep one of the x4 slots available in case I want to add more SATA raid in the future. The PCIe x8 slot does not recognize my x1 dtv capture cards. That annoys me. I haven't experimented enough with this yet, but maybe a BIOS update or tweak might change that..... but I doubt that.

Overall Review: Despite the limited length of the cards that will fit in the PCIe x1 slot, and the fact that both the PCIe x16 and PCIe x8 slots seem to be dedicated for graphics boards (or x8 / x16 boards) , only........ I still would recommend this motherboard to anybody looking to build a media server or video editing workstation that needs to support a large amount of storage and expansion. I think that the 4GigE is a bit overkill, but overkill doesn't hurt. This may be more useful for me in the future. This motherboard seems to be future-proof for quite some time.

Pros: Dual Bios, Easy overclocker, lots of features, easy bios upgrade, very stable. Raid works well and I have no problems with this board.

Cons: If you plan to crossfire in X16 X2 or even X16 X1 and X8 X1 this board can only X8 X2. Do not turn on overclocking to automatic (turbo etc) in the software or the bios as it may lock up the system if the components such as memory or CPU don't allow these settings. The reboot frenzy may also be due to improper setup of bios.

Overall Review: Great workstation board, bios recovers to last good setting or can be reset if overclocking by the push of a button. I was very patient and did not turn on all options at once in the bios and have a Q6600 running stable and cool at 3.0 GHz with a Xigmatek black night at full load and 65 C.

Cons: if you are you missing any components from the motherboard try calling their (Gibabyte) customer service you might need to give them you SS# before they will belive you. very bad

Overall Review: I have experienced bad customer service from Gigabyte.

Pros: Working very stable. no problems at all

Cons: Windows 7 not fully supported. gigabyte website says it win7 certified. yes, win 7 installed without problems but.. TPM not working under Win 7 Etherner port teaming not working too. I am not sure about other gigabyte utilitys. thay may not compartible with win 7 too. overall rating bad - because of no win 7 support asus, msi - continue support P45 motherboards.

Pros: Many useful features like Qflash (flash BIOS from USB stick) and dual BIOS. All heat piped and tons of USB ports. Works very well with OS X. Useful clear BIOS, reset, shutdown buttons right on the board - excellent feature when setting the system up.

Cons: The lan chipset drivers are not listed on the Gigabyte site for this board for some reason, so you have to go to Realtek and get 8111C drivers from there.