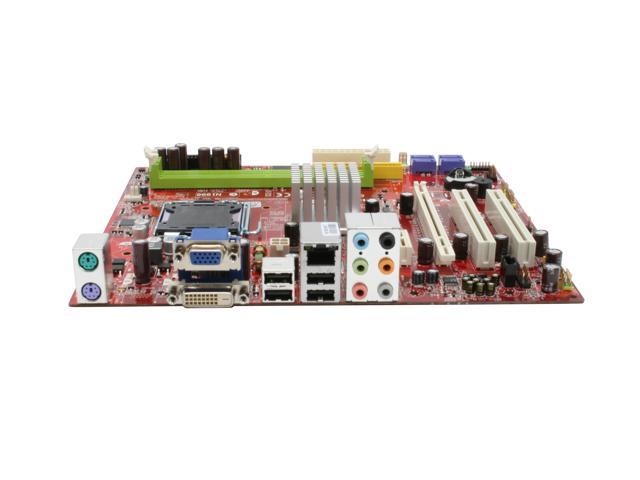 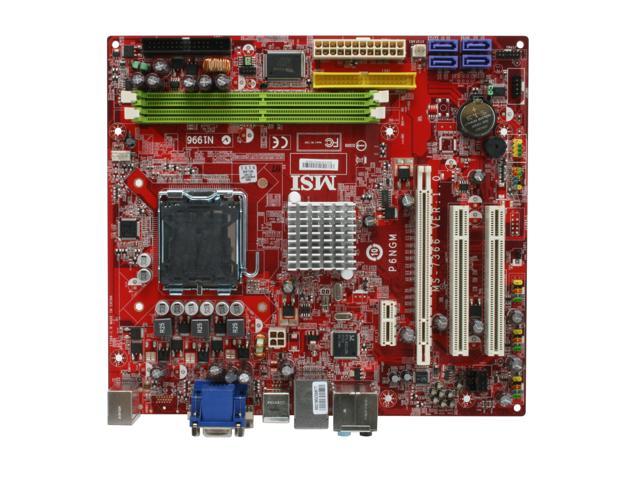 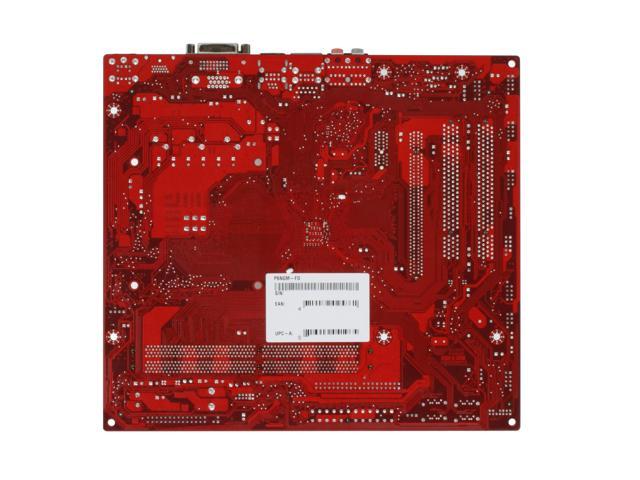 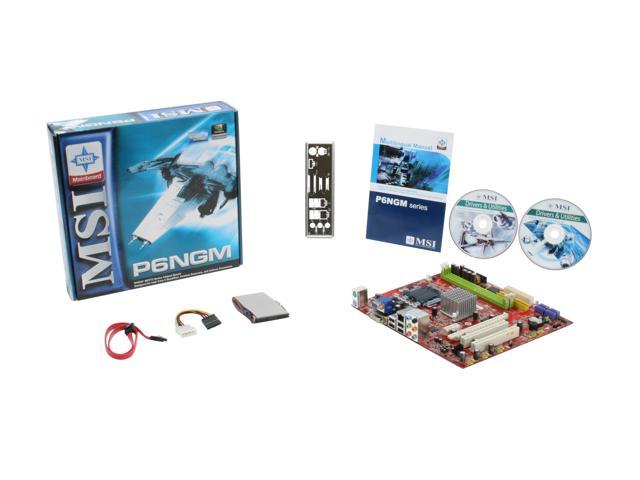 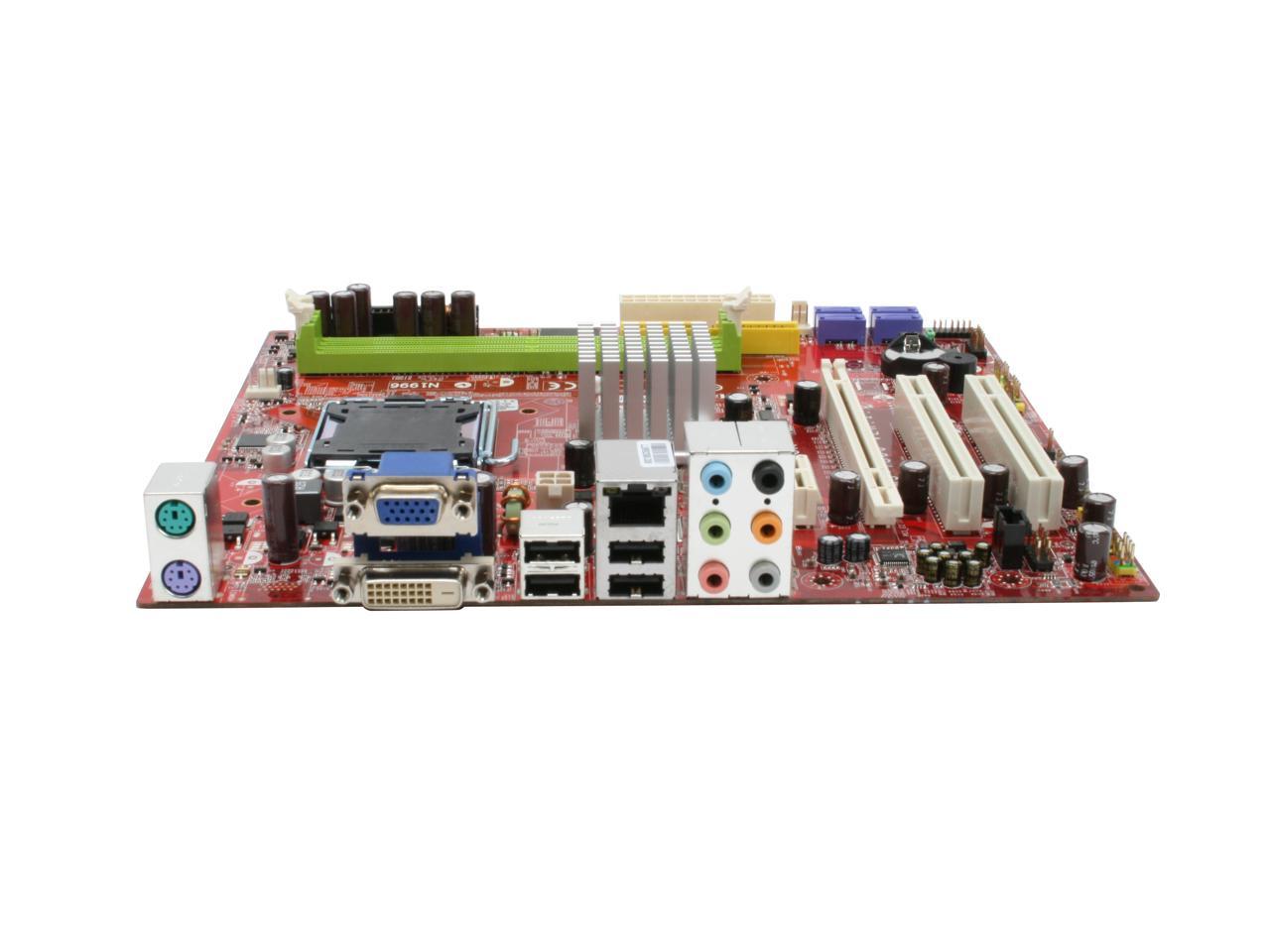 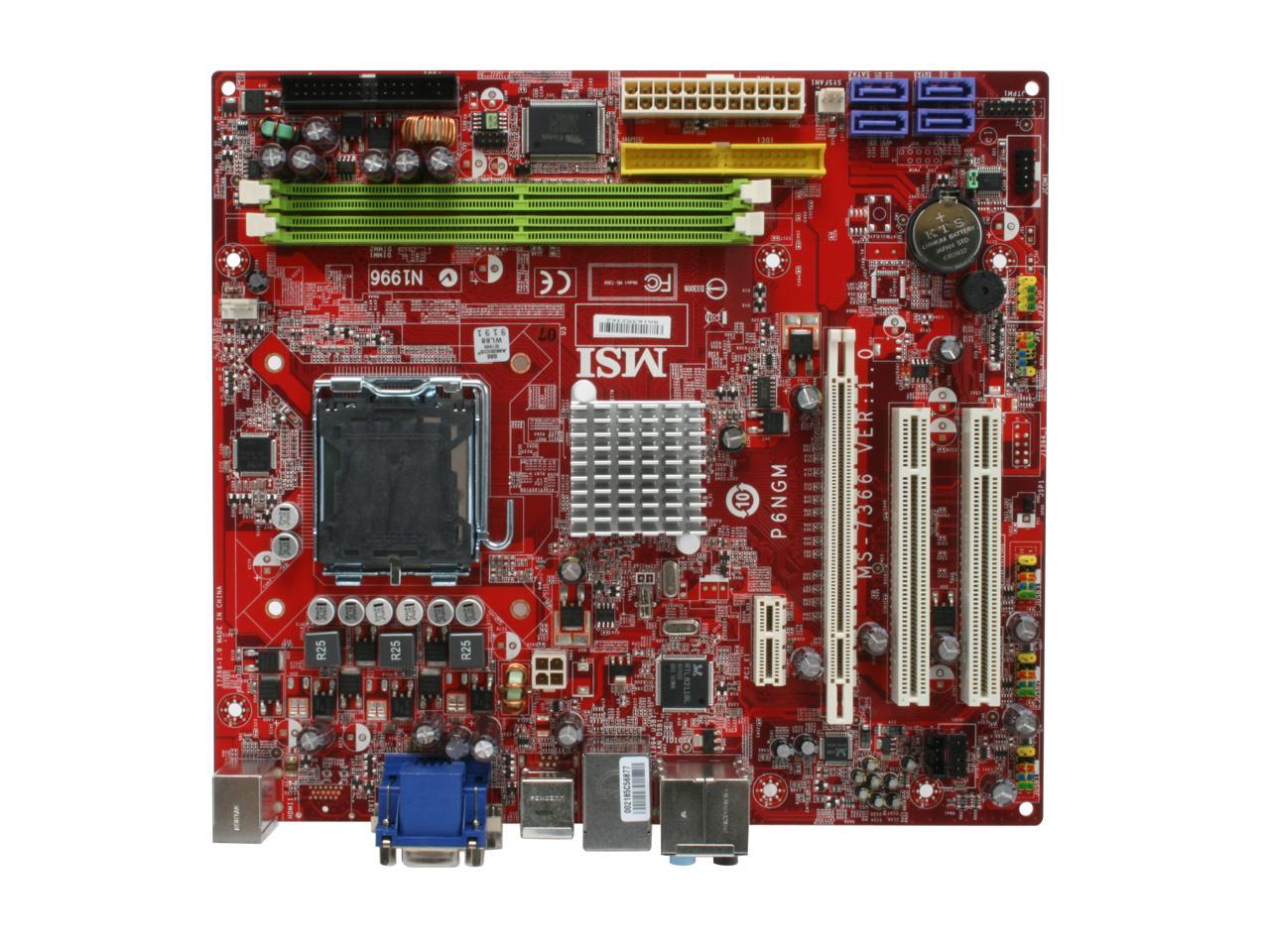 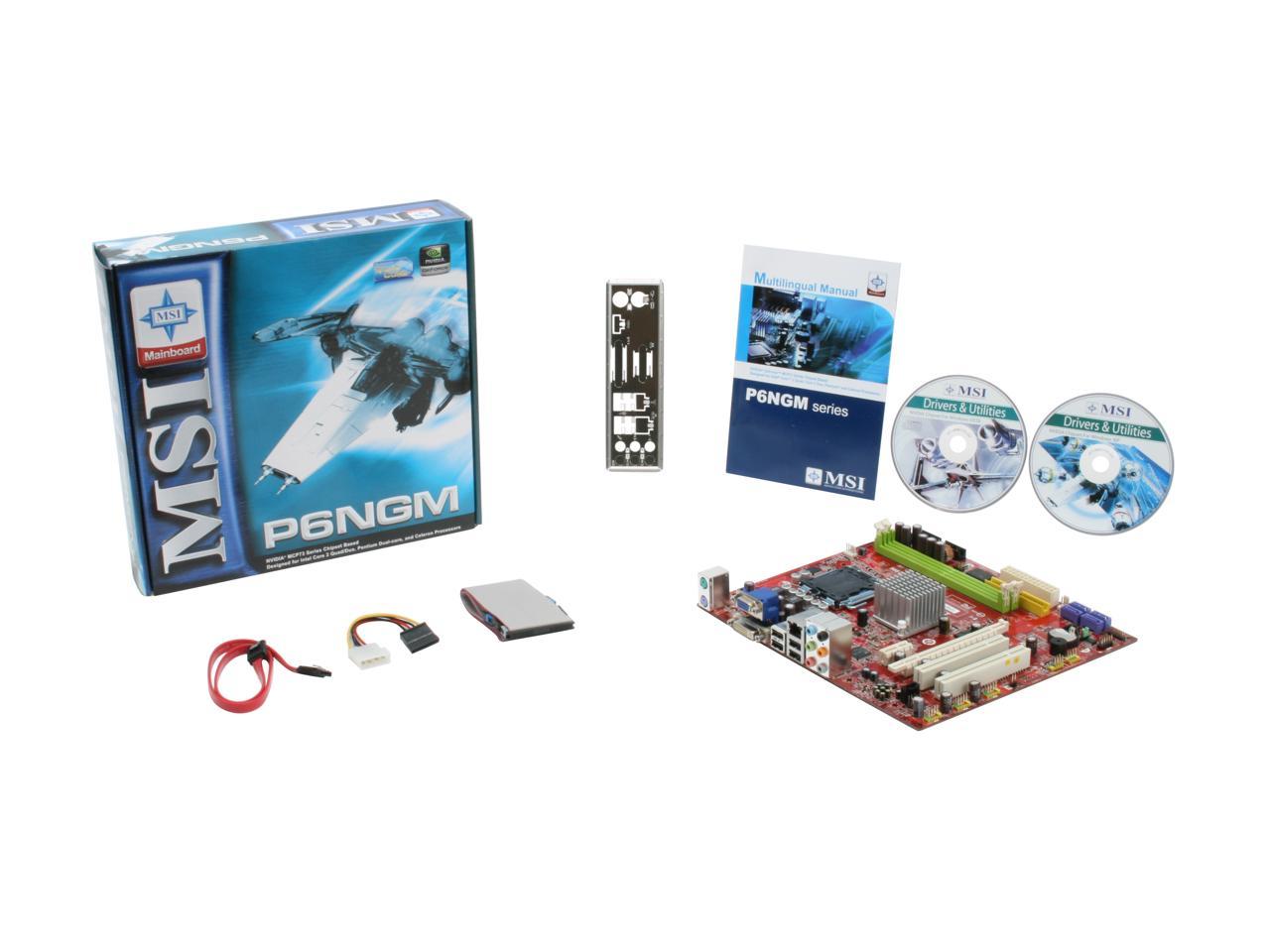 Learn more about the MSI P6NGM-FD

Pros: Love the price. The board is very user friendly and easy to setup. DDR2-800 is a +. VGA/DVI options! Great audio. Works great with Vista x32 Home Premium.

Cons: The only drawback I had was that I bought 2GB (2x1GB) of Kingston ValueRam DDR2-800 memory from the QVL for this board and it did not boot with 2GB installed. It would boot with 1GB. I was able to up the voltage to 2.0v and it booted fine with the 2GB and rock solid. So you may want to know this if you're a noob putting this together.

Overall Review: Excellent performance/value for this board at this price point. Love the option of VGA or DVI!

Pros: small size everything is clearly labeled easy to set up onboard video is kool for everyday use and if your not a serious gamer. no problems yet will get a card later if i need it. also it can use A-data memory (not a listed brand on on msi site) it work no problems yet

Cons: bummer only holds 4 gigs of memory (newegg says 8 gigs) plus no onboard 1394/firewire there is a place that is labeled 1394 but no pins so you need to buy a pci card if you need firewire also the user guide page 2-16 shows a 1394 optional bracket but one end looks like you need pins to hook it to the mother board . so i dont know how that would help

Overall Review: small size fits nicely in to a X Q-pack 2 case (apevia) with extra room i have the red one so the red mb looks kool (wish it didnt have green memory slots) everything in my case is red, i'm doing a FMA casemod (i love edward elric) so it has red led fans, red heatsinks, red fireflies, uv red sata cables, red leds in my power supply and red cat tubes had problems with intel's push pins dont kow if it was the boards, mine or intels but it took 10 pins to get the heat sink on first time thats ever happened to me it was a pain to find replacement pins

Pros: This is one of my favorite mobo's. I've built several systems using this model. I like the built in DVI, memory upgradeable to 8GB's using the new 4GB sticks and the Gigabit LAN. Usually a very stable motherboard.

Cons: The last one I received was defective from the start. It would freeze (lockup) even when in the bios. Tried another mobo that was exactly the same model and it was fine. Bound to get a defective one once in a while I guess. That's why I rated it a 4 instead of a 5.

Overall Review: As always Newegg is fast in shipping and great at replacing defective parts under warranty.

Pros: I paired this board with a Pentium dual-core E2200, 4GB of GSkill DDR2 800 RAM, and two 320GB SATA hard disks (RAID1) to use as a basic server, so the quality of the onboard video/audio was a non-issue for me. The board is well laid out, and the features are excellent for a basic system. Took less than 15 minutes for me to get this assembled and booted. Contrary to previous reviews, I have had zero lock-up issues with this board. BIOS is version 2.1, I believe.

Cons: Single-channel memory is a bummer, but that hasn't drastically impacted performance yet. Front panel connectors were a bit odd because the pinout order was inverted between the two sets. Documentation is very skimpy.

Overall Review: I'm running Ubuntu 8.04 LTS on this system, so I don't know if that has any impact on my lack of lock-up issues thus far.

Pros: I read an earlier note about an e8400 install and you need to flash the bios to 2.1 for that cpu. The video is great for everyday use. But if you want gaming video buy a 1.0 pcie screamer card for that. Have a 2160 for my daughter with this and will upgrade to a core to quad later since she does lots of art. I will also upgrade her video at the same time. Easy to install board and all in all solid with both xpsp2 and vista 64 bit sp1. The wd 320 drive only gets the full partition under 64 bit vista business.

Cons: DDR memory controller blue screens corsair ram past 1 gb. I will be trying the voltage solutions from an earlier post to see if this corrects. MSI should have corrected this in the bios for the auto settings on the ram. For this I give 4 instead of 5 stars.

Overall Review: Always keep the bios up to date if you are upgrading processors. Make sure you confirm with the MSI website if your cpu will work before laying down your cash. If you use sp1 for vista and disable UAC xp pro is no longer worth keeping. This board does better with Vista.

Pros: It works well enough with my Pentium D 925. The installation was easy. The manual lists off all of the connections well.

Cons: The BIOS features aren't explained very well. The overclocking program doesn't work. The onboard VGA is not good enough for many games to run at 30 fps. The memory is single-channel.

Overall Review: I updated the BIOS to 2.1 and tried to pop in the Wolfdale Core 2 Duo E8400. It gave blue screens. It works well enough for your average stuff, but if you want more power, find a better board.

Pros: Good price. Audio sounds very nice. Supports the latest processors. Despite there being no dual channel, I'm getting good performance with an e6750, 8800gt, and 2 gigs of G.Skill DDR2 800.

Cons: Lack of overclocking options - no option to change vcore or northbridge voltages, which means your OC'ing will be very limited. Memory voltage only goes up to 2.00v. No dual channel. You'll have to clear your CMOS old school if you really do want to overclock, theres no button like on the P6N.

Overall Review: I bought this after frying my ASUS mobo installing a new heatsink, I didn't want to spend a bunch. I'm satisfied.

Pros: I appreciate a quad core mobo that is micro ATX! The DVI-out has HDCP support, so watching HD-DVD/BD is a go. The layout is OK, wish USB headers were closer to the front. All headers clearly labeled. Very cheap but works as advertised. Not an enthusiast/workstation board, but perfect for stock applications. 4 SATA connections with many RAID options a plus.

Cons: Does NOT support newer upcoming 45nm Penryn Quad CPU, however Kentsfield Quad OK (perhaps upcoming BIOS revision will fix that). As stated before, only 2 fan headers, and single channel only (not a deal breaker though). 15 pin VGA connector isn't secure, wobbles.

Overall Review: I installed chipset drivers fine, and then XP SP3 RC immediately before installing other drivers. Google for KB835221.EXE (MS hotfix) and install after Service Pack 3 so that your Realtek sound driver works. ALC888 is actually pretty decent for onboard! I will hesitantly try out Vista later, but for now sticking with x32 XP.