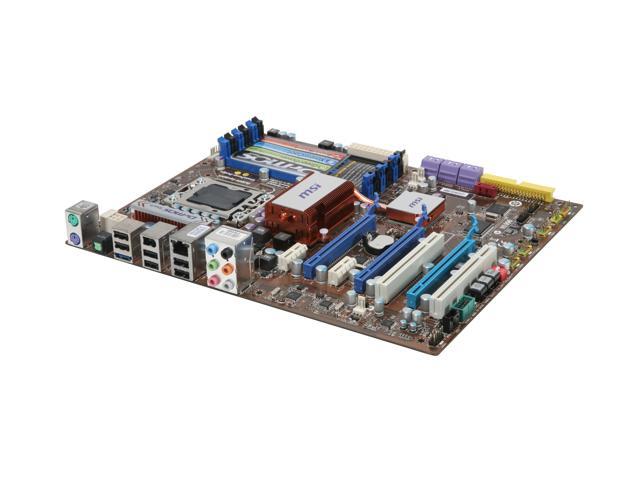 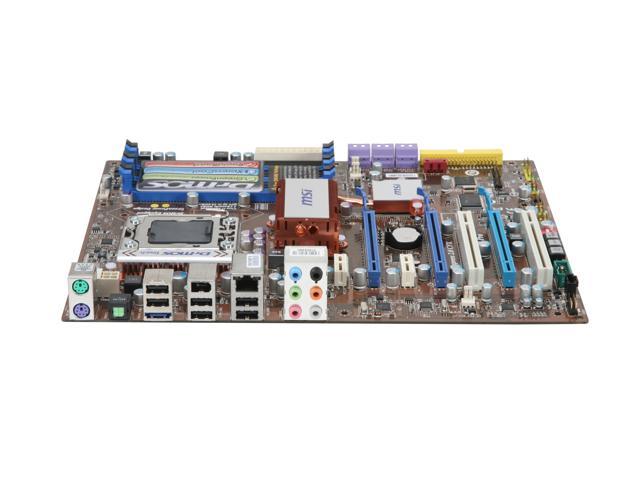 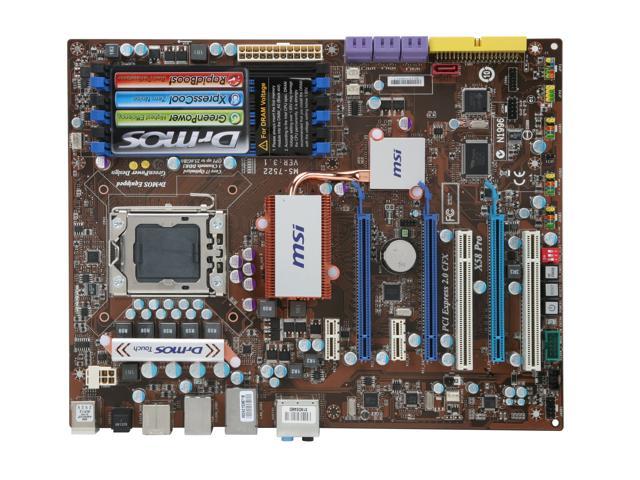 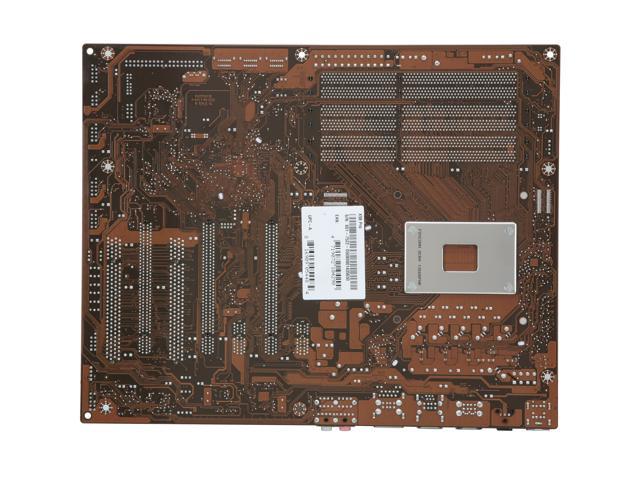 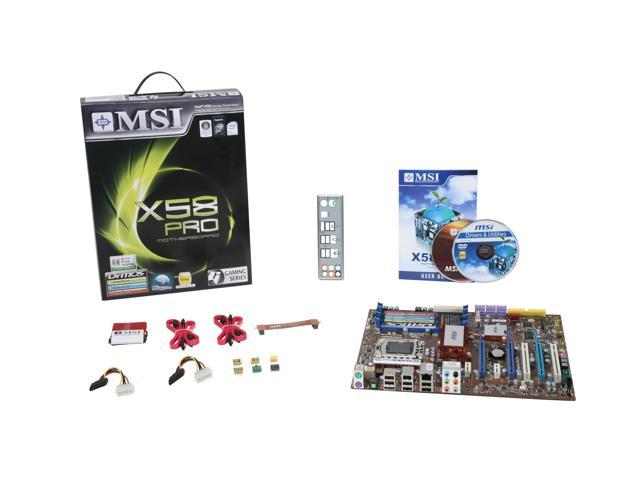 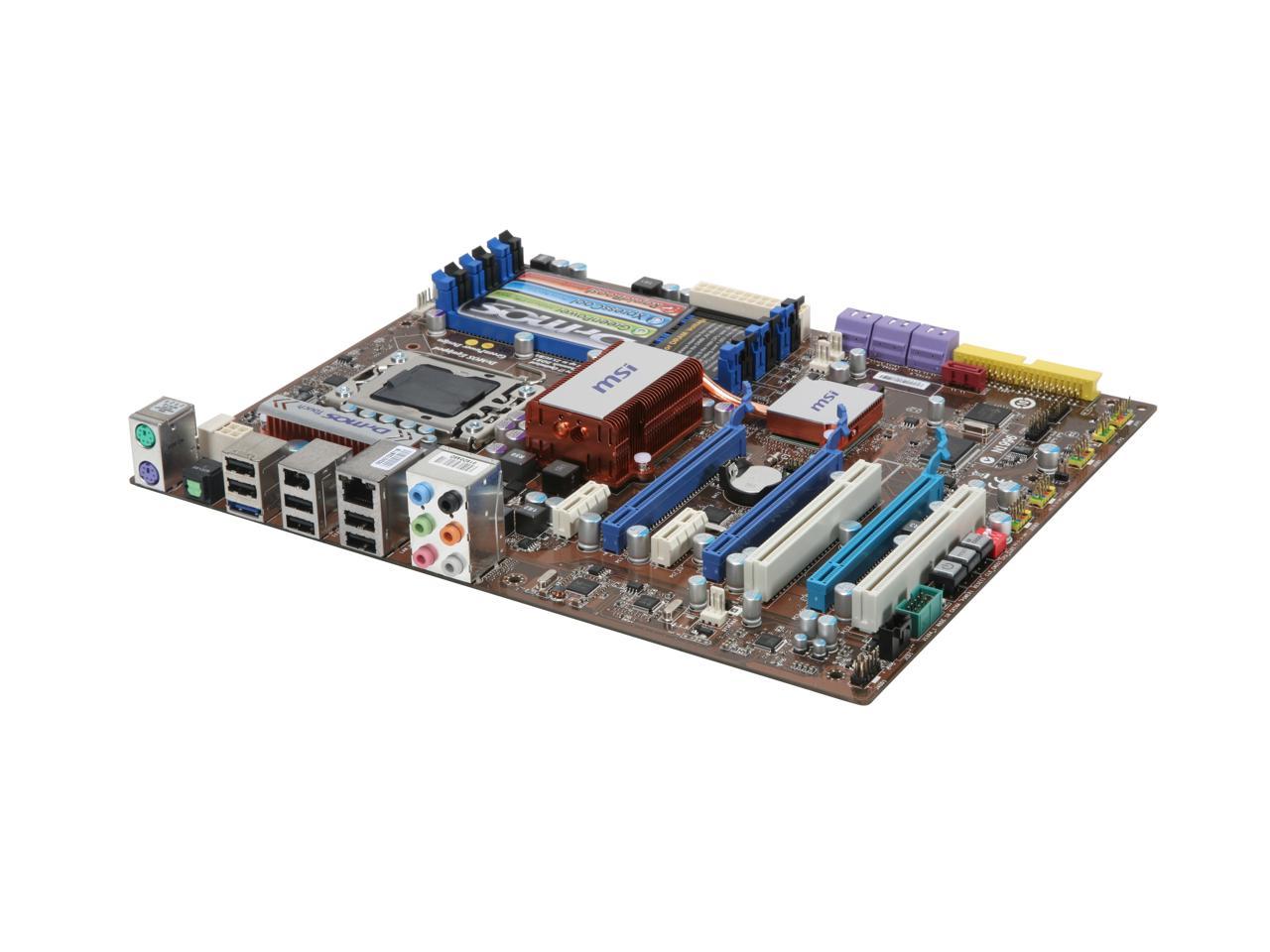 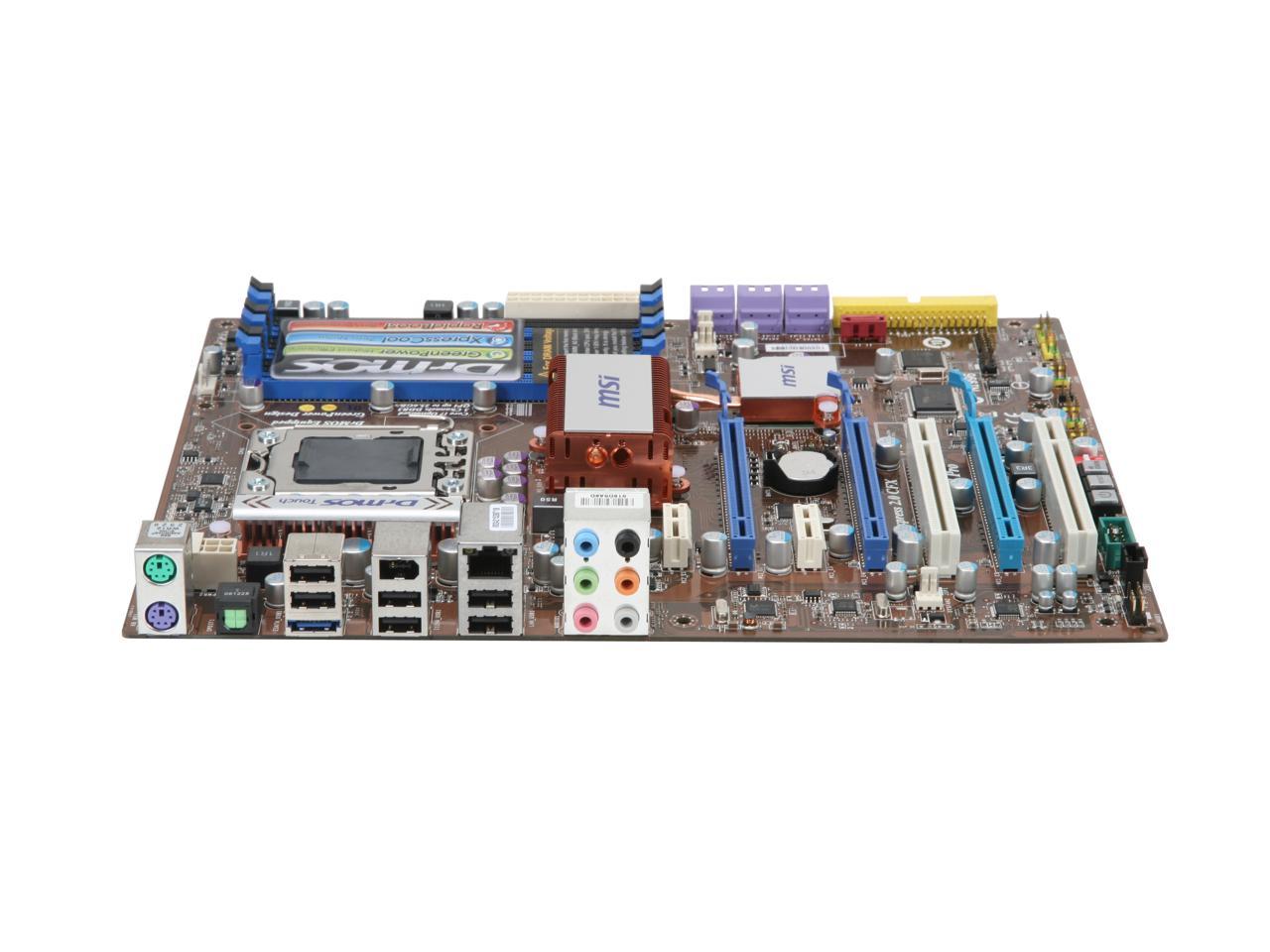 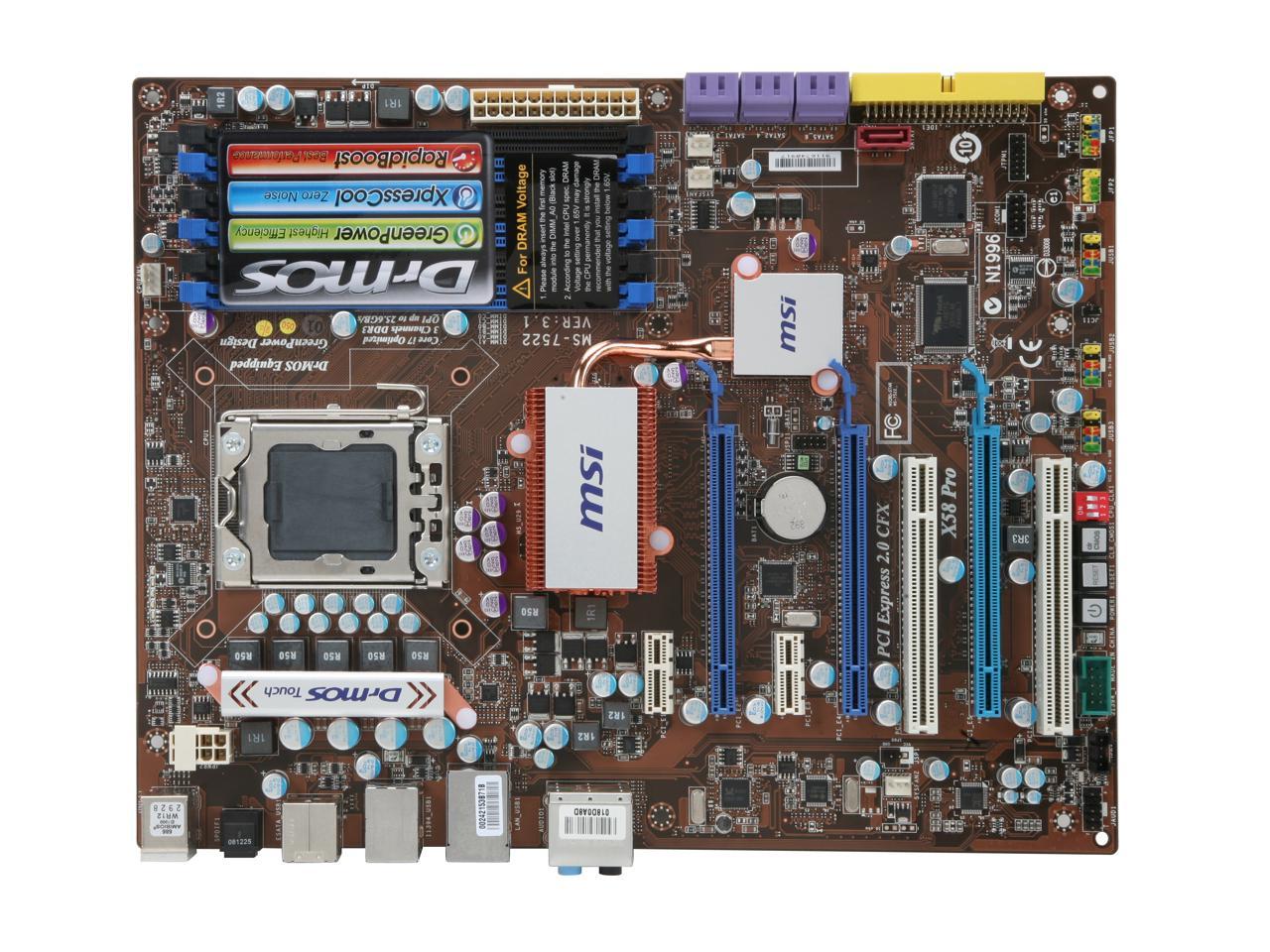 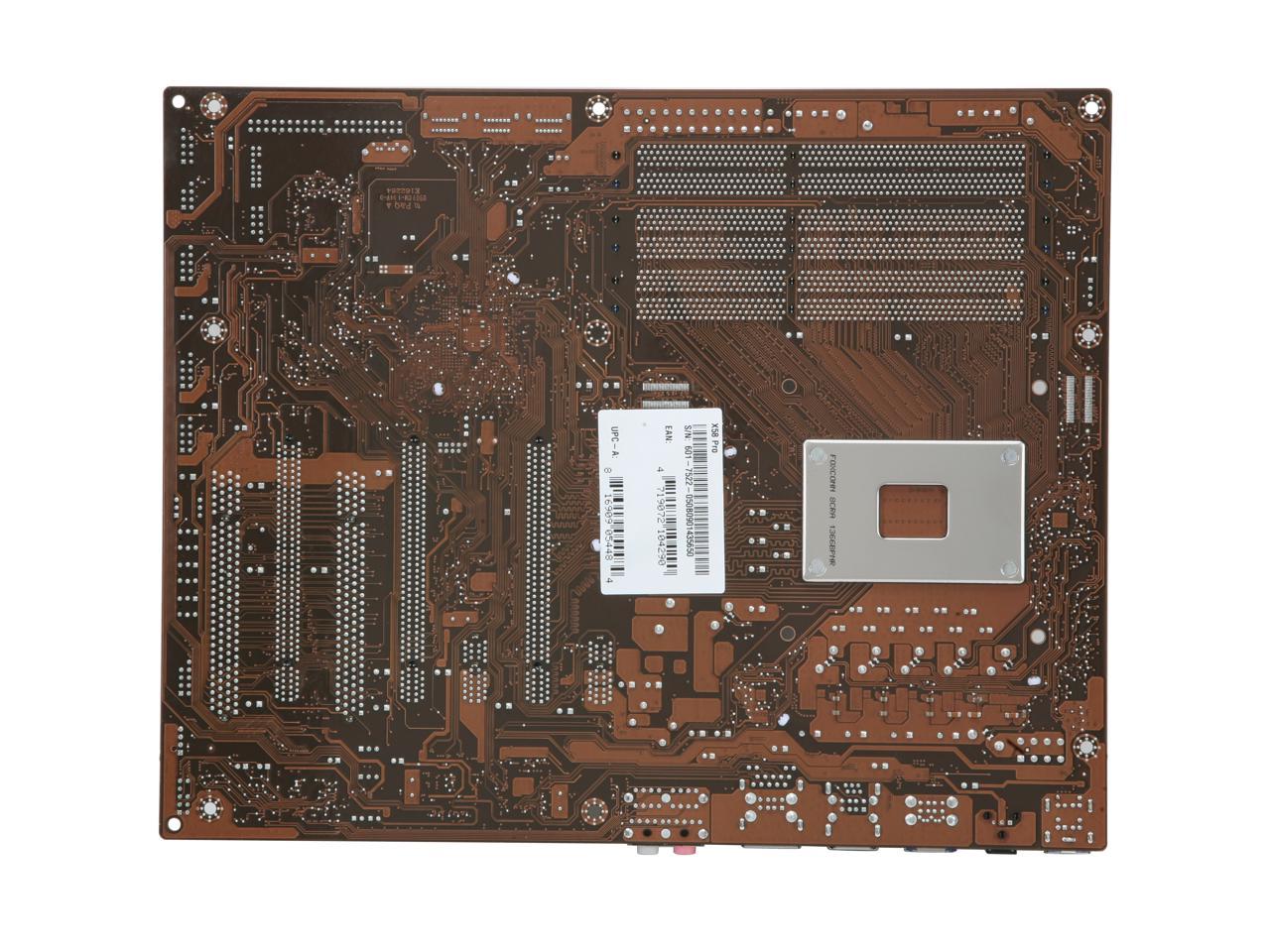 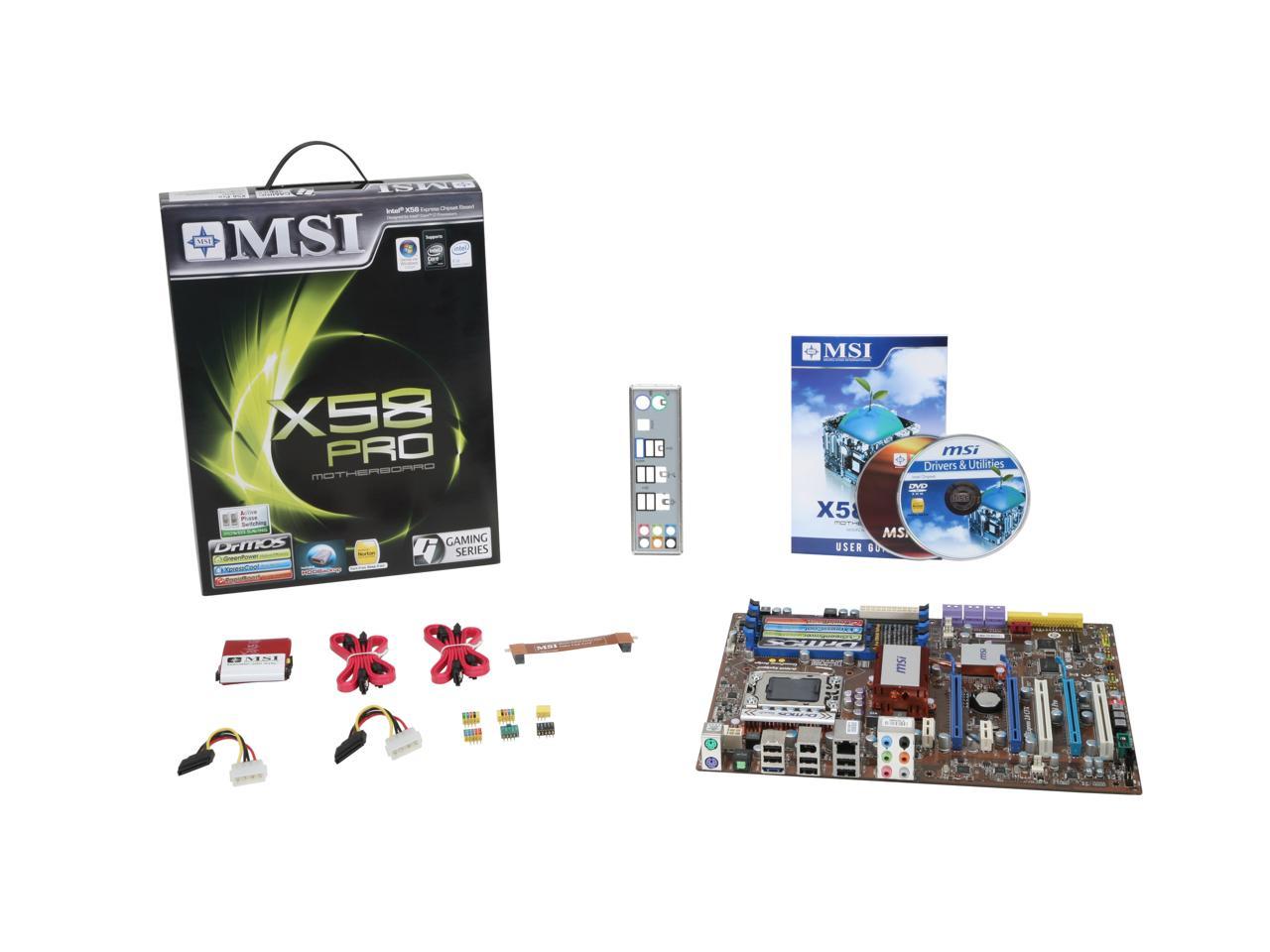 (95) Write a Review
See more "socket 1366 motherboard"
In stock.
Ships from China.
Most customers receive within 4-22 days.
Overview
Specs
Reviews
Experience extreme computing at an affordable price with a system built around the X58 Pro ATX motherboard by MSI. The X58 chipset on the MSI X58 Pro comes with a new processor socket LGA1366 that can support the latest Intel Core i7 processor, code named Nehalme, supporting the third generation of HT technology realizing eight threaded computing under a quad-core architecture.
Up to 24GB of DDR3 1333 RAM can be installed with triple channel mode for increased performance. Three PCI-Express 2.0 x16 cards can be mounted for cutting-edge graphic power with support for either NVIDIA SLI or ATI CrossFireX. Highly-conductive polymerized capacitor give longer life and higher energy efficiency by supplying power to vital components independently.
Get eight channels of HD sound from the Realtek ALC888S audio chipset for pure, clear audio. Connect up to seven SATA drives at 3Gb/s for high-speed data transfers as well as the option for multiple RAID configurations. Integrated Gigabit Ethernet LAN allows bottleneck-free connections to other network devices at broadband speeds and six USB 2.0 ports allows for nearly unlimited possibilities in connecting peripheral devices.

Cons: IOH runs pretty hot (85 idle, 90-95 loaded). I havent contacted MSI as of yet, but from what I've read, this seems to be common on their x58 eclipse, and x58 premium boards. It has not caused any instability yet, but I am keeping an eye on it. With IOH running hot, the placement of the heatsink in relation to the 1st PCIEx16 is a little close for comfort. The bundled OverclockingCenter software is very unstable, and has a killer design flaw. I have a 140mm fan for intake on the front that spins 800-900 rpm. The monitors in the prog default to alarm if ANY monitored fan is under 1k rpm. This can be solved by customizing your own values for the alarms, and saving a profile. Unfortunately the program does not keep your settings after you close it, meaning every time you start it up, you have to listen to the alarm until you can set you're profile. There is a "silence" button, but if you click it (or any of the other buttons in that particular toolbar) the prog crashes..

Overall Review: As I said, aside from the s/w issue (which will probably be corrected at some point) and the high IOH temps, I have had no real issues wih the board. Overall I'd say it's worth the money, but if I had to do it again, I'd probably go with a different board.

Pros: -It's a motherboard, if it works, it works! -High RAM Capacity -PATA and PCI Support, which I need. -PS/2 Ports. I don't like using USB ports for Keyboard/Mouse -Cheap (For an X58 Board) -Easy Overclocking Switch; the i7 ROCKS

Cons: -Had to RMA one due to a bad BIOS flash. -IOH runs constantly at 70C -Included utilities SUCK (That's why I had to RMA, their auto-update tried to flash the BIOS from Windows- not a good idea!)

Overall Review: Contrary to what other reviewers say, this board DOES in fact support SLI, it says so under BIOS Version 8.2: http://www.msi.com/index.php?func=downloaddetail&type=bios&maincat_no=1&prod_no=1744 I don't currently use SLI, but I like the comfort of having it.

Pros: cheapest board available for a reason.

Overall Review: Is the X58 Pro motherboard a Lemon? The x58 cooling solution on the board is inadequate by far. Very soon, MSI will introduce a replacement board called the X58 Pro-E which has a different heat sync on the Dr. MOS and X58 chipset. They will no doubt ignore all of us with the Lemon. Which is totally unacceptable and enough to make me not want buy any MSI products ever in the future! The only solution to cooling your IOH on the X58 Pro is to replace the useless MSI heat sync or run a small fast fan on to them. Here are the possibilities; 1) with stock cooler IOH is 72C at idle 2) Running a 40mm 4000RPM fan ($12.00) directly onto the chips set from above the chipset, the IOH drops to 55C. 3) Replacing the sock solution with 2 Thermalright HR-05-IFX (23.00 each) the IOH drops to 38C* *note: In my Antec Sonata case the HR-05-IFX are directly in the path of the 120mm fan exhaust that is mounted to the hard drive cage. This fan, draws air through the bottom of the case, over

Pros: BIOS reset button on the board (as well as power and reboot) replaced old school jumper -- really nice so you don't have to remove video cards and cram larger hands around everything. A must when overclocking experiments go awry. 2 PCIx16 is plenty. I only plan on keeping one video card installed at a time anyway, but if I ever needed to CrossfireX it's ready. No parallel or serial out the back, but there is one serial on the pcb if you really think you need it. ;) Stable. I love the heat pipes. Oodles of USB & Firewire ports. Has nifty LED indicators all over the board for informational purposes (green = PCI slot filled & working) With Radeon HD3870 and memory at stock speeds I'm getting around 11,500 3dmark 2006.

Cons: I think MSI gave me the wrong driver disk -- when I tried to install the NIC drivers Windows would absolutely not start the NIC. I downloaded all drivers to my thumb drive, threw that in & reinstalled everything from there. All okay now (it's shown as a totally different Realtek ethernet model than what the original driver disk reported). It's a minor hassle but could really disturb a rookie. For that reason alone I give it 4 stars.

Overall Review: I don't care for the brown color -- (a tad on the ugly side). What does brown do for you? It doesn't really matter -- it's what's inside that counts. I've got a nice 12" cold cathode light that draws eyes away from the PCB. Heat pipes look great. It also comes with backup software which I didn't really care for, but at least it's included. Make a separate partition (preferably a separate hard drive) and it should work fine. I'd rather use Ghost, Nero Back-it-up or Retroexpress (comes with My Book World Edition NAS). 320GB SATA 3.0 Seagate Visiontek Radeon HD 3870 overclocked Lite On DVD burner (finally a non-noisy one) Antec SuperLANboy case 550 W Ultra power supply 3x2GB Corsair DDR3 1600 (running at memory bus 1333) Vista Home Premium SP1 nMEDIAPC ZE-C138 Silver Aluminum Panel 5.25"All-in-one 20" VP912b Viewsonic LCD monitor Logitech S510 keyboard/mouse

Pros: One of the cheaper socket LGA1366 out there, but is shows.

Cons: This motherboard has an issue with the northbridge/southbridge having heat issues. You either have to replace the heatsink or re-apply thermal compound. See MSI forums for details. Also had an issue with RAM and system stability. If you need MSI support, the forums are more helpful than their tech support.

Overall Review: System would randomly freeze up or restart when using Corsair Dominator RAM. RAM is recommended for this MB according to Corsair's website. Had to contact both MSI and Corsair to determine if the issue was with the MB or RAM. MSI said to contact Corsair or the correct settings for the RAM; Corsair said to set to defaults and apply XMP profile. Had to disable XMP and underclock RAM to 800MHz in order for the system to be stable.

Overall Review: save your self the head ache and by another product.

Pros: Overall a good board, cheapest Intel X58 Express board on the market (as of this writing). Overclocking fairly easy and has newest board features. * Lots of features (although no NVidia SLI) * Running stable with stock settings * 6-Dimm Slots for Max 23GB or Memory (Manual states that 24GB will not register)

Cons: Mine is exhibiting an odd behavior with all 6-DIMM's populated and rebooting will cause random reboots. If you power off, then power on, works fine. Rebooting works fine with 3-DIMM's populated. Will probably have to wait for a BIOS update. Other than that, the SATA locations are a b-tch (edge of the PCB, verses parallel with the PCB).

Overall Review: Cheapest way to get an i7, but it runs fine.

Pros: Solid board with good features. No problems out of the box. I was able to get GSkill memory to run at 13333 with CAS 7 without any difficulties. Some other boards have required voltage changes to get that to work. Layout seems fine, and I have no complaints. Lots of LED's on the board make it an attractive build for a clear case too.