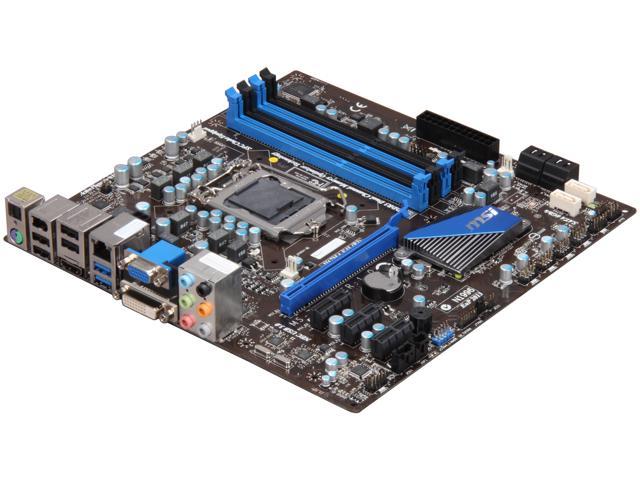 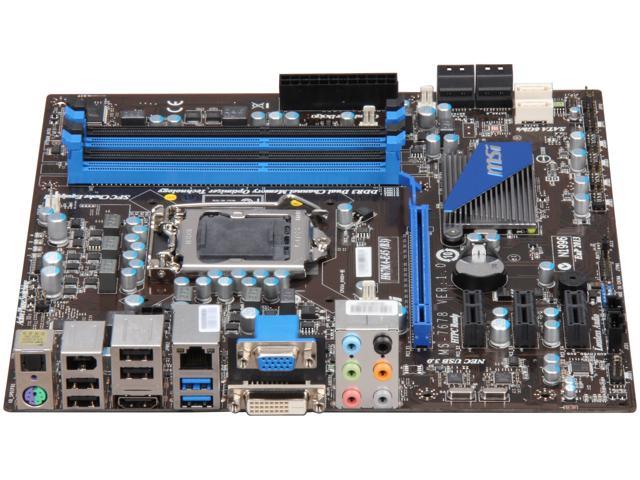 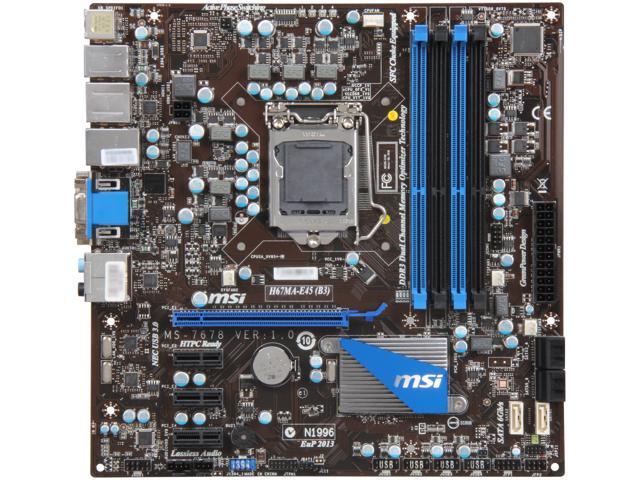 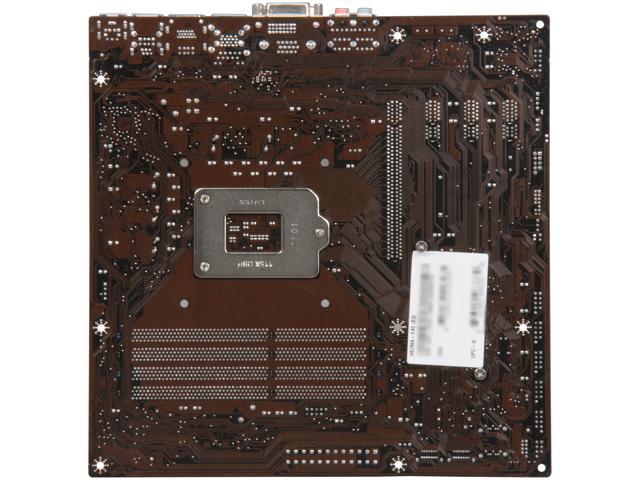 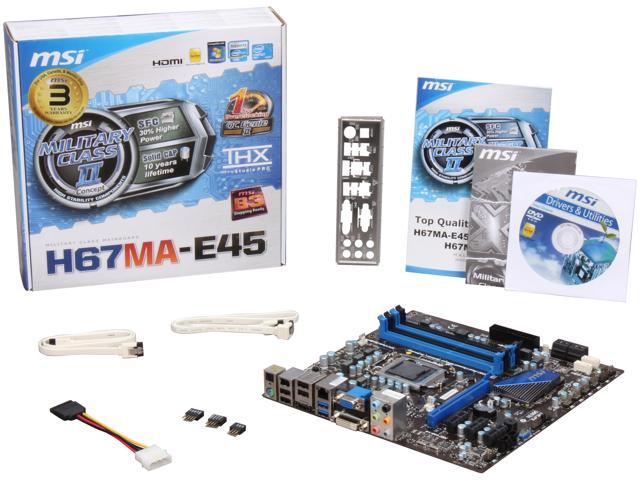 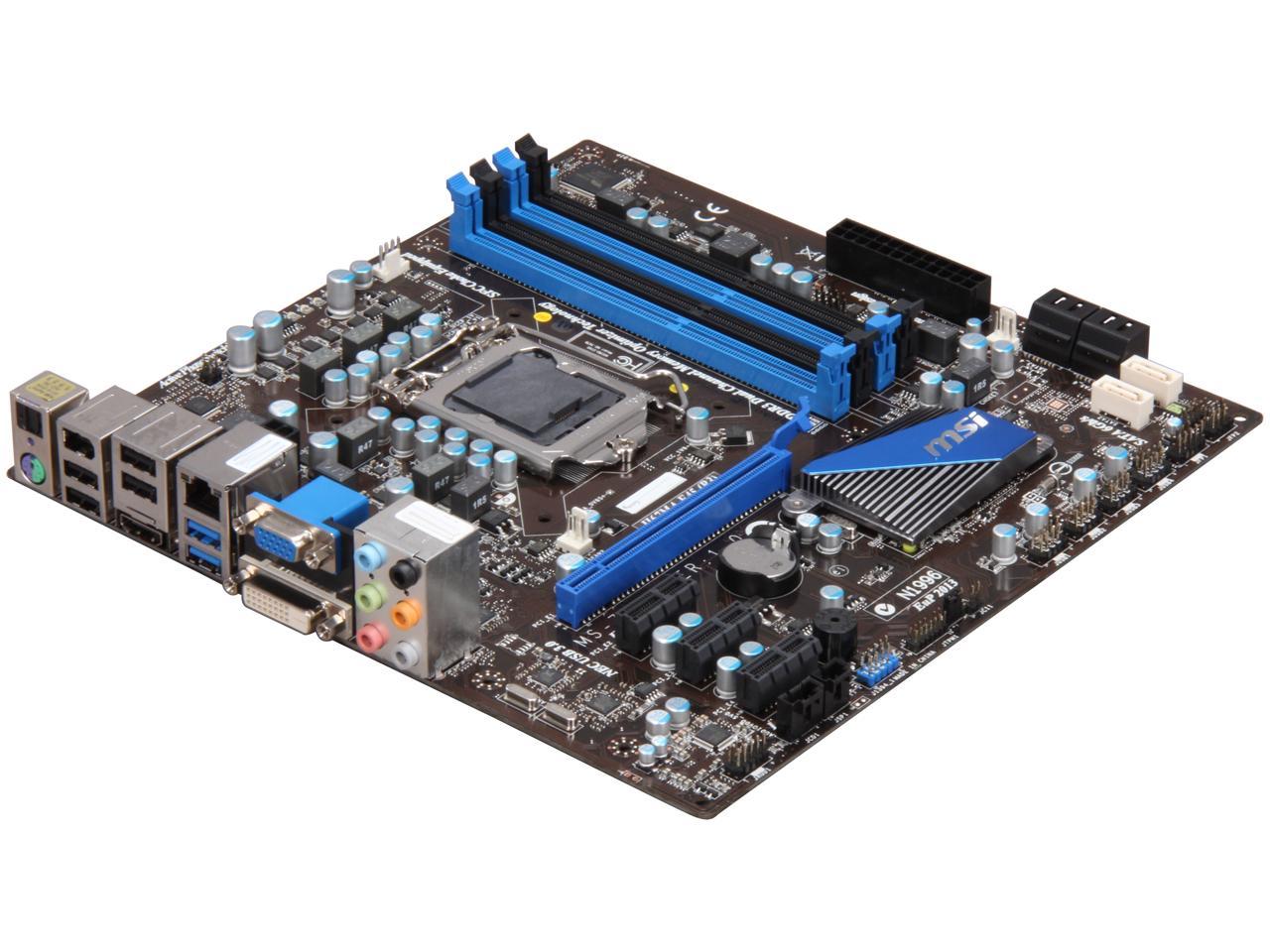 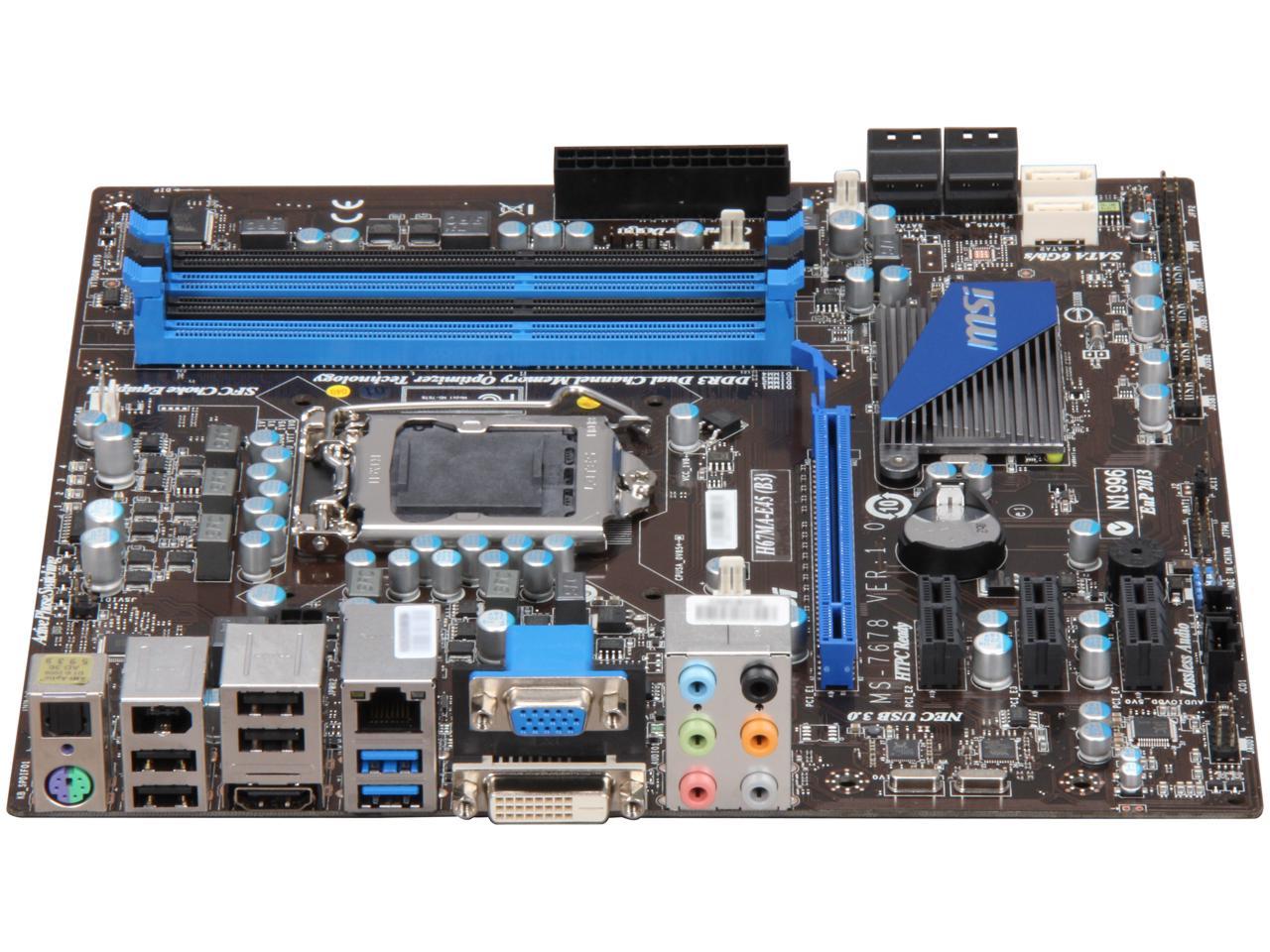 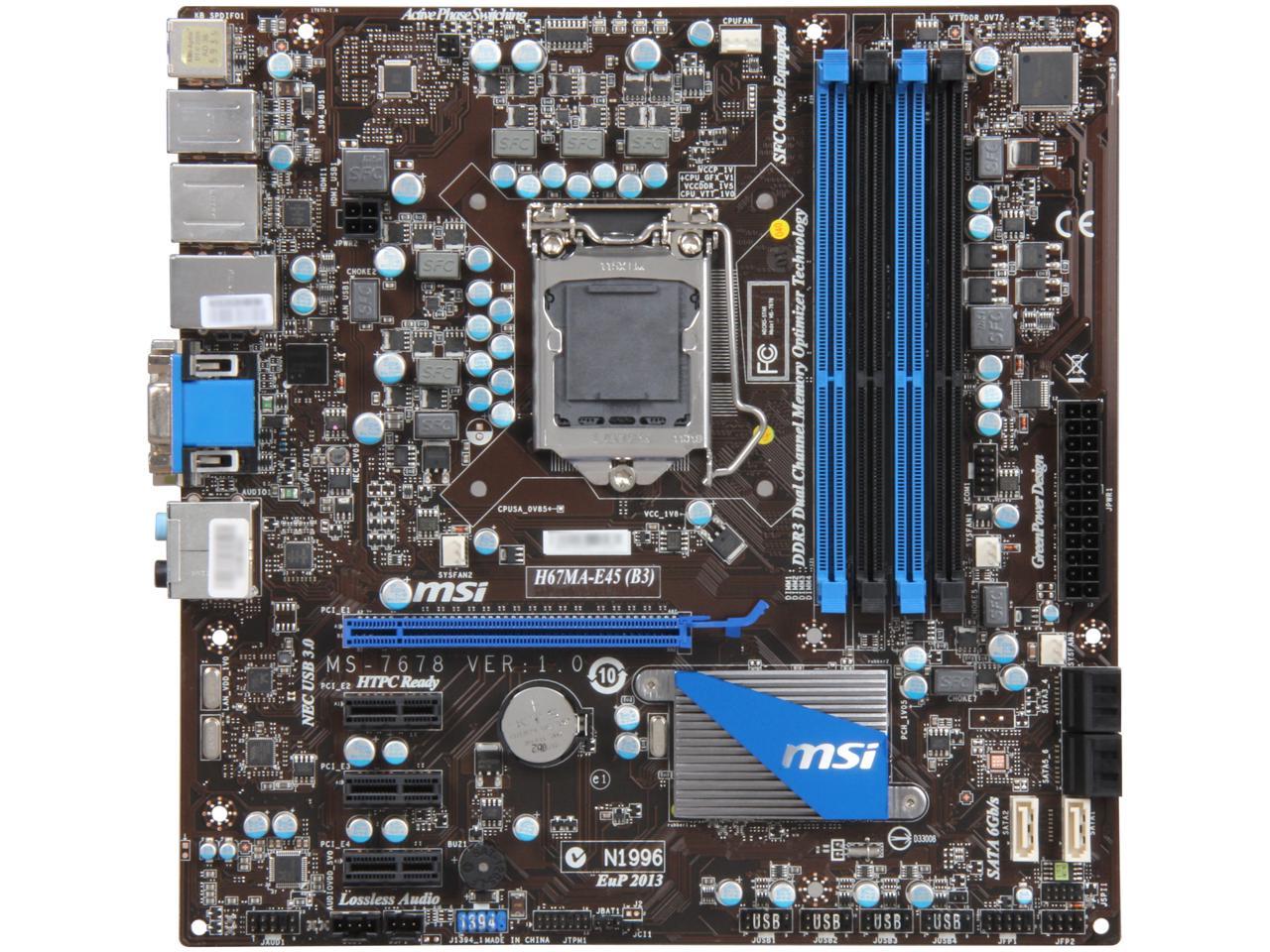 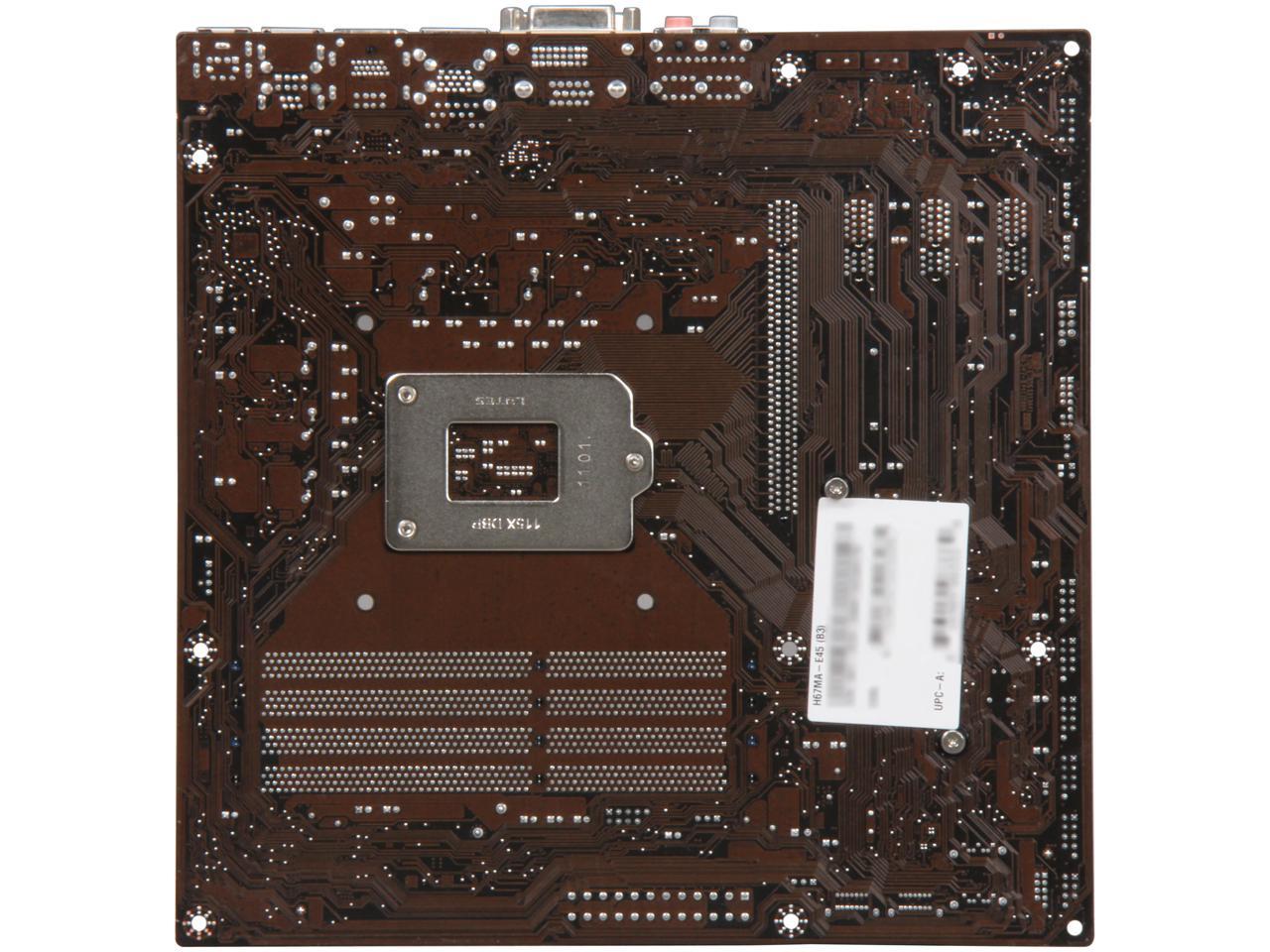 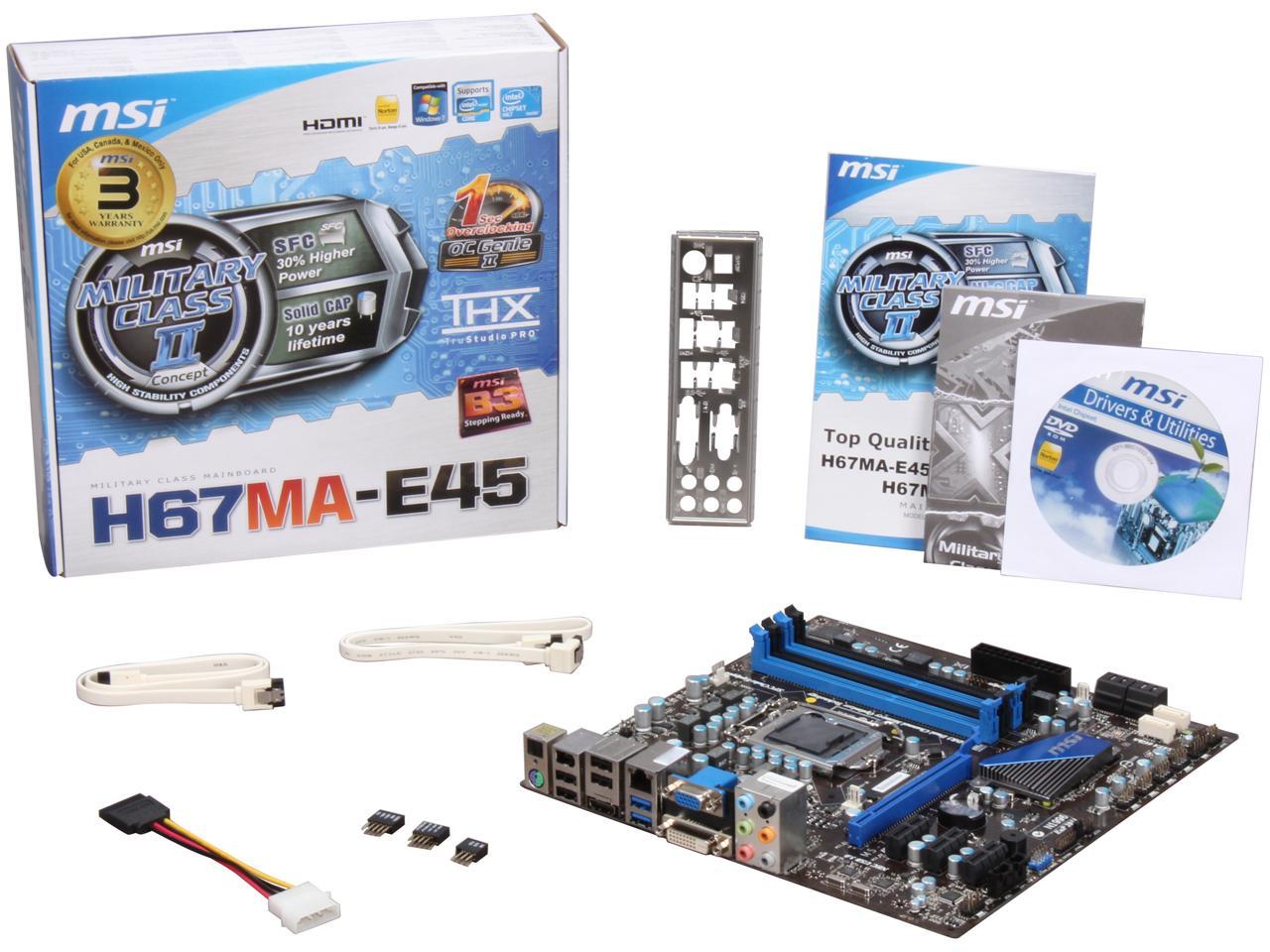 (20) Write a Review
OUT OF STOCK.
Overview
Specs
Reviews
Enjoy the power of Intel's new Core i series CPU and release all the potential of the processor with the H67MA-E45 (B3) motherboard.
Based on the B3 stepping H67 chipset which has already fixed the SATA problem, the H67MA-E45 (B3) allows you to take full advantage of the processing power of the evolved Intel LGA 1155 CPU without any extra hassles. The OC Genie II detect hardware configuration and intelligently auto set clock/voltage of CPU and memory or iGPU. You'll get more power from dual channel DDR3 memory architecture. And a good list of features drives your system to the limit and makes this board a second to none choice for your dream system, whether you replace your existing system or build a new power house from scratch.

Cons: The board will not post with a HDMI cable connected.

Overall Review: I paired this board with a i3 2100 and 4GB of ram. This was supposed to replace my existing MythTV frontend. Unfortunately the board will not post when you have a HDMI cable connected. I used an old monitor to get the system installed (Ubuntu 11.10). Once I connected the system to my Denon receiver, it would no longer post. To boot, you need to disconnect the HDMI cable, power the system on, and count to 10. Once the OS has booted you can reconnect the cable and the display works fine. The board came with a very old version of the BIOS, so this problem may have been corrected already but I have not found a way to update the BIOS without installing Windows. The "Live Update" utility in their clickable BIOS just hangs at 0%. This board is going back tomorrow...

Manufacturer Response:
Dear Valued MSI Customer, We would like to apologize for the issue you have experienced with this particular MB. Please email me directly via USUserSupport@msi.com your MB's serial number and your complete contact information, subject heading "EAHH67MA-E45". I would like to help you get this resolved. Best Regards, User Support MSI Product Support
Petrus B.
Ownership: 1 month to 1 year
Verified Owner
MSI Listens & Solves7/12/2011 7:29:43 AM

Cons: *Not for CPU overclocking (H67 chipset) but makes up in reliability. *Hope that MSI will upgrade BIOS to support full-time VIRTU, as Intel did on H67 boards *Still expensive - competing in price with Z68 boards

Overall Review: The BIOS V1.10 update fixed several problems for me, including Realteck NIC not waking up from Sleep, multiple bips at bootup... I wish that MSI specified in bios description what fixes it does, like Intel specifies. Nonetheless, it shows that MSI listens to us. MSI is a strong and reliable solution you can count on for long term use. Thank you, MSI.

Pros: Decant price for the features, at least on paper.

Cons: Mated this MB with an Intel i5 2500K CPU and 8GB of ram. I was going to build a new HTPC for the living room. Only one little problem, the MB will not POST with a HDMI cable attached. To build the system it was attached to an older Sharp TV (HDMI input), installed W7 64 bit, drivers and XBMC, so far so good. Moved HTPC to living room, attached HTPC to a newer JVC TV and it would not POST. Then I tried a 3 year old Sony Bravia, same thing, no POST, just a flashing curser. Took it back to the Sharp TV and it would POST fine. Emailed MSI tech support and was told to only use the Sharp TV! What? "OK kids lets go down to basement to watch your new movie". That's like going to your car mechanic and telling him your new car won't turn left, his response; "well only turn right". Are you serious MSI, that is your answer? I asked them how to return this MB for exchange or repair two days ago, still waiting. I then spent 47 minutes on-hold with their 1-800 number, I finally gave up.

Overall Review: If you Google H67MA-E45(B3) and HDMI boot failure you'll see that this is a common problem. There is a similar review here, same problem. I'm still waiting on a response from MSI, doubt if I'll ever hear back from them. I’ve had the MB since the 15th of Feb so Newegg refers you back to the manufacture to get things resolved. Well, it was a hundred dollar lesson learned, never buy another MSI product.

Manufacturer Response:
Dear Valued MSI Customer, We would like to apologize for the issue you have experienced with this particular MB. Please email me directly via USUserSupport@msi.com your MB's serial number and your complete contact information, subject heading "EAHH67MA-E45". I would like to help you get this resolved. Best Regards, User Support MSI Product Support
James A.
Ownership: more than 1 year
Verified Owner
Can't use my HDMI TV for BIOS setup4/27/2012 6:12:00 PM

Pros: Had the features I needed.

Cons: Can't get into BIOS setup with an HDMI TV. I wanted to use this system with my home theater, and I had to lug out my old computer monitor to do it. That's not right. Also, I have to KEEP that old junker in case something ever goes wrong.

Overall Review: other than that, in over a year no problems.

Manufacturer Response:
Dear Valued MSI Customer, We would like to apologize for the issue you have experienced with this particular MB. Please email me directly via USUserSupport@msi.com or call us at 1-626-271-1004 Press 1 your MB's serial number and your complete contact information, subject heading "MSIH67MA-E45". I would like to help you get this resolved. Best Regards, User Support MSI Product Support
Cale S.
Ownership: more than 1 year
Verified Owner
Solid Board!2/24/2012 2:46:47 AM

Cons: Not for overclocking, SATA ports facing a weird direction

Pros: 4 memory slots in an mATX board. Works with Sandy Bridge processors. No problems with my video card (HD5770) interfering with the RAM slots. I may have to remove the video card if I ever need to remove the RAM, but that's not a big deal. The PCI-Ex16 slot being in the first slot works nicely for me too since my case is a BTX-styled one, so it moves the card a little further from the internal 3.5" drive bays. USB 3.0 on the back. MSI M-connector was a nice touch for the front panel connectors - made it a little easier to hook them all up.

Cons: Occasionally hanging at boot - most likely due to some USB device, from what I've read online (maybe my card reader). It doesn't seem to be limited to this MSI board either, but it doesn't seem serious or frequent. Manual is sparsely worded - wish it had more about the various settings in the bios. No PCI slots (but I don't have any PCI cards) and no USB 3.0 headers on the board.

Overall Review: The beep at the beginning indicates a successful boot. Multiple beeps can indicate the number of USB devices plugged in. Clickable UEFI bios is kind of gimmicky but it works just fine. Core i3-2100, 4x2GB DDR3 1333, HD5770

Pros: This board offers a lot of features for the money. USB 3.0, solid caps, onboard HD graphics, DVI and HDMI ports, and a 3 year warranty for less than a C-note. This is my first MSI board and because of the performance and stability of it, I won't hesitate to buy another.

Cons: After 5 months, I haven't found any cons.

Overall Review: Some of the negative reviewers want to blame MSI for their lack of reading comprehension. Disregard them.

Cons: the 3gb/s sata ports are stacked and facing outwards towards my case wall. i could not fit my sata cable in without modding my case.