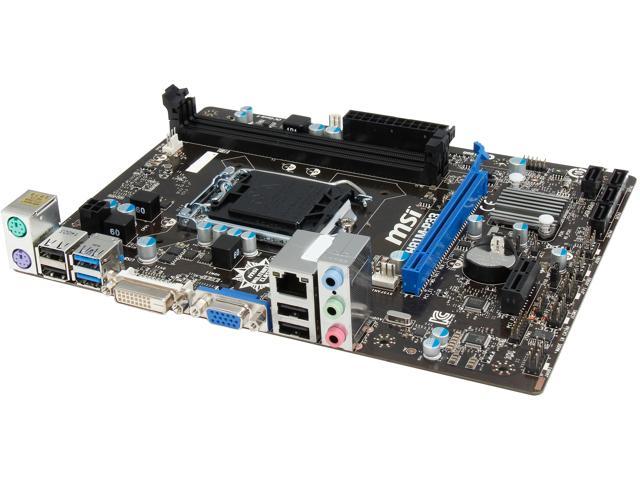 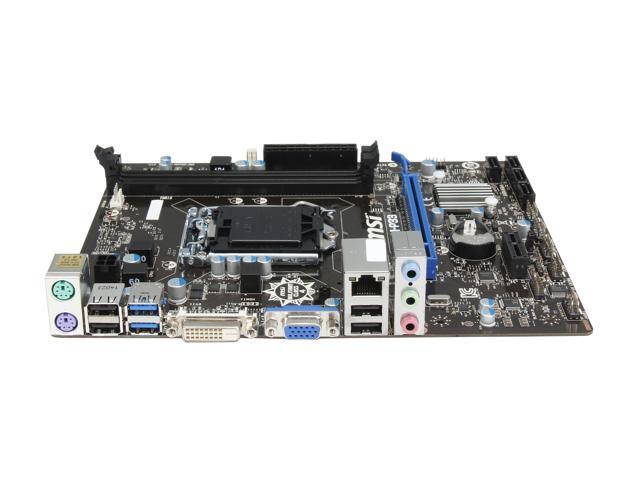 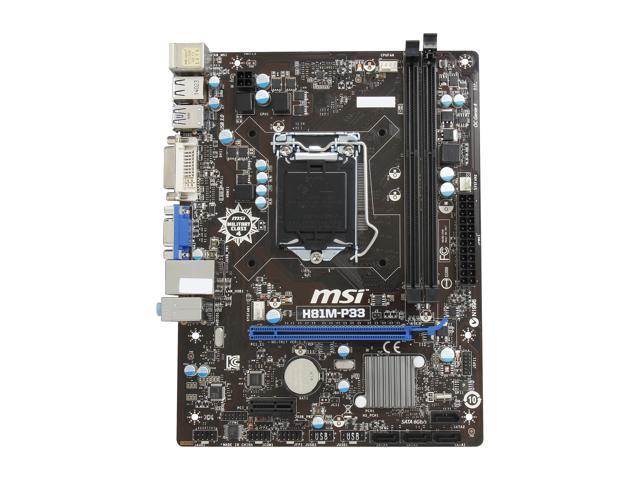 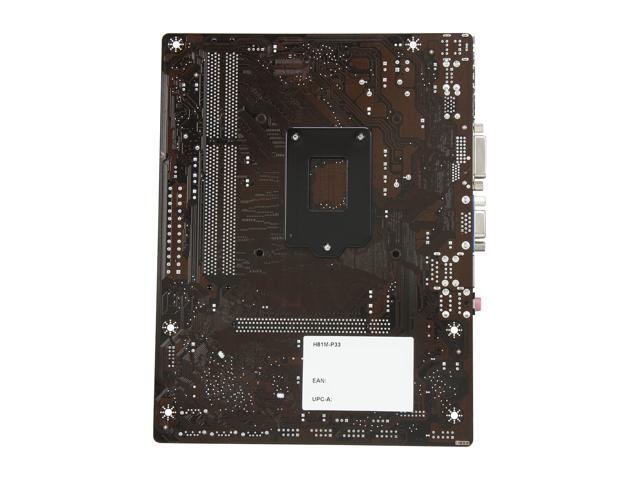 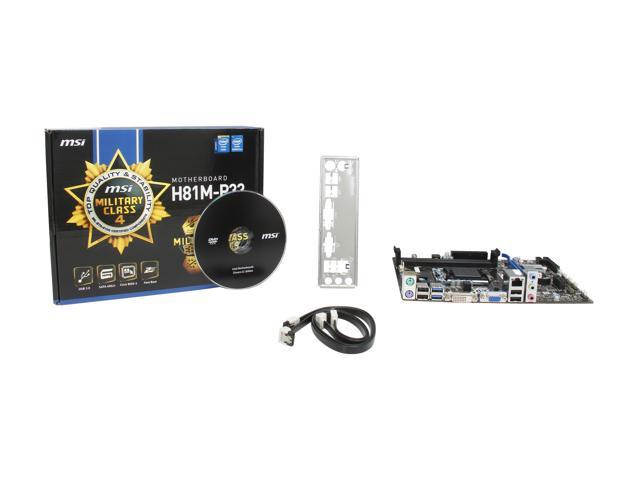 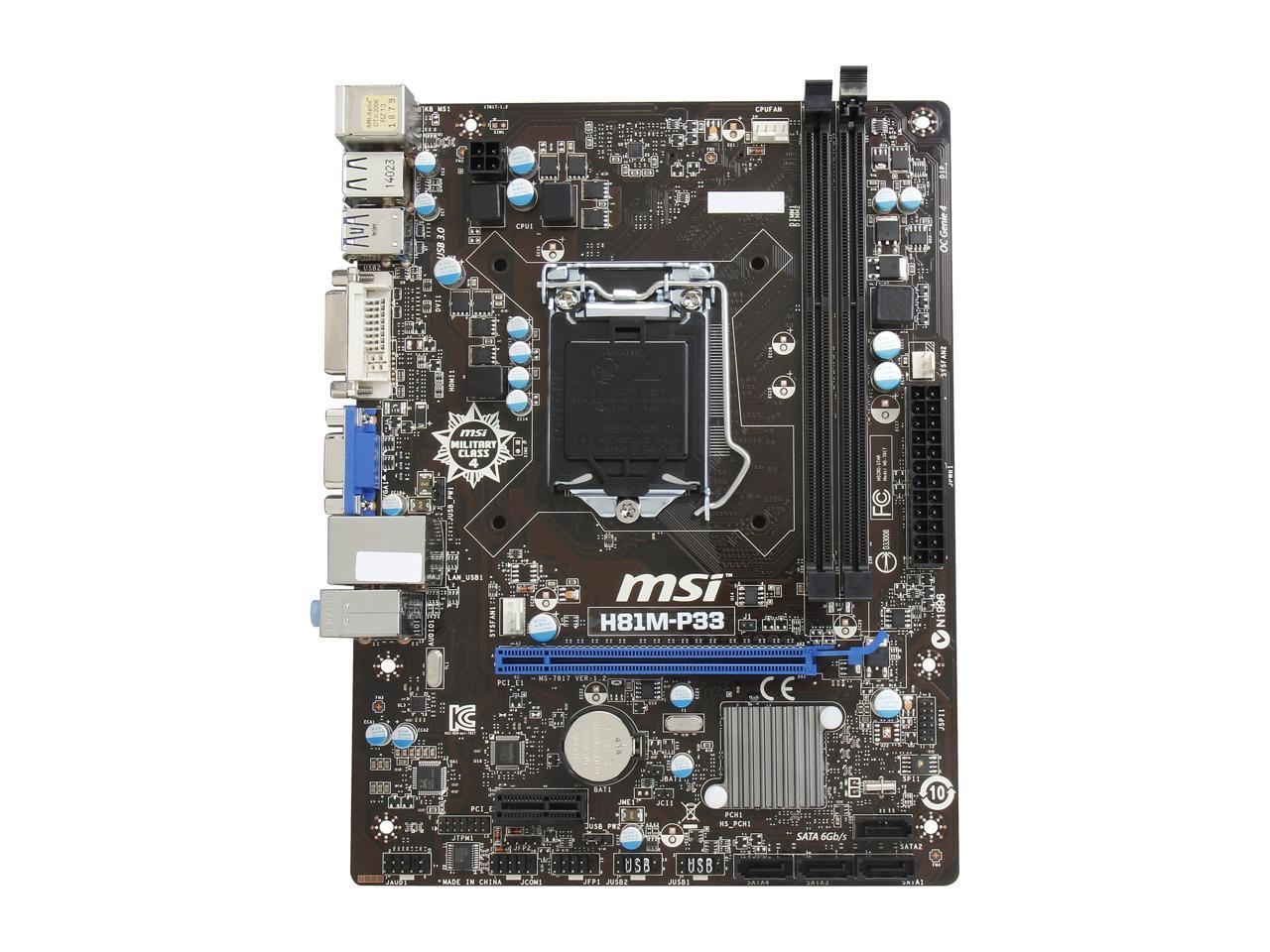 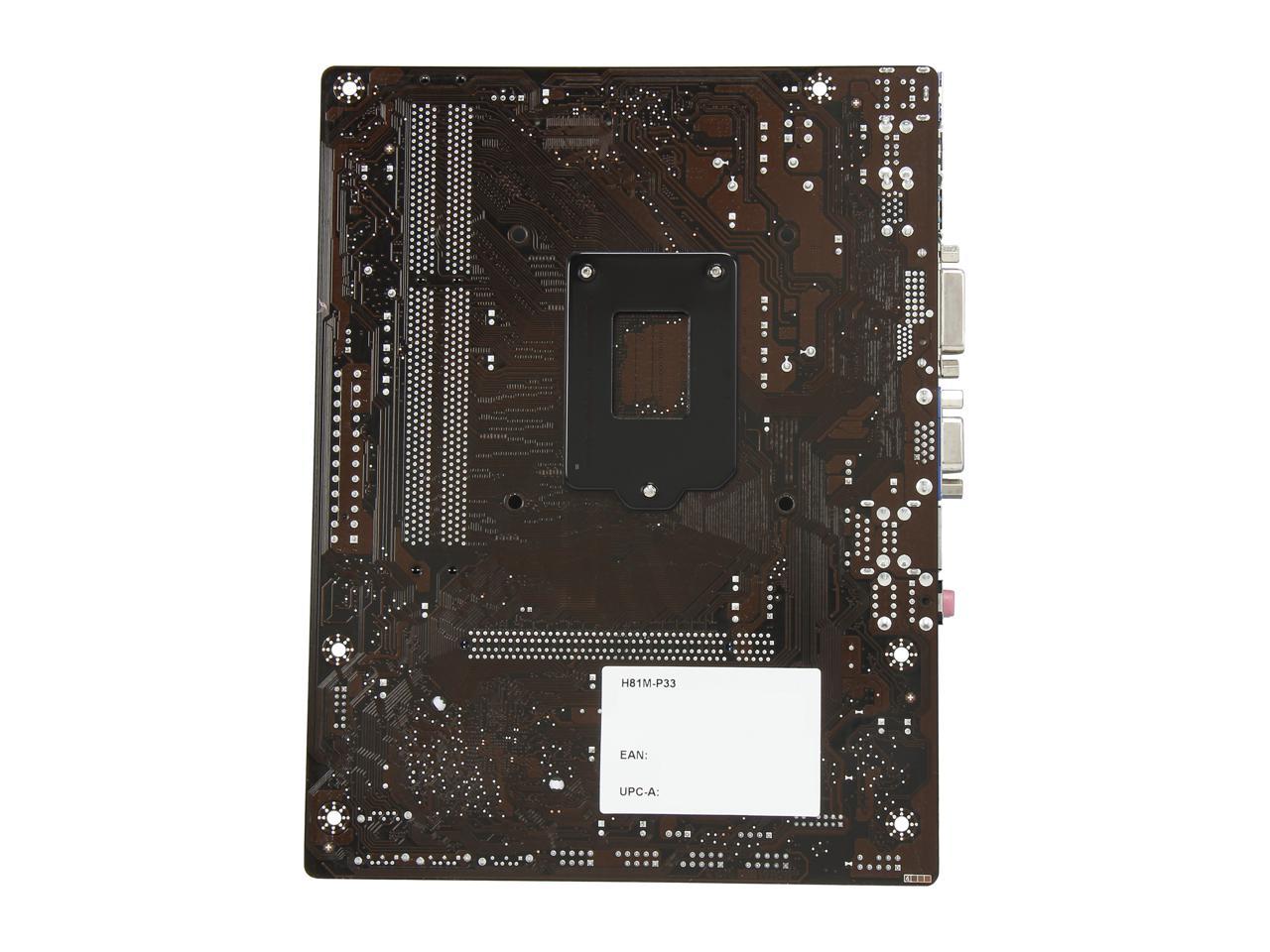 M-Flash
Compared to common motherboards which need extra BIOS chips, MSI's M-Flash has a double advantage - first, it doesn't need extra components, and second, all your BIOS data will be saved in the USB drive. The stored data does not only have backup and upgrade functions, it can also be seen as a portable BIOS chip which is actually able to boot up your PC. Live Update 5
MSI Live Update 5 is a powerful and useful application for updating the latest BIOS and Drivers, saving you time and lowering the risk of updating. End-users can install and run the Live Update 5 software on their computers with the companion CD or downloading the app from the MSI website. USB 3.0
Compared to the 480Mbps provided by traditional USB 2.0, the all-new USB 3.0's 5Gbps offer 10 times the transfer bandwidth, so transferring a Blu-ray movie takes less than one minute. SATA 6Gbps
SATA 6Gbps provides double the bandwidth of traditional SATA 3Gbps, and increases the data transfer rate between your motherboard and internal storage devices, such as 7200RPM HDDs and 10,000RPM HDDs and SSDs. It's also the current trend for upcoming high-speed internal storage devices to break the existing bottleneck of a PC's performance. Military Class Essentials
The core of Military Class 4 is based on the essentials which increase your stability in the worst conditions. The humidity protection and high temperature protection ensure your system survives each environment, no matter how harsh. The new structure of the PCB limits EMI radiation. On top of that all the connectors have ESD protection in order to prevent short circuit.

ESD Protection
Anti-ESD ICs and fuses onboard help to totally protect your motherboard from electrostatic damage. Cons: None - just make sure the expansion slots, SATA (cables and ports), and other connectivity options are enough to meet your needs. I miscounted my drives and ended up having to leave out my optical drive because the board only has 4 SATA slots and I needed all 4 for my HDs (totally my fault).

Overall Review: Booted up immediately with an i5-4460 and 8GB of GSKILL Ripjaw X RAM. Using for a small Microsoft Windows Server 2012R2 build that was on i7/X58, and dreaded having to reinstall OS and did not have a lot of time. I figured I would just move the HD over and try to boot without reinstalling OS, and after installing new drivers the OS works just fine (did have to reactivate OS and Office though). I may reinstall anyway when I have time just to make sure I am not leaving any performance on the table. Seems to be working just fine though. No issues streaming 1080P content, copying large files, etc. over my wired Gigabit LAN. For under $50, you can't beat this board. It doesn't have all of the bells and whistles of more expensive boards, but so far it has been very reliable and more than adequate for my needs. This is my 2nd MSI board (also own a X79A-GD45 plus) and both boards are working great.

Pros: It's cheap and it gets the job done. I wasn't expecting much of a $44 motherboard when I've been disappointed by other boards in this low end range, but for the price MSI offers a surprisingly full featured set. The visual BIOS is definitely on par with competitors and if you've used any other MSI boards (my work PC uses their X79A-GD45) it doesn't take much to get used to it. I paired this with a Pentium G3258, 8GB of Mushkin Ecoline RAM, and an older GTX 550TI (will be upgrading to GTX 750 relatively soon) and it booted up on first try and relatively easily. It found both the boot drive and a second 2TB hard drive that I use for mass storage easily, along with the BD-R drive. With a BIOS update you can run some mild overclocking features on the Pentium G3258 such as a multiplier change and unlocking both cores on the CPU, a nice upgrade from the locked i3-2120 I had been using previously.

Cons: Don't expect much out of the overclocking features, if you're going to go for the Pentium G3258, you might as well run it at stock speeds or just go for a mild change in the multiplier, but you can't run advanced overclocking features such as voltage changes and changes in the RAM speeds.

Cons: Let's be honest, this is a budget oriented motherboard. You're not looking at this for all the bells and whistles. That said, you still get the most important more modern features. You do get USB 3.0, but it's only on the rear I/O and not on your case. Sata ports are a bit limited, but 4 is enough for most standard builds.

Overall Review: Lacking from H81 is PCIE 3.0, however this won't be an issue for the likely relevancy of this build. The lack of an internal USB 3.0 header is slightly annoying if your case only has USB 3.0 ports, but this can be quickly rectified by using an adapter for an internal usb 2.0 connector. Your USB 3.0 slots on your case will only run at 2.0 speeds, but at least they'll work. A lo-fi way to get usb 3.0 "front panel" is to buy a cheap usb 3.0 extension cable and rig it to your case. This is a great board for low end builds or for anyone not overclocking that doesn't mind a few sacrifices in the name of cost/performance. Build: i5-4430 (might upgrade to i7 later) MSI H81M-P33 (duh) 8GB RAM (1 8GB stick, to go 16GB later) Seagate Barracuda 1TB Kingston V300 120GB SSD HD7950 Cooler Master i500 (For Haswell low power state support) Xion Xon-560 (great features for the price, good pair with this board)

Cons: - Documentation was sorely lacking, this was my first time buying an MSI board, but I've used their other products with great success. I was a little disappointed to find that the supporting documentation didn't really explain too much. I had some information on the correct way to install the processor, ram, etc. But did not have a map of the board with information on which things to install where. As a result, it took some time to manually review the board and the labels placed around the various pins and connectors to determine where to install various parts.

Overall Review: One issue I ran into was that I had a fan which could be powered by usb and by power supply. I ran out of "fan power" slots on the motherboard (I had 2 case fans, mobo only has 1 cpu fan and 1 sysfan slot, so I was out 1 sysfan), but I noticed that there were 2 "usb_pwr" sets of pins, both of which had a small black plasic piece of two of those 3 pins. I removed that black plastic piece, which turns out, you can't do. Apparently those plastic things are essentially resistors, which control the current flowing through the USB power. DO NOT REMOVE THEM OR YOUR BOARD WILL NOT WORK. Their documentation did not even mention them. If I threw that plastic thing away I would have been out of luck. All the 1-star/2-star reviews saying they were getting "over current" warnings, that's why. Don't learn this lesson the hard way, leave those usb_pwr pins alone.

Pros: -Small Form Factor -Powerful for the price -Has everything I needed -Beautiful UEFI.

Cons: -2 DIMM slots. Would have liked 4 to support the 16GB of RAM I have. -UEFI took some time for me to get used to. (It is the first UEFI I have used) -Would be nice to incorporate DisplayPort or HDMI.

Overall Review: I needed a reliable and affordable motherboard to bring my dead computer back to life! I knew MSI could help! I already had parts from a previous PC including an Intel I7-4770 which is locked and ineligible for overclocking. I was not worried about the chipset. I have a 4 x 4GB kit of DDR3 RAM and this MB only supports 2 DIMM slots, I was willing to make that sacrifice. Hand down I would buy this again in a heartbeat, and I highly recommend this if you want to build a low cost PC that can support high-end gaming with PCI-e 3.0 support and Intel LGA 1150 socket. Thank you MSI and Newegg for bringing me back into the computer gaming with a refreshed desktop!

Pros: This is a nice board for its price. I just completed a new build using the (Haswell) Pentium 3.0 GHz CPU with 4G of RAM, and this motherboard performs flawlessly. The SATA-6Gb/s and USB-3.0 are what convinced me to purchase it. My main drive uses the SAMSUNG 840 EVO 120GB SSD which allows the computer to go from power-up to ready in less than 21-seconds, including the BIOS screen.

Cons: The board is a bit thinner and more flexible than I like, so I used extra care not to stress it at all when installing the main power connector, and I suggest you do the same.

Overall Review: I had to use the included disk to install the network driver, first, before I could download the latest versions of all the other drivers.

Pros: Tidy, compact (less than 7x9 inches), two SATA3 ports for SSD's (yeah!) , two SATA2 ports for large mechanical drives, two USB3 ports (yeah!), two variable speed fan jumpers (+ one single-speed jumper) And oh yes, really inexpensive! Dead simple installation with an I3-4130 and an 8-gig stick of ram, one SSD, and two 3.5" SATA drives. I attached the CPU and stock cooler with the MB on a flat surface, out of the case. Then I inserted the memory stick and installed the MB with 6 screws. The back ports shroud fit the case perfectly, the screw holes aligned perfectly. Installing fan, power, USB, audio, SATA and JFP1 connectors was trivial. Lots 'o room in the case with this small motherboard. Installed Windows 7 (which does not have the necessary ethernet drivers), then inserted the included CD and installed the missing drivers, and it was good to go. Also runs Linux Mint 15(which does have the necessary ethernet drivers)

Cons: The quick installation guide shows jumper layouts for JPF1 and JPF2, but the drawing is a bit ambiguous. However you can go the the "Manufacturers Product Page" and download the manual, and on page 22, in addition to the drawings, there is a link to a Youtube video that resolves any questions.

Overall Review: I can't speak to the overclocking capabilities due to CPU constraints. The graphical BIOS is OK, I guess. But I think the visual clutter clashes with the simplicity (from the user perspective) of the hardware. If I have a lot of information to visually extract from a screen, I want a layout that is also dead simple. Note this seems to be a drawback of all graphical BIOS systems from all manufacturers, not just MSI. After years of assembling my own workstations, (usually with fairly expensive, large, robust motherboards), I have become quite enamored of these really simple, small motherboards that are so much easier to configure and install.

Pros: -3 years, no problems -Able to overclock my i5 4670k -Excellent bang for the buck

Overall Review: When I purchased this motherboard at the end of 2013, it was simply because it was the cheapest board I could get that would fit my Haswell i5. 3 years later, and this board is still running strong. I have had zero problems with the board, and it has performed like a champ. I would highly recommend this board to anyone who, like me, is on a budget.