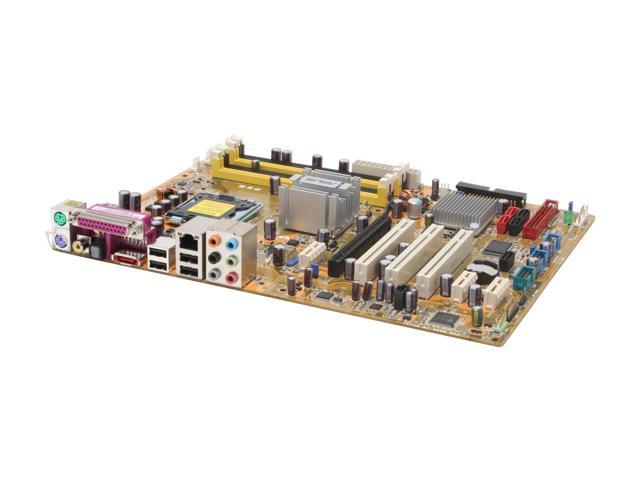 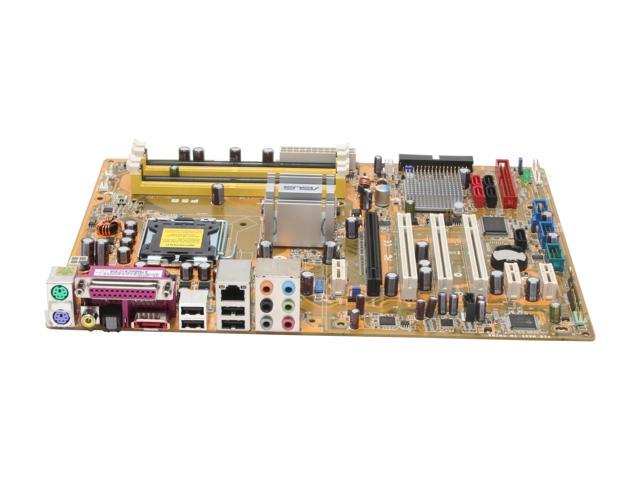 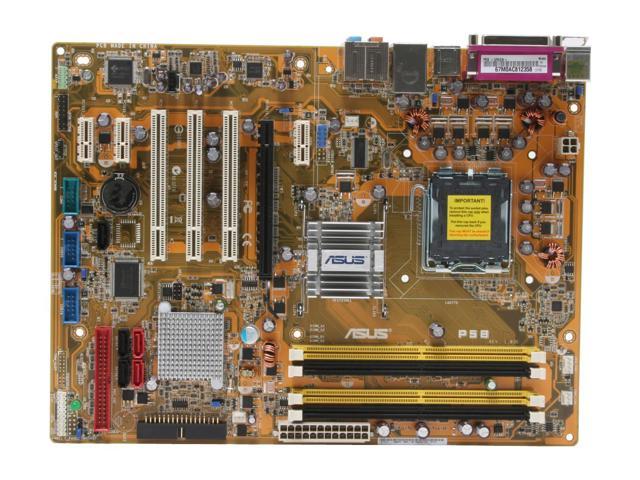 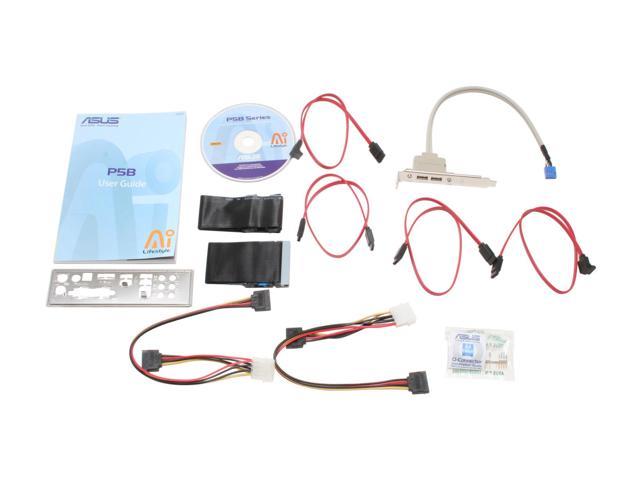 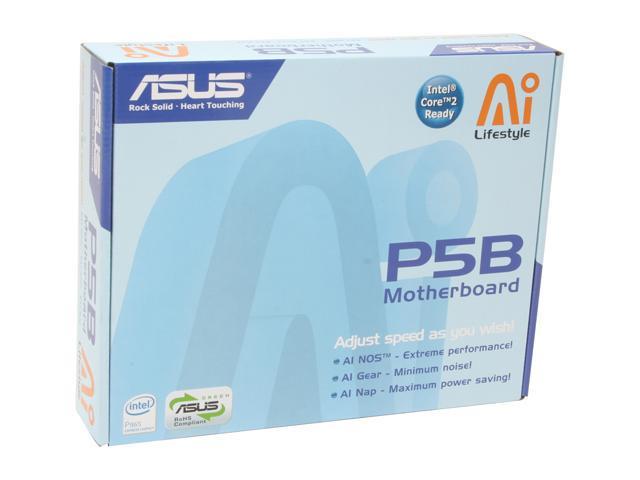 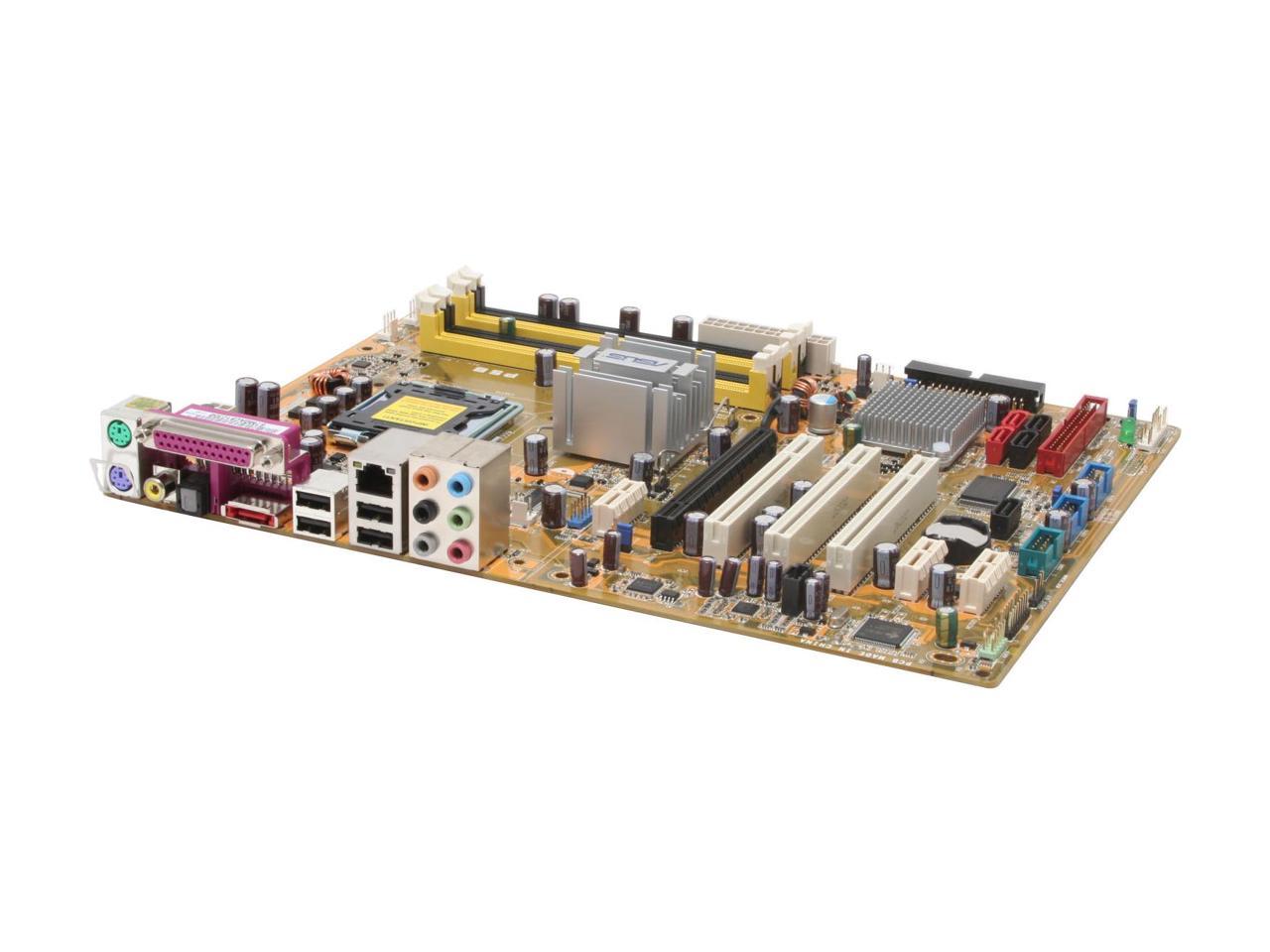 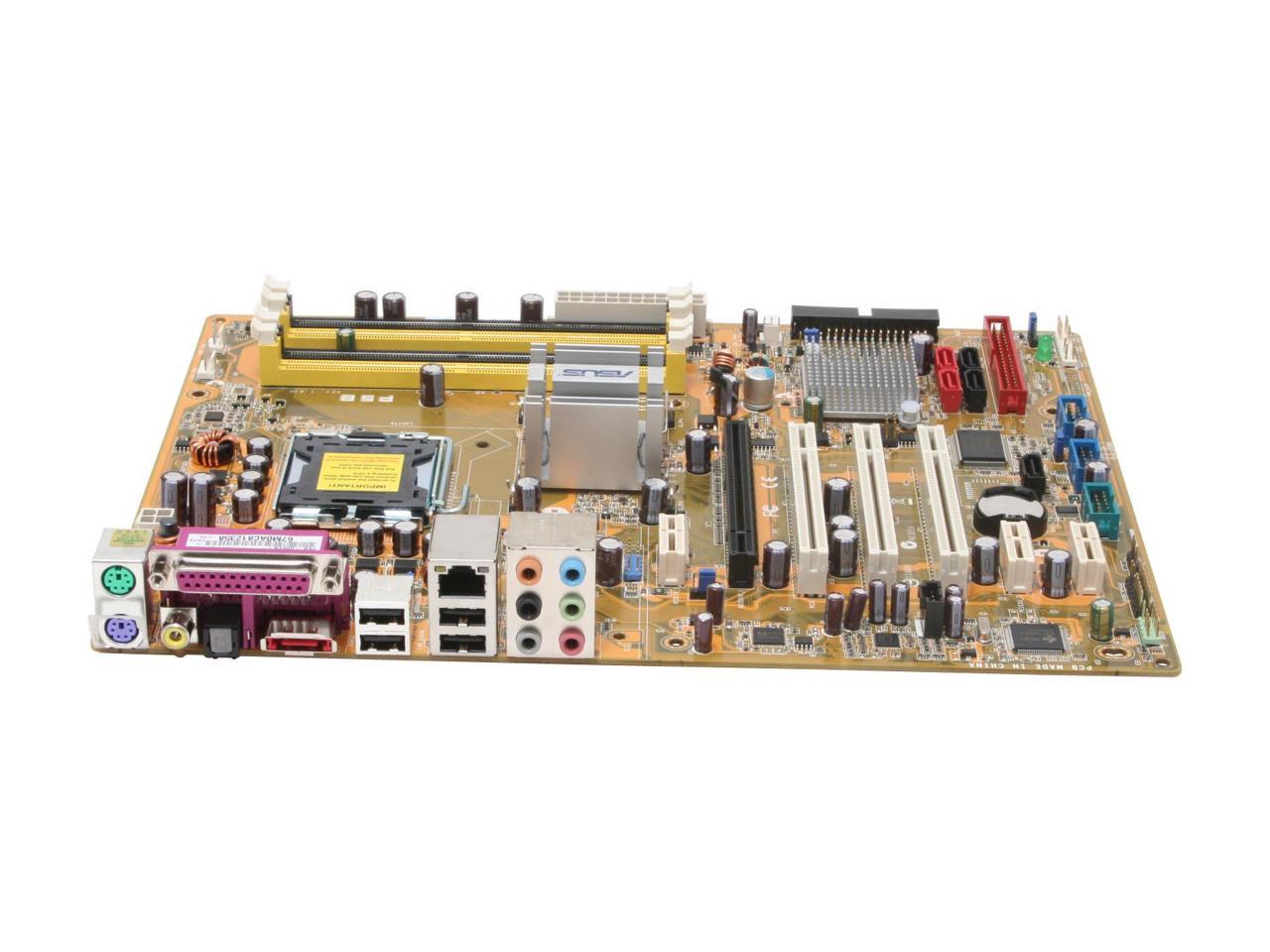 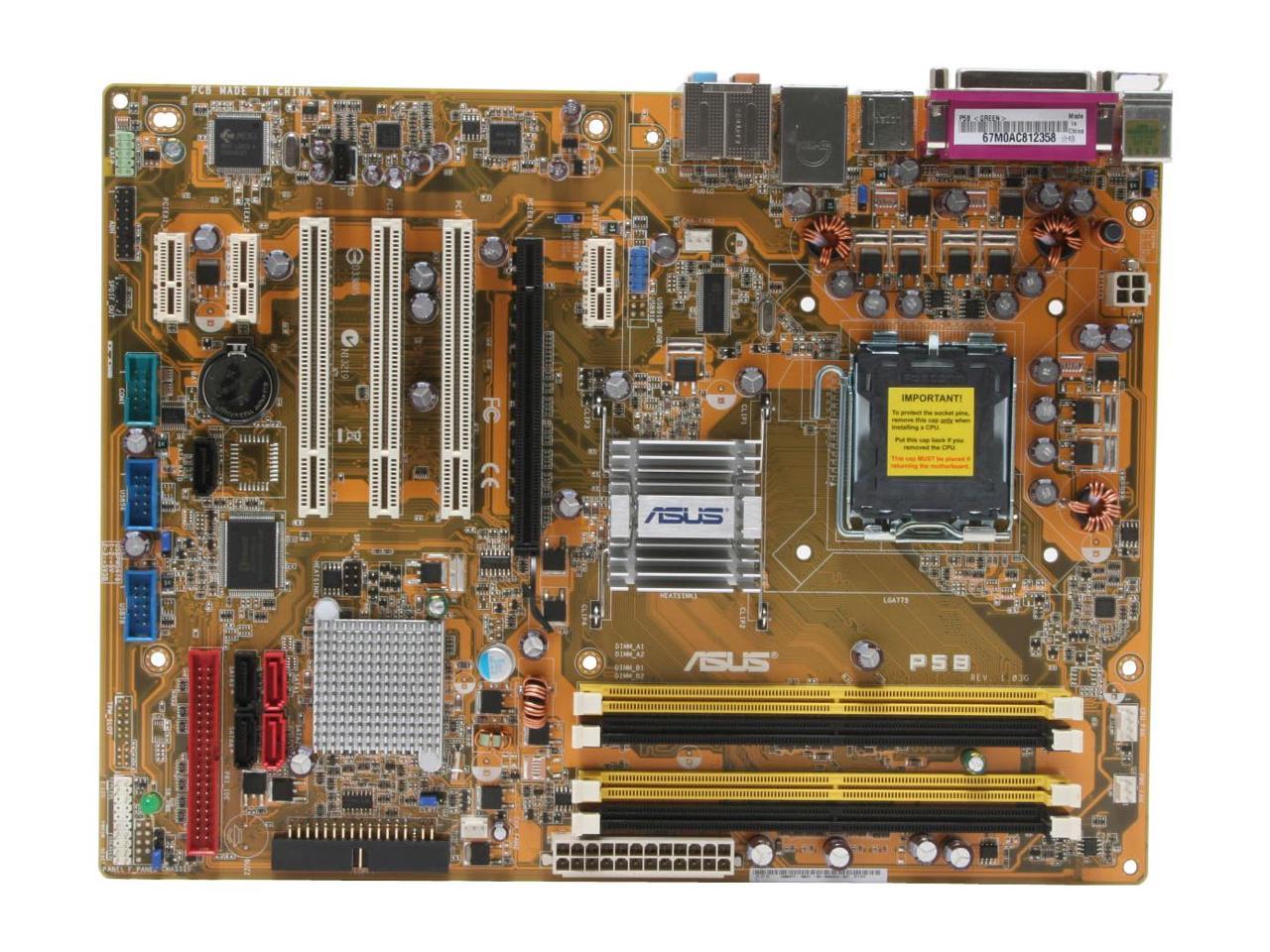 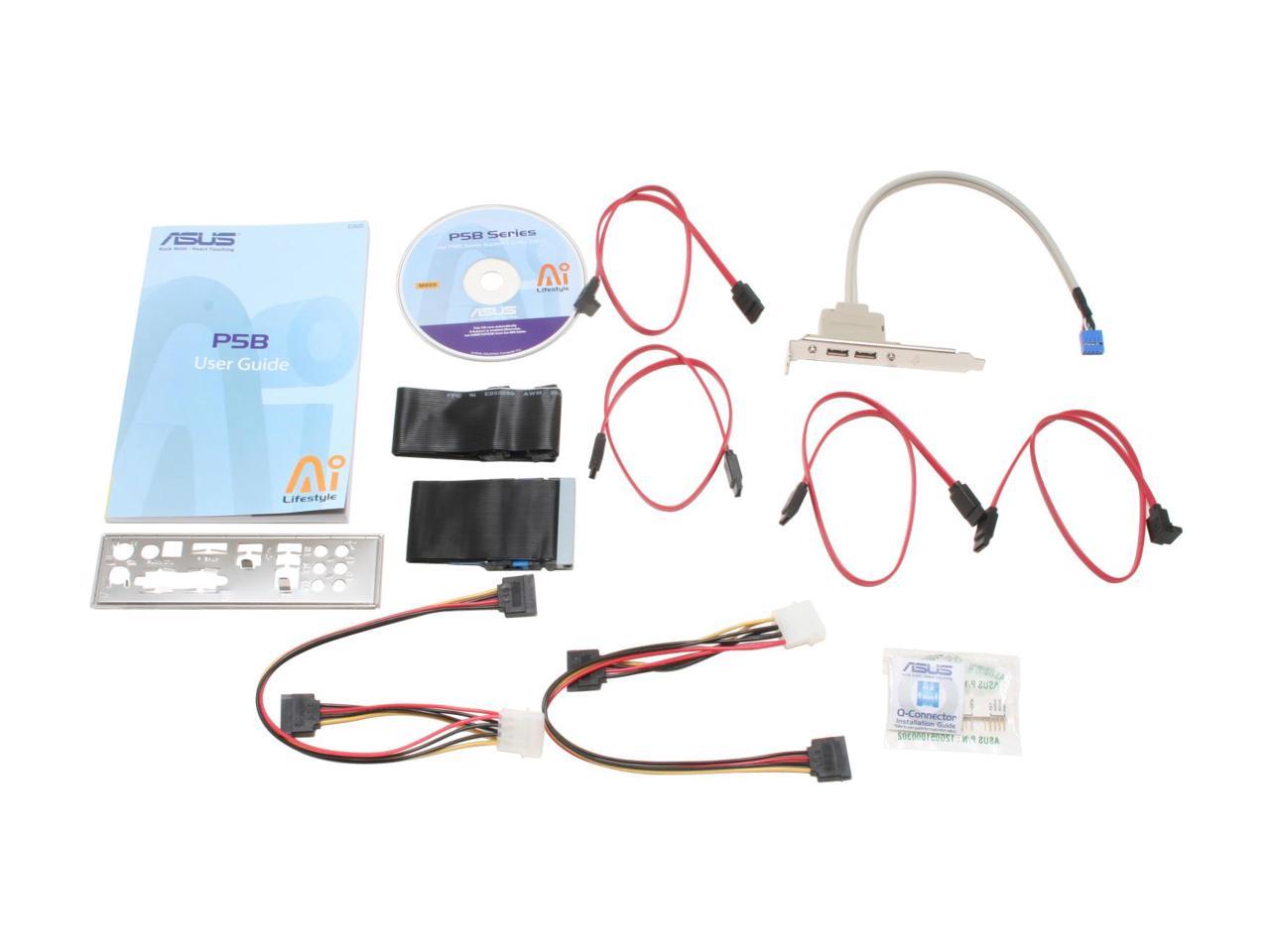 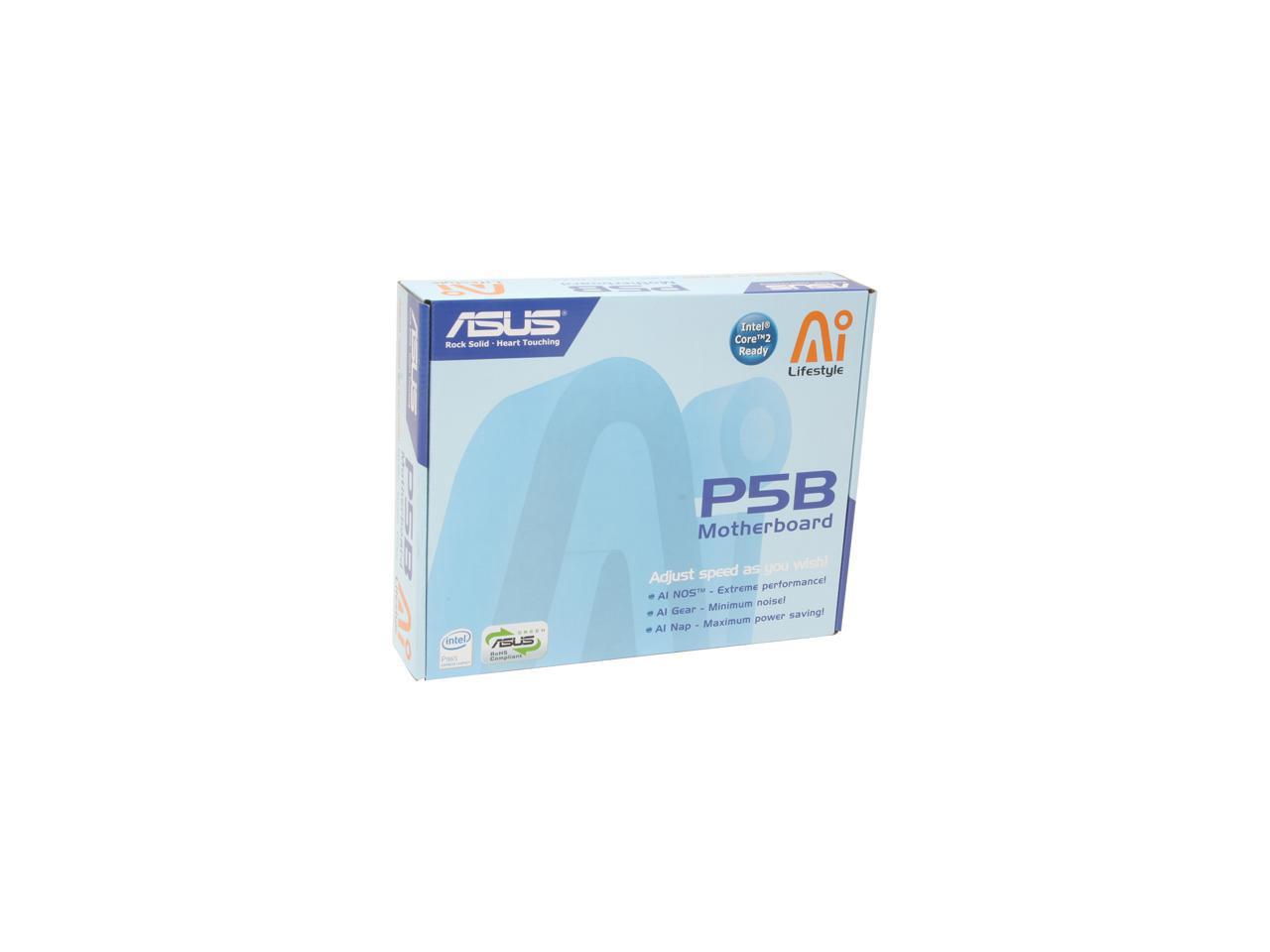 (282) Write a Review
OUT OF STOCK.
Overview
Specs
Reviews
Unleash the raw power of Intel's all-new energy-efficient Core 2 processors with the ASUS P5B motherboard featuring the Intel P965 chipset with unprecedented support for up to 8 GB dual-channel DDR2 800/667/533 memory with Fast Memory Access technology to deliver unparalleled system performance. Part of the ASUS Ai Life series motherboards, the ASUS P5B provides 6 SATA connections, PCIe-based Gigabit LAN and onboard 8-channel HD Audio to satisfy your storage, networking and multimedia demands.
The P5B Deluxe is already tweaked rather aggressively by default, and it has proven to be a noticeably faster motherboard when compared to a very similar product from another manufacturer. Great features, great stability, a great bundle, and it's all backed by the ASUS name. With exclusive innovations including AI NOS, AI Gear and AI Nap, operating speeds can be adjusted on the fly for superior power efficiency and minimum noise or for no holds barred extreme performance!

Learn more about the ASUS P5B

Pros: I bough this board to go with an e4300. It is advertised by ASUS as a great overclocker and I have certainly had no trouble over-clocking the e4300. It is resting at 2.8ghz (312 Bus Speed) right now with vCore of 1.25 (BIOS setting) with PC Probe II Vcore reading of 1.12. I've had it up to a stable 3.0ghz Orthos stable on stock cooling but being conservative I backed up and settled on 2.8ghz for the time being. I still had plenty of room to move up. The Mobo was certainly not holding me back

Cons: I had to flash the BIOS to version 0806 in order for it to fully recognize the Core 2 Duo chip. That was a painless process and I was up and running in no time.

Overall Review: Excellent choice for a budget minded tinkerer who likes to do some over-clocking, doesn't need on-board wifi and doesn't feel the need to take over-clocking to the extreme. That being said, I have come no where close to the limit on how far up I could take this Mobo/CPU combo. Just waiting for an after-market CPU heat-sink / fan before heading on past 3.0 ghz

Cons: highest ram voltage stil 2.1v but if u get good ram this aint a problem.

Pros: Seemed like a good motherboard when I bought it. Lots of features.

Overall Review: Whole experience has left me with any uneasy feeling about Asus, their products and warranties. will not buy Asus again.

Cons: This board tuned on and the fans and lights came on with no post beeps however there was no video output and it was totally useless. I sent it back for an RMA refund and now have another brand board which is using the same parts and functioning smoothly. This is the second time I have ordered an ASUS motherboard from newegg that had to be replaced.

Pros: If it worked, I'm sure it would be a decent board.

Cons: ASUS RMA process. Don't get me started. The quality's been going downhill a lot lately and they don't want to have to own up, it seems. The board was so bad and the RMA experience so terrible, I just trashed the board and vowed never to buy ASUS again.

Overall Review: DO NOT BUY!

Cons: Only one PCIe 16x slot, doesn't do my homework, can't make me dinner, and is responsible for many late nights playing games.

Overall Review: This was my first complete build in a while, and everything went together smoothly and is working great. I would recommend this motherboard to anyone who wants the best performance for a good price. Just get it. Excellent motherboard for the price. It supports everything that I could possibly want, and more. Has plenty of USB ports, BIOS support for RAID (haven't tried that one out yet), and all the other bells and whistles. I don't have to upgrade the firmware. Can't say how good the overclocking capabilities are because I haven't overclocked anything (I want to get the longest life possible out of my new compy). this mobo, E6600, 2GB G.Skill PC-6400, 320GB Barracuda, 256MB XFX NVIDIA 8500, Rosewill 550W, DVD burner, floppy drive (jk I don't have a floppy drive)

Cons: When using 2gig sticks this board does NOT support DDR-2 800Mhz speeds I have my ram @780Mhz and its fine (Using 2x2=4gig sticks)

Overall Review: Just thought I'd like to add that this board from the factory does not support 1333Mhz FSB However with a BIOS update to Version 1102 you can use the new 1333Mhz FSB e**50 CPUS

Pros: not sure, am returning this motherboard

Cons: This motherboard will not configure raid with two identical internal hard drives; I verified this with ASUS tech support. The documentation is deceptive, as it states both that it supports RAID 0,1 and that you must install two identical HDD into the drive bays. In actuality, you must have an internal and an external SATA drives (which I would not have termed "identical". I had purhased two identical internal Seagate HDD, so I am forced to return this MoBo in order to use them in a RAID configuration.

Overall Review: Choose a different motherboard if you intend to use RAID.