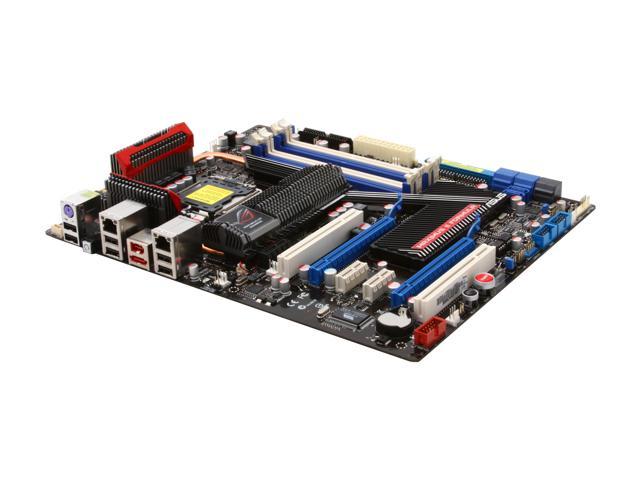 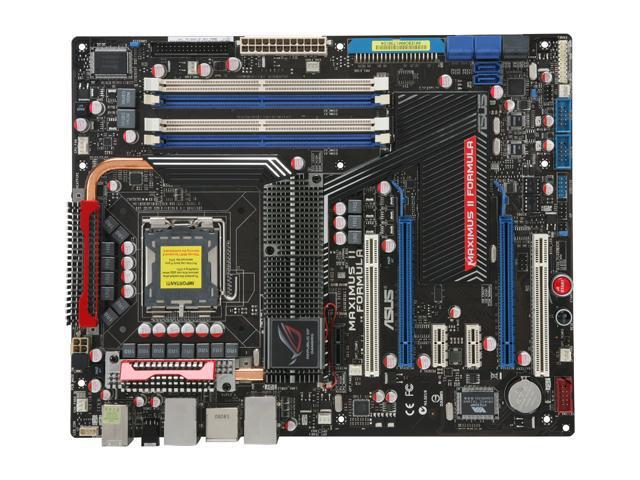 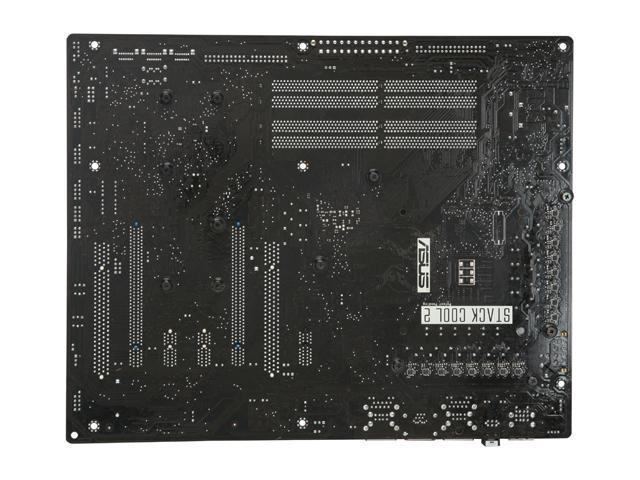 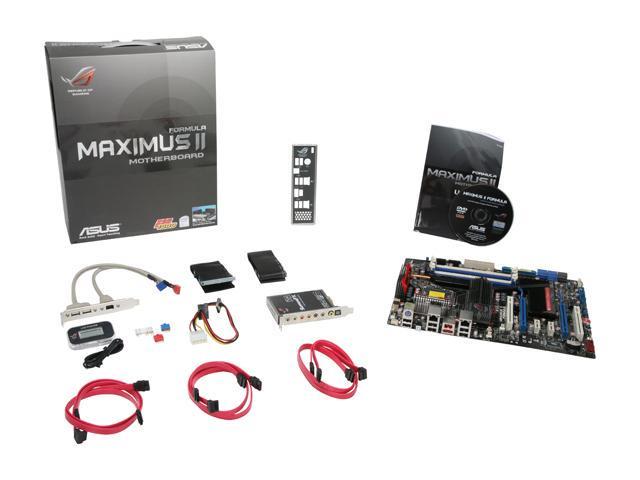 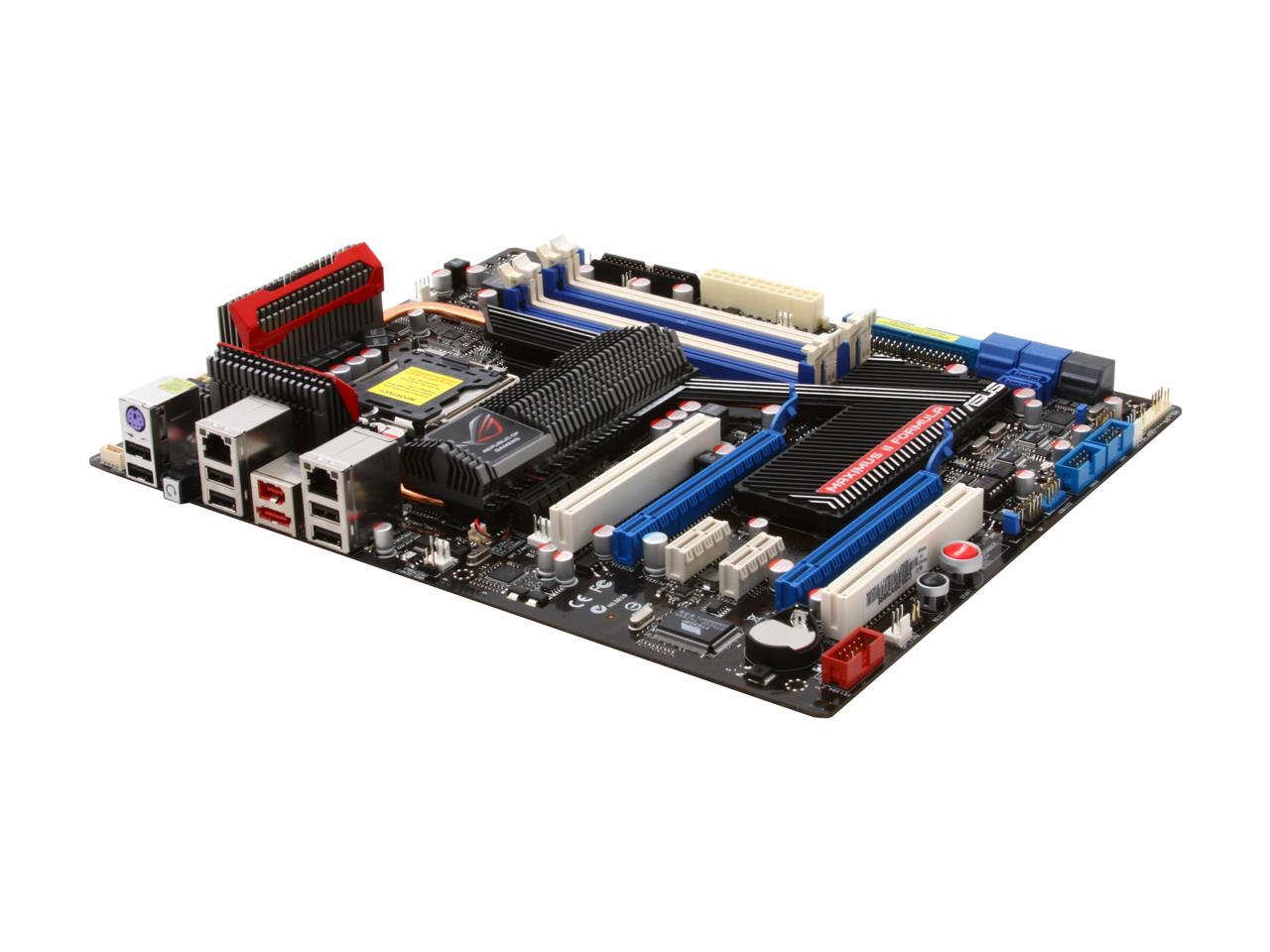 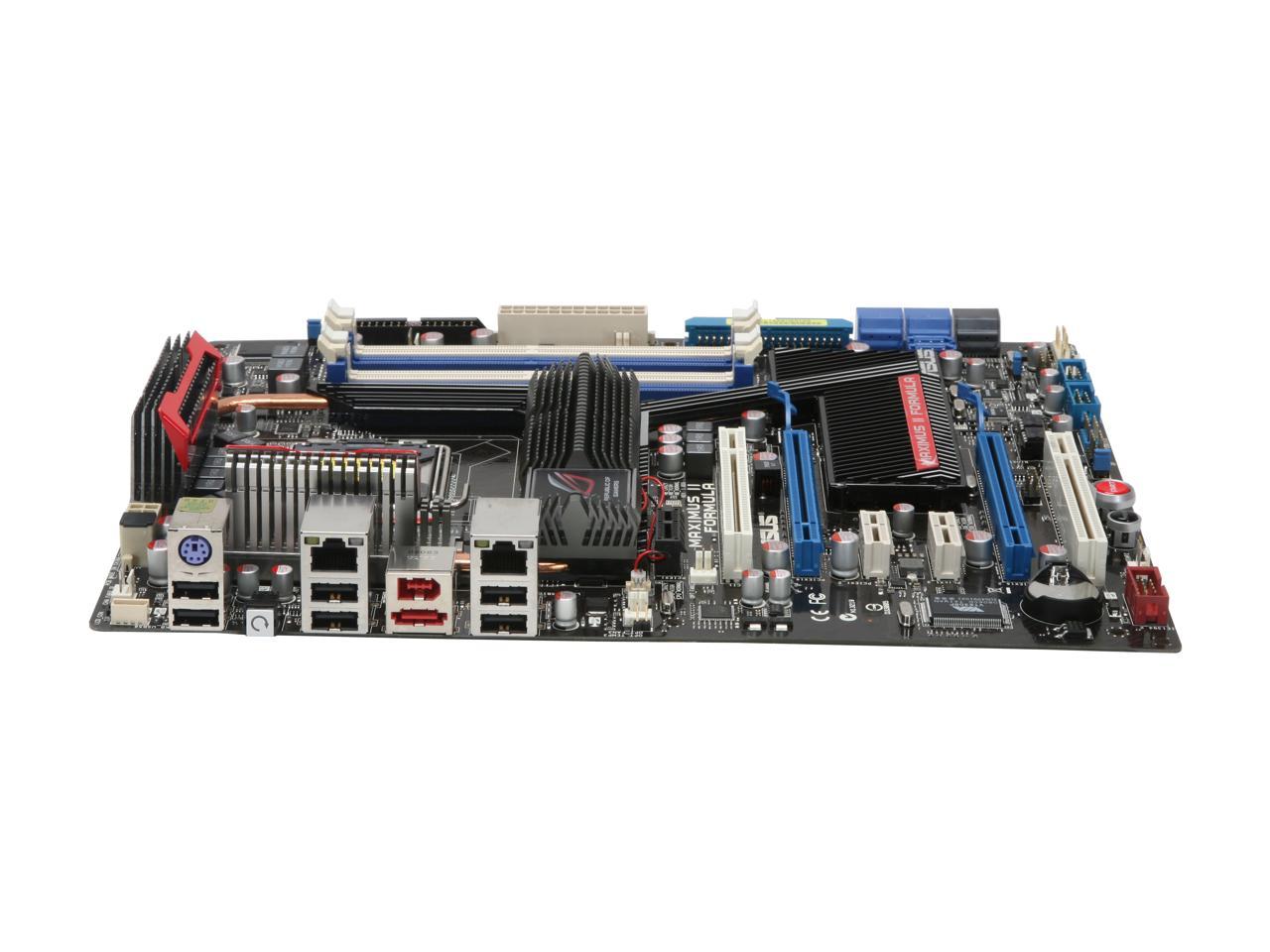 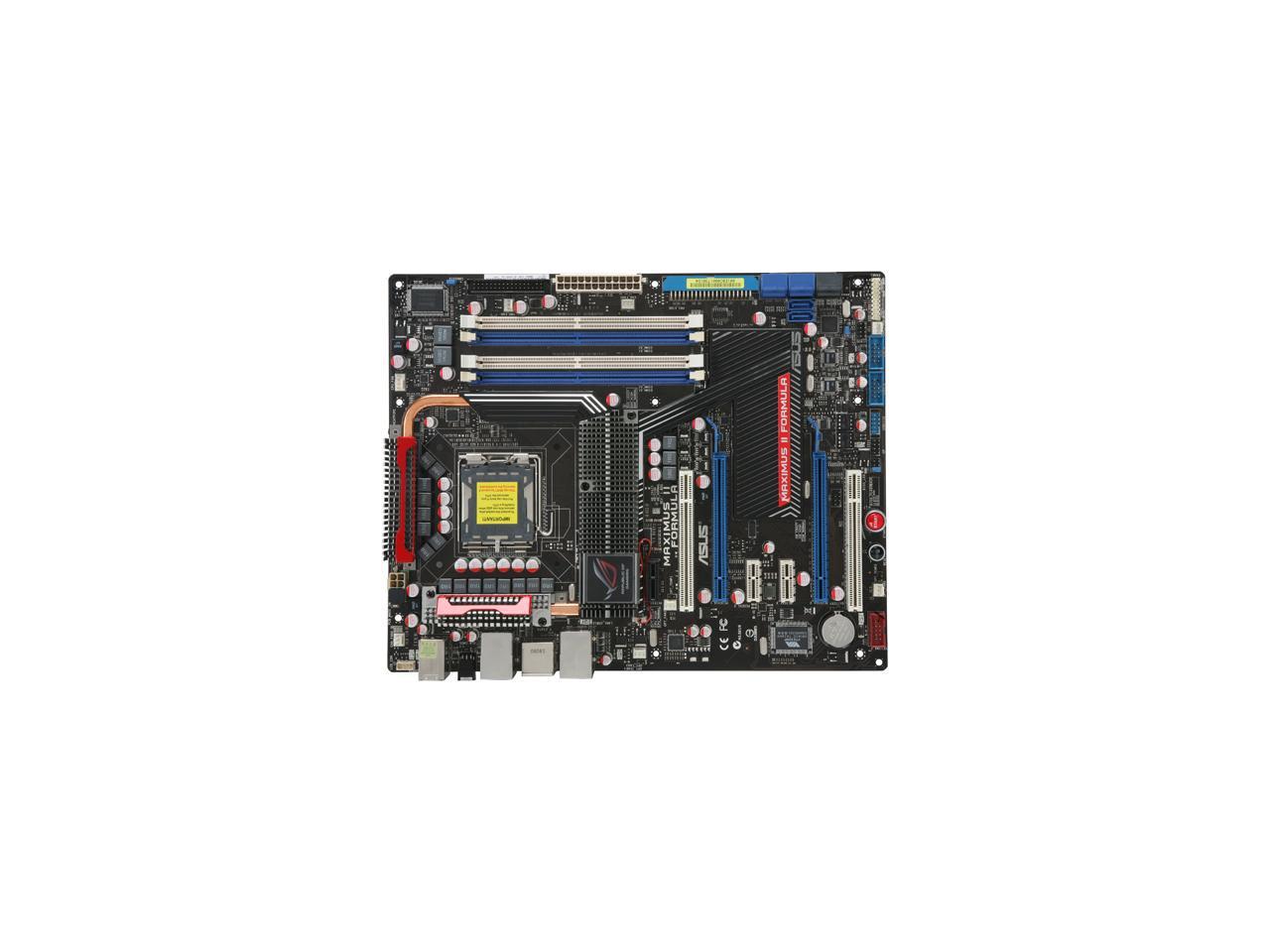 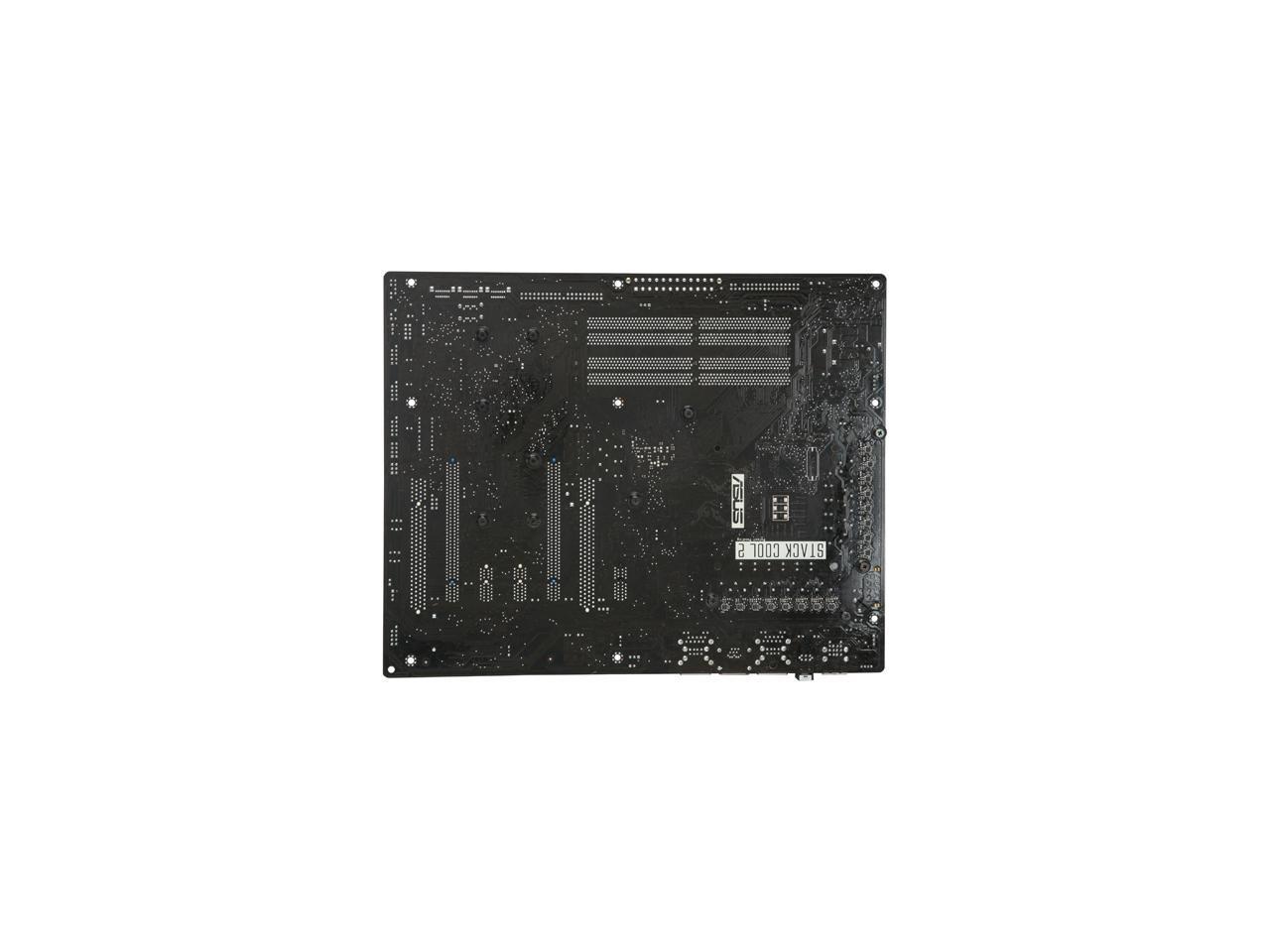 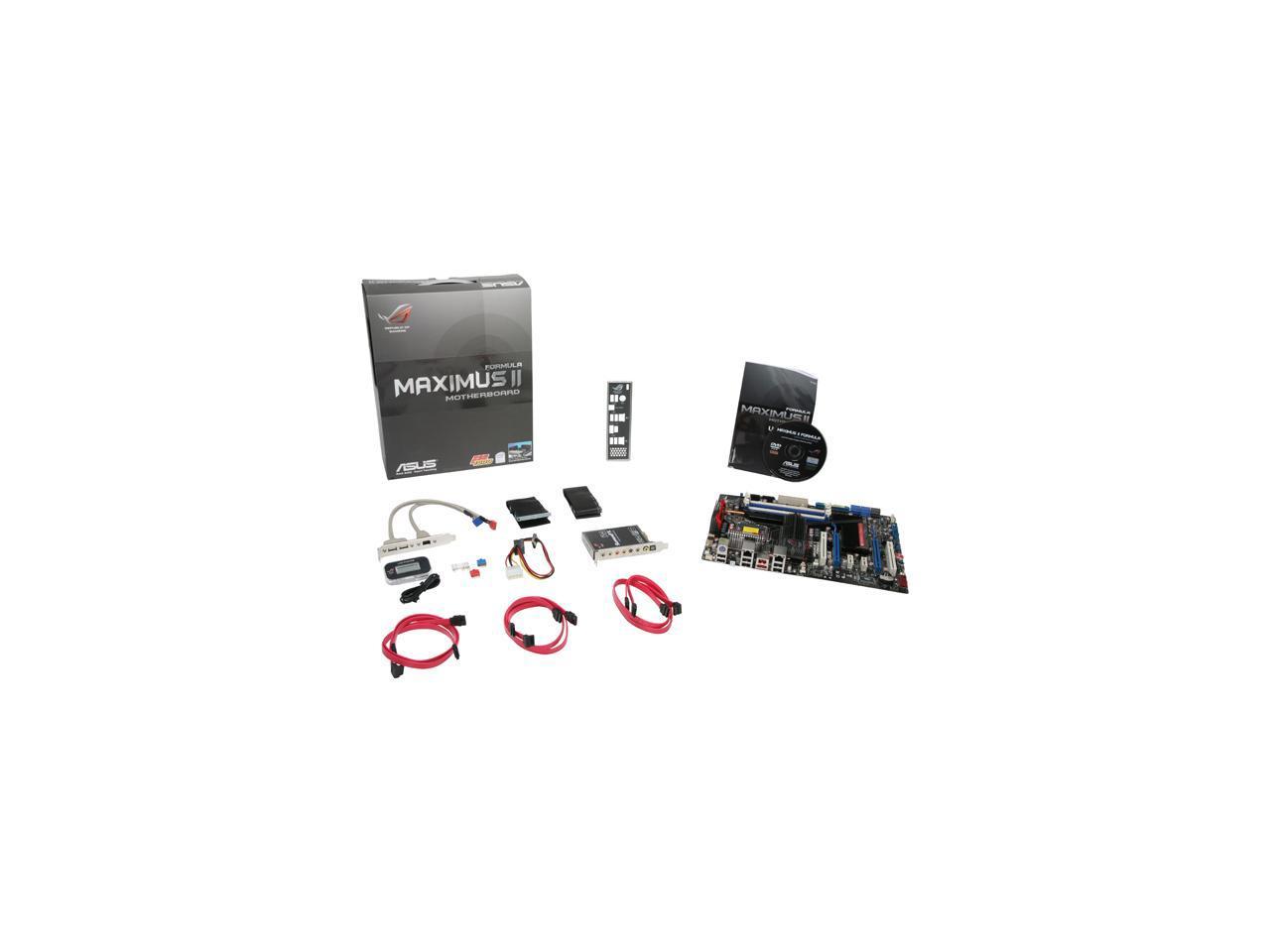 (204) Write a Review
OUT OF STOCK.
Overview
Specs
Reviews
Asus' ROG series motherboard takes an great reputation within the overclocking community and their Maximus II Formula motherboard continues the trend. Based on Intel's P45 Express and ICH10R chipsets, this ATX board is ready to host the latest LGA775 Core2 quad-core processors along with Core 2 Duo, Pentium D and Celeron CPUs.
Install up to 16GB of DDR2 1200 RAM for even greater performance. A pair of PCI-Express 2.0 x16 cards can be mounted for cutting-edge graphic power with support for CrossFireX. 100% all high-quality conductive polymer capacitors give longer life and higher energy efficiency by supplying power to vital components independently.
The Asus Maximus II Formula comes with a supremeFX X-Fi audio card to deliver games exceptional game sound with absolute quality. Connect up to eight SATA drives at 3Gb/s for high-speed data transfers as well as the option for multiple RAID configurations. Integrated dual Gigabit Ethernet LAN allows bottleneck-free connections to other network devices at broadband speeds and a half-dozen USB 2.0 ports allows for nearly unlimited possibilities in connecting peripheral devices.

Pros: sexy looking with lots of features, the bios is very good and has lots of options for overclocking, not that i have been able too as of yet!

Cons: the north bridge was heating to 82c out of the box! i was flabbergasted. all other indicators were running relatively cool, south bridge at 27c and Processor at 21c, but the north bridge was screaming! i found out after doing some research online that the cooling paste and/or heatpipe/heatsink assembly on the chipset is somehow inadequate! removed the whole assembly and stock heat compound, reapplied some arctic silver and tightened the assembly extra tight and everything was running cool, including the north bridge at a nice 30c, alot better then 82c at Zero load!. if you get this board be ready to do some extra handy work! also one of the RAM sockets produces memory errors! it took a few bsod's and a memtest to narrow that down. i would RMA the board but ya know what i can still play crysis smooth as butter with all settings max and thats with no overclocking yet, this thing better not give me any more trouble or its being sent back!

Pros: This Motherboard is still going strong, after 6 years. I actually purchased 2 of them, and they are both still operating well. One, with an overclocked Core 2 Quad Q9650, and the other with the Core 2 Duo Wolfdale. No issues on either Motherboard after all this time.

Cons: The technology is dated now, with no SATA III, or USB 3.0. You could install an M.2 SSD in a PCI-E X4 slot though, and you can purchase a PCI-E USB 3.0 card, so, with a decent Overclock, you can still have a killer system.

Overall Review: I thought this was one of the best P45 chipset boards. Sure, I have had the Z68 and Z97 boards since then, and they are nice, but this one will always have a special place in my own memory. Great, great, Motherboard.

Manufacturer Response:
Dear Valued Customer, We are sorry for this inconvenience. Please let us know if we can assist in the RMA process by contacting us at http://vip.asus.com/eservice/usa_rmaserv.aspx Best Regards, ASUS Support Team
Anonymous
Ownership: 1 month to 1 year
Verified Owner
5/16/2009 9:39:44 AM

Cons: All but one SATA port stopped working about a month after installation. Review of several sites and reviews reveals that this board has a LOT of SATA problems. Since it had been more than 30 days (just barely), I was out of luck with newegg and ASUS tech support makes dealing with Comcast's notoriously horrid customer support seem like a real pleasure. NB/SB run a little hot, but this is fixable by disassembling, applying new thermal paste (think Arctic Silver - anything less probably won't do the job on this board). Price: on a $250 motherboard, there should never be this kind of problem with the SATA ports, nor should it be necessary to disassemble the board and re-apply thermal paste.

Overall Review: I've been using ASUS products for years, but after my experience with this board and with ASUS' bluray drive, I'm so disappointed at the decline in quality that I probably won't touch ASUS again. This board has some of the shoddiest workmanship it has ever been my displeasure to experience when dealing with any company.

Manufacturer Response:
Dear Valued Customer, We are sorry for this inconvenience. Please let us know if we can assist in the RMA process by contacting us at http://vip.asus.com/eservice/usa_rmaserv.aspx and reference case number "NE367618". Best Regards, ASUS Support Team
Vince M.
Ownership: 1 month to 1 year
Verified Owner
P45 to the MAX9/10/2008 8:10:32 AM

Pros: This board is the heart of my gaming rig and supports my OCZ 1150MHz ram past 1200MHz, my E8400 to 4.2GHz (on H2O), normal or easy RAID options on-board and has everything a O.C.-happy system tweaker could dream of at your fingertips in BIOS.

Overall Review: Newegg kindly waived a restocking fee on my previous Asus board (P5Q Deluxe) because I couldn't use the onboard sound and my SoundBlaster blocked the air to my graphics card. That's solid customer support and earns my business again and again.

Pros: I haven't owned this board for long so I can't say much for long-term stability, but so far this thing works as advertised. I'm really impressed with all the bios options, it booted up first shot, raid 0/raid 1 is RIDICULOUSLY easy to setup - there are two sata ports marked for it. You just click an option in the bios, done. No raid drivers, nothing. Good memory support, the x-fi sounds good, and its the best looking board ive ever seen. (The x48 rampage extreme will soon change that.)

Cons: Price. X48 boards cost about as much (or less), but I don't know of one that presents this feature set. The only thing this lacks is the dual pci-e 16, otherwise we're basically talking about the same hardware. So if you're buying on extras definitely get this.

Overall Review: You know what, its probably my video card, but it deserves a mention. My 9800 gtx in cod4 has to be underclocked to not artifact every so often. Didn't happen with my 790i. Compatibility problem or bad timing? Dunno.

Pros: This motherboard is extremely satisfying to run with. Bios settings are extremely flexible and allow for all kinds of experimentation without inconvenience should you become too aggressive. Mine came up perfectly at first power-up and ran smoothly with all my other hardware. No issues loading XP/SP2 and all hardware detected perfectly with the supplied drivers. No problems with running any games I have thrown at it. It will run endless loops of Orthos or any other stress you care to subject it to. The provided soundcard is awesome. I am very pleased with the layout, the design features, and the performance of this motherboard.

Cons: I had one issue previously mentioned in the reviews. I was alarmed to see my northbridge temperature sitting at 62c when idling, and rising to 77c under load. The massive one-piece heatsink/heatpipe assembly was stone cold as this was taking place. Not too hard to figure out what was going on there. I took my system apart and removed the motherboard. I removed the northbridge heatsink assembly (all the spring loaded screws under the motherboard) and found from the thermal compound transfer that it was barely making contact with one corner of the NB chipset. I added a tiny amount of arctic silver to the Northbridge and Southbridge chips and remounted the heatsink/heatpipe assembly paying close attention to the tightness of the 2 springloaded screws at the NB. After reassembling everything the NB idles at 40c and rises to 52c at full stress. Problem solved completely.

Overall Review: This is an amazing board that I am pleased to have purchased. I am running it with 2G of OCZ 1066 Mhz DDR, which the bios detected to run at 667 Mhz. I had to set that manually to 1066 Mhz but expect that updating the bios would correct that. My CPU is a 3 Ghz E8400 Wolfdale, Graphics card is an Nvidia XFX 9800GTX, drives are 2 x WD SATA and a Lite-On SATA DVD/CD burner. PS is a Corsair 650Watt. The case is a Lian-Li PC-60 Plus. I would not hesitate to recommend this product to anyone, just check that NB heatsink/heatpipe to make sure good contact is taking place!

Overall Review: Price is right, performance is outstanding. IF your looking for the best P45 board this is the one..