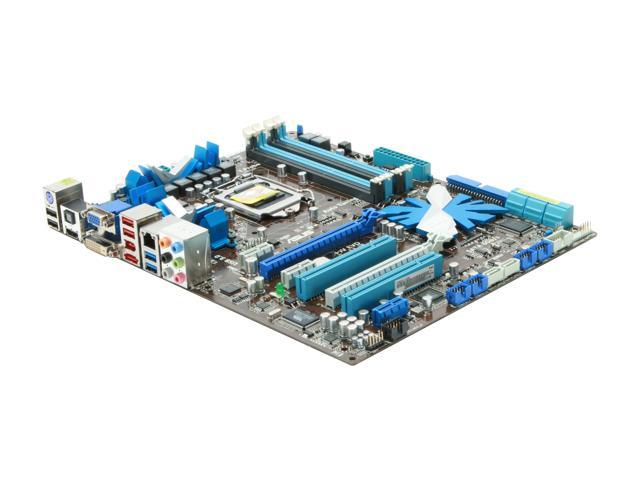 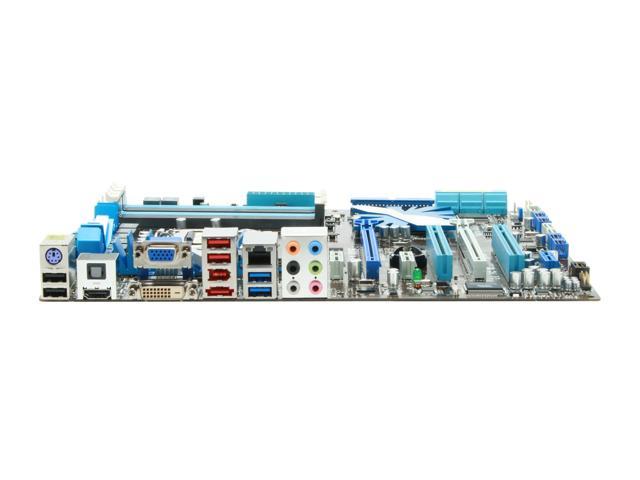 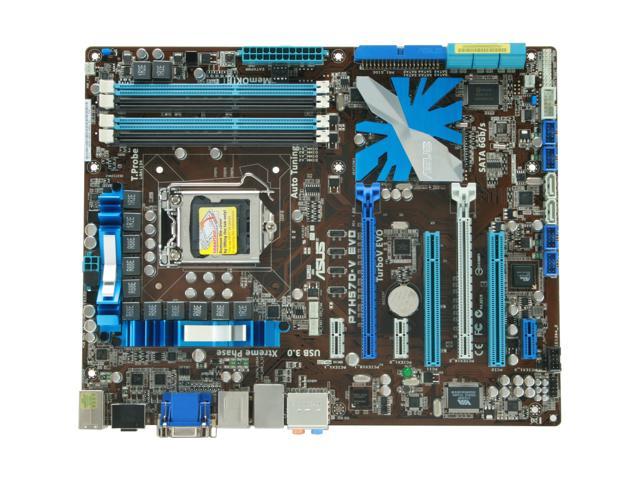 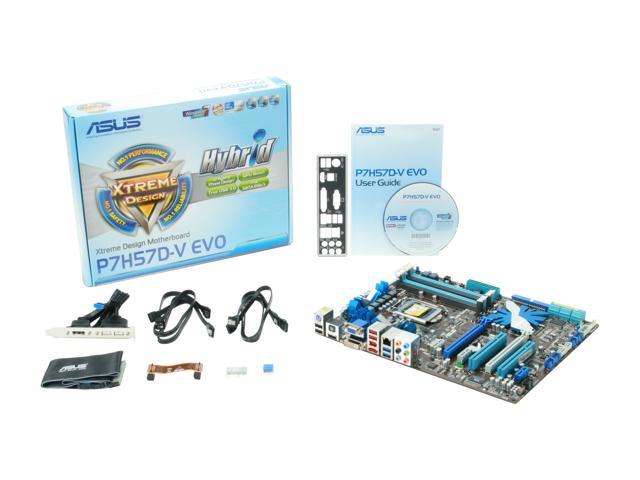 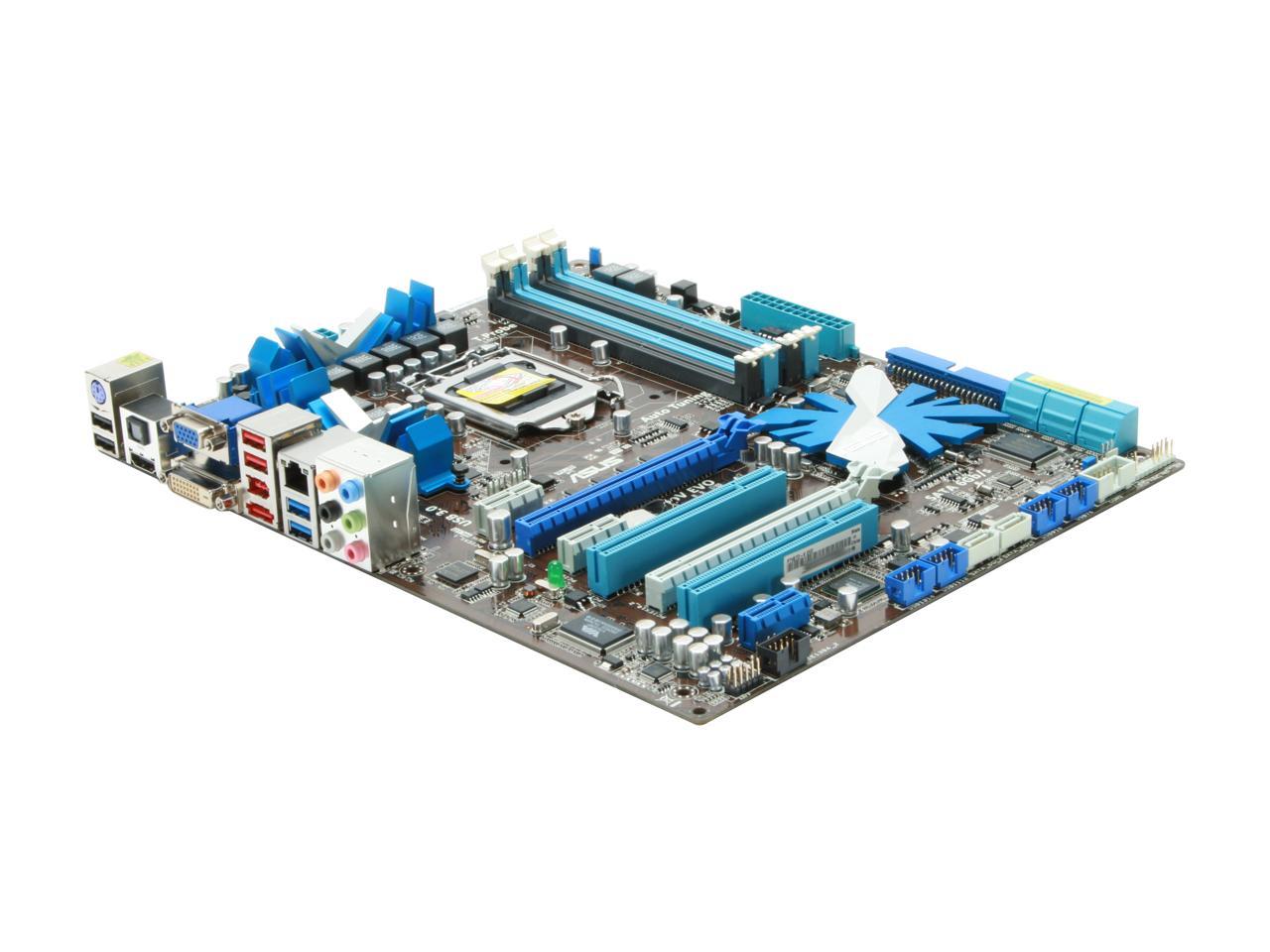 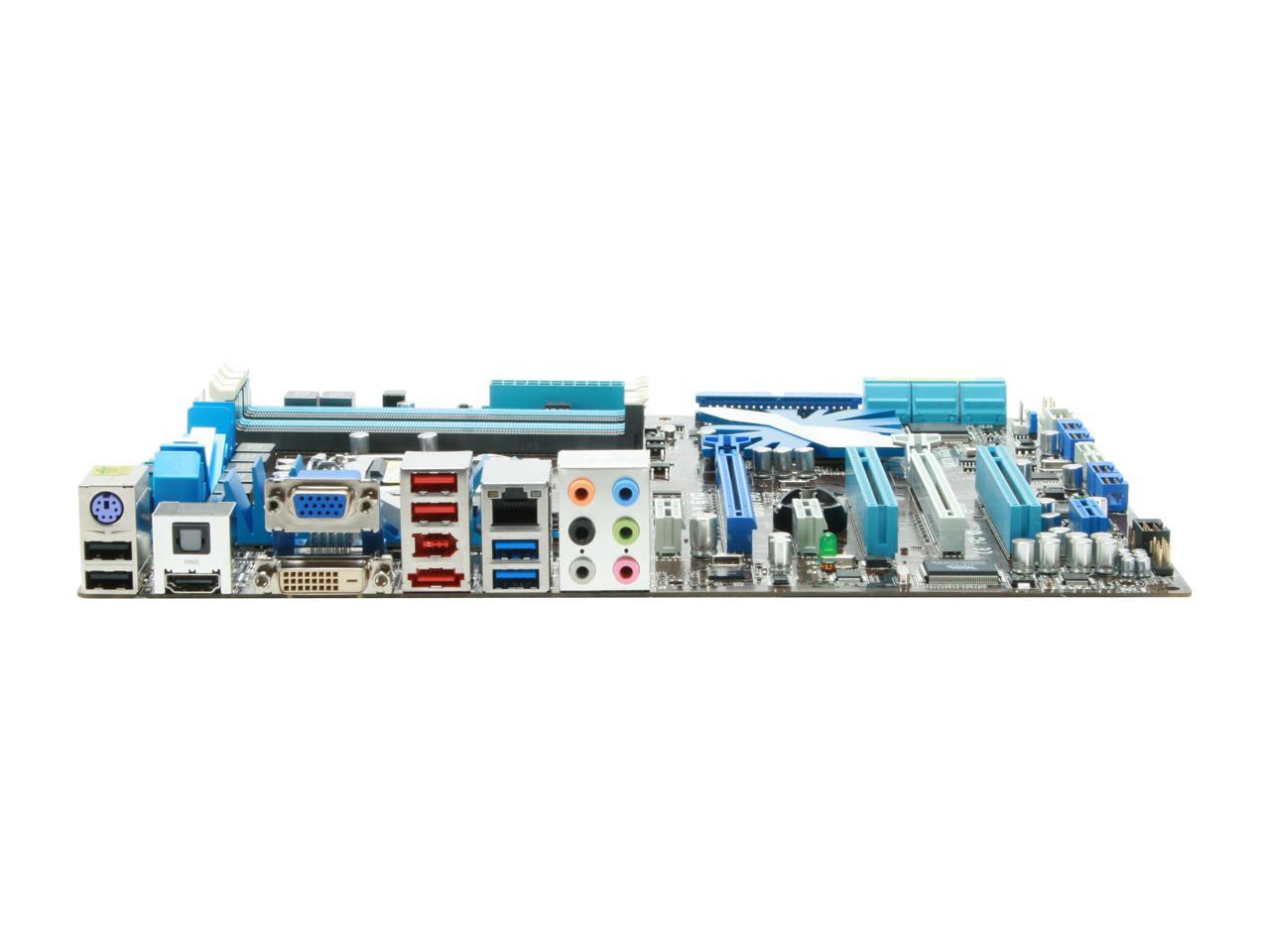 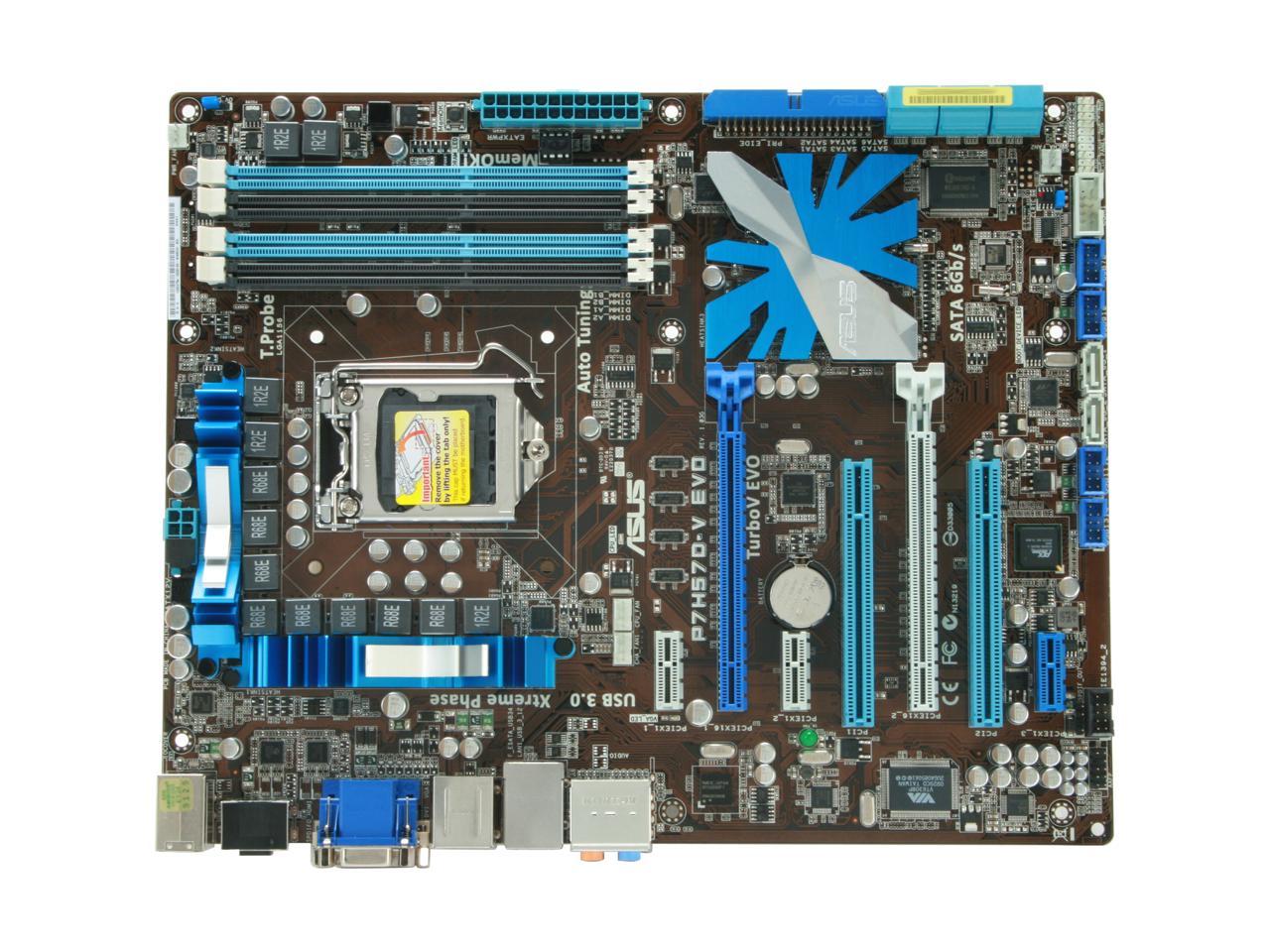 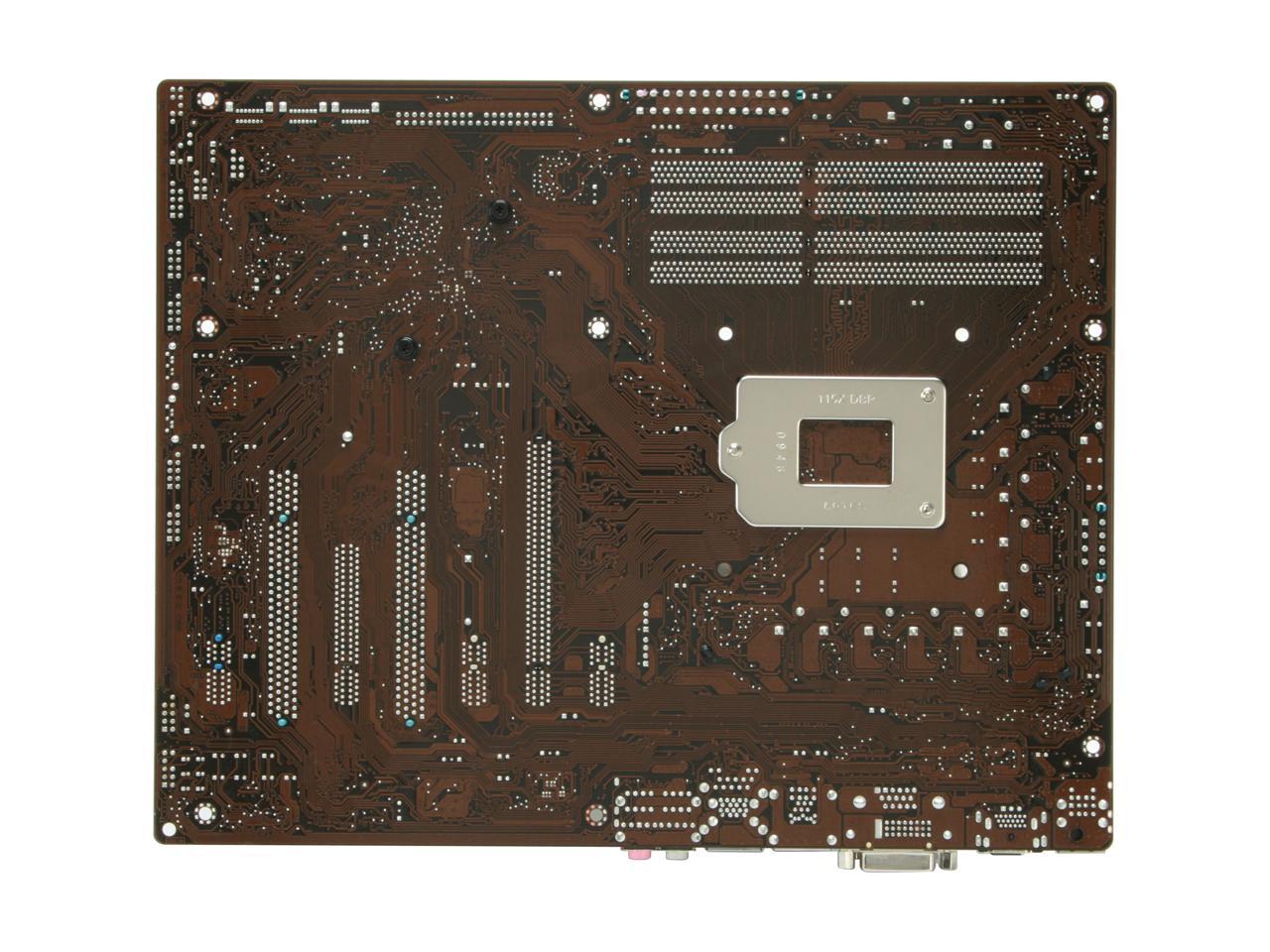 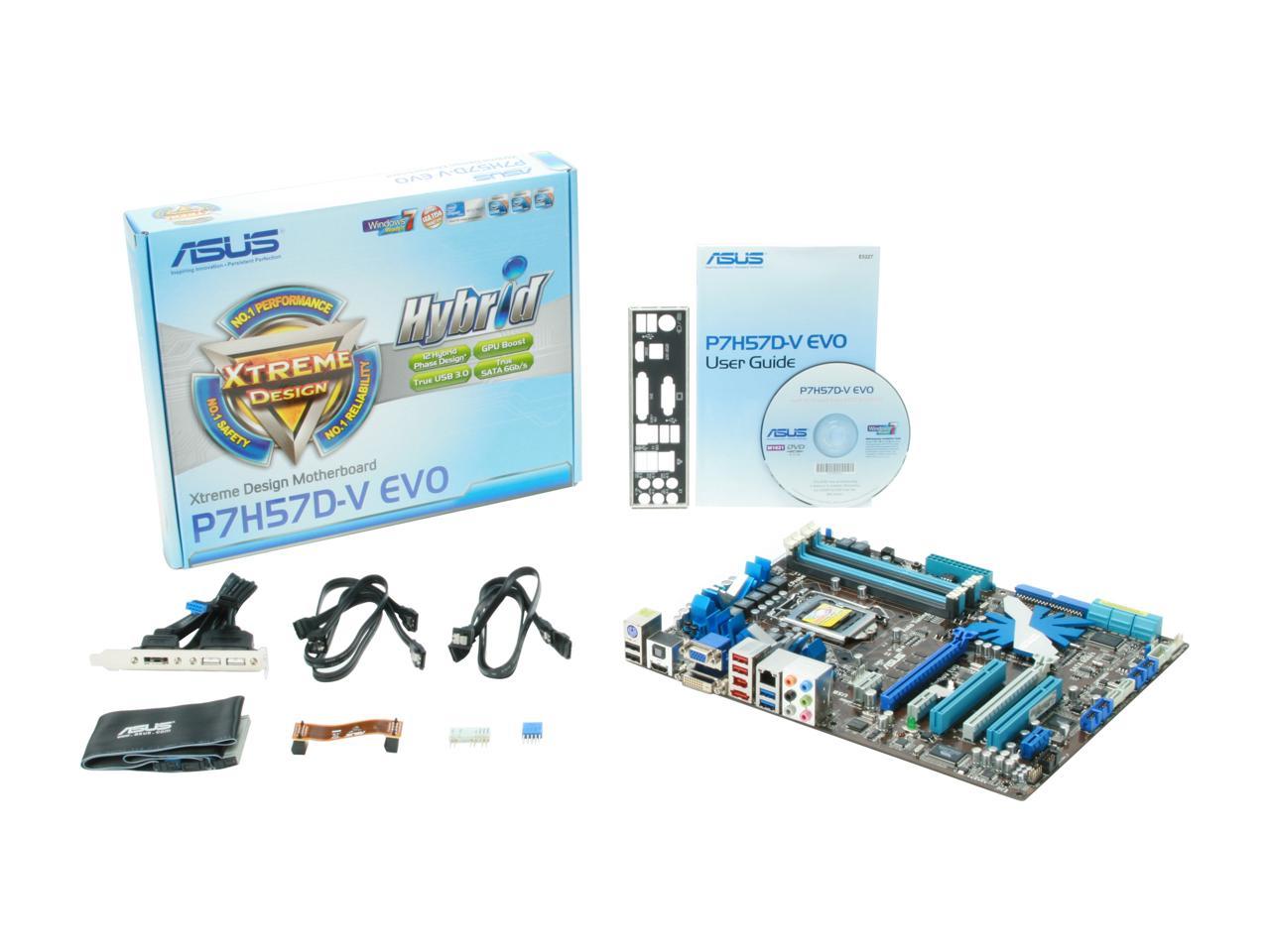 (37) Write a Review
OUT OF STOCK.
Overview
Specs
Reviews
ASUS, the greatest manufacture of motherboards in the world, has brought us the new model - P7H57D-V EVO, which is base on Intel's new H57 chipset.
This motherboard, which goes with Intel H55 chipset, supporting the latest Intel LGA1156 CPUs (Core i7/Core i5/Core i3) including the Intel Clarkdale processors with integrated GPU, outputs 2D and 3D images without an independent graphics card. To match up the sharp CPU speed, Dual-channel DDR3 memory up to the rates of 2133 (O.C) is supported. P7H55-M Pro also supports PCI-e 2.0 for twice the speed and bandwidth which enhance the performance. Adequate VGA output ports such as HDMI and DVI fulfills your 1080P high-definition movie requirement.
Overclocking features boasted by ASUS, like GPU Boost, ASUS TurboV and Turbo Key utterly levels up your system. Meanwhile, ASUS also focuses on power saving and noise reduction with ASUS EPU and ASUS Fanless Design/Fan Xpert. P7H55-M Pro provides 8-channel audio as well as S/PDIF-out on back port for alternative audio solutions.

Pros: USB 3.0 Controller (NEC) with 2 Ports, 14 USB Ports in Total, supports Core i3/5/7 CPUs with integrated graphics, comes with 4 S-ATA Cables of which 2 are angled, supports both nVidia SLi and ATI CrossFireX, even still has a COM Port, positioning of all connectors good, MemOK button that will try to find good settings for the RAM in case the machine doesn't boot with the settings, supplied "Adapter" between tower LEDs/switches (Reset, HDD Led etc.) and the mainboard to avoid having to fiddle with them (Am I the only one who always forgets them until everything else is built in, which makes it near impossible to connect them on any mainboard because it's too crowded? here you get a "block" where you connect the cables to, and then you put that block on the headers on the board)

Overall Review: For those wondering about the graphics: In the Core i3/5/7 series, Intel added integrated graphics into the CPU (not on all models!), so the Mainboard needs to supply the outputs. If you use a CPU without integrated graphics (i.e. the i7-8xx) then the outputs are useless. So make sure to get a Graphics Card. Also, the Board has 2 additional S-ATA Controllers. The Intel Chipset supplies the 6 onboard S-ATA 2 Ports, an additional Marvell controller supplies the IDE and e-SATA Ports, and a second (different) Marvell controller gives us 2 S-ATA III ports (grey). Note that there are 4 USB Headers on the board for a total of 8 ports. Sadly, the Mainboard only has a slot cover for 2 of them, so prepare to have 1 or 2 not connected. Plenty of S-ATA Ports. I haven't tried the Overclocking options (not into that), although there are plenty offered. SLi/Crossfire has the usual 1 x16 or 2 x8 limitation. Gigabit LAN of course. No problems.

Pros: Haven't yet experienced any pros!

Cons: Board ships with a BIOS version that isn't compatible with MOST of the CPUs it supports!

Overall Review: I checked in advance to make sure this m/b supported the Core i5-661 Clarkdale processor, but ultimately couldn't get the system to recognize it Turns out that 9 of the 12 CPUs this board supports require BOIS version 0503, but all of the boards are shipping with BIOS version 0401! Ever try to flash your BIOS without a working CPU? It's impossible! Opened a case with Asus. They said the BIOS chip is removable, but they didn't have one on hand to send me. Had to RMA the entire m/b to have them flash it. It's been a month since I purchased all the parts for my new system and I'm still waiting for Asus to return my m/b with the updated BIOS. Meanwhile, if any of the other components I ordered from NewEgg are DOA, I'm stuck dealing with manufacturers directly 'cause my return window is gone. I'm not happy! I'll consider changing my rating if and when I finally get things working to my satisfaction. In any event, this has been a ridiculous experience.

23 out of 23 people found this review helpful. Did you?
Manufacturer Response:
Dear Valued Customer, We sincerely apologize for this inconvenience. Please contact me at OC_Support@asus.com and reference case number NE0359. Please provide me with your RMA number so that I may follow up with the repair status and give you an update. Best regards, ASUS Support Team
Jay C.
Ownership: 1 month to 1 year
Verified Owner
Solid and Sound after cpu fix5/27/2010 5:38:13 AM

Pros: My CPU was the problem after all the fuss. I new I liked this board when I first read about it and found most reviews favorable too. This is my third review posting after buying this board here and should be my last. Let me summerize "The Motherboard is a CHAMP!". Solid and stable.

Cons: Better memory recommendation documentation or QVLs (i.e. which cpu model clarksdale or lynnfield, and tri-channel memory should not be listed if we can't use it)

Overall Review: I have learned that I do not know as much as I thought I did. I should complain to ASUS since I first purchase a 6gb memory part fro their QVL and whenit arrived I discovered it was tri-channel memory and I had to ship it back. I next bought memory from their list that was dual-channel , it arrived and I installed and after the PC crashed a few times, I realized the QVL I look at was for the Core i5 lynnfield cpu not my Core i5 clarksdale cpu. The memory for lynnfield cpu has Higher Voltage and ruined my Core i5/661 processor. Clearer documentation would have helped alot in the beginning although ASUS did replace my motherboard in hopes of finding the problem during the troubleshooting months. Intel replaced my CPU for free even when I toild them I caused the damage by installing the wrong memory (hint ASUS from your P7H57D-V EVO memory compatable list). How about a Core i7-860 and a SATA III 6Gb/s 10000 or 15000 rpm HD and SSD boot drive? ($) Well, maybe just Core i7-860

Overall Review: Not sure what the BIOS fuss is all about. The board came with 0401. Put 0503 on a USB flash drive and used the ASUS EZ Flash 2 update from within the bios setup to flash it. No floppy or OS needed.

Pros: New technology has its learning curve. That said, here’s the story. Looked through the specs. to find out what ran on the motherboard. Right processor, check – right memory speed and counts, check – power supply has right plugs and enough power, check. Got her home, assembled it, and Walla won’t boot. Looked in the book and didn’t find the ram I purchased on the list, so I sent the ram back and got some that was on the list. Put it in, Walla won’t boot... Hmmm. Called Asus. We determined it was either the motherboard or the processor. Well, in 27 years of working on computers I have never had a bad Intel processor so, gota be the motherboard. Got the new one, changed everything out, and Walla – won’t boot. Hhhhhaaa (inhale / exhale). I thought to myself, Frisbee... No, relax, keep your cool... sent the processor back and got a new one. Installed it, (thought about grabbing a beer 1st), but you would be proud, I didn’t. Plugged her in and Walla BOOTED UP LIKE A CHAMP.

Cons: Just took 2 extra weeks with all the shipping 3 days each issue... Good patient customer... I wish newegg would list memory specs on the specifications list to save a web search on the MB.

Overall Review: 1st bad Intel processor. No buddy's perfect. New Egg handled that - 5 stars! Great company to work with! Cheaper than my wholesalers, better web site, no minimum order, great RMA, faster service, don’t charge a fee to use a credit card. What else can I say... Outside of loosing 2 weeks, my experience was excellent. Ten stars for these guys at Asus! Awesome !!! Spoke good English, very intelligent, very helpful, answered the phone within 15 seconds. Every time I called (called 3 times) They even called back 2 weeks later to close the case file. I thought good service like this had dissappeared. Guess Not!

Pros: This is my first build and I was amazed at the simplicity. The MoBo seems really well layed out. There was plenty of room for my twin SLI graphics cards. I never thought I'd be an over-clocker, but Oh Em Gee, even that was made easy with the TurboV EVO. One-click Auto Tune and about 2 mins of waiting for the system to determine how far it could safely over-clock while keeping itself stable! Really, I was amazed! If you are new to building computers (as I am), and you want to take advantage of SLI capability, this is the right MoBo for you!

Cons: 1. LESSON LEARNED: SLI! Okay, there IS alot of confusion about SLI capability. Since I learned this lesson the hard way, allow me to share what I learned. If you buy this Mobo, you ***MUST*** purchase a LYNNFIELD Processor! The clarkdale processor does NOT support SLI because of the in-processor graphics chip. You can't seem to find this bit of information anywhere except in Chapter 4 of the Users Manual for this MoBo. 2. This is probably just me not having much tech knowledge but, out of the box, this MoBo has an 8 pin (2x4pin) atx12v power connector. However, 1 of the 4 pin connectors has a cap over it. The book says to use the 8pin, but i was confused as to why it was capped off in the first place. I finally decided to take a chance and use both 4pin connectors and it all works fine.

Pros: I need to submit this review UPDATE of sorts This MB is fantastic, it demands the buyer do some research. All buyers will have trouble with their Video if they hav a lynnfeild Core i5 or i7 and expect the MB video to work. It will not. ONLY with Clarksdale CPUs else we need to install a video board.

Cons: I had to learn a few things before I knew the in and outs of this powerful board.

Overall Review: Its an extremely powerful motherboard, way above the rest IF IF the end user knows how to take advantage of it. I learned the hard way myself in buying clarkdales CPU with lynnfield voltage RAM, the specs taught me a lot. Everyone, make sure you ask questions when ordering memory and CPU, I used a Clarksdale Core i3 and RAN blue ray movies just fine, the CPU suppled me with FULL HD 1080p video on my 24 Acer monitor. I have since upgraded to Core i5 661 CPU andI chose to install a video card for stronger graphics for gaming.

Pros: Lots of connections and has USB 3.0 as well as SATA III connections. Tons of SATA II ports for on-board RAID. Has a DVI, HDMI and regular D-Sub connections. HD Audio output.

Cons: Received board with defective on-board video. After realizing that the on-board video was defective the SATA III controller stopped working properly. Board automatically overclocks the CPU and RAM causing stability issues with the DIY kit purchased.

Overall Review: Maybe this was just a bad board but this is the first ASUS mainboard that I have had fail this bad.