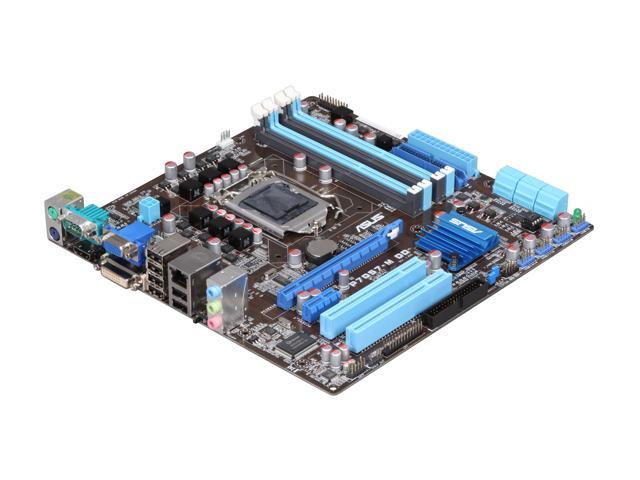 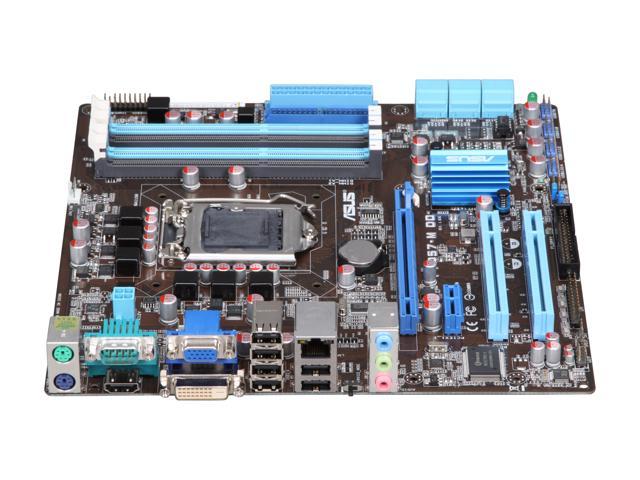 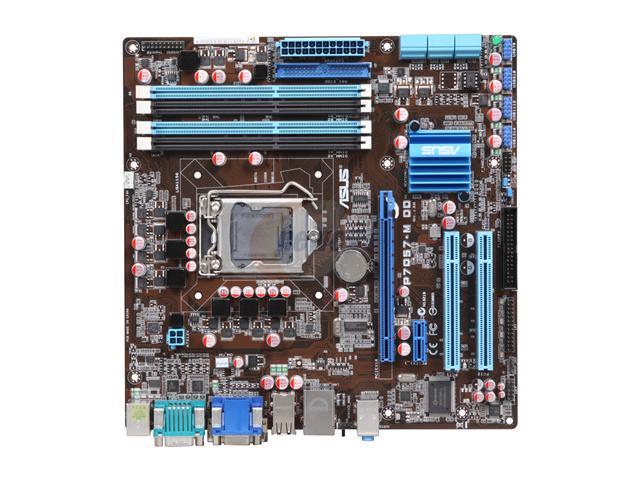 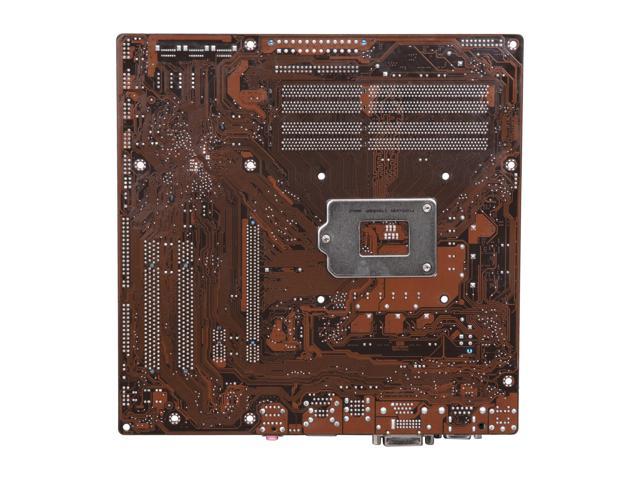 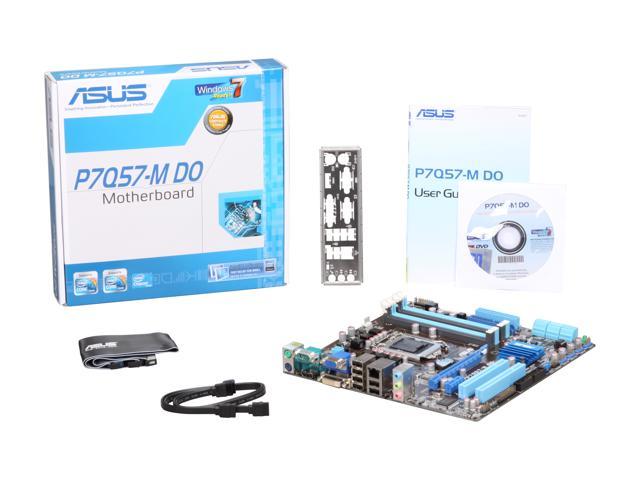 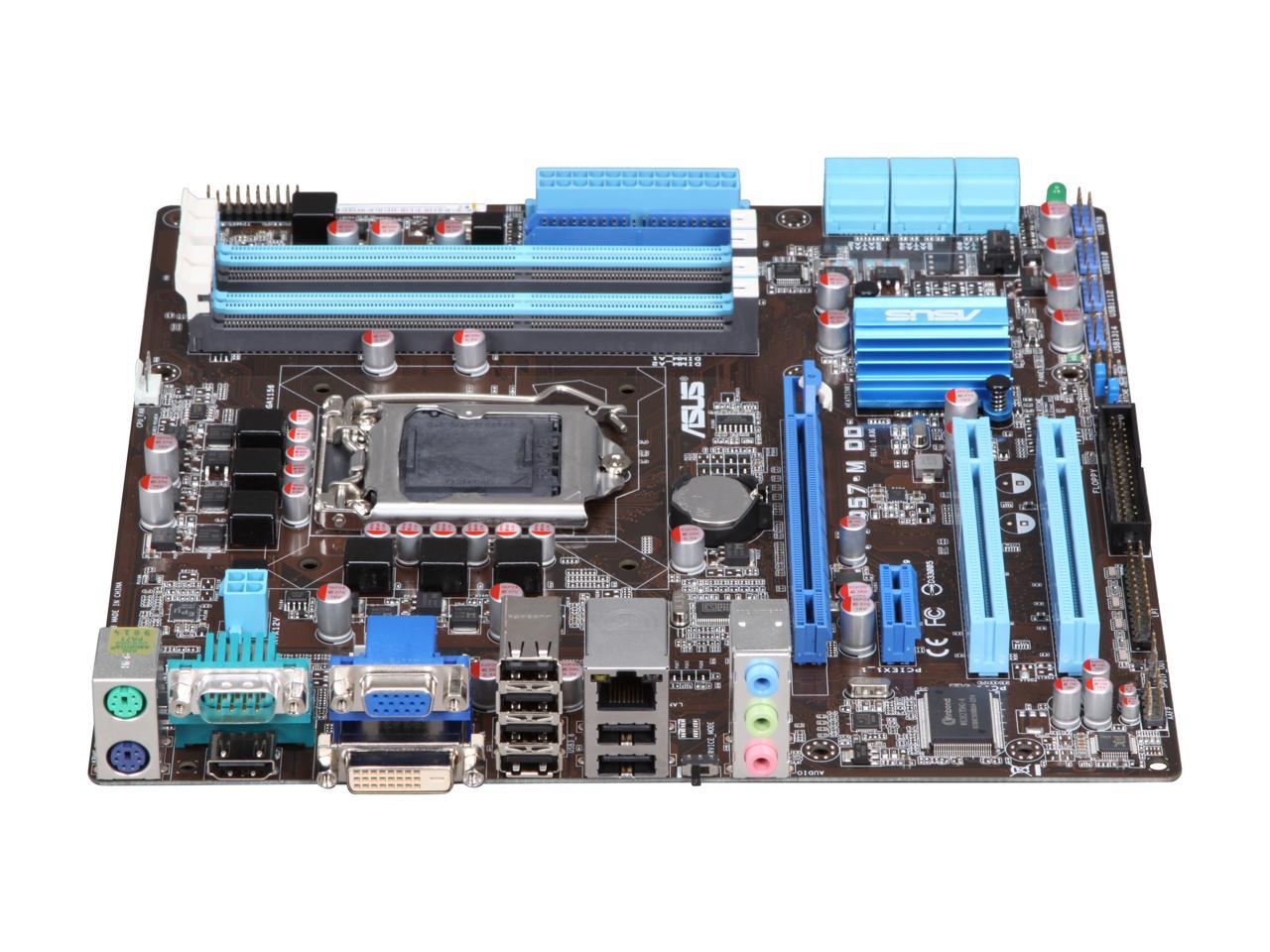 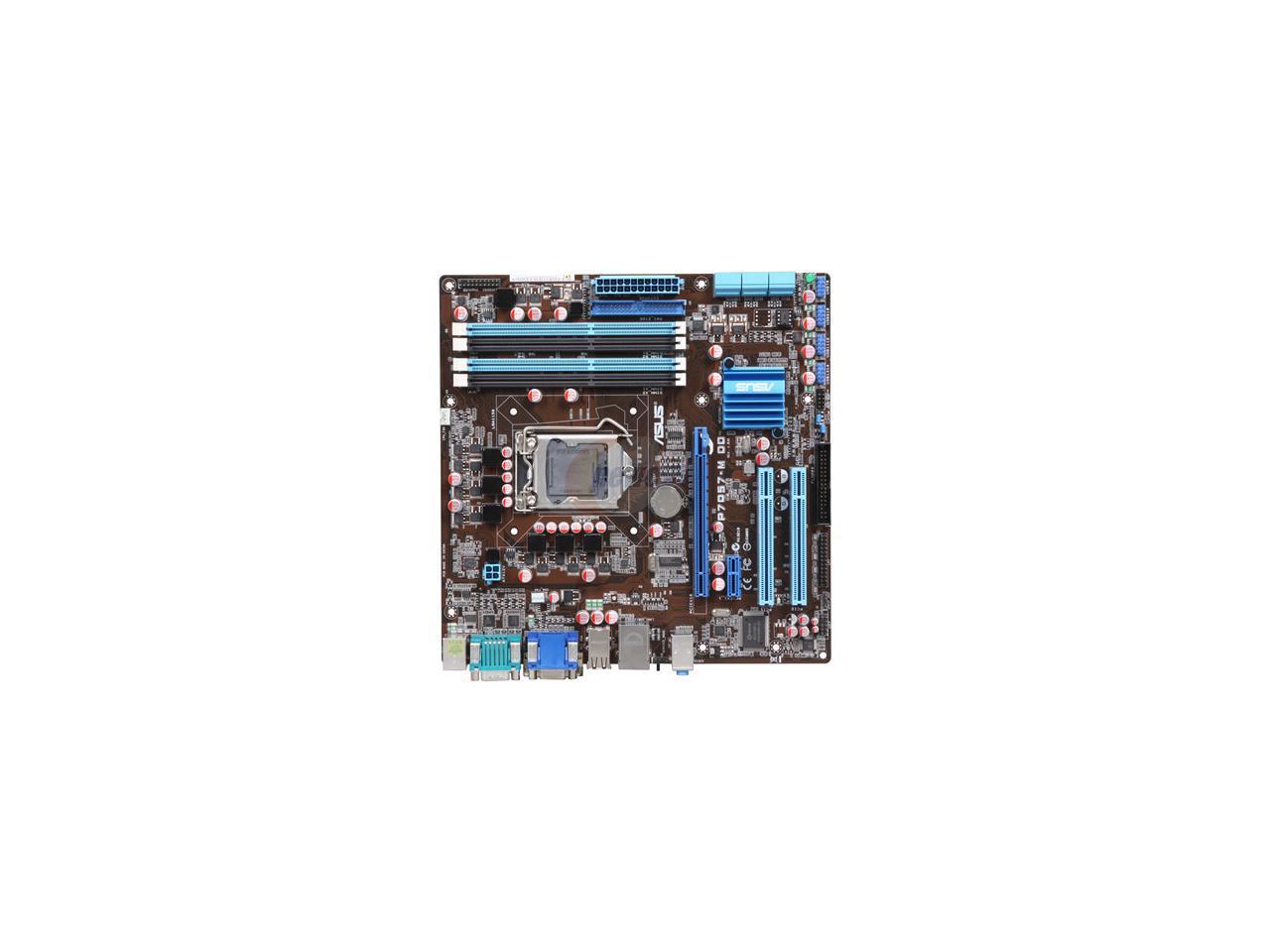 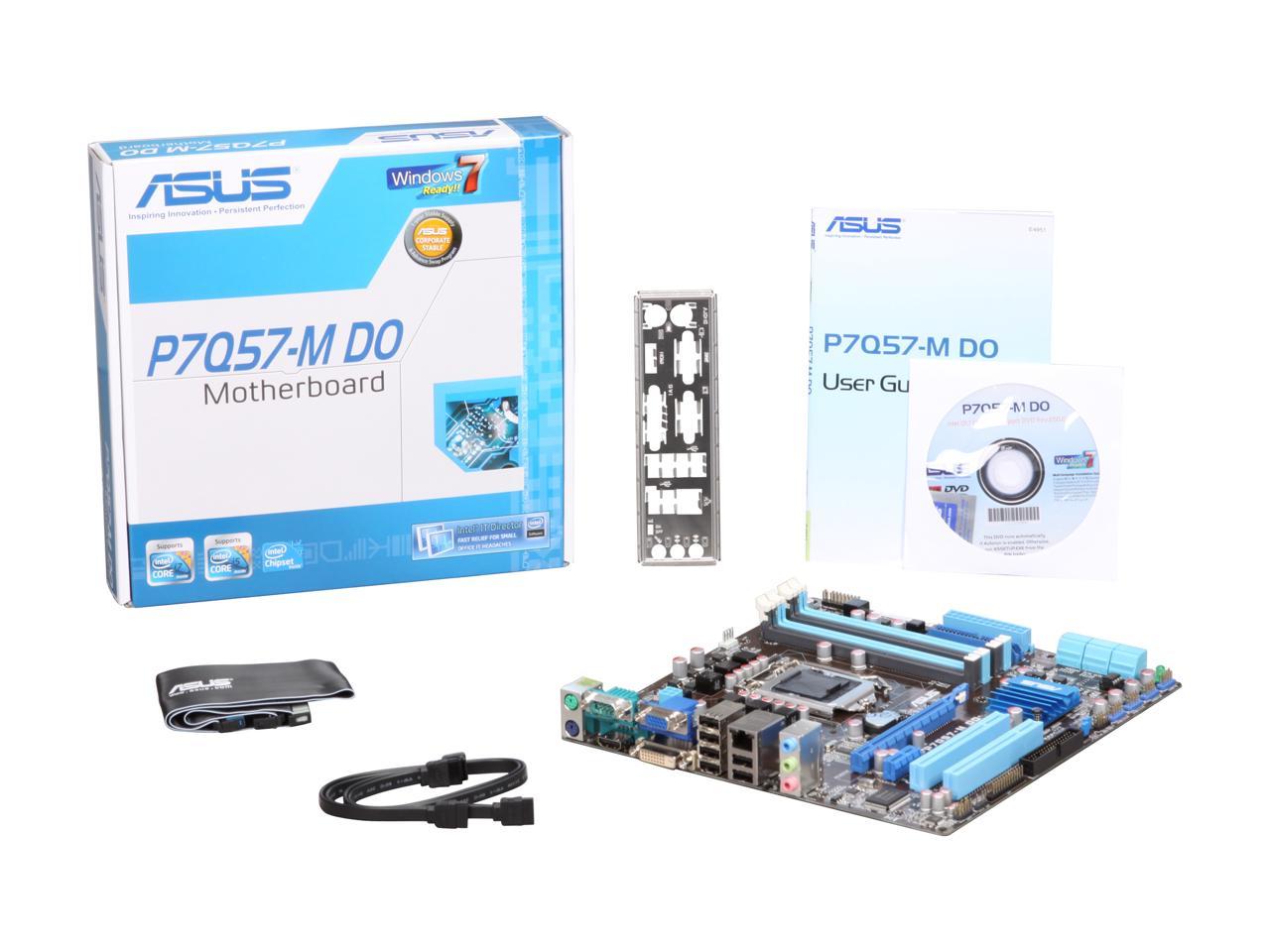 Pros: After dealing with hundreds of motherboards from various makers, I have never once had issues with Asus motherboards; they have always been rock-solid stable. I've always been fond of the EZ Flash 2 utility that is available in BIOS. I have been looking forward to the new vPro features in the Q57 chipset. The ability to turn on a computer when powered completely down, and the new KVM feature that allows an administrator to remote control the computer, even outside of the OS environment, will be very useful. Also, this board still includes IDE and Floppy connectors, as well as legacy PS2 connectors. This board's solid spread of legacy and current connectors was the main reason I purchased this model, as this flexibility can be a real boon in corporate scenarios. Even today, the serial port can be useful in rare instances in a business environment.

Cons: I hate the vPro toggle switch on the rear of this motherboard. Although I put up with it on Asus' previous CSM board, the P5Q-EM DO (of which I own several), I don't want my users to be able to disable vPro features; this should be done in BIOS. Even worse, Asus did not include the alternate (three prong) Power LED header that is present on Intel's Q57 reference design. Because Asus only includes the (two prong) Power LED connector, I was unable to use this board with the Antec NSK3480 cases that I keep in stock. Compared to the P5Q-EM DO, Asus has decided to be very stingy concerning the accessories included with this board. They no longer include the Q-Connector, which I used to LOVE on the P5Q-EM DO; it was very convenient and a real time saver. I used to find the Molex to SATA power converter useful, but those are no longer included either. Also, the lack of at least one eSATA port on a board in this price range is tantamount to robbery.

Overall Review: The Power LED mix-up was ultimately the deal breaker for me, and as I write this review, these boards are in transit back to Newegg. I struggled between giving this board (3) and (4) EGGS; eventually, I decided to give it (3) EGGS because I was unable to keep the board. If I could have found a use for it, I would have given the board more EGGS. Because of the Cons mentioned above, I will be purchasing Intel's BOXDQ57TM for all my future builds at the office.

Pros: The specs on this motherboard sound great.

Cons: CPU fan error on every boot, even though the fan is running. Random shutdowns. I was able to get around both of these errors by following advice on the ASUS forums, but then the system would randomly stop responding -- no video, no keyboard. Tried two BiOS versions (402 & 602) with the same results. After working on this for a week, I'm done.

Overall Review: The motherboard and software seem to be very flaky. For a "Corporate Stable Model" this is unacceptable! There is no way I would deploy a computer based on this board in a business production environment.

Pros: Reasonable price and good set of features. I would have preferred an ATX board with more slots (future flexability), but I had a requirment for TPM which isn't available on most motherboards. I initially got an ASRock P55 Deluxe3, but had problems with SSD RAID0 drive constantly crashing and was also unable to get TPM working. Replaced ASRock with this Asus board. All the other hardware and software is the same as before and no more RAID0 crashing problems with this Asus board. The ASRock SSD crashing seemed to be due to a problem with Marvell SATA3 controller or conflict with Intel ICH10R SATA2 controller? From a benchmark website I found SSD performance was actually better on ICH10R SATA2 than Marvell SATA3 and I was able to duplicate their results in my own HD Tune testing on this Asus motherboard. Intel vPro feature is also a plus though I haven't tried using it quite yet.

Cons: BIOS is periodically lost. Haven't found the exact trigger, but seems to occur most often after the computer goes to sleep. RAID, TPM, and Supervisor passwords, etc., are lost from the BIOS and thus computer will not boot until I reconfigure the BIOS. Intel Core i5 has built in GPU that worked on this board, but I preferred higher performance. I installed an EVGA GeForce GTX 460 which I'm using now. A lot of higher end graphics cards seem to take up the width of two slots. For this microATX board that is a slight problem in that the PCIe 1x slot cannot be used due to the proximity to the PCIe 16x slot. A minor nuisance as the Creative X-Fi card I'm using is PCI. Given there is a sound chip built on the motherbard, along with Ethernet, etc., most people may not need to use any slots (other than possibly a discrete graphics card). TPM 1.2 spec evidently doesn't guarantee pins on a given TPM will match pins on a motherboard. That made finding the right TPM awkward.

Overall Review: I've had good success with Asus over the years. The features on this board intrigued me, but I was concened about how many people seemed to have problems with this board. I did not have any problems installing hardware or software with this board. I initially used the Intel Core i5 built in GPU. After using the computer for several months the BIOS problem cropped up which is a significant nuisance as this computer is used by my children (who aren't able to correct the BIOS problem on their own).

Pros: This board has everything. I have not seen a board this complete, stable and well designed in years. Look over the specs, you will be amazed. Intel Lan, 2xps/2, dvi, d-sub, ide, 6xSATA, Serial, Floppy, etc.

Cons: There was a flash update I applied. Not sure if fixing bugs is a con or not, though I did not need it for the i5-670 I put on it.

Overall Review: I am not sure what this board is missing. Did I mention it actually has an Intel NIC on-board?

Pros: As usual ASUS has kept me very happy. I bought this board for my Windows Home Server because it had RAID support and it works great! It's been running 1 week now 24hrs a day with no problems. It even worked with my G.SKILL low voltage (1.35v) memory.

Cons: None so far, It has no pc speaker pin but I haven't used a PC Speaker for years.

Overall Review: It seems like A LOT of people are having problems with this board. Perhaps a bad batch? Mine worked 100% right out of the box with no "cpu fan error's" or random freezing. It booted up fine first boot and I've had no problems since. Because WHS does not support raid if you plan to install it using this board, or really and raid board, you will need to slipstream the Intel Storage Matrix drivers into the Windows Home Server DVD, but thats fault of Microsoft, not Asus. Core i3 530 w/ stock cooler 4GB (2GBx2) G.SKILL Eco Memory 7-7-7-21 2TBx2 Samsung F3EG in Raid1

Cons: the boot up stops with an fan error message . i tried everything . from deferent brands of memory to multiple fans and power supplies to video cards . wasted a day till i read newegg reviews that this can be a common lemon problem, i thought asus got rid of this error message years ago

Overall Review: i am disappointed and this is not the first time asus has had this problem with an fan error massage . its not just related to this motherboard . i have seen this in the past many years ago. i will try again till i get a working motherboard . thank you newegg for your top customer service

Pros: I am currently using this motherboard to build the desktop standard with Win7 for a business. so far I have built 5 of these, and am ordering more now. I paired it up with a Core i3 530 and 2GB of Kingston Memory. This case is perfect for this board IN WIN BK644.BN300TBL.

Cons: One of the boards said CPU Fan Fail on every boot even tho the fan was working fine, new fan same thing. Returned it and replacement board is fine..

Overall Review: AMT is pretty cool.. need to put some research into some tools I can use with this for jumping into someones desktop to help them when needed.

Pros: None as it did not work.

Cons: Arrived dead. I had to spend the afternoon making sure it was not the memory or the CPU. Asus's web site has barely any information about this motherboard and does not even have a list of supported memory sticks. No support, dead motherboard, I hope the replacement will work as expected.

Manufacturer Response:
Dear Valued Customer, We sincerely apologize for this inconvenience. Please contact us at OC_Support@asus.com and reference case number NE0353 so that we may get more details about your system configuration and assist you in resolving this issue. Best regards, ASUS Support Team