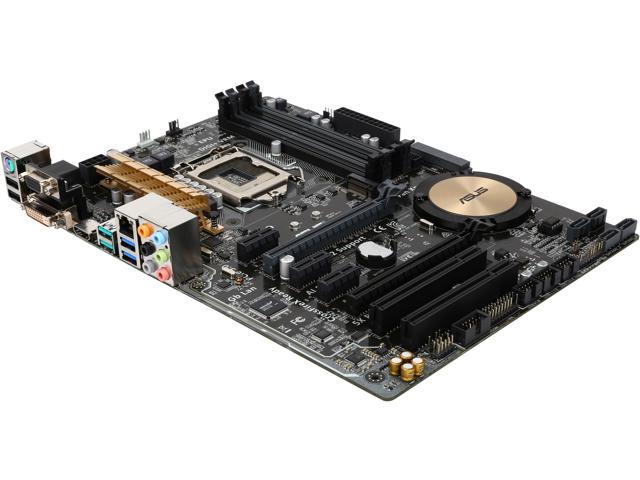 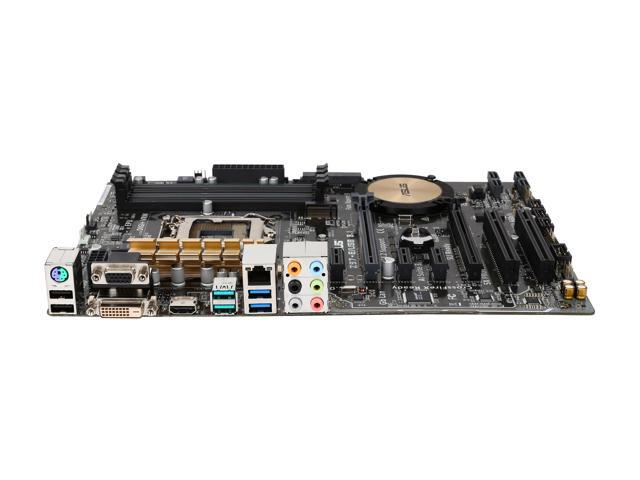 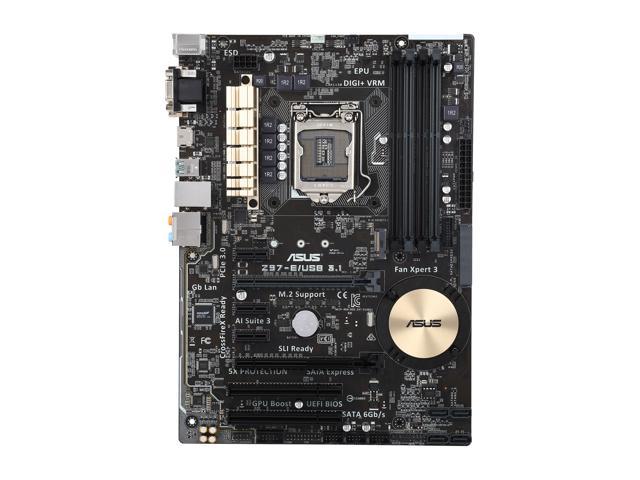 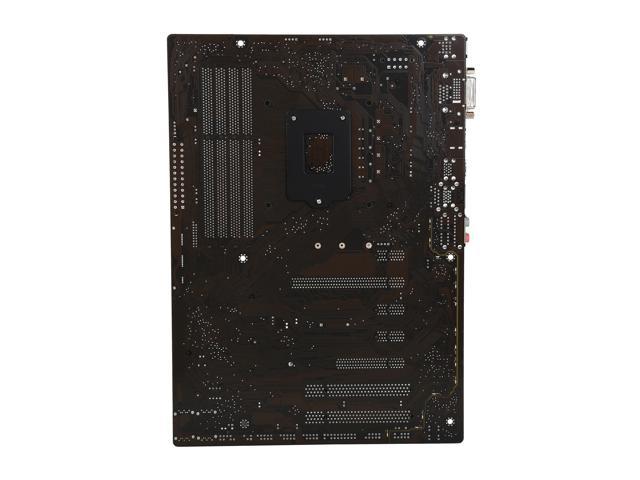 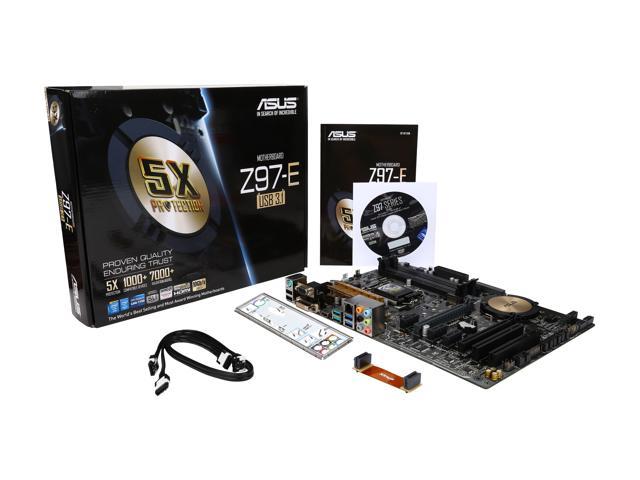 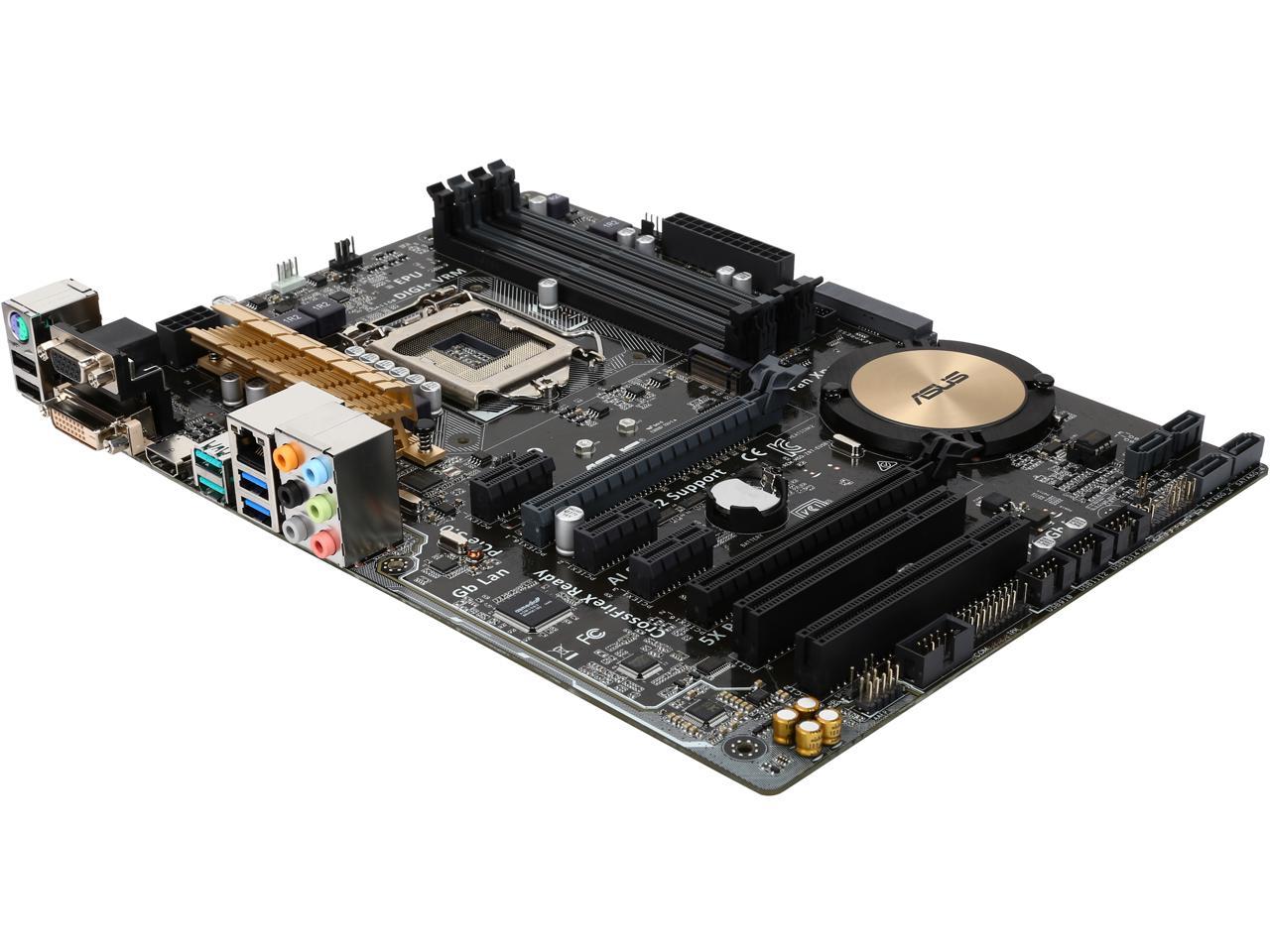 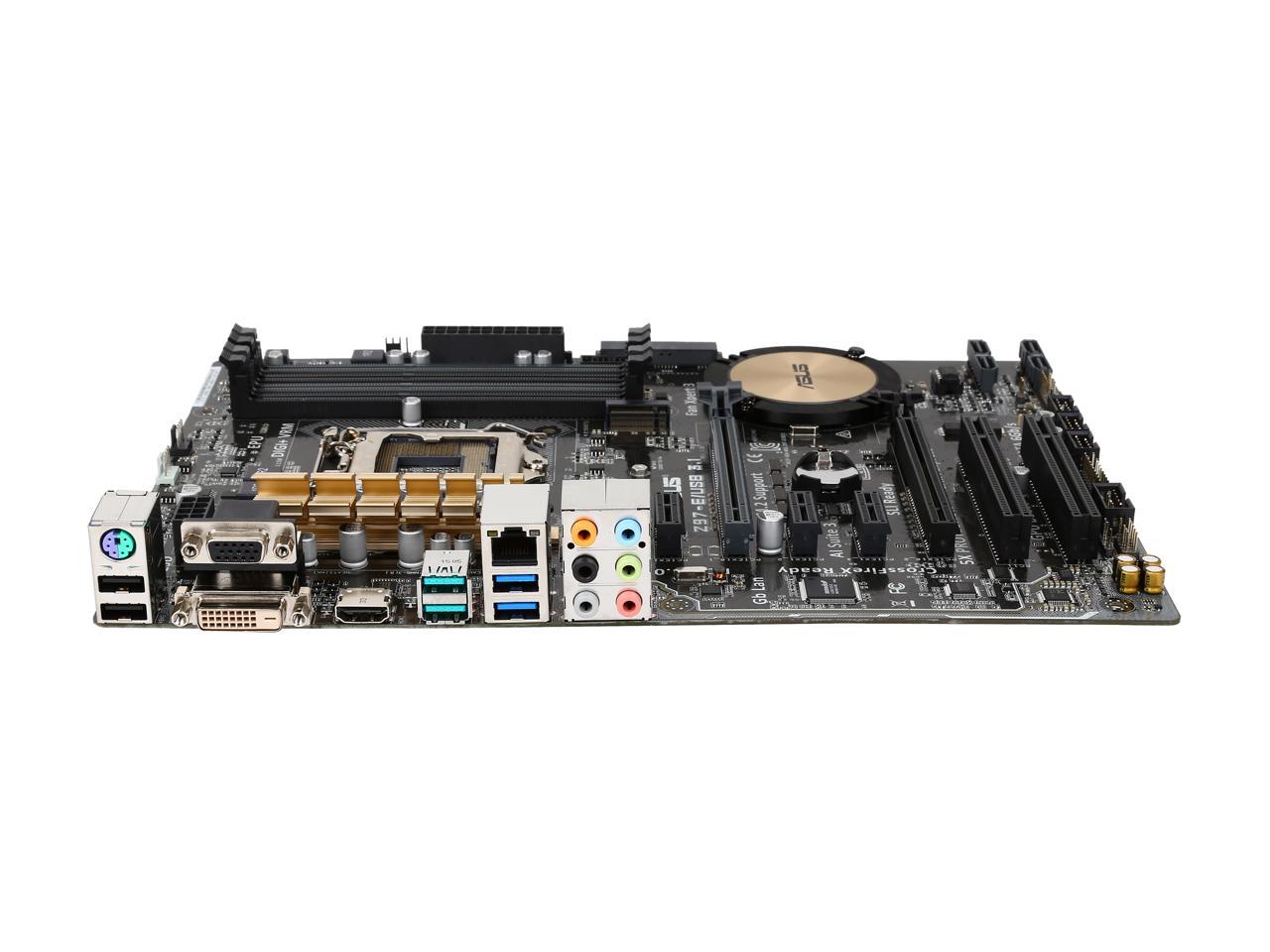 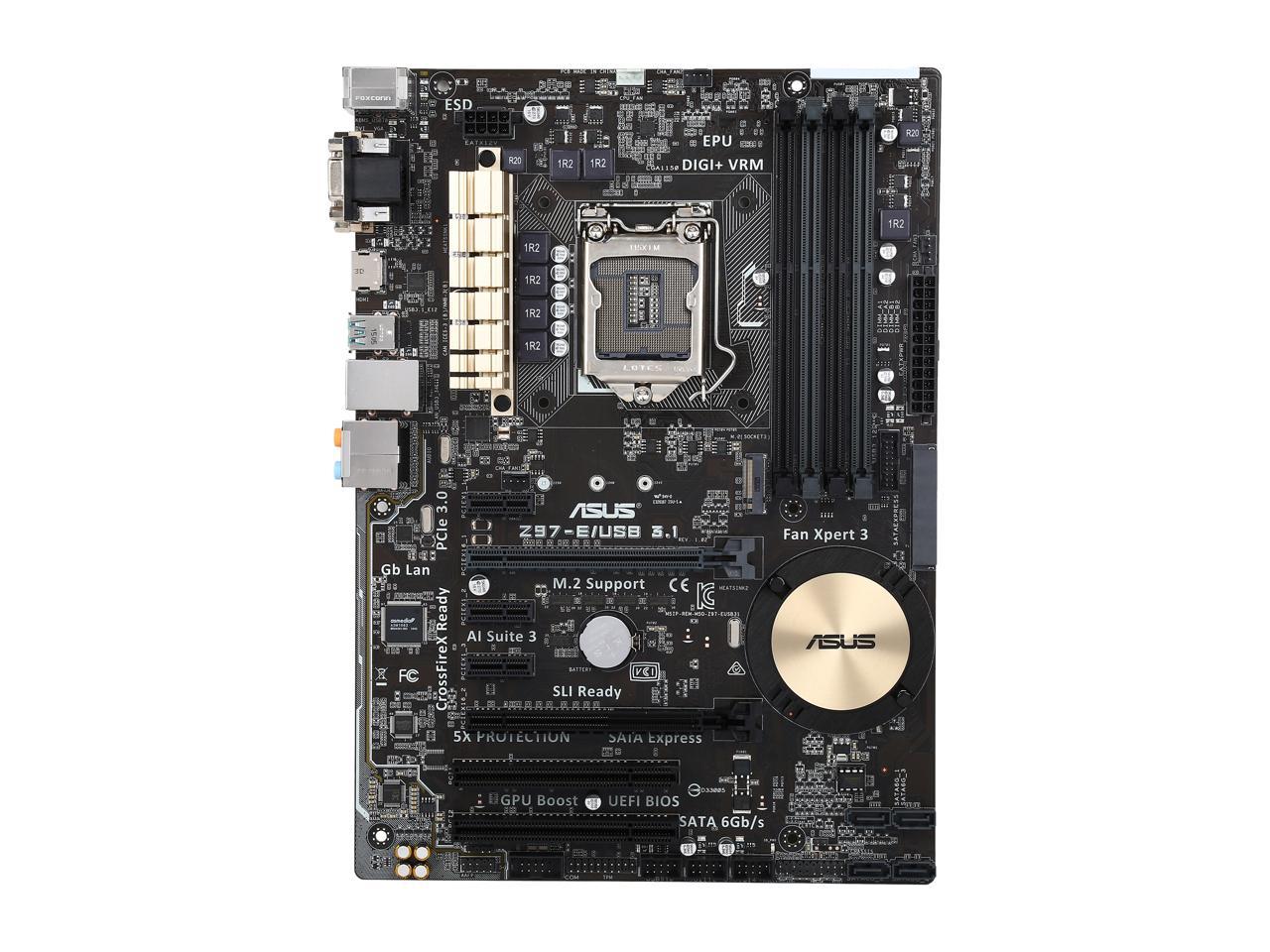 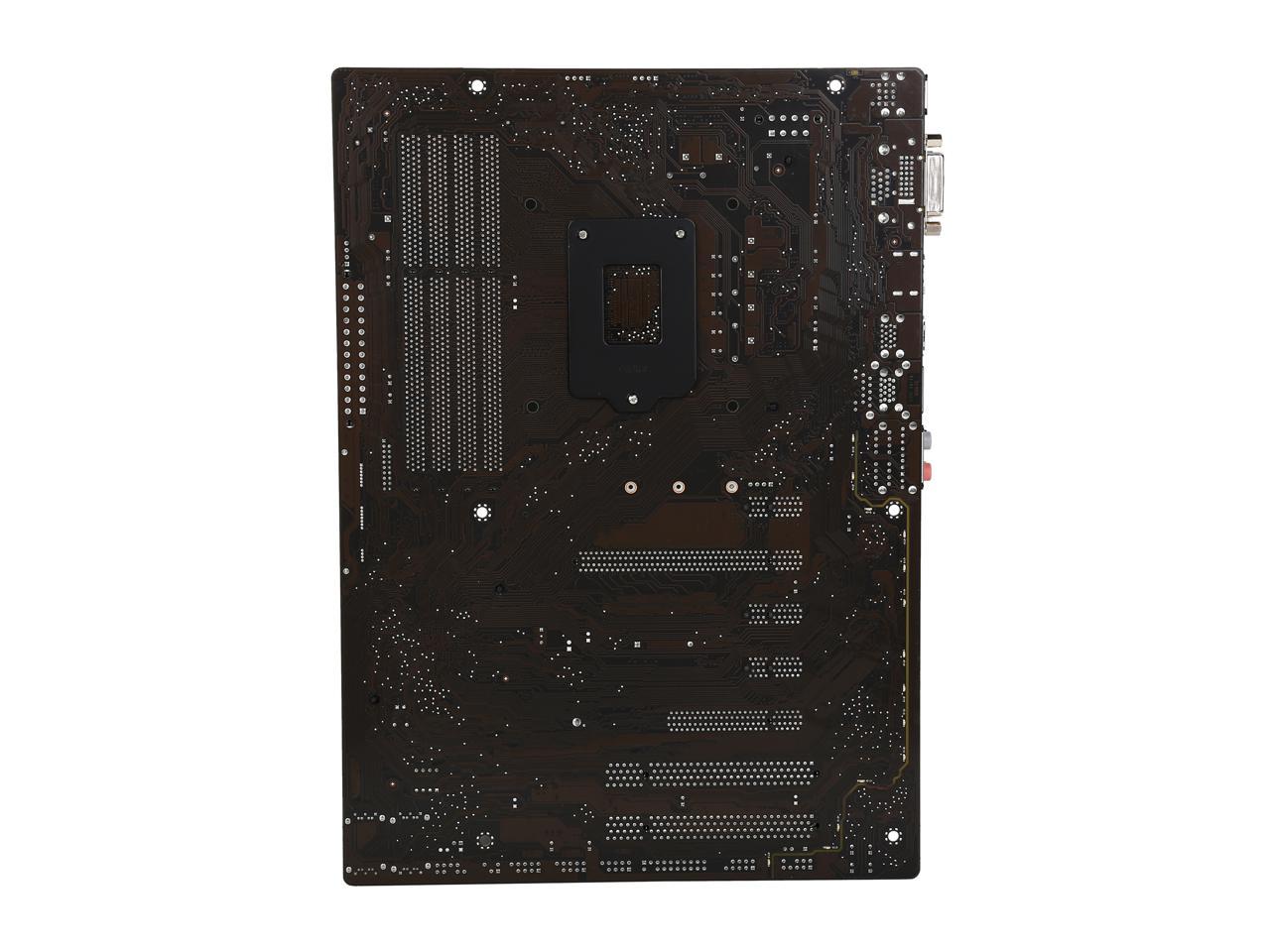 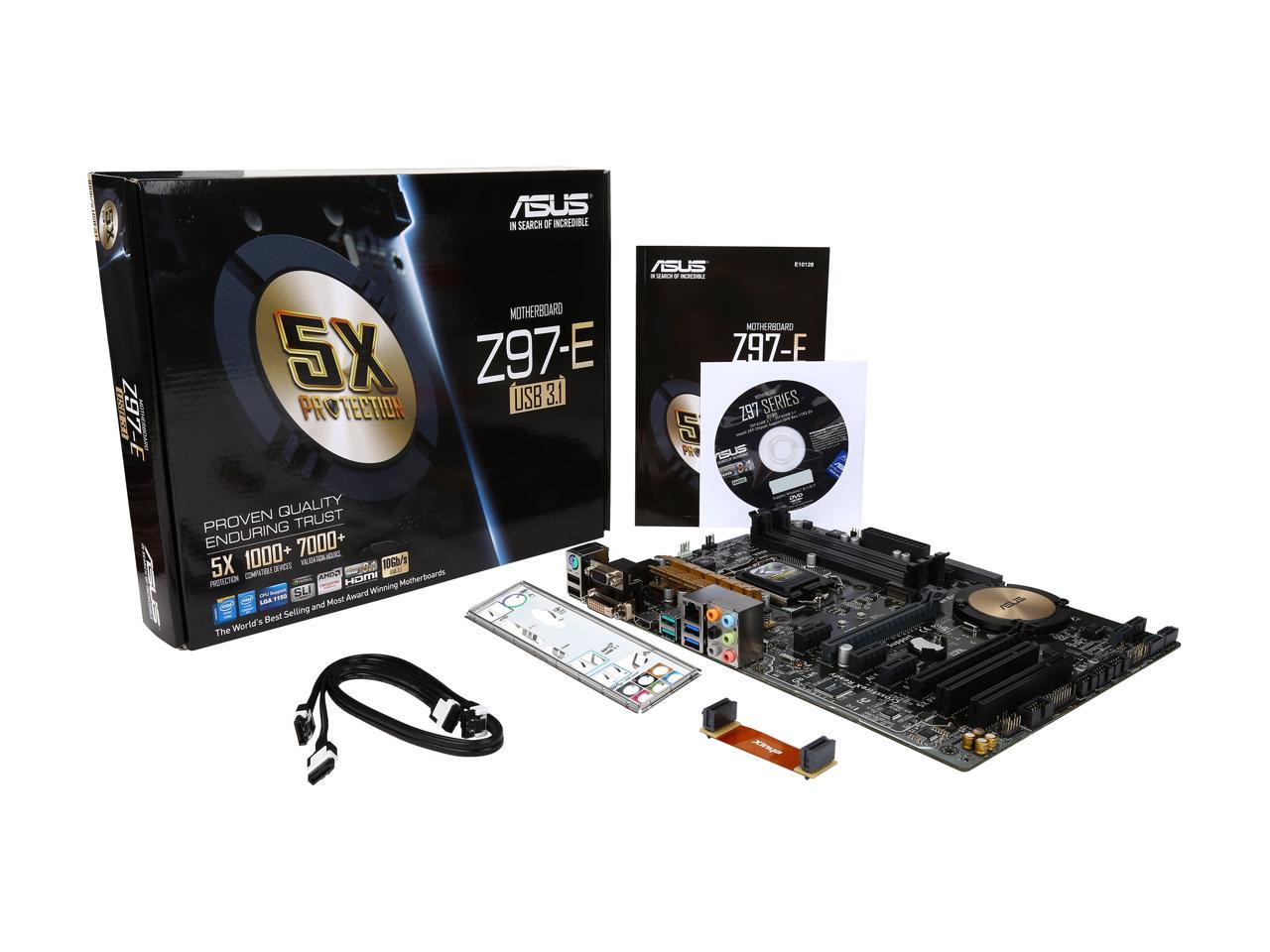 This means that the product has been opened, possibly used but is in perfect condition with no signs of cosmetic or functional defect. Product may includes warranty, and accessories found with the original product. Product may or may not be in the original packaging. Returned items with minor packaging defects fall under this category.
See more "lga 1150 motherboard"
In stock.
Ships from China.
Most customers receive within 4-17 days.
Overview
Specs

We are the world's biggest motherboard manufacturer, and renowned our design thinking that revolves around users – just like you. Our engineers employ exacting standards to guarantee quality throughout the product's life, choosing the finest components for real-world protection. Our motherboards are proven to be compatible with more than 1,000 components and devices, and undergo a minimum of 7,000 hours of strict validation. That gives you the peace of mind of knowing that ASUS motherboards are fit for all environments and applications. To build your PC with the best foundations, build it with an ASUS motherboard.

Our be-the-best ethos underscores the choice of every single component that goes into your ASUS motherboard. We focus relentlessly on quality to ensure long-term system reliability and performance.

Voltage regulator modules (VRMs) are among the most essential motherboard components. A good VRM intelligently delivers CPU power based on actual needs at any given time. ASUS was first with digital power design featuring faster sensing and response to deliver precise CPU power on demand. This great accuracy reduces energy waste and of course improves system stability thanks to more consistent delivery.

Onboard resettable fuses prevent overcurrent and short-circuit damage. This extends beyond I/O ports to DRAM to safeguard the lifespan of both your system and connected device.

Electrostatic discharge (ESD) can happen suddenly, and its damaging effects are easily underestimated. ASUS ESD Guards are tested to very high standards, capable of up to +/- 10kV for air discharge and +/-6kV for contact discharge. We employ an active protective circuit design to guard your system against electrostatic interference and damage, providing greater component longevity. Having the freedom to pick and choose the parts that go into your machine is at the heart of PC DIY. Our extensive certification program focuses on providing the very best compatibility with the widest range of components and devices, giving you the freedom to build and upgrade without frustration. Compatible today and compatible far into the future – that's the ASUS way.

Every 9 Series motherboard is compatible with thousands of devices. Our engineers fit and assess both server and consumer CPUs, hundreds of memory modules, dozens of graphics cards, loads of storage devices, power supplies, network devices, displays, optical drives, peripherals and many more. We do this to give you complete confidence in our products and their superb compatibility. Complete & Public QVL
View our Qualified Vendor List (QVL) online
We're so confident in our 9 Series motherboards' superior compatibility that we publish our entire QVL for all to see — delivering you more choices for worry-free PC-building experiences. There are no gaps in our QVL: every compatible component is on the list for all to see. To check that a particular component or device is compatible with your motherboard, just reference the QVL for instant reassurance.

When you choose an ASUS motherboard, it's likely you'll also go with ASUS for other components. ASUS designs products from the ground up so that graphics cards, sound cards and optical drives work flawlessly with your motherboard.

Our motherboards have superb endurance. We verify this by subjecting every board to over 7,000 hours of stringent tests. A barrage of burn-in, environmental, compatibility, software and safety tests confirm that our motherboards are exceptionally robust — with reliability that surpasses industry standards.

Each motherboard is subjected to extended reliability testing under heavy load conditions, from the transportation to daily operations, to make sure they are delivered to you in perfect condition. Trials include temperature and humidity, burn-in, power on/off, power consumption, insertion and thermal-shock testing among many others. Every certified-compatible component puts through an up to 24-hour aging test to ensure trouble-free operation every day – no matter what you fit or attach and no matter what you do!

Games or multimedia — it's always ready!


Flawless audio that makes you part of the game

Crystal Sound 2 makes short work of optimizing audio settings for the way you want to listen, be it gaming, chatting, watching movies or relaxing to your favorite music. Onboard physical shielding, professional engineered design and premium components, including Japanese-made audio capacitors and operational amplifiers (op-amps), result in sound output that has exceptional clarity and fidelity. Discover a whole new dimension of superior audio and get ready to rule! A double win for gaming!

The difference between defeat and victory can be measured in milliseconds. That's why ASUS motherboards are equipped with state-of-the-art networking technology that puts your frags first! Faster, smoother gaming – always. Intel® Gigabit Ethernet has the serious double advantage of communicating directly with CPUs and offering high TCP and UDP throughput. This significantly reduces the processor's workload, so there's more power for your game and your gameplay.

Up to 2X-faster UDP game-data performance

ASUS engineers used IxChariot, an independent network-assessment test tool, to determine just how much quicker Intel Gigabit Ethernet deals with the smaller (sub-256 byte) UDP data packets that are vital for responsive gaming. The results are in — and with Z97 your game-data packets flow up to two times (2X) faster than competing gaming-LAN technologies!

Work with up to 3 displays

Connect up to three independent monitors at once using video outputs such as DisplayPort, Mini DisplayPort, HDMI, DVI, or VGA. Choose your outputs and set displays to either mirror mode or collage mode. 
The smoothest, slickest mouse-controlled graphical BIOS has been improved to make it even more appealing. Whether you're a PC novice or a seasoned overclocker, the EZ and Advanced Modes help you find your way, quickly and easily. 
Fan Xpert 3 is an extremely advanced fan-management tool that puts 4-pin/3-pin CPU and case fan controls in one place. It scans each fan's characteristics and intelligently delivers custom settings for each fan based on the dedicated area temperatures. Make sure every fan achieves the best balance of cooling performance and low noise.

Fan Xpert 3 supports hardware-level PWM/DC combo mode for both the CPU and case fans. It even has the upgraded ability to reduce the CPU fan speed to below the default minimum, for extra-quiet and power saving operation during light loads. Designed for users who wish to reduce noise levels to near 0dB with highly specific fan speed control. It reacts to system loads for greater response.

Scans fan parameters through exclusive automatic speed detection to provide custom settings for each fan with a single click. This achieves the best cooling for your components beyond just the mere number of fans in your case.

Delivers complete information that allows you to take advanced control over each fan. With the latest USB 3.1 connectivity built in and dual Type-A ports for the very fastest USB data transfers, you'll experience data-transfer speeds of up to 10Gbit/s — or twice as fast USB 3.0. The next-generation standard is completely backward-compatible with your existing USB devices, and you'll be all set for USB 3.1's breakneck speeds. And ASUS-exclusive USB 3.1 Boost technology automatically accelerates USB 3.1 performance even further! SATA Express provides up to 10Gbit/s data-transfer speeds from two PCIE 2.0 lanes, resolving the higher bandwidth request in the near future. The current SSDs consume up to 550MB/s, which is close to saturation point for SATA 6Gbit/s connections. Backwardly compatible with up to two SATA drives, SATA Express is the next-generation connectivity standard — and ensures that you and your system won't get left behind. Speed up your system with M.2

With two native PCI Express 2.0 bandwidth, M.2 supports up to 10Gbit/s data-transfer speeds. It is the perfect choice for an operating system drive, making your whole PC work that much faster. It supports Intel® Rapid Storage Technology to ensure even faster access to data, refresh applications automatically and awake from sleep in just seconds!*