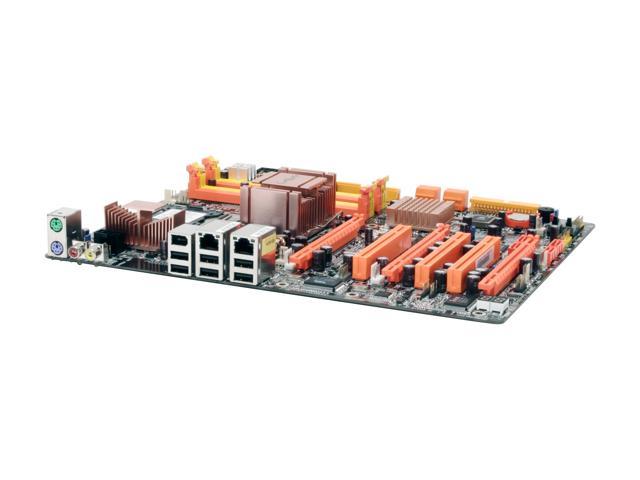 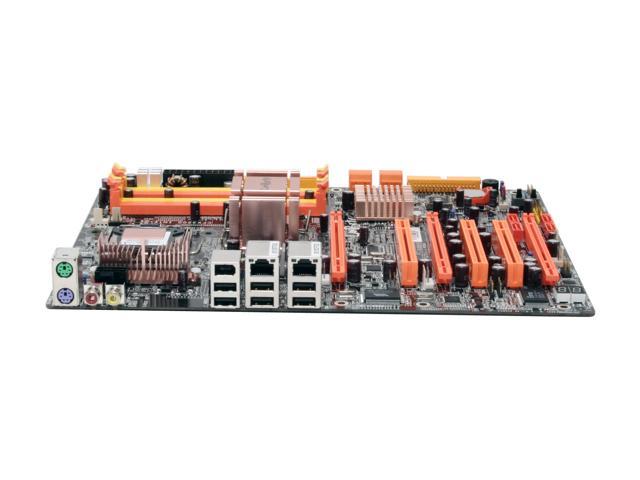 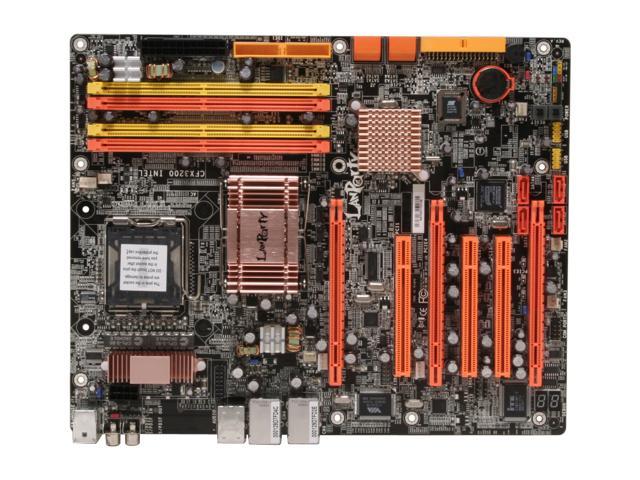 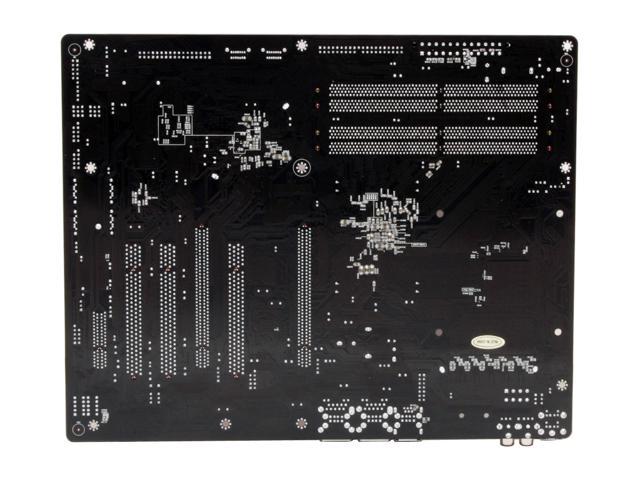 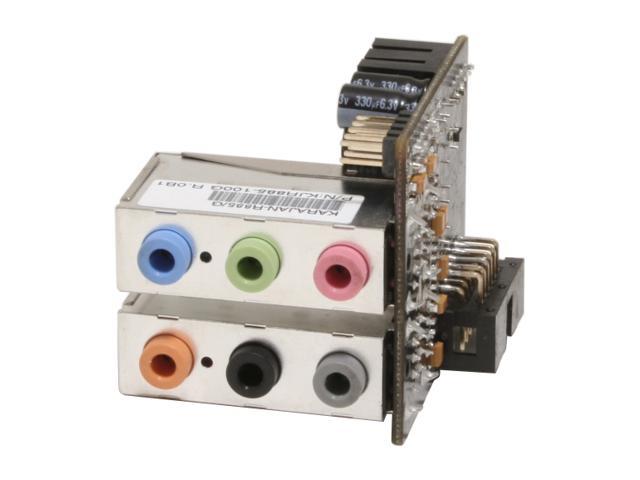 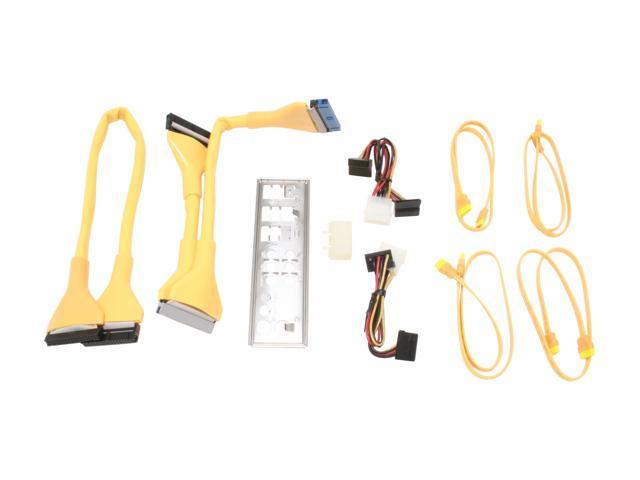 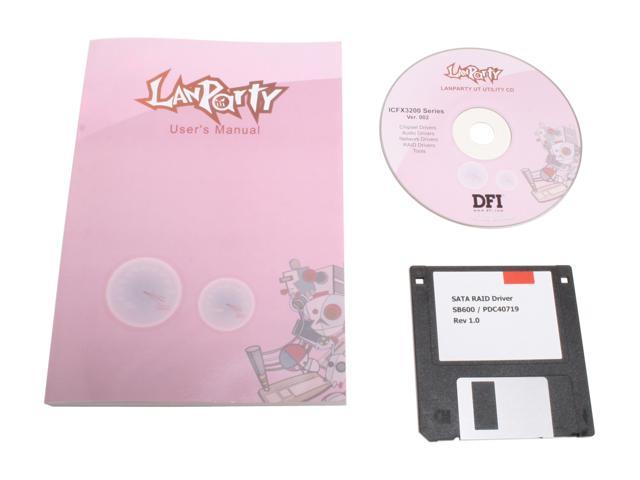 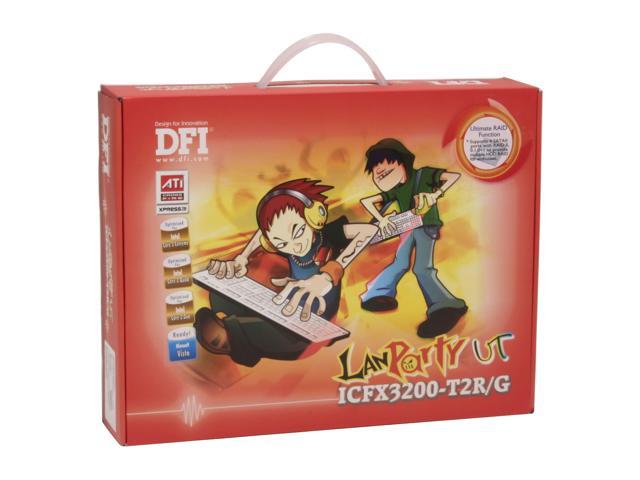 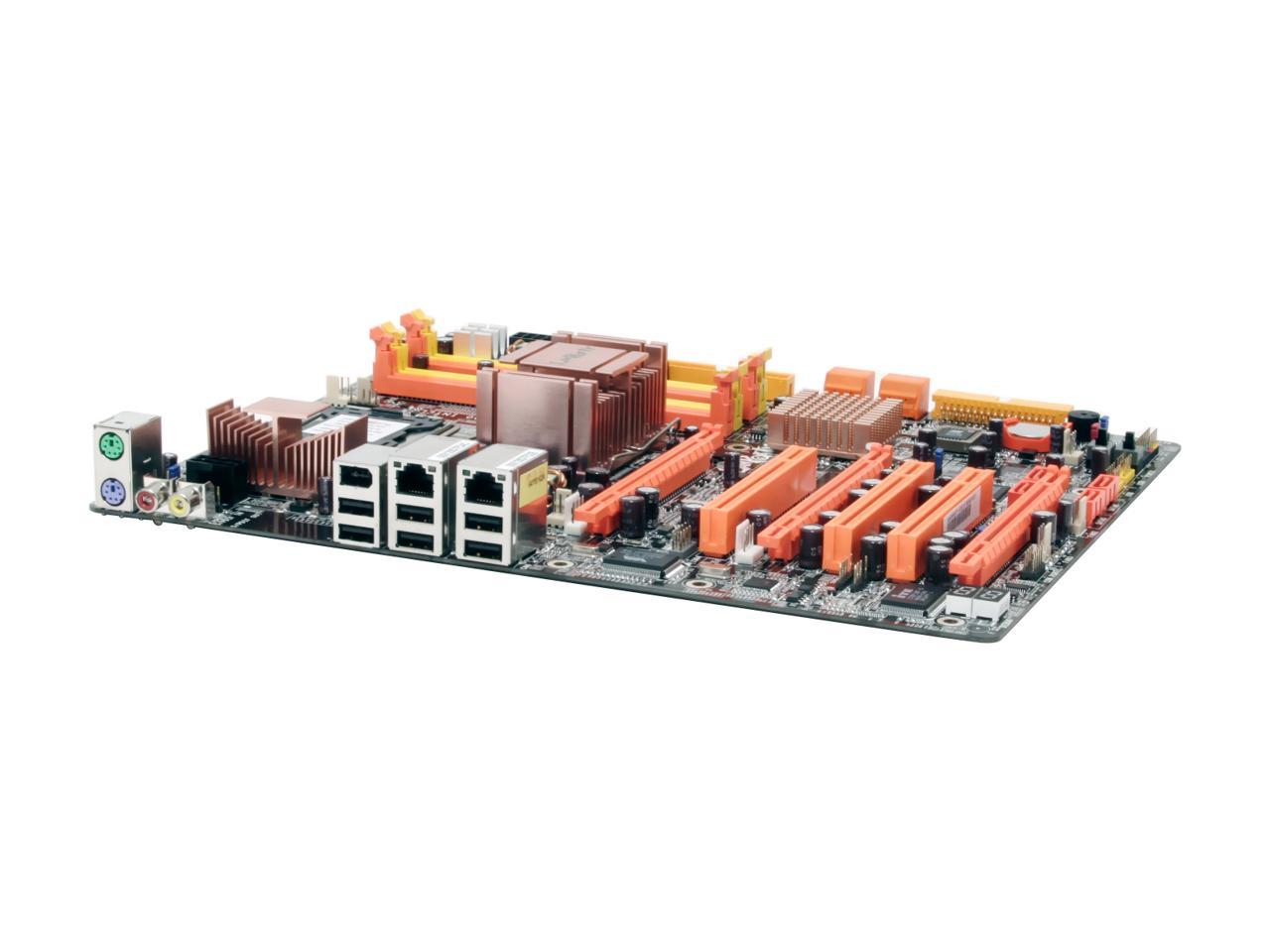 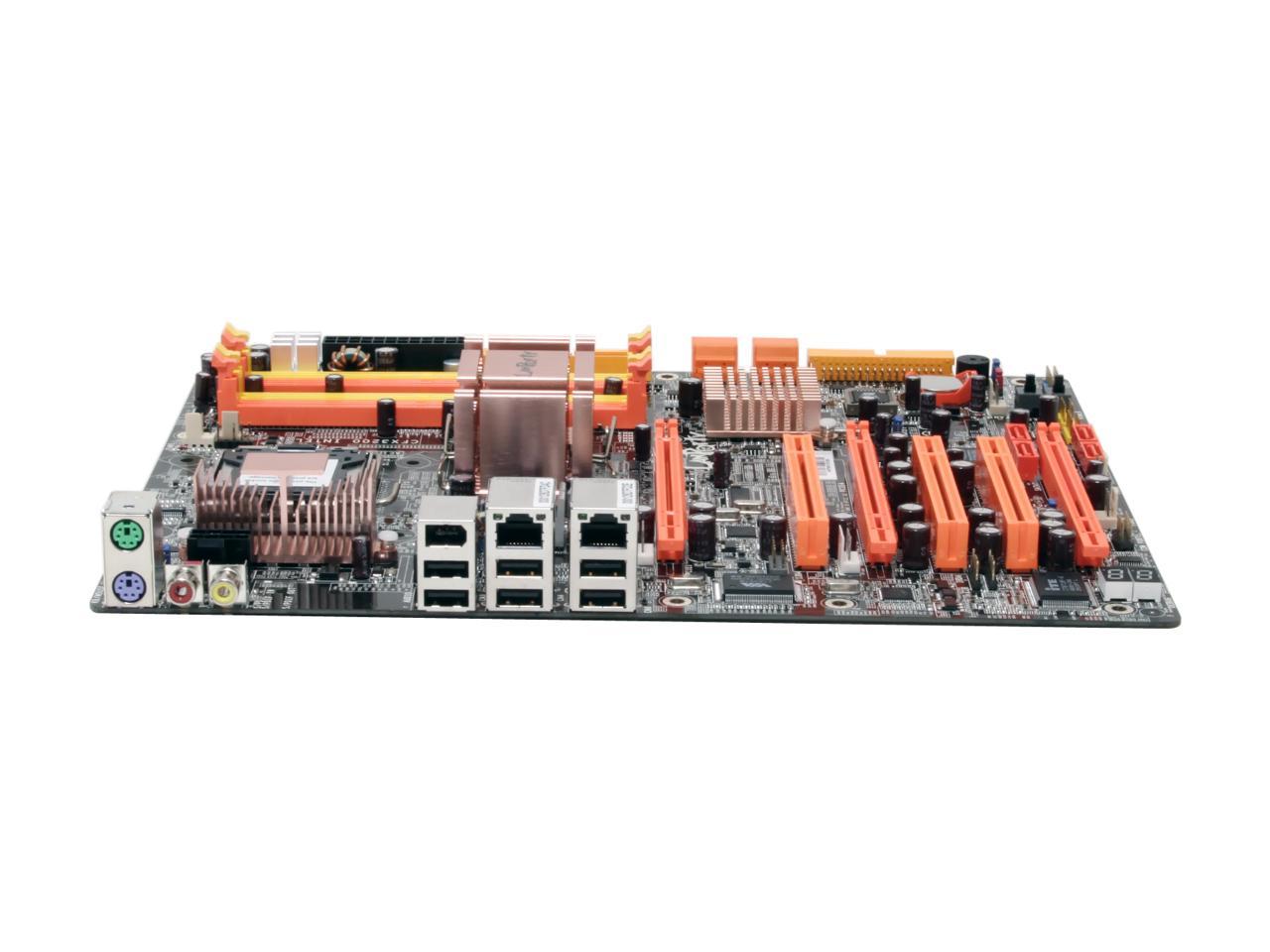 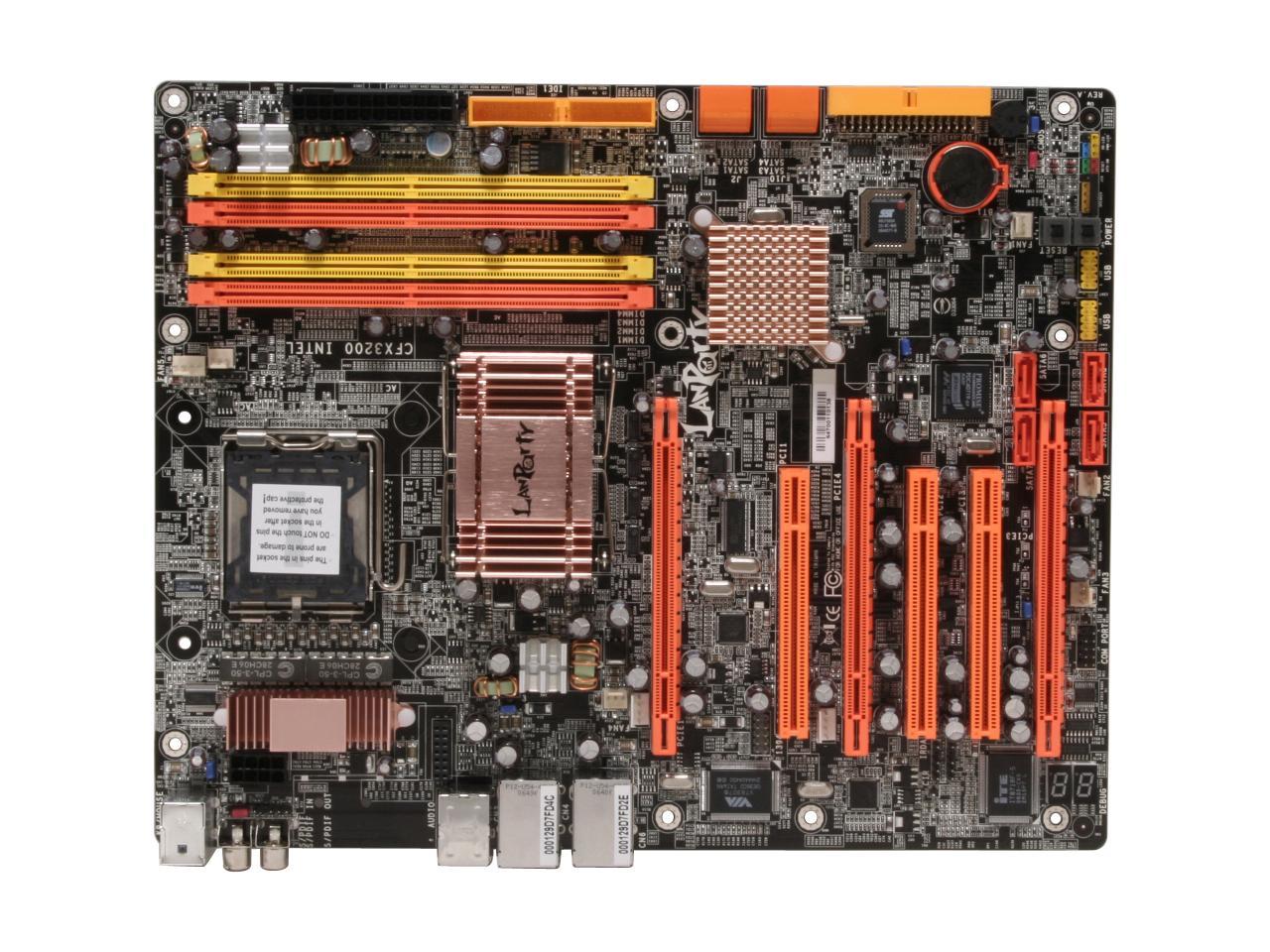 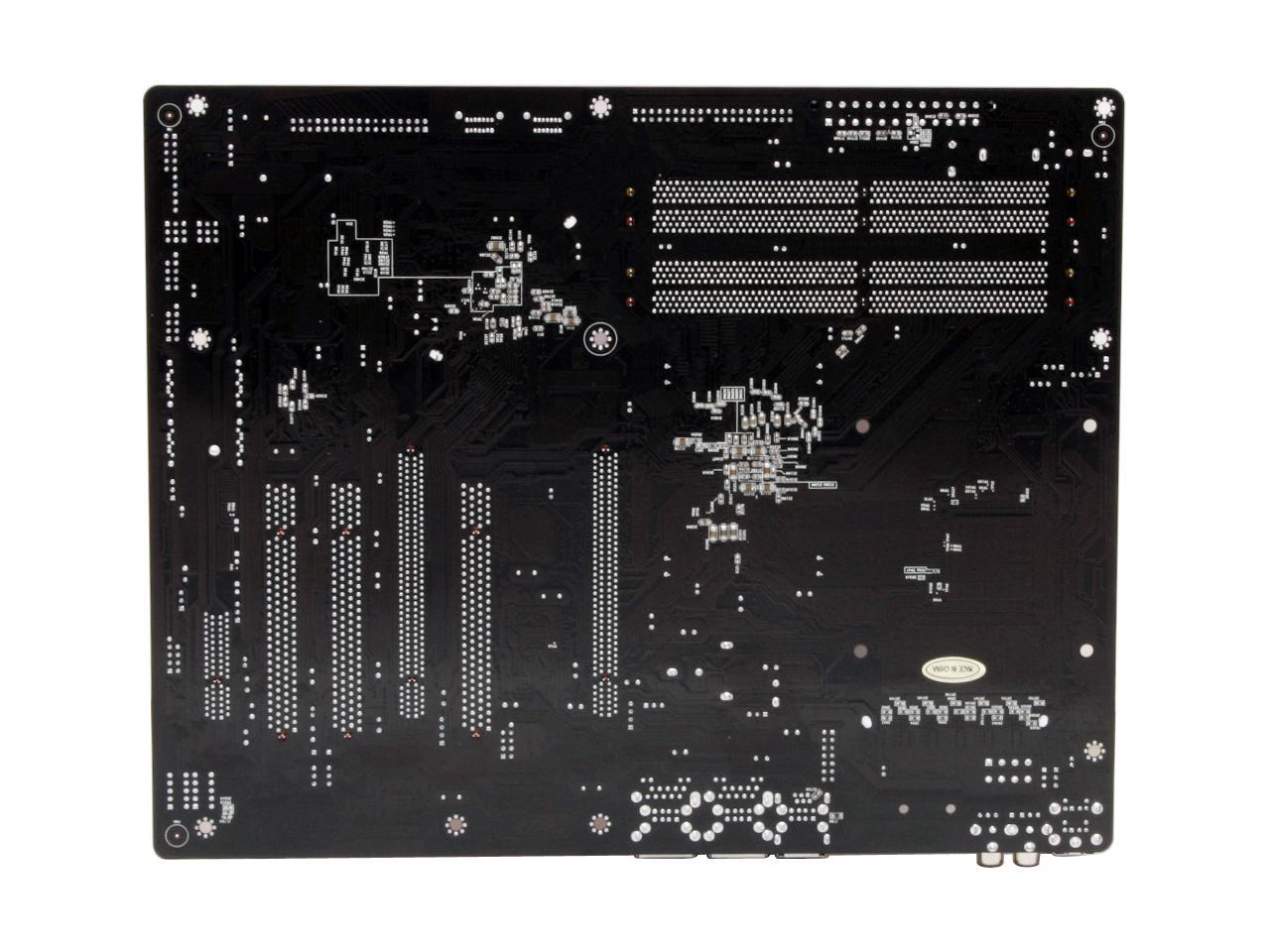 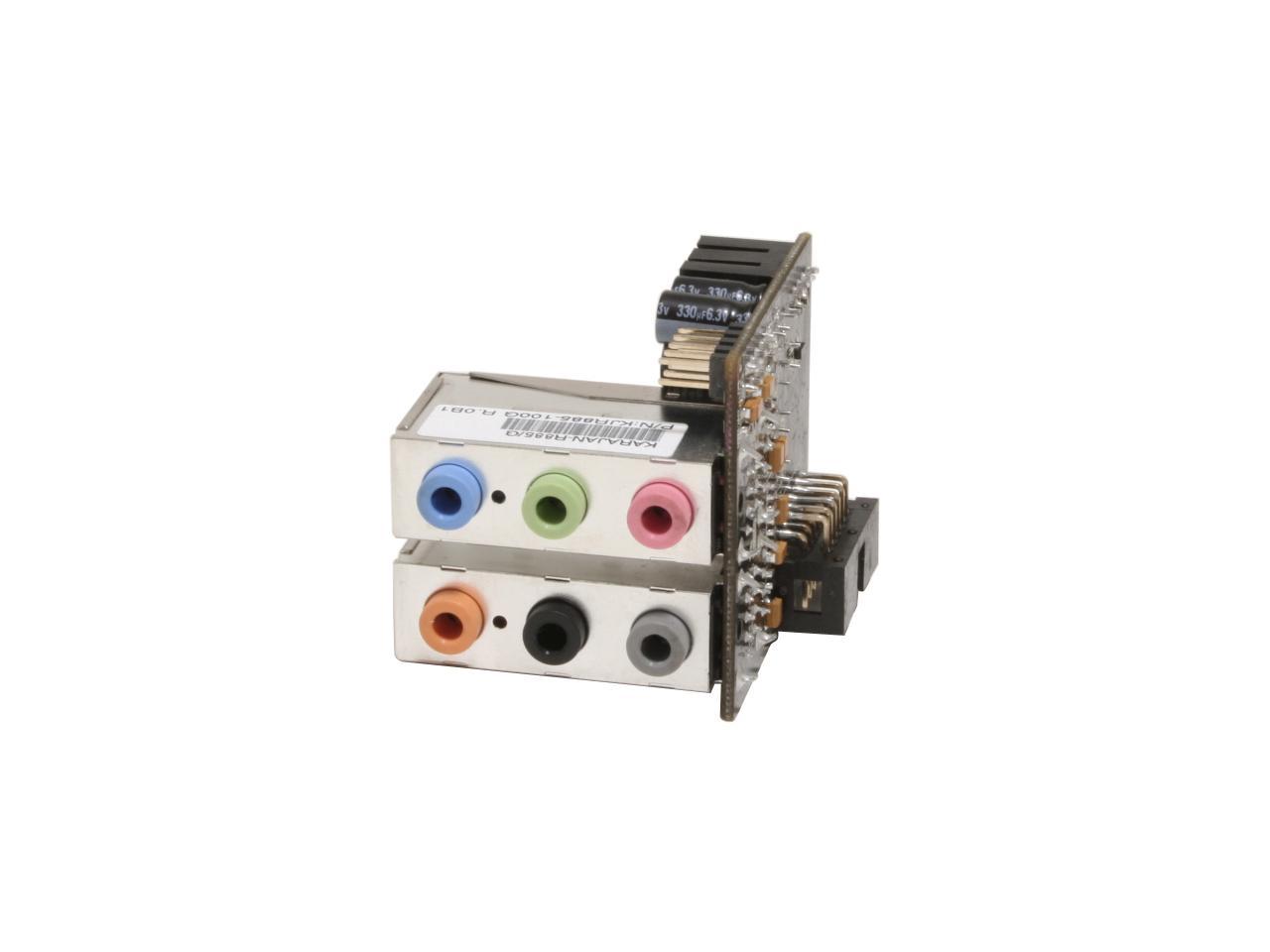 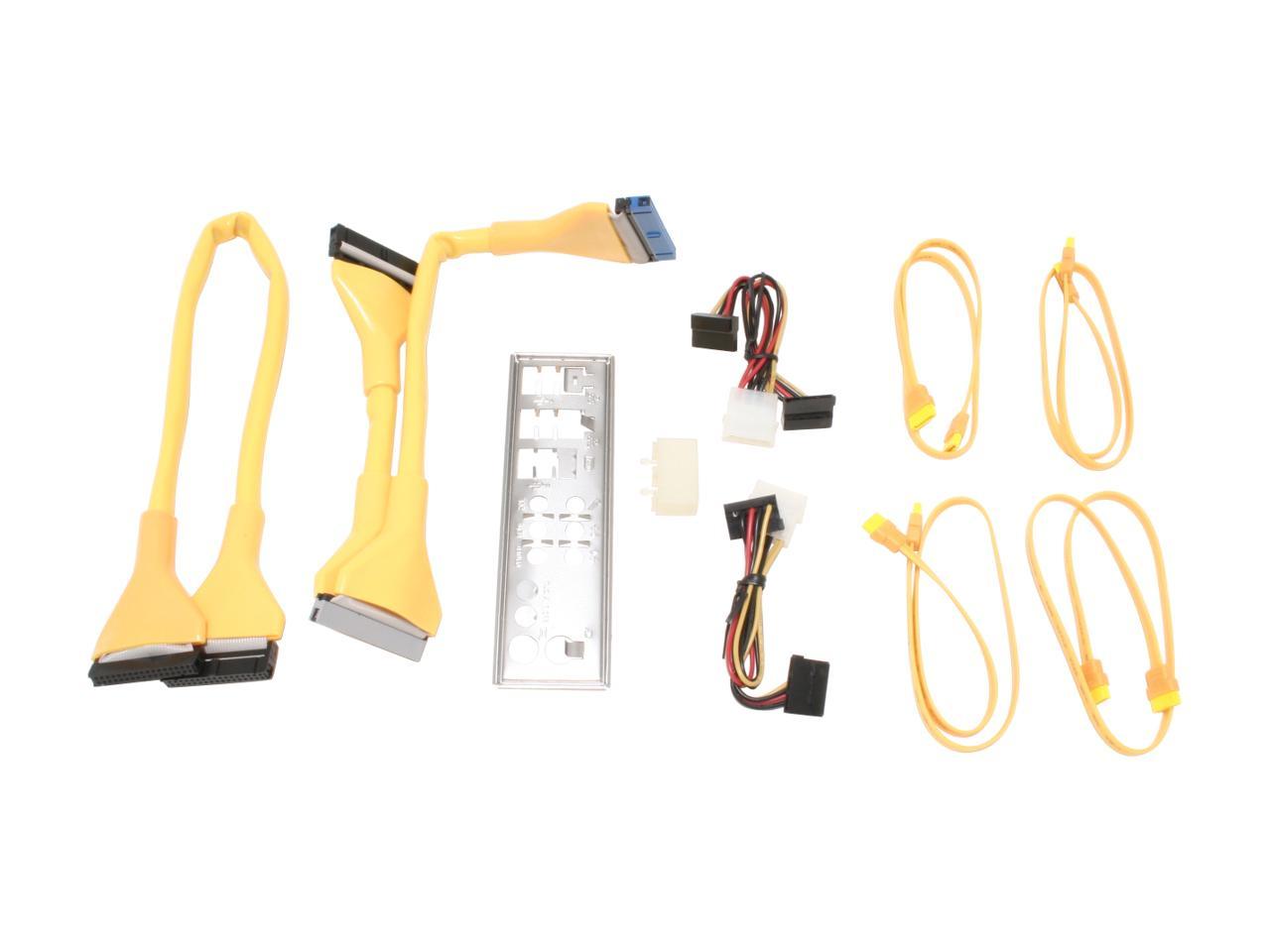 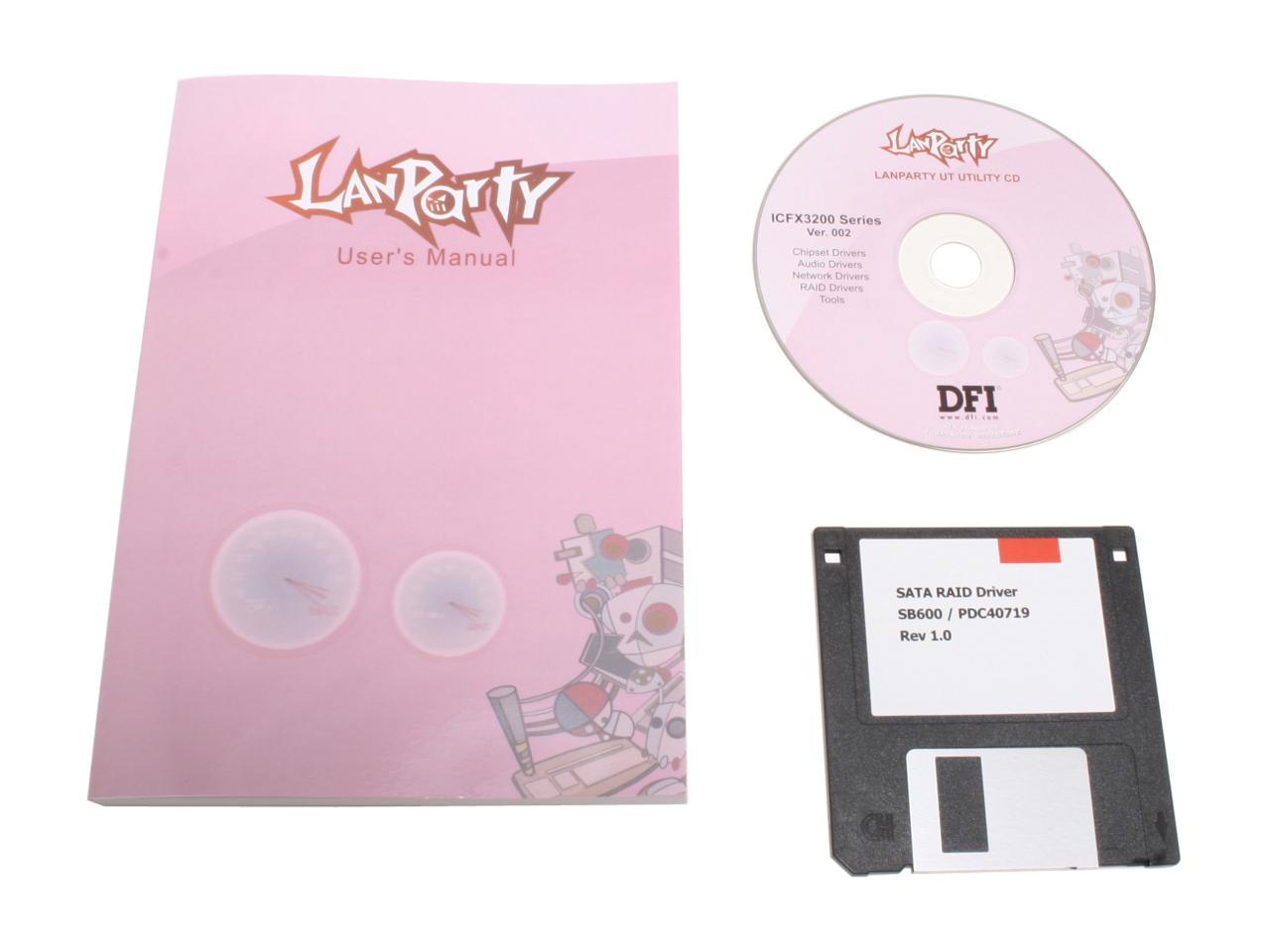 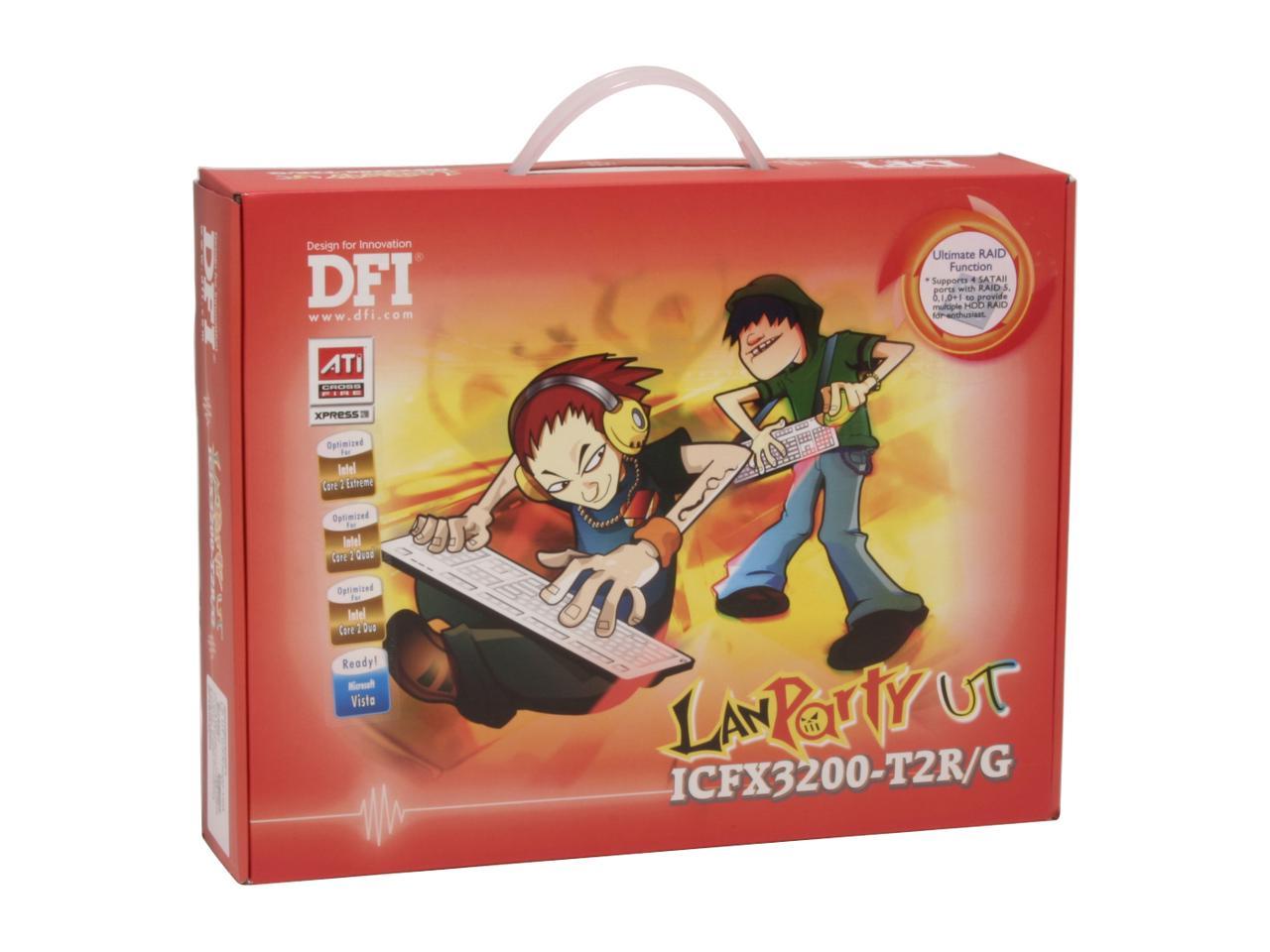 Pros: Stable right out of the box and nice board layout. Don't let this one pass you by. Boot on first try with GSkill 6400 and the bios options are endless so how much peformence you get from this board is up to you and your skills. Again this board will run right out of the box with no tweeks what so ever so do not let the full featured bios scare you off as it's a lot of fun.

Overall Review: Yes I wish it was SLI but it's a give and take kinda thing. Get this board while you can as this may be the first and last great Intel\ATI RD600 board you can own.

Pros: Great design. Had everything I was looking for. Great lay out, lots of fan headers, crossfire capable, and a very sexy look. Very reasonable price. DFI is normally a great company and are know for their high quality products.

Cons: The board was just not manufactured correcting. I have owned 3 of these boards and they simply don't last. My first board lasted nearly 6 months b4 it became unstable even at all stock speeds. I then decided to order another board after the huge price drop, my second mistake. That board arrived DOA, so i RMAed for my 3rd board, which arrived with a broken heat sink. I replaced it and the board ran great for about 5 days until I again experienced instability. At this point I gave up, its just a flaw design in the model of these boards.

Overall Review: I fully believe that 90% of the time the owner of the equipment, and not the equipment itself is at fault when something goes wrong. I tried just about everything in the book to make these boards work and they just don't. Replaced it with an Abit P35 and this new board has been running flawlessly with my e6750.ZERO PROBLEMS. I'm sry DFI, i love u but u really dropped the ball on this 1. It seems like with this board its the luck of the draw, but from my experience I highly recommend u stay away from this board. Was just a waste of money, time. Not to mention the stress and frustration in trying to trouble shoot this faulty product.

Cons: Northbridge gets very hot even without overclocking... temperature @ 63C+. With E6600 @ 3.93ghz, northbridge temperature went through the roof.. 80C+. CPU temperature was @ 60C+. Then the board died.

Overall Review: If you are like me, and you want good OCing with a quite PC, this board is not for you (I also do not want to spend the extra money for liquid cooling. It needs really good cooling on the northbridge and CPU. I went back to my DFI Inifintiy 975x E6600 @ 3.7ghz (on air and silent).

Overall Review: Using Hiron's Boot CD I was able to use both SATA controllers under Ghost and Acronis 8. Just thought some of you might like to know...

Pros: Best BIOS on any current mb Quite stable for a first release board Not plagued by issues as with 680SLI and some 965/975 boards CMOS Reloaded remembers all BIOS settings (except for date/time) Not overpriced like ASUS Striker

Cons: Stock RD600 heatsink is useless except for mild overclocking BIOS could still use improvement FSB "limited" to 511 Cannot GHOST images if any drive is connected to SB600 Still could be cheaper - anything over $200 for a mb is a steep price to pay

Overall Review: After experimenting with the GB DS3, Infinity 975X/G, eVGA 680i, and ASUS P5W64 WS Pro, the best experience I've had is with the ICFX3200. The board is quite stable at this point and there was never an issue I couldn't recover from. The BIOS is absolutely superb, if not complex. But this complexity allows for the best tweaking of any BIOS anywhere. Call me an old timer, but I still like to use the DOS version of Ghost which boots on a floppy (or CD if you create one). Anytime you have a drive connected to the SB600 Ghost becomes useless. I hope DFI corrects this. I have my E6600 Orthos stable (8+ hrs) running @ 3651 with my memory @ 1250, 5-5-5-15. COMPONENTS: Lian Li G70B, Tripp-Lite UPS, OCZ GX 850W, OCZ FlexXLC, X1900XTX @ 722/810, SB X-FI Fatality. Cooling: Tuniq Tower, Thermalright HR-05 on RD600, Thermaltake Extreme Spirit on sb, heatsink on clockgen chip, Zalman STG1. When I have time I will be posting my results in either or both the DFI Club Global and DIY Street forums.

Pros: The BIOS options, The PCB coloring, yellow UV highlights (could do without the orange though). Tweakability.

Cons: Oye, where to begin... The first and most major issue was recognizing my HDD, this was not even trying to put them in raid. Once I did finally luck out and it loaded to show HDD vista would not load unto it, would copy all files then hang. I then tried to BIOS update and suddenly the dam thing booted up and i went into BIOS, then saved and it rebooted; it would not go past that. So i became very upset and tried to flash an earlier BIOS; after that the system would not post. After a weekend of tweaking and fiddling i pulled the board, it never did load Vista, it did load XP at 1 point, but if it is going to be this much trouble I don't want to deal with it.

Overall Review: I really wanted to like this Board. Xbit uses this board to test almost all their ATI/AMD video products, so after having troubles with 3870x2 + 3850&3870 in three way on a P35 board I said this is the one. Well It was one colossal waste of time. Not to mention while pulling the board out and switching back to p5k board, at least its reliable with one card, some artic silver smeared on the pins of cpu,(my fault though became complacent) then on socket of p5k, now - more money for a new CPU and Mobo.

Pros: I liked the overall layout of the motherboard, designed for dual-slot video cards; the area around the CPU is largely clear; and the SATA/FDD ports are upright so they don't get blocked by the video card. The sound drivers are pretty decent, big improvement over my old board with SoundMax. Setup went flawlessly. I must have gotten the golden egg with these motherboards, so to speak, because my north bridge isn't running as insanely hot as others have reported. It's about 50c with the heat minator I got for free with a combo deal. Still gonna slap an MCX159 on it, though.

Cons: There were some problems with the layout, however. The front panel 1394 connector sits right under the first video card slot, so you have to connect that before you install your video card. My front panel sound cords weren't long enough to reach the sound module, so I don't have the front panel audio ports. Also, when I boot into Windows, it searches for drivers for the audio controller, even though it's installed, which is sort of annoying.

Overall Review: Overall, it's a decent motherboard for the price. I'm not overclocking anything with this board, so that may be why my north bridge temps are relatively low. Also, the memory slots, PCI/PCIe slots, and SATA ports are all made out of UV-reactive material, so the board looks kind of cool in my case.

Cons: -Miserable memory speed (ATI's fault) -8GB RAM only shows 7.5GB in BIOS, no workaround (probably ATI's fault) -Promise controller delivers lackluster performance due to being PCI and not PCI-E -Full length slots either run x16 for one, x0 for another, and x2 for last slot; or x8 for first two and x2 for last. Not a good crossfire mobo for this reason. -BIOS will not load with my Logitech G15 connected -Chipset overheats even with Heat Minator, 60c Idle!!

Overall Review: DFI has done their best at polishing the t*rd that is the ATi Crossfire Xpress 3200 Chipset. I really home AMD/ATi continues making Intel chipsets, but actually starts making them good. The memory controller performance in this board is horrible and not gaming grade at all. Before I put the heat minator on, the northbridge ran at 75c idle with no overclock. I put that bad boy on WITH a fan, and it lowered it to 60c... or still 10c hotter than my cpu idle. Overclocking memory on this board is impossible. BIOS has tons of options for this but the chipset is heat and hardware limited. It's like someone offering you infinite amounts of the best tasting candy, but the wrappers are all glued on so it's useless. You get tons and tons of options but the lame ATi chipset hardware ruins it. DFI has done their best and my hats are off to them for this engineering marvel. Also, price is definitely right.