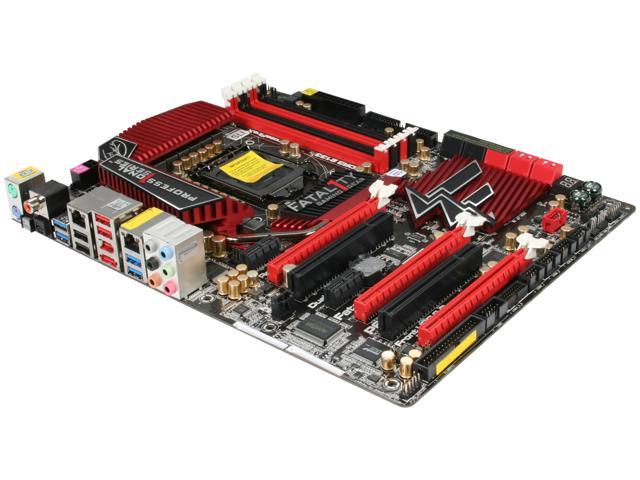 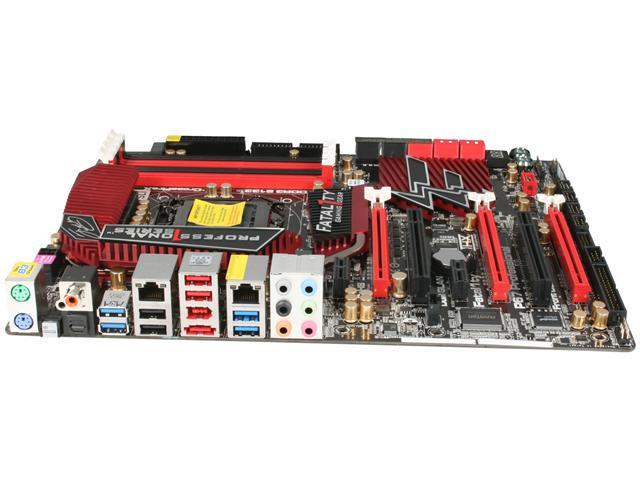 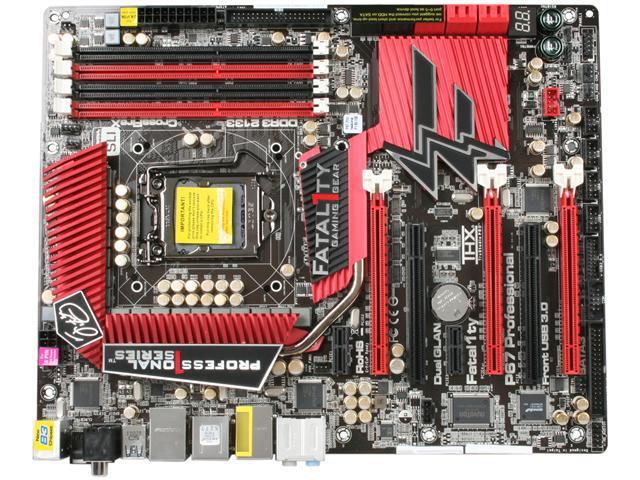 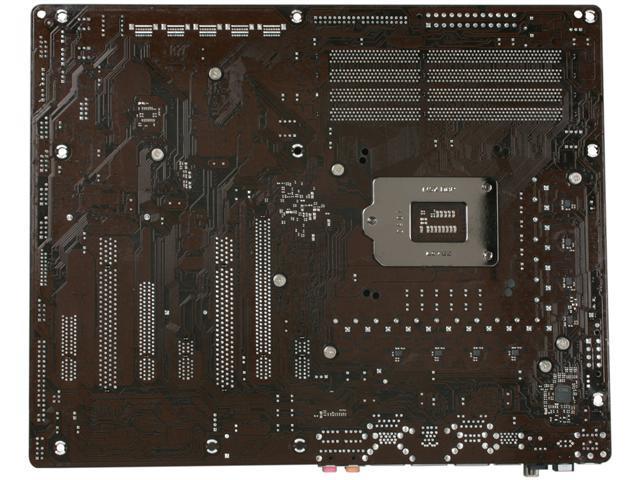 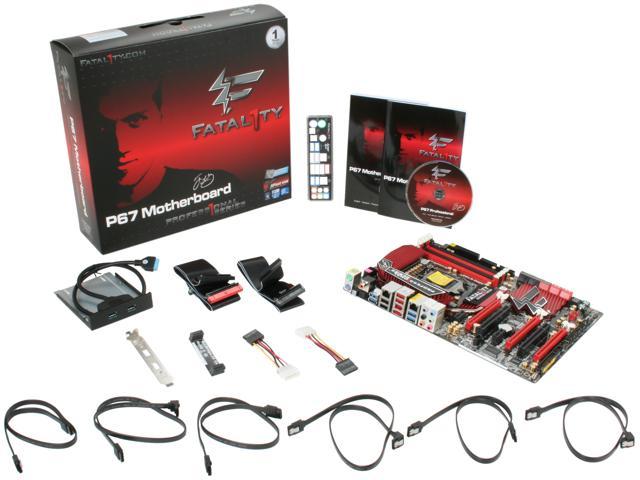 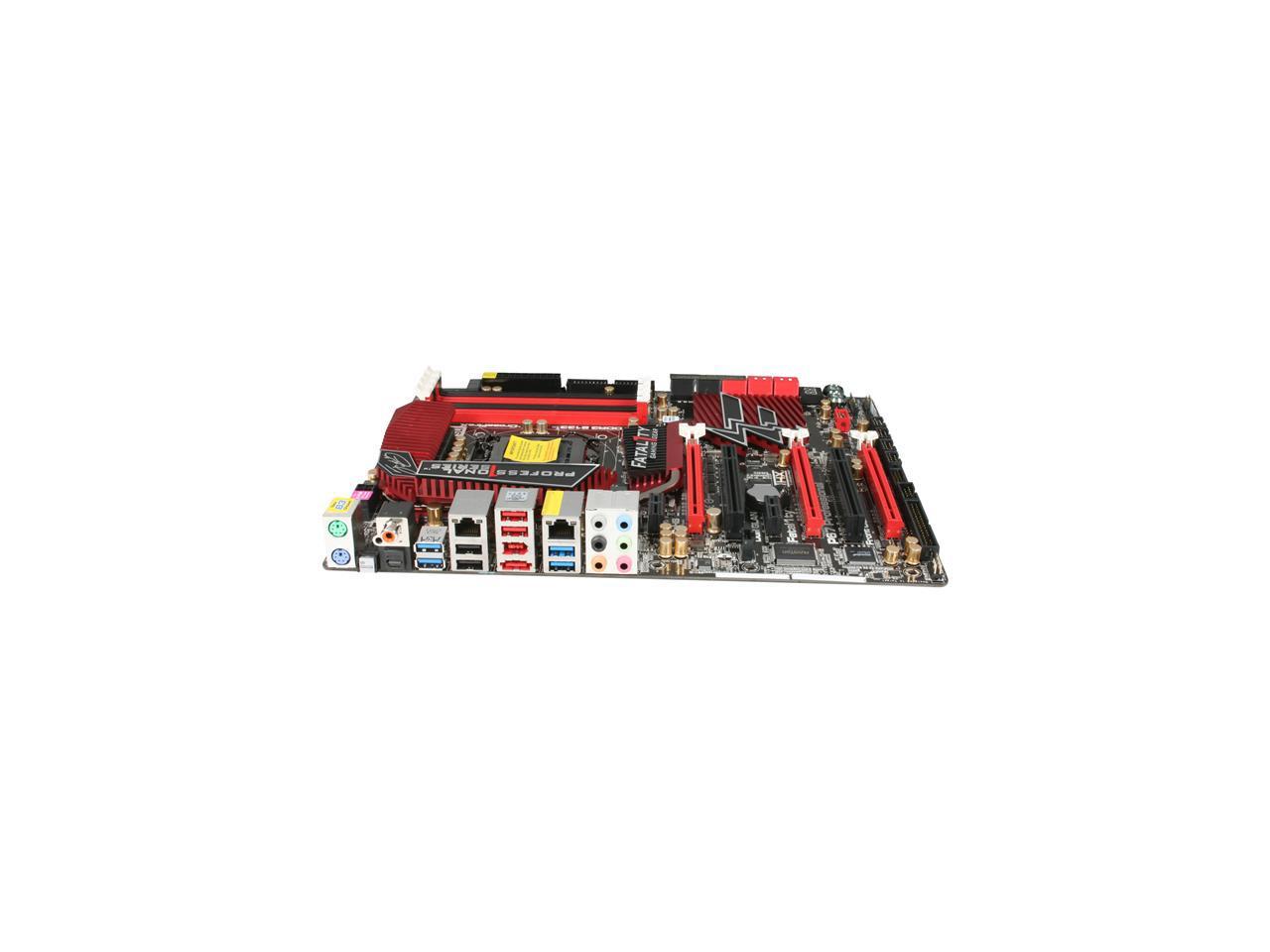 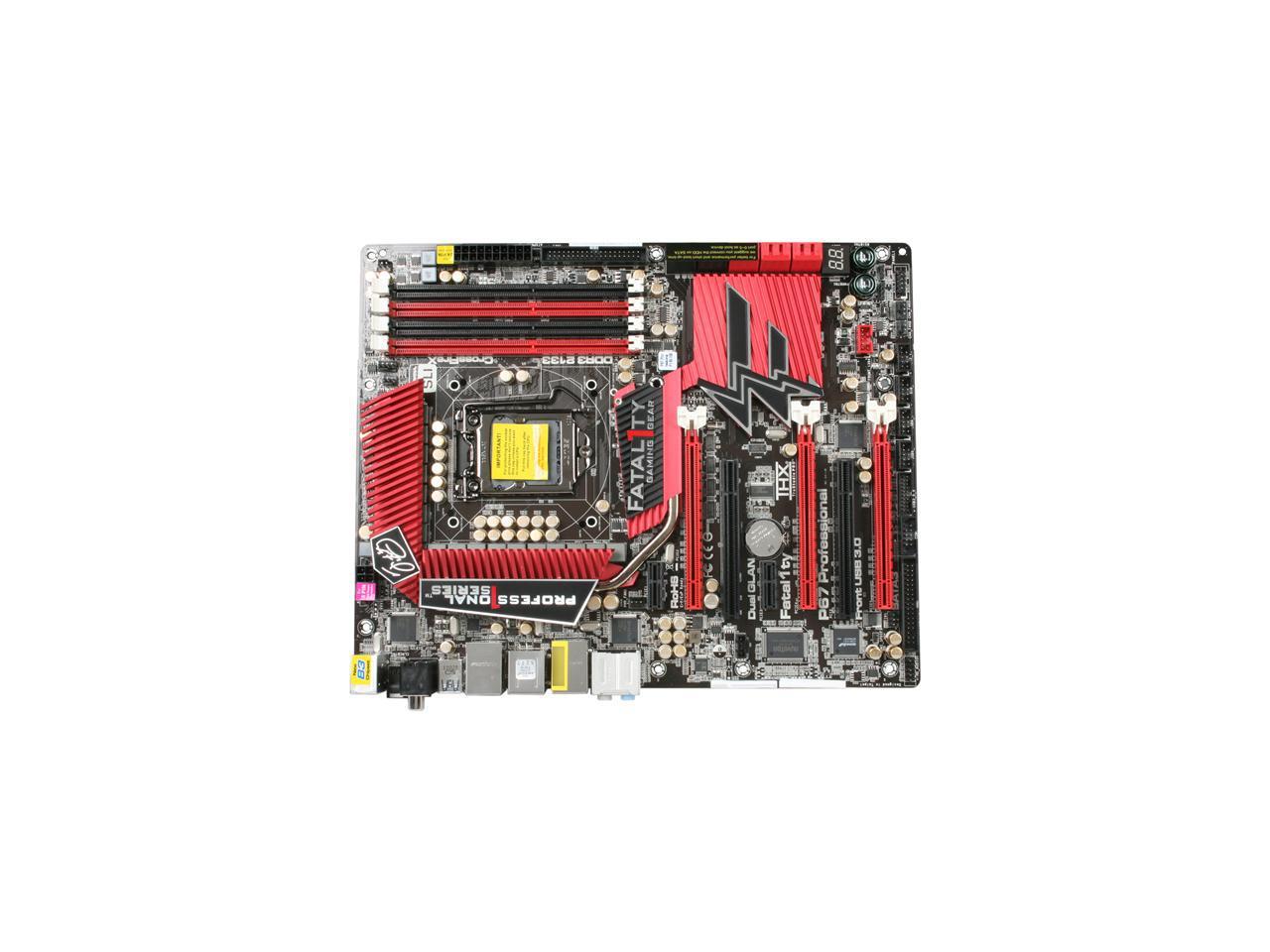 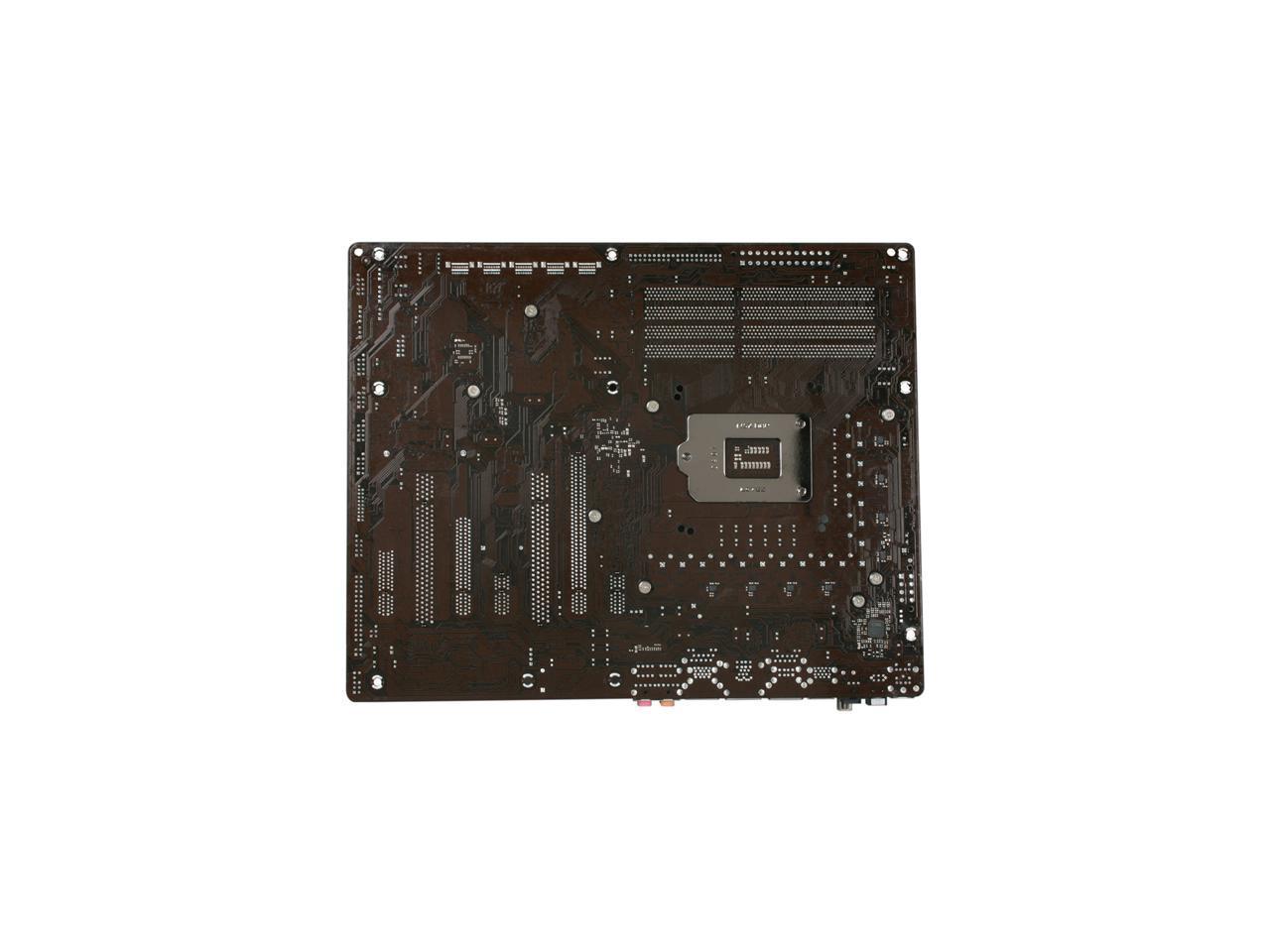 (68) Write a Review
OUT OF STOCK.
Specs
Reviews

Learn more about the ASRock Fatal1ty P67 PROFESSIONAL (B3)

Pros: 3 GPU x16 slots. Looks beautiful in my Antec DF85 with red/black combo. Not heavy. Easy and simple BIOS system. Not too big or clunky in the DF85. Came with easy to read and understand manual. 10 mounting pins. Easy connectors and leaves plenty of room. Quick RAID setup.

Cons: The only thing I don't like about this mobo is the boot up process. I used the M1/2 SATA connectors and had to enable boot from them for cd drives. Subsequently, it takes a while to boot. Expensive, but, hey, it's worth it.

Cons: They do go a bit overboard with the Fatal1ty branding, but then again it IS a board endorsed by him. The price may seem high to some, but the overall package of features and quality are worth it.

Overall Review: This was my first LGA1155 build and it was easy. The only part of the build that was scary was locking in the processor(CRUNCH). I think that ASRock will get noticed by this board for being more than just the kid brother of ASUS.

Pros: I bought this board because the Asus Extreme III was continuously out of stock and I dont regret it. Love the color scheme! Love the abundance of USB 3.0 ports! Mouse support in BIOS. Lots of features!

Cons: You will NEVER forget that this is a fatality board! The name is one the board 30 times and its literally on every piece of software included. The BIOS also has a huge picture of Fatality in the background that stares out at you.. Its weird. Also only one PCI-E slot will run in 16x.. Not a huge deal though. The pros definitely outweigh the cons.

Pros: Just about Everything ,the packaging was awesome the look is awesome and the performance is awesome. This is my first motherboard install and the instructions were clearly laid out. The manual was very helpful. The software for overclocking in windows is excellent and easy to use. This board also lets you use your 775/1156 heat sinks which is great because it saved me from buying another one. I will report back later after I get some benching done as well as overclocking my 2500k. P.S. the front USB 3.0 with ssd tray rocks!!

Cons: The dudes face on the background of the bios, they sorta over did it with that. The price might be a little too high compared to what other boards are offering for less.

Pros: First off let me start off by saying that this board looks incredible. I was thinking about getting the ASUS Maximus IV Extreme, but opted for this board because of its relatively similar features, and similar color scheme. This is one of the few quality Red&Black Motherboards that come with a nice feature set and isn't outrageously overpriced.(Cough asus) Plenty of SATA 6.0 ports more than I know what to do with..

Cons: ASrock customer support is non existant. The only real flaw I would like to point out about this board is the Fatal1ty branding. I'm not that picky about it so the Fatal1ty lettering on the board itself, and programs/bios doesn't bother me much. **BUT going as far as to put his begotten face on the BIOS screen itself is outrageous and annoying**

Overall Review: I had to RMA my first board because of a faulty southbridge chip, but DR debug really helped me out in the trouble shooting process. I also sneezed while putting the second board in and ended up bending one of the audio pins for the front panel -_- bent it back into place but i get a bit of static, but that's completely my fault.

Pros: --Easy build, POSTed on first boot and haven't had any problems since. --First time overclocking so I used the one-click EZ OC feature in BIOS. PC was stable at 4.6GHz after running Prime95 for 2 hours, so I use this stock OC 24/7. With after-market air HSF, core temps got up to 80C while testing but in daily gaming they stay in the 50's to low 60's depending on room temp. --Happy with this board and very relieved after reading the problems some other people have had with their P67 boards.

Overall Review: If you don't want to look at Fatal!ty's face every time you start your computer, you can go into the BIOS Boot Screen and change the Full Screen Logo option from Enabled to Disabled. This will cause the normal BIOS POST messages to display instead.

Pros: First of all you have the sexy red/black color combo with the sleek heatsinks. Overclocking is amazing, i5-2500k at 4.2ghz on the wimpy stock cooler havent seen temps over 52c with 72f room temp. havent seen NB/SB temps over 29c... was going to pull off the heatsinks and replace stock thermal paste with gelid extreme but haven't seen a reason to.

Cons: the usual. doesnt dispense monster or make me steak and wasnt free, but hey can't get everything right?