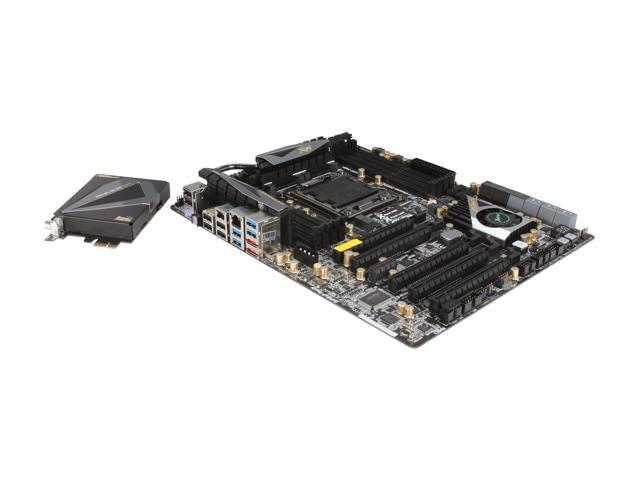 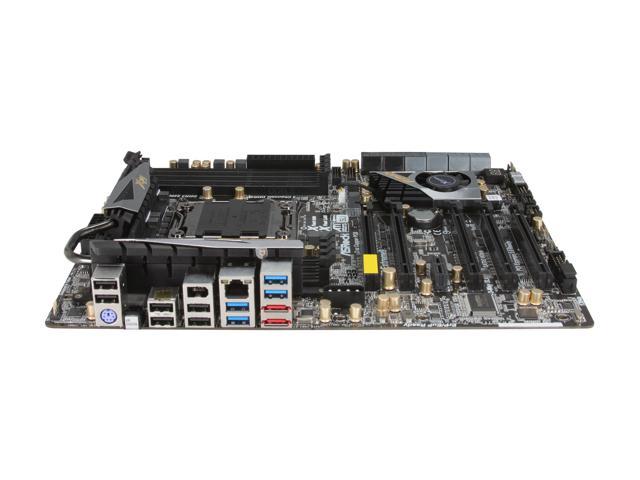 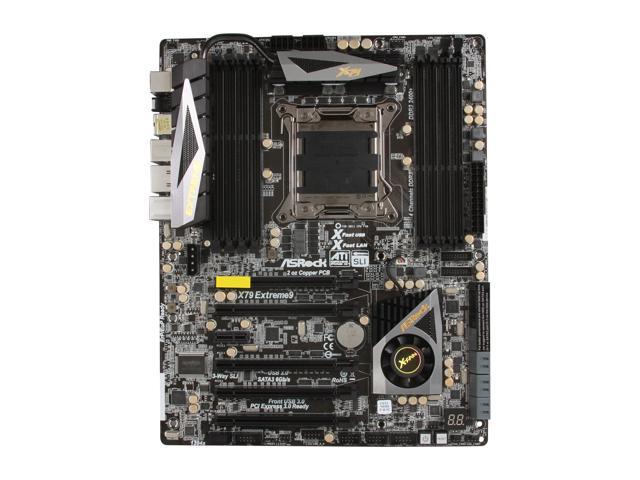 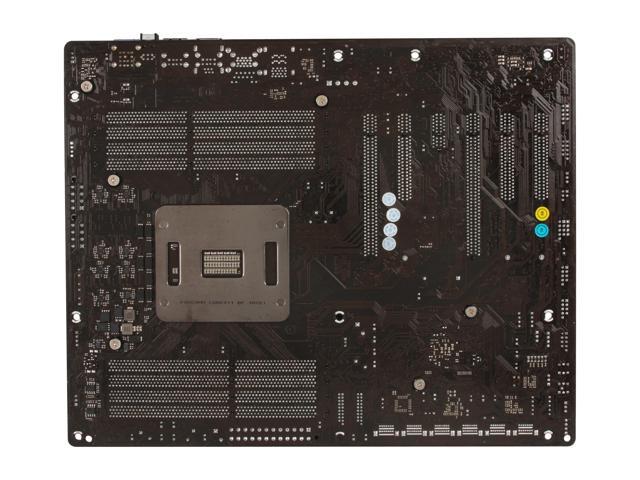 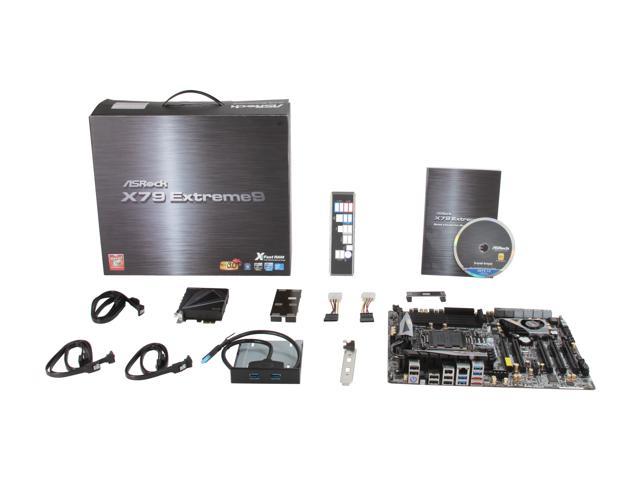 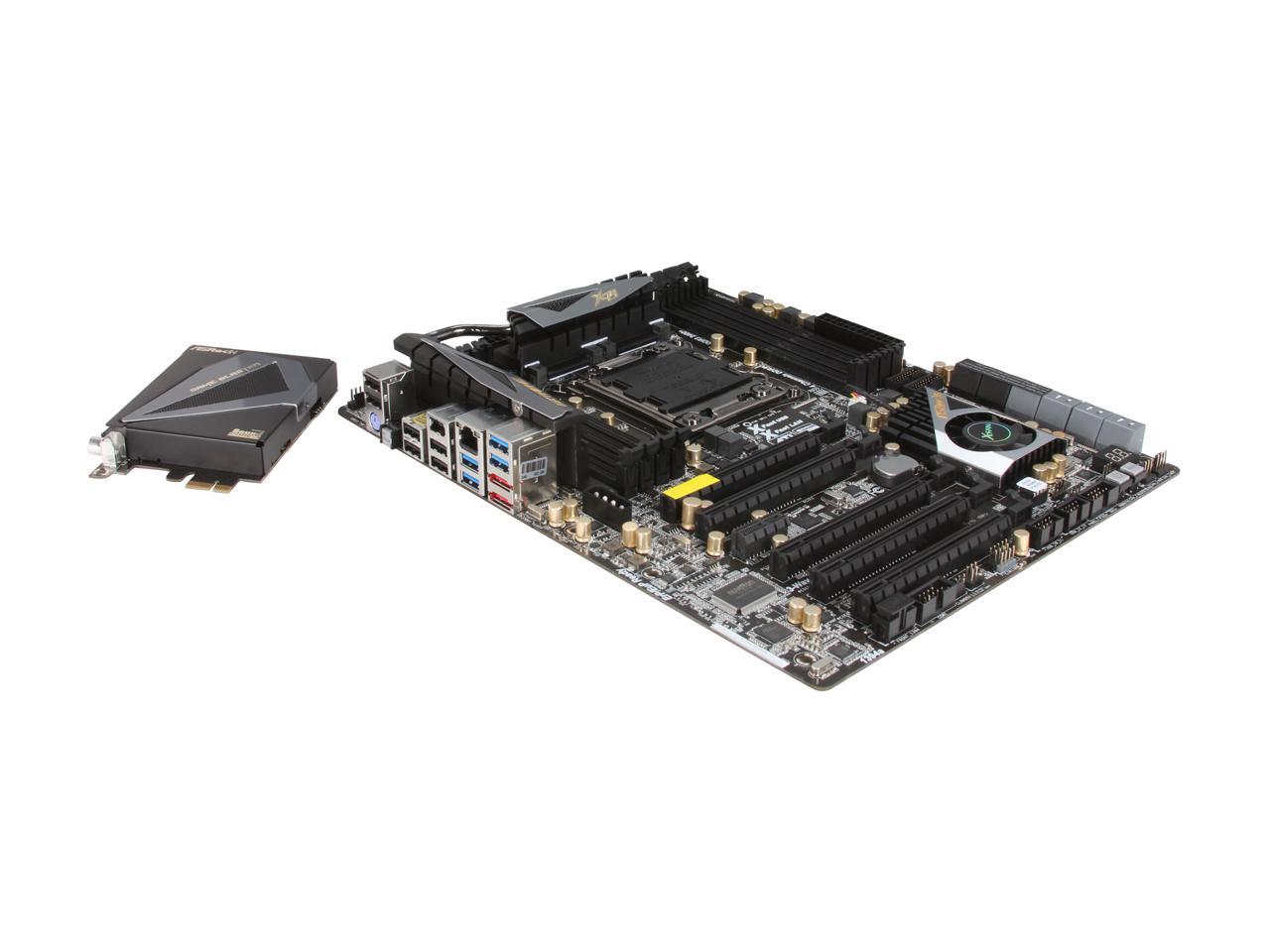 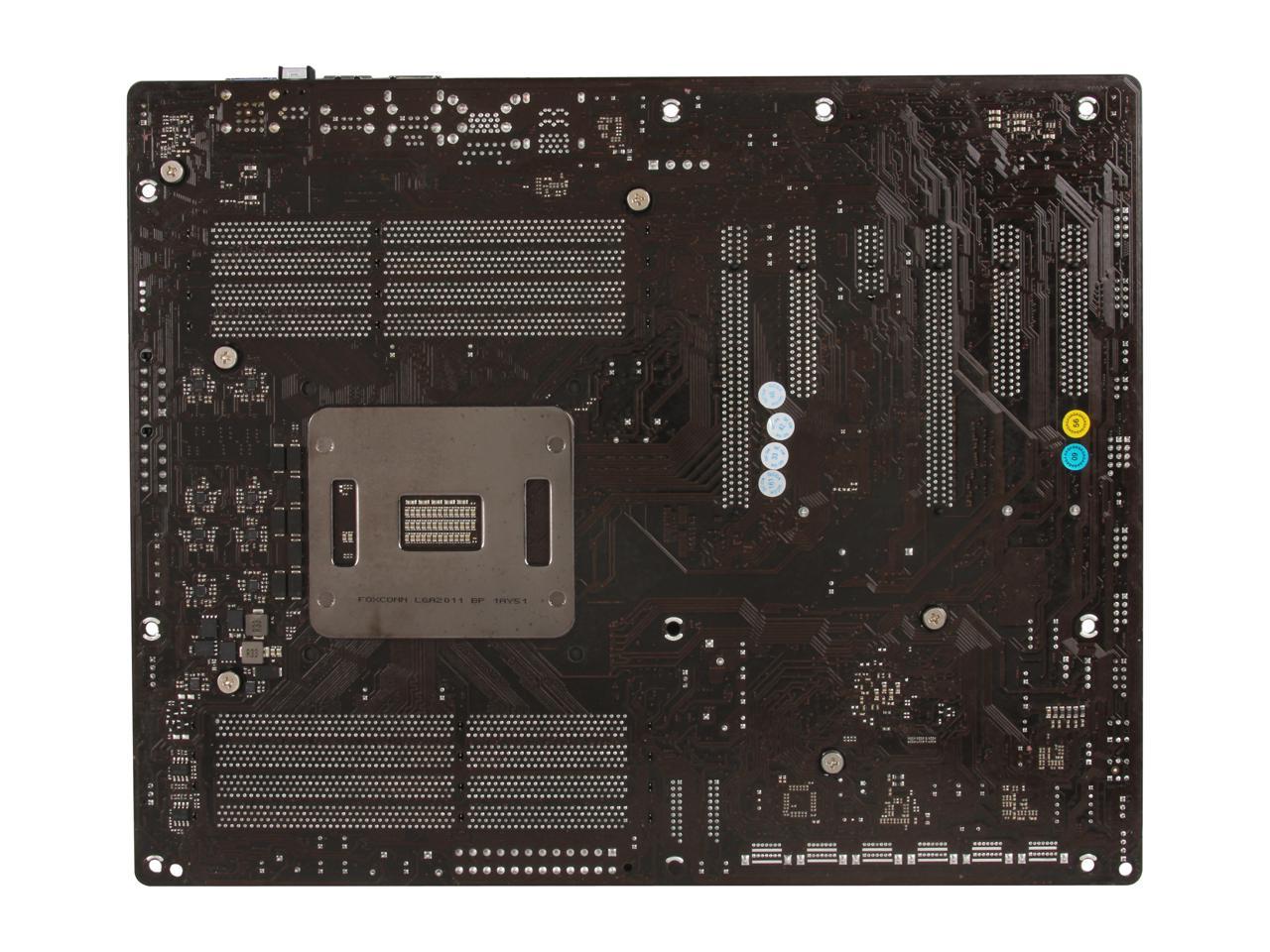 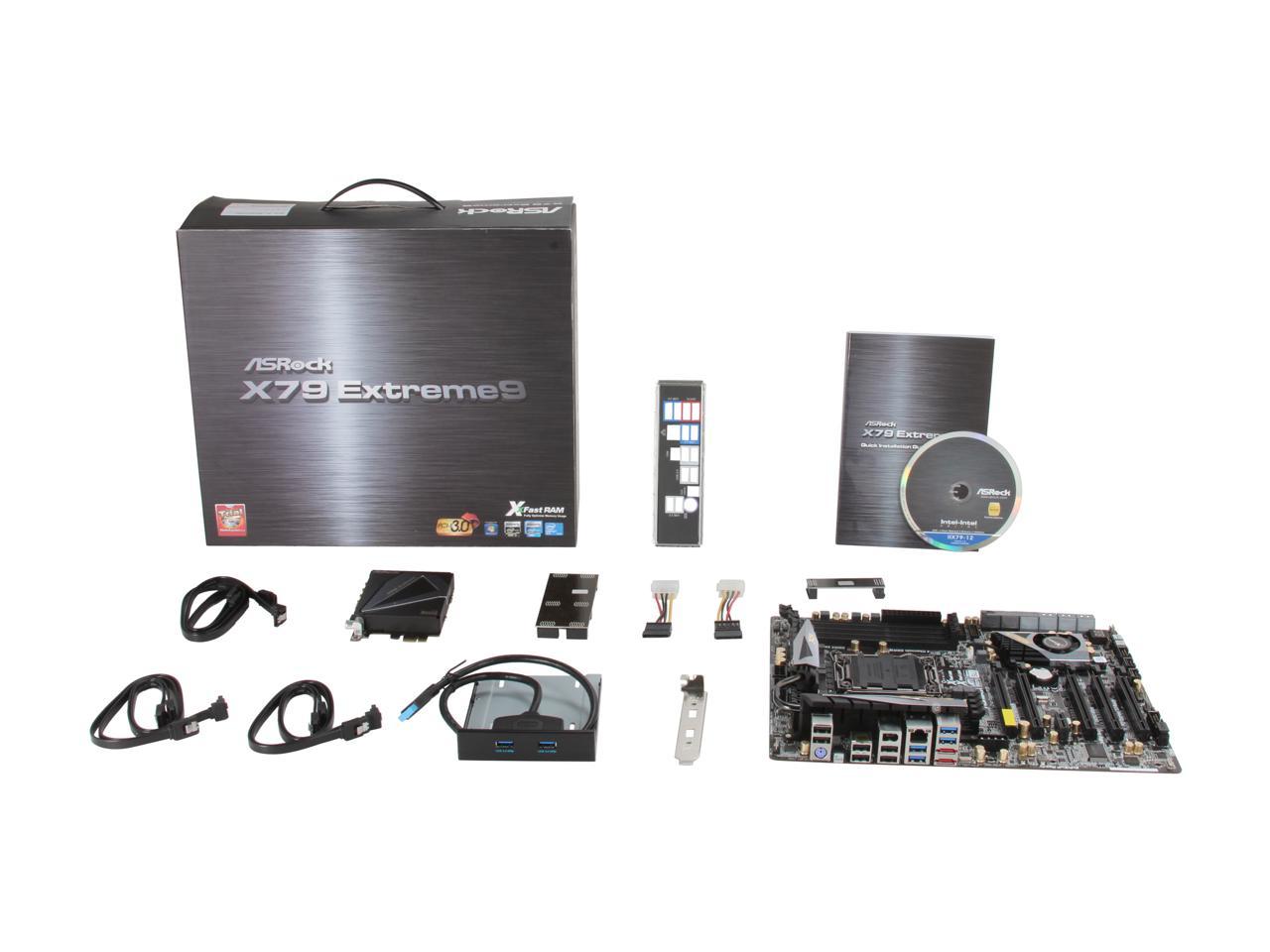 (60) Write a Review
OUT OF STOCK.
Overview
Specs
Reviews


The ASRock X79 Extreme9 isn’t just a well-priced feature rich offering like we are used to being, it’s all that with the ability to offer monster performance.

Bradley A.
Ownership: 1 day to 1 week

Overall Review: I used an ASrock board back in their beginning. With out issue, But didn't use another til this one. Really nice feel to it. Not as many bells and whistles as some others. But I don't them anyway.

Pros: In my opinion best 2011 MB out there. I also own the 1155 extreme 7. Both look great, and perform even better. Nice bios. Overclocking is great. More sata ports than most. Has pretty much everything you could ask for. Extreme 7 was first Asrock MB I had used. Was so impressed when it came time for a 2011 MB I went straight for this one.

Cons: Only one. The audio card that came with mine did not have the mounting bracket with it....

Overall Review: If your thinking about trying a Asrock board do it. I don't think you will regret it.

Pros: Pros are everything you see in the description - excellent specs, insane # of SATA/USB3 ports/etc. Despite my INSANELY bad experience, this board still feels very well engineered. Installation of drivers and such is a breeze. But there are some GIGANTIC issues with the BIOS for this board - especially (apparently) with the C2 3930Ks. Tech support via ASRock's approved email/web page is useless. They just send ridiculously stupid boiler-plate messages back to you after a few days and apparently either can't read or chose NOT to. (They told me to do what I had exactly described to them in terms of troubleshooting and what I've listed below). So, Pros are that this is a great board - if it works, and you very well could have serious issues with the Bios.

Cons: First motherboard was DOA. Kept getting Dr. Debug 0x67 on startup. Wouldn't even post. I pulled ALL components down to just Mobo, CPU, 1 stick of RAM, and PSU. Disconnected all USB, system headers/etc. Still got 0x67. Tried single stick of RAM in all slots - just in case documentation was wrong. Either got 0x55/53 as expected when RAM in wrong-slots, or 0x67 when RAM in same Slot. Tried different stick of RAM. Tried different PSU. Tried DIFFERENT RAM from list of known-working RAM. Still 0x67. New Egg was awesome and got me a second board within 1 day. It booted fine - with 1 stick of RAM. When I put all 8 in, I got 0x67. I did some more testing. Found I could put sticks into A1,A2, B1, B2, D1, D2 and run 24GBs of RAM. But as soon as I put RAM into C1/C2 machine would no longer post and I'd get 0x67. Tried just 4 sticks of RAM (A1,B1,C1,D1). No dice. Pull RAM out of C channel, works fine.

Overall Review: Eventually I CALLED ASRock. (Found their number online.) Within about 12 seconds I was talking to someone who knew what he was talking about. I explained the process above. He confirmed what I suspected: This is a bios issue. He pointed out 'beta' bios downloads on the ASRock website that I had missed. I tried all of those. Still no luck with the C1/C2 channel preventing the board from POSTing. BUT, I really like this board ENOUGH (even with these major warts) that I'm now going to assume that ASRock WILL eventually sort out the bios. So I've decided to keep the board. After a few days or running it - it IS amazing. I just wish, obviously, that the BIOS was more mature. All in all, this _IS_ a great mother board. BUT, ultimately, $350 is too much to pay for their default/lame tech support and for such immature bios. If their BIOS matched their mobo and if they made tech support more accessible, this would be a STELLAR motherboard.

Pros: Works like a charm! I have yet to overclock but everything has booted up and has been recognized with 0 issues whatsoever.

Cons: One slight issue I had was when I installed 2x EVGA GTX 560 ti 448 core video cards. The cooling housing is rather wide and when I installed the top most card it would rub up against the ASRock Game Blaster audio card. I thought I was going to have to return the video cards but after a little playing around, I was able to just barely fit it in. It is pressing down slightly on the audio card but there doesnt seem like much pressure on it to worry about. Just a heads up if you plan on using those 2 graphics cards.

Pros: Has everything you would want in a high end motherboard and then more. Ton's of sata and PCI slots. Dual nics for bandwidth aggregation. Awesome design. Great layout.

Overall Review: The first one I received from newegg didn't last to long. Stopped posting after a day. I RMAed the board for a replacement. Got the replacement and went to work. At first it wouldn't post with all four sticks of ram. So I took the ram and tried one stick at a time revealing that only certain slots worked. So I got online are read up and found out it was bios issue. Indeed it was, I updated to the latest bios and big mistake I could only get one slot to work. I then down graded to a RC bios That works perfectly and slots works and Now I'm a happy owner. I want to over clock but might not push my luck. Rig consists of: I7 3820,Noctua DH-14,CM storm trooper,32GB G skill ripjaw X 1333mhz, Diamond 7970, M4 256GB raid 0 on lsi 92604-i, CM 1200 watt

Pros: - Overclocks the 3820 to 4.7 @ 1.300Vcore - Runs 2133 ram at 2200 without problem - Sound / Lan riser is neat, no idea if it makes anything faster, but it sure makes me feel cooler. The 5.1 sounds great through a home theater with the optical output. - Looks great in my case window - PCI-e spacing is thoughtful of the riser and gives enough room to run 3 dual slot cards with some room for them to breathe. - SSD Caching works well and gives similar performance to the SSD caching on z68. Documentation for setting it up is terrible and almost hidden, but after its configured it works well. - First lga2011 board I have received that was NOT DOA on the first try, major props. -Plugged all my stuff in, fixed a couple setup bugs and I was done, painless. You really get what you pay for when it comes to motherboards, don't skimp out if you're building your first system or upgrading as you'll end up paying the difference further down the road.

Cons: A little confusing getting all the bugs worked out. Hanging up on waking from sleep. Audio coming from the game blaster would cut out at random. MoBo fan changing RPM sporadically. Turns out it was all driver related and after some reading and updating it was all running smoothly again.

Overall Review: Major props to ASRock tech support. Having issues with it posting initially, called tech support and was talking to a human in less than 30 seconds. The rep was helpful and spoke English well. Turns out I'm clueless and misread the manual and put the ram in the incorrect spacing. Then a quick bios flash and things were fixed. By far one of the better tech supports I've dealt with.

Pros: Support for both Xeon and i7 Support for SLI/Crossfire Dedicated soundcard Lan Teaming 64GB of Memory 8X8

Cons: Support for only 3 gfx cards Ethernet port dies quite frequently Not a stable board, I've overclocked for years and never come across a board that even basic 1GB or even a few hundred MHZ causes the board to become unstable and freeze upon boot.

Overall Review: This is a decent board but it's not a great overclocker, it's not a stable board. I'm surprised it lasted as long as it did, mine still works but it'll be recycled once my upgrade comes in. In 2014 you have much better options, but I've had serious issues with asrock and I'm not wasting money on the extreme 11. I'm much more confident with asus and would either get a Rampage IV Extreme Black edition or build on a workstation board like the p9x79-e was. This was a great board when it was released a few years ago but I can not recommend it from the boards released since 2012, I can not recommend this product.

Pros: Nothing but good things to say about this board itself. It has a lot of internal SATA ports, extra USB 3.0 ports with a front 3.5" mount, looks amazing, and installed great with no problems.

Cons: Only con I really have is with the included sound card. The game blaster really did not do what I was looking for. It has a customization capability to change the ports to different outputs or inputs but they are all preset. You cannot change them individually. I play MMO's and like to run my headset by itself on the team communication, while the game sound plays through the speakers. I could not make this work without some rigging of the wiring setup. When the volume gets high, such as when playing music loudly, the front and center sound get muffled and garbled. If this card had a software setup that would allow individual setup of each port on the card, it would be much better.