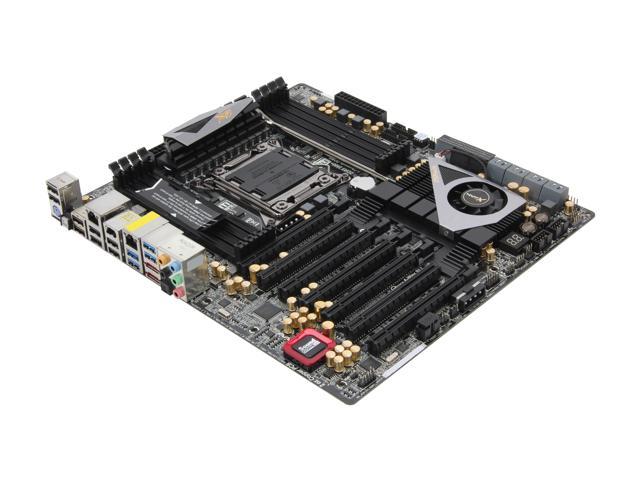 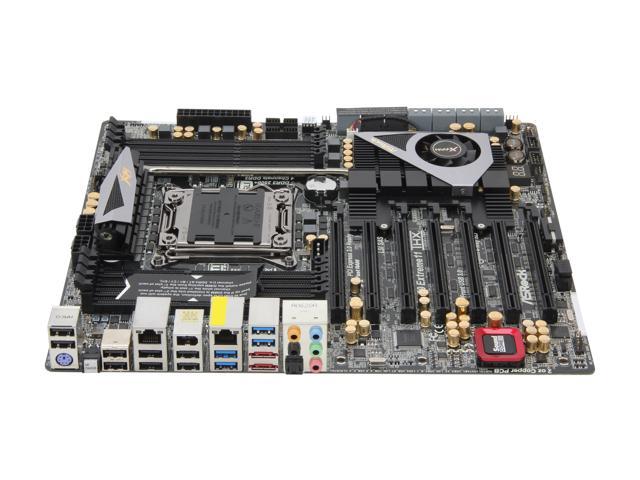 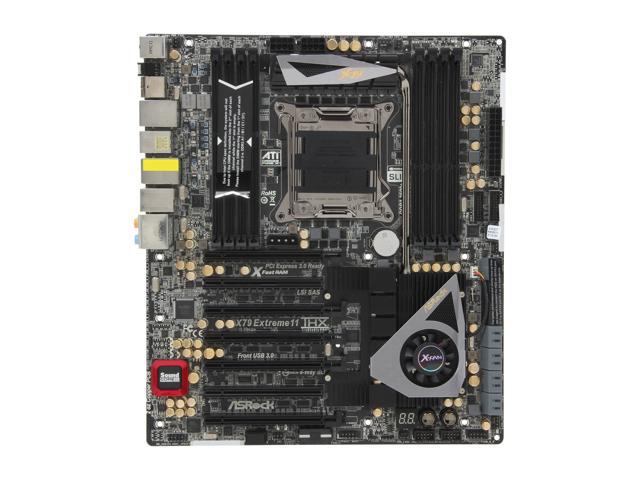 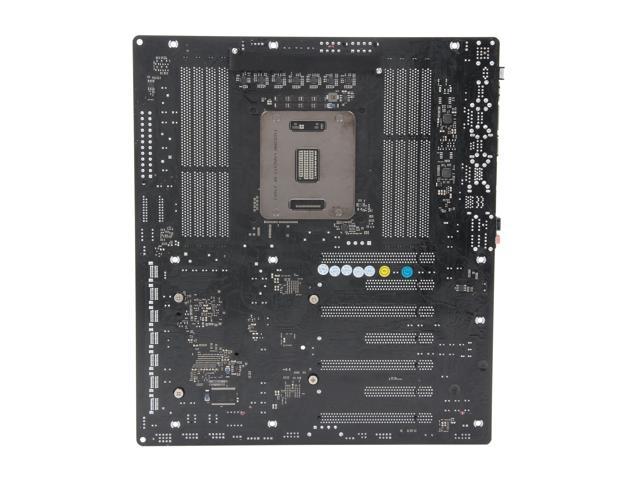 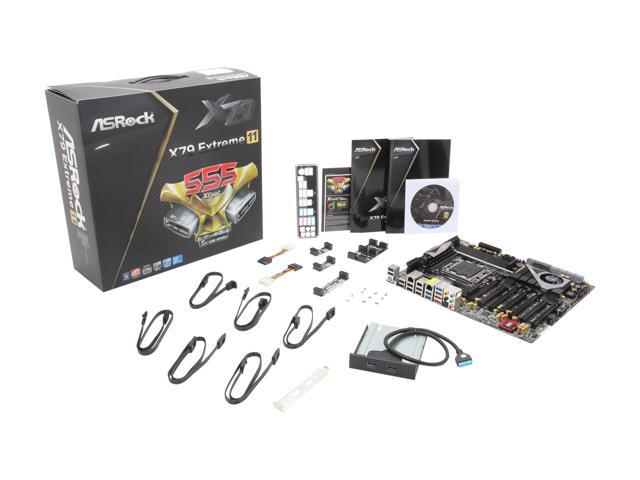 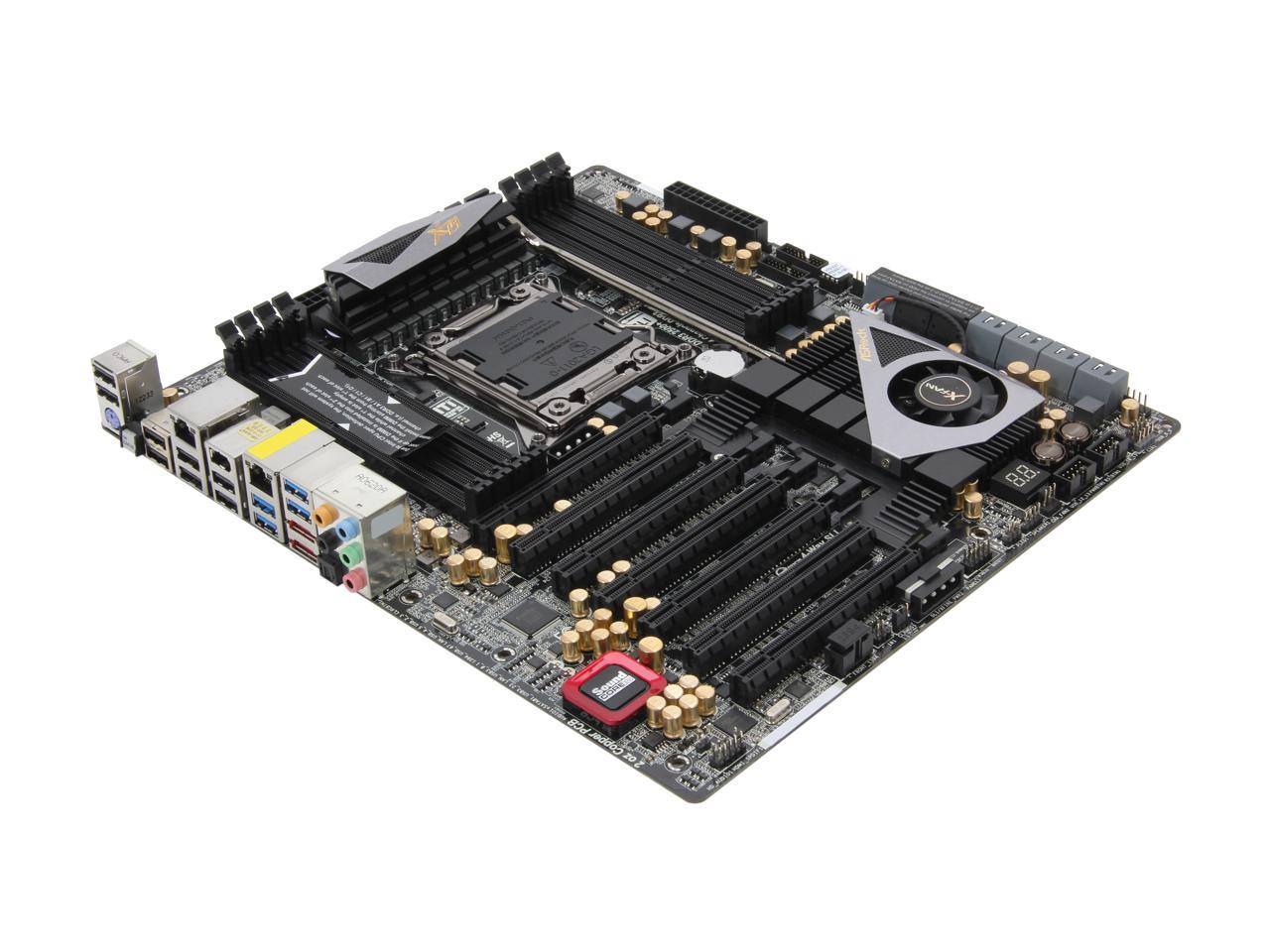 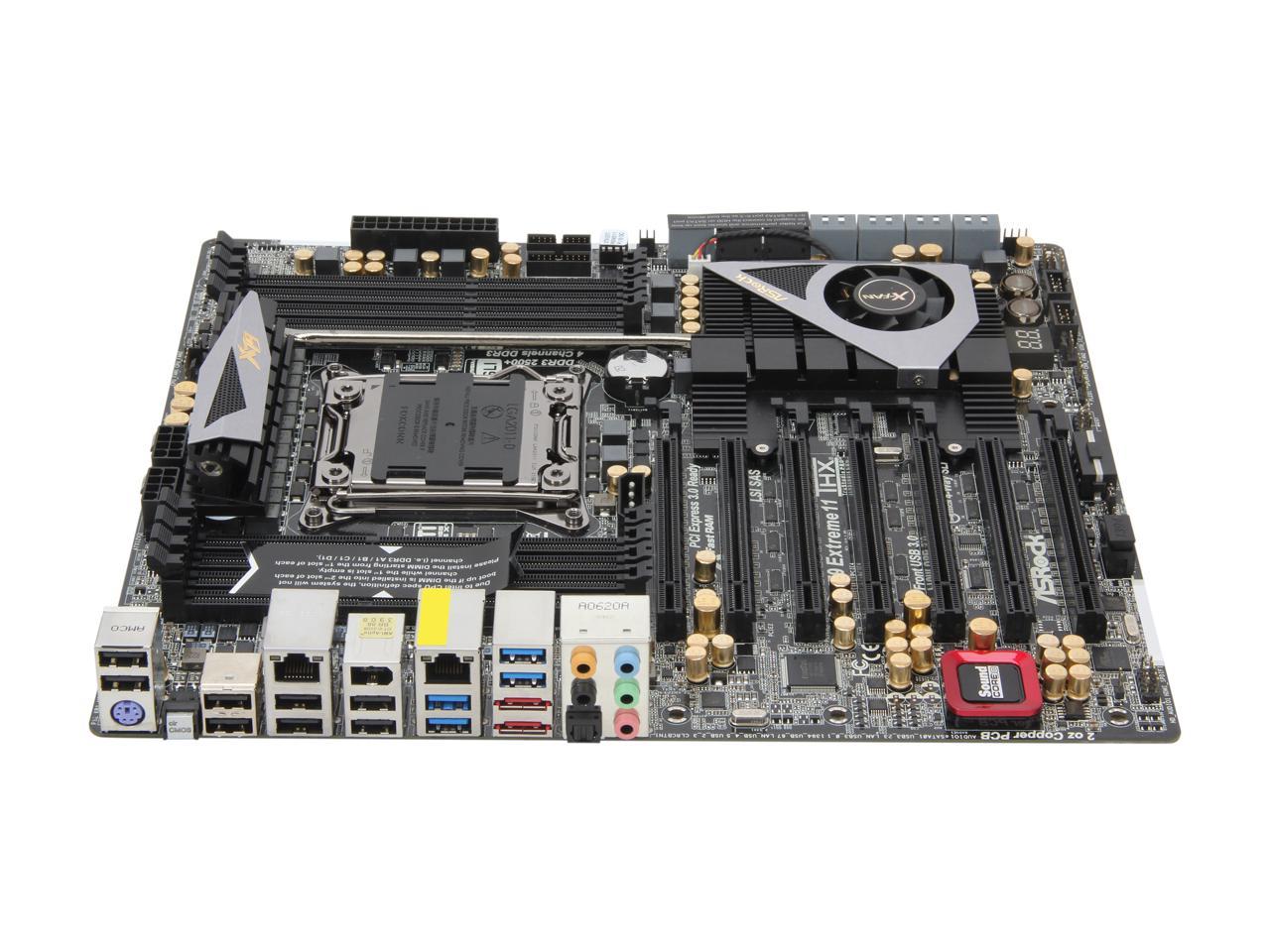 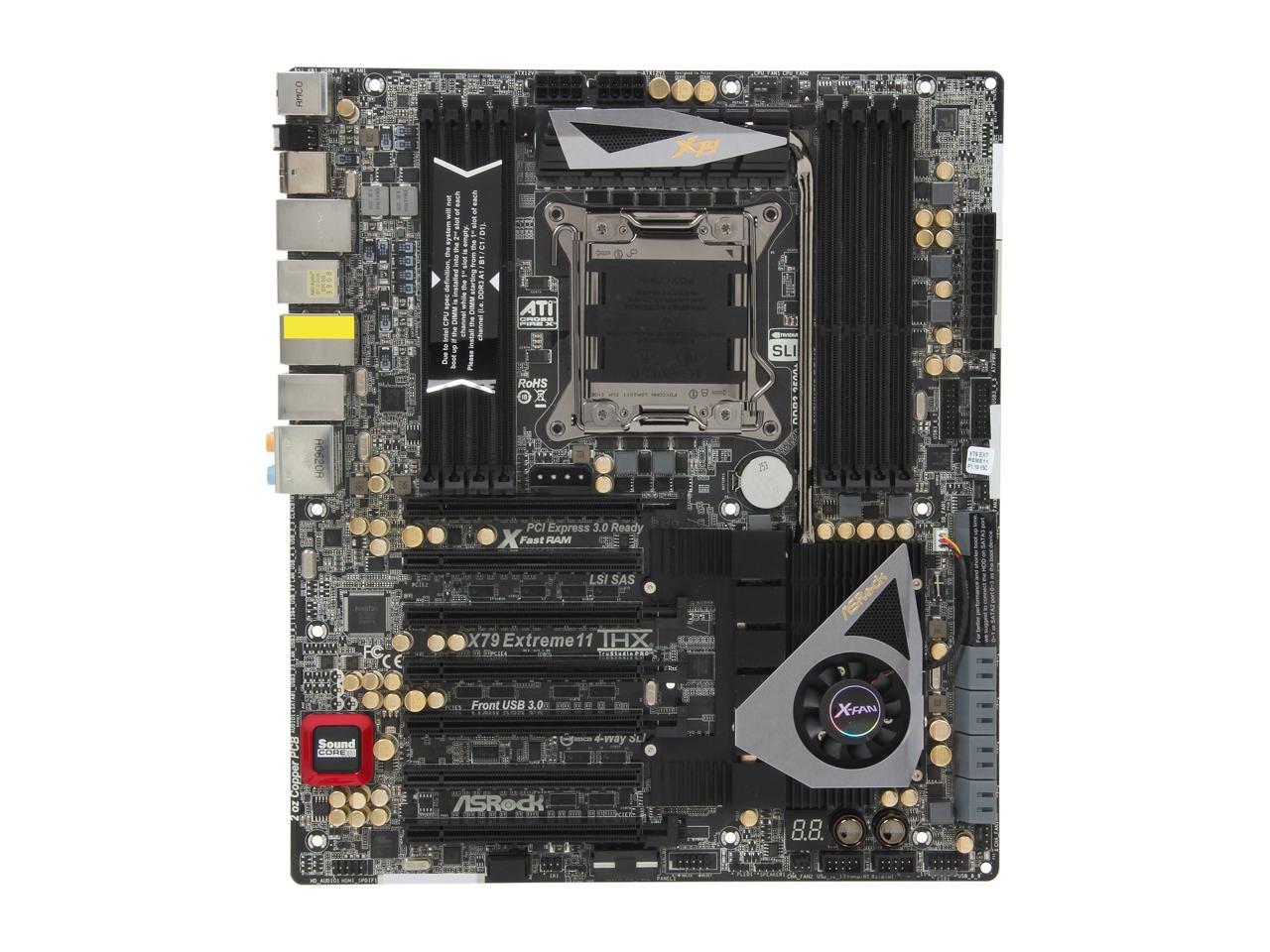 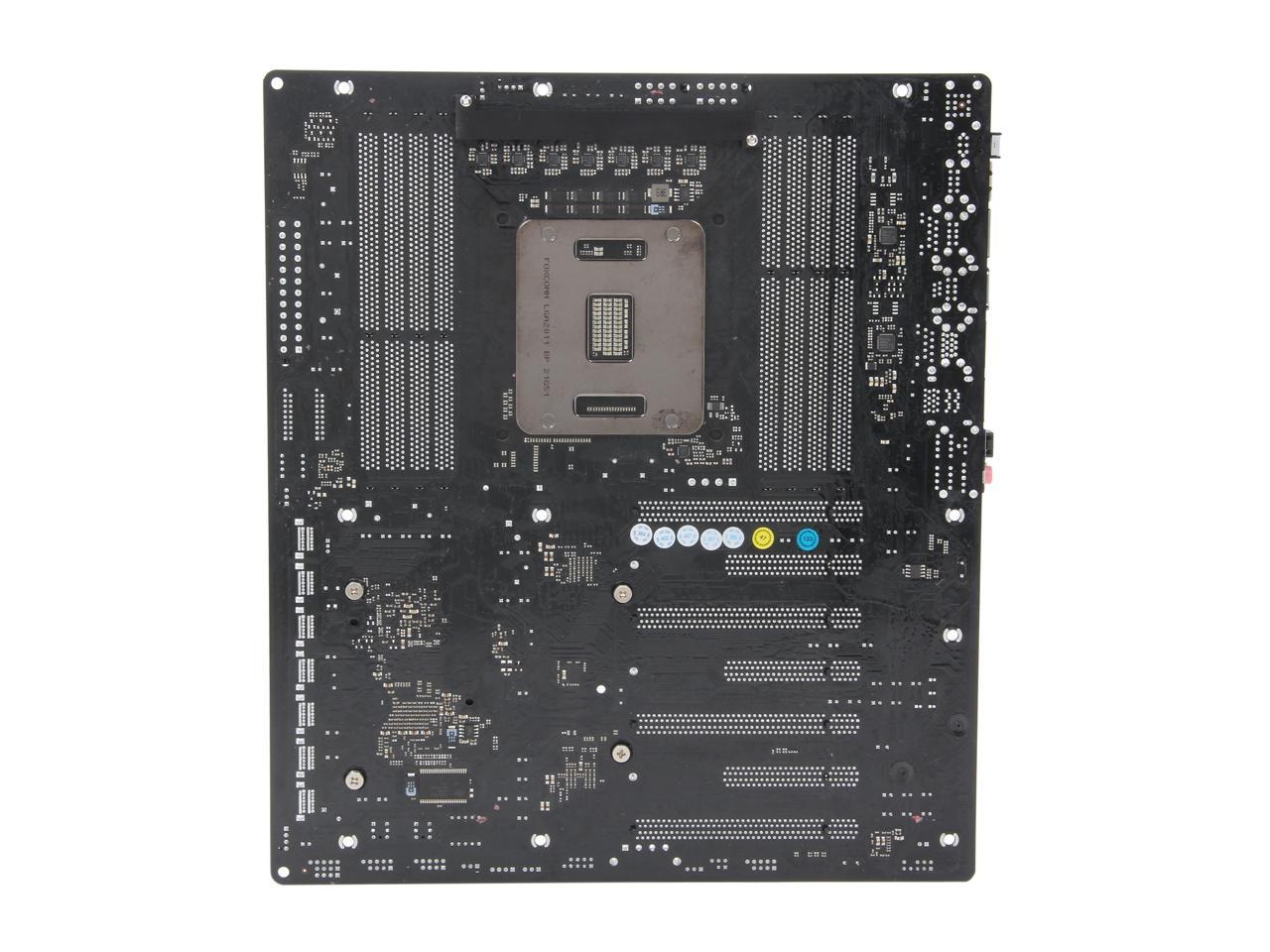 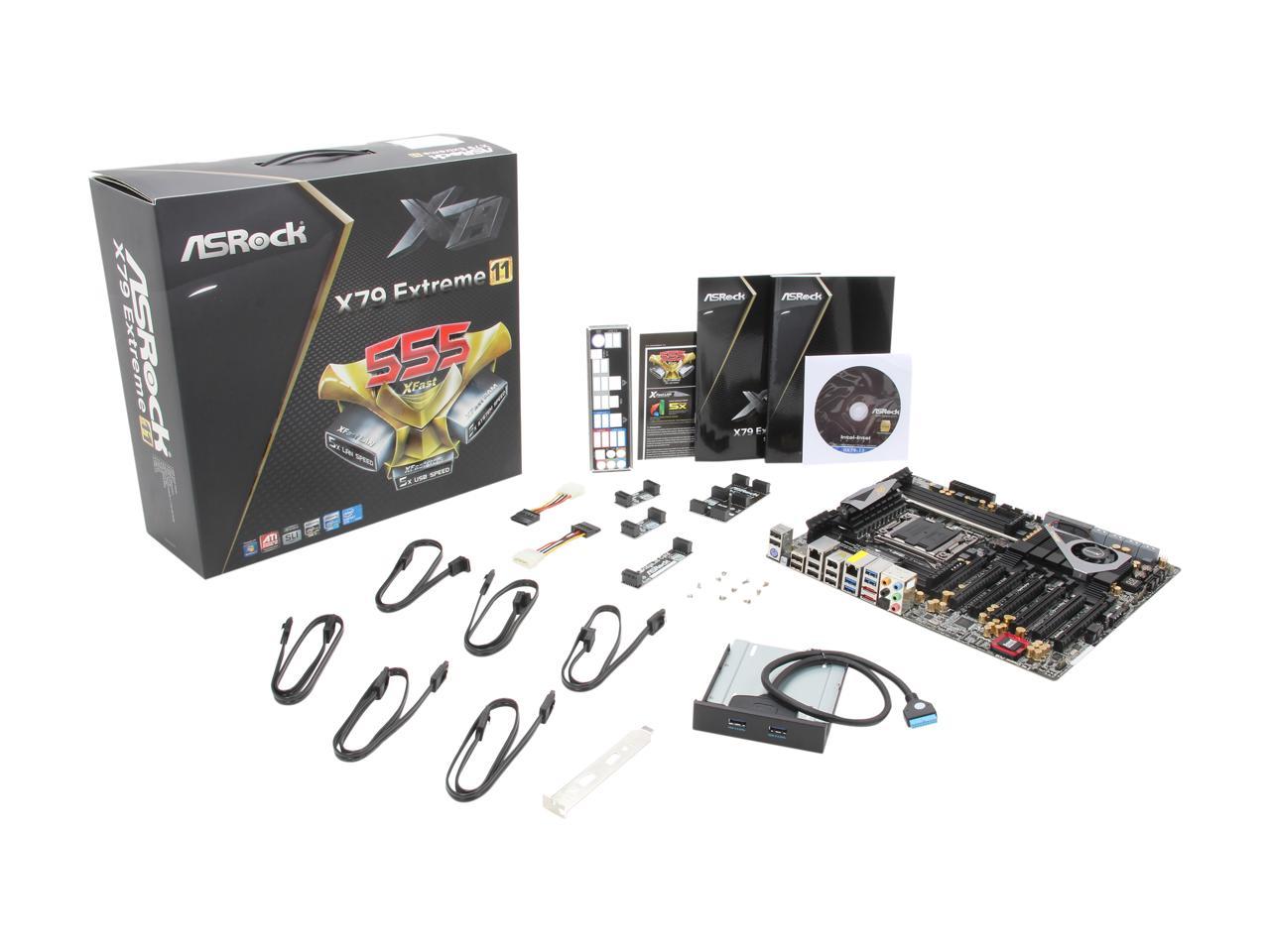 
A King-Sized Performer With Luxurious Components

The X79 Extreme11 is ASRock's top-end board for a top-spec desktop chipset. The brand new X79 Extreme11, like most of ASRock's latest boards aimed at the enthusiast end of the market, is full to the brim with features. PLX PEX 8747 bridges let this board to run multi-GPU 4-Way SLI/CrossFireX in full x16 PCIe 3.0 speed, 8 SATA3/SAS ports (sourced from LSI SAS2308 controller) support LSI MegaRAID, delivering 3.8 GB/s high transfer speed in RAID 0 mode, Creative Sound Core3D 7.1 CH HD Audio brings astonishing sound experience to user. This is a rare, superior motherboard that brings all luxurious components together, delivering the highest level of performance.

Pros: I've been dwelling on buying this motherboard for a long time. I have read many bad reviews with people complaining about bent cpu pins but after receiving this I suspect operator error. My cpu pins were all perfect. I put off buying this because of this fear. I am glad that my fear was unwarranted. My other concerns of course was the price of the board and the cpu I wanted. The board being $600 and the cpu $1069 that's a lot to spend on just two components. Well when I was able to buy a cpu for $475 I took the plunge on the board. Looking closely at the board you can see the quality and engineering that went into this board. Every inch of real estate was used and it all looks top notch. One of the main reasons I wanted this board was all the sata ports on it. Unfortunately the 8 LSI ports are complicated to setup for a hardware raid not what I was expecting. I don't have the patience to setup this kind of raid. The other raid chip is easy to setup. I ended up in the end using windows 7 software raid. Even in hardware raid mode the boot time was very short compared to add in raid cards. The bios has all kinds of setting and being able to use the mouse is great. I suggest before installing your os you play around and explore the bios. Overclocking is super easy but after some testing with Intel's burnin program I put it back to stock. I'll do more testing later but my best test result was at stock speeds. I only played with the cpu multiplier and never with the ram which I suspect was why stock cpu speed returned the best results. I also found windows 8 installs without any concerns but since I really don't like windows 8 I uninstalled it and did windows 7. Windows 7 has problems installing. It will install ok until you try to use the disk that came with the board. The first 2 times I just did the automatic install less the chrome install and it failed. The computer would hang on shut down. The third try I manually installed each driver and rebooted after each. After all the drivers were installed I did windows update and everything worked great. One of the other things that is different about this board is the ability to control the cpu and the fans from both bios and windows. I have water cooling and a very large case, Cosmos II, so fan control is important. At first boot the fans are full blast and very noisy. What I did was set all the fans in the bios to the lowest speed and then used the Asrock Overclocking program to better control speed and temp in windows. Pay close attention to the manual when installing ram. The ram needs to be split up for quad speed. With the tape covering 4 of the ports on the left side I made the mistake thinking I needed to put my 4 sticks on the right side, WRONG!! Check the manual. One of the cool features of the bios is the hardware info scanner. You roll your mouse over the picture of the board and it tells you what is installed there. Some are genetic and others are specific. Like my pcie OCZ SSD comes

Overall Review: This is obviously not your everyday motherboard but if you want the best buy this thing!

Bradley A.
Ownership: 1 day to 1 week

Pros: More SATA than most people will ever need. Everything works perfectly. Bios is an improvement over previous ASRock boards.

Cons: If using LSI SAS2308 to boot you will have a 20 second or so wait, but isn't that true if using the same raid card? A little pricey?

Overall Review: Finally have a board that can handle all my drives at the same time. Can do 4 way SLI/cross fire at PCIE3.0X16 This is my third ASRock board as of recent. I have become a true ASRocker. If you can afford this board get it. You won't regret it.

Cons: Only one is that the southbridge X fan is loud when it spins up...it's cooling 4 chips.

Overall Review: I wanted to offer a useful review so I waited until I had the board running for a few months in daily use. This is my first hands on with an ASRock board. The board booted up right from the start with absolutely no issues. I'm running indows 8 Pro and I've run the board with both a 3930K and a 3970X. I kept the 3930K in the rig for now. Memory is 32 gigs GSkill 2133 over clocked. I've run multiple graphics cards, GTX 670 FTW's, single cards, high end Juli audiophile card, Asus wireless network card and multiple drive configs. I updated all the drivers but I've never bothered updating the bios at all. I'm running a light overclock at 4.4ghz with 1.27v and I can run Prime 95 small fft's for over 24 hours without a glitch. I've pushed the 3930K and 3970X both to a 4.85+ghz clock with ease at 1.42 v perfectly stable and the board can probably take it higher if I feel like it. The only con that I've had was the fan noise from the chip set block gets annoying and it seemed to always spin up regardless of the settings. The board is now water cooled with a MIPS nickel/ delrin water block set and I'm using an Apogee HD gold cpu block in a custom multi rad loop with separate GPU loop in Case Labs TH-10 case. The only addition that I plan to do soon, is to add 4 WD red drives or WD4 enterprise drives in a SAS array. All I can say is that I haven't had one single problem with this motherboard since the day I booted it up and loaded the drivers and Windows 8. I've benched it, overclocked it, water cooled it in numerous configurations, RAID arrayed it and it's sitting right here in my home office being quite and waiting for me to give it more to do. A very impressive motherboard and a beautiful office computer.

Pros: Overwhelming Expandability A lot of BIOS options Color scheme (important for some) Overclocks Well (regardless of what others say) SB fan is temperature controlled, can easily be turned off 2x PLX chips for all of the PCI express lanes LSI raid chip for 8x SATA3/SAS connetions 24+2 Power Delivery Many more....

Cons: Expensive, but I can't complain LOUD BIOS, can disable but can be annoying. Not to many PWM fan headers Not Intel Lan

Overall Review: This board is amazing. I was skeptical of buying ASRock at first but I am VERY happy with this perchase. I have my 3930k at 4.6GHz @ 1.36 volts, which is about what I see from my friends with the R4E. This board has more expansion than any normal user could imagine using but this board is NOT for a normal user. If you don't have deep pockets or this is not for a Extreme machine turn back now. Otherwise this is the perfect board for being "That guy" :D

Pros: Great board easy to overclock fast as heck, stylish color scheme tons of ports for almost anything you could want to add to a motherboard

Cons: Kinda heavy and quality seems to be hit or miss, kinda loud south bridge fan i'm not a silence freak so it doesn't bother me but if you want a silent pc this will be a problem (louder than the corsair fans that came with my C70 ALL 3 of them combine when it is a full throttle) and pcie locking tabs can be annoying when removing video cards (tend to slide back into a semilocked pisition)

Overall Review: Got a doa board but thanks to Newegg's excellent customer service I was up and running in 1 week total include the shipping to them and back great experience out if a potential disaster

Pros: When rendering video this board rocks. This board likes to work for a living. I've never had a problem with this board while under a load.

Cons: This board has a tendency to freeze when running low power programs like Word and Firefox. It's extremely frustrating. I've done research on the problem but have had no success in fixing it, and from the tech questions I'm seeing online about this same problem this is not an isolated problem.

Manufacturer Response:
Dear ASRock Customer We sincerely apologize that you having difficulty with mainboard. Please download and update the latest BIOS at link " http://www.asrock.com/mb/Intel/X79%20Extreme11/?cat=Download&os=BIOS " . Set the UEFI BIOS default. Test with single memory module. Check the CPU and system are not overheating. If you have any technical issues or warranty questions please contact our Tech Support at http://www.ASRock.com/support/tsd.asp. We can assist you shortly. Thank you ASRock SUPPORT Tech Support Email: user@ASRockamerica.com
Anne D.
Ownership: less than 1 day
Verified Owner
Hmmmm........4/23/2013 10:47:46 AM

Pros: Has everything I ever wanted in a motherboard.

Cons: No phone support really ASRock! What does your father (Asus) think about that Hmmm? There are far to many boards being refused warranty due to bent pins for it not to be a little suspect! I suspect that in addition to some customers bending pins that there is a quality control issue at the factory as well.

Overall Review: I really wanted this board to be the foundation of my next PC. The last PC I built cost over $7,000 in total so, a high priced board is not in itself a turn off as long as it has what I need and this board has it all. But even brand new boards can have issues (my last one did) and good phone support is essential for quality customer service. You would think a $600 motherboard would have that! Not only does this high end board come with low end support but, to many people are reporting the warranty killing bent CPU socket pin problem for me not to at least suspect that it isn't just a handling issue on the customer side. Until you (ASRock) grow up and learn to have a little respect for the ones that feed you (your customers) I'll stick with your father (Asus) To bad, this motherboard had the potential to be the best motherboard I ever owned.

Manufacturer Response:
Dear ASRock Customer We sincerely apologize for any inconvenience this may have caused you. The CPU socket pins on the mainboard are fragile and need to be handling with carefully. In addition, the CPU socket is covered with the cap to avoid damage the pins and should not be removed until installing a CPU. Damaging socket pins should considered as physical damage, please refers to RMA policy at " http://www.asrock.com/support/index.asp?cat=Policy ". As always, we appreciate your purchase and constructive reviews are welcome. If you have any technical questions or warranty issues please contact our Tech Support at 909-590-8308 or http://www.ASRock.com/support/tsd.asp. We can assist you shortly. Thank you ASRock SUPPORT Tech Support Email: user@ASRockamerica.com
Dennis J.
Ownership: 1 month to 1 year
Verified Owner
1/28/2013 5:20:36 AM