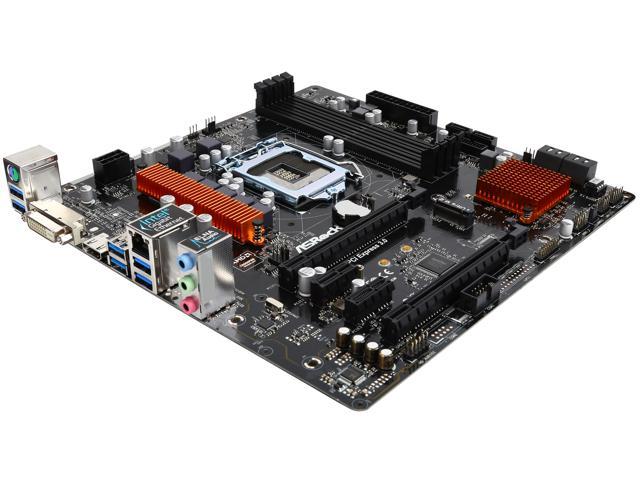 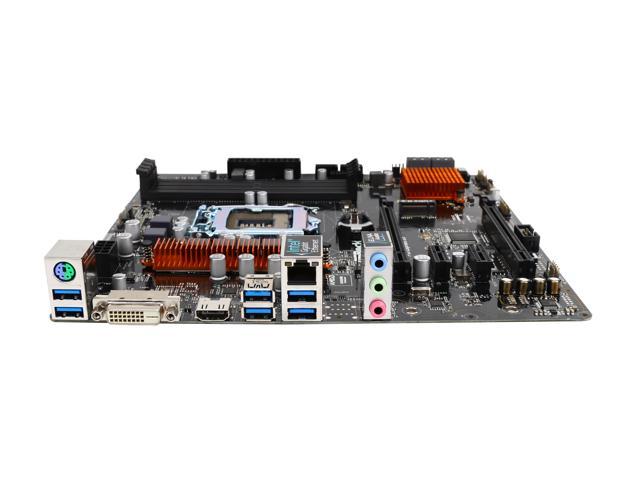 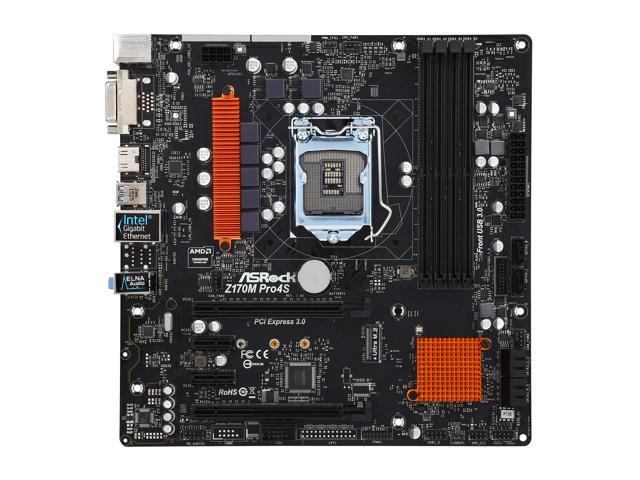 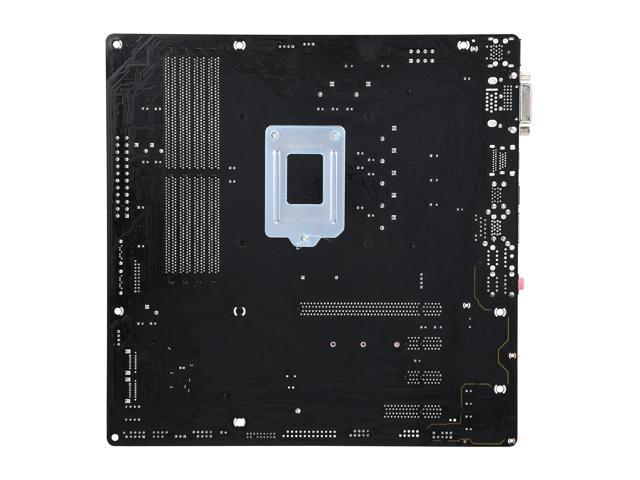 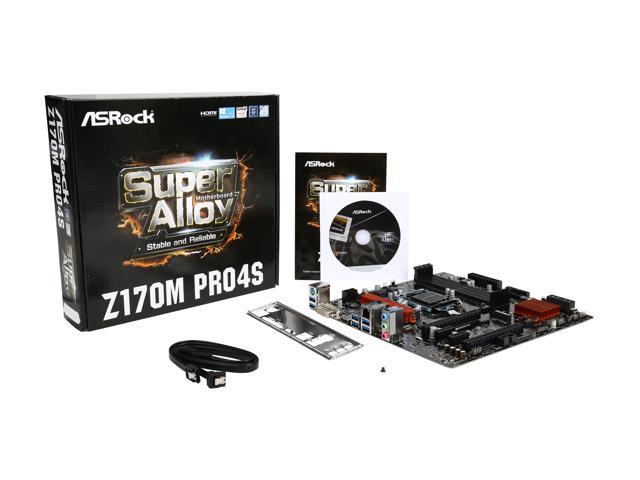 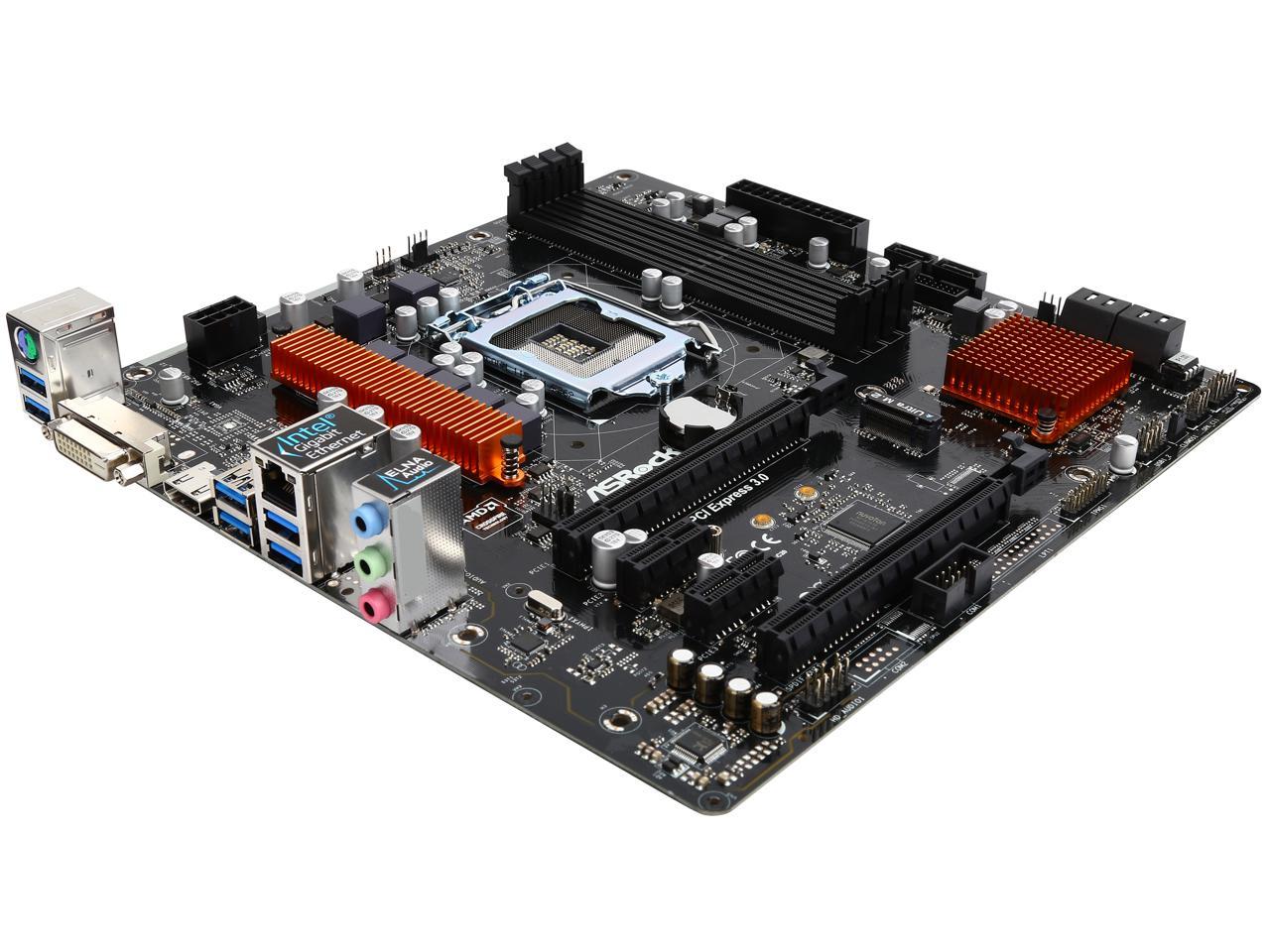 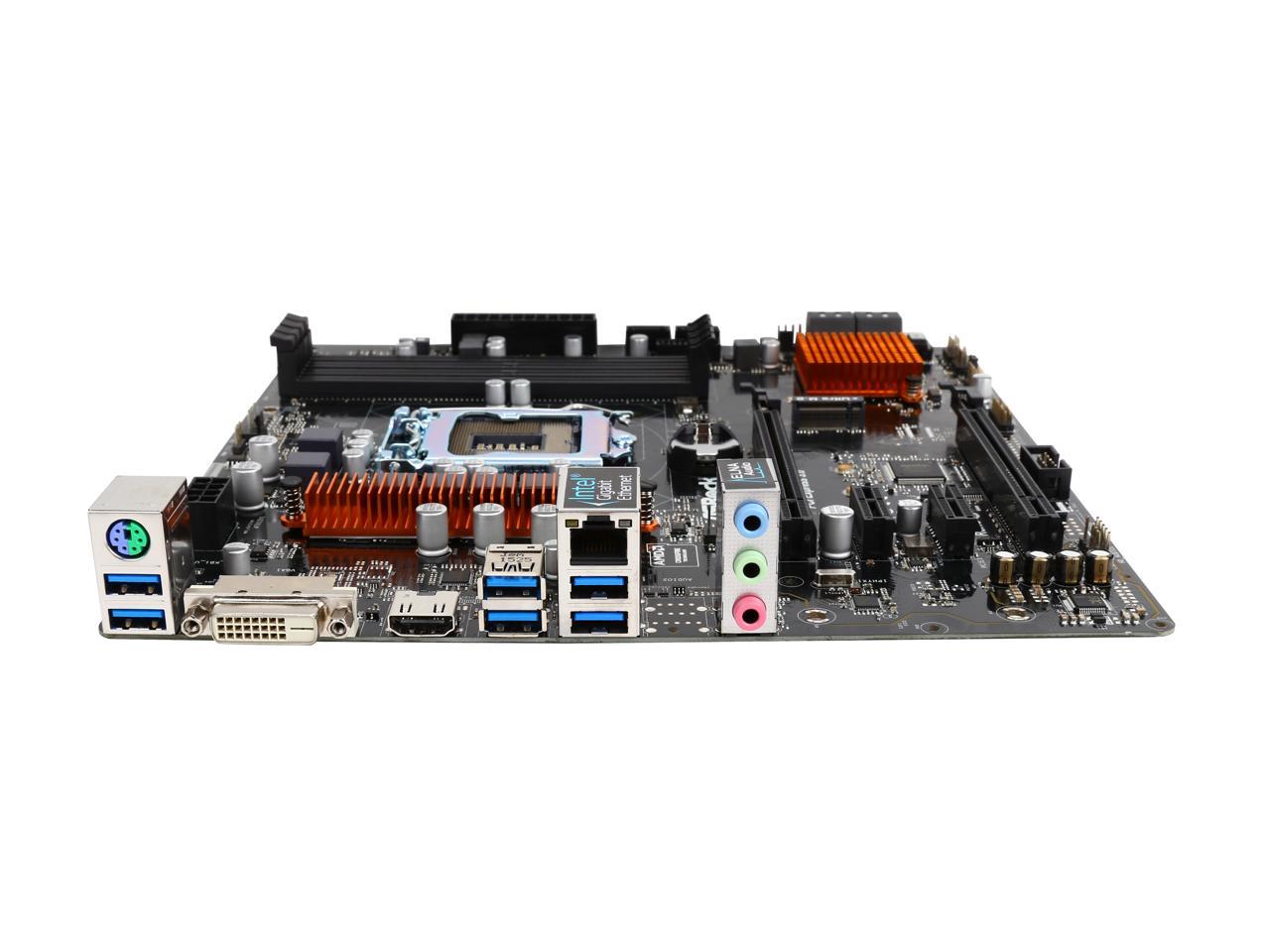 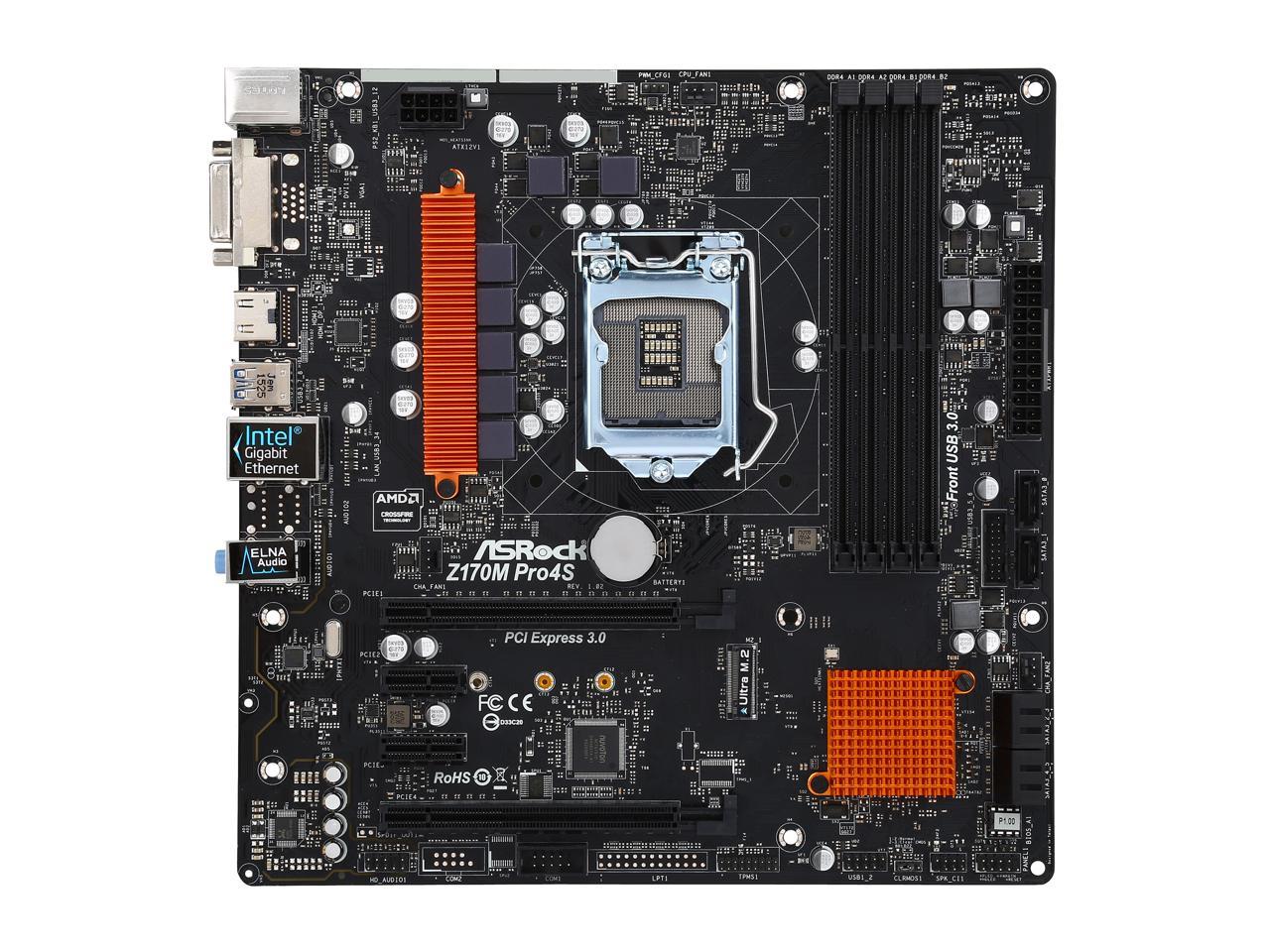 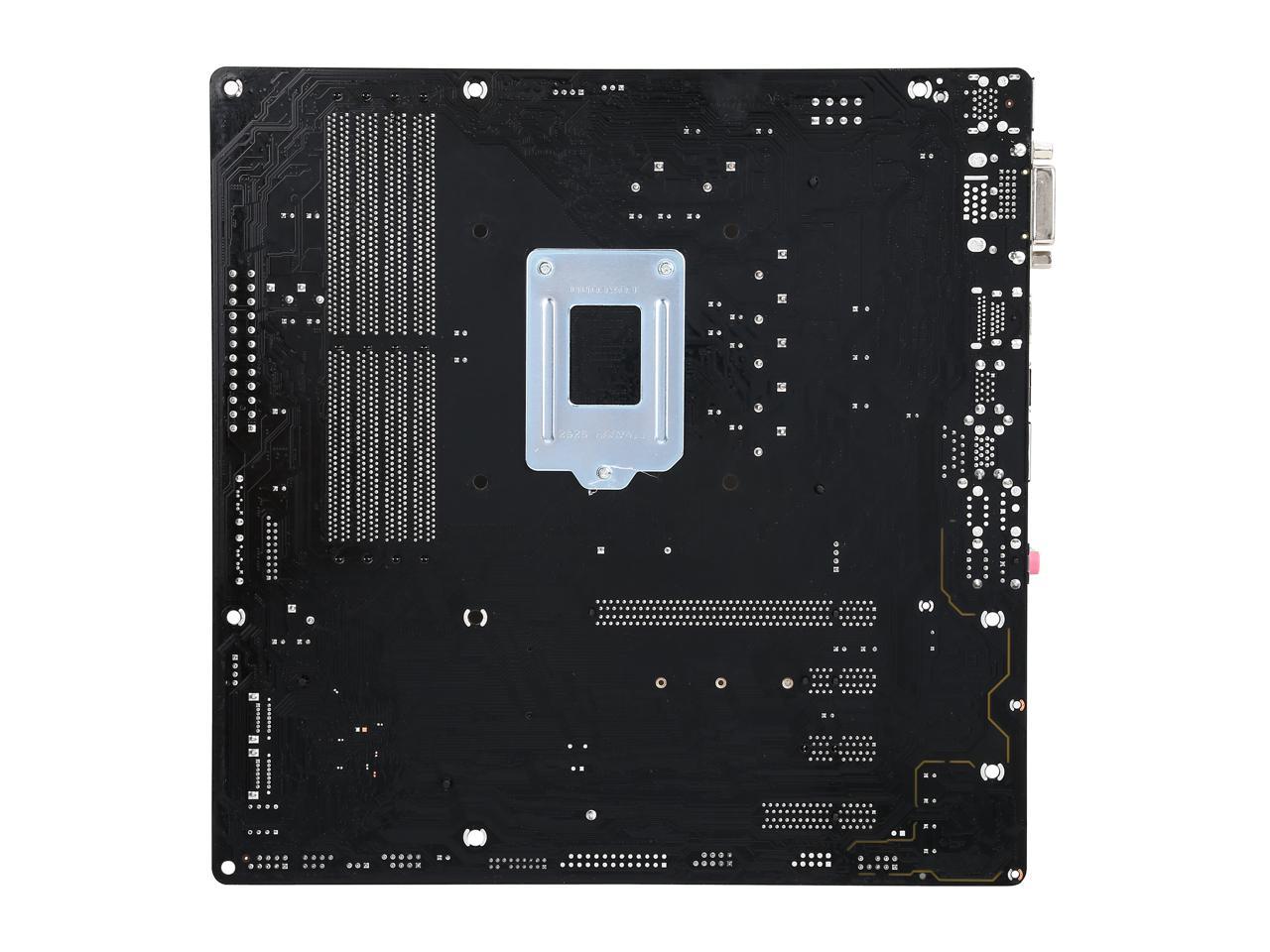 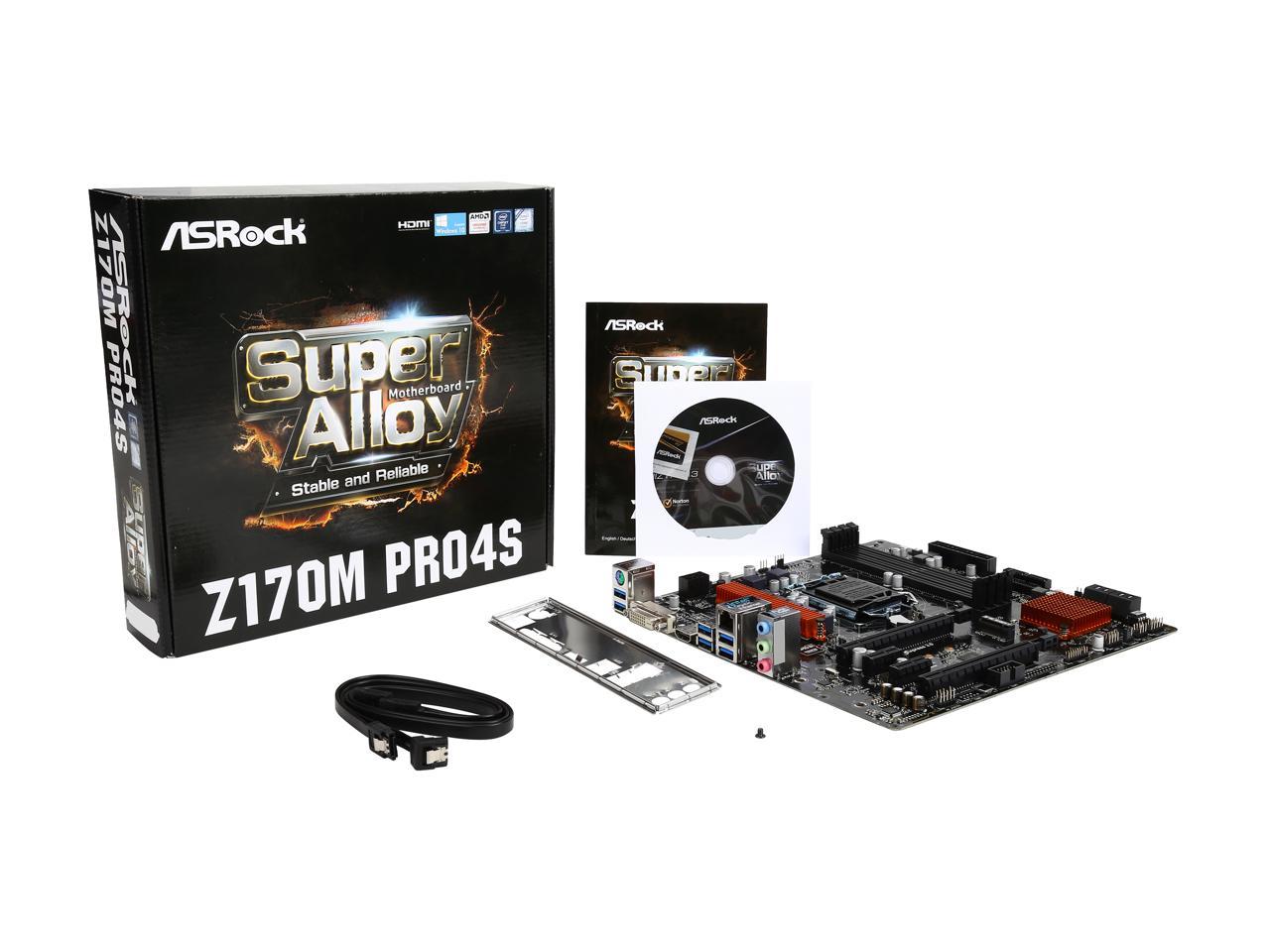 The ASRock Z170M Pro4S is built in mATX form factor with the finest components, and provides the industry's highest level of features and technologies. It offers you more than enough for an exceptional experience in every aspect.

What you've never understood about your computer is that it is scared to death of water, H2O, humidity or whatever you'd like to name it. And even though you do not see the water, actually there may be lots of excessive moist in the air killing your motherboard silently and slowly. No, your motherboard doesn't melt when in contact with water like the wicked witch of the west, but it dies of short circuit. Luckily, ASRock has a new High Density Glass Fabric PCB design that reduces the gaps between the PCB layers to protect the motherboard against electrical shorts caused by humidity. The PCIe Gen3 x4 Ultra M.2 interface pushes data transfer speeds up to 32Gbps. In addition, it also supports SATA3 6Gbps M.2 modules, and is compatible with ASRock’s U.2 Kit for installing some of the world’s fastest U.2 PCIe Gen3 x4 SSDs. Originally an Easter egg, now the hidden option DDR4 OC may be summoned from the UEFI using certain memory modules, such as Samsung or Kingston DDR4 memory DIMMs. It unlocks the hidden potential of those memory modules and maximizes the performance! This motherboard supports the latest DDR4 memory modules and most extreme memory performance. A new flexible PCIe Gen3 x1 slot design that allows users to install add-on cards of all kinds of sizes.

* The bandwidth of your devices will be limited to PCIe Gen3 x1.

EZ mode is a dashboard which contains multiple readings of the system's current status. You can check the most crucial information of your system, such as CPU speed, DRAM frequency, SATA information, fan speed, etc. Due to chipset limitation, when you want to install Windows 7 on this MB, you may need to use "Win 7 USB Patcher" to create a new ISO file. ASRock XFast RAM fully utilizes the memory space that cannot be used under Windows 32-bit operating systems. It shortens the loading time of previously visited websites, making web surfing faster than ever. And it also boosts the speed of Adobe Photoshop 5 times faster. Another advantage of ASRock XFast RAM is that it reduces the frequency of accessing your SSDs or HDDs in order to extend their lifespan.

This motherboard supports HDMI (High-Definition Multimedia Interface) which is an interface standard for transferring uncompressed video data and delivering multi-channel audio through a single cable. Both video and audio data signals transferred through the HDMI interface are digital without being converted into analog, therefore it delivers the richest pictures and the most realistic sounds.

Pros: Great board with lots of features. Needed BIOS update for any kind of overclocking. I have 10 of them for a small cluster, none were defective in any way.

Pros: I am using this with a 6700K, 32GB Ram, Samsung 950 Pro M.2 and I have a large RAID 5. Initially I had some bugs with booting off m.2 And Intel's RST not thinking my raid was compatible, but it was still all working with great support we got it working and with the last bios update of 2.4 all is working now. I love the small form factor. With Asus is having _so_ _many_ _troubles_ with skylake and new bios updates almost bi-weekly, I avoided them. Happy with Asrock.

Cons: Nothing. Lacks USB 3.1? I don't have any devices anyways.

Overall Review: As of Bios 2.4 (Jan 25th 2016) there are no problems with m.2 and RAID. Do not hesitate to get this board, all the Skylake Bleeding edge bugs have been worked out. As long as you don't need more than 2 way SLI/CF, and 1 M.2 + 4 SATA devices, this is a high end board with every feature you could ever want. I can't comment on how well it overclocks, but overclocking requires a lot of expensive cooling that gives you maybe 1-5 more FPS, so it's not really worth voiding all your warranties. The gamble is just not cost effective, just buy a more expensive videocard or cpu that will give you more performance per dollar than buying hardware to support overclocking.

Pros: Easy setup. M.2 is on top of motherboard not underneath like some. Fast as hell with UEFI and Samsung Pro 950. Boots cold to Windows 10 in 8 seconds flat. I'm not aggressively overclocking but bumped i7-6700U to 4.4 GHz with ease. Memory overclocked to 3000 MHz. All easy to configure.

Cons: No Bluetooth or AC wireless but I don't need that.

Overall Review: 100% recommend if you don't need Bluetooth or wireless without expansion card.

Pros: - Very excellent simple motherboard. Has decent features for the price (M.2, Crossfire support, overclocking features, great build quality). - The UEFI is fantastic. I used the built in PS/2 emulation to install Windows 7 without any issues. Super helpful and very intuitive. - I like the way it looks. I know some people like the aesthetic of higher tier gaming motherboards, but I think this one looks great.

Cons: - Not a huge fan of the RAM mounting system. Clips only on one side, which makes removing sticks a little dodgy. Just remember to be very careful! - Placement of the second chassis fan connector is directly underneath my GPU. Made installing the GPU feel like I was going to maybe damage the pins or something, but in the end I think there's JUST enough room that you can have that fan connected and install a large graphics card.

Overall Review: If you're looking for a decent Skylake board that's affordable, overclockable, and fits in a Micro package, you've just found it. The two cons I listed didn't actually interfere with my ability to complete the build, so I didn't remove any eggs for them. They're just something to be aware of when working with this board. I love it!

Pros: The reviewers that said that couldn't overclock either didn't download the new bios or it wasn't out when they got the board. I overclocked to 4.3 GHz with the multiplier and upped the GT (graphics) by another 100 MHz. I found a really detailed analysis online by someone that, by trial and error, determined for every 100 MHz you over clock up to 4.5 you need to add another 32 millivolts. I was able to get a stable clock at about +84 millivolts without the graphics overclock. with the graphics overclock I had to raise it up to +96. So racing my system I get a total of 1.200 volts to the core. Make sure you use the offset for your millivolts though so you system can still be throttled. I'm using an air cooler with heat pipes and aluminum fins, arctic silver 5 and the highest temp I've seen with a stress test of the CPU and GPU simultaneously is 54 C.

Cons: This is a media server which required Windows 7 for media center TV. You need to download their utility for adding the USB drivers during install because it doesn't support win 7 natively. If you have windows 7 ISO with "debug" in the name, do not use that with their tool. I ended up having to use a plain Win 7 disk without SP1.

Pros: Inexpensive for a z170 chipset board. Looks good and runs cool Helpful how-to to install win 7 on it if you need it on their website and support cd Just works

Cons: Some bloatware on support cd so be careful to install just what you need. No USB 3.1 but I didn't need it anyway. That is pretty much all.

Overall Review: Asrock boards have some of the best price/performance ratios of all boards on the market imo.

Cons: Personal Preferences: DVI-D could've been a DVI- I SATA 1 & 2 connections were upside-down in my literal case

Overall Review: Overall a great board for a great price. Would buy it again even with its "flaws"

Pros: Affordable mobo for the new 1151 socket intel CPUs Has an ultra fast boot feature (as long as your drive is formatted as GPT) Easy to overclock your CPU (make sure you update the UEFI first) Has pretty much everything you need all in a micro-atx package

Cons: The DIMM slots only have 1 push extractor on one side of each slot. This is a terrible design. When you push it down to unseat some RAM, the DIMM will rise on an angle, straining the slots pins and making it nearly impossible to remove without damaging the other non-pushable end of the DIMM slot. I ended up breaking off part of the end of the slot while trying to pry some RAM out of it. A USB 3.1 port would be nice.

Overall Review: Overall good, but be very careful if you ever have to remove RAM from this board.