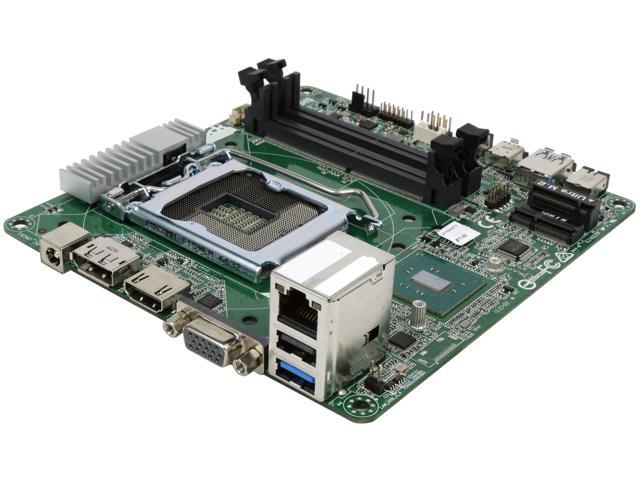 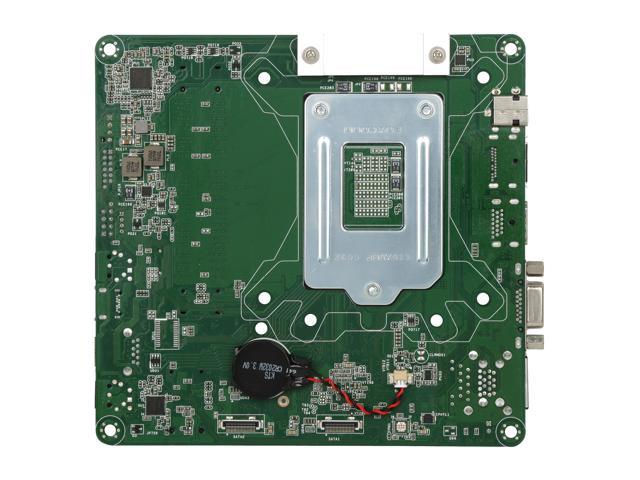 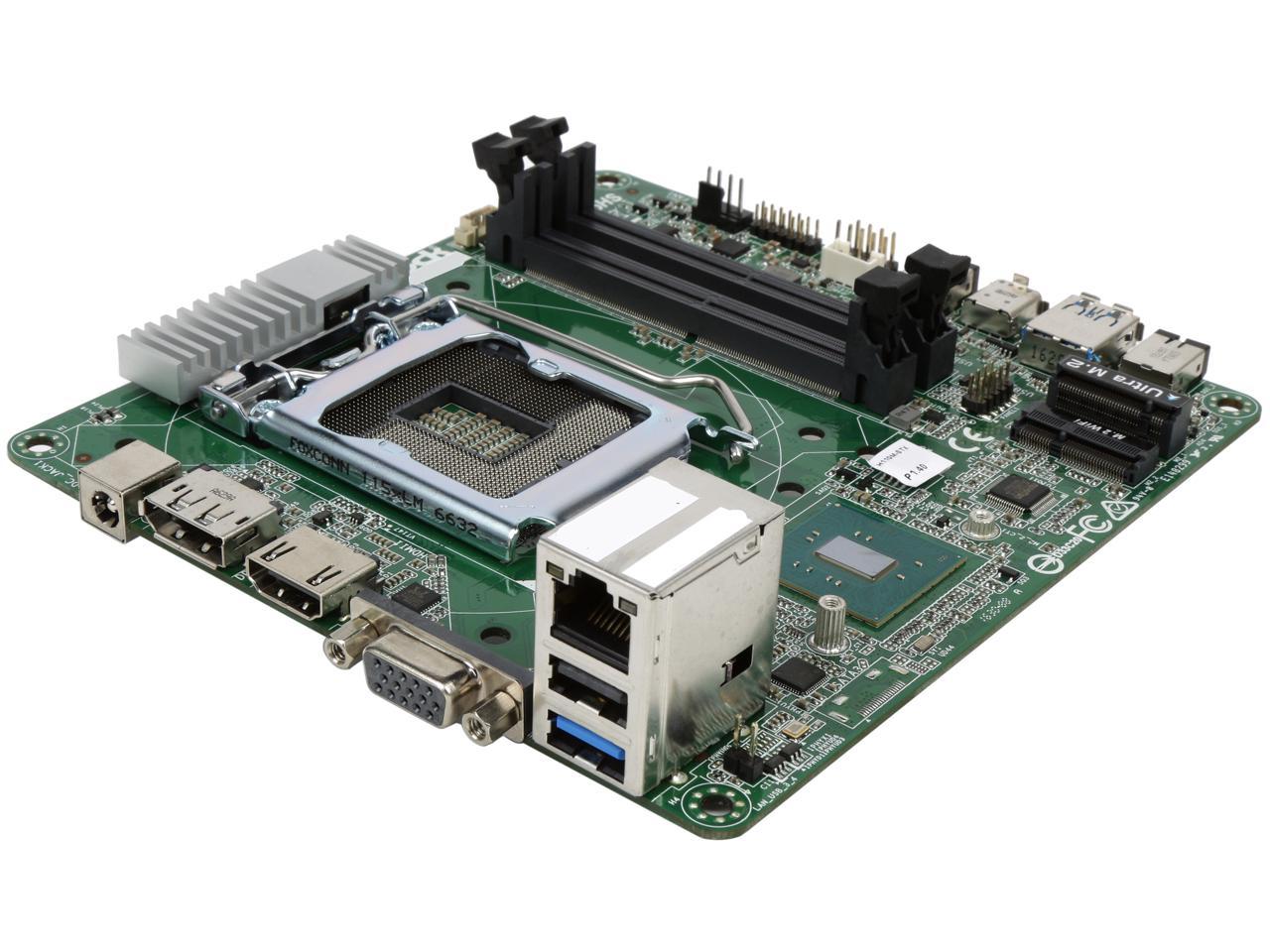 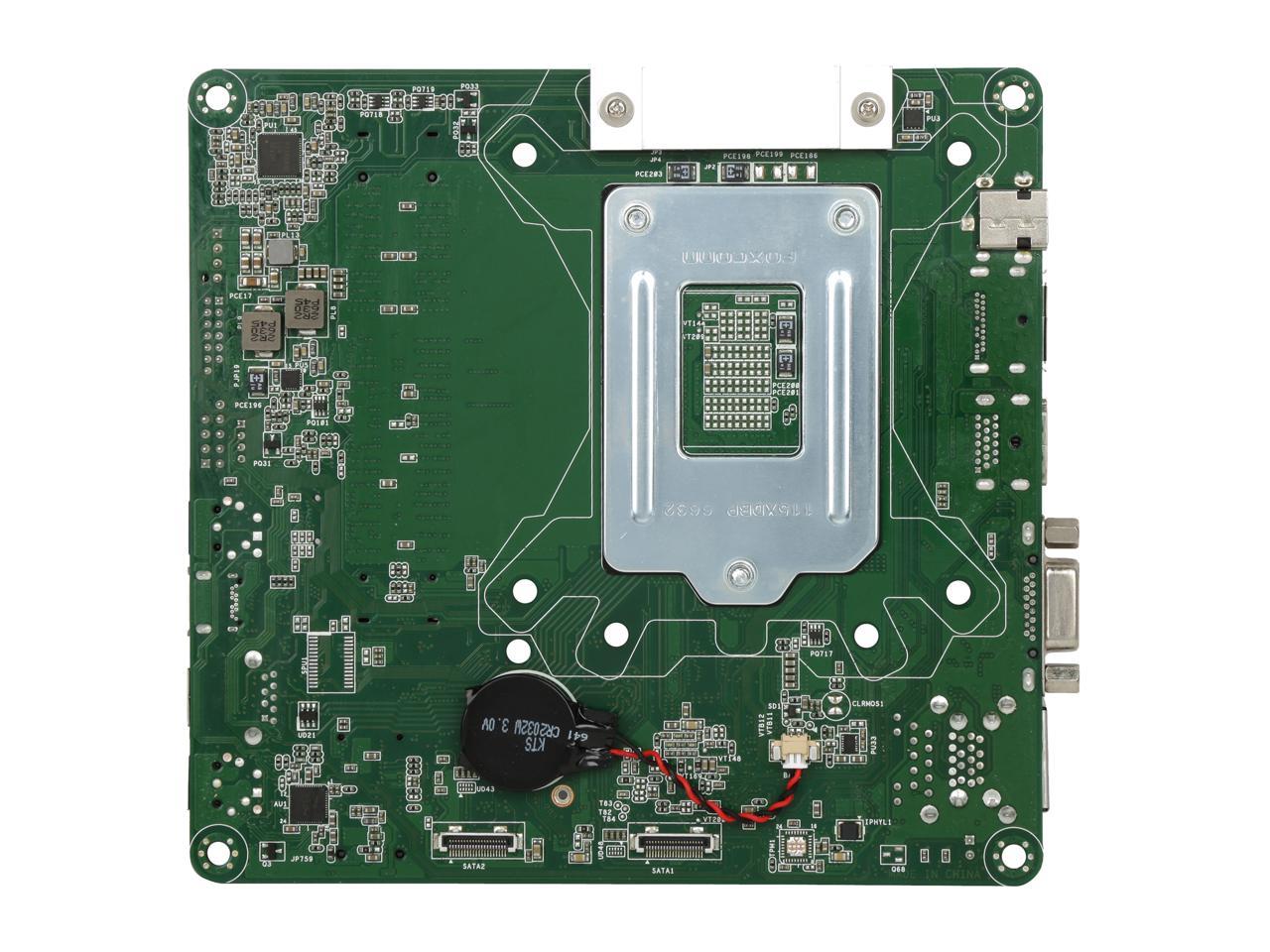 There are two SATA3 headers on the opposite side of the motherboard, which supports 2.5" HDDs/SSDs.

This motherboard supports all three kinds of graphics D-Sub, HDMI and DP.
* Supports up to 2 displays simultaneously

A Type-C USB 3.0 connector for fast charging and delivering up to 5Gbps data transfer rates. A reversible design that ts the connector either way.

An M.2 slot for supporting a Wi-Fi + BT module, and a second one for supporting PCIe Gen3 x4 M.2 SSDs which is directly powered by the CPU, thus boasting 7% better performance. * SATA type M.2 module is not supported.

Compatible with 19V power adapters. This unique design allows this motherboard to t in compact chassis and saves more power consumption.
* It is recommended to use 120W power adaptor. 90W power adapter only supports CPU with a maximum of 51W TDP. For users that don't have an optical disk drive to install the drivers from our support CD, Easy Driver Installer is a handy tool in the UEFI that installs the LAN driver to your system via an USB storage device, then downloads and installs the other required drivers automatically through the internet. Completely no CD or optical disk drive required!

ASRock XFast RAM fully utilizes the memory space that cannot be used under Windows® 32-bit operating systems. It shortens the loading time of previously visited websites, making web surfing faster than ever. And it also boosts the speed of Adobe Photoshop 5 times faster. Another advantage of ASRock XFast RAM is that it reduces the frequency of accessing your SSDs or HDDs in order to extend their lifespan. This motherboard supports HDMI™ (High-Definition Multimedia Interface) which is an interface standard for transferring uncompressed video data and delivering multi-channel audio through a single cable. Both video and audio data signals transferred through the HDMI™ interface are digital without being converted into analog, therefore it delivers the richest pictures and the most realistic sounds.

Learn more about the ASRock H110M-STX

Cons: So far none.

Pros: I replaced it with an ASUS motherboard.

Cons: It completely stopped working (wouldn't even post) about three weeks after I got my machine setup. Wow.

Overall Review: In 2016 I bought a ASRock X99 Extreme4 for my new build... it went bad a year later (it behaved strangely ever since I bought it). Shame on you ASRock. I accidentally bought this motherboard and forgot to check the brand. When it arrived I noticed that it was an ASRock motherboard. Being the lazy person I am I decided to give you guys a second chance. It went dead. So shame on me.

Manufacturer Response:
Dear Valued ASRock Customer, Sorry to hear that the mainboard is malfunctioned. We will be more than happy to replace the mainboard if it’s malfunctioned. Please try following Reinstall the CPU and cooler. Test with single memory module, switching another memory if problem still persist. If you have any technical or warranty inquiry, please contact us at http://www.ASRock.com/Support/tsd.asp We will assist you shortly. Thank you ASRock Support Tech Support Email: http://www.ASRock.com/Support/tsd.asp