Feel 100% satisfied with your purchase -- with no restocking fees & no return shipping costs* within 30 days of delivery. Learn More
Price Alert
Add To ListFound on 18 wish lists 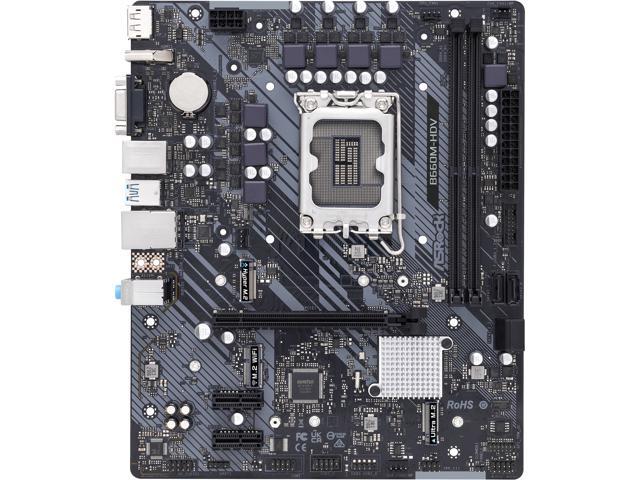 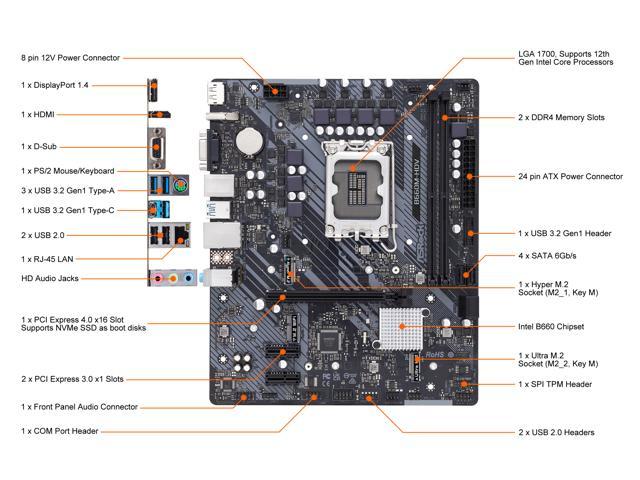 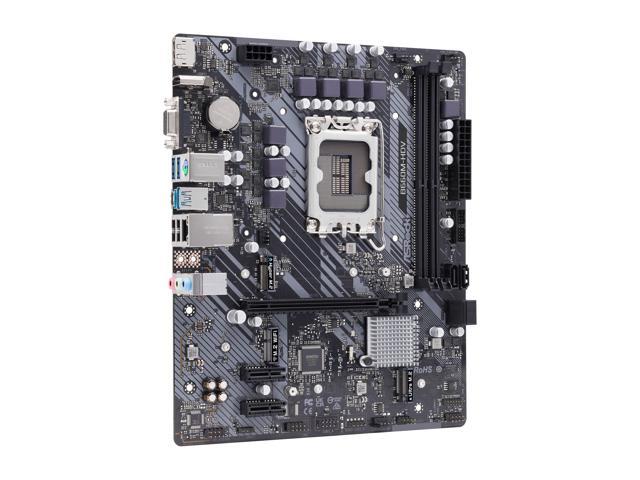 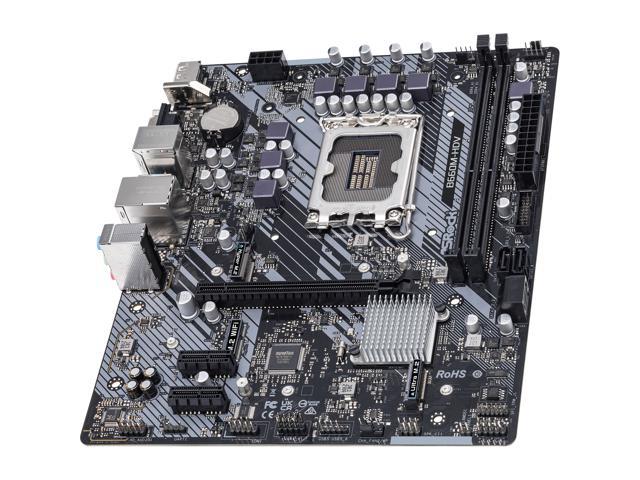 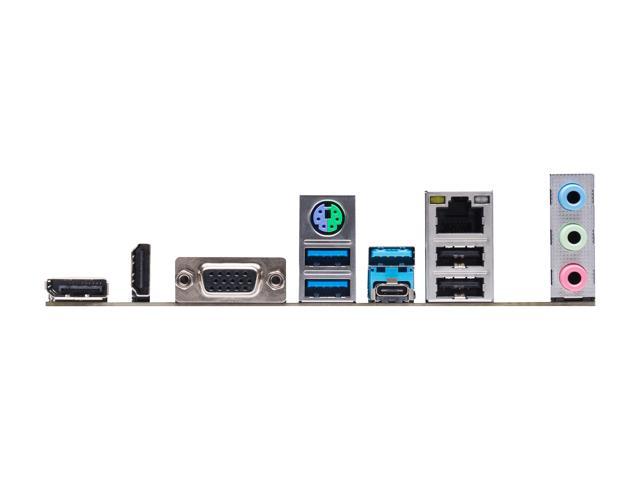 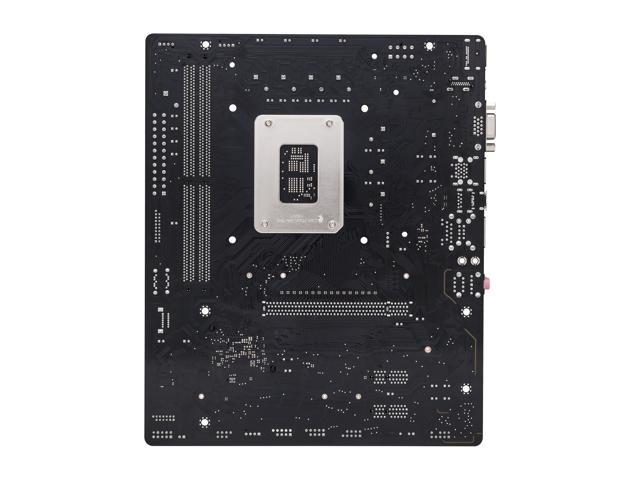 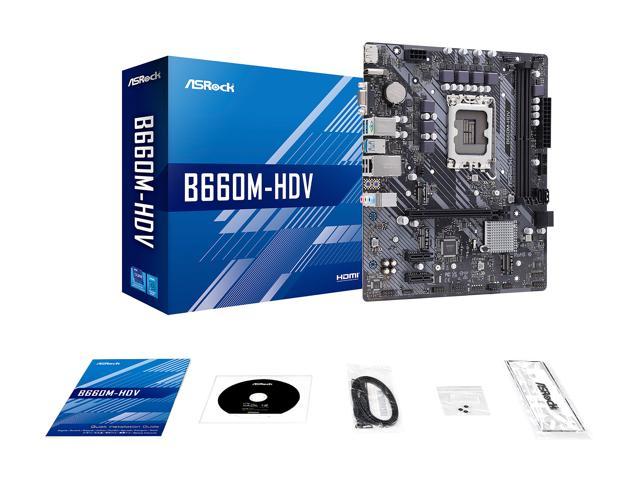 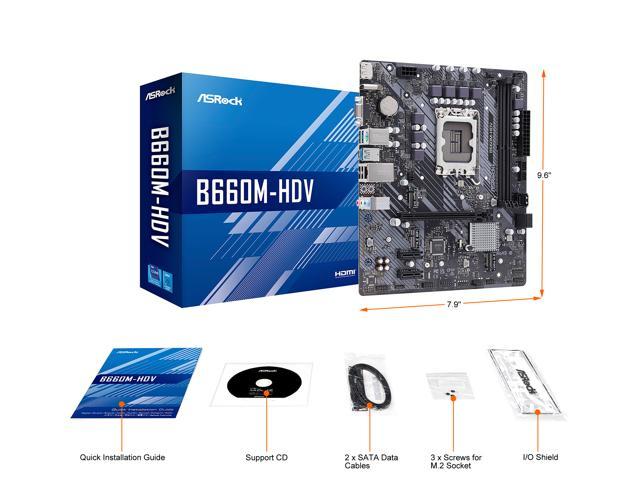 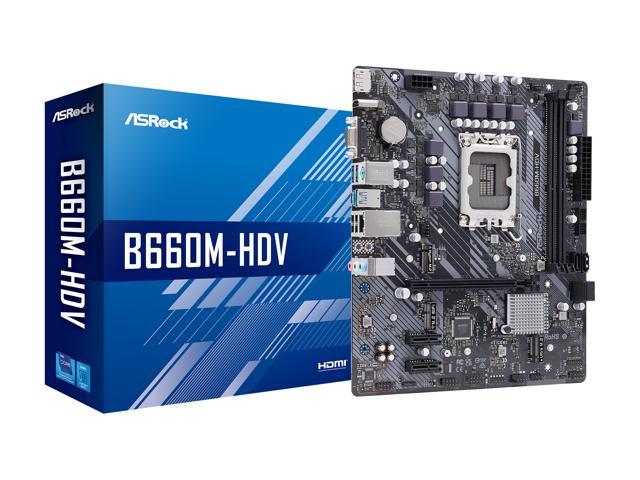 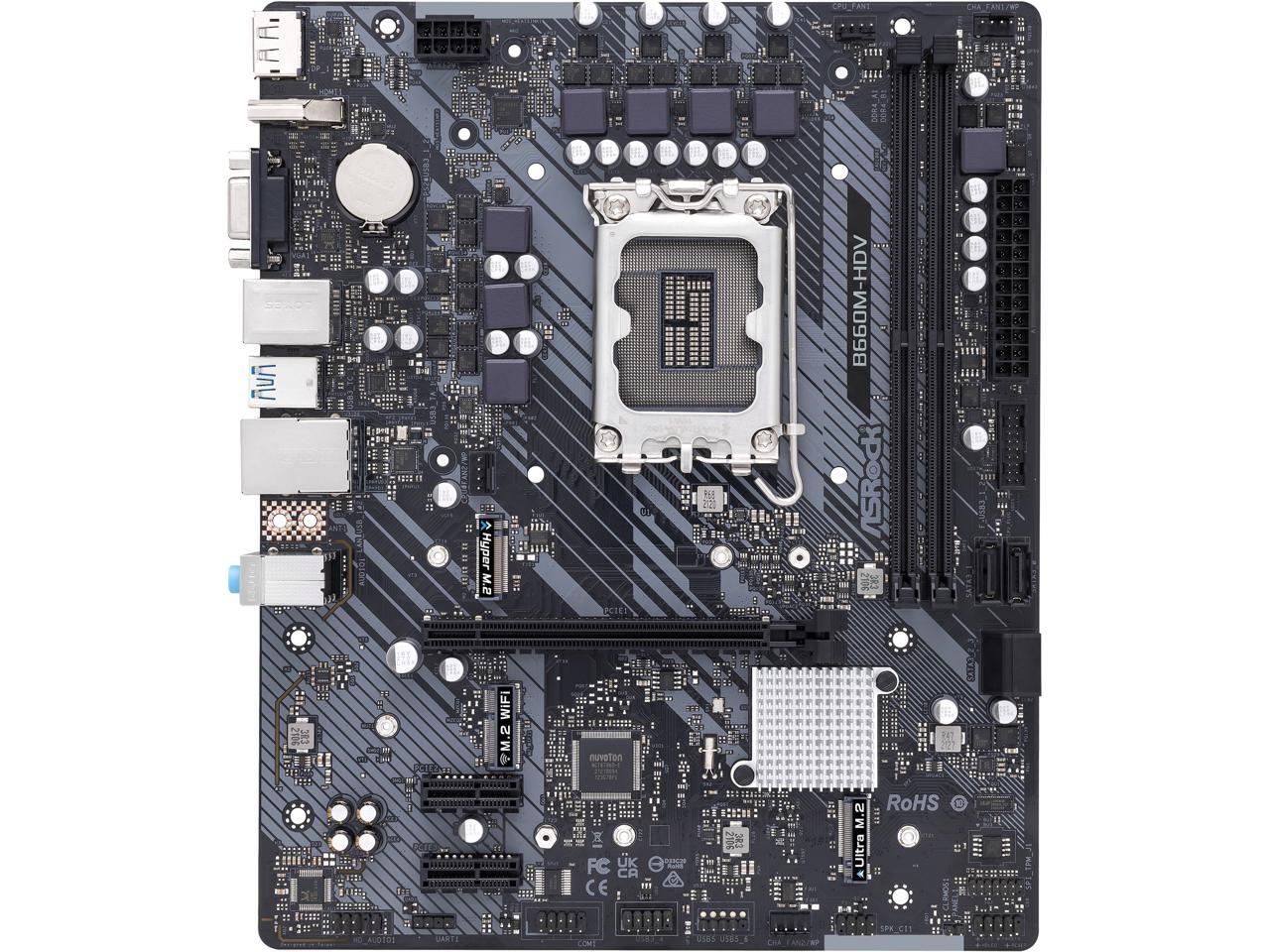 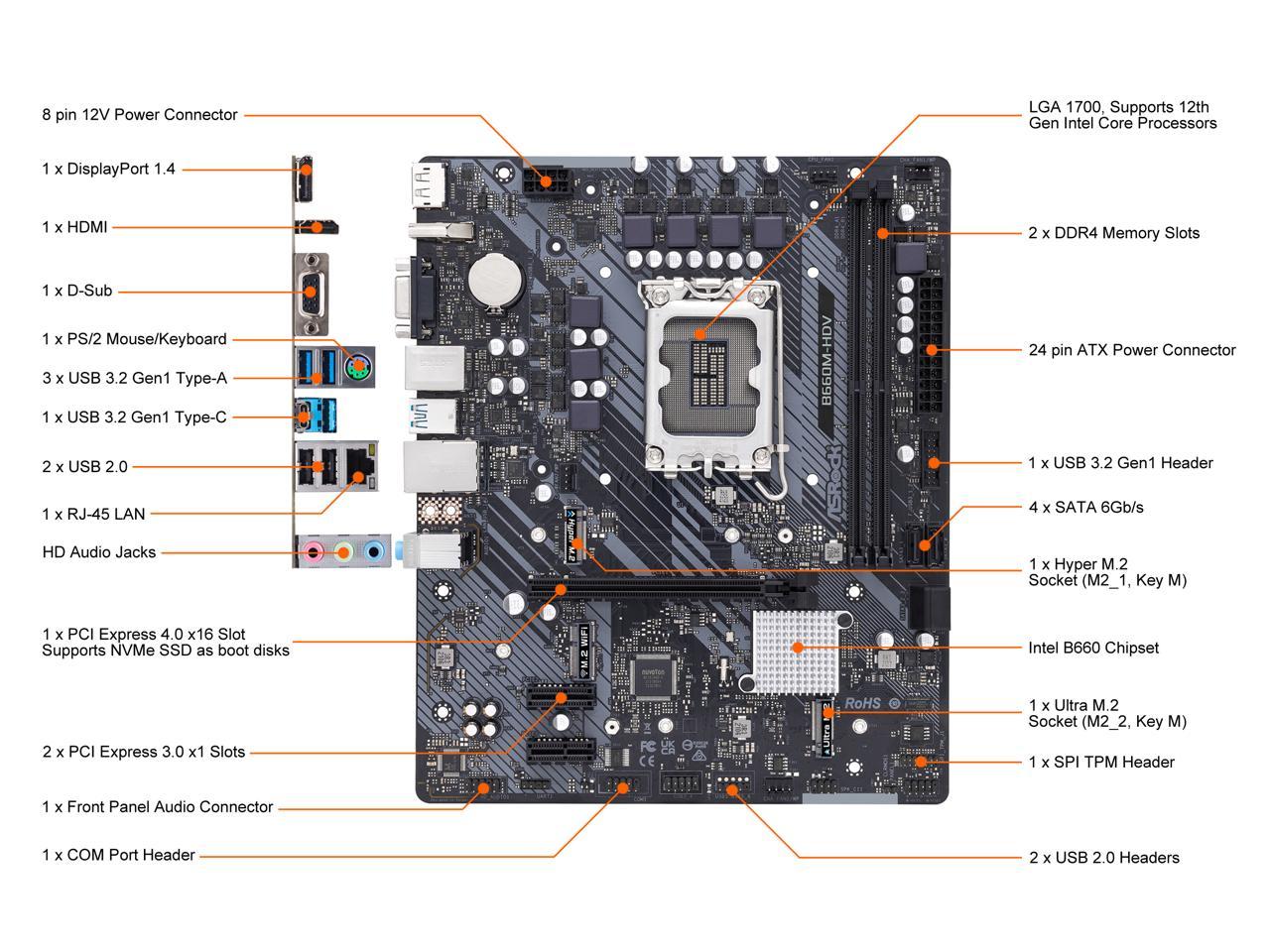 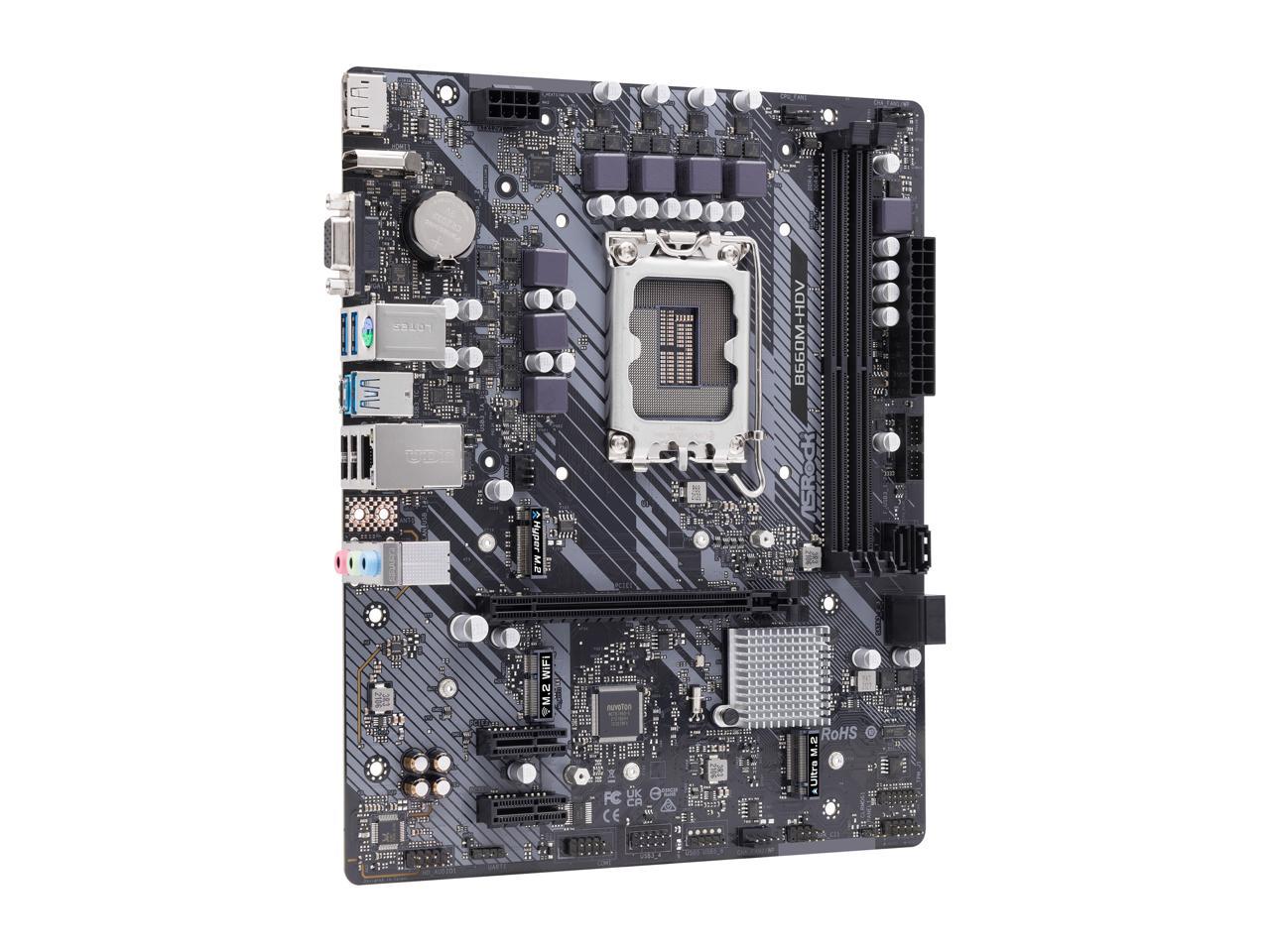 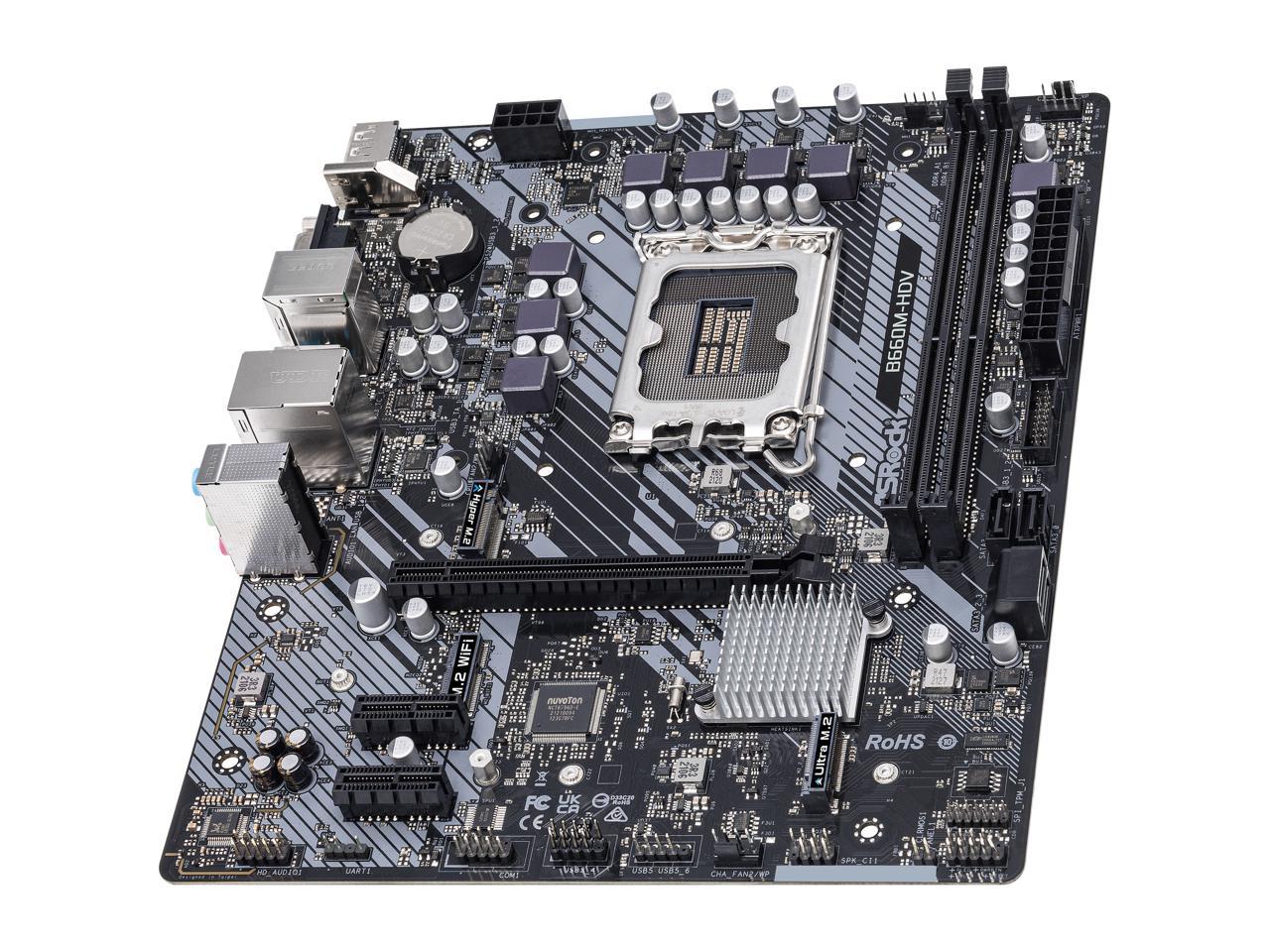 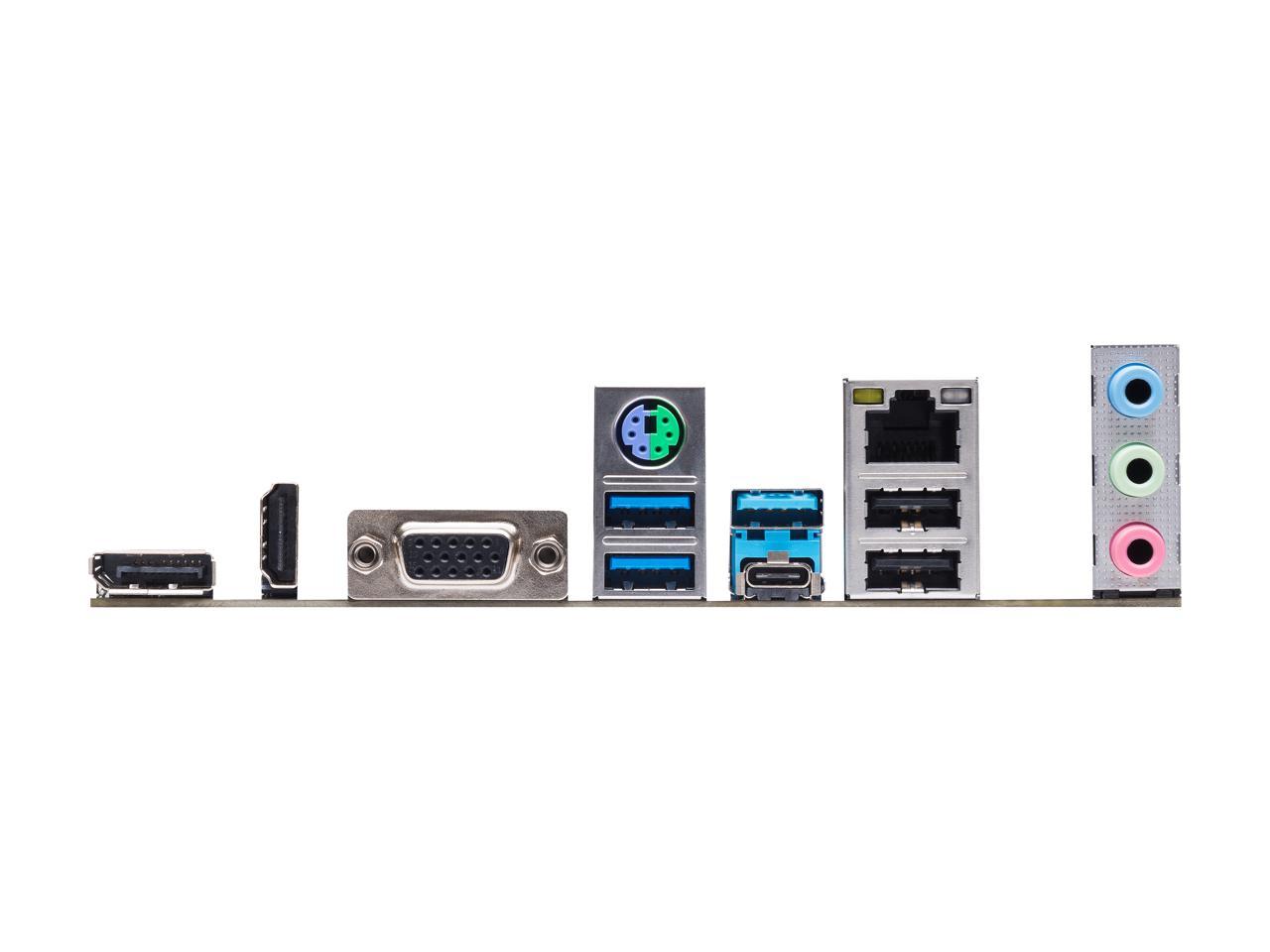 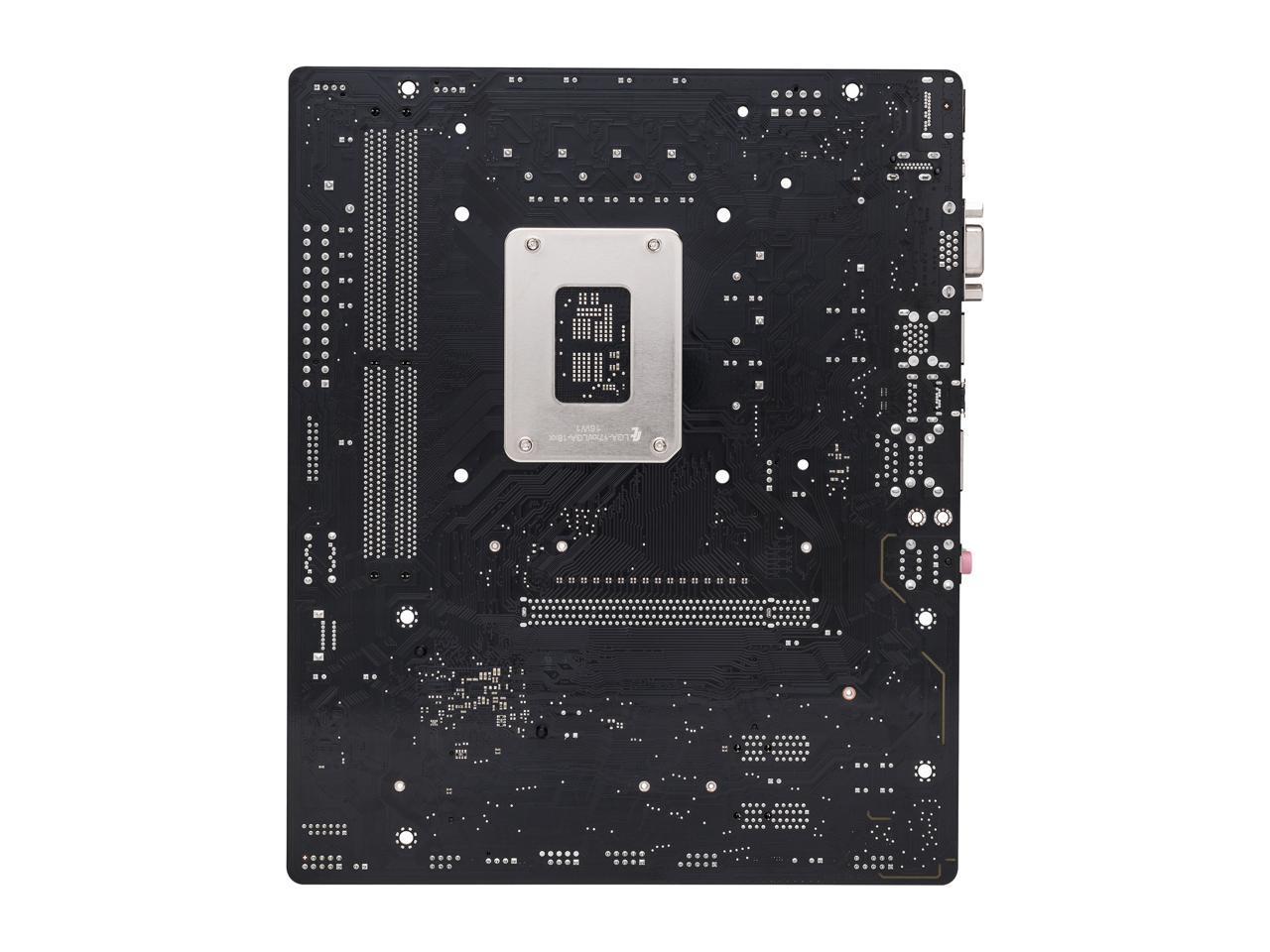 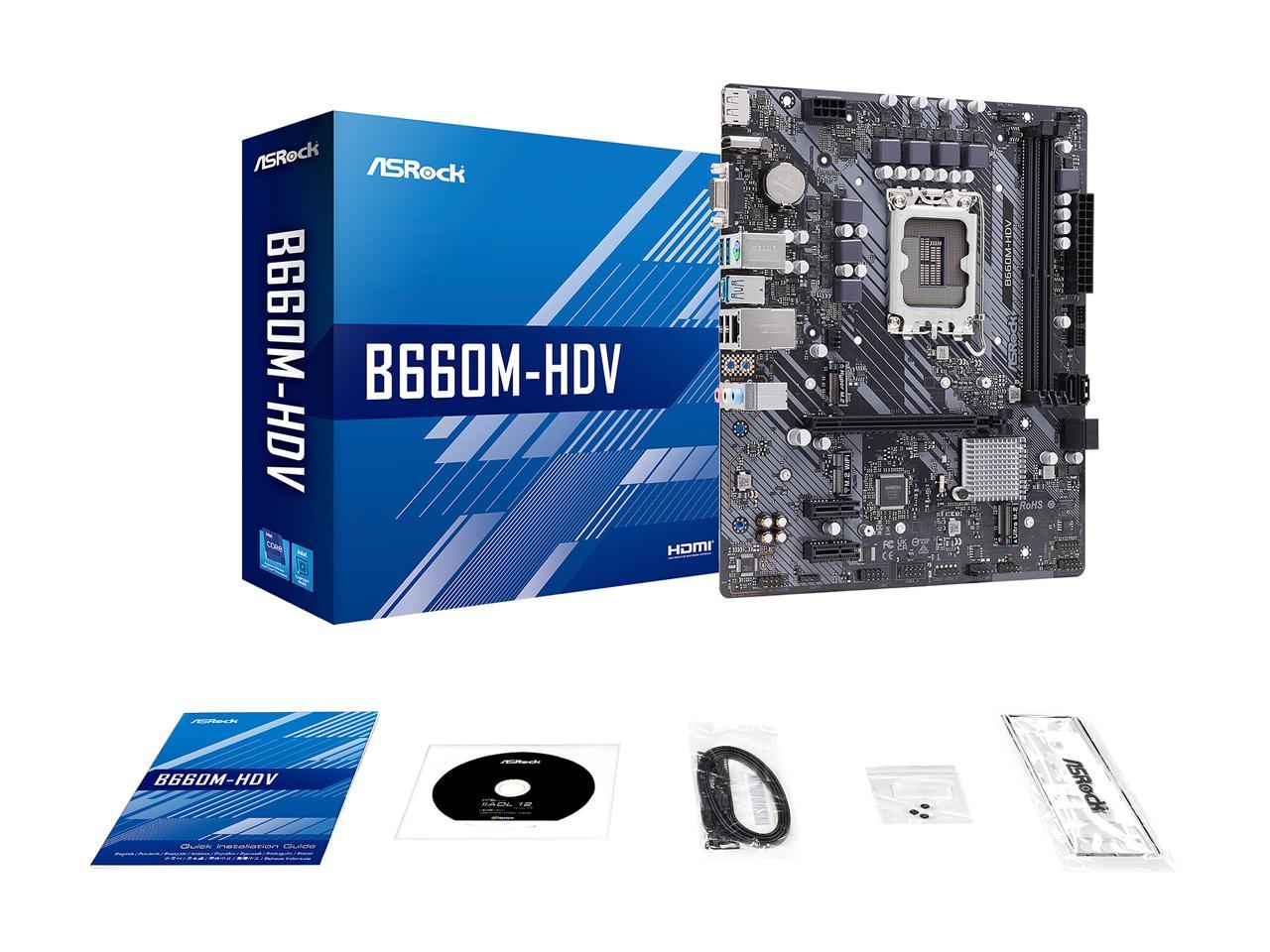 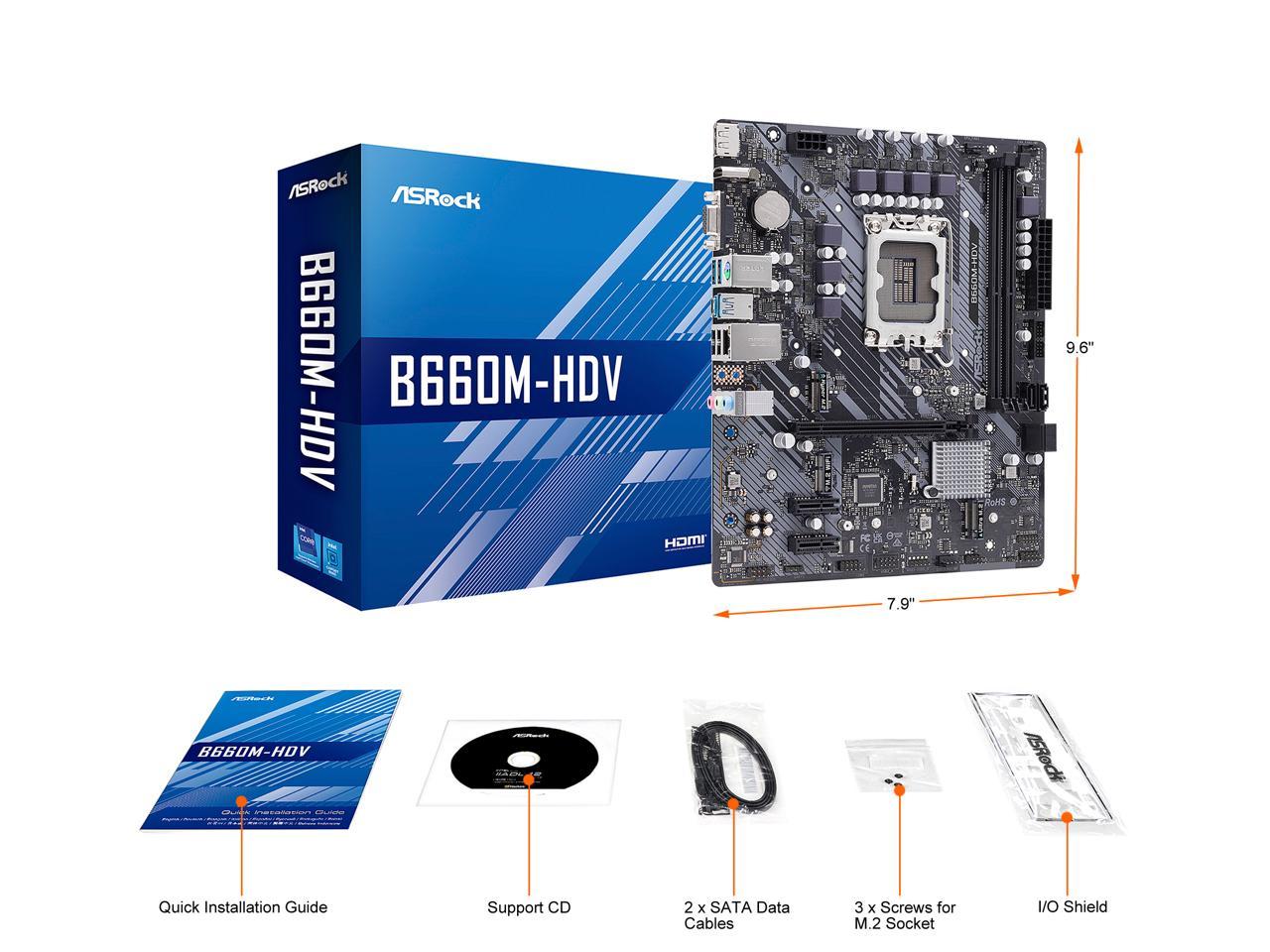 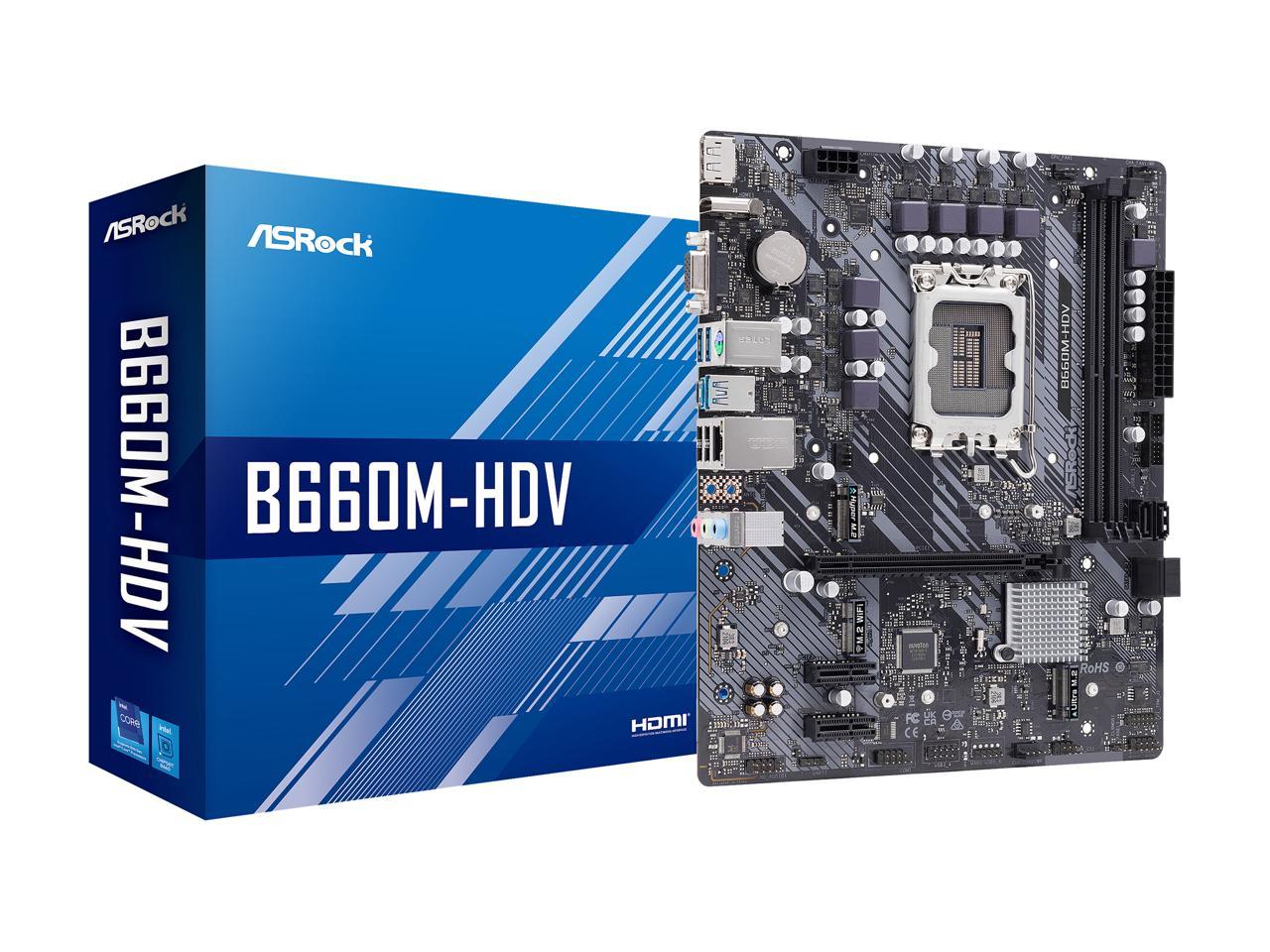 This motherboard is capable of accommodating multiple M.2 storage devices, one of which can support PCI Express 4.0 M.2 SSD that is capable of performing twice the speed compared to previous 3rd generation, giving a lightning fast data transferring experience.

* Wi-Fi module is not included.

Complete with all three types of most used connectors! Packed with a D-Sub + DisplayPort + HDMI combo.

* Supported only with processors with integrated graphics. Please check CPU support list from each motherboard webpage.

Some sensitive digital components on the motherboard are vulnerable to power surges, and the excessive current may cause your system to malfunction immediately. ASRock Full Spike Protection includes various technologies to prevent your motherboard’s components from being damaged by these unexpected voltage spikes.

Learn more about the ASRock B660M-HDV

Overall Review: 2 other exact motherboard worked fine. This 3rd one is really not working. Tried a lot of technician worksmanship like different CPUs, memory modules, bios battery, and cumulative experience from 1998 to today. Really sorry to report the problem. The box was in good shape and no abuse from the carrier can be noticed.

Manufacturer Response:
Dear Francois, Sorry for any inconvenience this may have caused you. We will be more than happy to assist you. Please contact us at https://event.asrock.com/tsd.asp Thank you ASRock Support Tech Support Email: https://event.asrock.com/tsd.asp
Anonymous
Ownership: 1 month to 1 year
Verified Owner
Great motherboard after you get past the driver issues3/28/2022 10:28:05 AM

Overall Review: First of all, this is a great motherboard. It pairs great with the i5-12400. The bios was easy to navigate and it was not boring to look at. The problem for me started when I hooked up Ethernet it didnt work so I tried to update the bios and it still didnt work. After about an hour of research I couldnt find anything so eventually I had to hook up a Wi-Fi adapter and install a new driver for Ethernet then it finally worked. I think that this isnt a common problem because I couldnt find anyone with a similar issue. Still the motherboard works great and the price is hard to bargain with.

Overall Review: Upgraded from ab350m pro4 with ryzen 1700 to this and i5-12400f. Incredible boost of performance and after reselling other parts it was just a $180 of an upgrade!

Cons: - No 10gbps USB support - No multi-gig ethernet - No troubleshooting LEDs (or any LEDs) - Only 2 RAM slots

Overall Review: As far as I can tell, this board shares the same PCB as the H610-HDV, and as a result doesn't offer many additional features compared to that board. The ones it does have (an extra gen4x4 nvme slot, RAM overclocking and 2 extra 5gbps usb ports) may justify the current 10 dollar premium though. The Gen4 nvme option will be important as time goes on even if there's not much need for it currently, and RAM overclocking is nice if you plan to use the Intel iGPU (though remember that h610 supports 3200mhz already, compared to 2666 on h510, so the overclocking features are not as big a gain in this generation). The limit of 2 RAM slots compared to 4 on most B660 boards could potentially mean it allows better RAM overclocking, but I have not been able to get any kit completely stable past 3466mhz. That may be due to the memory controller in my CPU though. The BIOS has no options for BCLK overclocking, but that's to be expected. The only big surprise was an option to enable AVX-512, which I have not tried. I updated my board to BIOS 3.02, as the board would not consistently boot with 2 sticks of RAM with the BIOS it shipped with. The lack of any trouble LEDs or POST beeps made it almost impossible to diagnose why the board was not booting when I first assembled it. If your board seems DoA, be sure to try just a single stick of RAM in either slot (you may need to try different combinations of RAM and slot) and if you can get it to the BIOS, be sure to update it. Since doing that mine has been faultless booting with any RAM kit I've tried in it. With a 12100f, stress tests results in the VRMs getting up to about 80c. A 12400 would probably be okay on this board, but I would not be comfotable putting a 12600k or any chip with more than 6 physical cores on here. That does unfortunately limit your future upgrade paths. So it's best to think of this board as an h610 with some bonus options, rather than comparing it to other b660s. Really the only reason I would consider spending more on any h610 board would be for 10gbps USB. You could get 8gbps using one of the PCIe x1 slots, or else take up the x16 (or one of the m.2s) but it will hurt the value proposition compared to other b660 boards that include the feature at that point. That's the one big omission on this board that I would otherwise be completely satisfied with.

Overall Review: When working, im sure this is going to be a great budget motherboard for a 12th gen i3 or i5. However, it showed up dead on arrival and after swapping out every single other part it was determined the issue was indeed a dead motherboard. Frustrating but sometimes these things happen, hopefully the replacement i requested will fix the issue.

Manufacturer Response:
Dear Valued ASRock Customer, We sincerely apologize for any inconvenience this may have caused you. Please trouble shoot the mainboard whether the issue is resolved. • Unplug the ATX power, remove all components from mainboard. • Remove the mainboard from chassis, place it on mainboard’s box. • Clear the CMOS. • Reseat the CPU and heatsink fan. • Test with 1 x memory module (un-buffered), switching another memory if its same issue. • Test with onboard video (CPU with iGPU or test with VGA card). • Connect the monitor. • Plug the 24 + 8 or 4 pins ATX power. • Connect the chassis power switch to mainboard. • Turn on the power to check if its post. If you have any technical support inquiry, please contact us at http://event.asrock.com/tsd.asp We will assist you shortly. Thank you ASRock Support Tech Support Email: http://event.asrock.com/tsd.asp
dcl
Ownership: 1 week to 1 month
Verified Owner
Outstanding performance for cheap1/21/2022 9:39:47 PM

Pros: Very good performance compared to the high-end of the last-gen Coupled with I5-12400F for only $300, performance is hard to beat

Cons: I knew the PCIe x16 was "only" 4.0, and I knew the MATX board only had 2 additional PCIe ports, both x1, but for the price I don't see those as serious issues.

Overall Review: Intel finally has a price/performance champ, and the B660M-HDV board from Asrock makes taking advantage of Intel's performance easy and cheap. I plugged it in, added RAM and a graphics card, and was ready to work.

Cons: Had a nonworking ethernet a lot of things with it werent working properly.

Overall Review: Absolutely terrible I decided to put this on my computer just today and have nothing but problems. I ended up having no ethernet so I had to use an adapter with a USB in order to get any kind of Internet. I am replacing this Motherboard soon in a couple days

Manufacturer Response:
Dear Valued ASRock Customer, We sincerely apologize for any inconvenience this may have caused you. Please try following whether the ethernet issue is resolved. • Unplug the ATX power. • Clear the CMOS (refer to user manual under page 17 link: https://download.asrock.com/Manual/B660M-HDV.pdf ) • Download and install the LAN driver link below. Link: https://www.asrock.com/mb/Intel/B660M-HDV/index.us.asp#Download • Check the Router and modem are working normally. • Test with another LAN cable. If you have any technical support inquiry, please contact us at http://event.asrock.com/tsd.asp We will assist you shortly. Thank you ASRock Support Tech Support Email: http://event.asrock.com/tsd.asp
Mark T.
Ownership: 1 week to 1 month
Verified Owner
Works well for a inexpensive build with i5 12100f.4/13/2022 10:34:13 AM