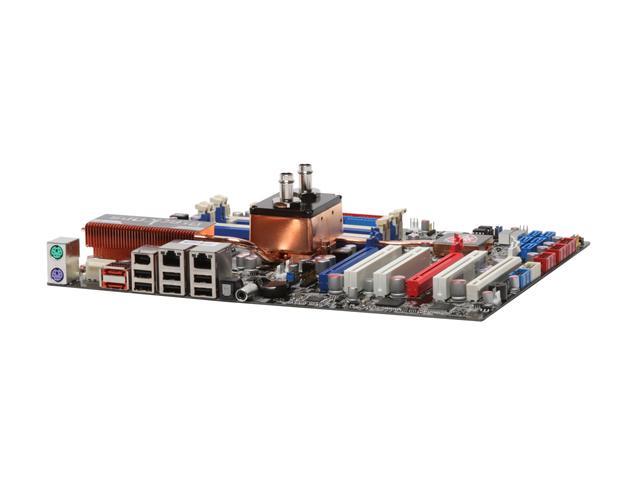 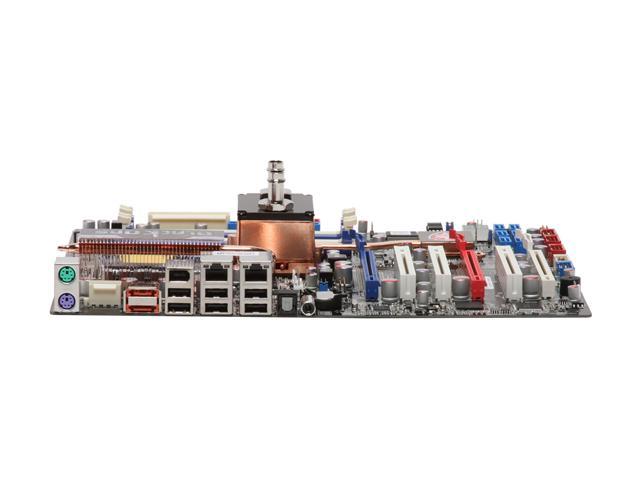 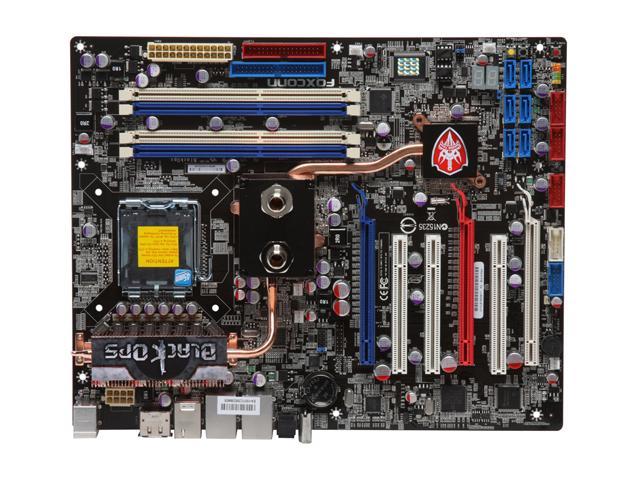 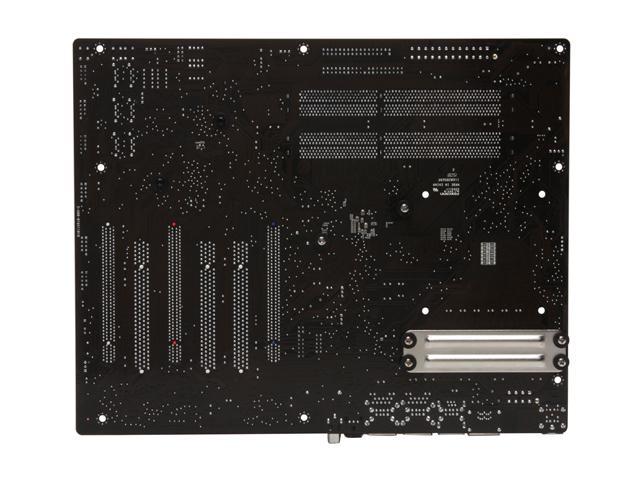 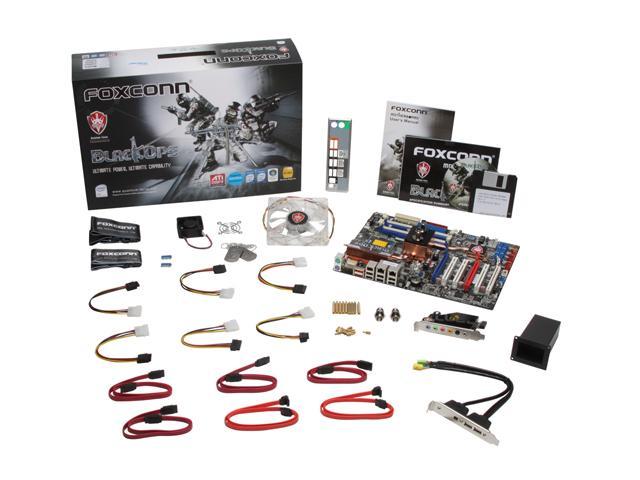 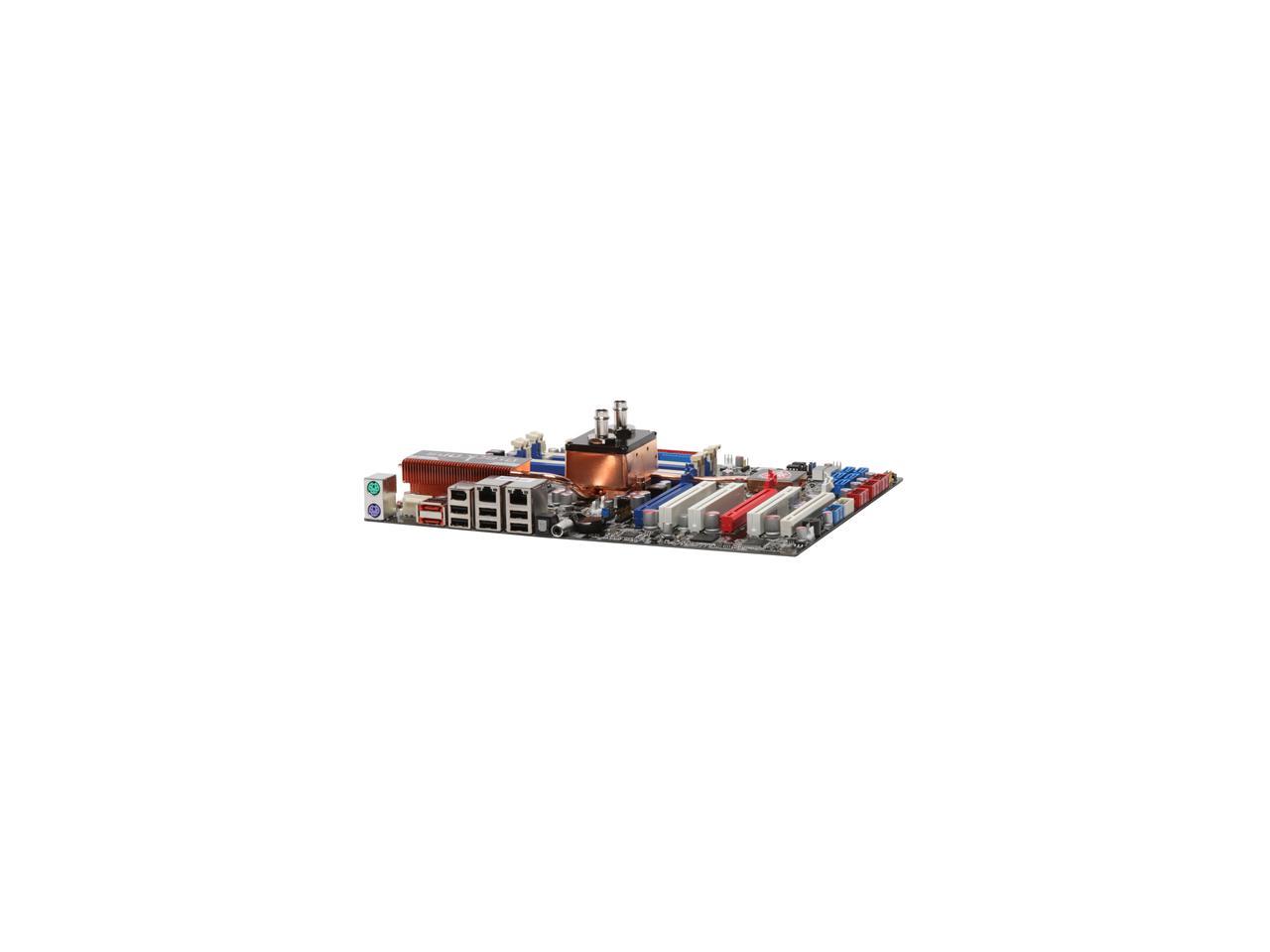 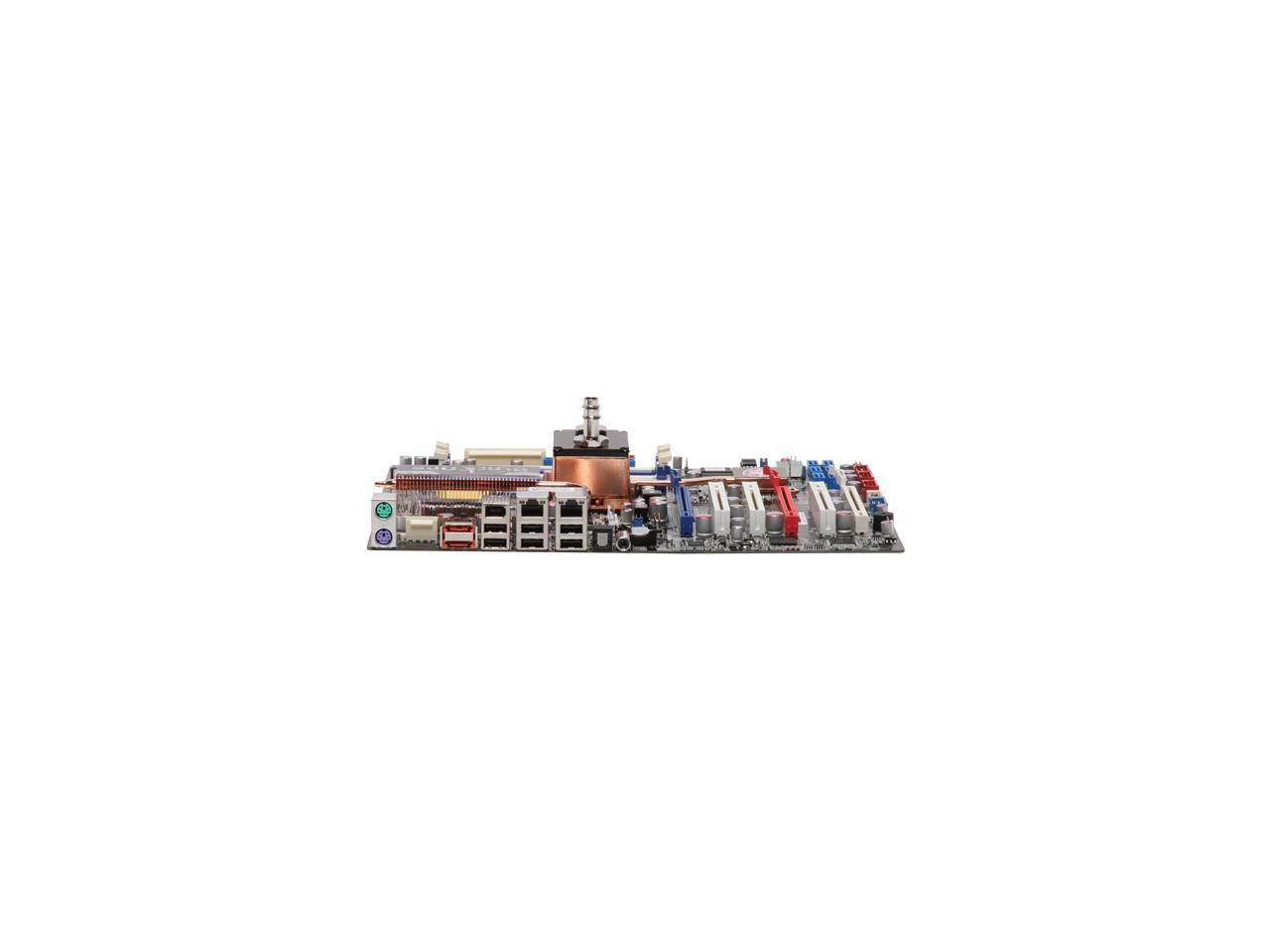 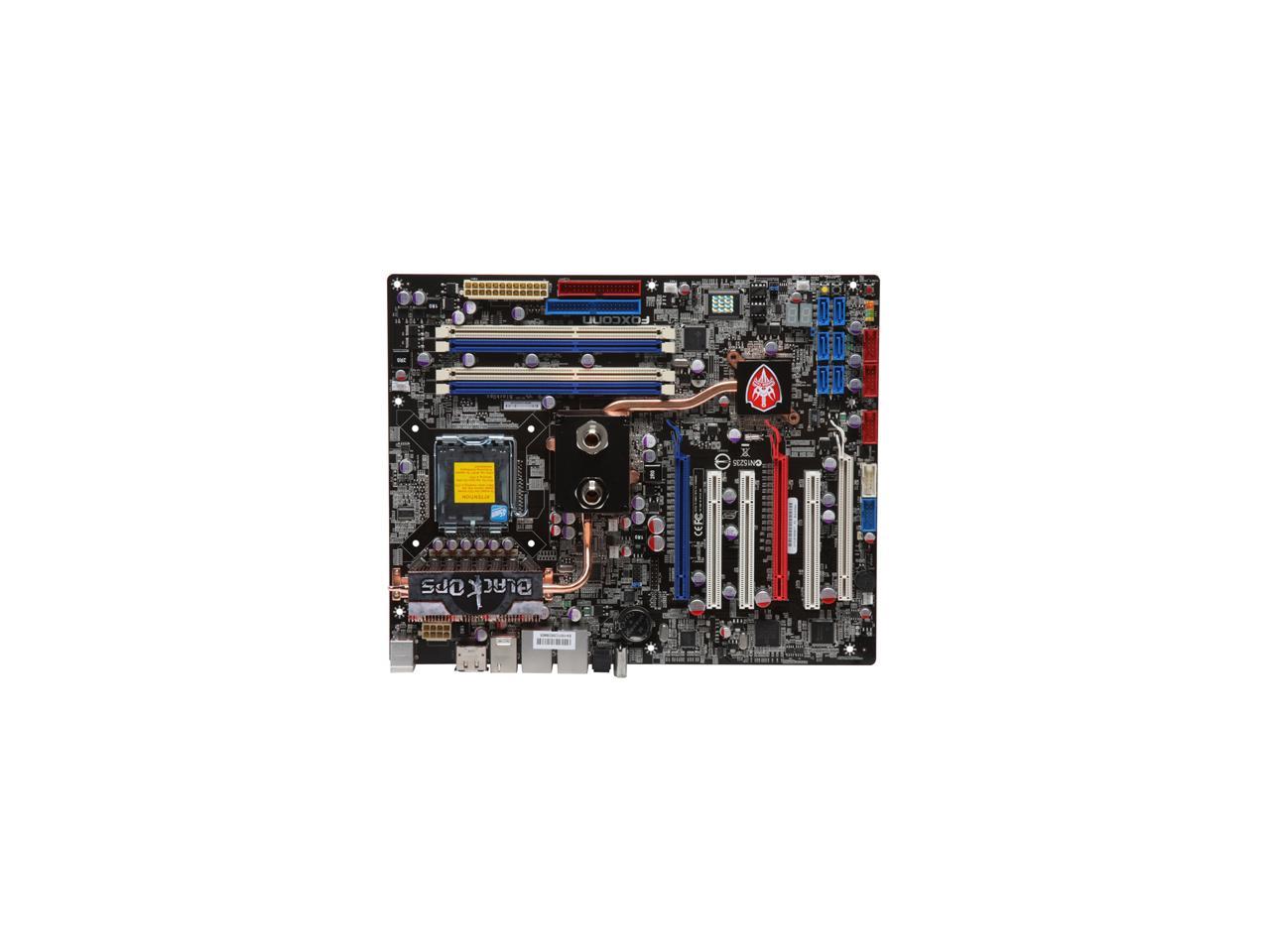 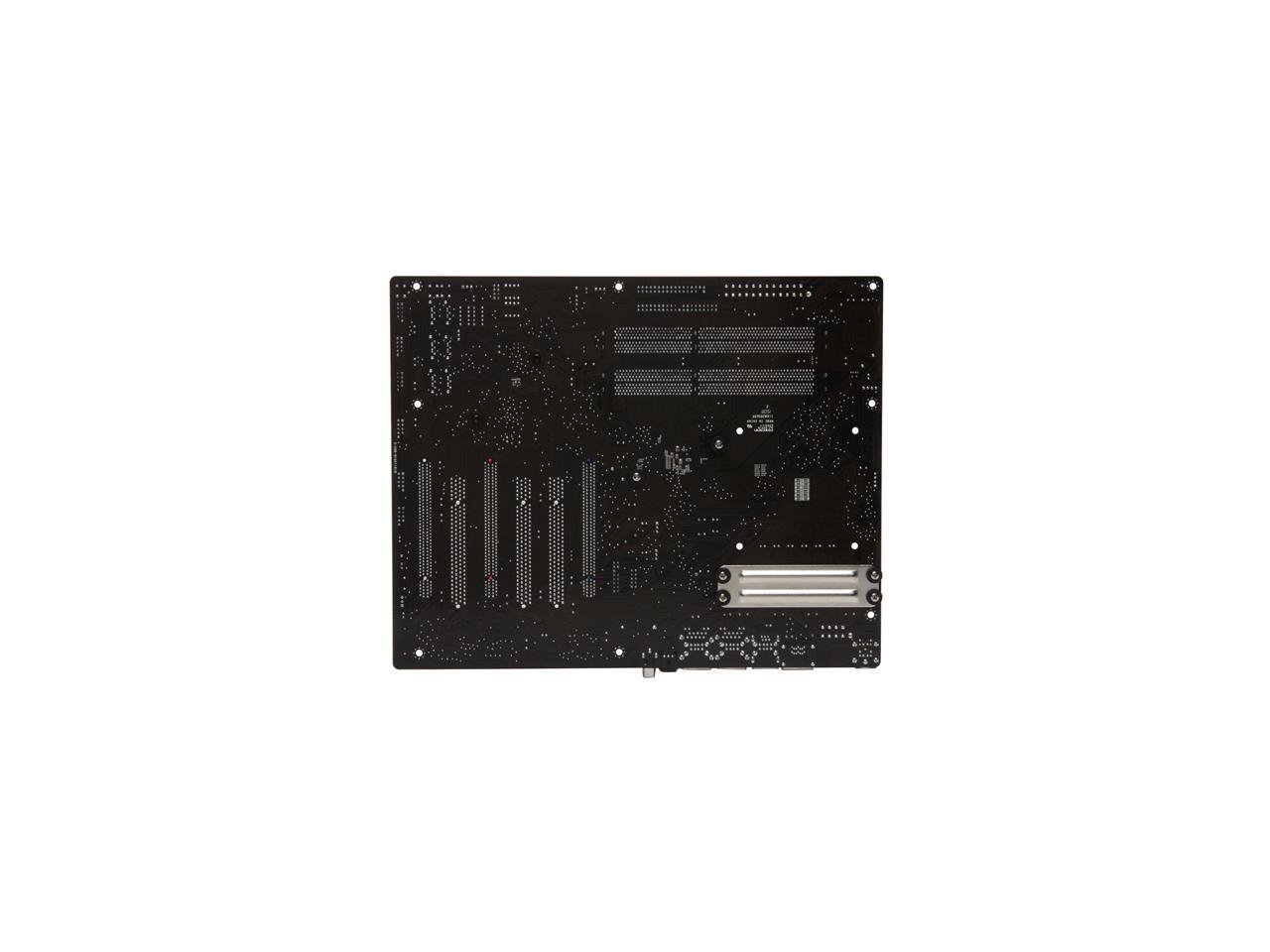 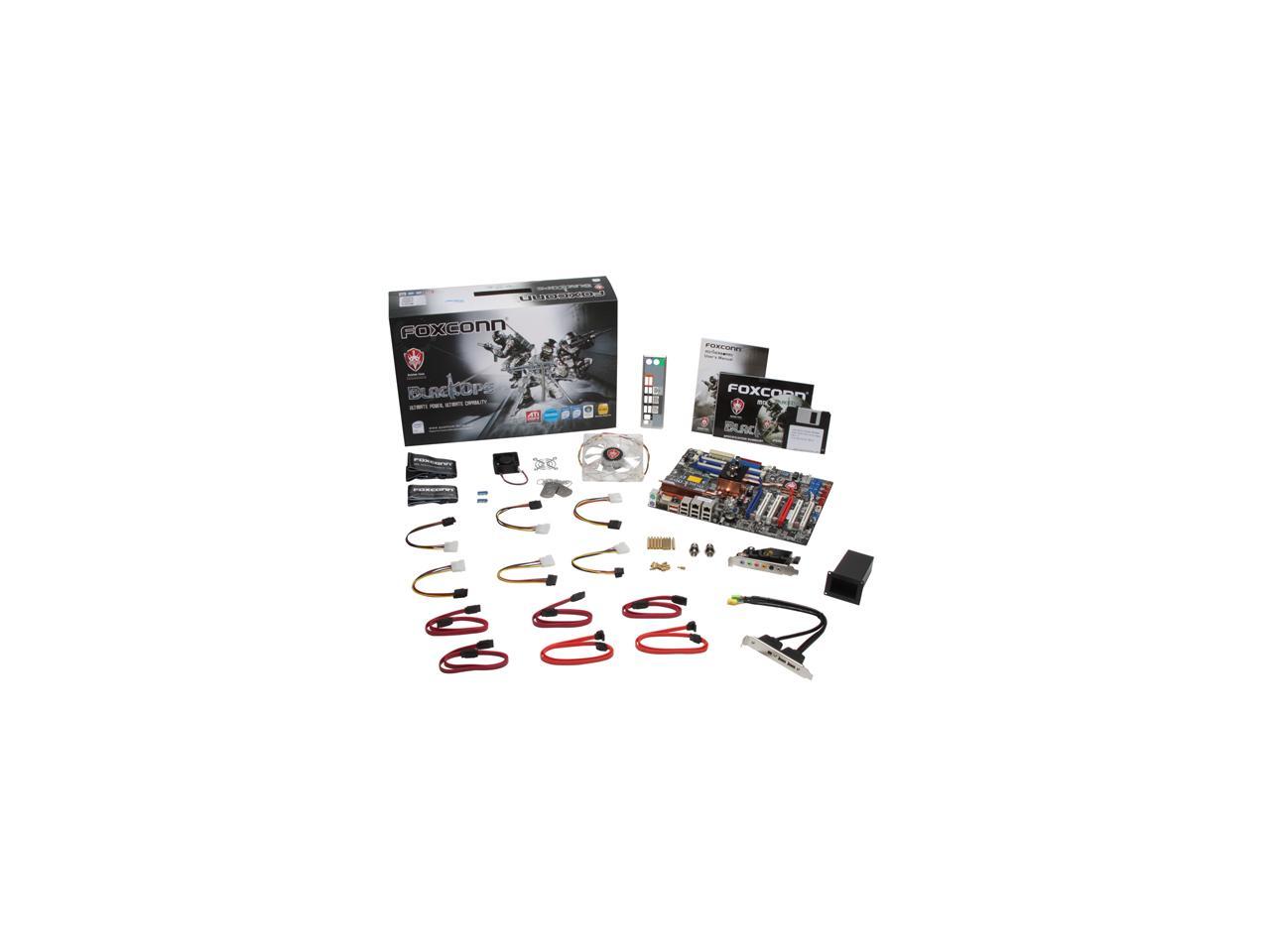 (80) Write a Review
OUT OF STOCK.
Overview
Specs
Reviews
They won't see you coming with the Foxconn BlackOps high-performance motherboard. This ATX motherboard uses the X48 chipset and supports Intel Core 2 Duo, Core 2 Quad, and Core 2 Extreme processors along with Intel Pentium CPUs. Up to 8GB of DDR3 memory can be installed making use of 1600, 1333, 1066, 800 or 667Mhz DIMMs. Raise your performance by taking advantage of the Quantum BIOS functionality with a user-friendly menu that allows you to tweak a wide variety of settings – which, along with the robust 8-phase Digital PWM lets enthusiasts achieve up to 2000 Mhz on the front side bus.
Achieve graphic supremacy with a trio of PCI-E x16 Gen 2.0 slots with CrossFireX support while the dedicated SONAR daughtercard provides incredible 7.1 channel HD audio to make your games sound as good as they look. Keep things cool with the 4in1 Quantum cooler allowing air, water or LN2 cooling of the NB, SB and VRM areas and the Quantum Flow cooling system improves airflow around the GPU. Dual Gigabit LAN, 12 USB 2.0 ports, SATA RAID and FireWire are all integrated on the board.

Pros: Board is an overclockers dream, amazing amount of options to get maximum performance from your components. In testing and tweaking with the board I've had a QX9650, and an E8400 at 4 gz on air easily. I've also used two different sets of memory, mushkin ddr3 1800 (2 x1 gb), and Corsair Dominatior ddr3 1800 (2x2gb) running from 1600 - 1800 depending on fsb. Never had any trouble posting, and the motherboad comes with two socketed bios chips, plus automatic overclocking recovery that works flawlessly. Board has worked so well in testing, I'm moving it to my watercooling setup this weekend. Board layout is excellent. Must know what you're doing when working with this board, steep learning curve, but absolutly worth it for the performance you can achieve.

Cons: As others have stated, top piece of water cooling for northbridge is andonized aluminum, but it is coated with some kind of substance, so no aluminum is actually exposed to water, but just replace the nozzles with brass fittings, and the system should be free of galvanic corrosion. Audio card not great, but I use an after market card. Manual could be a little more informative, but the information is out there on the forums. The included northbridge fan sits to high mounted, couldn't get a Zalman 9700 mounted because of clearance issues, so I didn't use the northbridge fan while testing, but mb temp never got above 45 degrees Will be a none issue when I change to water cooling.

Overall Review: Usually don't review products I buy here, but the negative comments on this board by some noobs prompted me to answer some comments. Error code meanings on the board are easily found by going to Phoenix/Award bios web site, codes are in hexedecimal and the guides explain them (I've never had any errors), but researched just in case. Usually you mount the motherboard, then add cards, so why do you need to get to the motherboard screw? Why do you need to get to the battery? Between the on board clear cmos button, it also has a cmos clear jumper, and the crashfree bios recovery. Using an after market sound card clears the area. Most motherboard ram slot releases are blocked by graphics cards nowdays, at least in all my other motherboards, again no big deal. People saying they have high tech knowledge when its easily apparent they don't understand much.

Cons: None, need to have good overclocking experience

Overall Review: Realized I made a typo on my previous post. North Bridge temp, not motherboard temp never got above 45, no water cooling, no fan mounted just open to air flow from case. Anandtech has a quick review of this motherboard, with a more detailed review to follow.

Pros: I love this mobo. It overclocks so easy. I got my e8500 from 3.16 to 4.12 stable on air without upping voltage at all. I grabbed it when it was on the shell shocker for 140.00 (a steal for this mobo) and wow. I was blown away with all of the options available in bios. I love the fact that it has 2 bios' that are easy to switch to with the jumpers. You can save bios configurations and load them VERY easily.

Cons: I use the fox logo changer software that came with the mobo and it flashed my bios and wouldnt boot. I did this twice, once on each bios (I'm kindof slow) But after about 10 minutes on the phone with foxconn they are now sending me 2 new bios chips no charge to me. A++ Customer service.

Cons: None! I was so happy with this Foxconn motherboard I bought a Foxconn A79A-S and an AMD Phenom II x3 720 combo for $200.00 that seemed like a steal. Didn't really need it but I wanted to try a Phenom II Black Box @ overclocking. Addicted to computers. Newegg Rocks

Cons: Chipset cooling is designed for water cooling, so air cooling with the fan supplied is not very effective and noisy. Also, you will have bit trouble putting big CPU cooler like Freezer 7 Pro.

Pros: After opening the package I soon discovered all the included goods this board has to offer, very large box packed to the max with extras. Overclocks my Q6600 with ease, running 9x multiplier with 450 fsb getting me 4.05GHz stable with 1.5 vcore. Under normal use i drop back a little to 3.8GHz at 1.43v. Overclock recovery works great if board fails to post and my OCZ Reaper HPC 4GB (2 x 2GB) of DDR3 work just great in this board.

Cons: Nothing really that I have came across so far, does everything I wanted it to do.

Overall Review: Nice improvement over my old Asus P5n-D motherboard with the budget 750i chipset.

Pros: Nice system board with good features, and a lot of OC features that allow you to tune for better performance. Very good for people who water cool.

Cons: If you air cool, be aware that the NB heatsink is VERY close to the CPU die and between the NB heatsink and it's cooling fan, it sticks well above the motherboard. As such you need a CPU heatsink that does not extend too much past the area of the OEM design, or you may have clearance issues. Please note the specified DDR3-1600 memory speed is ONLY obtainable if running a 400Mhz or faster system bus (default is 333), otherwise it will only reach a factor of 4:1, ie with DDR3-1600 there is no overclocking the memory unless you start changing a lot of settings and spending a lot of time tweaking. Further you should try to stick to memory that isn't overvoltage as you are warned this may damage the memory controller, and thus will wipe out the motherboard.

Overall Review: Due to the location of the NB heatpipe heatsink, it's best to use a CPU fan that blows in the OEM direction (ie down onto the motherboard) for best cooling if running air.

Pros: GREAT price, Easy build. Quick Delivery Read the critics and I was scared. Didn't use book to build. the installation paper was all that was needed. Overclocked on air to 3.4 GHTz GSkill DDR3 went right to 1600 when set Bus speed at 400 MHTZ. Voltage stayed low. No temperature problems.

Cons: Temps were so good with the a $25.00 Rosewill HSF I want to Overclock higher. Crossfire wouldn't work. Updated the bios and will try crossfire again. Built many Win 95 & 98 systems and was happy at how easy the build was with Win 7 x64 x32 duel bios.

Overall Review: Just took the motherboard out put HSF with CPU on. GSkill DDR3 1600 memory in, XFX 9800GT in. Stock sound Card WD 1000GB Hardrive and fired right up on my Newegg $50.00 case stock PSU. Very suprised at the negative reviews.Prime95, CPU stability Test, Memtest86 are all no errors and runs cool.