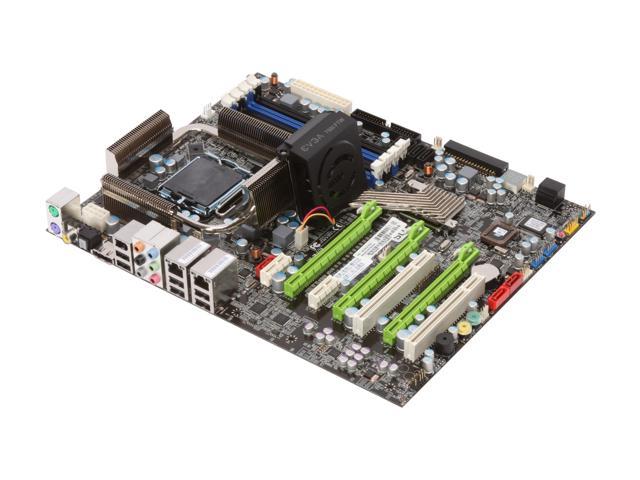 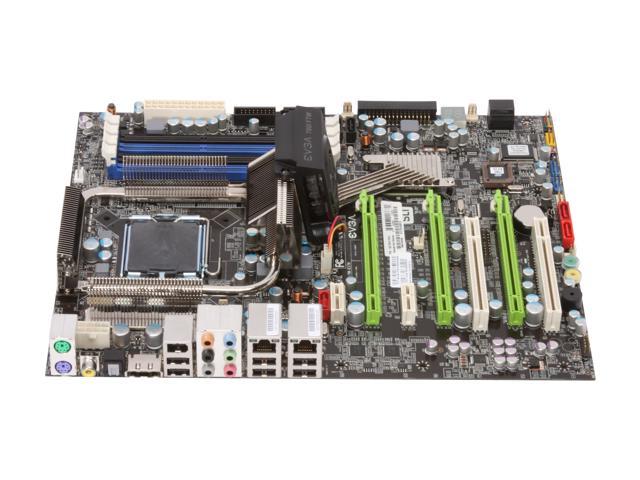 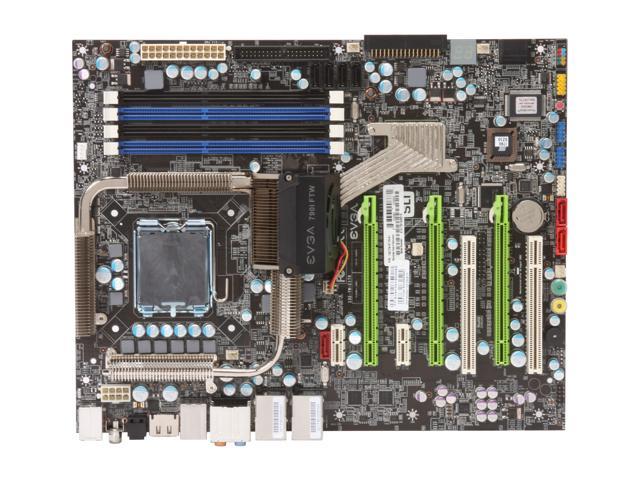 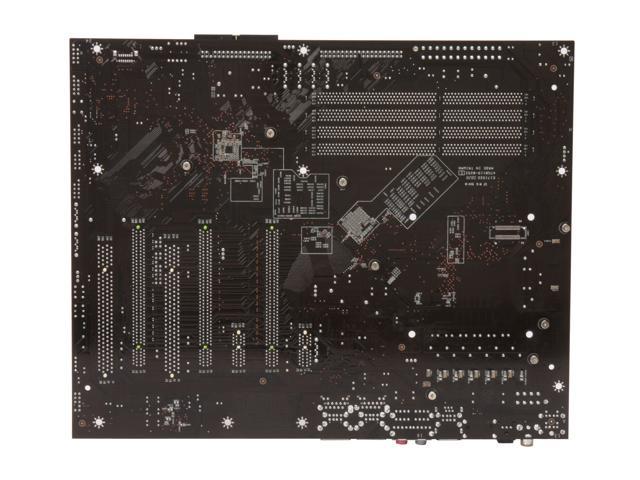 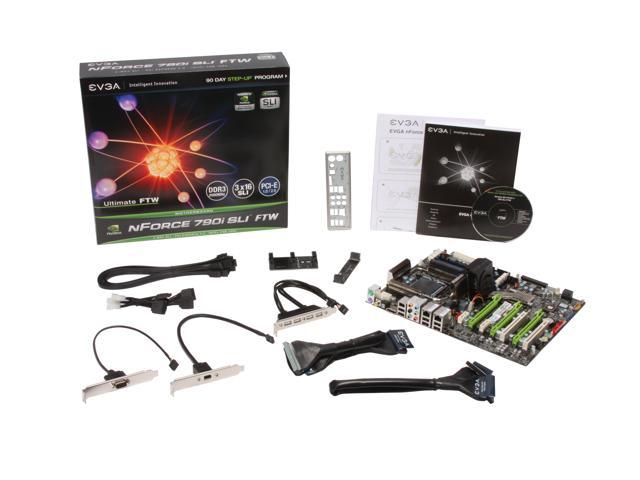 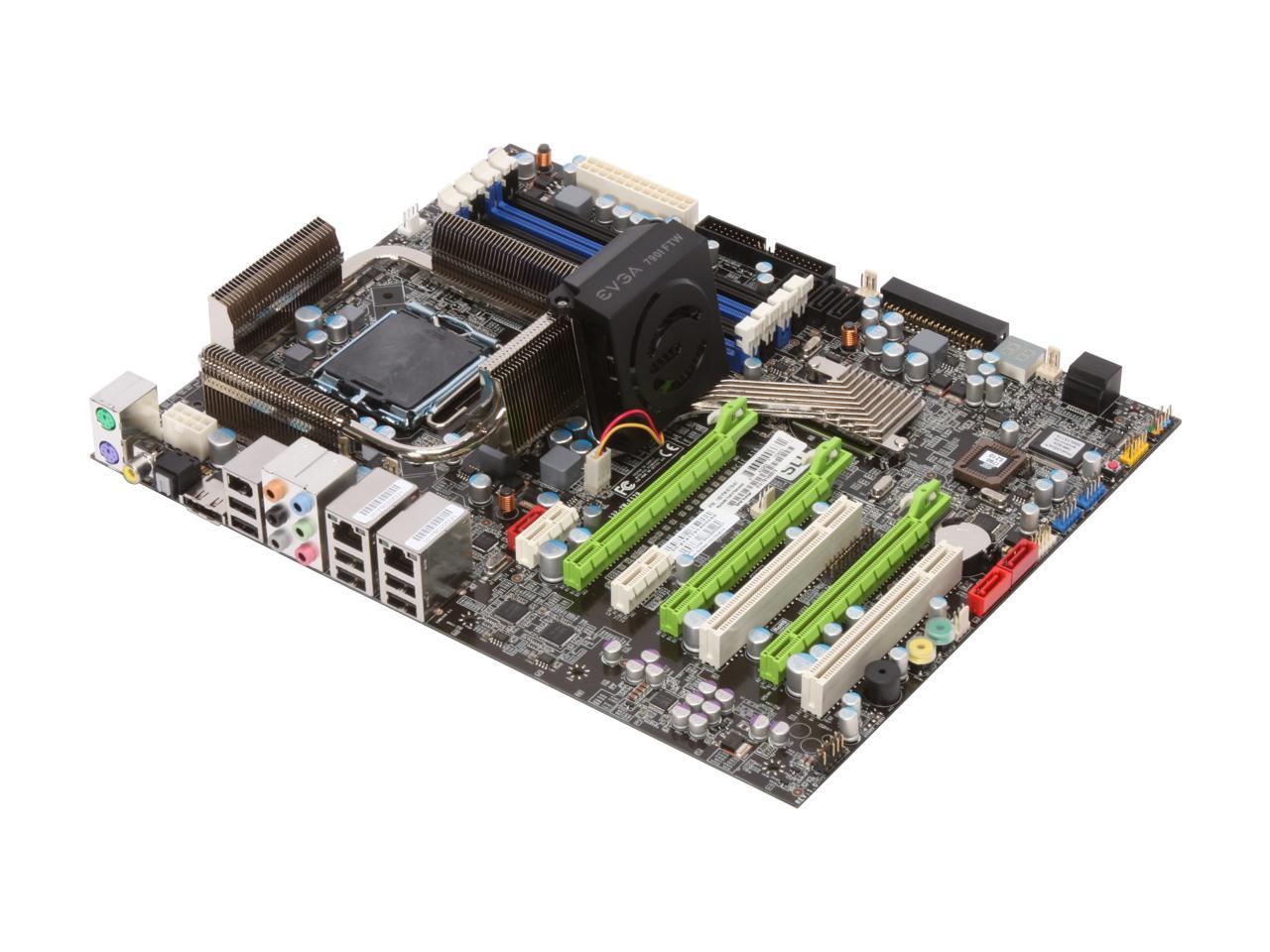 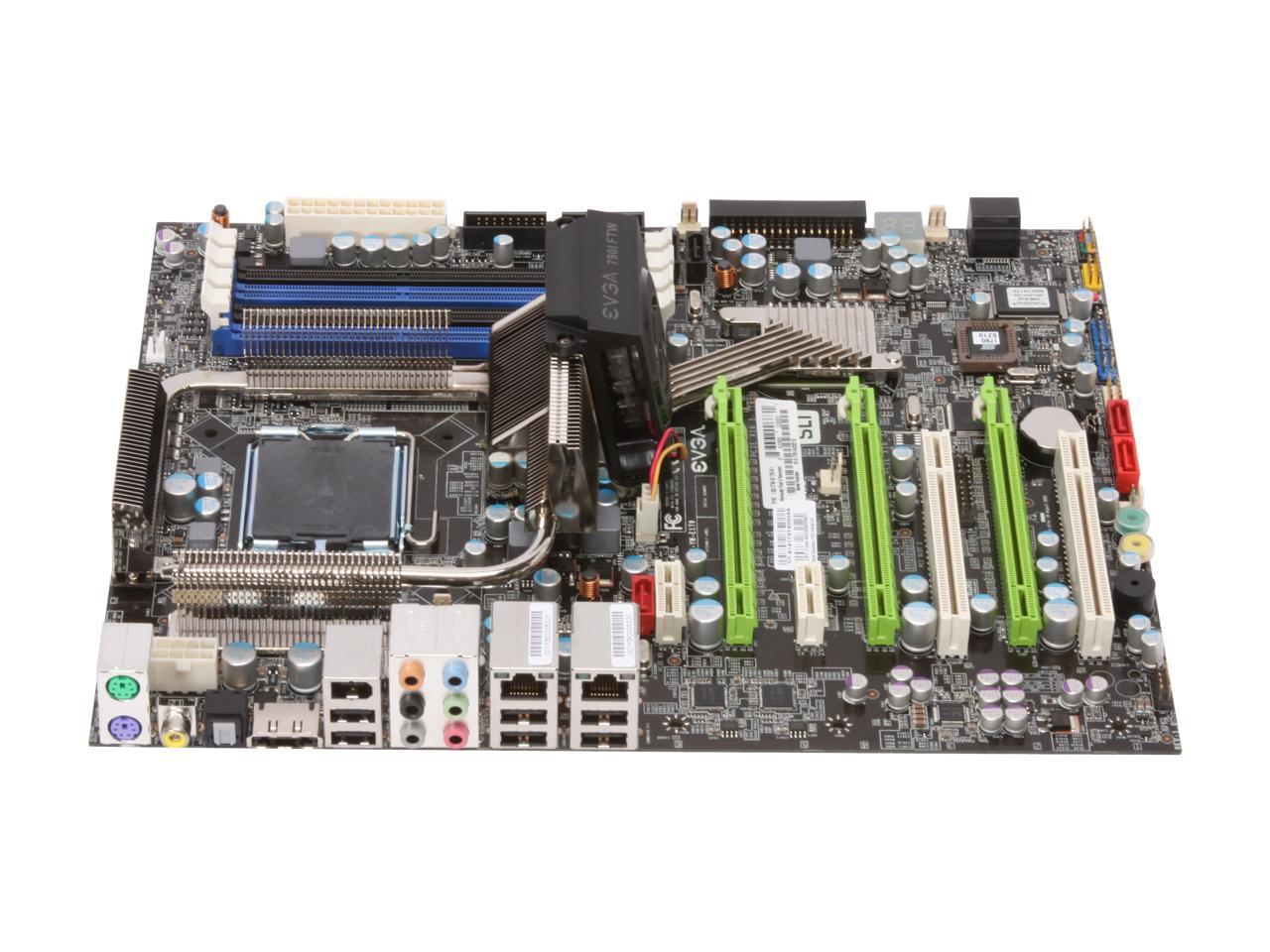 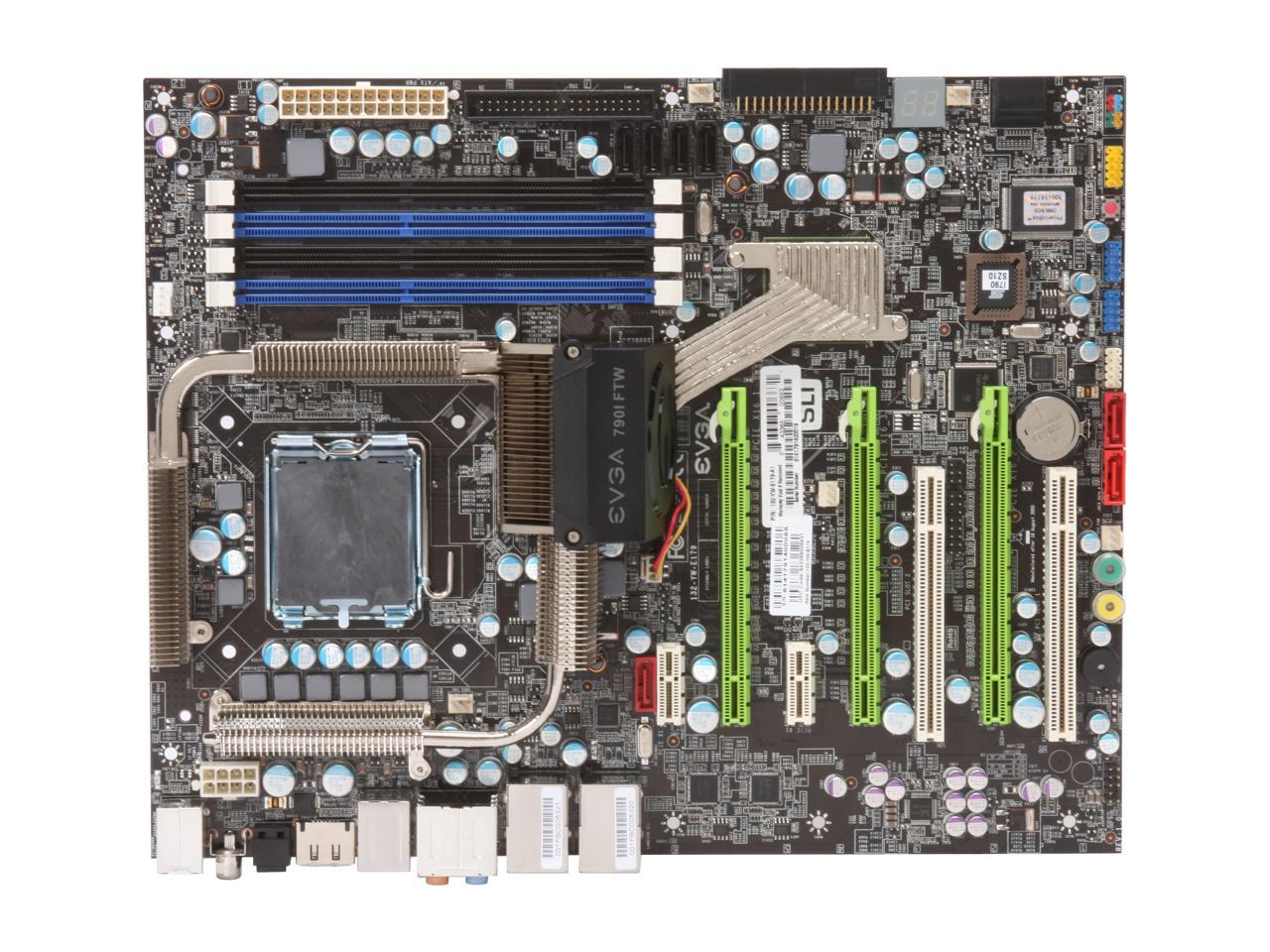 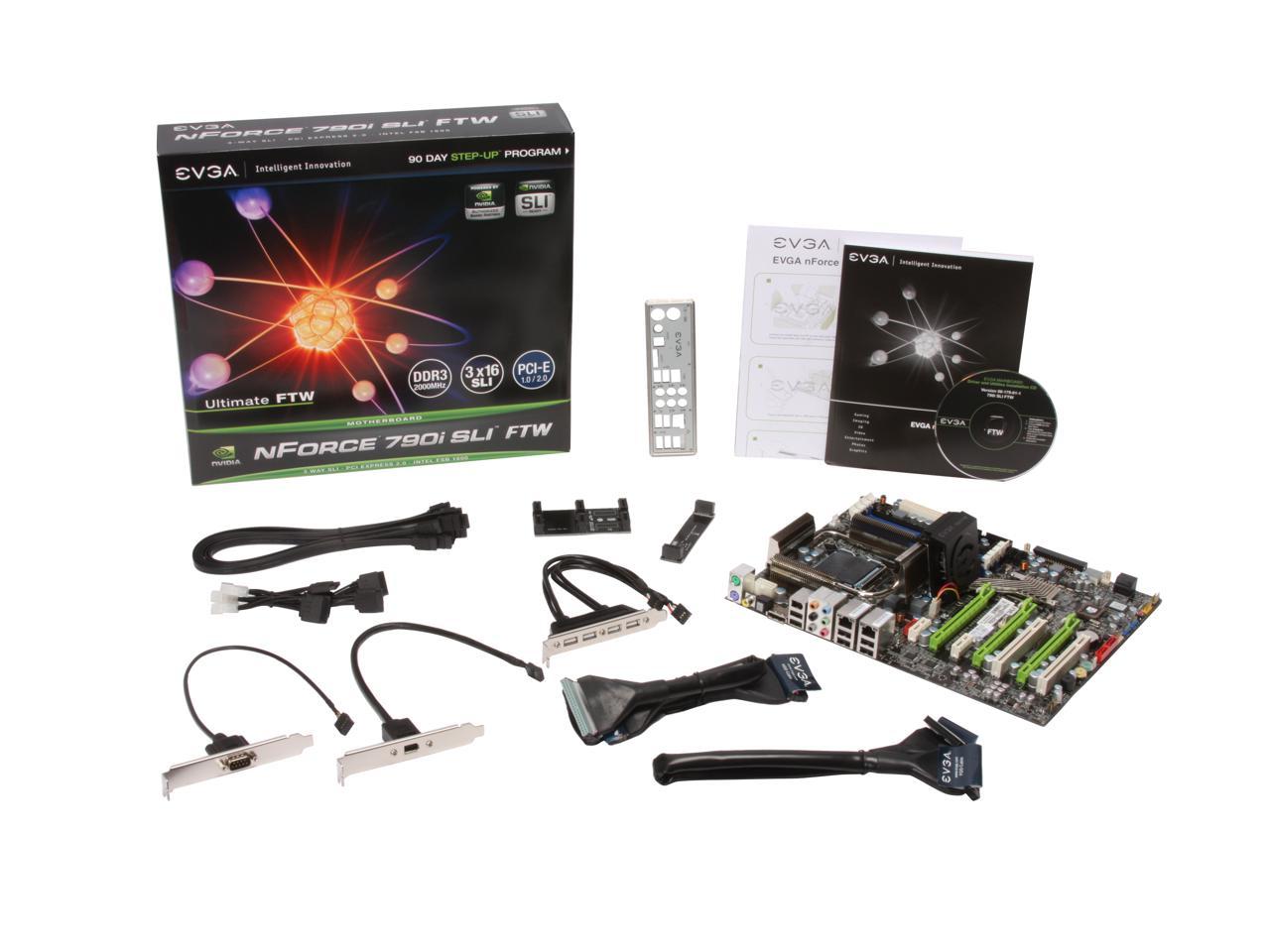 (101) Write a Review
OUT OF STOCK.
Overview
Specs
Reviews
From one of the premiere nVIDIA card manufacturers comes a motherboard based on nVIDIA technology. The board is based on the nForce 790i SLI MCP and supports Intel processors up to the Core 2 Quad and Core 2 Extreme at FSB speeds up to 1600MHz. You can install up to 8GB of DDR3 2000 memory.
There are 3 PCIe x16 slots supporting 3-way SLI video. There is no downgrade of slot speed with this board, the 790i supports full x16 bandwidth across all three slots to take full advantage of your video cards. The board also supports Quad-SLI using 2 dual-GPU graphics cards.
Included in the 790i MCP is native support for Gigabit Ethernet and RAID. Having these technologies native increases throughput by eliminating any bottlenecks on the motherboard. The Dual Gigabit ports support DualNet technology for a fast 2GB network connection. RAID levels 0, 1, 0+1, and 5 are supported and can be changed on the fly with MediaShield.

Cons: I'm sure it's a good board... if you don't receive two falty boards in a row. 790i FTL + OCZ DDR3 1600 do not like each other. Ram worked fine on another board. EVGA tech support gave me the same walk around. Also tried to tell me that the C1 error and not being able to post on this board was due to my PSU rofl...

Overall Review: If you want a working motherboard... don't buy EVGA. Thank you newegg for the good customer support and the refund. I will be purchasing another board from you guys when you receive the RMA.

Pros: I'm sure it is a good board if you receive one that isn't faulty...

Cons: I had to RMA my first board through EVGA because it was not booting past POST, my replacement board that i received has now broke, I cant get it to boot past the initial FF LED display!!

Pros: Good board that posted and installed windows first time. My Coolermaster 120mm cooler fit great with no interferrance with other components. The manual that came with the board was one of the better ones I've seen.

Cons: If you are using an aftermarket cooler with a backplate, I recommend not using the backplate if you can help it. I ended up RMA my first board because it started up, then after 3 days wouldn't post. The second board did the same thing after 5 days. After troubleshooting the issue, I found that it was the cpu cooler backplate that was shorting out the motherboard, even though there was insulation on the backplate. Tech support was ok, but not very helpful. I purchased their Saturday delivery when registering the product, but they didn't pay for return shipping as it stated they would on the website, so I had to foot the bill on that one.

Overall Review: Board is well layed out and should fit anyones needs who wants to run a DDR3 system with SLI. Board came with all the cables I could ever need and now that it's running correctly, I'm very pleased. As with most tech supports now a days, they aren't much fun to deal with. Very friendly, but don't really listen to what you are telling them.

Pros: I am a newbie and I am able to achieve pro-status overclocking with this thing. This thing is amazingly fast!!!!

Overall Review: Get it. Now.

Pros: I had to RMA the first board, would not even post. Once I recieved the second board, and fired it up, with a Rosewill RX-950D, Q6600 CPU, Crucial DDR3 1066 X2, an LG 22X DVD Burner w/lightscribe, and a 260 GTX Video card, this system is like lightning on every application I run.

Cons: The first board was defective right out of the box according to EVGA Tech's.

Overall Review: Newegg helped me with the RMA and it was easy. They even paid for the shipping when I returned it to them. Even though the first board was bad, it all seems somehow worthwhile. One thing I have to say is you have to plug your boot hard drive into the North bridge SATA slots, if you are using SATA, if you plug into the South Bridge it wont boot. This might be common knowledge, but I did not know this.

Pros: This board is amazing. Even though it is not the final version of 790 board from evga (many of you could think it is but there is a newer one coming soon that has ultra chipset and is digital but is not announced yet) it still breaks records. With quad core q9550, mushkin memory (part number 996601), tuniq tower, cosmos s case and many fans (on reasonable level not to make it sound like a plane starting off in a storm) i managed to reach stable 4.0 ghz on cpu (stock 2.83 ghz) with fsb of 1884. My cpu is only at 38 celcius idle and when all 4 cores are stressed it never goes beyond 55 at room temp of 23 celcius. CPU and ram is linked and synced and both are passing all stress tests (mem is 10-10-10-24-2t on 2.0v).

Cons: you didnt buy it yet?

Overall Review: even though there is a never version of this board coming soon dont wait cuz "soon" will be after nehalem comes out and not the first one but the second so we are talking about late december or first quarter of 2009. Then you will only see minor changes in the new board. Ultra chipset is very unstable and not as good as the regular one. Even though it may seem better due to its ability to overclock above 2000 fsb dont fall for it coz it still is bad. Plus dont forget about EVGA step up program! Even if you buy this board and plan on the next model you can step up and make an exchange by only paying the difference in price between them.

Pros: This is the best motherboard I have ever worked with. It has nine SATA ports, very nice for expandability, and very difficult to find. The chipset stays relative cool thanks to the massive heatsink/fan combo over the north and southbridge, and around the CPU socket. Has triple SLI, but you can't fit 3 GTX 280s on this card because the PCI e x16 slots are too close together/card is too big.

Cons: I couldn't install my Zalman 9500A cpu cooler because the heatsinks around the cpu socket got in the way, I'm stuck with a stock cooler for now.

Cons: Hard to fit larger heatsinks. Very testy board when it comes to settings. Takes several tries at changing voltages and other BIOS settings to get it to stay stable. Having problems with drivers

Overall Review: This board took some tweaks to get stable, but seems to be ok now. Still get the C++ runtime error with the drivers of which I have yet to find a working solution. The auto select speed, timings, and voltage for my Patriot Viper RAM were incorrect and had to be changed manually to work. This is definitely a enthusiast's board. Those with little knowledge other than the basics may be better served with another board unless you have some else to help with higher knowlege because you could be stuck with a board you can't keep stable otherwise.