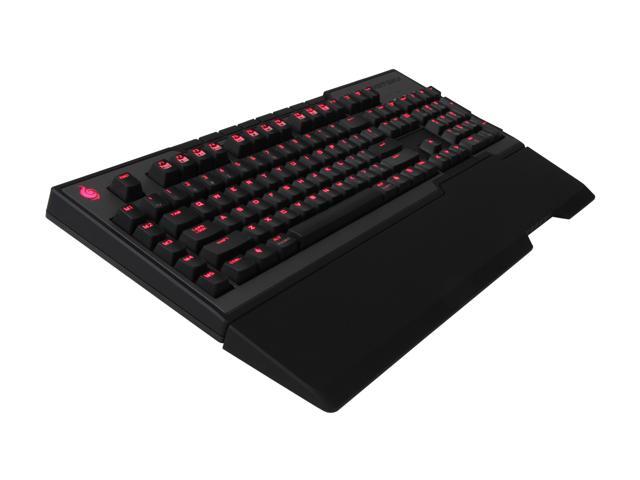 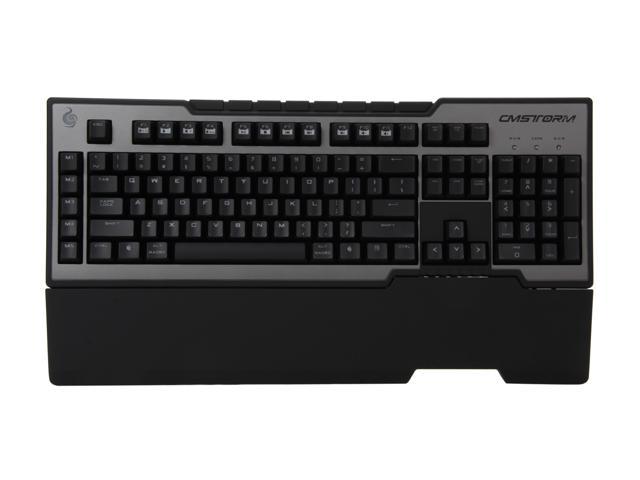 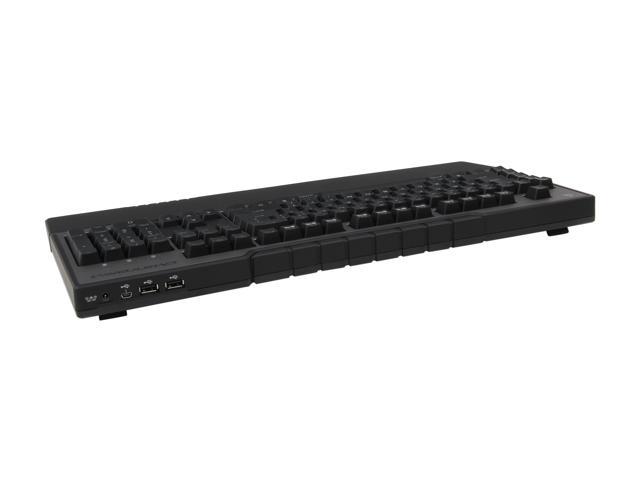 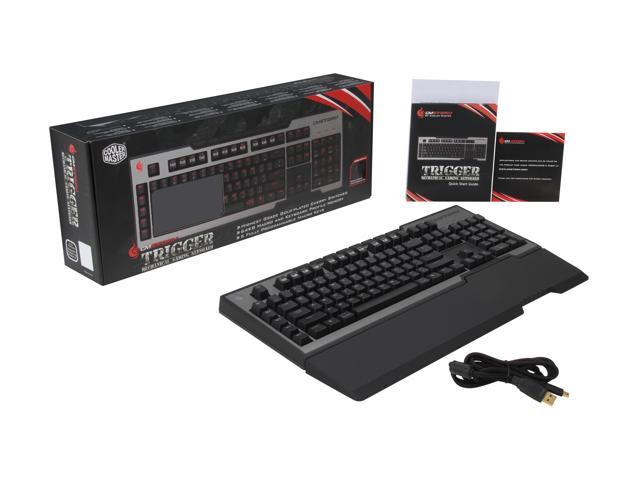 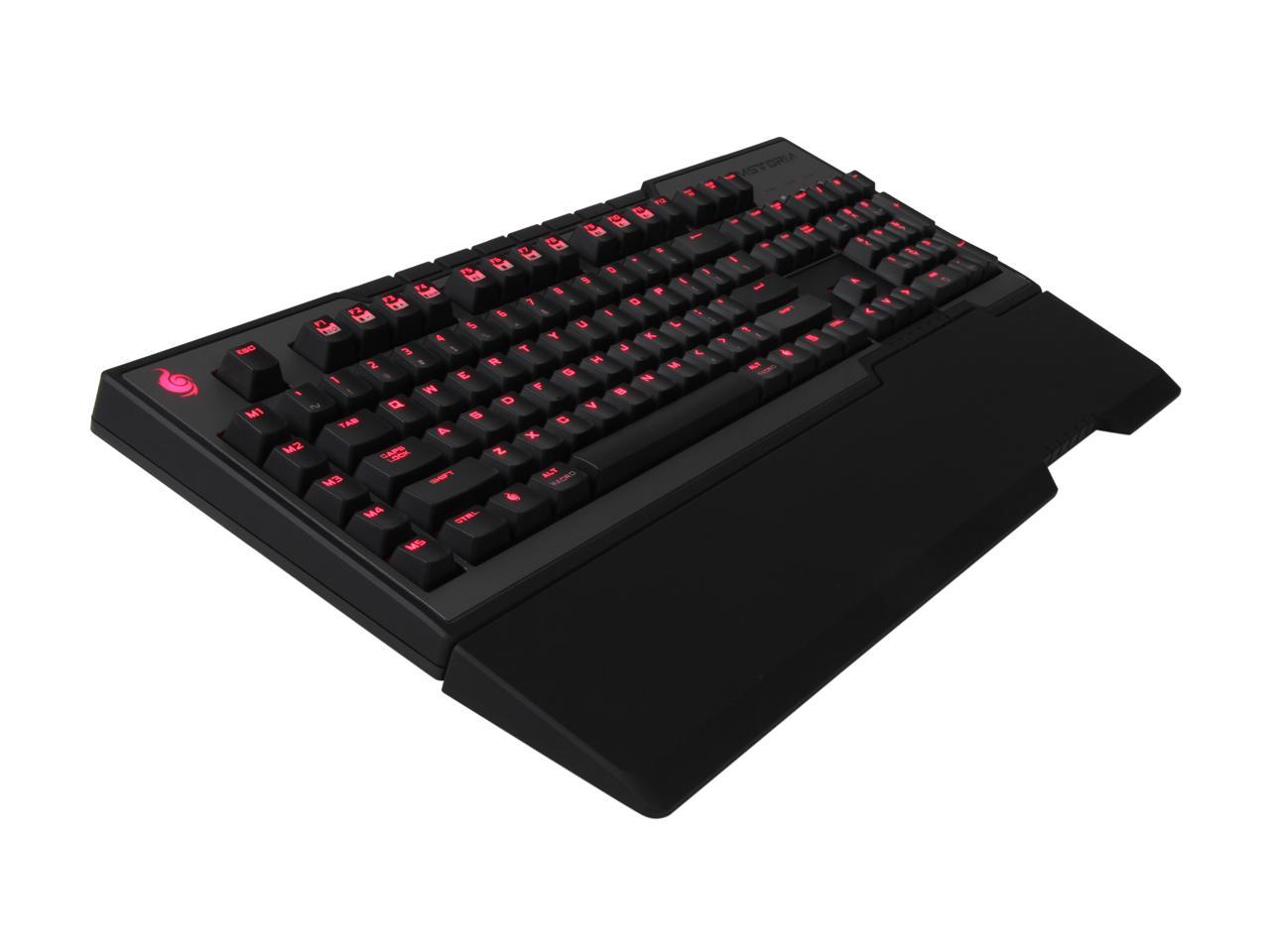 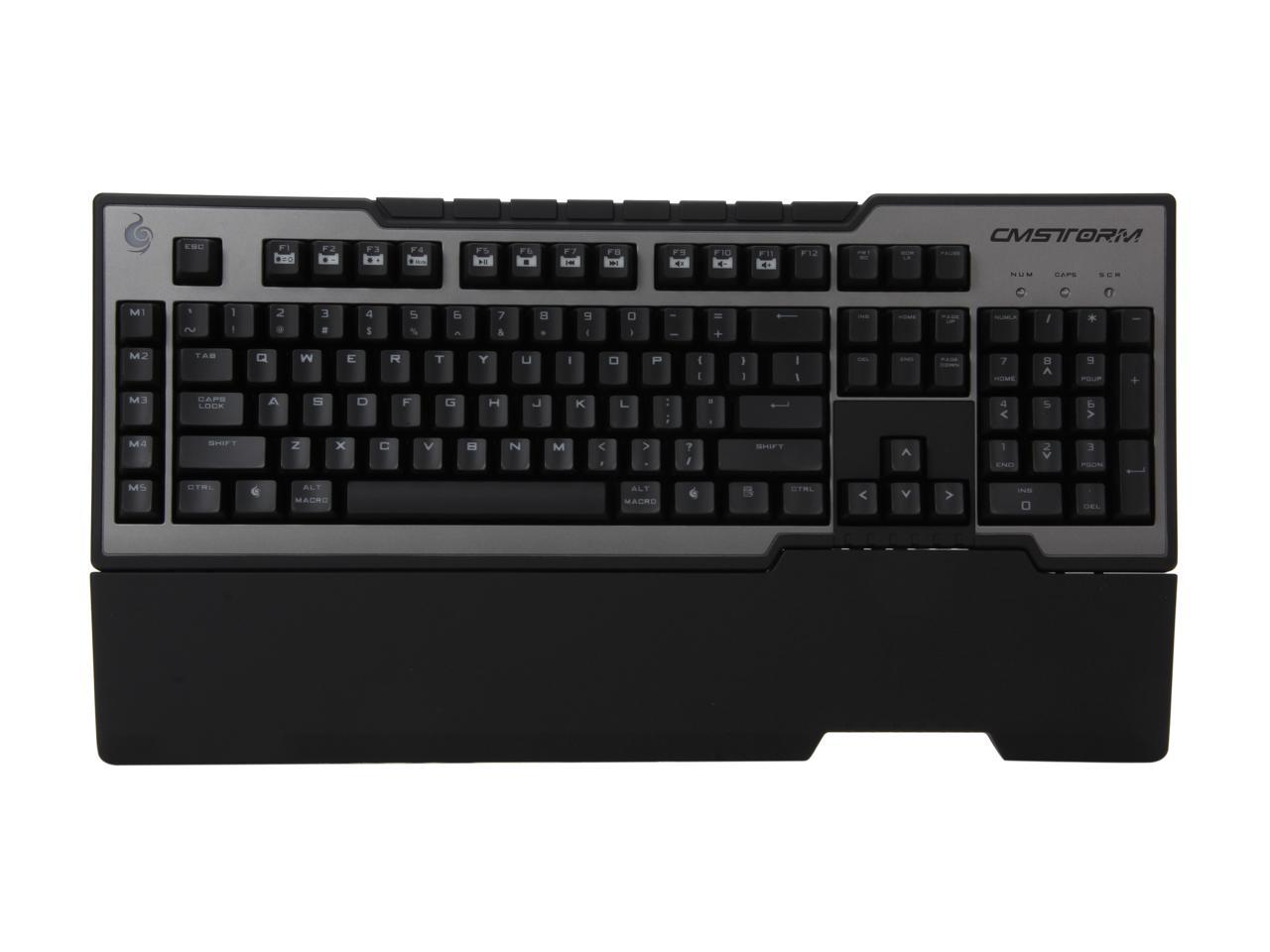 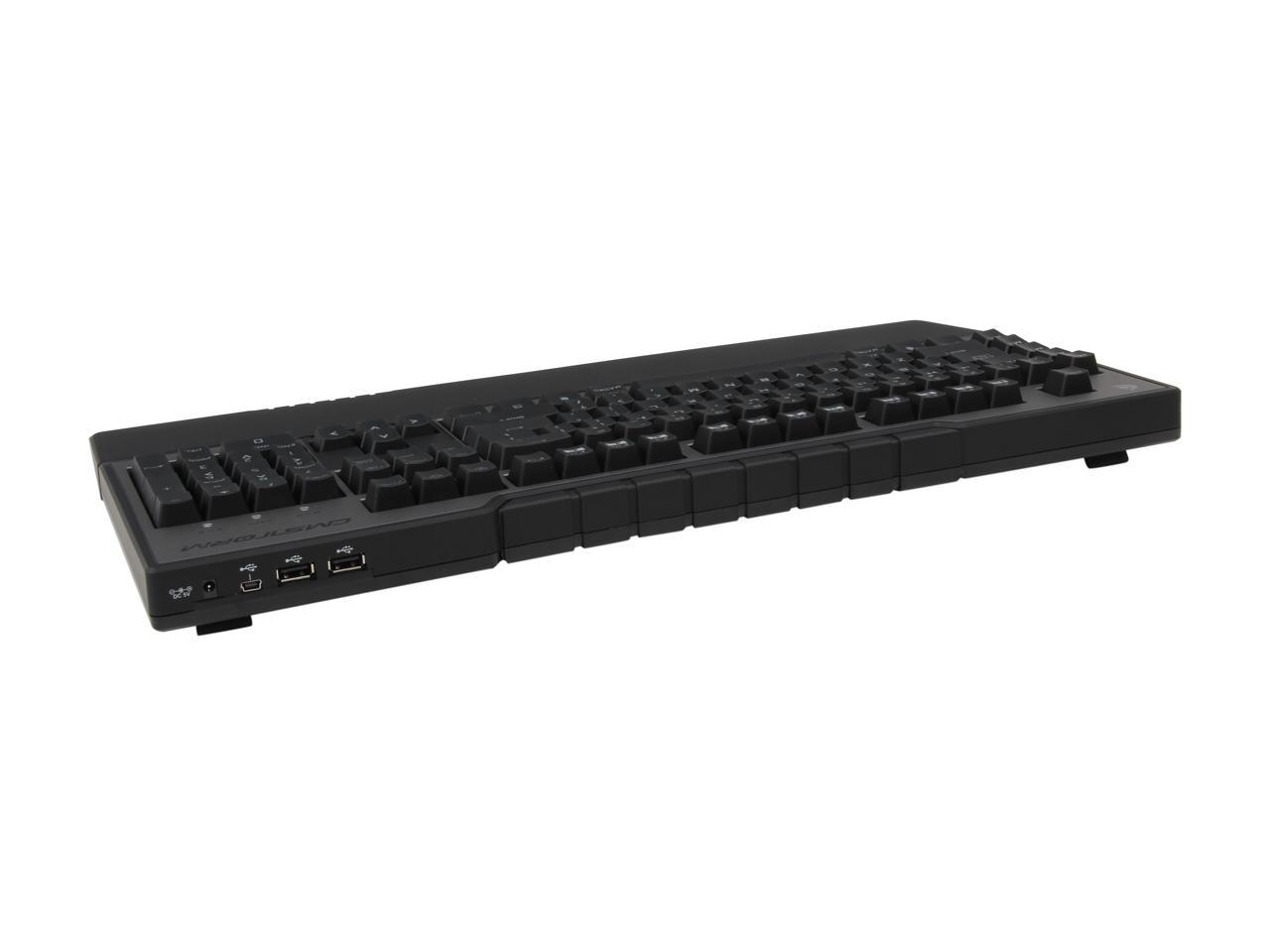 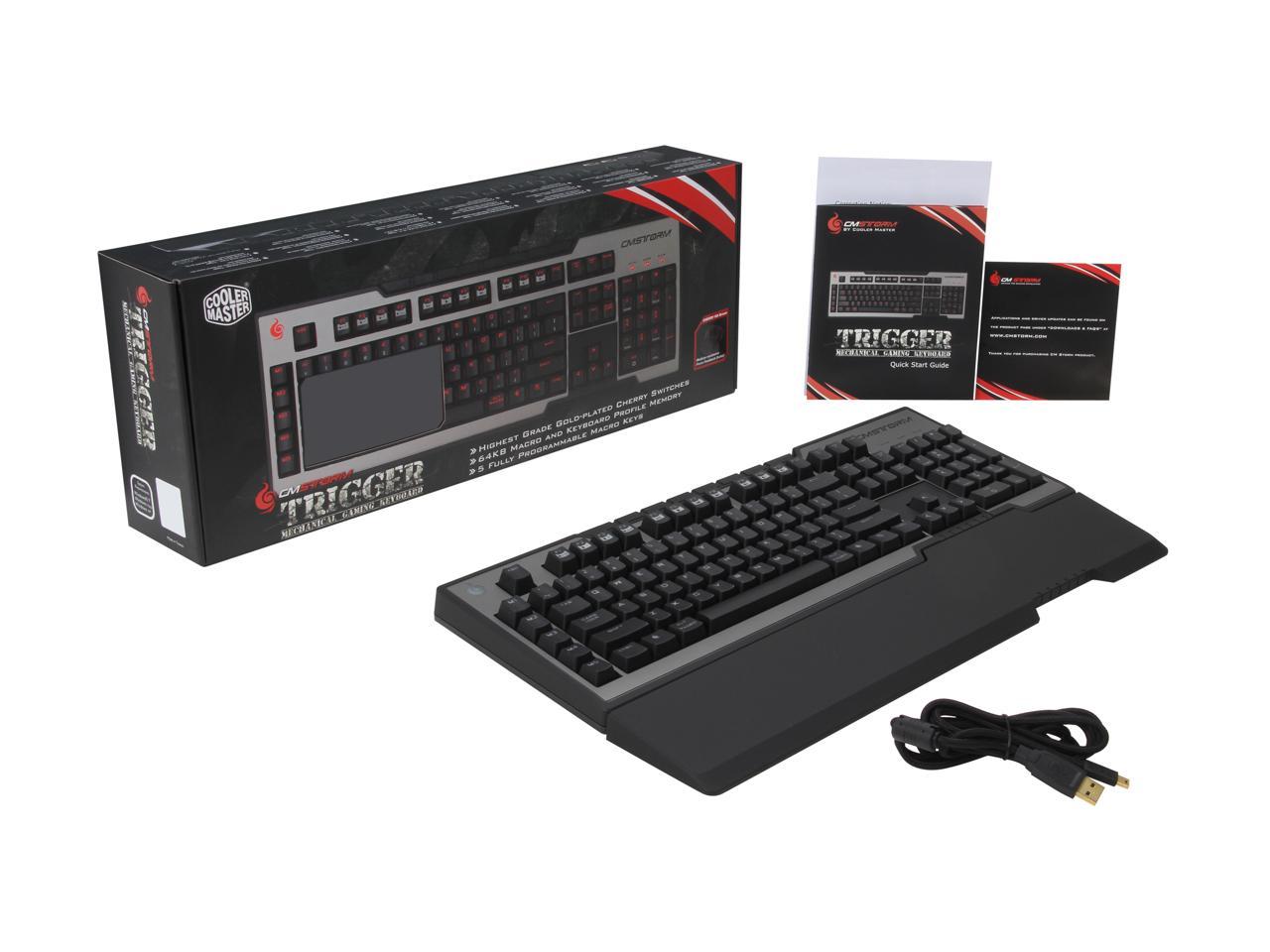 (64) Write a Review
OUT OF STOCK.
Overview
Specs
Reviews

A weapon of choice for hardcore gamers and e-sport professionals, the Cooler Master CM Storm Trigger mechanical gaming keyboard with backlit illumination supplies everything you need to outperform your rivals and dominate the competition. Extremely durable Cherry MX switches deliver a comfortable, smooth feel for every key stroke, while anti-ghosting 6-keys rollover, five programmable macro keys and button reassignment enable you to breeze through complicated operation. Store your personal profiles on the 64KB onboard memory and easily recall them when switching to another computer. No more worry about accidently pressing the Window key! Just disable it and enjoy interrupt-free gaming. Also enjoy enhanced media playback with the 2-port USB hub and multimedia keys.

Pros: Cherry MX Rubber O-Ring Switch Dampeners were used with great success. I solved the problem with the loud spacebar. All switches are quieter than my old MS ergo was. I used the 40A-R style

Cons: No AC adapter. No mention of which one is needed. I found out a 5VDC with 800ma is required. It takes a coaxial plug size H

Pros: The key feel. The literature calls them "Super Grip Keycaps". I can best describe them as having a thinned out version of the rubber coating that covers the rest of the keyboards body. They don't feel plasticy or slick. But they're not too grippy either. About 25% as grippy as the bodys coating. The best feel of a keyboard I've experienced. Very robust, For a keyboard it's quite heavy. Non-slip feet really hold their ground. Nice, easy to read font on keys. Cherry MX Browns are reasonably quiet, unless you pound on them. Rubberized surface around the sides and top surface. Both the black and grey areas are rubberized. Everything is except for its base underneath. It seems to be the same rubber coating that is commonly used on cell phones. Easy to use software. On-The-Fly Macro Recording, Assign macros without leaving the game. 2 USB ports on the back. The utilitarian, militaristic, no nonsense look of this thing. I like that look.

Cons: No CD software supplied. I don't really need it, Just go to their website for the drivers. No AC adaptor supplied. The spacebar is loud. It sounds completely different than the other keys. I will be looking to remedy that issue. The red LEDs illuminate the top half of the keys only. Not a huge issue since the letters are at the top of the keys.

Overall Review: I had to replace a wireless keyboard {somethingsoft} that was not compatible with my motherboards {AS?S} UEFI BIOS. It would cause the mouse cursor to uncontrollably drift. My BIOS was useless like that. I had to get a replacement. I spent a lot of time researching and this fit my requirements, (red illumination, mechanical, cherry MX switches, programmable). There were several others that were candidates but this fit the bill good on paper and best on looks. This was clearly designed to compliment the popular HAF series cases but it looks great with my Storm Enforcer as well. Cooler Master doesn't have a long history building keyboards so part of my decision was on faith due to the quality of their other products. I caught myself thinking how much I'd love to take it apart, just to see what makes it so heavy. I would recommend this keyboard in a heartbeat.

Cons: -Weight. The keyboard is rather heavy -Noise. Although Cherry MX Browns are quiet by design, they still are mechanical and produce noise. -Tactile Feedback. Although this isnt a issue for some, others may be turned off by only needing half the key actuated to activate the key. -DC Adapter NOT included (CM doesnt even make the adapter, but rather recommends a different one)

Overall Review: So after my anansi getting zapped due to a misplaced glass of water, and its replacement (A K90) arriving DOA, I figured I would go with something new, and picked up this guy. The first thing I noticed was they used Cherry Brown keys. Now I never had heard of browns (I know Black Widow uses Blues, while K60/90 use Cherry Reds), I figured "This keyboard has good reviews and CM makes several keyboard using these keys, so lets try it!" The Cherry Browns by definition are "Tactile, Non-Clicky 55g Actuation force". In english, these keys dont make noise and dont require the key to bottom out to activate. Furthermore, they require a little more force to actuate than Blues or Reds, but still are more sensitive than most other mechanical, and in my experience, Membrane keys. The keys are indeed backlit, and what previous reviewers said about the key only being partially lit are indeed true. This is due to the design of the Cherry Switches, and are a design issue on their behalf and not CM. Since it wasnt CM's fault (and if you notice, Corsair and Razer also move their keys up to where the LED should be so they light up), I dont feel its necessary to make it a con. The keyboard is HEAVY. By far the heaviest peripheral I ever had. Combined with its rubberized coating, the keyboard feels very rugged and durable. Short of smacking it with a hammer, Id say its a great keyboard. at 110, or even 120, the keyboard is easily worth it. If you can get it for under 110, I'd say pounce on it because this is easily the best I ever had. But bear in mind; CM DOES make this model with 4 different types of switches! So make sure you get the ones you like.

Pros: -Great tactile feel -Media keys on a Mechanical Keyboard - something that i absolutely needed and are hard to find. They work great. -Programmable Windows key, macros, and keyboard profiles -backlit keys with 3 modes and brightness adjustment -Hand rest gets the job done

Overall Review: This is my first mechanical keyboard so I have little expertise on the subject, but it's exactly what I had hoped for - the sound, the feeling, the response of the keys. I'm very happy with the product.

Pros: So I've had this keyboard now for 4 months, you can find my earlier review back on 10/03/2012 (I forgot to throw my name on it) The keys are holding up very well, no noticeable wear on heavy use keys (WASD, etc), the caps arent fading, nor much wear on the caps (in other words, still that nice rubberized finish) The removable usb cable isnt nearly as much of a problem as I initially thought it would be, it seats relatively tight in there, so moving the keyboard wont unplug it. I happened ot have a USB cable that would fit in the AC adapter plug for the keyboard. Now the keyboard specifications state that it takes in roughly 5v @ 1.0a DC. That happens to also happens to be the specification for USB. So the option is there, should anyone need it. All the LEDs are still working

Cons: The keyboard, as mentioned prior, did NOT come with a AC Adapter for its features. CM STILL does not make the Adapter, but recommends any AC to DC adapter that puts out 5v @ 750mAh to 1000mAh. A USB to the appropriate size plug will work too. The Keyboard also has a "Bootup" time. Infact, since upgrading to a SSD, I had to put a HDD delay on POST so that I have a chance to actually enter BIOS. Macro length is limited to 75 characters. For most ,this is enough, but for some, it may be a issue. Software is touchy, it likes to reset the keyboard sometimes, other times if the keyboard gets reconnected, it likes to crash (the software)

Overall Review: 4 months later and this keyboard is easily my favorite peripheral. The keyboard still feels great, and not to mention has shown absolutely no signs of wear and tear. The software is really disappointing for such a great piece of hardware. Even after downloading the newest revision, the software is still lacking. I've already used this keyboard on the go (thanks to the removable usb cord, its a snap to swap it between pcs), and even dropped it from 5 feet onto concrete. the bottom is a little scuffed (expected), but no keys fell out and it even worked right away on my laptop like it was never dropped. For 110 to 120, this still is a great option out there. And I would have no qualms whatsoever buying a new one or buying one for a friend. Sure, Blackwidow has throughput audio and cherry blues, or Corsair K90 has cherry reds and 18 macro buttons, but for the average user and the casual gamer, or even the hardcore gamer, the Trigger will not disappoint*. *I wont say nothin bout the software.

Pros: I bought this keyboard somehwere else ;), so that's why there's no verified ownership. But thought I should put a review on here to help others make an informed decision. This is excellent gaming keyboard, very smooth typing and feels a lot better playing games with it too. Not very loud at all when typing which is a plus, brown switches are the best overall keyboards for typing and gaming which simply can't be beaten imo. The palm rest is very comfortable and a must for those long gaming sessions; I always have to have a palm rest on my keyboards. The keyboard build quality really shows as you take it out of the box, it feels durable and made out of high quality materials. Highly recommend this keyboard for any gamer looking for a new keyboard.

Cons: Only con I have is the software could have been a little bit more user-friendly, it took me a little bit to figure out how to save your macros to a profile.

Cons: the software application needs improvement, but nothing to knock an egg for.

Overall Review: I want to point out that this is an amazing product, I got it when I realized the Razer Black widow ultimate didnt have the shift functions illuminated, very important since I am a programmer and avid gamer. Maybe some others got a bad one off the line , but I can see the shift functions illuminated even during the daytime. the texture of the keys feels nice, and I will add the FPS lighting mode made it very simple in teaching my girlfriend how to play BF3. if you want the best price/performance for a mechanical keyboard with macros, this is what you need!!!! the red looks beautiful too!

Cons: No backlight on "shift" functions. For example 1 is nice and red, but ! isn't. You can't even see ! in the dark at all. I'm not loving the macro keys. I tend to shift my left hand over too far when I start typing because I'm used to the regular keys being right at the edge. This is also magnified because the caps lock key doesn't have a little indention. It also makes it harder to use your palm to hold while your fingers are on the numbers or top row for gaming. About once a day the lights on the keyboard just shut off and the keyboard stops responding. I have to pull and replace the mini usb connector from the back of the keyboard to get it working. Then it takes about 30 seconds to start responding again.

Overall Review: It took a bit of searching, but you can make the left "storm key" work as a winkey. The right storm key cannot be remapped.