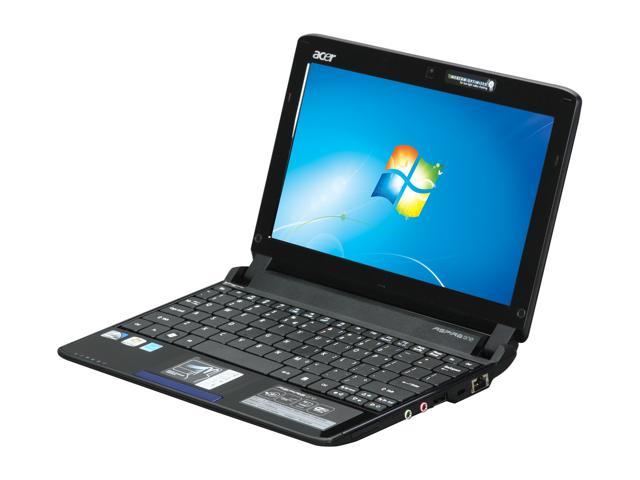 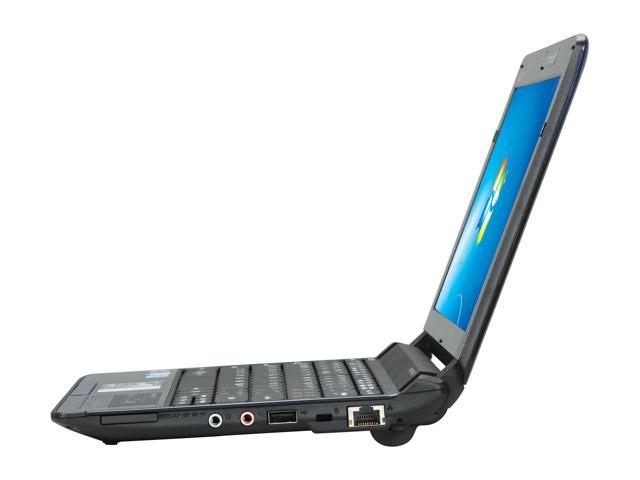 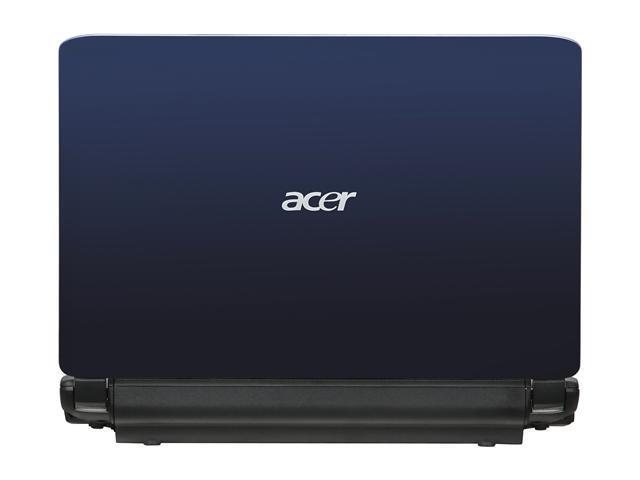 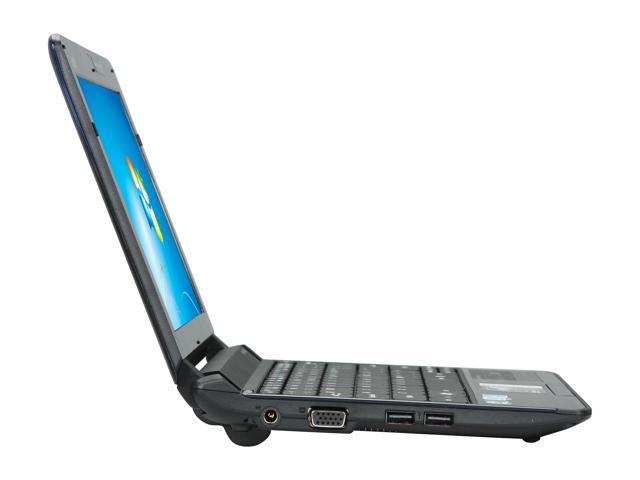 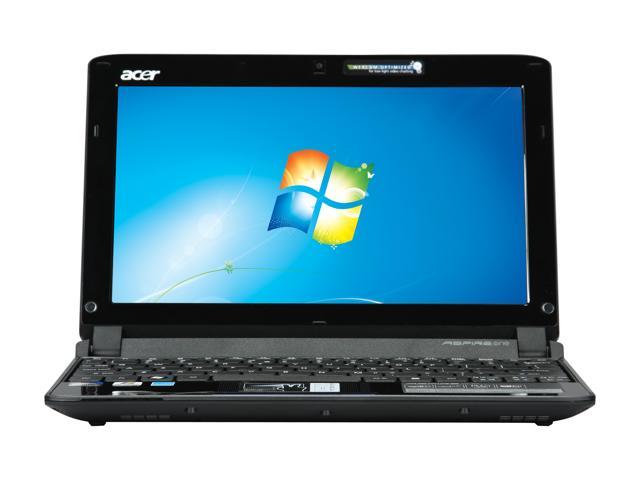 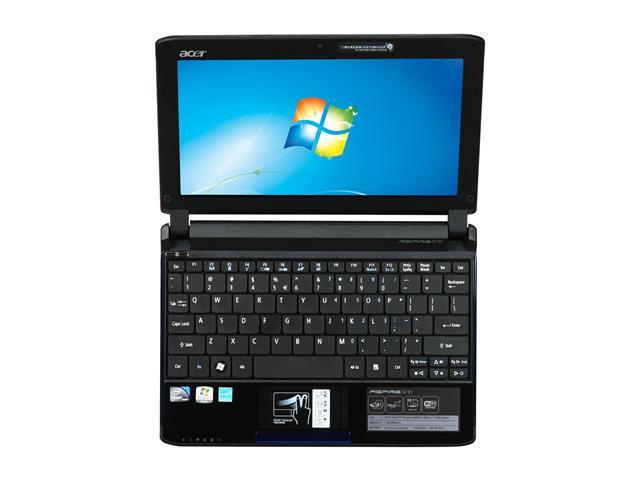 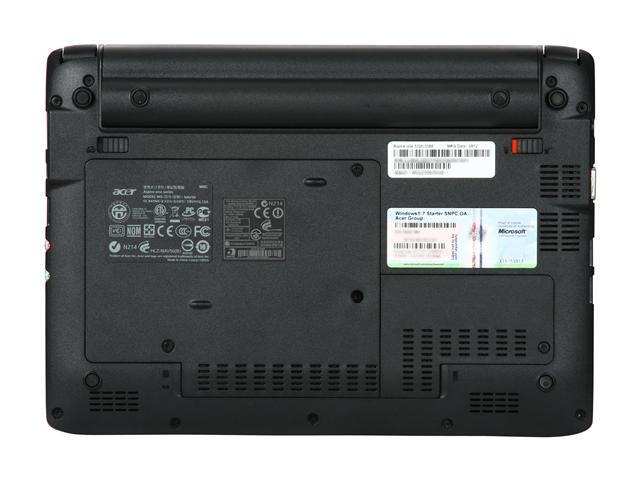 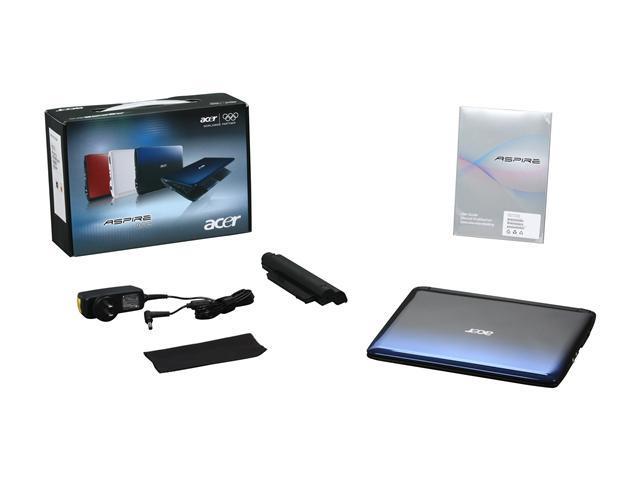 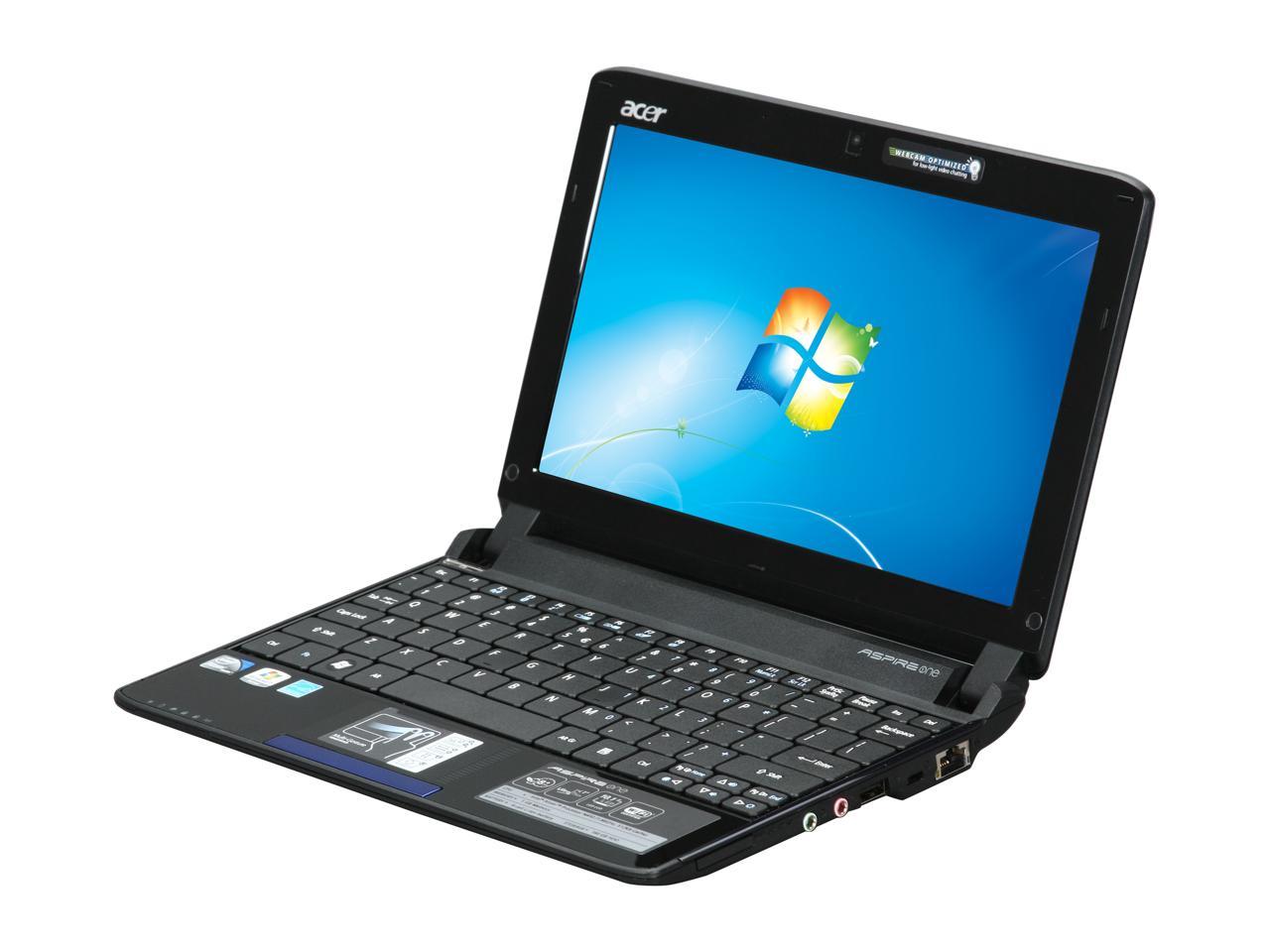 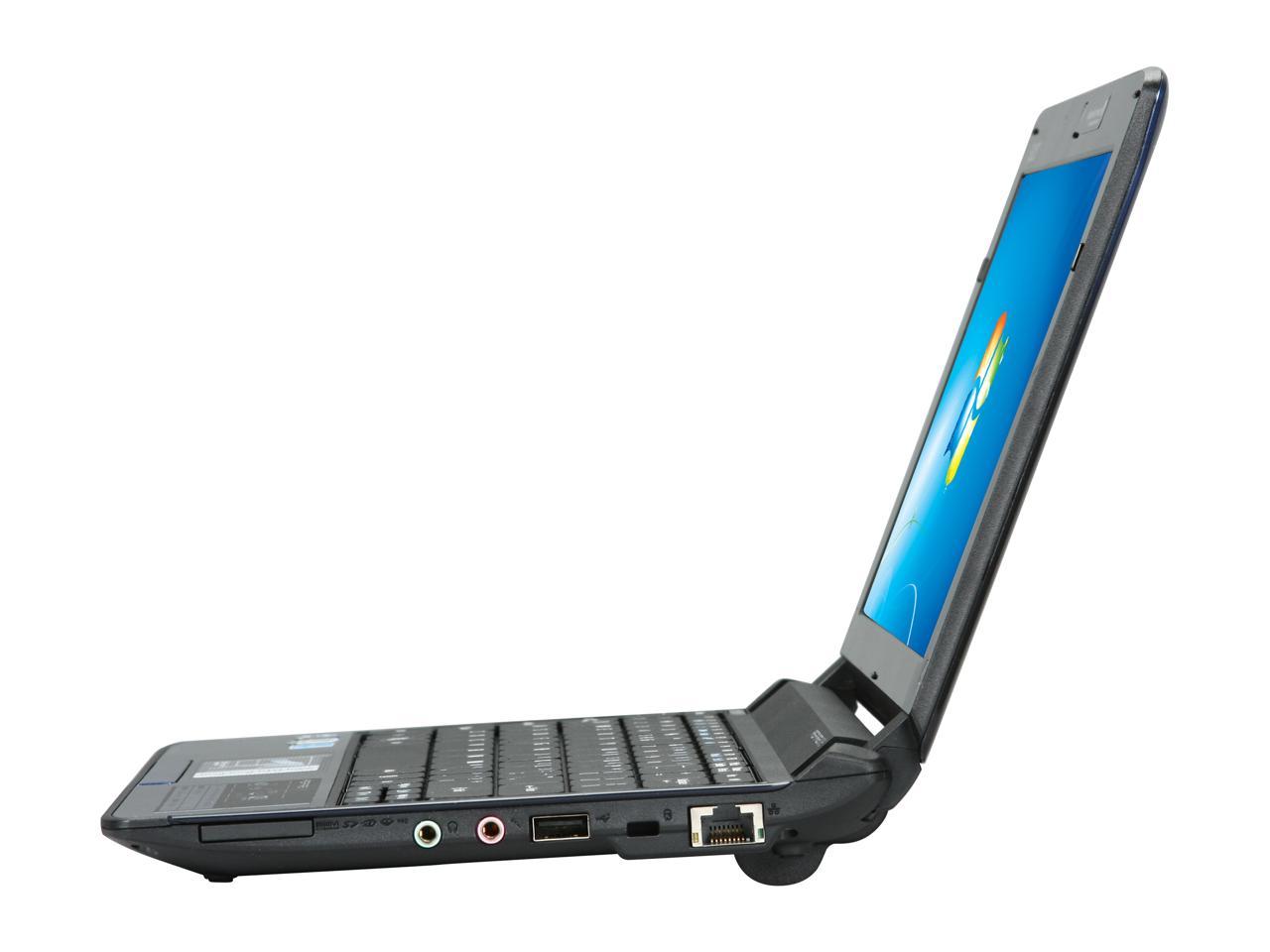 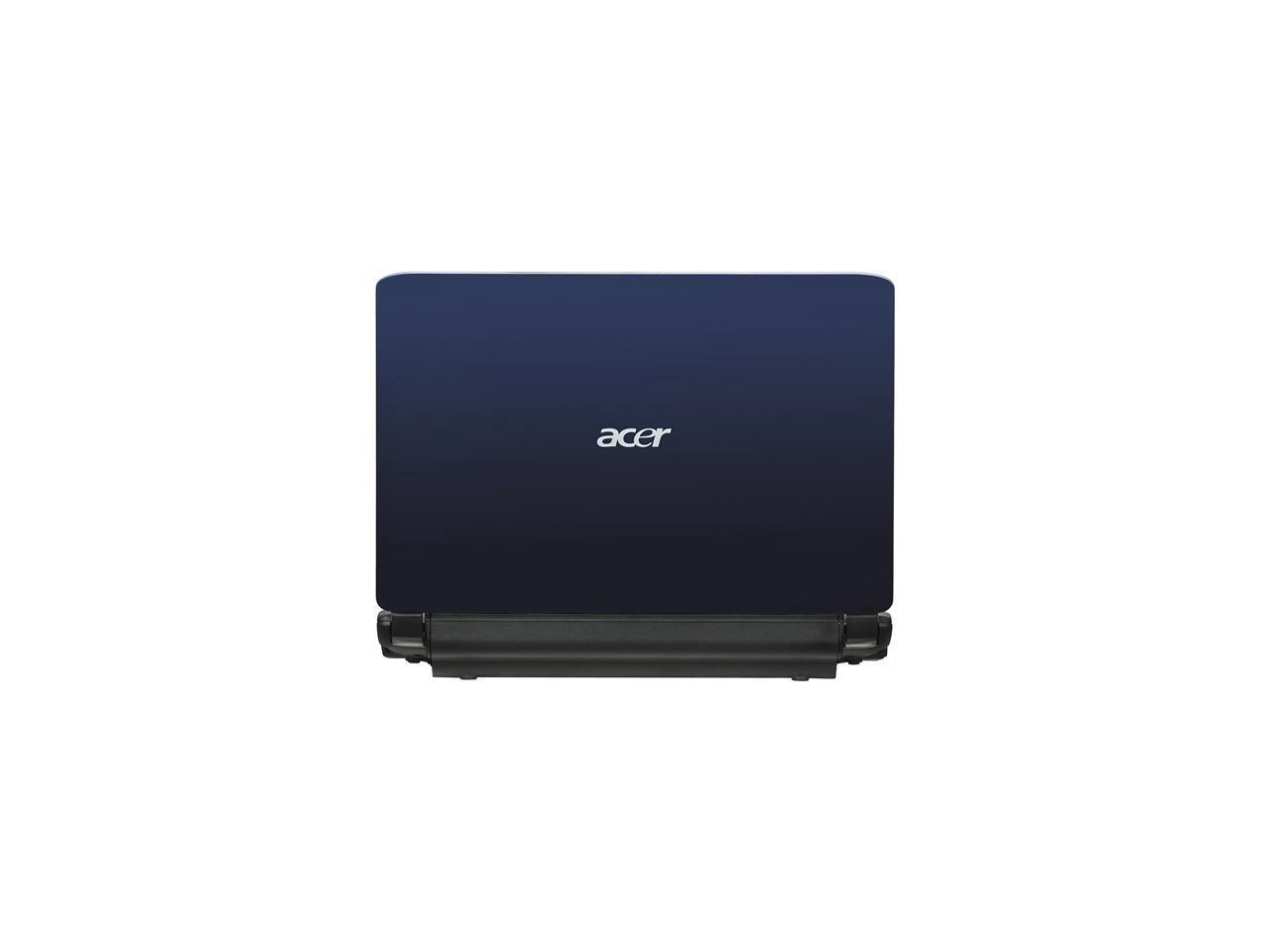 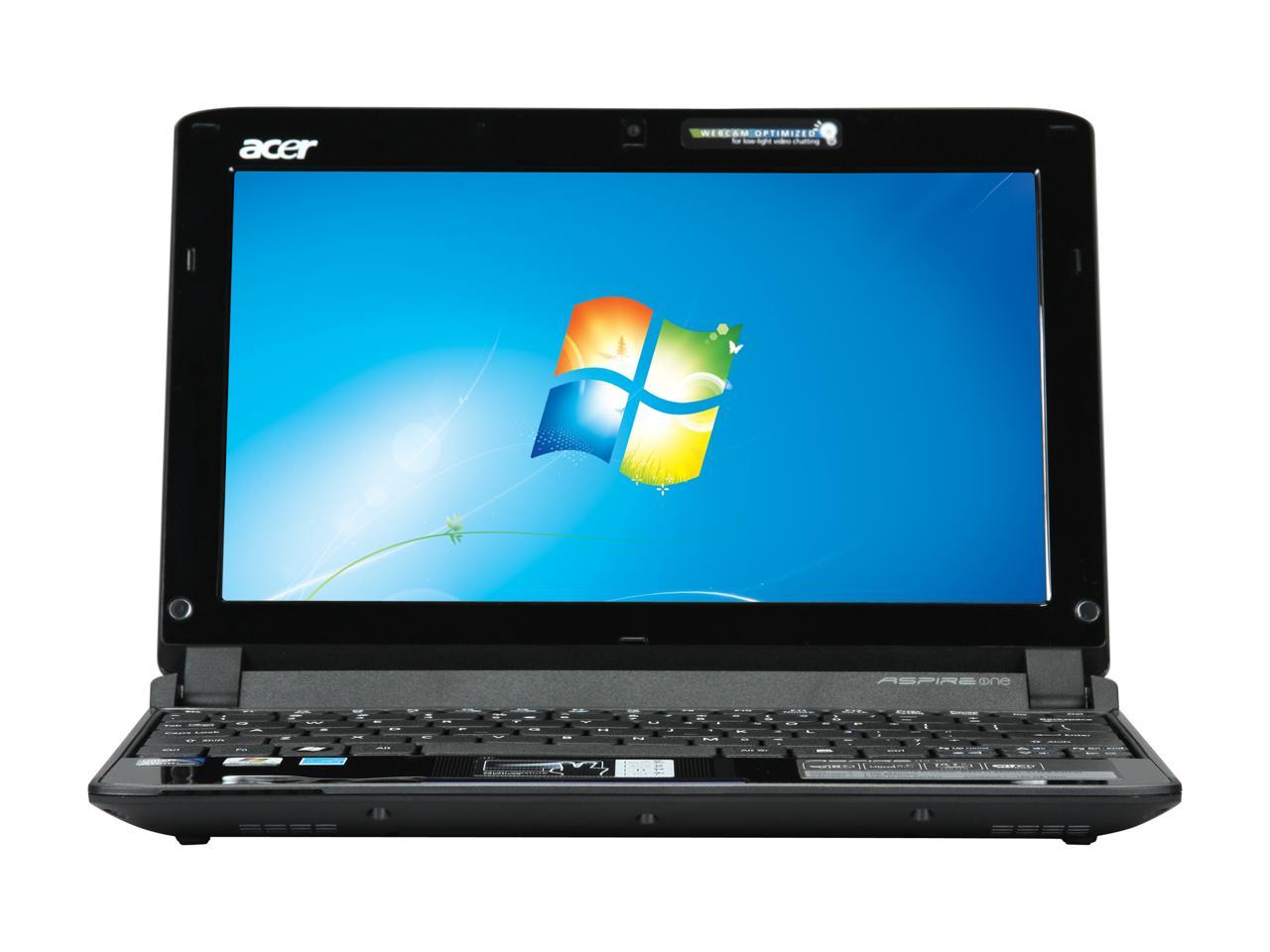 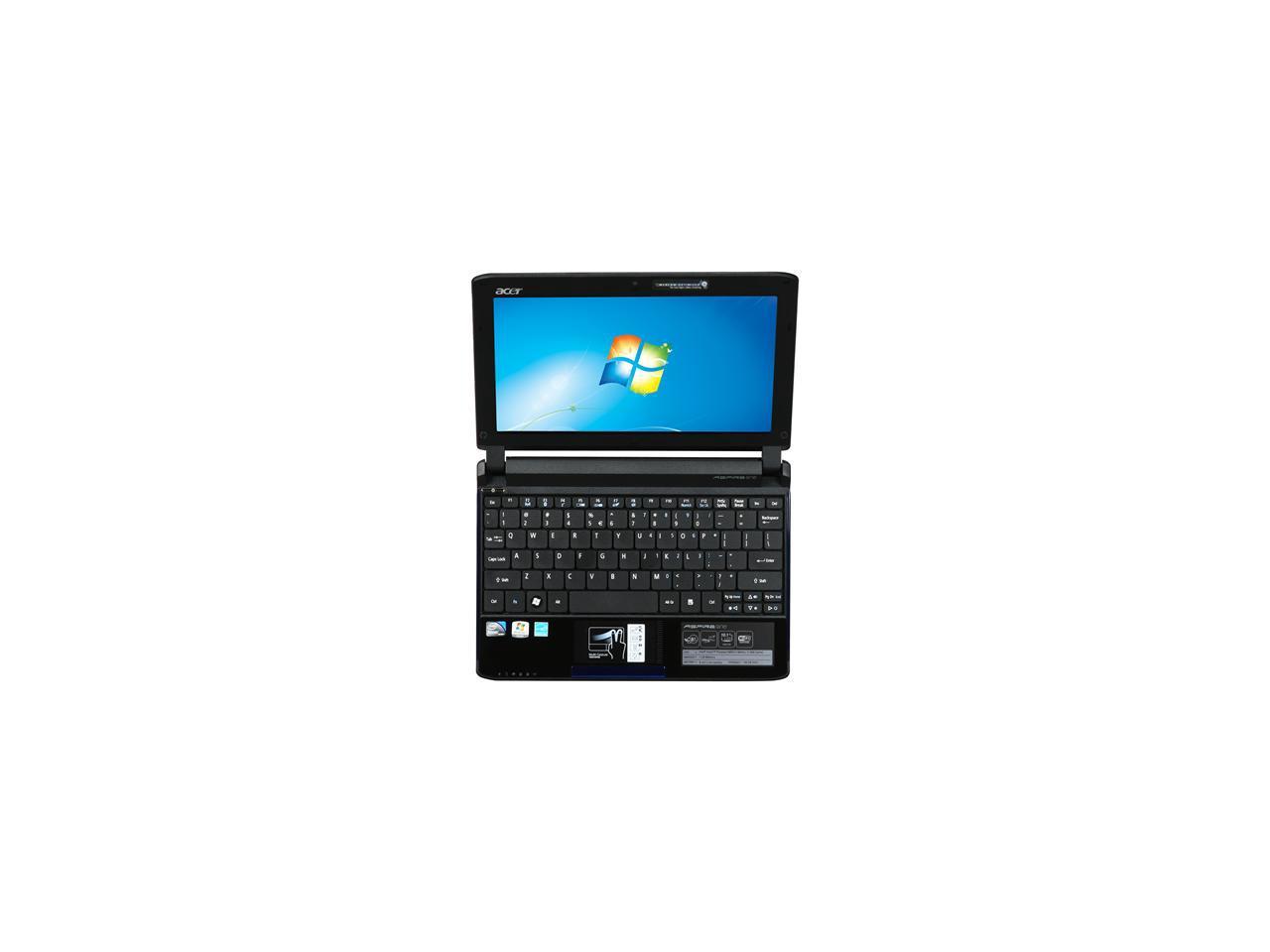 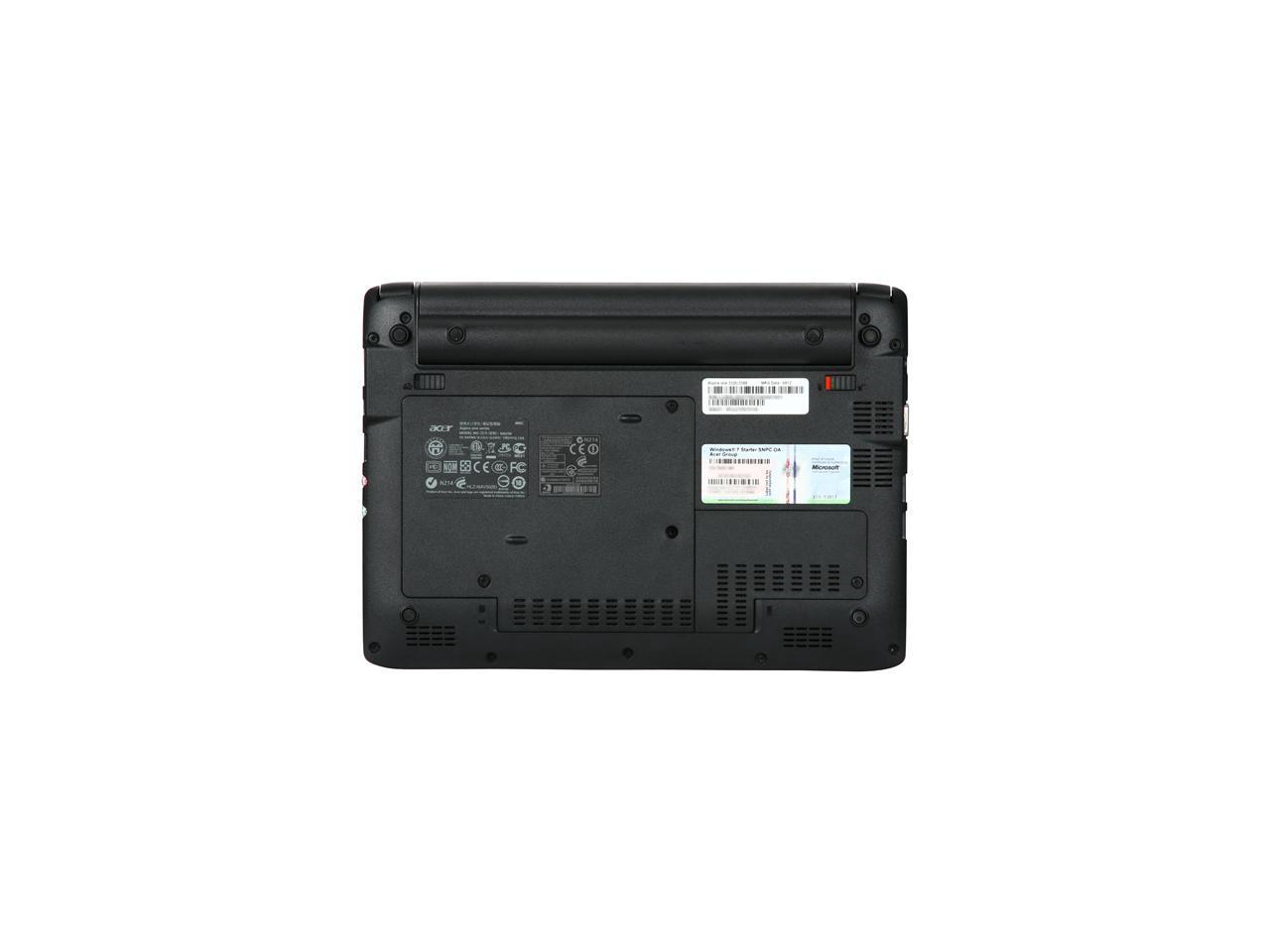 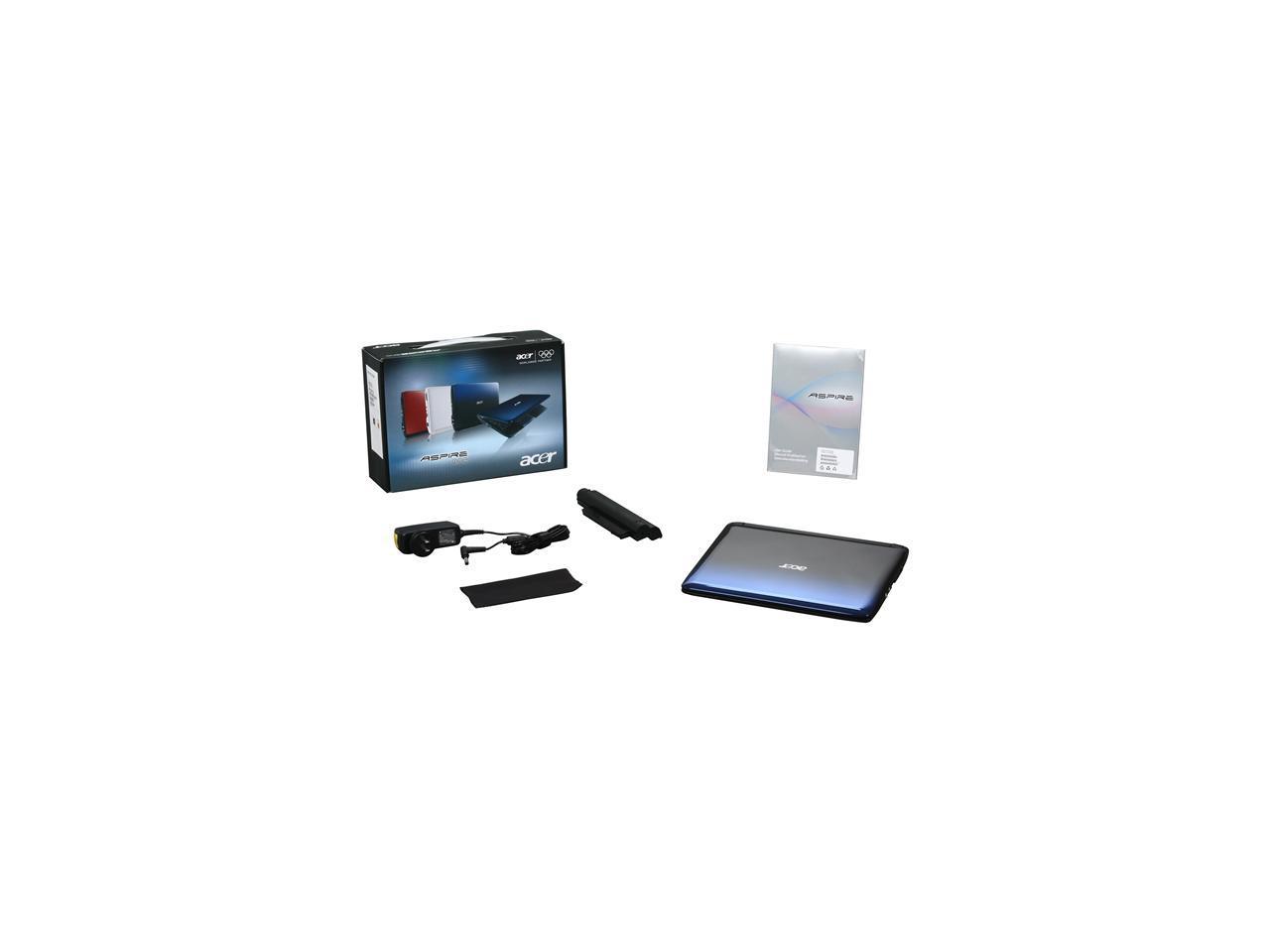 (45) Write a Review
OUT OF STOCK.
LOADING...
Specs
Reviews

Pros: Writing this post from my new Acer netbook. First thing I did was upgrade to 2GB memory, bought here from NewEgg. Then connected an external DVD drive and loaded Win7 Ultimate w/ Office, Opera, AVG Anti-virus, and a few other things (e.g., silverlight for Netflix). Partitioned the HDD in half to make room for my Linux (Kubuntu 10.04 full version) install. Kubuntu (currently using to write this post) worked flawlessly out of the box w/ wireless (WPA2), Opera, Skype 2.1 (webcam works well in linux w/out any special configuration), VLC, etc. I can SSH to all my resources, watch flash videos in my browser, and check email while chatting on Skype. Awesome. LED screen is nice. Light weight and not too hot while running.

Cons: Mouse pad doesn't work in Linux as well as it does in Win (can't use its scroll bar). F2 button to disable wireless doesn't work out of the box w/ Linux, and when I loaded Win7 Ult on it the F2 button also stopped working (can still disable via software). A little heavier and a little hotter than I expected but not excessive. Battery life of 8hrs achievable only if in aggressive power save settings with dim screen.

Overall Review: All in all very satisfied w/ purchase. A good 3 hours of battery life in high performance mode w/ 5hrs in power save and moderately bright screen. Can offload a lot of routine daily stuff to this box without having to run my tower (just shut it off for the first time in months). Don't need to mess around w/ my clunky laptop either. Great buy!

Pros: This netbook far exceeded my expectations. I've run word 2007, access 2007, excel 2007, firefox streaming Hulu, all while copying the games you'll find below over wifi. I've played Diablo II (can get a little skippy in crowded areas, but is still very playable), Warcraft III (on medium it pulls 30fps, on low it is impeccable), World of Warcraft (all low settings, playable in all areas except the obvious Dalaran), Nox, Starcraft, and others I can't even remember. Considering I didn't even buy this for gaming, I'm amazed.

Cons: The case is a fingerprint magnet. I can't stress this enough.

Overall Review: I'm still using 1gb of ram and Windows 7 starter. I ordered a 2gb Patriot stick but it arrived DoA. The Office Suite counts as one application on Win7 starter, so you can open as many office apps as you want. Also, any type of file actions aren't considered applications at all.

Pros: Small - obvious Battery will last maybe 5-6 hours My wife loves it as we have 3 small boys and she can use it in between the chaos. wireless connects easy

Cons: win7 starter is like being on training wheels. Finger Print Magnet - only issue for neat freaks. - cleans easily gets warm while charging but I am talking like s small warm feeling from the bottom not scorching hot

Overall Review: Good buy all around would recommend getting the (1) 2 GB memory stick upgrade but not an issue for general users. I was able to watch streams off NBC.com without an issue. After upgrading to 2 GB can tell a difference but still good netbook without. Remember this is a netbook and not a gaming PC and you'll be happy.

Pros: Quick, nearly full size keys, great ribbing on touch pad for scrolling. 3 USB ports, card reader and webcam. We got this for remote communication and video conferencing. Love it, and it fits in my purse!

Pros: I bought this specifically for travel because of its size and battery life. The small size and light weight makes it easy to take anywhere. It had no problems connecting to my wireless setup.

Cons: None really. Finger prints don't bother me like the others. The Windows 7 Starter is actually okay, but I upgraded to Premium (easy!) because I wanted full functionality.

Overall Review: I upgraded the memory to 2 gigs. As others have mentioned, it's great for Netflix and Hulu. The memory I bought (from Newegg) is the Crucial 2GB 200-Pin DDR2 SO-DIMM DDR2 667 (PC2 5300) Laptop Memory Model CT25664AC667. It's easy to install, and was instantly recognized. Took less than 5 minutes to remove one screw, pop the cover and replace the memory.

Pros: I like the glossy finish of the screen. The lcd offers good viewing from most angles. I also like the gradient paint finish of the outside shell. The keyboard is a good size and very solid. The hard disk is almost completely silent. The speakers are up to par for something this size. Wireless hasn't dropped my connection yet and produces the 20+mbps I would expect from my 802.11g network. The Intel gma3150 video card can handle Windows Aero and simple games. I was using it as a NES emulator the other night. I used the vga d-sub 15 output to play on the TV in the living room. We spent a good six hours playing Mike Tyson's Punch Out. Nintendo never looked this good, very crisp output. The six cell battery gives me about six hours battery life, which I think is fantastic. The computer is very light even with the battery loaded. The n450 processor is a very capable powerhouse and I love that it has hyper-threading. Even with just 1 gig of ram, I still haven't run into any problems.

Cons: The software they throw on these netbooks is a joke. I would recommend the first thing you do with this netbook is to format it and put an operating system on here that hasn't been crippled by Microsoft. I currently have Windows 7 Ultimate on it and it runs great. Can get kind of hot when I start throwing some real work at it. Does stay pretty cool when I am just web browsing or watching a low def video. The fan can get pretty loud under load and runs most of the time. The touchpad required a little software tweaking to get it just right.

Overall Review: Don't expect this netbook to accept everything you throw at it. In this market niche you have to sacrifice some things to gain in others. I personally love it. I would have happily paid more for a product of this quality. Accept the fact that you have fingers and those fingers produce prints and some of those prints might end up on the netbook, your only human.

Pros: Light, cool, and everything that I needed in a netbook. Keyboard is a decent size, and it was put together very, very well.

Cons: Kind of a silly Con, but I am kind of bummed that its very glossy on the outside. Finger prints show up, but its not a crisis.