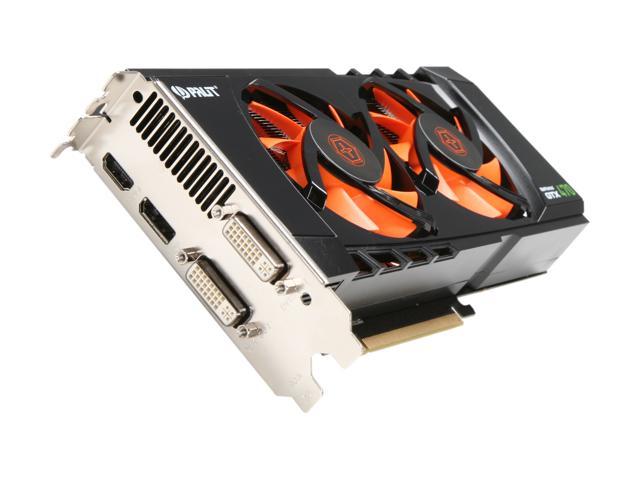 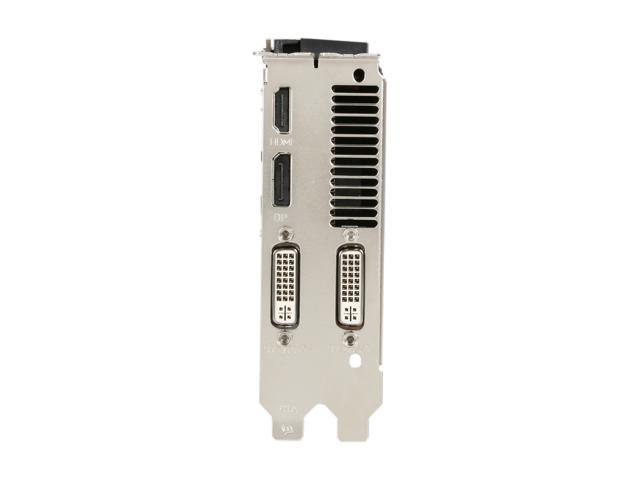 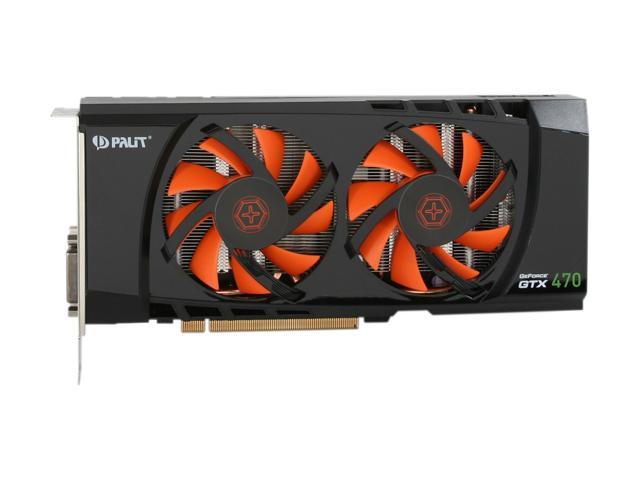 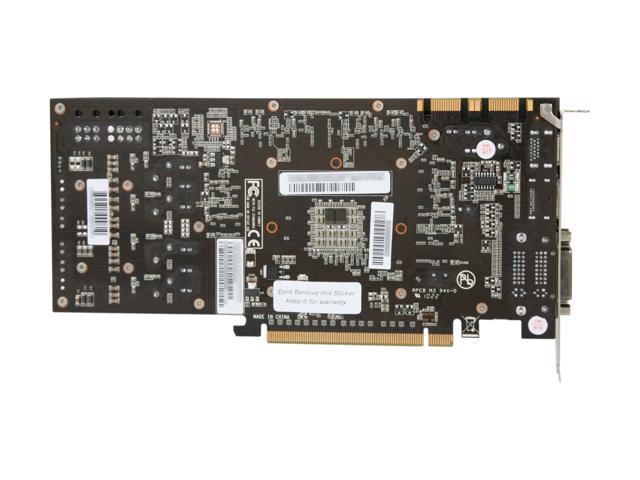 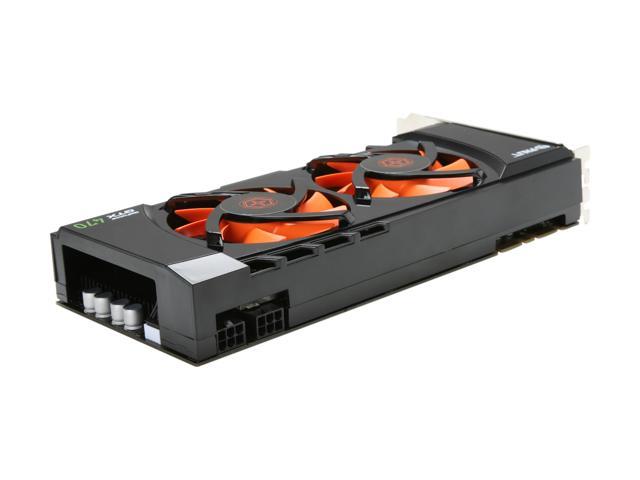 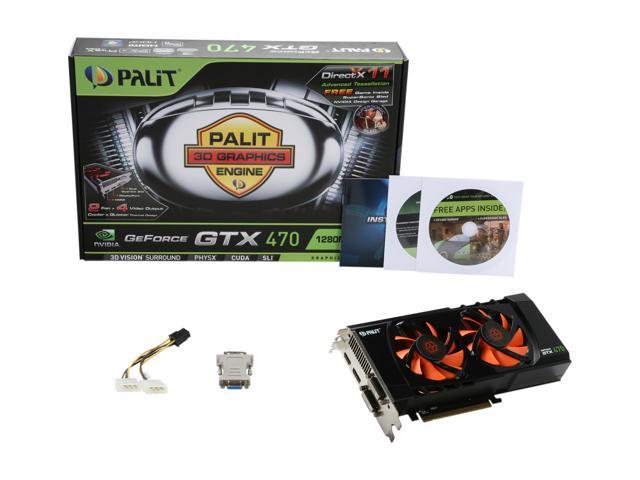 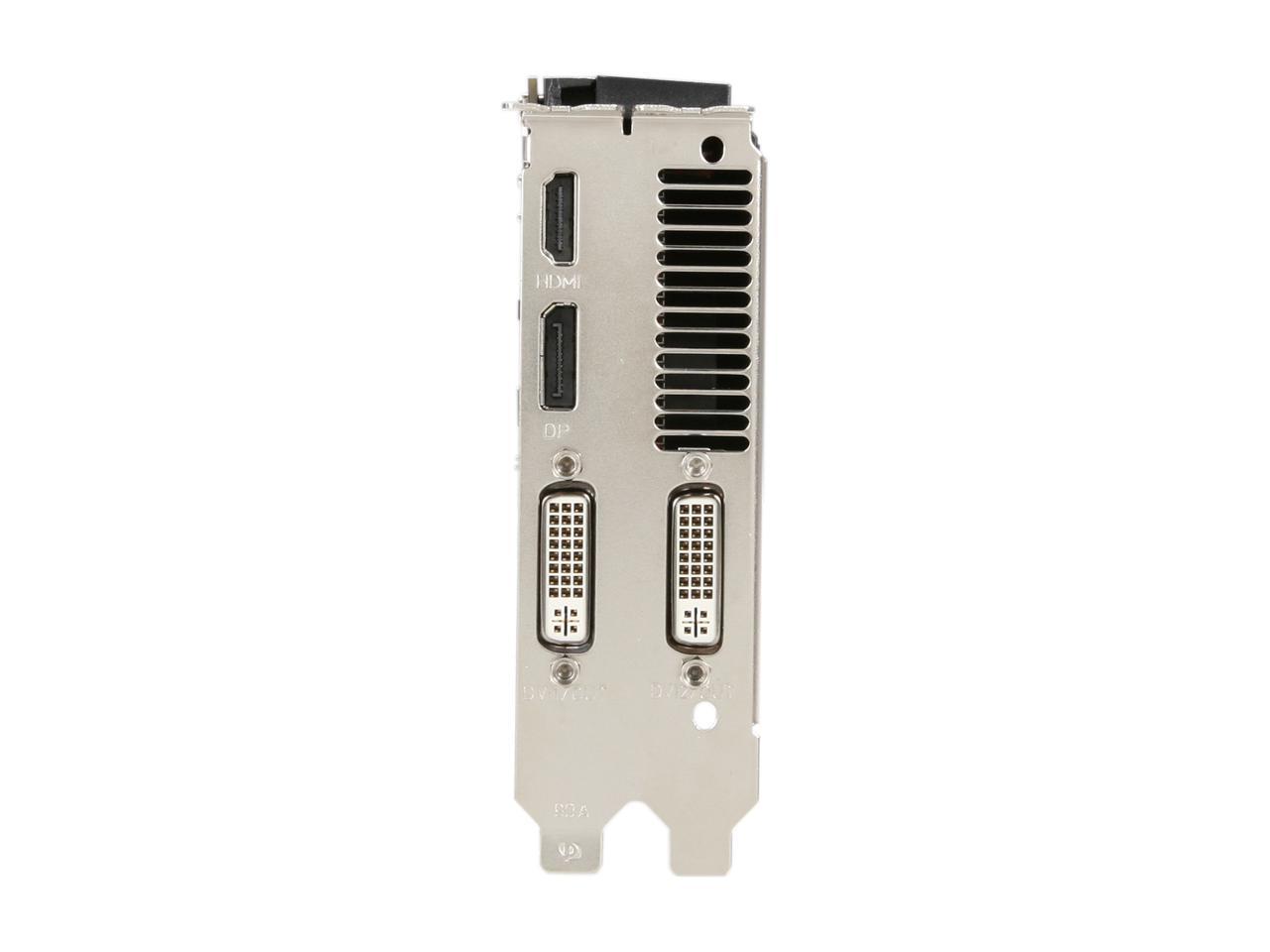 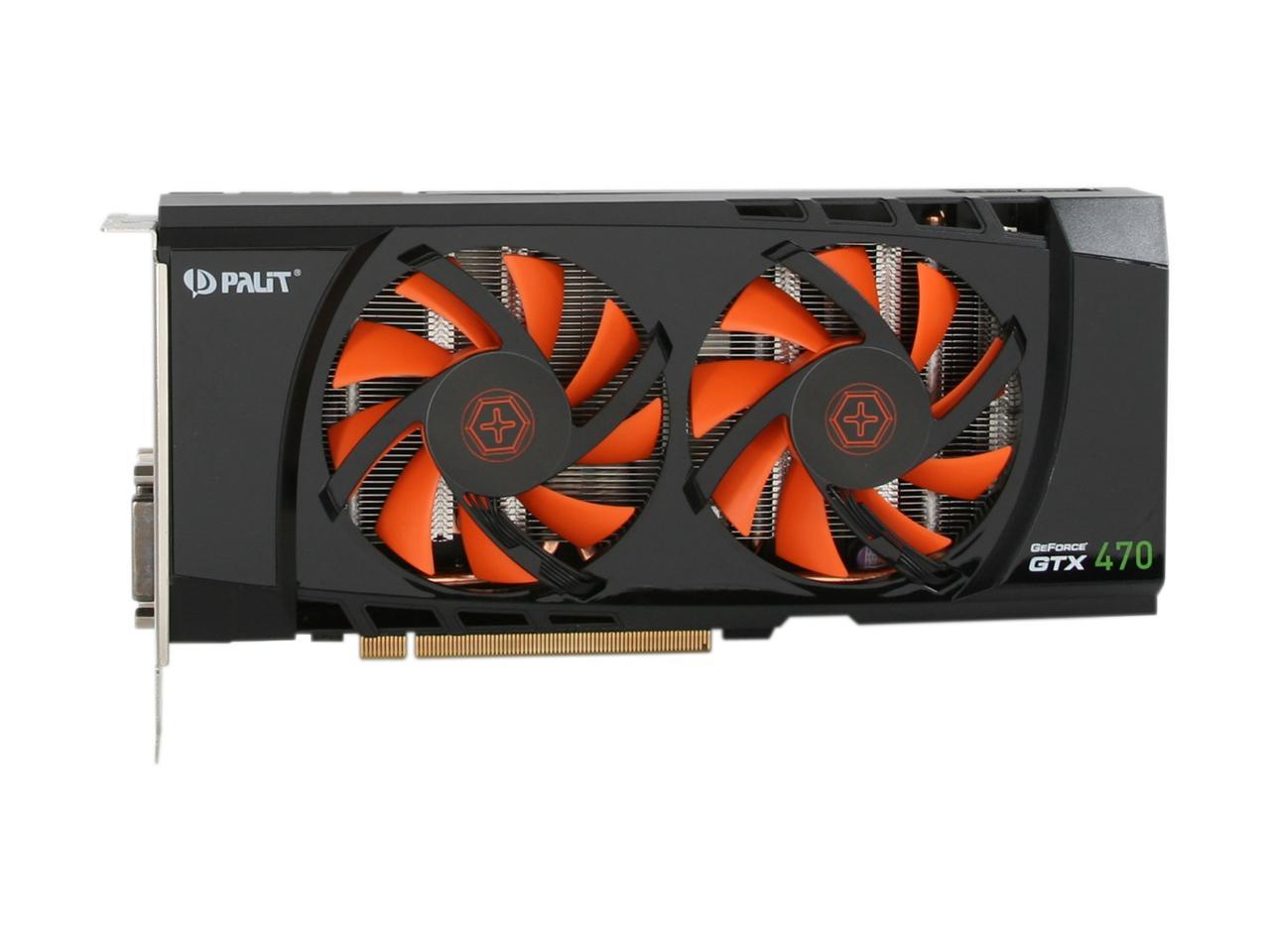 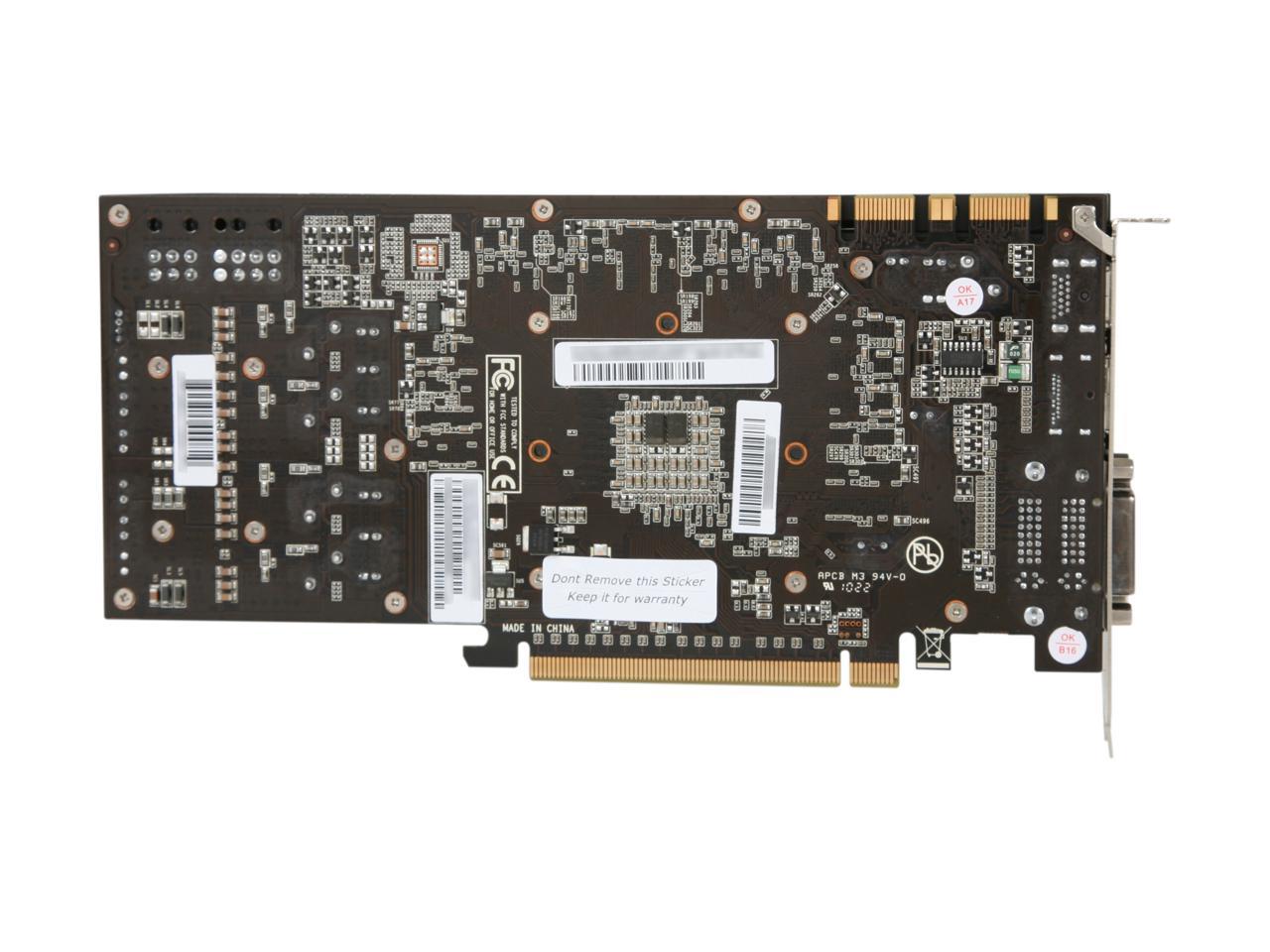 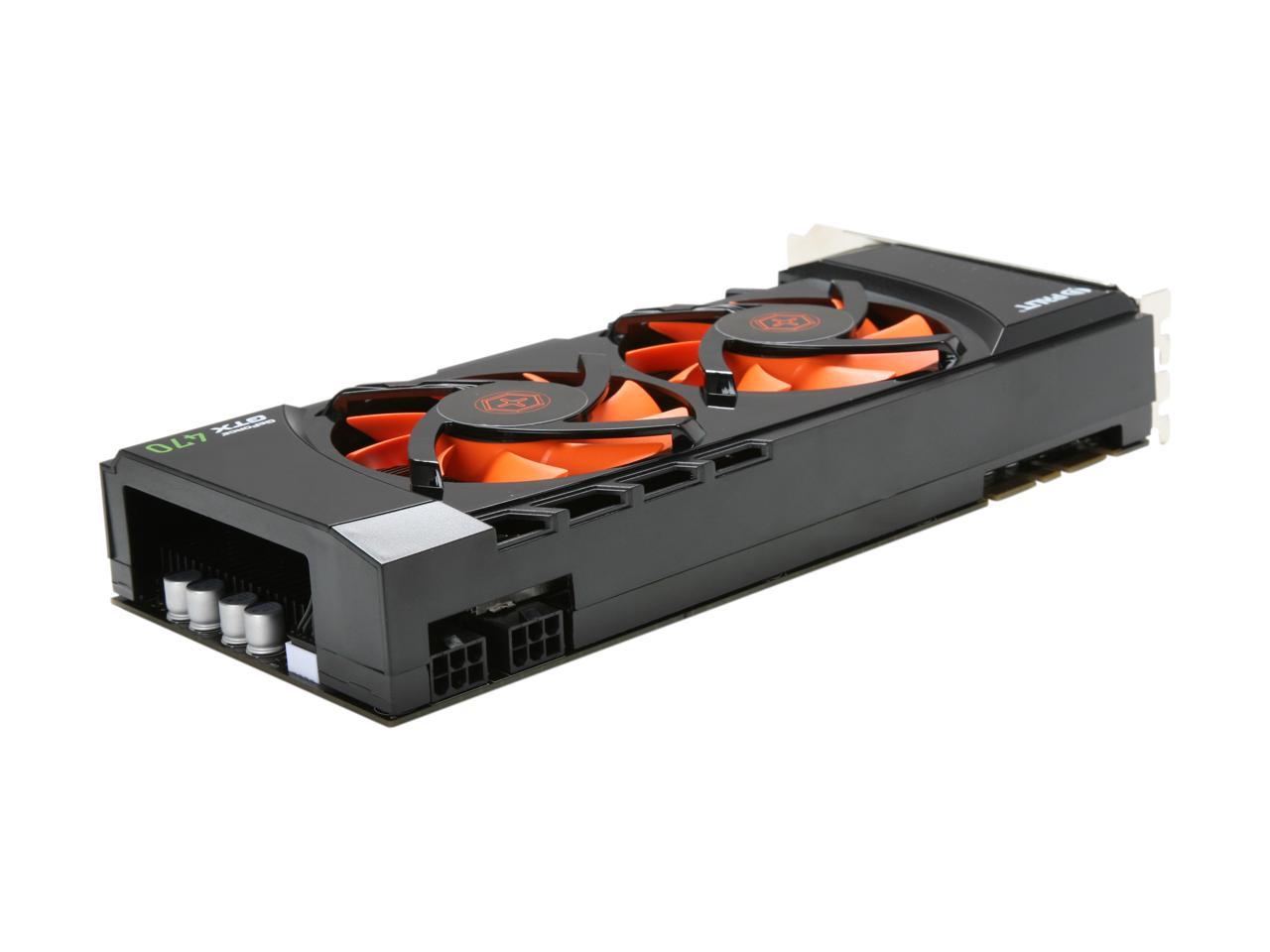 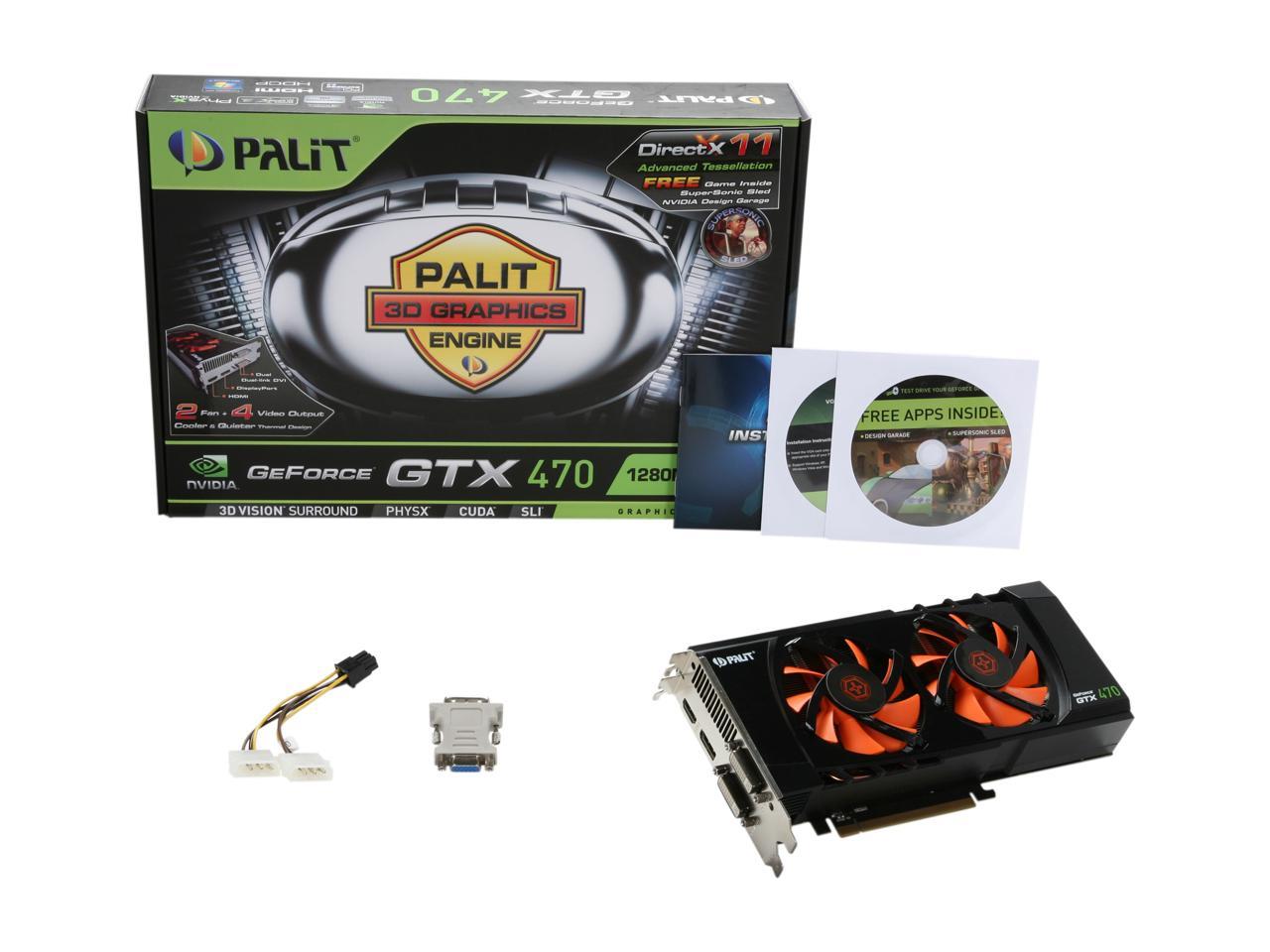 Cons: I ordered 2 cards at once. One card required 2 8pin PCIx connectors yet came with a single 4pin molex to 6pin PCIx adapter, with 8pin plugs?? This card also has 480 cores. All GTX470s are 2x6pin with 448 cores. Like I said I ordered 2 cards, one of them is the normal 2x6pin PCIx, 448 processor cores. One is a weird 2x8pin 480 core board. I would have guessed it was returned after being reflashed firmware for the extra cores, but the physical 8pin connector change makes it obvious that the manufacture made it this way for some reason. (probably to beat every other GTX470 in benchmarks. This has a GTX480 GPU with everything else GTX470 spec'd. Con: Only got one-weird card in my two card order. Now have a 480 core and a 448 core GTX470. still works in SLI. I guess it was a free bonus. Wasn't ready for it as in PSU connectors. Beware you may get a 2x6pin card with 448 cores or a 2x8pin card with 480 cores. One has manufacture revision 1000, one is 1002, same IS

Overall Review: Ordered two of the same cards got two vastly different cards physically, yet both GTX470s. A GTX470 is supposed to have 2 SM unit disabled for 448 cores. A GTX480 has 1 SM disabled for 480 cores. The GTX470 I received has 1 SM disabled and 480 cores (not as advertised or normal) and also 2 8pin PCIx connectors. I don't know if the card is a fluke or a revised way of having better benchmarks than other GTX470s makers. Was not expecting to need 2 8-pin connectors. I was half lucky that I only got only weird card and the other card has 2 6-pin connectors. The manufacure's website mentions this weird 2x8pin card with 480 cores no where. And it IS a GTX470, everything else, memory width, memory size, everything is GTX470. The 2x8pin & 480 cores to supply extra power obviously was done knowingly but no where does newegg or the manufacture acknoledge this change. Even sent a 6pin PCIx to 4pin molex adapter with a card that has no 6pin connectors. Very strange.

Pros: Great card. I get around mid 50 to low 60FPS on BC2 at 1920x1080 with 16CSAA 16AF High settings and HBAO off. The temps are not bad at all. Playing BC2 for a while saw the max temp at 64c but stayed at 62 for the most part. I did see the temp at 82 when I first started playing but I realized that the fan speed wasn't set right with being on auto and switched it to 100%. Noise isn't noticeable but I have 6 other fans in my case.

Cons: It doesn't make my dinner for me.

Pros: I recently put together a new pc. I wanted some type of GTX 470 for it, solely based on the the data i was getting on a benchmarking site. It was showing highest performance for my budget bracket hands down. The Card ran Red Faction Guerrilla at its max settings. Theirs nothing quite as satisfying as watching an entire building blow up into tiny bits of rubble, have it look real and have no lag. After playing red faction i purchased cysis in order to push the card even futher. I was able to run cysis at its max settings. I had no idea, that games had become so dam realistic. The game looks better than real life. This card can take you into the age a almost photo realist gaming. I Could not be happier with the result. Heres what im running intel core i7-950 X58 sabertooth mother board 3x2 dims off ocz memory (Memory Model OCZ3G1600LV6GK) Western Digital Caviar Blue WD10EALX 1TB 7200 RPM 32MB Cache SATA 6.0Gb/s 3.5"

Cons: Ok, this card is really big. It looks like my x52 sabertooth can Barely fit annother card like it, if i wanted to run 2 in sli. ... Barely

Overall Review: RMA for replacement... was NOT exactly smooth... But Chelsea(from newegg) is a Super Girl, she fixed everything for me. I am very happy now!

Pros: Now with 480 Processor Cores instead of 448! Highlights from Nvidia's System Information (Nvidia Control Panel): GPU processor: GeForce GTX 470 CUDA Cores: 480 Core clock: 607 MHz Shader clock: 1215 MHz Memory clock: 1674 MHz (3348 MHz data rate) Memory interface: 320-bit Dedicated video memory: 1280 MB GDDR5 Video BIOS version: 70.00.21.00.00 In my quick earlier "review," I noted this card has two 8-pin auxiliary PCI-e power connections rather than two 6-pin ones. The extra 32 cores is why. Not sure when Palit decided to make this "engineering change," but I'm not complaining .. much. I haven't tried overclocking the card at all. I suspect with some extra attention to cooling, I would get up to near GTX 480 speeds. (The 470 still has a narrower memory interface.) My Metro 2033 benchmark min FPS is 3x & avg FPS is 2x what I had with a GTX 275. 3DMark scores are 43% higher. I dropped in a faster CPU though so it's not a fair comparison.

Cons: Since I didn't know about the change, I wasn't prepared to supply two 8-pin PCI-e connections by either getting a new PSU or 6-pin to 8-pin adapters. My PSU has plenty of wattage, but was made when SLI meant two 6-pin connectors. A late evening trip to <a _micro_ computer store in the _center_ of a shopping area that Newegg won't let me mention by name> cost me $9 in tolls and $14 in adapters, but I was in business the same night. Make sure you have (at least) a pair of 8-pin connections on your PSU or buy the adapters (if you have the wattage). The single adapter from two 4-pin Molex to a 6-pin PCI-e included in the box added insult to injury. It couldn't even be used with the card. All-in-all, it was minor inconvenience, but save yourself the parts run. I'll take the free 32 cores.

Overall Review: The box this graphics card shipped in was bigger than the box my new motherboard shipped in. Seriously. It was lots of foam. It's nearly as heavy as the motherboard, too. I didn't get the free Mafia game because I put the card in my wish list and back into my cart from there. Any freebies are only added when you add items from a product page. From what I read though, I should add an extra egg for *not* getting the game.

Pros: This video card was purchase solely to use with my 27" iMAC as a display through displayport. It works and most resolutions and is purely perfection when it comes to PC gaming on the iMAC. All my games look like a dream and no need for bootcamp on iMAC. The free game "MAFIA 2" was a huge push in the purchase. Thats a $50 game that adds on to your Steam account. What more can I ask for. Gaming on a iMAC IPS LED monitor is the BOMB! If your using this on a HDTV, no need for an adapter. Standard HDMI output is on there too!!! That's for ways to show off your killer graphics card.

Cons: You do need to buy a separate Mini Displayport to Displayport adapter separate so make sure you add that to your cart. All overclocking this card gets HOT and NOISY. The manufacture used a Brown Board and cut corners to make this card affordable however that explains the low warranty :(

Overall Review: I should have bought another one for SLI config. Why can't Palit make a HighEnd version of this card. They hit the nail when it comes to 4 video optional output.

Cons: Power Hungry, could have been worse though.

Overall Review: Mainly got this card for the Display Port which works with my iMac computer monitor.

Cons: None for me. Very happy

Overall Review: Purchased to use displayport output to my iMac 27" in target display mode for gaming. Works great and can game at native resolution of 2560x1440 on mac screen.