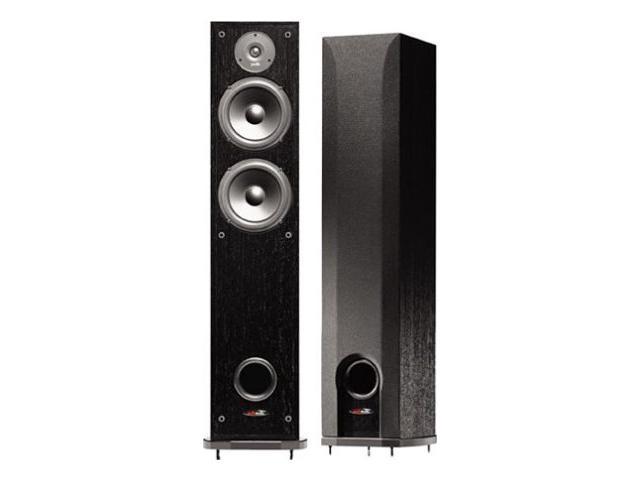 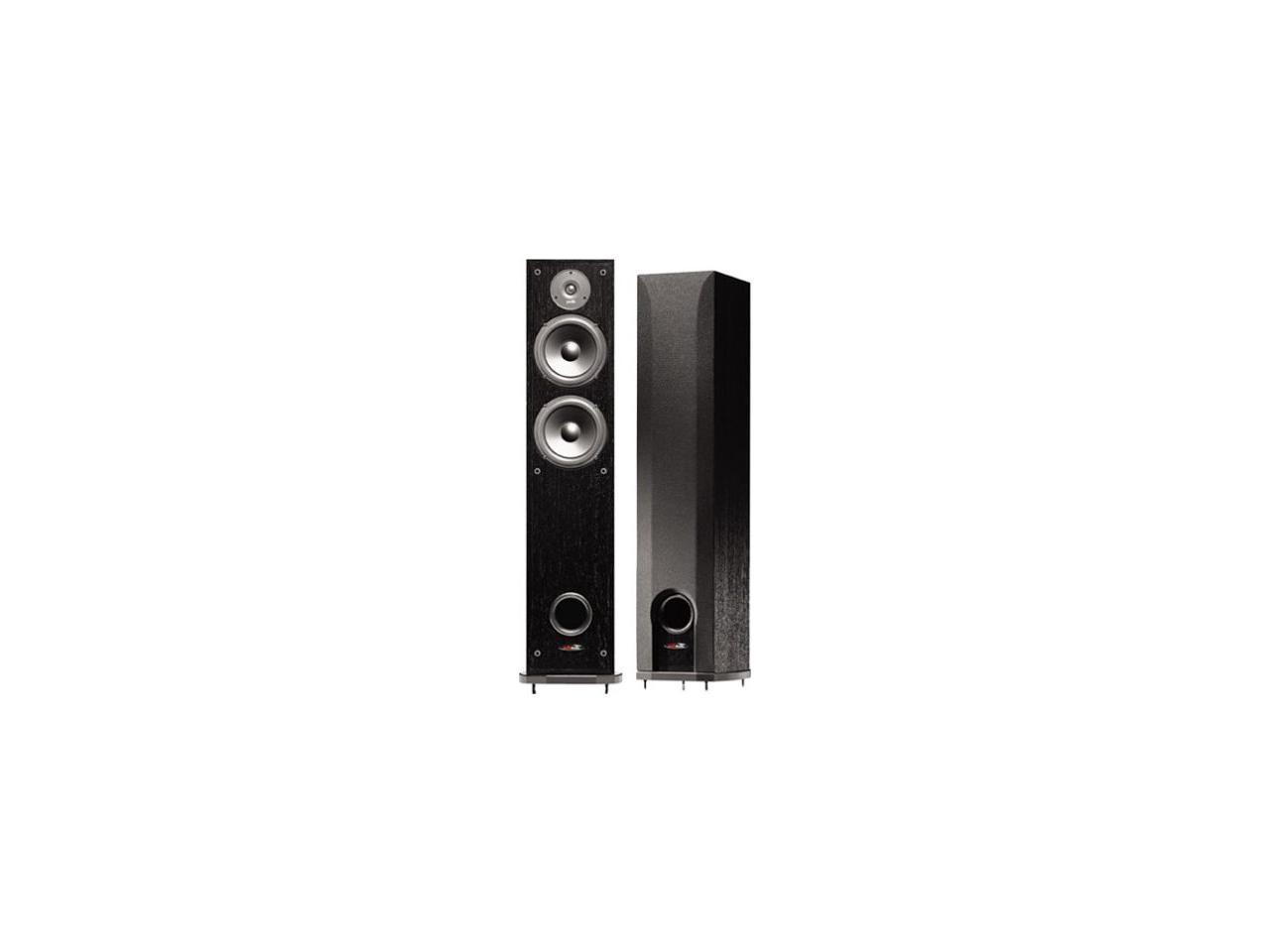 A two-way floorstanding speaker ideal for both music and movies. It comes equipped with a 3/4" silk/polymer dome tweeter for clean, crisp highs, and dual 6-1/2" dome woofers that pair with a front-fire bass port for dynamic mids and rich lows. Both the tweeter and dual woofers use exclusive Dynamic Balance technology, which is a combination of design technology, materials and construction techniques for delivering legendary Polk Audio sound.

This speaker is easy to install occupying less than one square foot floor area, and looks good featuring real wood veneer. Magnetic shiedd means you can place the speaker near TVs or monitors without causing interference or distortion. It's sold in single unit. Get two for your stereo arrangement, or four for your home theater surround setup as front and rear left/right channel.

Pros: The build quality is pretty good. The fit-and-finish is good

Cons: horrendous sound. Muffled highs, lack of mid-range, muffled bass. Update: After I fixed a solder point in the crossover of each speaker, sound has dramatically improved. There is still a good bit of harshness in the highs, but the mid-range is "night and day" better, and the low-end much more defined.

Overall Review: I would not recommend these speakers to anyone. Having owned many Polk Audio products, I was expecting more. These speakers can only be described as AWFUL. I got them on sale, and that was paying WAY TOO MUCH for them. I will put them up for sale, perhaps someone likes the way they sound. UPDATE: Having heard a similar pair of Polk R50s at a co-worker's home, which sounded significantly better. I investigated. In both speakers I have (sequentially 5 units apart per serial numbers) there was a faulty solder joint in the crossover. This may have been a manufacturing defect, but perhaps due to rough handling in transit (speaker boxes were substantially damaged by UPS, but speakers appeared intact). I re-soldered the defects, and the sound made an instant and significant improvement. At this point, I am going to keep the speakers, as they now fit the parameters for which they were originally purchased. At this point, I would recommend them to others for purchase, especially if you get them on sale and your listening room is relatively small.

Pros: I was using a pair of Polk M20's as my right/left speakers and a Polk CS2 center channel speaker for my primary sound system in my living room. Due to my setup, I couldn't place the center channel on my TV stand, under the TV. So I had to lay it vertical, on the floor, to the left of the TV. Not a good idea with a center channel speaker. It is built to be horizontal and directly in front of you. Anyway, I lived with it. But when I upgraded my Onkyo subwoofer that came in the HTIB, I purchased a Polk PSW505. Amazing, large, powerful, but clear beast of a sub. But it overpowered my Polk M20's which are decent speakers but only have one 6.5 inch woofer. I decided to upgrade to a pair of these Polk R50's since they have dual 6.5 woofers. They turned out to be real game changers. Incredible sound and clear. Not harsh like some BIC speakers I own for my budget system in my basement. First, I was surprised how powerful they are. My amp/receiver can play much louder at a lower volume level on the receiver, with these beauties. They are crystal clear too. I was really very surprised by the bass. Very powerful bass for speakers with such a small footprint and 6.5 inch woofers. You can get away without a subwoofer with these towers. But if you really want to take your music to another level, definitely add a sub like the Polk PSW505. So I was really happy with these speakers but had another problem. Now the center channel speaker was even harder to hear for movies. So I read some recommendations on line about it being a good idea to use the same speakers as your left, right and center speakers. It was suggested that all three speakers should be the same instead of using a different center channel speaker. It made complete sense so that's what I did. I purchased a third R50 and use it as my center channel. Yes, it is a bit off center but I could now hear the dialogue/voices clearly in movies. If you decide to go this route, do not lay this speaker horizontally. I don't see anyone doing that anyway because it's too big... but you never know. The third R50 also improved music as well. I bought these speakers for only $90 each from a NY based electronics store. I now use my M20's as surrounds and along with my Polk PSW505 and 3 R50's, I have an amazing sounding system and didn't spend a lot of money. I highly recommend these floorstanding speakers. They are a fantastic purchase when considering quality and performance vs price.

Pros: Outstanding bang for the buck!!...Right out of the box, these sound pretty good, but once they are broken in, they sound excellent!!..I have used them in my home theater and were great, but they really shined as a 2 channel set up, with my turntable.

Pros: Inexpensive, crisp sound, full bodied. Enough bass on their own without a sub.

Pros: Easy to install. Actually taller then I was expecting but then I didn't check dimensions, didn't care, but it was a nice to be surprised. They sound good even when cranked up. Despite their thin size, they manage to have ok low frequency response (ie- base) but not great. Comes in other finishes if desired.

Cons: These are high on the treble side to my ears and I had to adjust the EQ in my receiver to tone it down some. These would also benefit from a sub in my opinion.

Overall Review: Yes I would recommend these to anyone on a budget and isn't an audiophile.

Overall Review: Was setting up a surround setup in my office. Bought 4 for left, right and the surrounds. I paired them with a Polk Audio Signature Series S35 Center Channel unit and Subwoofer. All tied in to a Onkyo receiver. Results have blown me away for clarity and sound during testing. I would not purchase for just stereo, they lack a little bit of power for music, however this is completely solved if you have it in a surround setup with subwoofer. Cannot recommend them enough in this type of setup.

Cons: None I can see or hear

Overall Review: At the price, I have no regrets. Go get a pair.

Pros: Arrived fairly quickly and undamaged, and they sound great.

Overall Review: I would by these again. One of my 30 year old Sony floor speakers had developed a bad noise. These sound great. I have my Sunday morning making breakfast sound fest back!