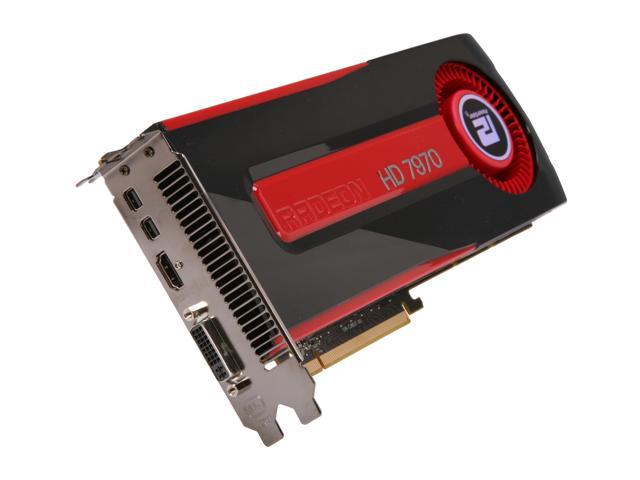 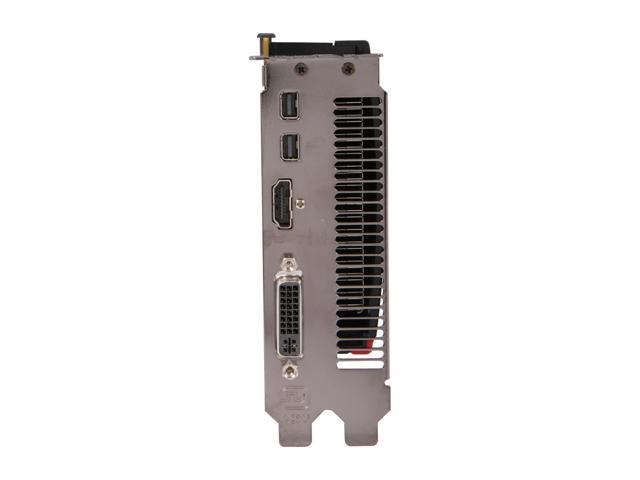 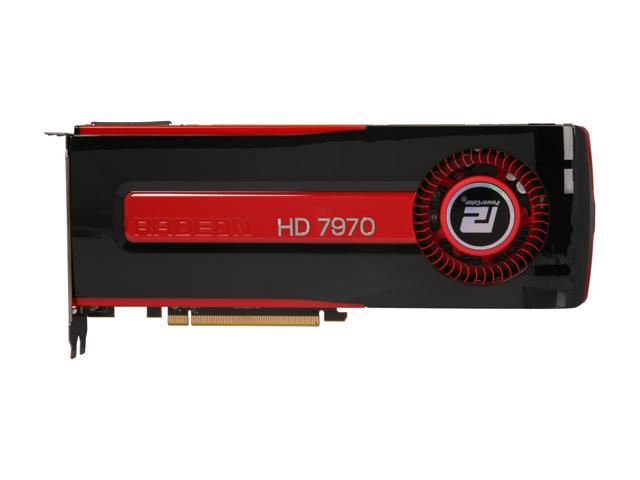 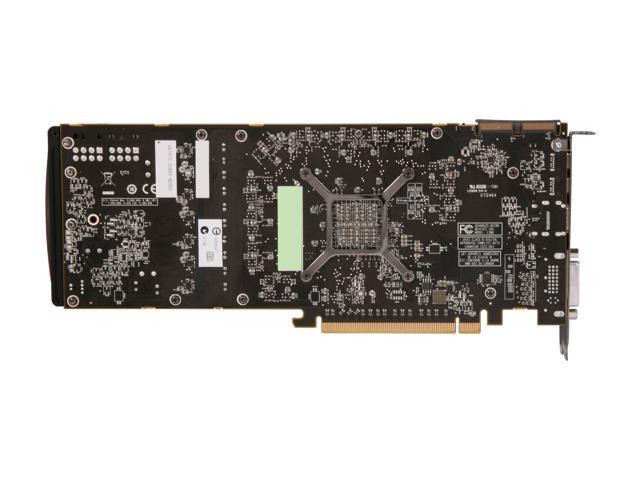 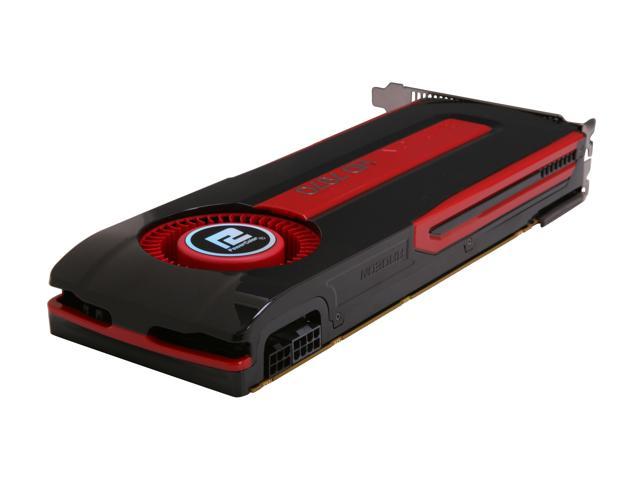 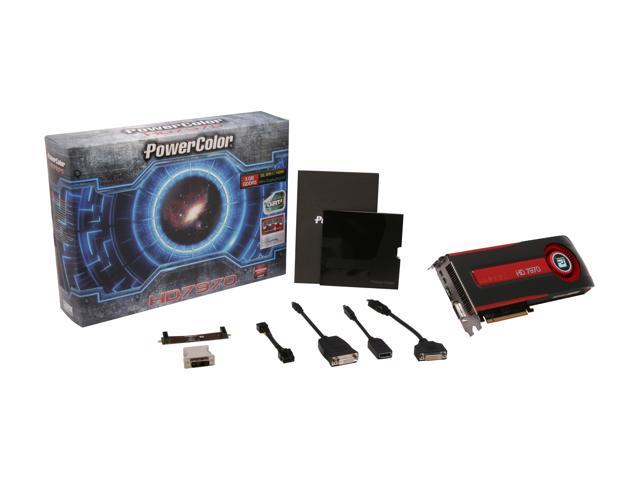 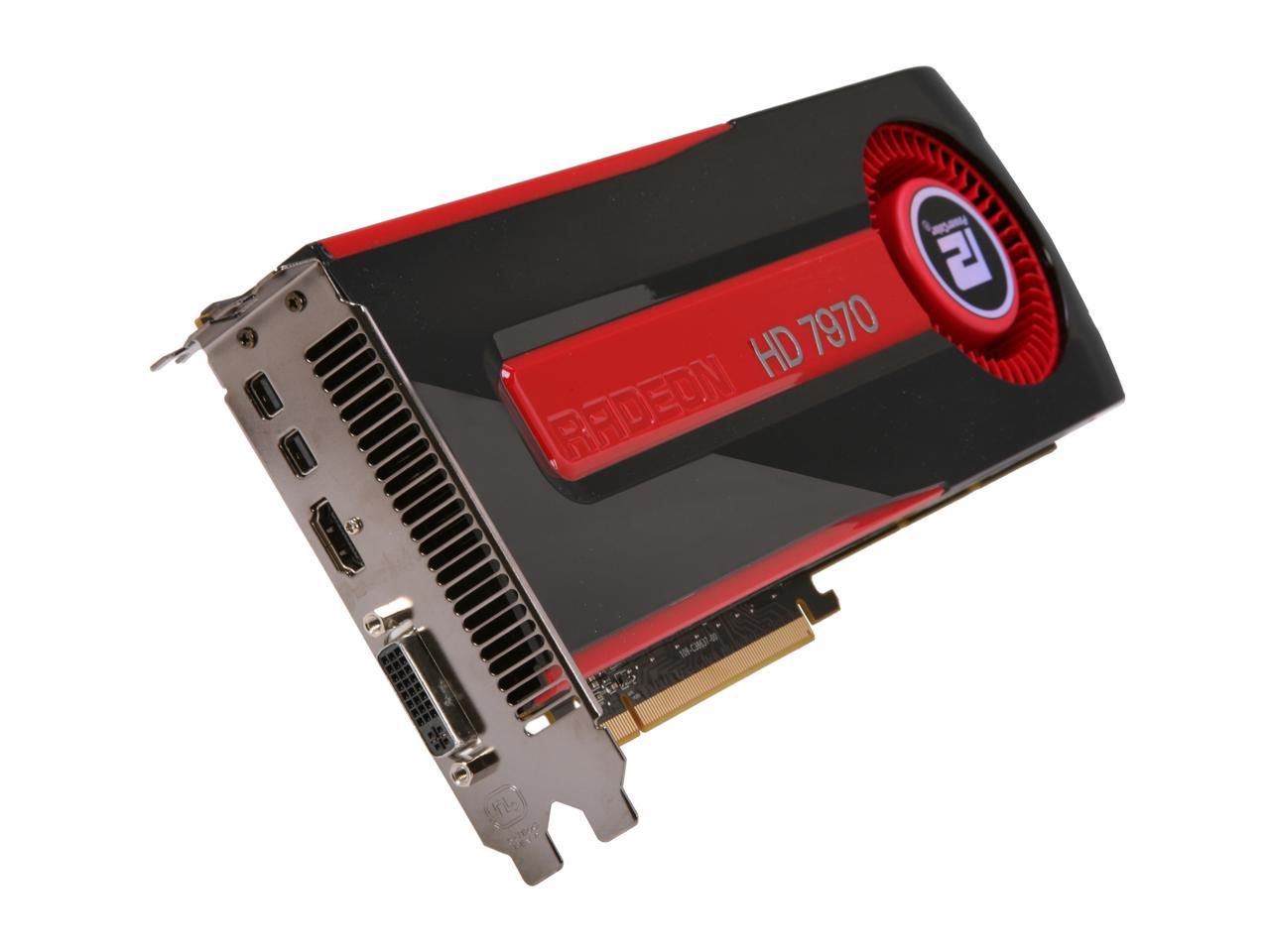 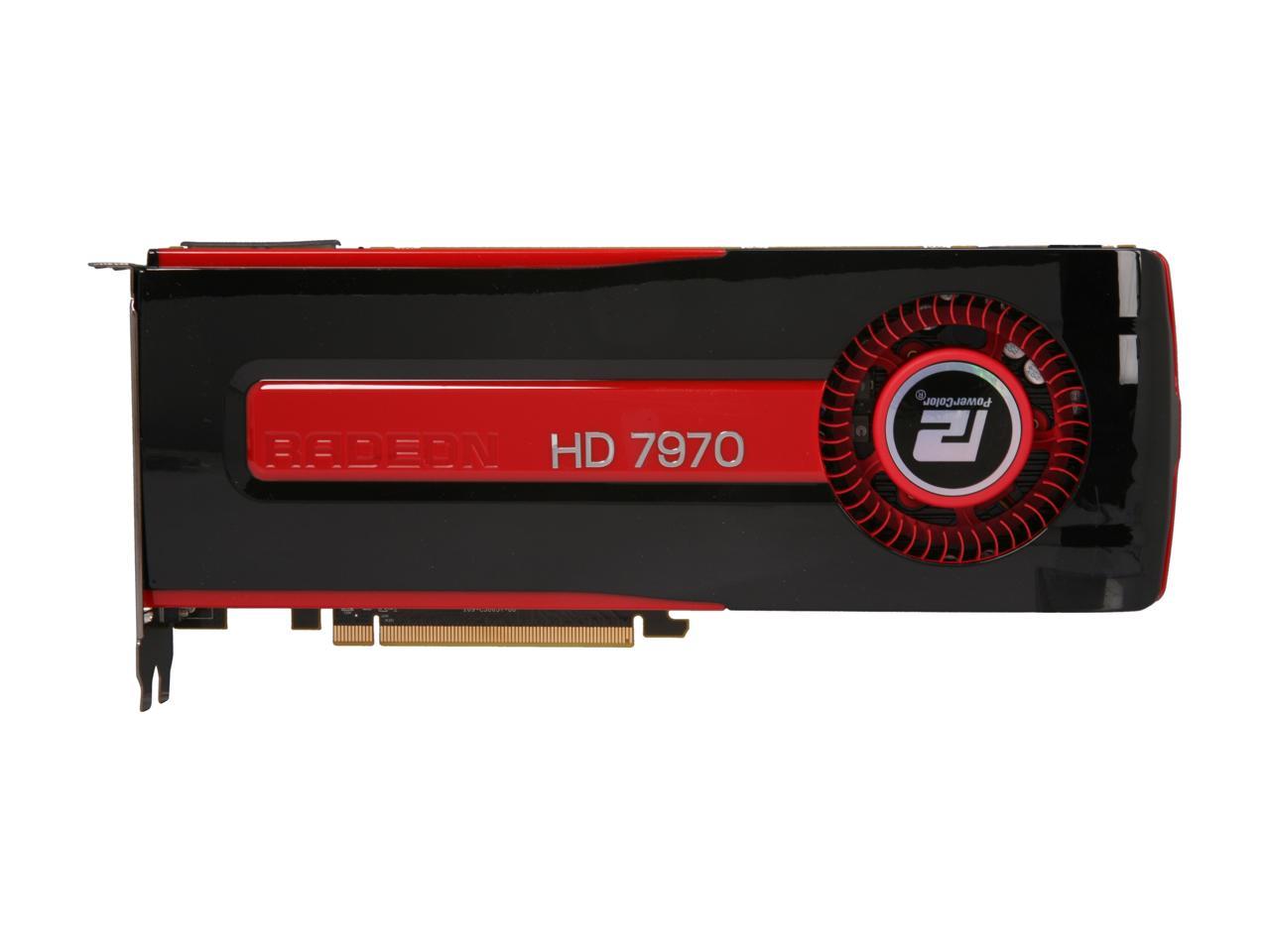 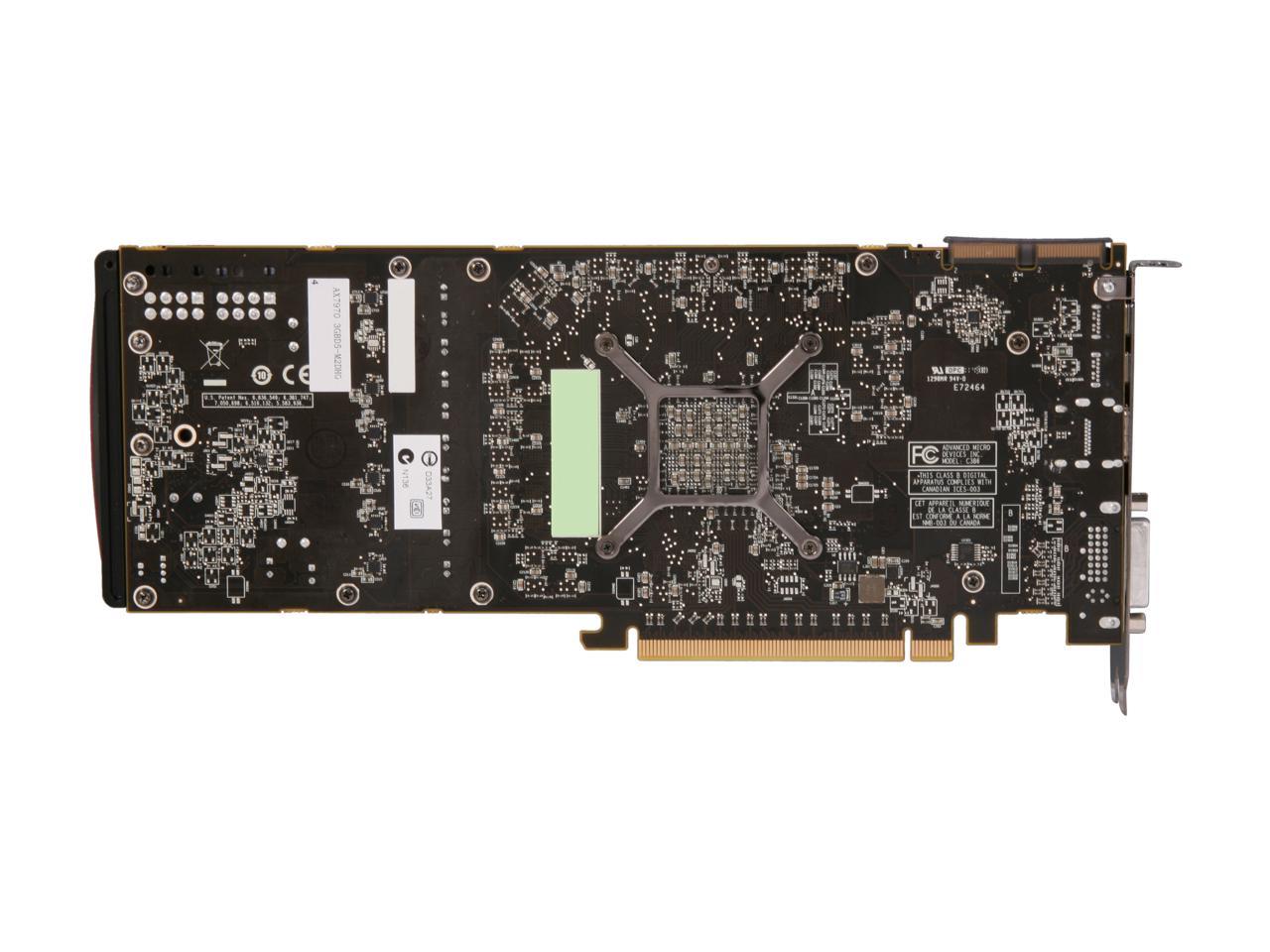 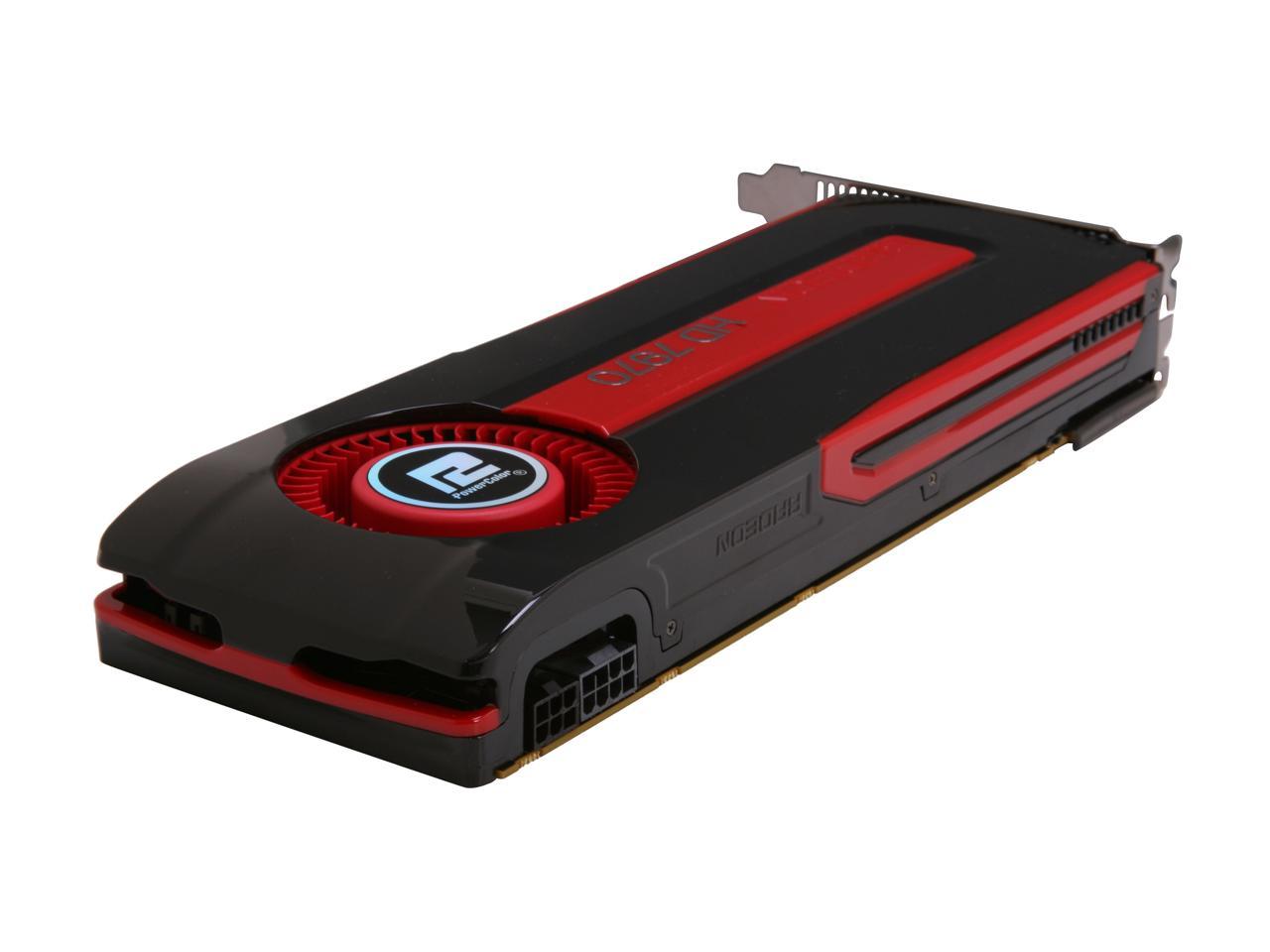 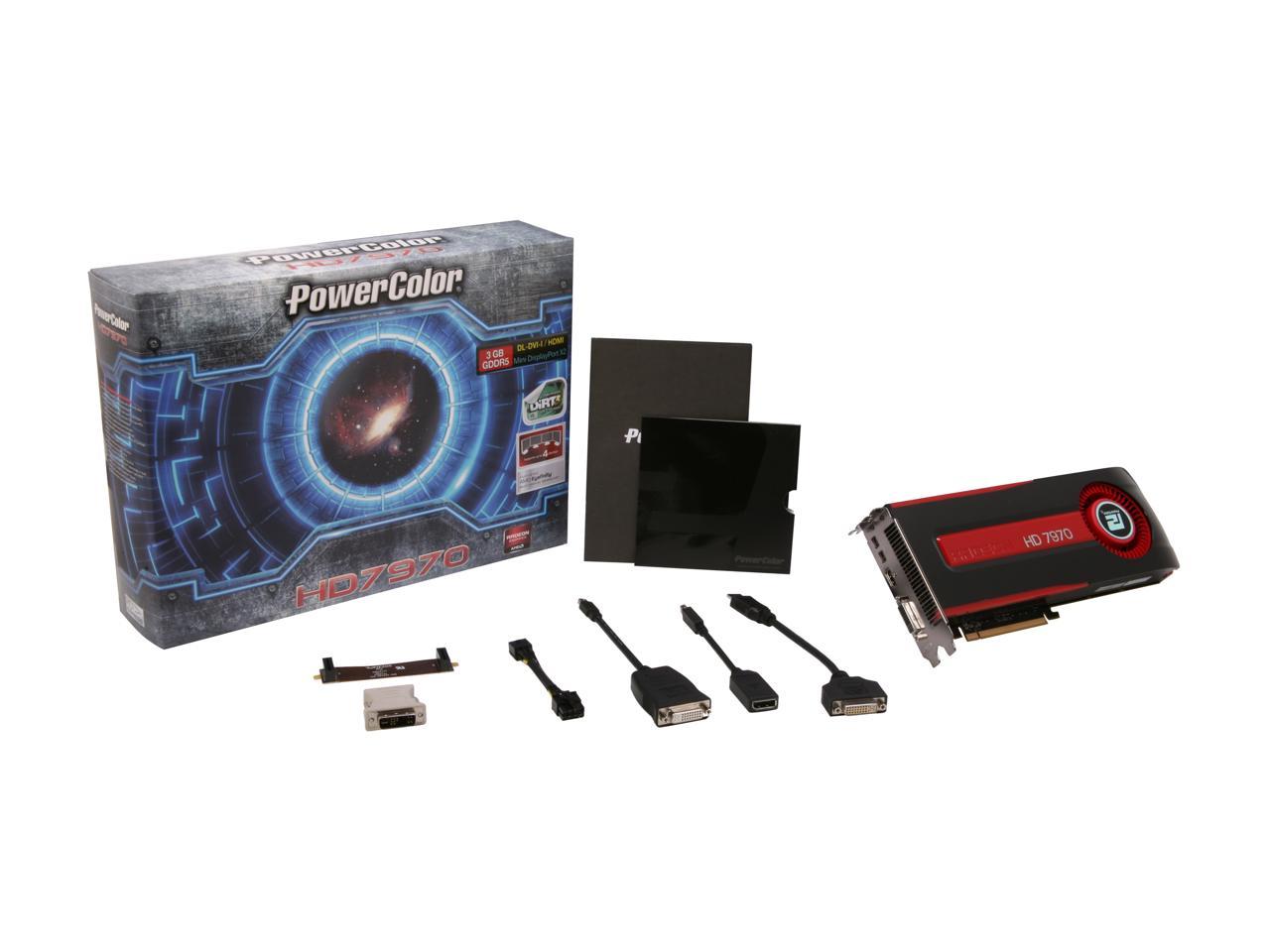 Based on the revolutionary new 28nm GCN (Graphics Core Next) architecture, the PowerColor HD7970 enables the absurdly high frame rates at demanding setting while using less power and better transistor efficiency, and maximizes the most astonishing gaming performance like never before.

The PowerColor HD7970 comes natively equipped with support for PCI Express 3.0. With world-class AMD CrossFire performance scaling, enthusiasts' GPU experience is maximized when paired with the latest platforms. By utilizing AMD PowerTune technology, the PowerColor HD7970 performs a real-time power draw to enable higher clocks and faster gaming; furthermore, with AMD ZeroCore Power Technology, no power is wasted when the graphics card is not in use.

HD7970 also ships with AMD Eyefinity 2.0 technology which features all-new support for stereo 3D, universal bezel compensation and brand new display configurations. Fold and mine faster than ever with AMD App Acceleration to speed up daily applications such as video rendering, web browsing and office applications. The PowerColor HD7970 is your personal checklist for ground-breaking technology.

Pros: i Will not mention the obvious that one can easy look up in dozens of benchmarks. The box is more than twice the size of my hd5750, that card is heavy. The plastic seems reliable solid not cheap, switch bios from the top. This comes with an active adapter which i thought was an excellent idea that saved me 30 bucks. The cooling system is impressive, usually they are small and weak for stock cooling. I like the cooling system design it is very efficient for this card. No fess gets right to work even with the frantic driver re-installs. The "HD7970" sticker is actually metal not decal paper. Every connector comes cover with antistatic caps, very thoughtful and handy. The performance is flawless on all counts, this card is just plain and simple perfectly great.

Cons: Not a con but something to consider, fan set to 100% sounds as if this thing is about to take off(like and aircraft carrier). However it does more than great to keep it cool.

Overall Review: The 12.02 32bit catalyst drivers come on the CD and nowhere on the internet, which gives me a new respect for included software. That CD was the only reason i was able to install my cards. Review that claim the gtx580 smoked this thing. Needs to re-install their card, many benchmarks say otherwise, those few that do not. One can easily deduce form their results and other card comparisons, result of others with same setup that installation was not correct. Great packing nothing was cheeped out on everything to me in the box is worth the money.

Pros: As a previous reviewer mentioned before, there are plenty of reviews, benchmarks, and the like all over the internet. A quick look at guru3d, hardocp, or anandtech will tell you everything you need to know. What I will say is that this card runs every game I have on maximum settings (both in-game and catalyst) at nothing less than 35fps. Skyrim looks amazing, especially after changing the ini to include high res shadows and a further draw distance. Neither the card nor the cpu flinches at anything I've thrown at it. Like many reviews have said, I was able to overclock this card to 1125mhz clock/1575Mhz memory right out of the box without changing the voltages or increasing the fan speed. Even with the overclock and under heavy load the card stays around 53c constantly and it could be cooler with the fan set past 40%. Honestly, I couldn't have asked for a better GPU. If you are in the market and the price doesn't scare you away I say buy it, you wont regret it.

Cons: A tad pricey but you get your money's worth. Other than that none.

Pros: Unbelievably Fast! Coming from a PowerColor 5870 which OC like a champ to this card was an amazing upgrade. To top it off I am able to OC this baby to 1293/1725 core memory :D, default is 925/1375. Once again PowerColor does not dissappoint, well pacakged, excellent game, all the adpators to make virtually any monitor(s) combo work. I could find no flaws to card, very high quality workmanship. 3GB of memory should play any game now and far into the future with high resolutions including Eyefinity

Cons: Fan can get loud over 50%, never gets there at stock clock speeds but when pushing the OC it can get loud

Overall Review: This is a very excitting product, drivers are working great for this new arch, while not perfect, for single cards I havn't found any real problems there. New drivers just came out supporting super sampling for DX10/11. A very nice option which Nvidia use to only have before. Compute performance is better then Nvidias current generation so AMD did really good with this new design.

Pros: Biggest pro to me that sticks out with the Power Color specifically is that you get Dirt 3 with the card. A much better perk than a cool decal. As with most of the references card they are all pretty similar. I was able to overclock to 1140 for the core stable and 1550 for the memory stable. Amazing headroom from a reference card. Running it in a Mini Itx case and it is much cooler and quieter than the 6850 I had last. Just a quick benchmark result. Dirt 3 in game benchmark (came with the card) Average of 46 FPS on 5760x 1080 resolution. Highest graphical settings and 8x MSAA.

Cons: The HD 7970 stickers are cheap and come off really easily. Would be a much bigger seller if it dropped under the 500 dollar mark.

Overall Review: Great card for the price, while it is a little high no single GPU is close. Will Nvidia outpreform it eventually, yes. Nothing is completely future proof, but with this performance it will last for a solid period of time.

Cons: only 4 monitor support ?? I guess that is a con

Overall Review: Im really happy with my purchase, it was very expensive, but a single card solution is quiet and cool compared to crossfire... MB temps dropped significantly. It has surpassed my expectations.. games are running smooth butter and appear more detailed then w/ 2 6870s. My rig is Gigabyte 890fxa-ud5, 8GB 1866, 1090t @4.1GHz, vertex3 ssd NZXT Phantom case... I dunno if this card will perform as well as 2 6950's once you have it tweaked, but I think it will be close...

Pros: I've mainly run two games with this card. In Battlefield 3 I get 60-80 fps on average running the game on ultra settings In team fortress 2 I usually get around 300fps with all the settings maxed because that's as high as counter will go. I think I still have lots of headroom to push the card but I doubt I will do that for several years

Overall Review: I recently heard the xbox 720 will be running on a GPU comparable to the AMD radeon 6670. Can you imagine being 6-8 years down the road and still having to play on one of those things because microsoft hasn't released a better console?

Cons: It dosent get hot enough to make toast like my HD6970's

Pros: Overclocks outtta the box to max CCC limits, free Dirt 3, Runs like it should with most games maxed or pretty darn close and Eyefinity is a dream. Low temps for a card of this power. Comes with adaptors for Mini DP to DP, Mini DP to DVI and Hdmi to DPI, aswell as Dvi to VGA. Everything I expected and more

Cons: Price for sure...but you gotta pay for the best so I can't dock an egg for that.

Overall Review: Bought one of these and had problems, found out my windows installation had issues. Fixed rather quickly and runs like a dream