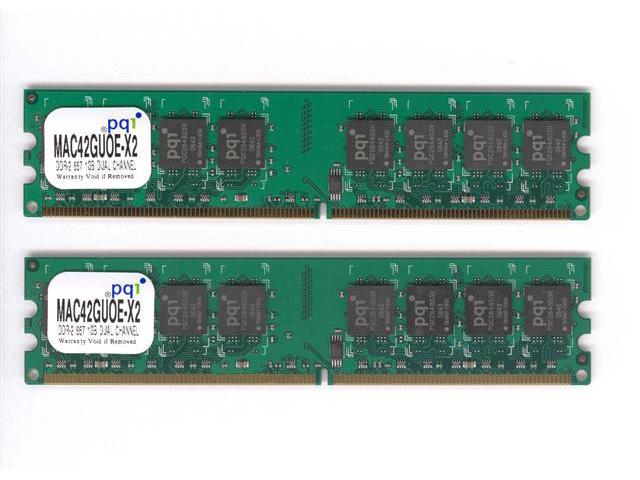 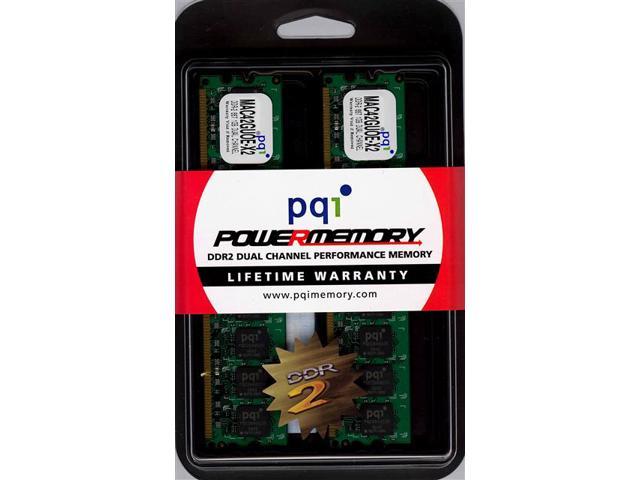 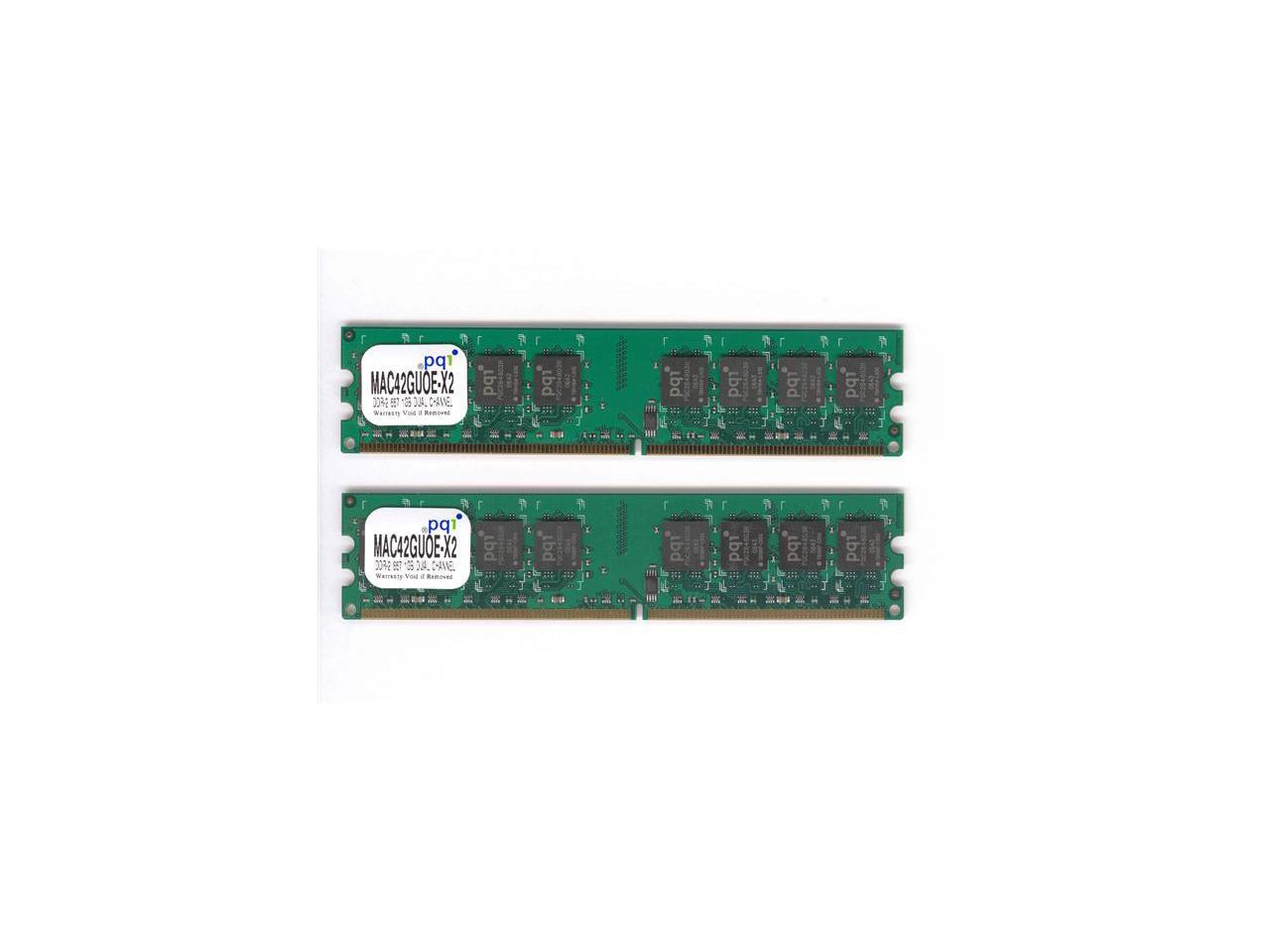 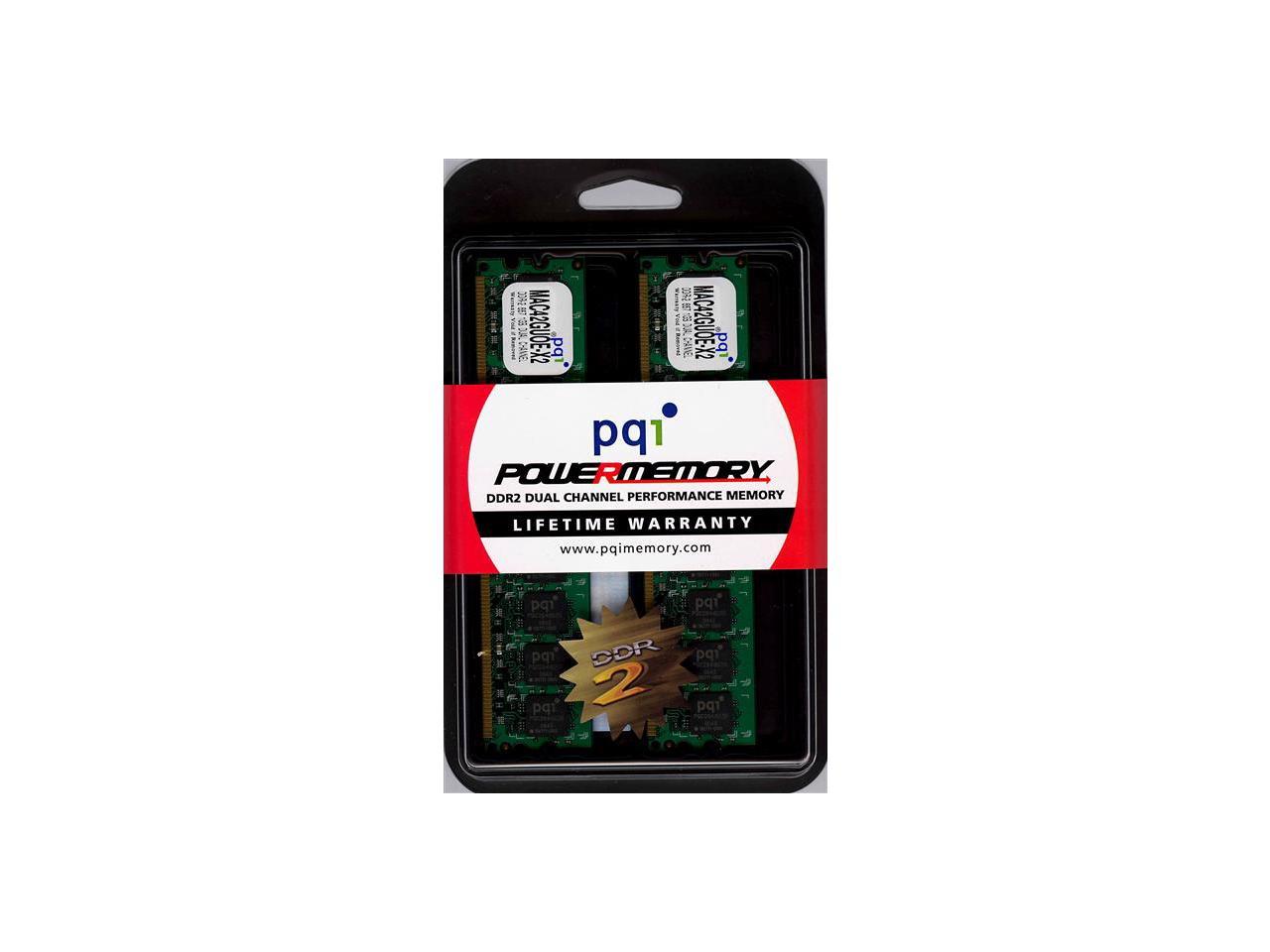 Learn more about the PQI MAC42GUOE-X2

Cons: Ram arrived and PC would not load windows setup upon boot. hordes of random crazy errors. Discovered that ram was bad. Fianlly discovered that by setting the system ram speed in the Bios to 533MHZ ( running this ddr2 667 ram at the lower speed of ddr2 4200 ) I could get the pc to boot and load windows. What does this mean? RAM IS NOT HIGH ENOUGH QUALITY TO FUNCTION AT 667MHZ SPEED, AS ADVERTISED. Currently I'm running the ram as ddr4200, will let it go for a week, to see if it stays stable at that speed, if not.. will RMA.

Overall Review: From other reviews, I suspect that these other people have had the same problem that I have had. What does this mean? The ram is so low quality that it should probably be marketed as the slower ddr4200. but the MFGR wants the extra cash, so it says "lets say its ddr667, and just handle the returns as they happen" My suggestion: ONLY BUY THIS RAM IF YOU ARE PREPARED TO HAVE IT RUN AS DDR4200. Because there is a good chance that when you get it, thats exactly what you'll have to do to get it to work.

Cons: Poorest quality RAM I have ever purchased. I bought one 2 dimm kit and found one of the dimms to be faulty, so I RMAd them. I get the replacement and BOTH of the replacement sticks do not function corrently. They crash the system even before windows manages to boot. Do not waste your time with this. A 25% success rate is not worth the shipping costs.

Cons: Does not work at rated speed, Poor performance@533MHZ No boot at 667. Overall waste of money for sure.

Overall Review: No memory from this company is any good. Replacement was just as bad no boot bland performance..End resolution, refund and loss of shipping money.

Pros: cheap.probably for a reason.

Cons: bought a totally new system from Newegg: Abit AW8-Max, Radeon x1800xt, Enermax 460w PSU (rated for this setup) Pentium 930 D, Aspire case, Liteon burner, 250gig WD SATA HD, and this memory.. 2gigs. got XP installed, installed all the latest ABIT drivers and bios, latest vid drivers, even tried old vid drivers, did everything by the book. set timing and voltage correctly, even tried different settings per tech forum suggestions. started playing a video = bluescreen with the generic memory error code. Tried to play a game, same bluescreen. I could surf all day(no imbedded video though, that killed me most of the time), but as soon as I put a load on the memory (transferring files across the network/gaming/video/music or what have you), it crashed. ran Memtest on it for 10hours, came up with over 56% failure rate.

Overall Review: I want to RMA this and get a totally different brand of RAM, because i have a sinking feeling that this RAM is so cheap because it was bottom of the barrel in terms of overall quality. Having a hard time returning it for a refund because i bought it in a combo deal.. the combo deal was that it included a Newegg hat. I didn't even want the hat and I won't wear it! trying to convey this to the customer service folks now. Likely will grab some G.Skill RAM

Pros: It works exactly as expected in my system. No blue screens or stability issues -- and I'm running Vista Beta 2

Overall Review: I didn't try overclocking. As far as the rebate goes, I'm not holding my breath. It's only 10 dollars. I'll find out in 6-8 weeks if I get it or not.

Cons: No heatspreadders, but I don't think it needs them.

Pros: runs fast at 667 don't believe people about it not running at 667 thats a lie they have some sort of bad motherboard apparently or there lyres one it runs great i have three gig all together finaly

Pros: Excellent price for dual channel. A must have for Vista.

Cons: Only Issue I had was I had to go into the bios and force it to run at 667. This was not the fault of the memory but a problem with the motherboard.

Overall Review: I am very happy with this memory.