FREE SHIPPING
Sold by: Newegg
Shipped by Newegg
Newegg’s gift-wrap service is the ideal solution for making your gift special! Select your item as a gift, then add your message. Your gift will also be discreet with no prices being included on the packing slip.
Price Alert
Add To Wish ListFound on 2 wish lists 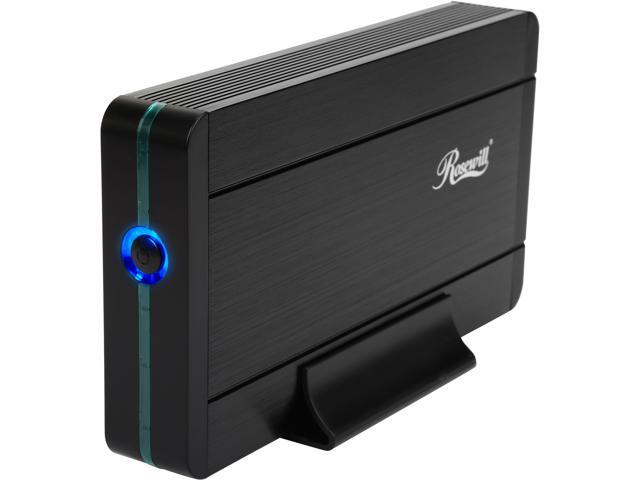 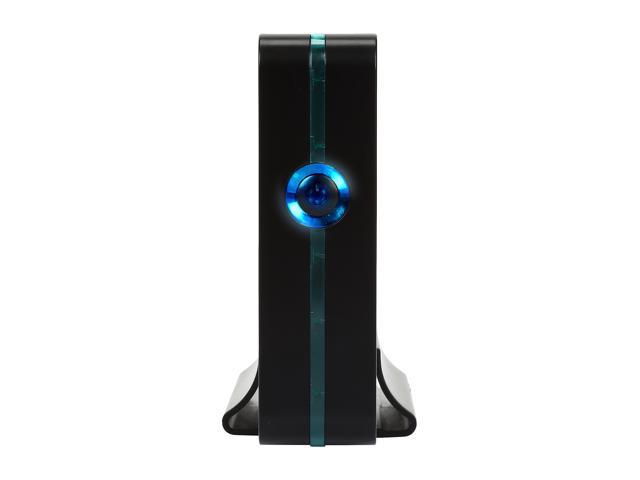 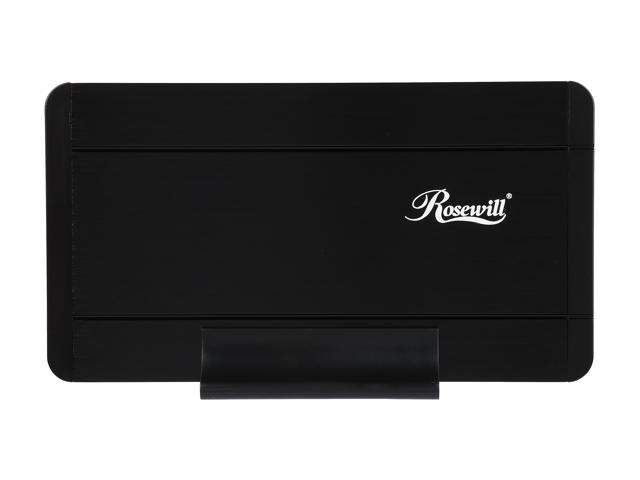 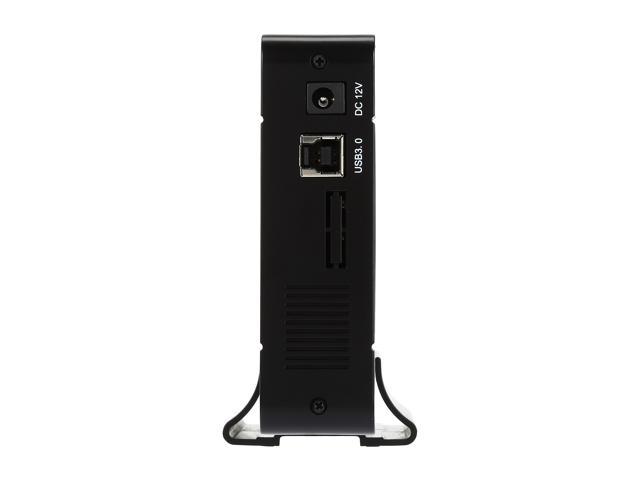 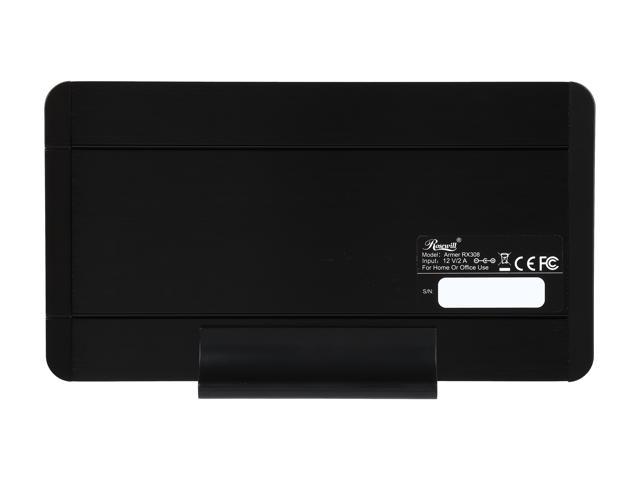 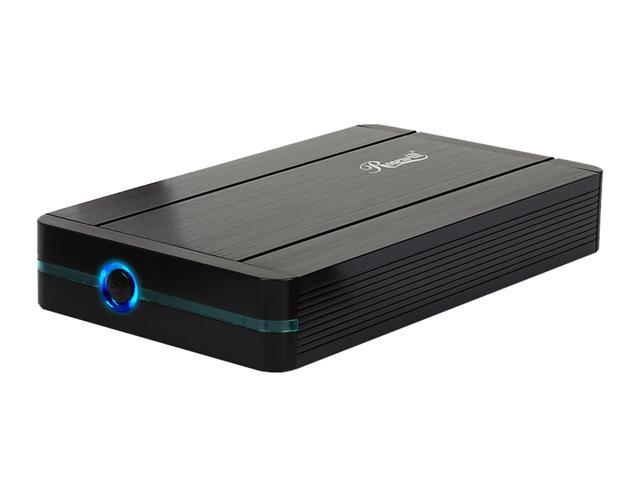 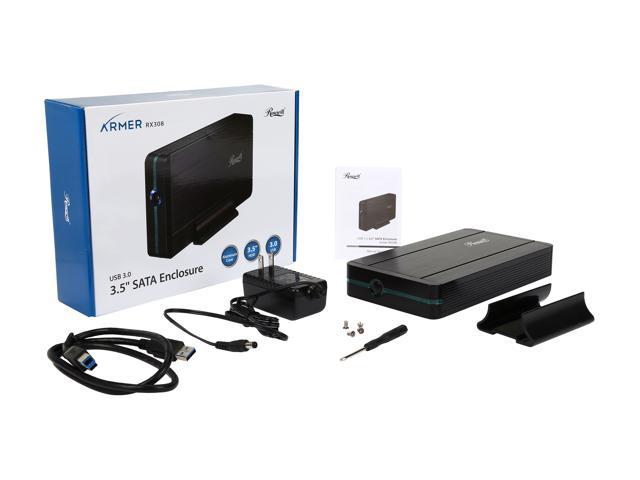 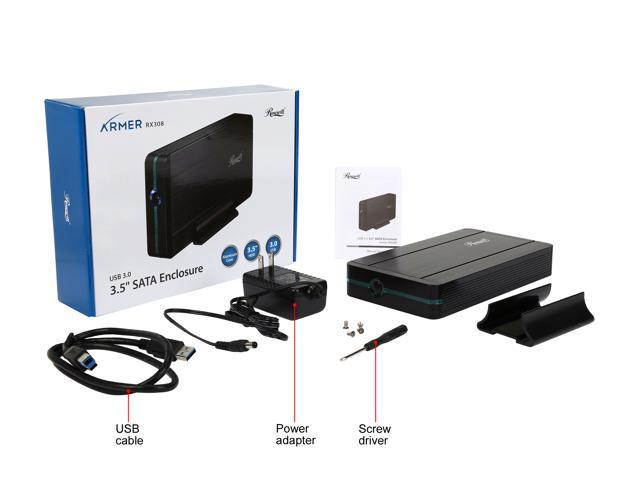 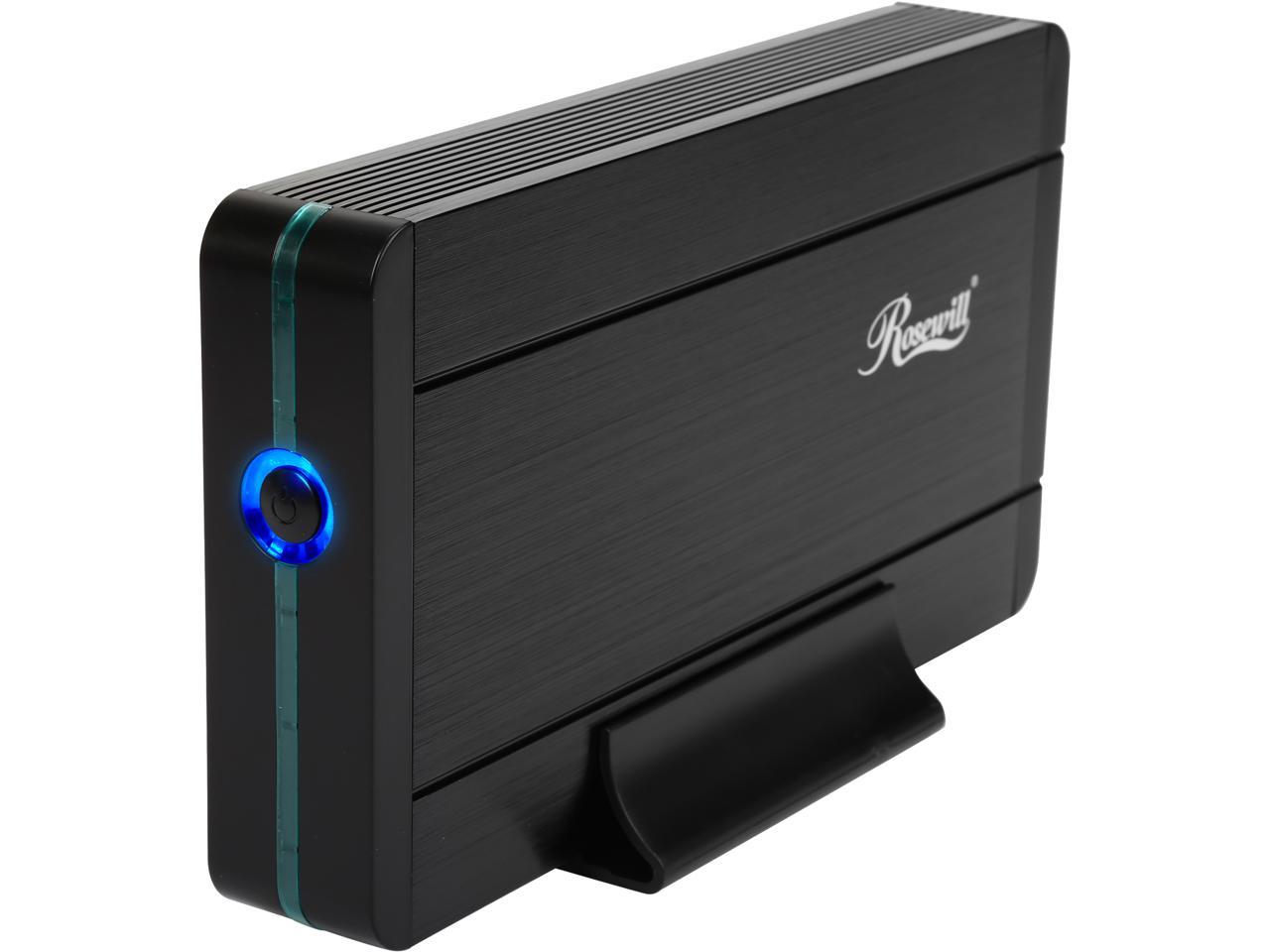 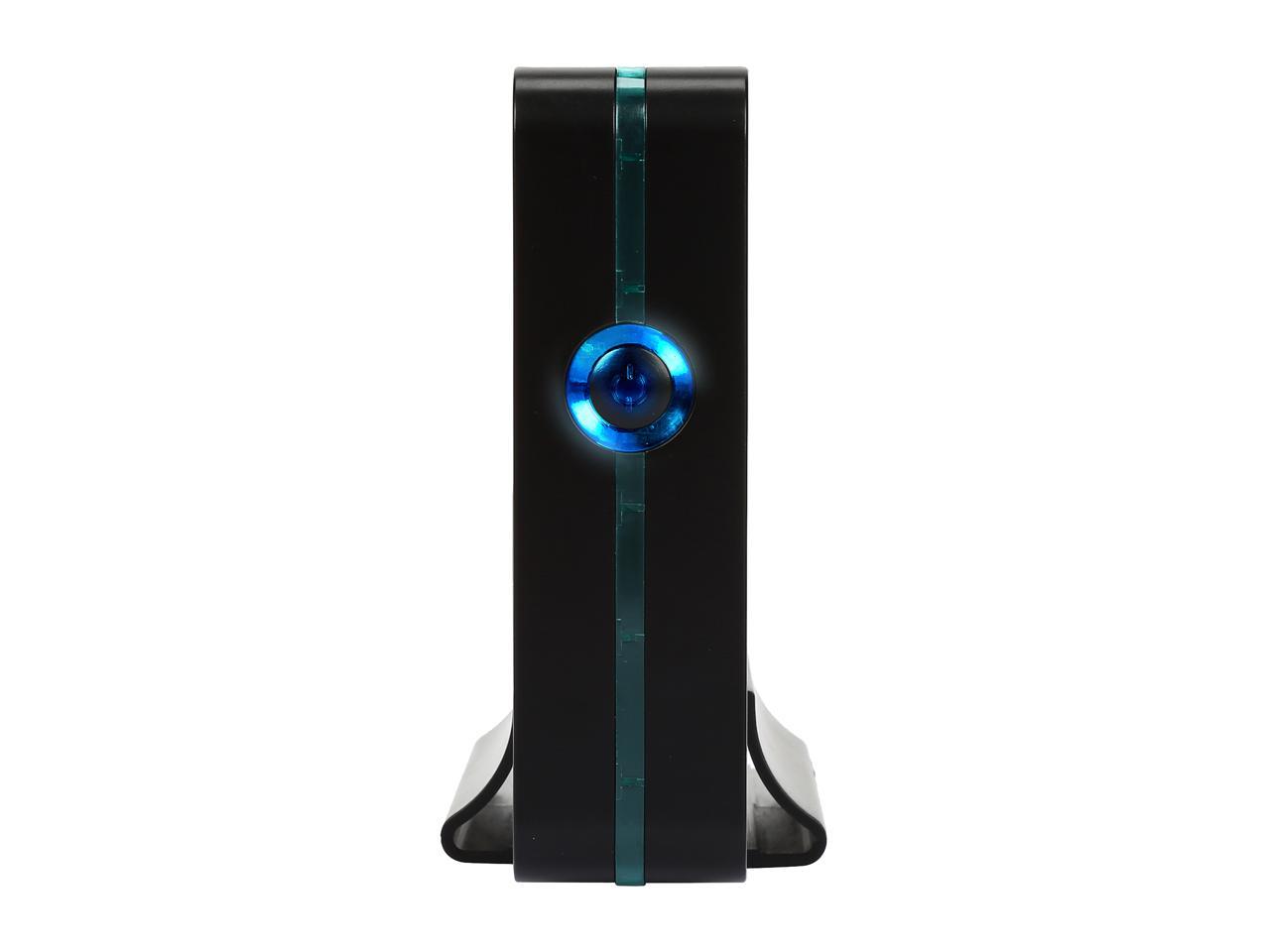 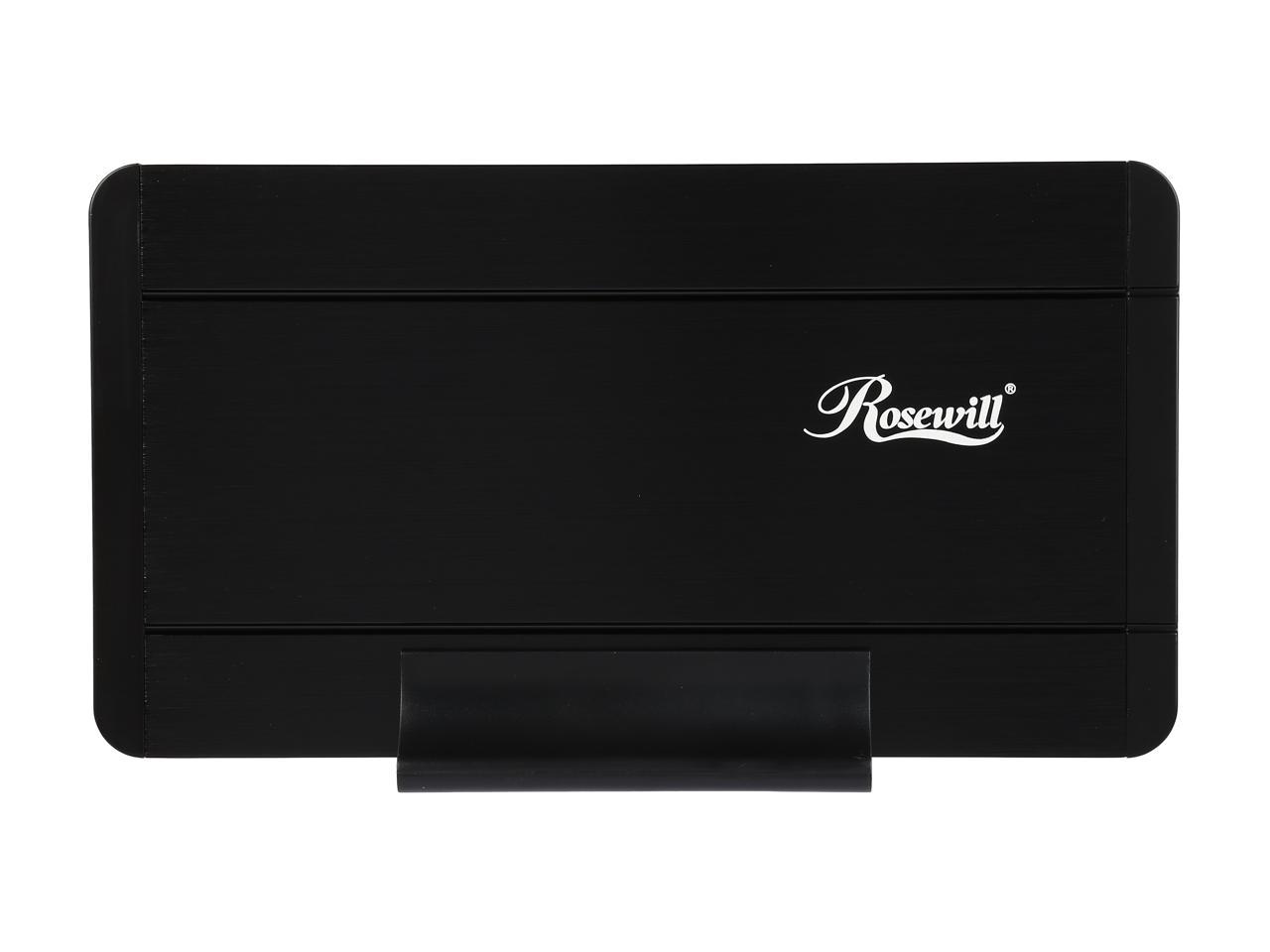 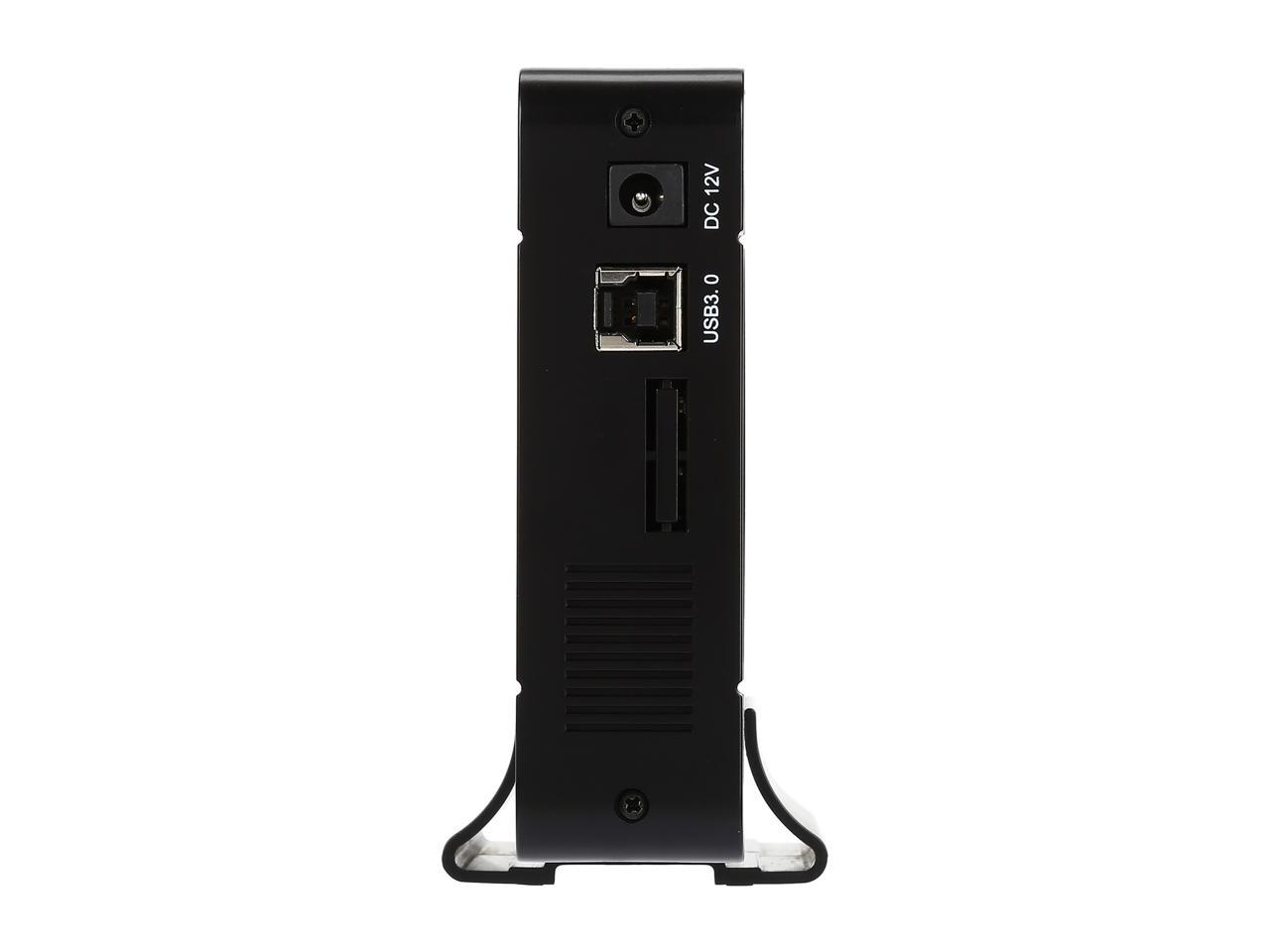 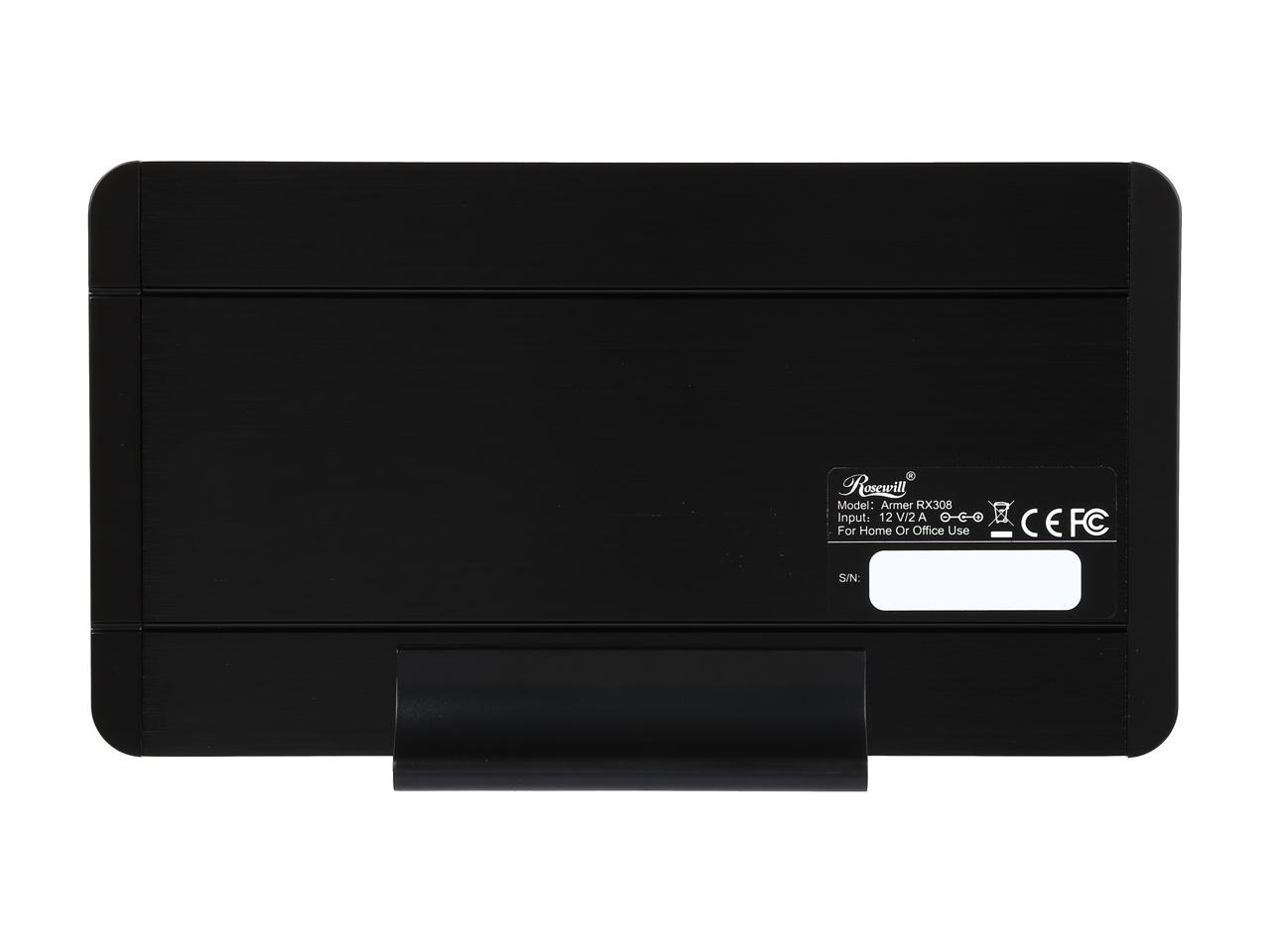 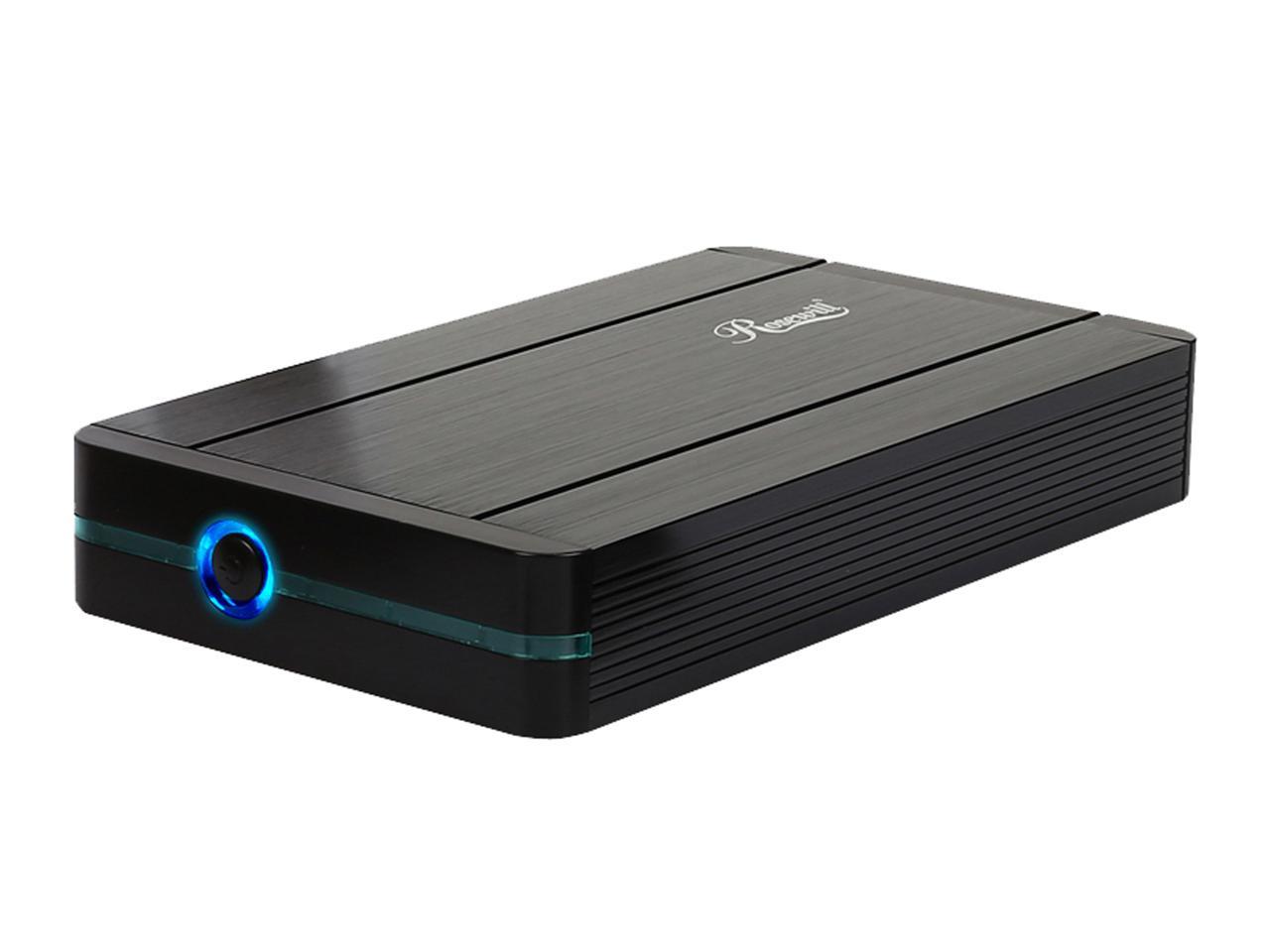 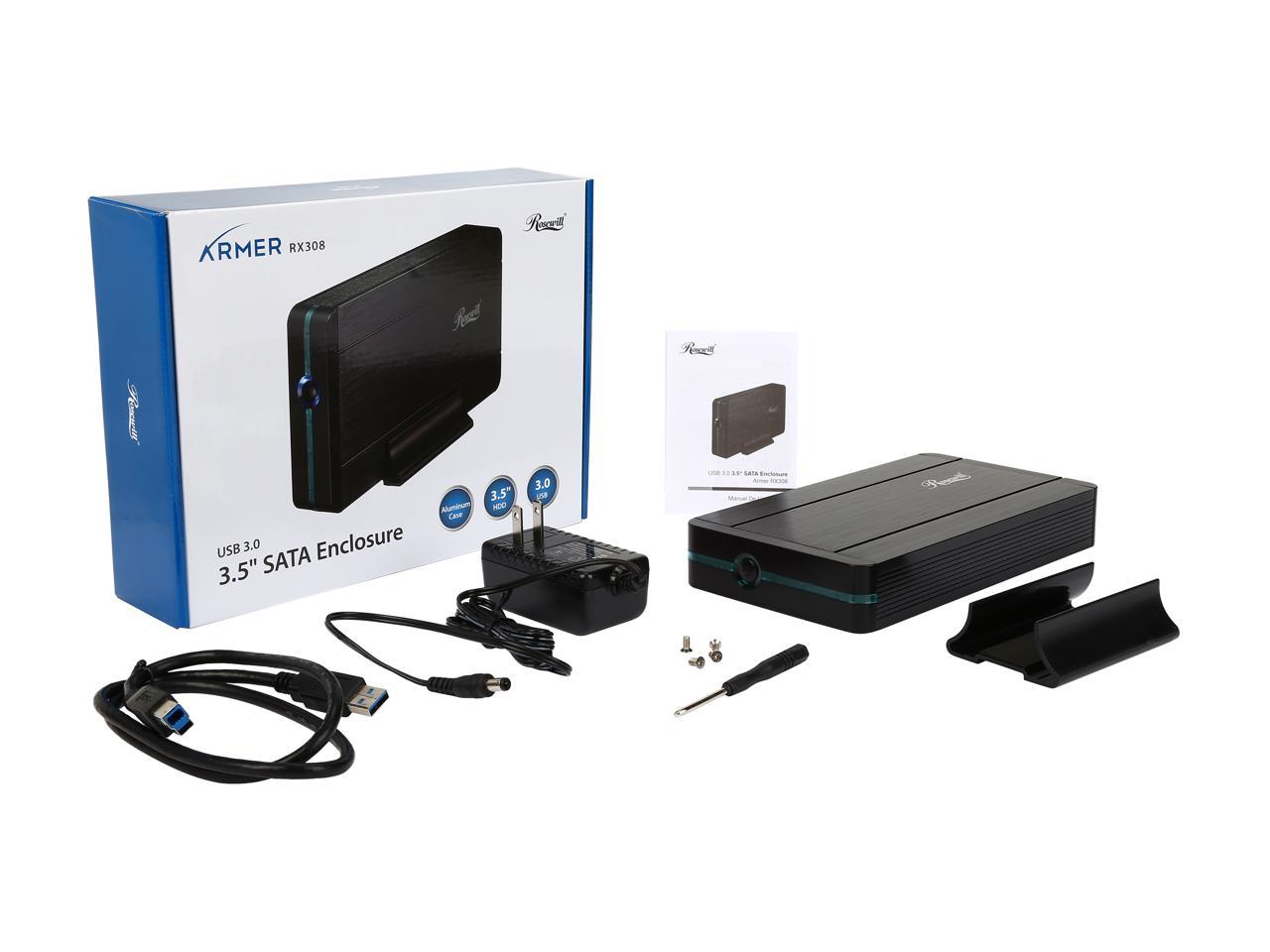 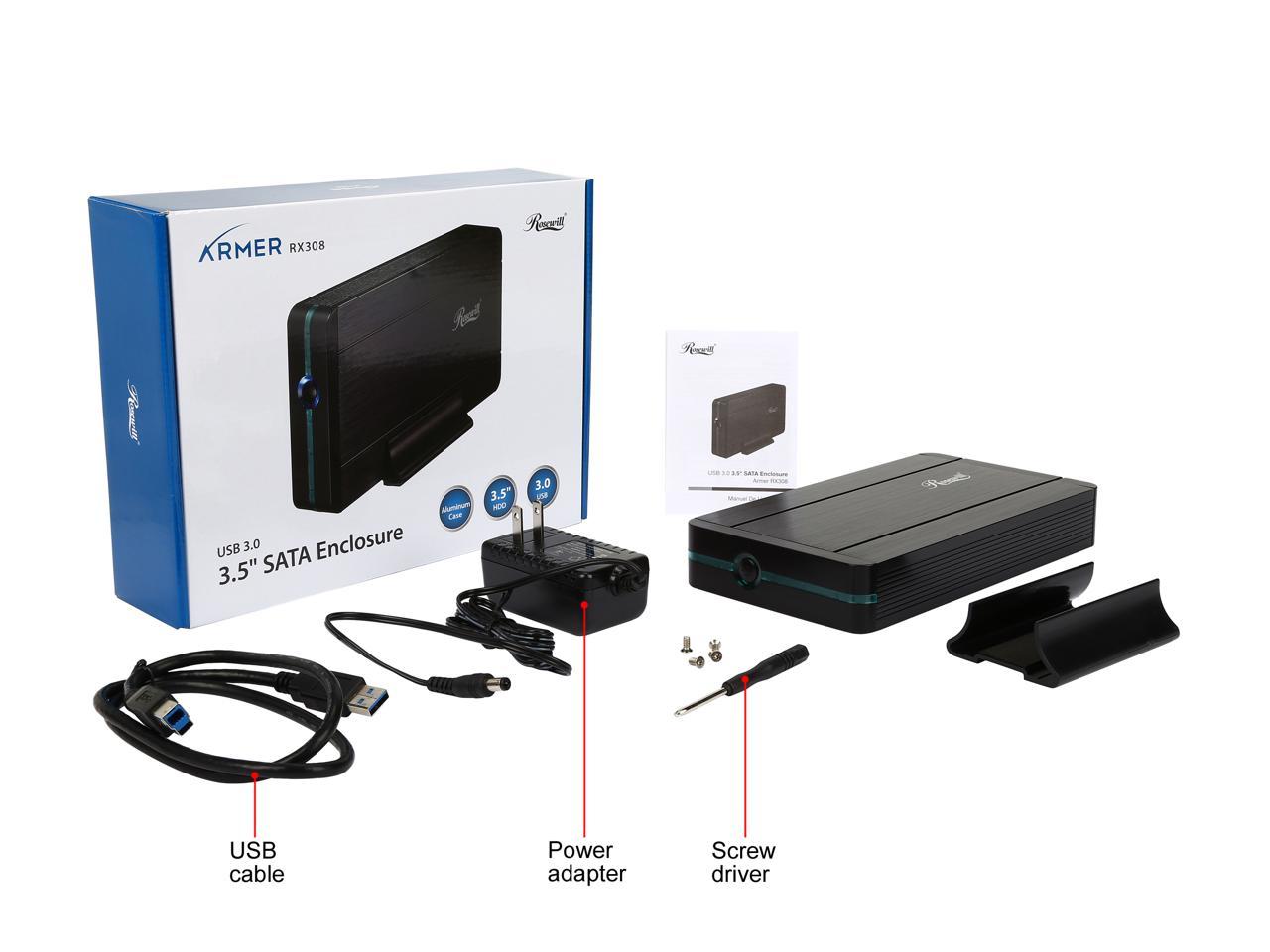 The Rosewill Armer RX308 USB 3.0 to 3.5" SATA external HDD enclosure offers an easy and fast way to create an external USB storage drive. It’s plug and play. Just install a SATA 3.5" hard drive* into the enclosure, then connect it to a computer via the built-in USB 3.0 port, and it’s ready to work. The SuperSpeed USB 3.0 port delivers a blistering data transfer rate of up to 5Gbps, letting you transfer a large amount of data in seconds. The rugged aluminum casing helps protect the hard disk drive, while providing excellent heat dissipation for reliable performance. The built-in LED light indicates power and hard disk drive access – no more guesswork again.

Note: *It supports 3.5-inch SATA I/II HDDs with maximum capacity of up to 4TB. The SATA 3.5" hard drive is not included. Pros: For $20, this is a great bargain. I've paid double that at local stores in the past and the quality was not any better. The setup was easy too. Not sure why some people have had problems. Some have complained about the drive getting too hot. Hey, you don't use this as a secondary drive it's supposed to be an archive drive, which means it's only hooked up for a short time. Just long enough to copy your files. Haven't had any over heating issues at all. Left it on for several hours for testing and it only got luke warm. It has two bright blue LED's that lets you know it's on. I like good bright indicators, no problem for me. Also the on/off power button is on the front for convenience, I like that.

Cons: Can't think of anything bad about this unit.

Overall Review: I would not hesitate to recommend this unit to anyone that needs a good inexpensive external backup drive. If it fails, I'll just buy another one. $20 bucks is nothing anymore.

Pros: solid, aluminum body. I always go with metal instead of plastic. everything is just standard and aswhat is advertised. Nothing special nothing fancy, just simple and easy to hook up and use. One thing that is worth mentioning is that this enclosure has a version for 2.5" HDD or SSD. Pretty amazing to get them as a pair if you happen to have both sizes of HDD.

Overall Review: i will buy the 2.5" case once i have a spare SSD

Pros: Rosewill has always made a above average External Enclosure, for the $20 to $25 price range. Solid Build, Worked out of the box. Quick and efficient. Has AC Power Adapter , not reliant on just USB Power.

Cons: None, it does what it is suppose to do .

Overall Review: IT works as intended, Will buy again

3 out of 3 people found this review helpful. Did you?
Marvin B.
Ownership: 1 day to 1 week
Verified Owner
Nice case with drive frame that eliminates power and signal cables by mating drive to interface board directly.1/27/2016 8:11:25 AM

Pros: Seems to dissipate drive heat well even without a fan.

Cons: The 2 LEDs on front of case are way too bright and very distracting. I covered one LED with black tape directly on the LED and dimmed the second one with a dark blue permanent marker. The cradle bracket for holding the case on edge should have factory installed non-slip feet to prevent scratching area underneath.

Overall Review: I would buy this product again and recommend it for quality and price.

Overall Review: I would recommend this to my friends and family and would not hesitate to purchase again.

Overall Review: Not a fan of very bright LED's but all manufacturers seem to use them. I just don't get the need. Just my personal preference.

Pros: It works with my 3gb Toshiba HDD without issue. Some of the reviews of HDD enclosures here on the egg have said that the SATA-USB3 bridge didn't recognize drives of that size. The aluminum case helps to reduce HDD temps compared to plastic. I got 175mb/s peak transfer speed with this enclosure, using the Renesas USB3 chip on my P8P67 Deluxe motherboard, measured with HDTune. The same drive gets about 195 mb/sec on the motherboard's native SATA3 port.

Cons: Even with the aluminum case, the drive does get a bit toasty with my 3gb Toshiba 7200 RPM drive. I've seen a peak of 46C (SMART reported, 78F ambient), though right now it's at 40C, halfway through a backup with True Image 2014. I would not be happy with temps in the 40s for day-to-day operation, but on a backup device that won't be seeing a huge number of power-on hours, it's acceptable. It still runs cooler than my WD Passport 2gb (2.5 inc h drive, in a plastic case), and is far faster. One of the "green" type drives may be better on temps if that is important to you, but they're slower, and the aggressive spin-down has been reported to wear the drive out sooner too. I've never had any experience with the "green" 3.5" drives, so YMMV.

Overall Review: Keep in mind that this review is based only on a week of ownership, and is based on the "initial" product quality.

Pros: I found this to be a nice extra for HP desk top I purchased from New Egg a wile back, I have a drive partitioned half for extra general files, the other half for system back up in the event of a crash. it was easy to assemble. Now this was not an expensive but it is serving my needs nicely.

Cons: The case was a bit tight when opening and reassembling

Overall Review: I would have liked the enclosure to have a fan but for the amount of time I use this drive it stays acceptably cool. If this was to get heavy use I would have purchased a different case. I did read in some other reviews that the drive was slipping out of the connector, I do recommend that all four mounting screws holding a 3.5" be used or have a proper adapter if 2.5" drives are used. I would not hesitate purchasing this product again should the need arise.