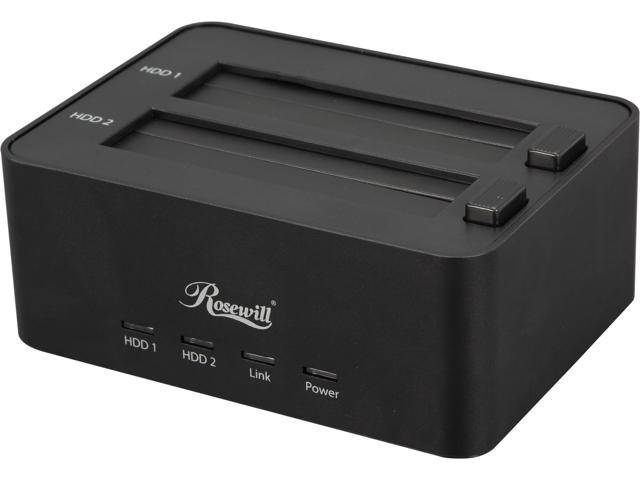 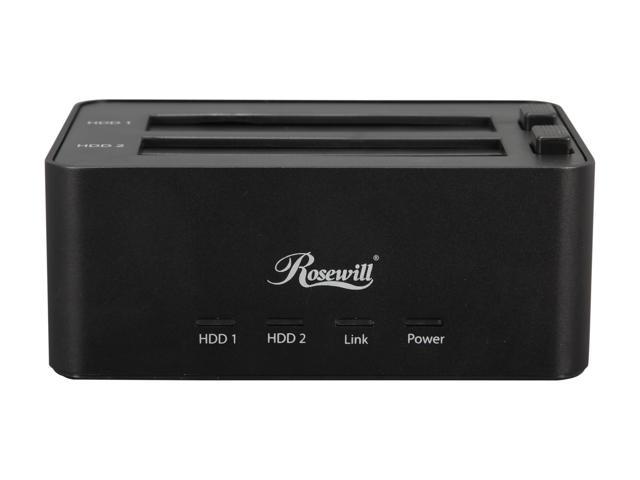 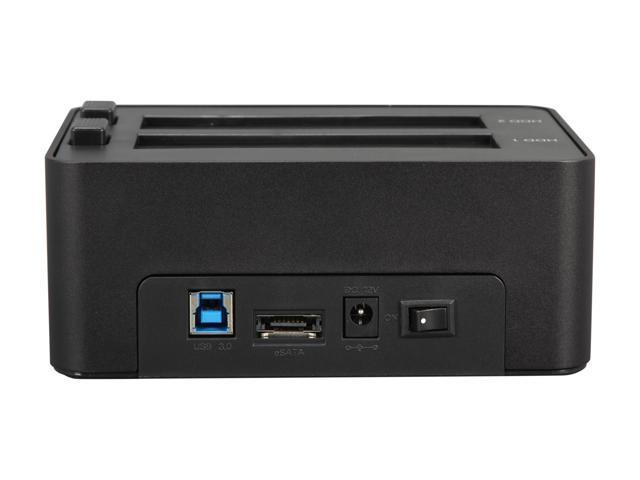 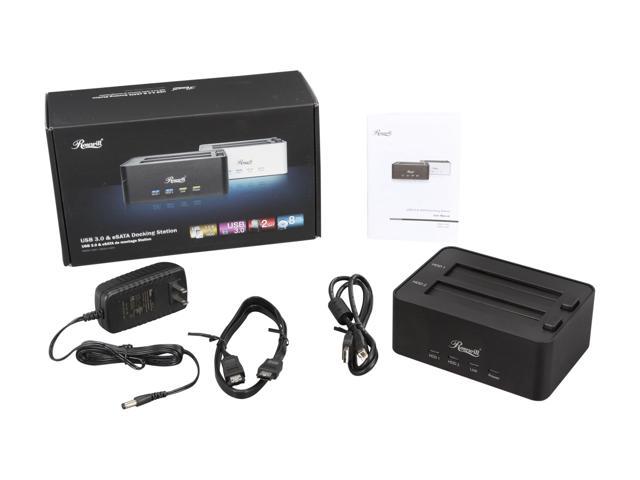 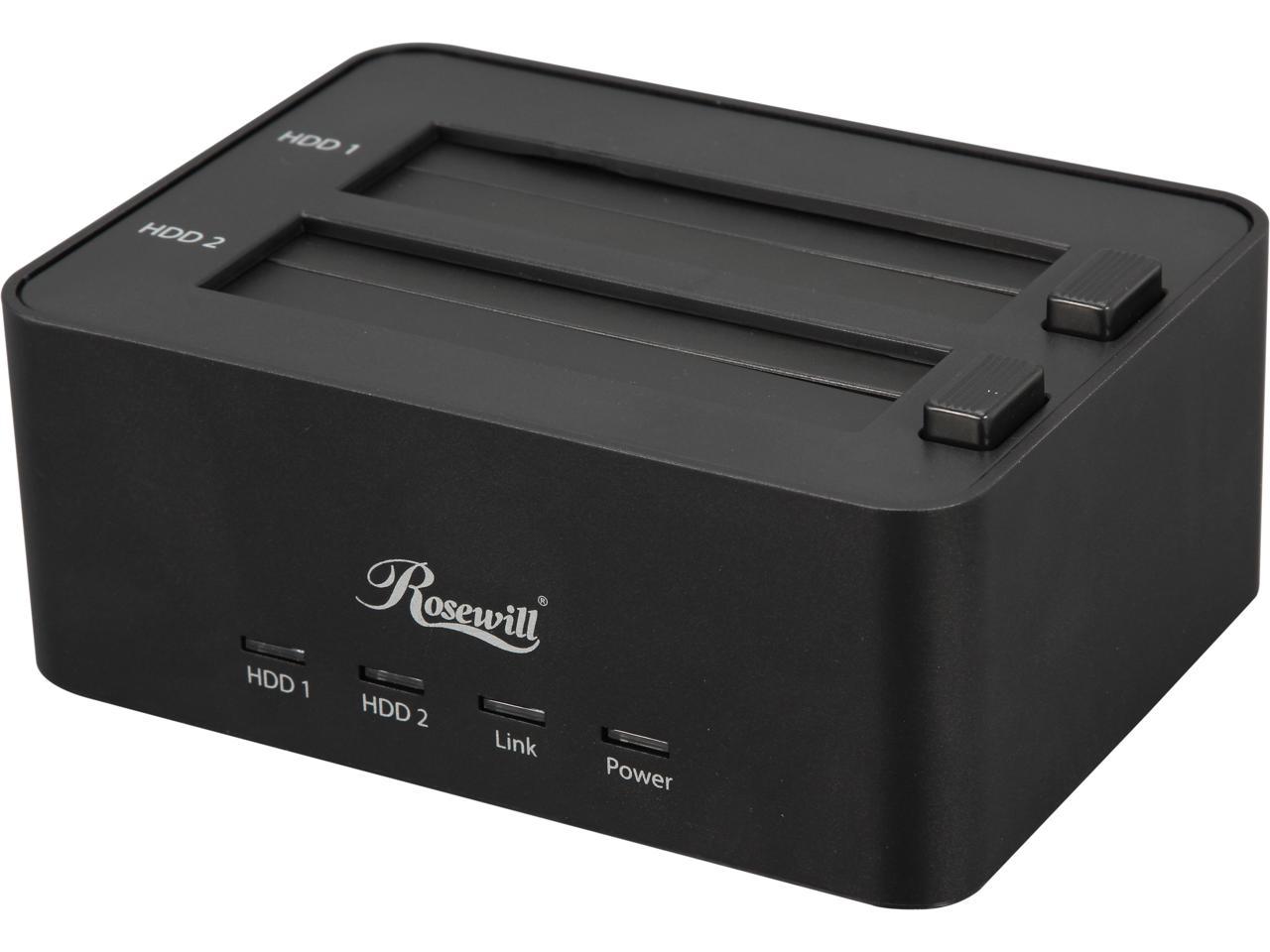 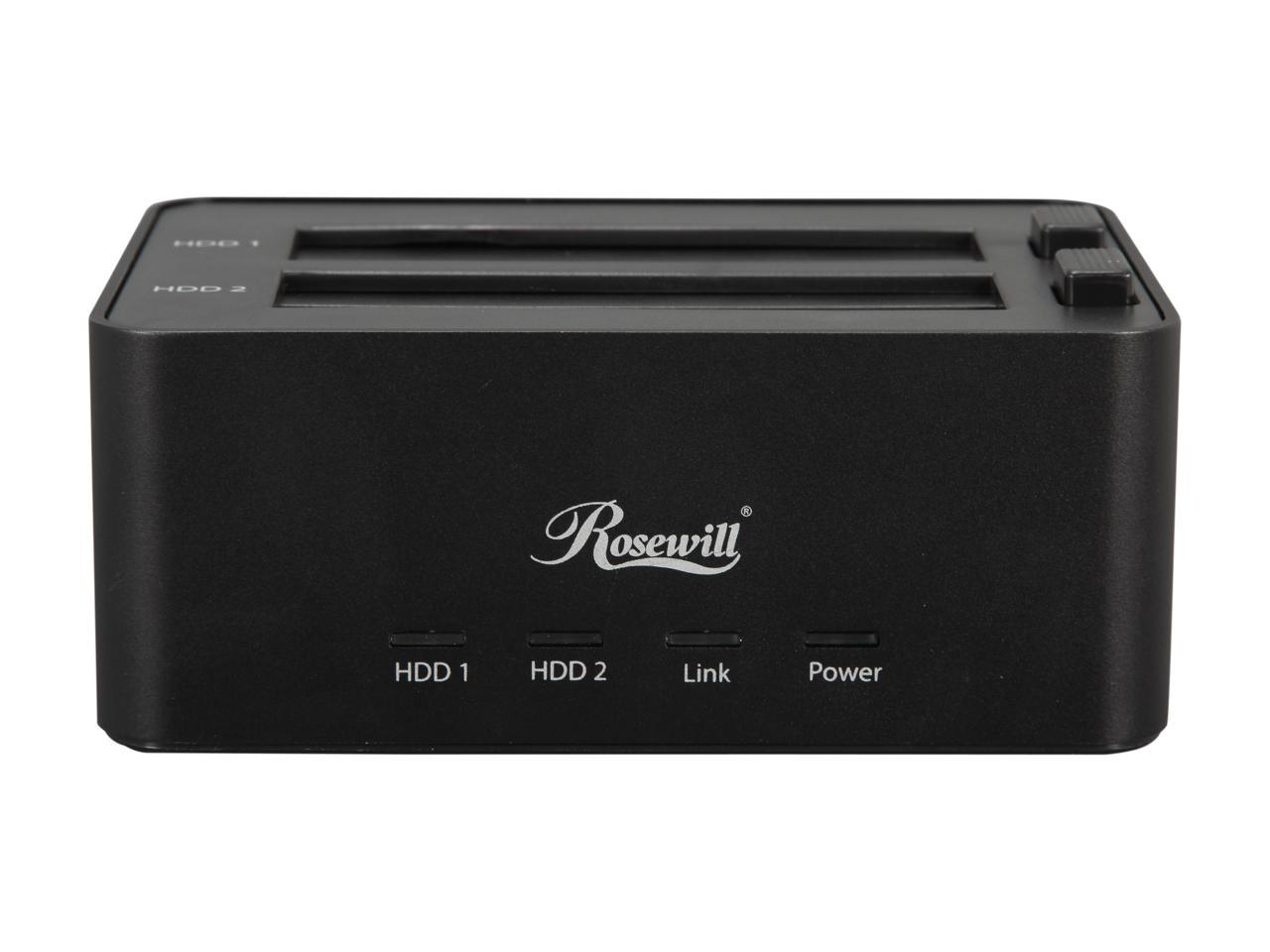 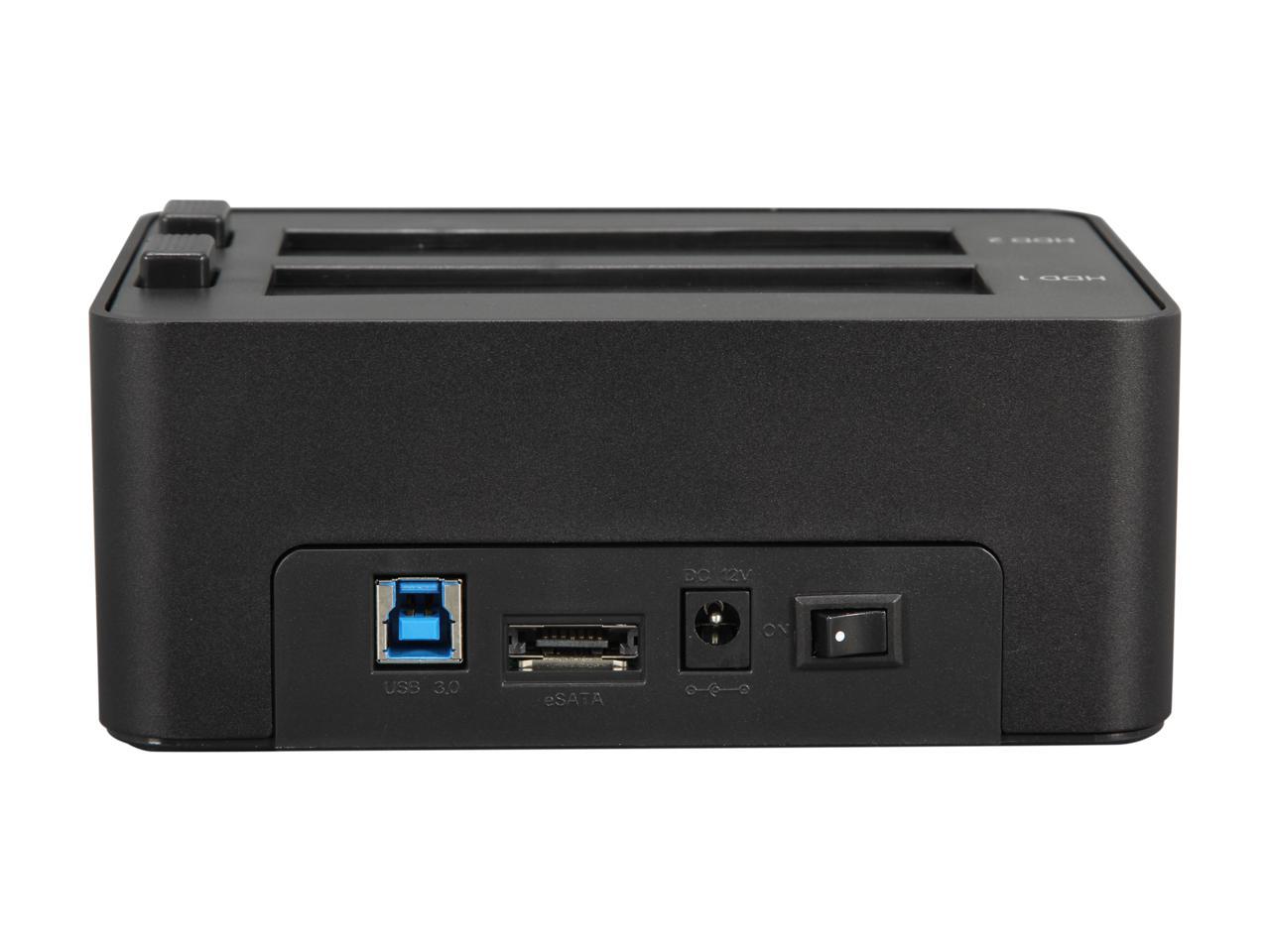 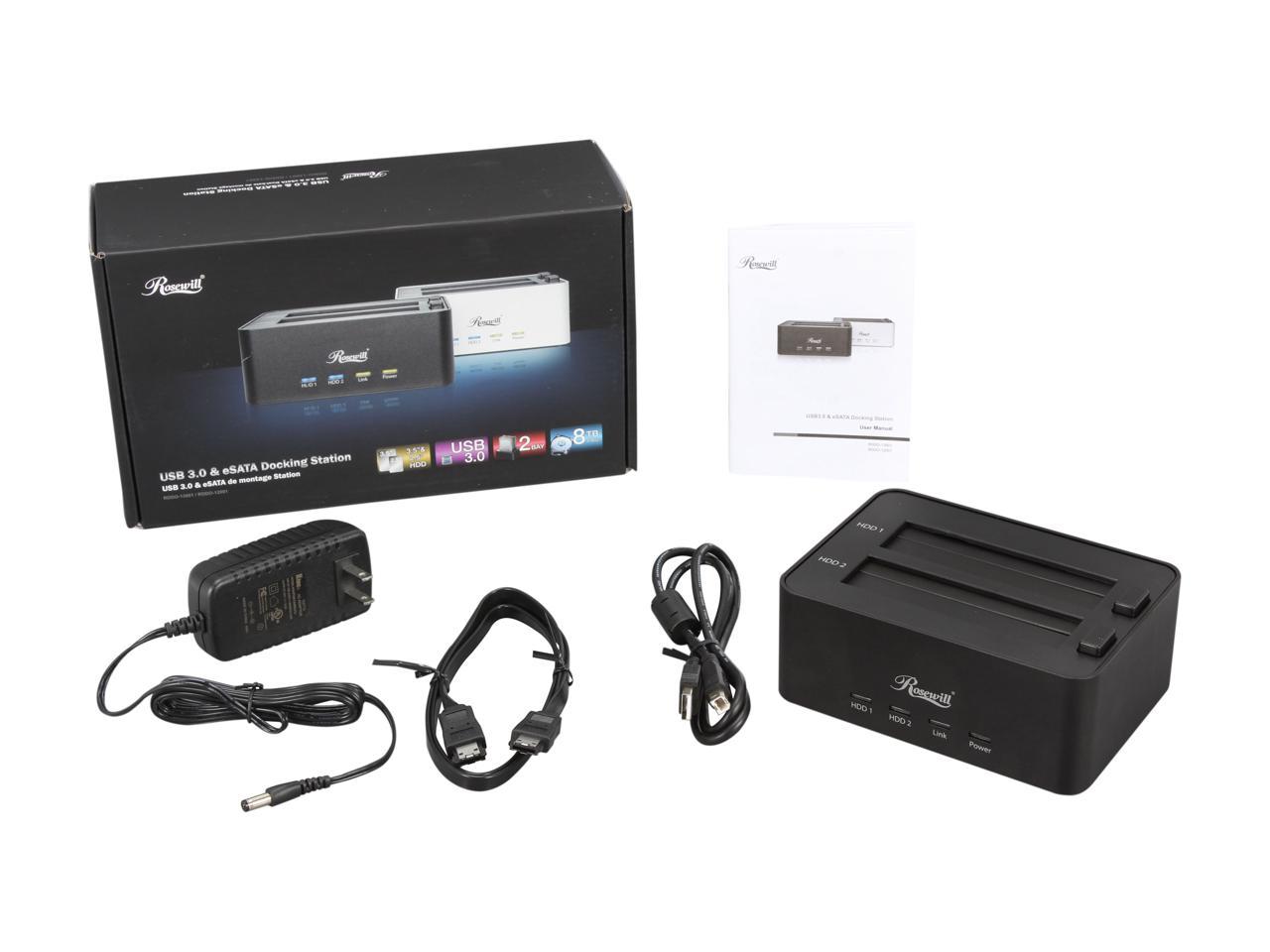 Learn more about the Rosewill RDDO-13001

Pros: I purchased the Rosewill RDD0-13001 to extend the functionality of a new case I purchased, thinking that the extra HDD slots would help in transferring data from my old system to the new. On a positive side, the docking station is built very well and provides for two HDD slots with both USB3.0 & eSATA cables included.

Cons: Now the negatives... First of all the HDDs must be perfectly aligned to have the docking station recognize them. At first glance I thought the system was defective, but after some trial and error I realized that there are no guides to assure that the drives connect firmly to the interface. Next I noticed that both docking bays are recognized by the OS as one attached device, this in my opinion is a design flaw, when you want to ejected one device by using the "safely removing hardware" tray icon you are forced to disconnect both. Of course you can use the eject button on the docking station itself, but this would leave the drive in motion and unparked when ejected (bad idea). In addition, from time to time the docking station will loose its connectivity between the OS and station and reset the adapter intermittently. Once this happens, the drives automatically stop functioning and are forced reconnected ending both coping or formatting actions in process.

Overall Review: Having used this device for several months now, I would recommend looking for another one which functions better under real world conditions. The RDDO-13001 docking station appears as an ill conceived device with many design flaws.

Cons: This product is junk and their tech support is useless. When using the esata connector, the device shows up as a port multiplier but it intercepts the device identify commands to whichever drive is connected first ( the second drive, if installed, works fine ), and mangles the responses so the drive appears to have a bogus firmware revision that does not use 4k sector sizes, does not support NCQ, and does not support SMART. This results in terrible performance when trying to access both drives at once and the inability to monitor the health of the drive. When contacted about this issue their tech support first claimed they had no product that supports two drives, then that this product does not contain a port multiplier and so does not support two drives via esata ( it most certainly does ), and finally said the only thing they can do is warranty replace the device.

3 out of 3 people found this review helpful. Did you?
Manufacturer Response:
Dear Valued Customer, Thank you very much for purchasing this unit. We strive to provide the most reliable and highest quality products to our customers. Thanks for the feedback we will pass it along to our QA and Design teams. Phone: 1- 800-575-9885 Email: rma@rosewill.com Email2: techsupport@rosewill.com We look forward to hearing from you. Thanks, Rosewill Customer Care
Michael L.
Ownership: 1 month to 1 year
Verified Owner
Perfect10/13/2013 2:58:32 AM

Pros: You can Initialize a 3 TB drive which is what I wasn't sure if it would do. It works fine, just put the drive in and reboot the computer. Windows 7 sees it just fine plugged into the eSATA.

Overall Review: I needed this to set up and test hard drives because all the other drive bays on my computer were full. It runs at full the full speed of the SATA port it is plugged into.

Cons: See other thoughts. Does NOT pass S.M.A.R.T data through. Transfer speeds are pathetic even on esata. Sometimes it doesn't detect the drive and I have to reboot my computer. Its hard to seat the drives properly to make connection. It apparently does not work well with 2 drives at once? Isn't that what its for?

Overall Review: I felt I had to re-post this review because for some reason Newegg set it to 5 eggs which is completely wrong. I'm not sure what happened there, but I would appreciate it if someone would remove the 5 egg review as it is invalid. I got this drive dock to diagnose and restore drives for customers. I wish I had never gotten it. I can not see the smart data of the drives using the software I have been using for years. And the transfer rates are horrible through both usb 3.0 and esata. I restored a image to a ssd for a customer and it was taking for ever with this dock, going at about 100 MBps. I connected the drive directly to my esata port with a simple cable and the drive was suddenly going at well over 400MBps. And I am now afraid to connect 2 drives to it at once because I have read that not only do 2 drives not work with esata, they have problems even with usb 3.0. Get the single drive version as I think the problem with this one is the extra circuitry inside it for 2 drives is the problem. I have the usb 2.0 single drive version of this and it works perfectly, only problem is usb 2.0 is slow for restoring customers drives. That's why I wanted esata, but apparently this particular product is not the solution I need.

2 out of 2 people found this review helpful. Did you?
Manufacturer Response:
Dear Valued Customer, Thank you very much for purchasing this unit. We strive to provide the most reliable and highest quality products to our customers. Chipset limitation only applies to SATA, through USB you can read and write to both drives at the same time. Please contact our support team to assist you with warranty options. Phone: 1- 800-575-9885 Email: rma@rosewill.com Email2: techsupport@rosewill.com We look forward to hearing from you. Thanks, Rosewill Customer Care
Robert V.
Ownership: less than 1 day
Verified Owner
DOA1/31/2014 8:44:10 AM

Cons: Mine arrived DOA, not able to spin up a new drive in either slot. (and I tried two brand new Hard Disks.)

Overall Review: We'll see how I feel once I get one that works!

Pros: I've had 1 or 2 drives running in it for 11 months now. Main use is for movies and music on my home network. But it does get the occasional move to different computer for backup and/or clean-up. I forget its not a system drive until I get a new, bigger drive.

Cons: None. Been working 24/7 for 11 months as a central movie and music library for a home network. No issues with installing on other computers. Never disconnects.

Overall Review: All my systems are WIn 7. Currently have a 2Tb and 1Tb 3.5" drives (WD). Currently shopping for a 4Tb drive maybe two during this BLACK Month Sales...and YES it /they will go right in this wonderful unit.

Pros: The speed is amazing. I am able to plug 2 hard drives in and see them separately. Drives stay cool.

Cons: Every now and then, the USB will drop out and windows has to find the drives again which is the reason i gave it 4 stars. More of just a temp pain. nothing major.

Cons: Only one drive on eSata. Slow drive to drive copy over the USB ATA ATAPI Bridge.

Overall Review: Bought the open box one before I saw the new one. Stuck 2 2-gig Seagates into it and turned it on. Both drives popped up on the desktop right away. Like I said slow drive 1 to drive 2 copying. About 60 gigs in 30 minutes. Somewhat faster drive 1 or 2 to an internal sata. About 88 Gig in 11 minutes. The drives both sleep in USB mode when the computer is put to sleep. Which is great. Otherwise they spin and stay warm. For a little over $20 bucks I''m happy.