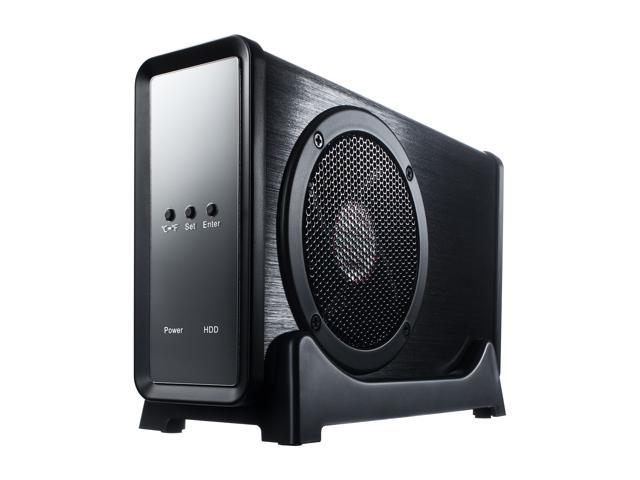 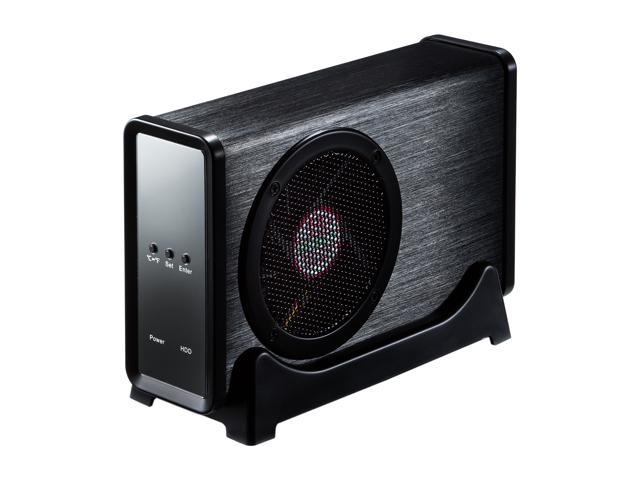 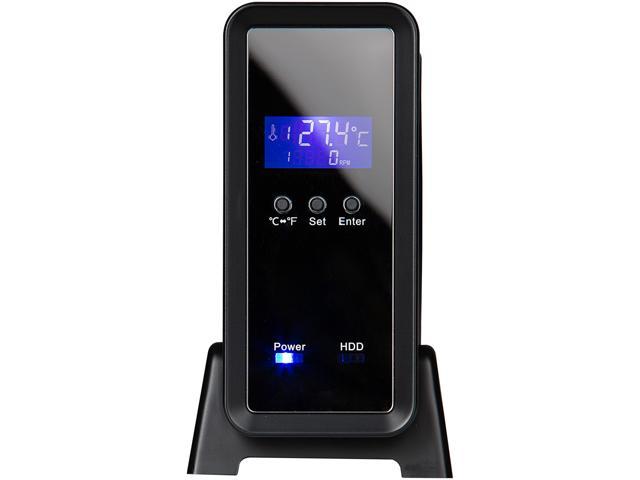 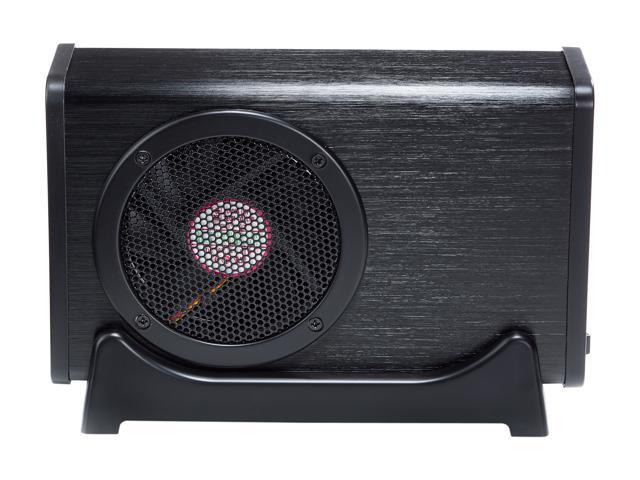 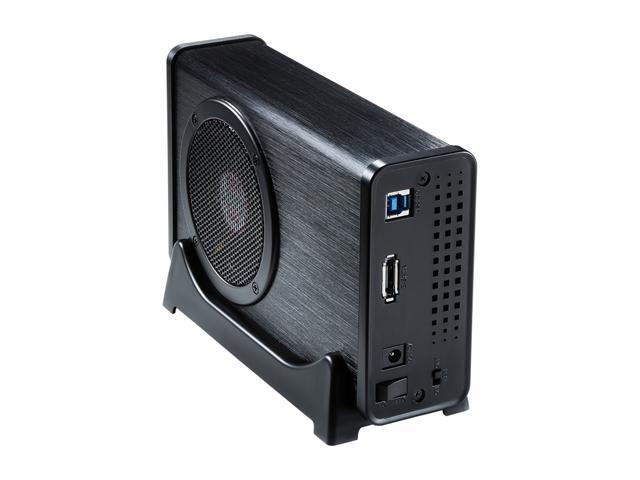 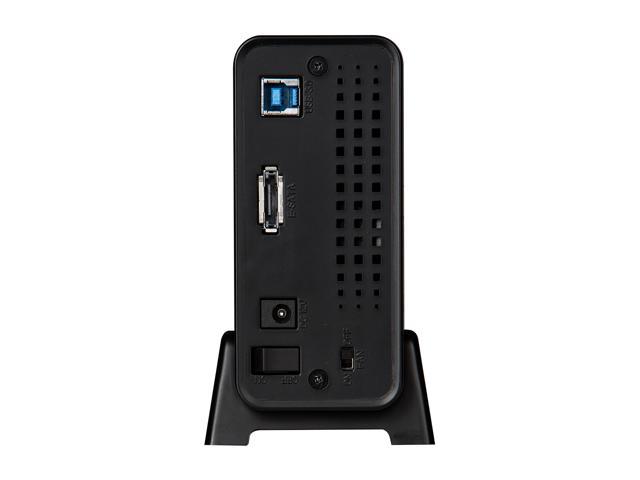 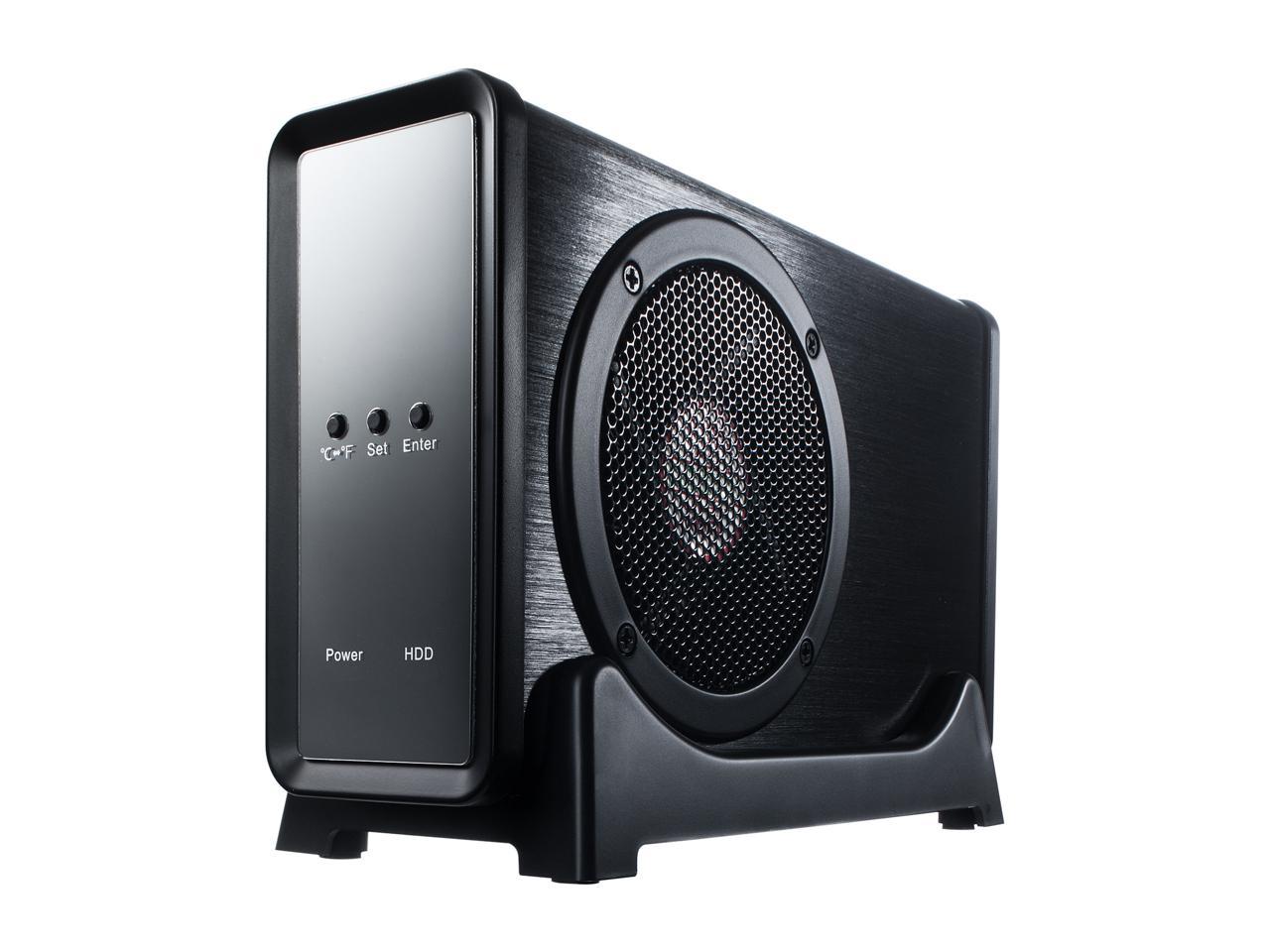 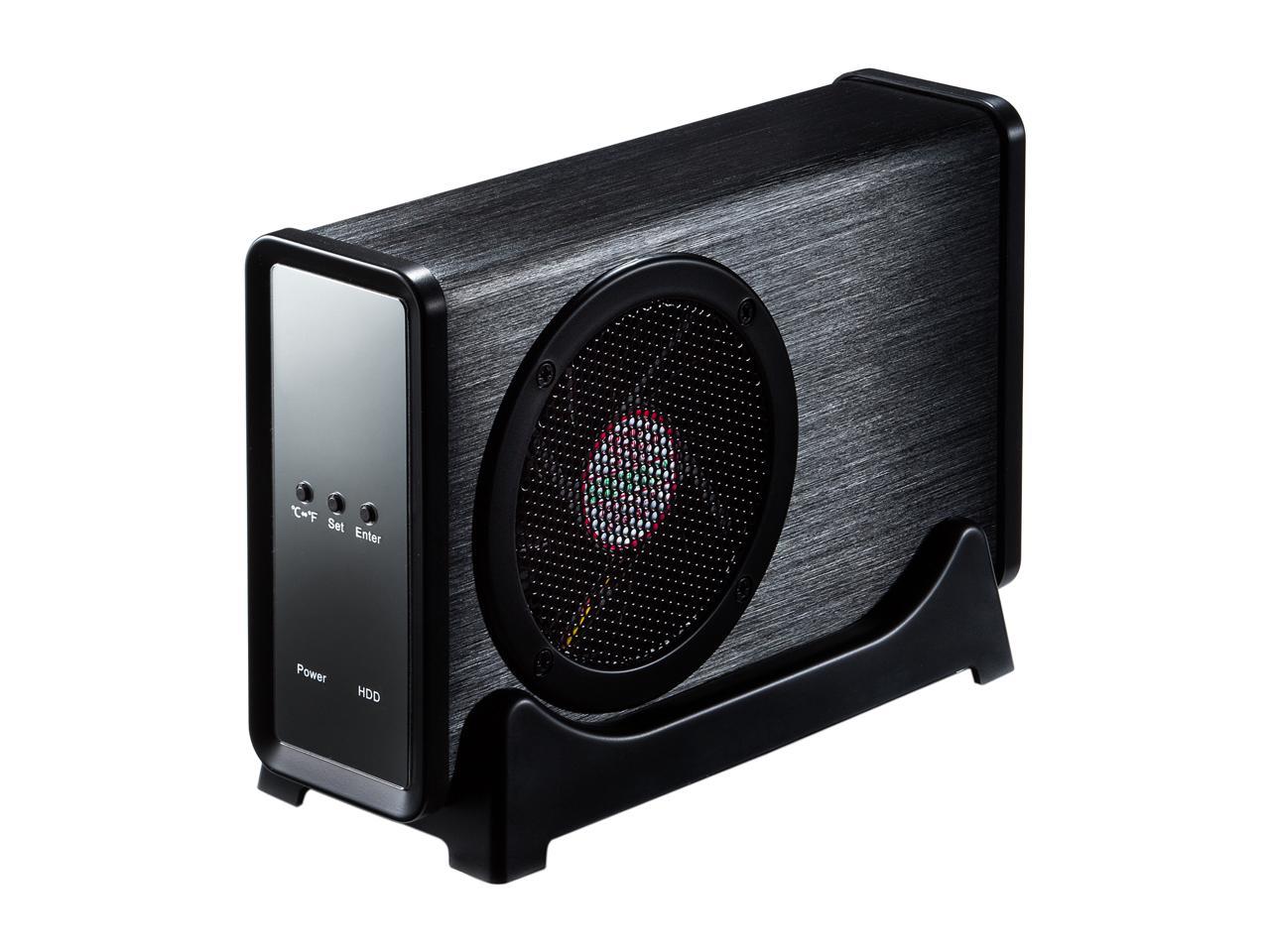 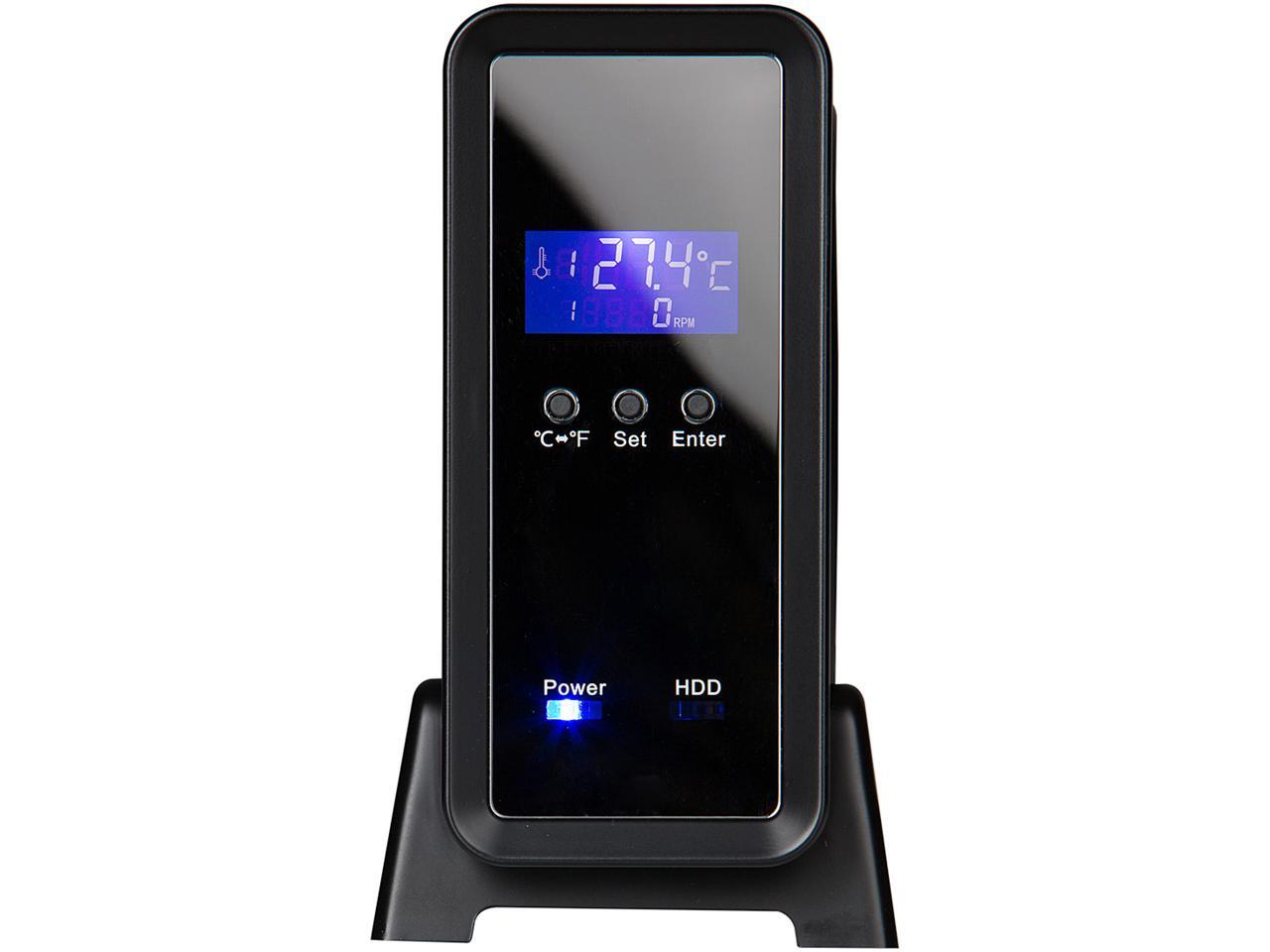 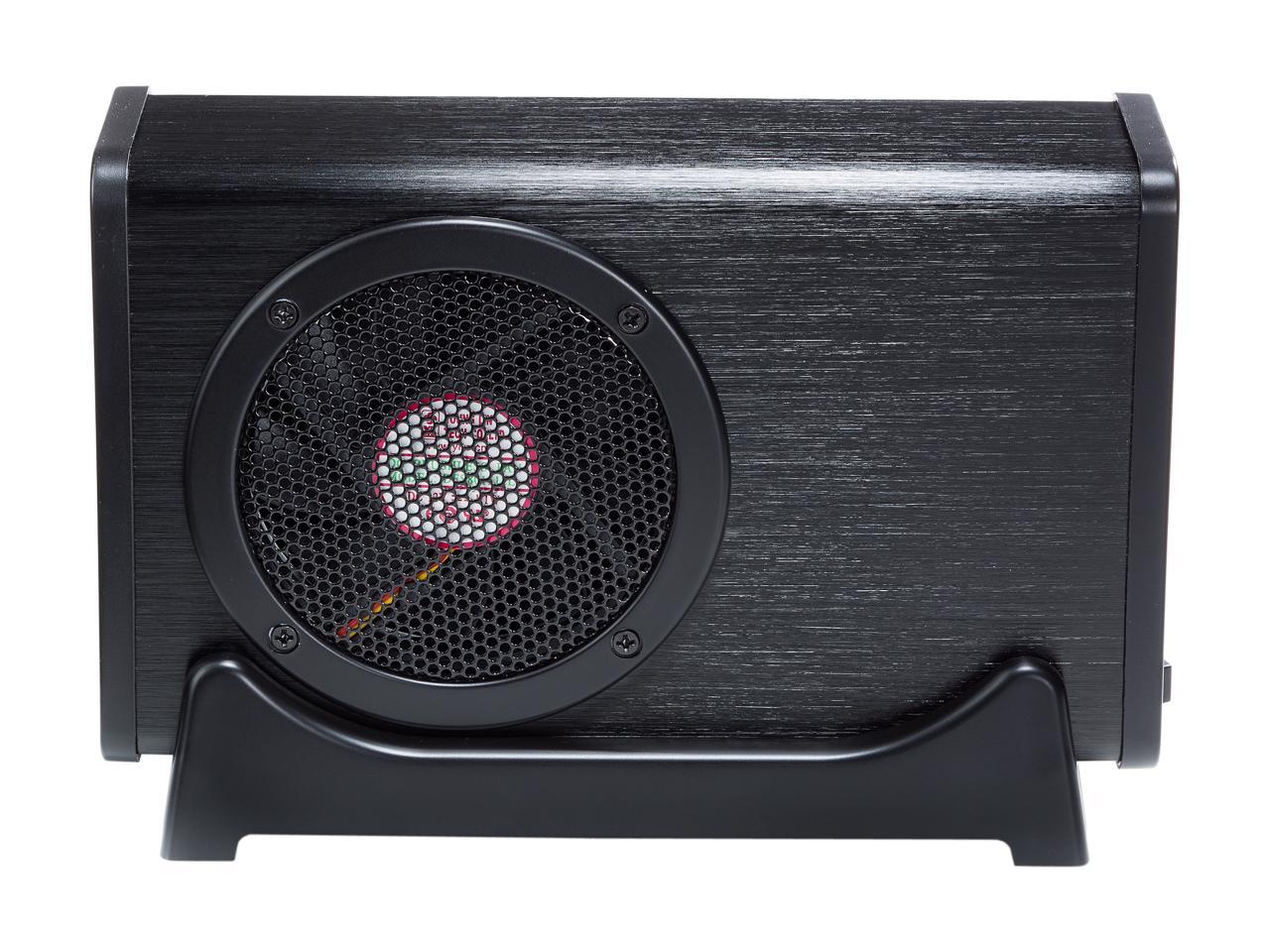 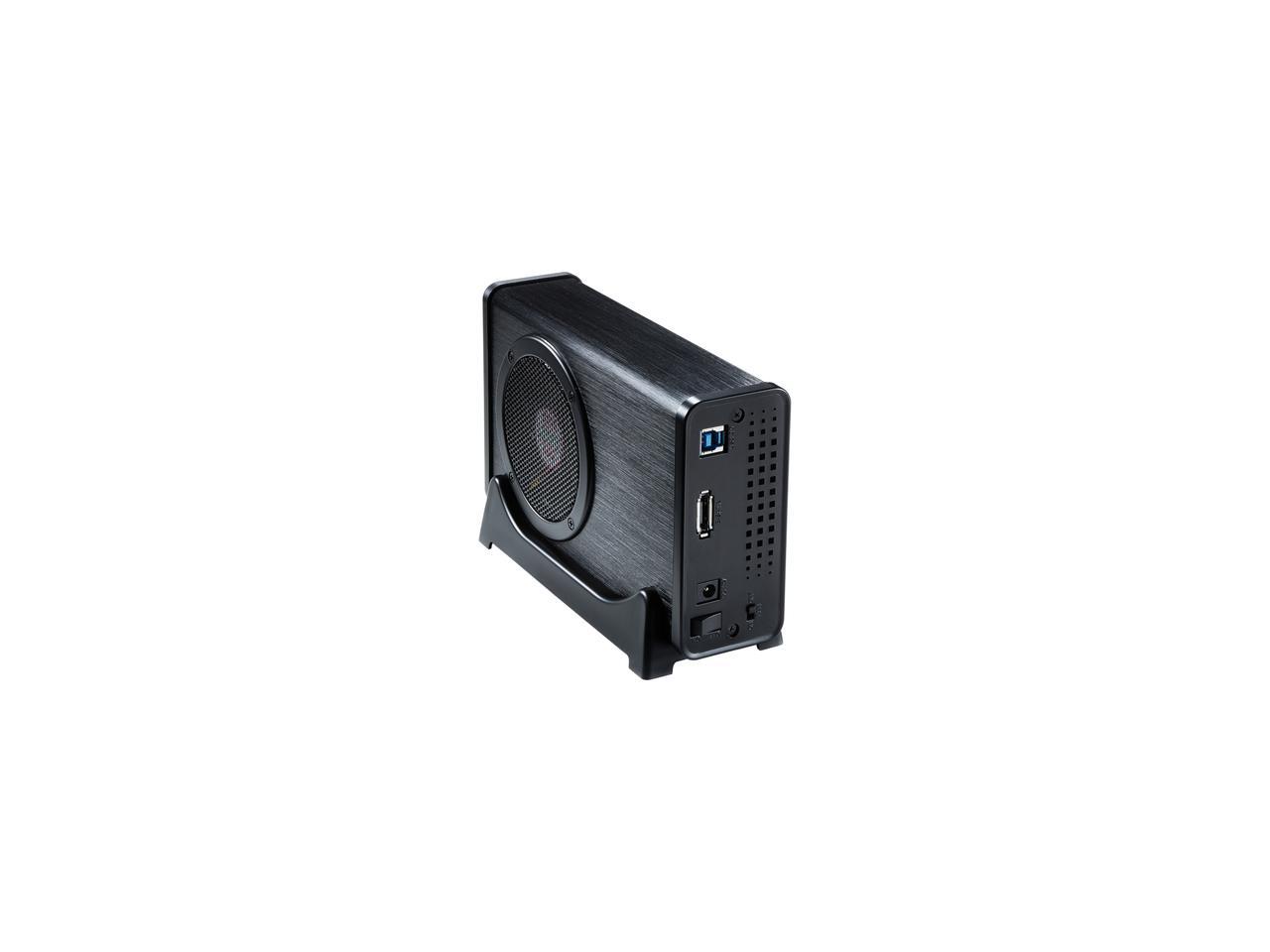 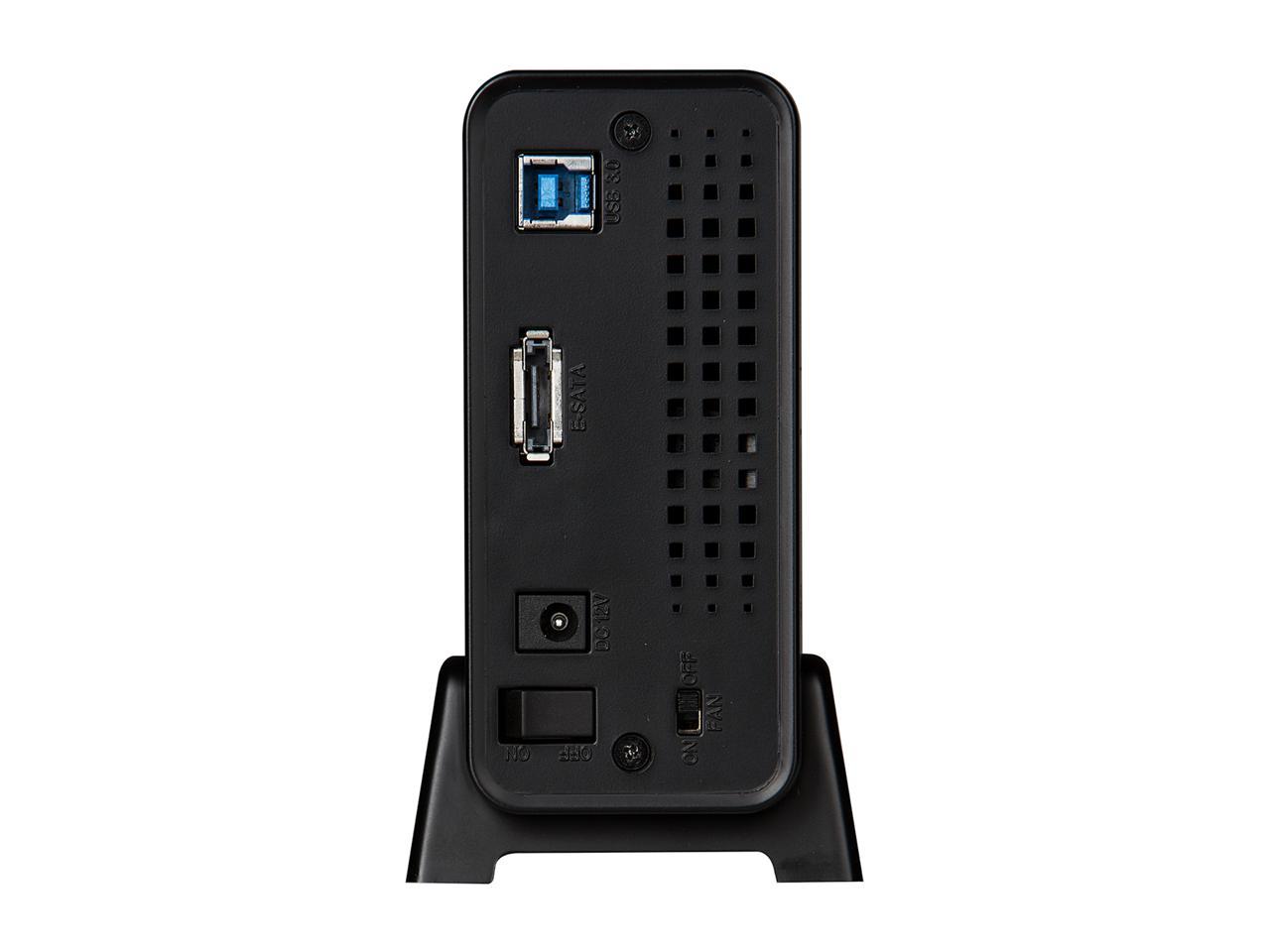 How do I Install It?

Slide both sides of your hard drive into the grooves of the case for an exact fit. Both sides must be inserted into the grooves correctly for a secure fit.

Why Should I Choose the Armer Enclosure?

How Does it Work? How Well Does It Perform? Learn more about the Rosewill RX304-APU3-35B

Pros: (mostly) brushed aluminum housing, dark anodized; good-looking & strong 80 mm fan, very quiet fan has it's own power switch; niuce option, but I always keep it on anyway roomy interior (good airflow) not only is this enclosure cool, it is also cold for the HDDs; very rare to see HDD temps over ~33 degrees C USB 3.0 and eSATA III connectivity (mostly) easy assembly (mostly) easy to swap HDDs eSATA connectivity is awesome & allows access to full SMART functions/data eSATA also allows this to be a very reliable boot option running at full specifrications USB 3 speeds max out the HDD capabilities at very nearly all tyimes This is 2nd one of this model; bought the first in Sept 2014 and it works like a champ nearly every day.

Cons: Lighted front panel display is ridiculously bright; it will light up a dim room and hurts the eyes in a low-ambient light environment. This seriously requires a dimming function. I solved the problem by taping a piece of aluminum foil so thta I can lift it to look at the display when need, and it cuts the light for the 99.5% of the time I have no need of any of the display function. The aluminum is brutally sharp on many interior edges. You can slice yourself open like a razor when installing & swapping HDDs. Once the end caps are on, the danger is contained. The temperature sensor needs to be placed carefully to get accurate readings. I used heavy aluminum foil to covder the sensor & taped it to the HDD to press it against the metal of the HDD itself ... this transfers heat more accurately so that the sensor of the enclosure and the internal HDD sensor match. Otherwise, the enclosure reports one or two degrees cooler than the actual internal heat as reported by the HDD itself. Power block takes up ridiculous amount of space on power strips & outlets. Usually blocks at least one other outlet and often two; very poor design and terribly annoying at times.

Overall Review: I still gave this 5 eggs, despite the cons. While annoying "features," the enclosure itself performs solildly, transfers data at the top speeds the HDDs are capable of, and has remained silent and cool for 2 1/2 years of near-continuous service. Should the fan die, it's easy to find a replacement. I make sure to clean it out every 3 or 4 months, so no dust/cat hair/ etc. build-up & has stayed silent. I have swapped out a couple dozen HDDS from 500 GB up to 4 TB, and all have worked without flaw (several models each from Western Digital, Toshiba and Hitachi). I have also installed SSDs in this, with a bit of creativity, cut strips of aluminum from beer cans and a hand-drill to manufacture temporary conversion brackets from 3.5" to the 2.5 " form factor of the SSDs. Also worked for a laptop HDD in a pinch. Pretty happy with a versatile & reliable product. I can ignore the annoyances, which I'd maybe take a half egg off for, but am happy to round up to 5 eggs because mostly it just sits on my desk and works.

Cons: eSATA started going flaky about 6 after about 5 months. I should have returned it then. USB still works, but eSATA was the main reason I made the purchase.

Overall Review: If it were cheaper, I wouldn't be disappointed, but I opted for a more expensive unit thinking the quality would be better. The cheaper eSATA enclosure I purchased is still kicking after having it longer.

Pros: Got this to make a Network Drive with. I needed something with a fan and connect to my computer with USB 6.0 for faster transfers. It also works on my Netgear router with USB 2.0. The fan keeps it really cool as temps run 30deg C. I have a 1Tb WD Black drive installed in it and use it as a Media Server for my TV. Been able to watch movies off of it all day with temps never exceeding 35deg C.

Cons: Little tricky to install in case. Would have preferred a one piece plug to connect the hard drive with instead of 2 cables. First one I got had to RMA would drop data connection after less than 5 minutes of use.Tried different drives, different connections and even ran it out of the case. Knew it was the enclosure as everything would work fine in my hard drive dock.

Overall Review: I have Linux installed on a separate drive. The first one I got and tried to use it in the enclosure; half way through boot it would loose data connection and hang up. I have had no problems with the second one. Newegg replaced the first one free of charge including shipping. The only problem with that was it took 2 weeks to get a return.

Cons: Apparent high failure rate. I've purchased 3 of these housings, only the first one worked with zero issues. The second was RMA's due to trashing every hard drive put in it. I suspect the controllers were bad--both USB and e-sata, as I tried both in 3 different computers--same result. Every hard drive was trashed to a RAW format. Once installed internally drives were easily restored to NTFS. The third (replacement for #2) at least didn't trash the drives, but the HD activity light (red) is on 24/7. It does flicker when there is drive activity, but is on solid even when idle. It is possible this problem was caused by a bad drive that failed. A Seagate 5TB gave up the ghost after only a few hours. If the enclosure's drive controller caused the heads to be active all the time this may have contributed to the drive's failure, or it may have been the drive's fault and the enclosure's controller was just reflecting the heads were active all the time.

Manufacturer Response:
Dear Valued Customer, Thank you very much for purchasing this unit. We strive to provide the most reliable and highest quality products to our customers. We are sorry to hear that, please contact our support team to assist you with troubleshoot and/or warranty options. Phone: 1- 800-575-9885 Monday - Friday 8AM - 5PM PST Email: rma@rosewill.com Email2: techsupport@rosewill.com We look forward to hearing from you. Thanks, Rosewill Customer Care
Doug R.
Ownership: 1 month to 1 year
Verified Owner
Best enclosure I've ever owned5/27/2020 11:51:32 AM

Pros: Very solid - holds the drive in very effectively. It is not tippy. Not at all. Good throughput. I actually use the temperature readout. Solid on/off switch. Increased cooling power of a fan. Metal construction. Looks very sharp. Really helpful, cooperative customer service answering a question.

Cons: Not very portable. I cannot possibly think of anything else negative to say.

Overall Review: I bought two of these and have been running them for six months. They get used alternating days for a few hours each day to run a air gap backups (we turn the drive on, run the backup, then shut the drive off - that way, if we're infected, the backup is preserved). I've owned a lot of external enclosures. Some are flimsy - this one isn't. Some have really poor foam cushions that won't last over time - this one doesn't. Some have miserable designs that can actually contribute to stripping the hard drive screw hole threads when you construct them - this external went to together effectively and logically. Some have controller board that seem to work poorly - not this external though, we get excellent throughput. Some tip over easily - these are solid. Plus although I originally thought the temperature readout was a gimmick, I can actually see how the drive changes during a long backup cycle. And the fan seems to adjust, speeding up with increased temperature. Some external enclosures are plastic, which means poor heat dissipation. These are metal. Finally, because I turn them on/off for every use, I appreciate the decent on/off switch that is built into it. When I first got them, I sent a question about routing the wiring to customer service because I was being over cautious and because the units I bought are being used for critical backups. I got a quick response - and then a second response from their tech team, also quick. Bottom line. Everyone, please buy this external enclosure. That way the company will keep making them and then when I need more, they'll still be in production and available for sale. Because, except for portable use, I've never seen an external that I've been this happy with.

Pros: Price and FREE shipping, of course. Very easy to install a hard disk and set up, Woks just fine.

Cons: I saw some one report the power plug being hard to plug in. I experienced nothing like that.

Overall Review: I don't really need the lights, temperature or the Hard Disk r.p.m but they don't bother me at all. Nice purchase.

Overall Review: I got a new 80mm fan

Cons: I bought a total of 3 and 1 not only didn't work but it corrupted a five terabyte hard drive, upon closer inspection the outer casing was cracked and the fan was rubbing against the enclosure itself making a clicking noise.

Overall Review: I have bought many hard drive enclosures over the years and I have never had any data loss when put in the hard drive in and getting it set up, I thought this time would be no different but I ended up losing a large amount of data collected over the last 5 years, some of it not replaceable. Live and learn I guess, I will not be buying another enclosure from this brand.

Manufacturer Response:
Dear Robert, I am so sorry to hear that. Please rest assured that the RX304-APU3-35B is covered by its 1-year manufacturer warranty, you could contact us to claim the warranty with your order invoice. We do care about your feedback and will continue improving our products in future. Phone: 1- 800-575-9885 Email: rma@rosewill.com Email2: techsupport@rosewill.com Thanks, Rosewill Customer Care