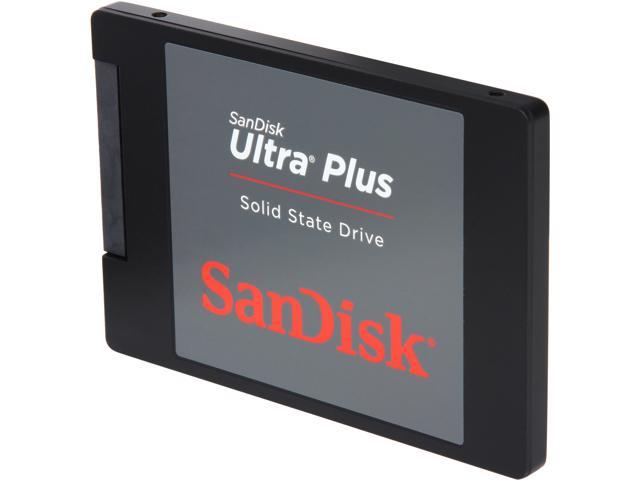 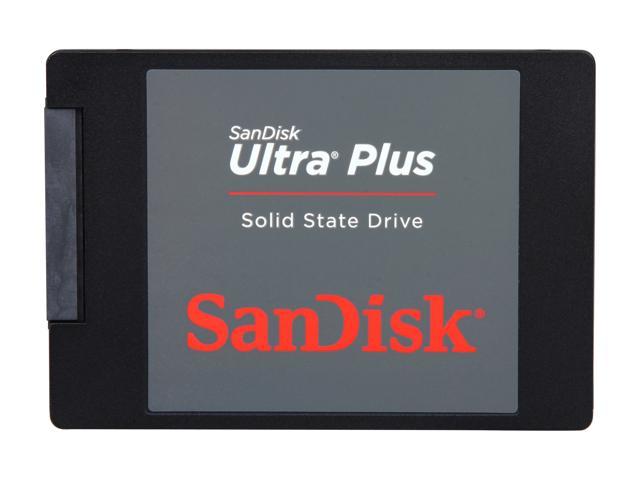 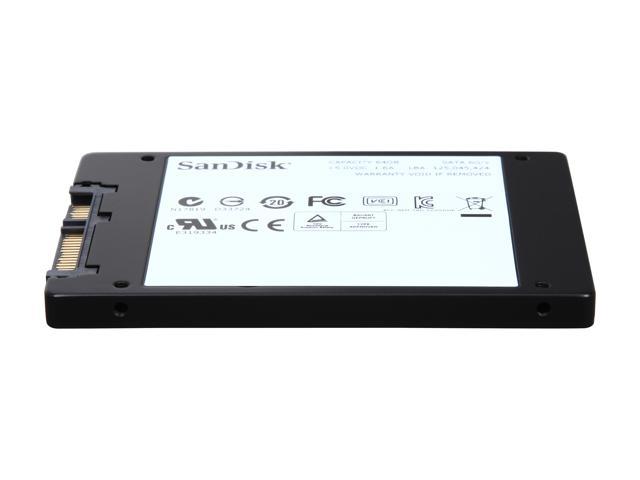 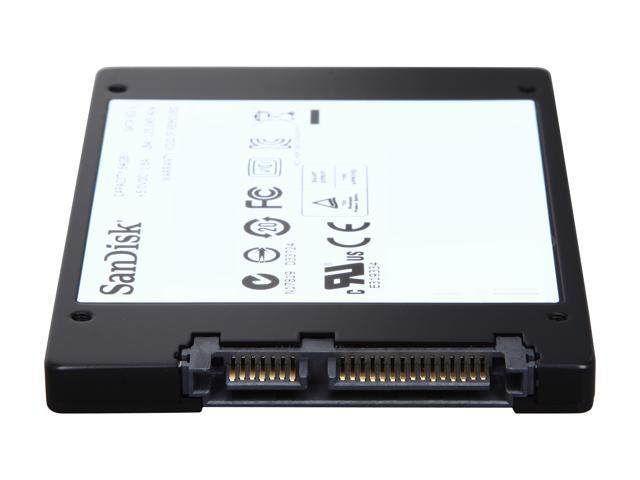 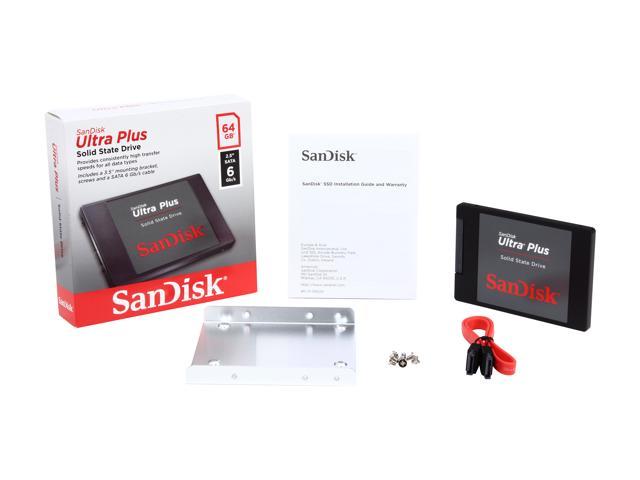 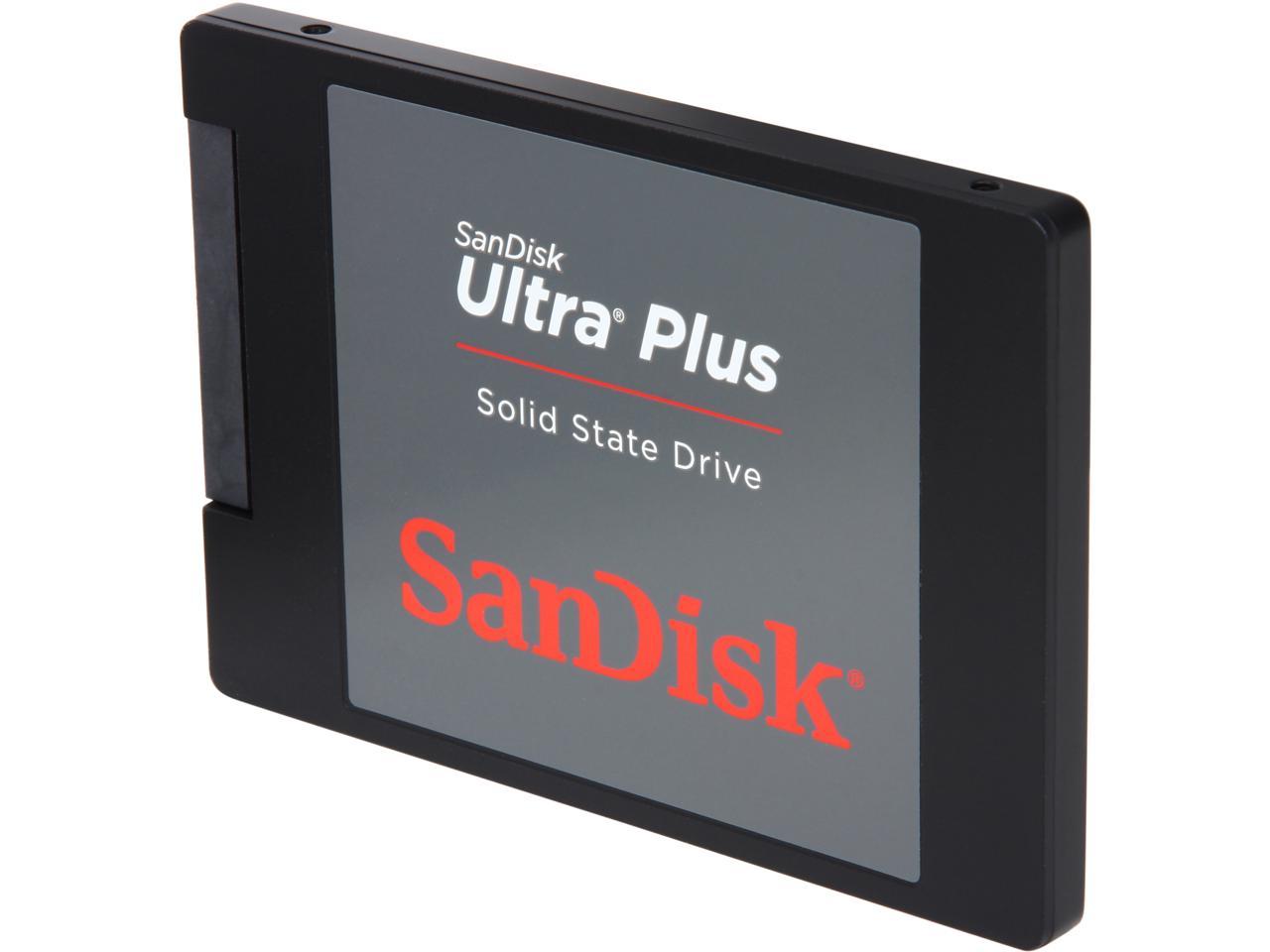 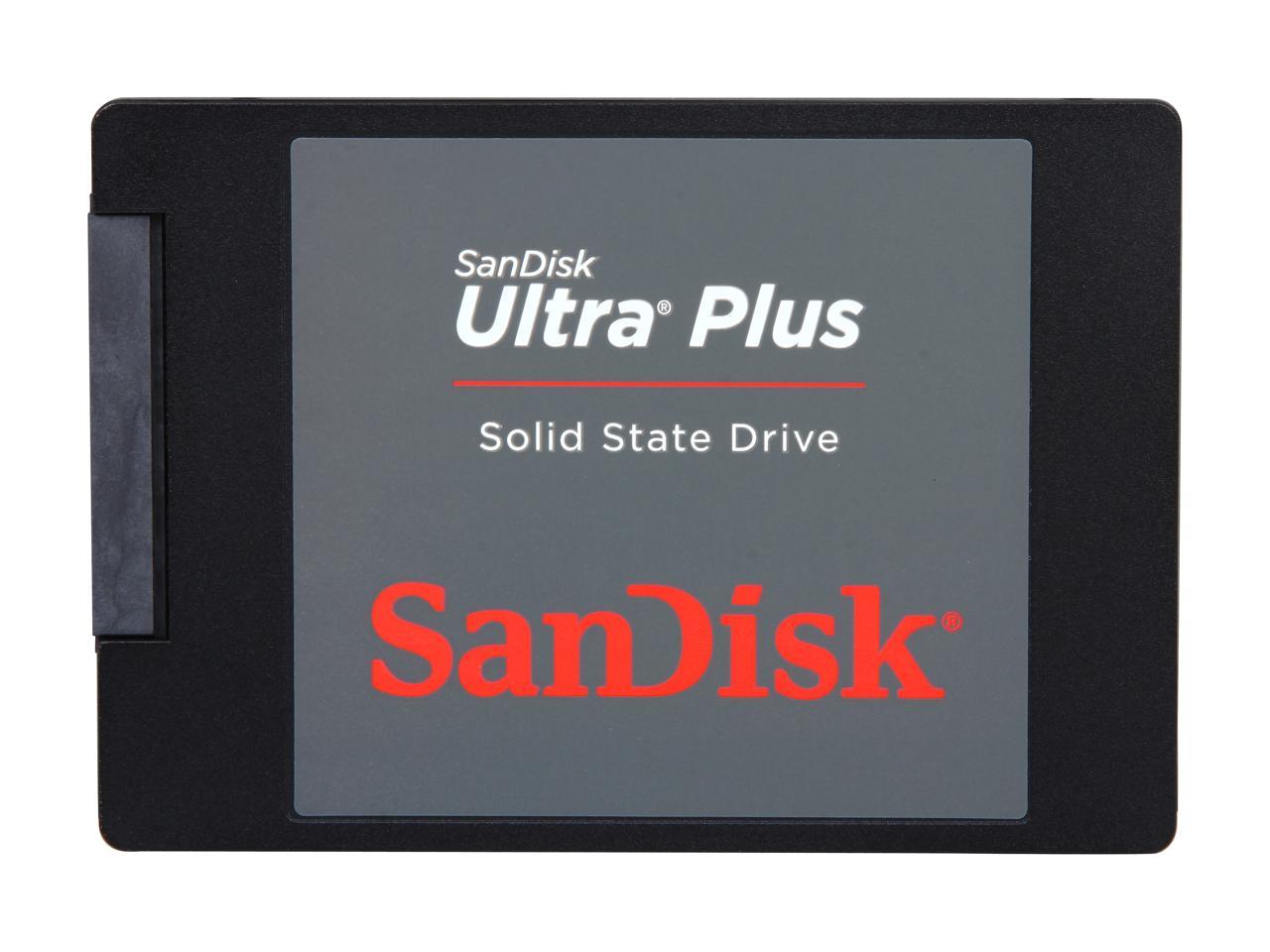 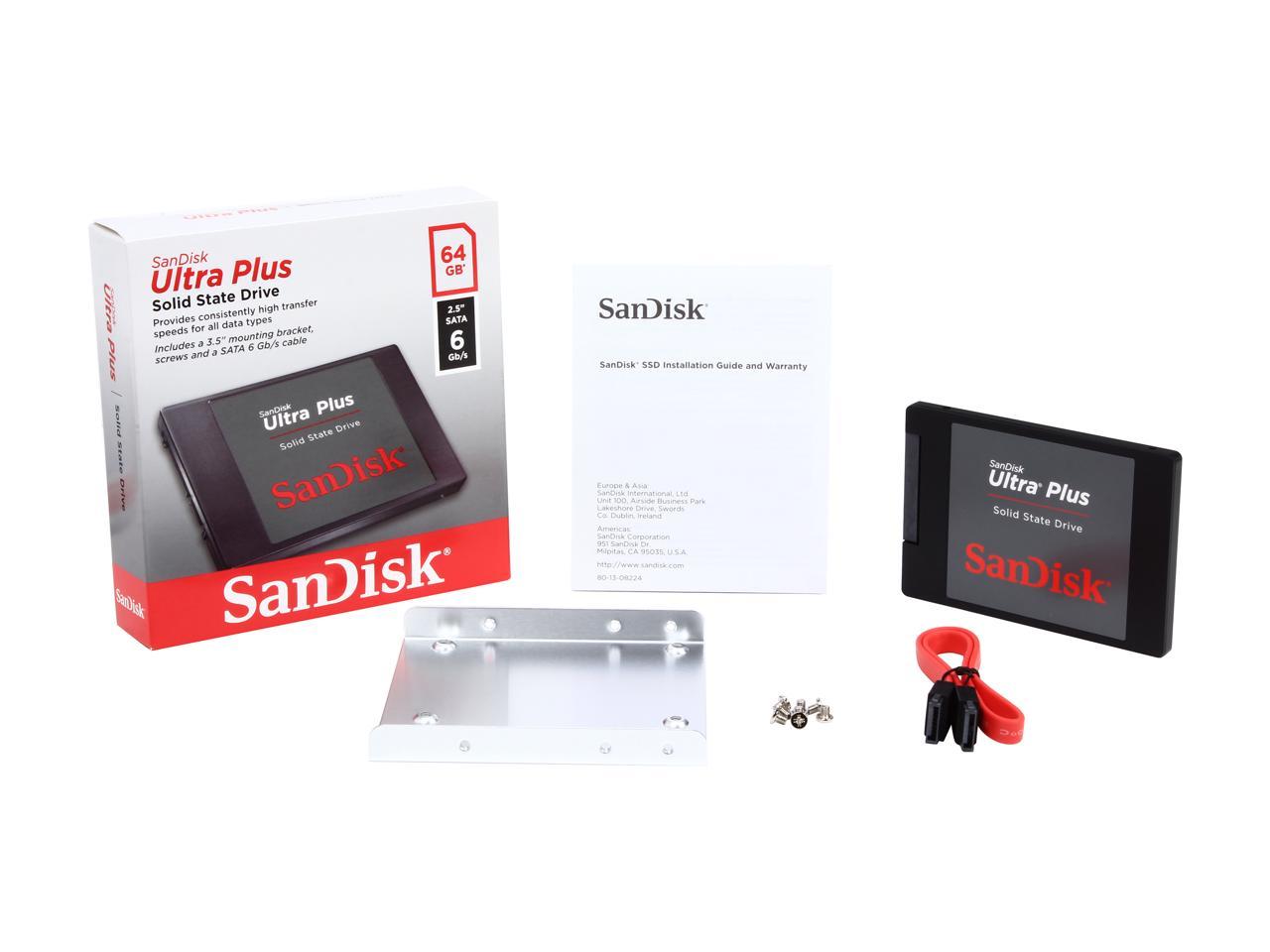 Learn more about the SanDisk SDSSDHP-064G-G26

Pros: Fairly speedy for the price. The main benefit to SSDs is for Windows to boot and shutdown almost instantly. SSDs can also be helpful for photoshop and other write intensive tasks but some games also load a bit faster too.

Overall Review: The sweet spot for performance is 256GB or higher with SSDs. 128GB is usually pretty close but 256GB or higher really should be your goal if speed and reliability is your most important factor. You'll need to keep about 20-25% of this drive free in order for it to maintain its speed and handle level wear and such productively. If you don't, your SSD will almost certainly wear out faster. That's just a reality with all SSDs at the moment, though. It's also highly advisable to put your temporary internet files and other frequently written to files on a HDD if you truly want to maximize the lifetime of your SSD. Writes are what wear out SSDs. This is a very much YMMV situation so it's up to you and your needs. The true test for this SSD will be its long term viability. If it ever fails I'll be sure to update this review.

Pros: - 128GB is about where you want to be size wise for: A single drive laptop solution allowing you to install a reasonable number of apps without worrying about space. -or- A desktop OS drive leaving plenty of room for apps, maybe a few games, and even a few docs should you wish. 60-80GB though would be a more wallet friendly alternative for desktop users as that leaves plenty of room for the OS and apps providing you keep the rest of your data on other drives. - Sequential reads were normally in the low to mid 400's. - Writes floated in the mid 200MB/s range. - Functioned fine during testing on Sata II however you will saturate the bus so Sata III is where the full performance of this drive will be realized. - Once the OS is loaded, applications are very responsive. Opening up a web browser or an application like Photoshop is noticeably faster then that of traditional platter drives. On the write side of the house, software installations were quick and video rendering (while not ideal on a SSD) was equally impressive on this drive. - Boot times are one of the first things you see an improvement with when moving to SSD from a platter drive. As an example on a quad-core/4GB memory, Windows 7x64 box including POST: 1m 16s on a 10k rpm raptor 33 seconds on the Sandisk Extreme II SSD 39-50 seconds on the Sandisk Ultra Plus *Please read the 'cons' section for the explanation behind the range here*

Cons: Sounds great, so why the 4? - Sporadic dips in performance. I tested this drive out on 2 seperate desktops and a laptop. (One over sata 2, the others sata 3.) I noticed boot times would vary by up to ~10 seconds on each machine. While this doesn't sound like much, I don't have this issue with any other of my SSD's. (Over the last few years, be it through purchase or test units I've accumulated 8 SSD's so I have a fairly good base to make comparisons.) When you're in the 30-40 second boot range (this includes POST), that equates to a 20-30%+ difference in performance. To give an even better example, running a quick scan in Microsoft Security Essentials on Windows 7 x64 takes ~45 seconds on most of my other SSD's yet this one would vary between 60 seconds to, at one point, just shy of 3 minutes. Something isn't quite right here with this particular drive. Outside of this one single issue, I really can't find any faults with this drive but it's a large enough of an issue to warrant knocking an egg. (I'll address that point a little further in 'other thoughts')

Overall Review: I have always had positive experiences with Sandisk in the past and will continue to use them in the future. I'm currently using the Sandisk Extreme II 240GB SSD as my OS drive on my main PC. And I absolutely hands down love the performance of that drive. Enough so that, providing the price difference won't break your budget, I'd recommended the 128GB Sandisk Extreme II over this drive even if I wasn't experiencing the problem I was. I'll also add the only SD cards I buy for my family's digital cameras are Sandisk brand. With that said, it's the reason I'm giving them the benefit of the doubt and not rating the drive lower then a 4 as there is the possibility I may just have a faulty drive or, most likely, an issue that will be addressed in a future firmware update. I have followed up with a few of my other reviews here on Newegg when needed and I will most certainly check back in if/when I find a solution to the sporadic speed issue or I find the need to raise or lower my review score. For now though, it's not a bad mid-tier SSD. Not the fastest; not the least expensive, but competitive enough on both fronts.

Pros: I spent quite a bit of time hunting for a deal on a 128GB SSD to use as a boot drive in my HTPC - nothing special needed, but I knew an SSD would be a huge improvement over the 1TB Green that I've been booting from for the last few years. At the current price, this just can't be beaten. Sure enough, the performance of this drive - the snappiness, the speed of installation and loading of programs - is very, very noticeable when coming from a platter drive. The point of this SSD is that it *is* an SSD - It's not the latest and greatest, but for the money, you won't find more performance for dollar from a storage device. If you are still using a platter drive and you have sufficient money to buy this drive in your bank account, then I can't fathom why you haven't bought it yet.

Cons: As mentioned previously, this is not the fastest SSD in the bunch. However, for that incremental increase in read and write speeds, you may easily pay double the price of this drive. Reliability has yet to be seen on these drives - Solid state is inherently pretty reliable, so I have no particular worry here. I perform regular backups of my important information, as everyone should, and this SSD resides in my HTPC anyway - I'll happily re-install Windows and download VLC again if need be.

Overall Review: The SSD is like a drug. Once you use a computer that boots from one, everything else is archaic. SSD speed becomes normal, and everything else slow. This is, however, one drug that I advocate for - the only downside is the expense of the technology, and that is why I'm glad this drive exists - SSD performance is now attainable by the masses.

Pros: Compared to Crucial M500 this Ultra + SSD uses 50% less power when idling and about 40% less when opening and saving files. This could give you some extra battery time on your laptop.

Cons: all SSDs are still too pricey

Overall Review: Most SSDs need less power than a regular spinning hard drive. But some SSDs are more power efficient than others, and this Sandisk is among the better ones.

Pros: This model is among the most power-efficient, allowing your laptop to run a longer time before the battery needs recharging. Has worked OK with no problems for about 5 months. It's a bit faster than the previous model which was simply called "Ultra".

Overall Review: How long your laptop battery lasts before it needs recharging is influenced by several things such as battery capacity, how old it is and, especialy, how bright your screen is. Turn down the brightness and save your battery! Also, an energy efficient SSD like this Ultra Plus can provide an extra few minutes of battery life compared to many other SSDs out there, and significantly longer than a regular spinning hard drive (HDD).

Overall Review: Sandisk isnt exactly known for their high quality SSD's but more to their memory cards. Some reviewers complained that their drives died within a few months or in less than a year. Weather or not this was just a faulty batch remains to be seen. My drive is currently working fine and hopefully it continues functioning without problems through its life span. You may wish to get the 256GB model instead since it has double the write speed along with double storage and overall better value.

Pros: SanDisk has always been known for their excellent flash memory products ever since portable electronics began using flash storage. In recent years, they have made a name for themselves as a solid provider of SSD products, silently producing excellent OEM drives for the likes of Apple in their MacBook product lines. They've burst on the scene with some retail lines that are competitive with the best in the industry and this Ultra Plus is no exception. The drive uses the same 19nm eX2 MLC produced in-house by SanDisk as their top of the line Extreme II SSD. The main difference I can tell is that this model doesn't use Toggle NAND and also has an older (and possibly slower) Marvell 88SS9175 vs the 88SS9187 on the Extreme II. Toggle NAND allows for faster transfer speeds in asynchronous NAND designs, which is probably part of the reason for the slower write speeds compared to the Extreme II, which uses Toggle NAND. While these differences do result in some differences in performance between the two product lines, they are also priced and positioned differently as mainstream and performance products, and still competitive against similar offerings from their competitors. As you can see from the specs, the performance of this drive is excellent and it can regularly be found for much cheaper than it's Extreme II counterpart or competing solutions from it's chief competitors, Samsung and Intel. Please see other thoughts for comparisons against popular SSDs.

Cons: The only major negative of this 128GB version of the drive is that it has significantly slower Seq. Write speeds than it's 256GB counterpart. This is not uncommon for SSDs however, in fact, most SSDs will have slower Write speeds for lower capacity drives due to the way SSDs work. Based on the number of NAND modules/channels they have and whether or not they are in a synchronous or asynchronous layout, SSDs generally perform better with higher capacities. This may be something to consider as the 256GB version is not that much more at only $65 more for 2x the capacity and roughly 50% faster Seq. Write speeds. As I mention in my Extreme II review, I really feel SanDisk can spice up their marketing and box art for their SSD lines. They've got great SSDs that are competitive with everything on the market, but their boxes look just like their flash products. While excellent, they are easy to overlook, especially stacked against other more attractively packaged SSD products on the market.

Pros: -Brought life back to my old-ish laptop. -Reliable -Works at the rated speeds according to benchmarks I ran Overall, I am very happy with this SSD, especially for the price that I paid.

Overall Review: I bought this to make a laptop that was running very slowly usable again for work/school. This has done a terrific job of that. Not only does it boot MUCH faster (like around 2 minutes before down to 15 seconds or so now), but it got rid of most of the sluggish feeling when launching applications and working.