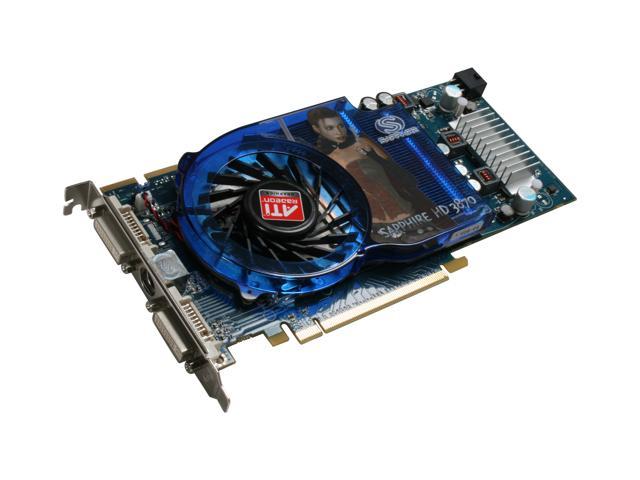 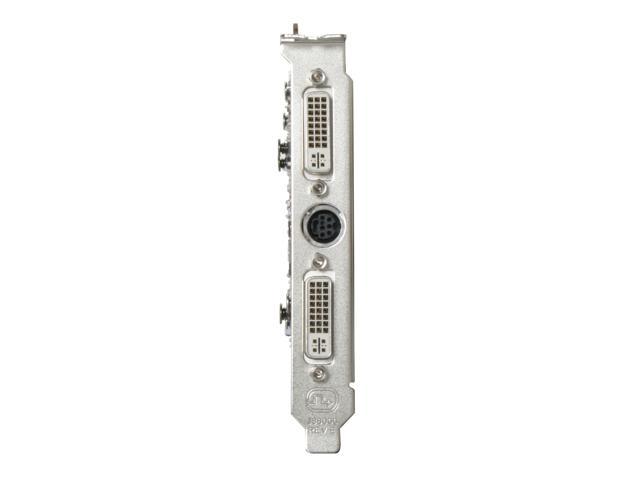 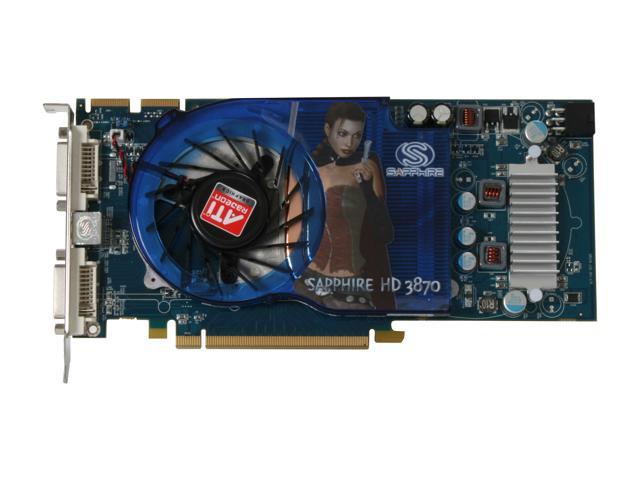 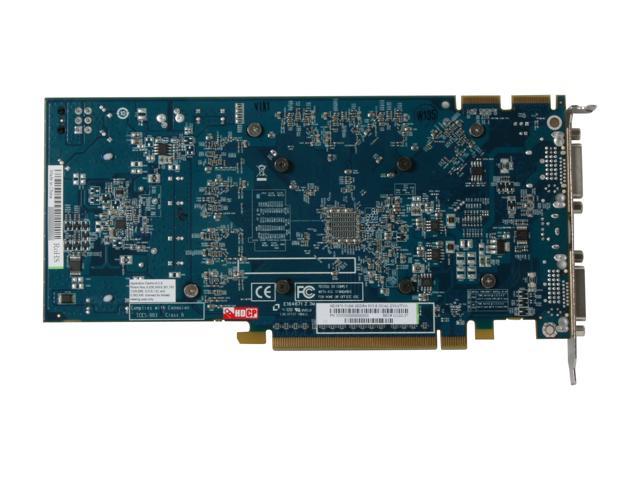 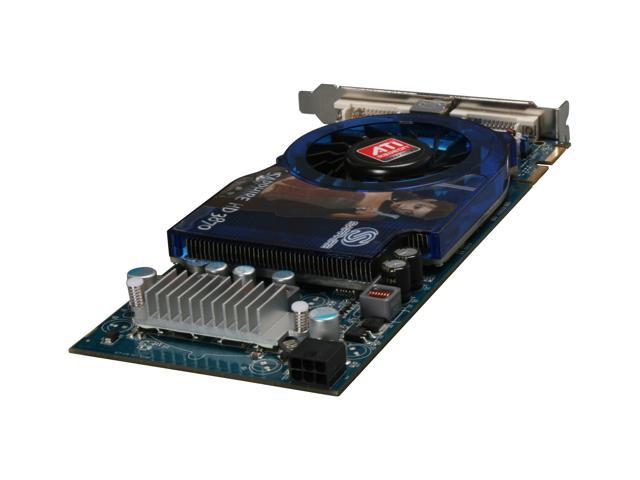 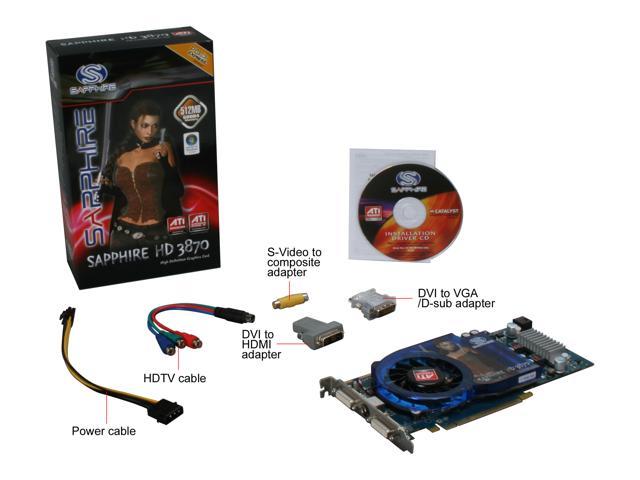 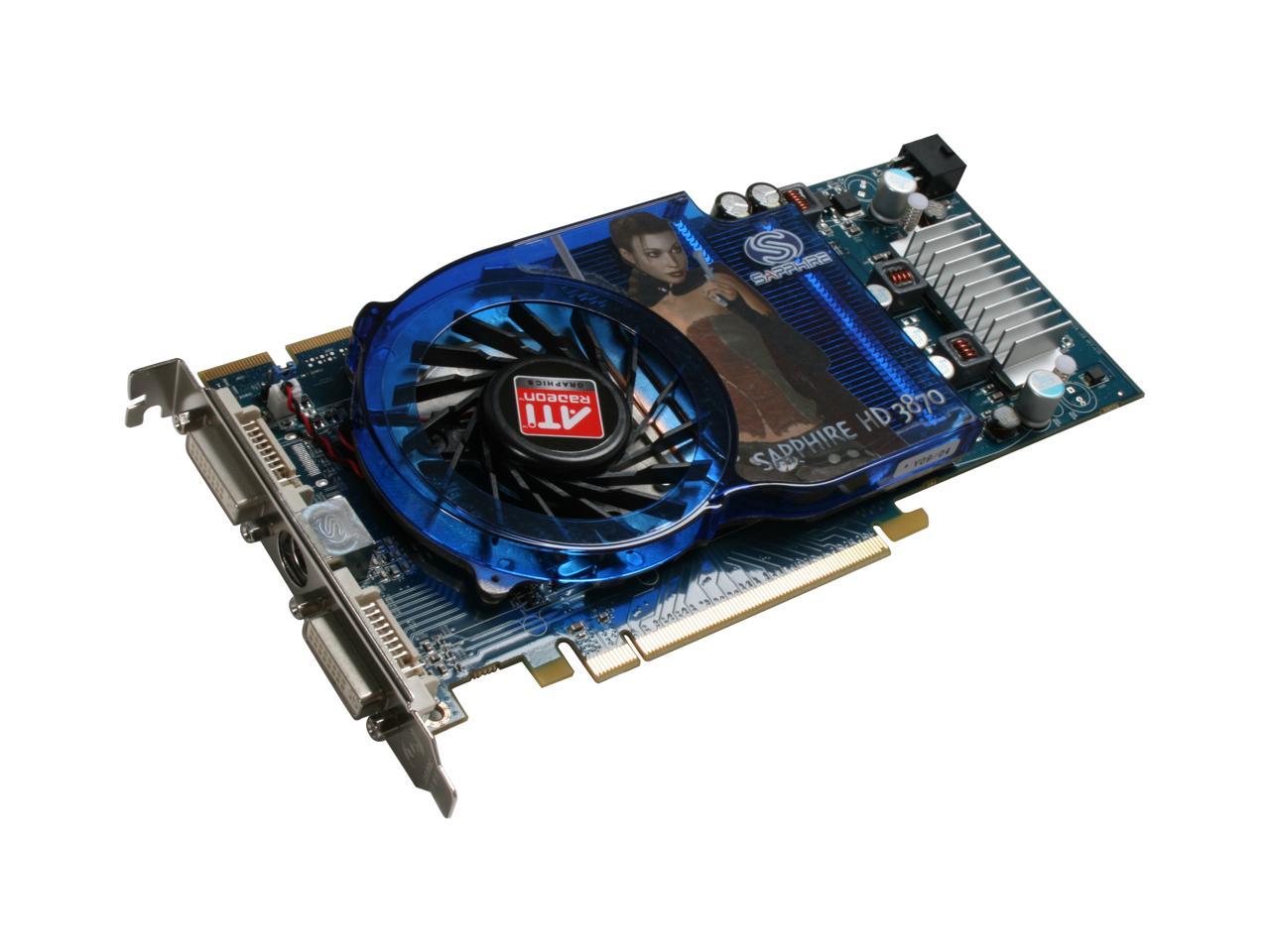 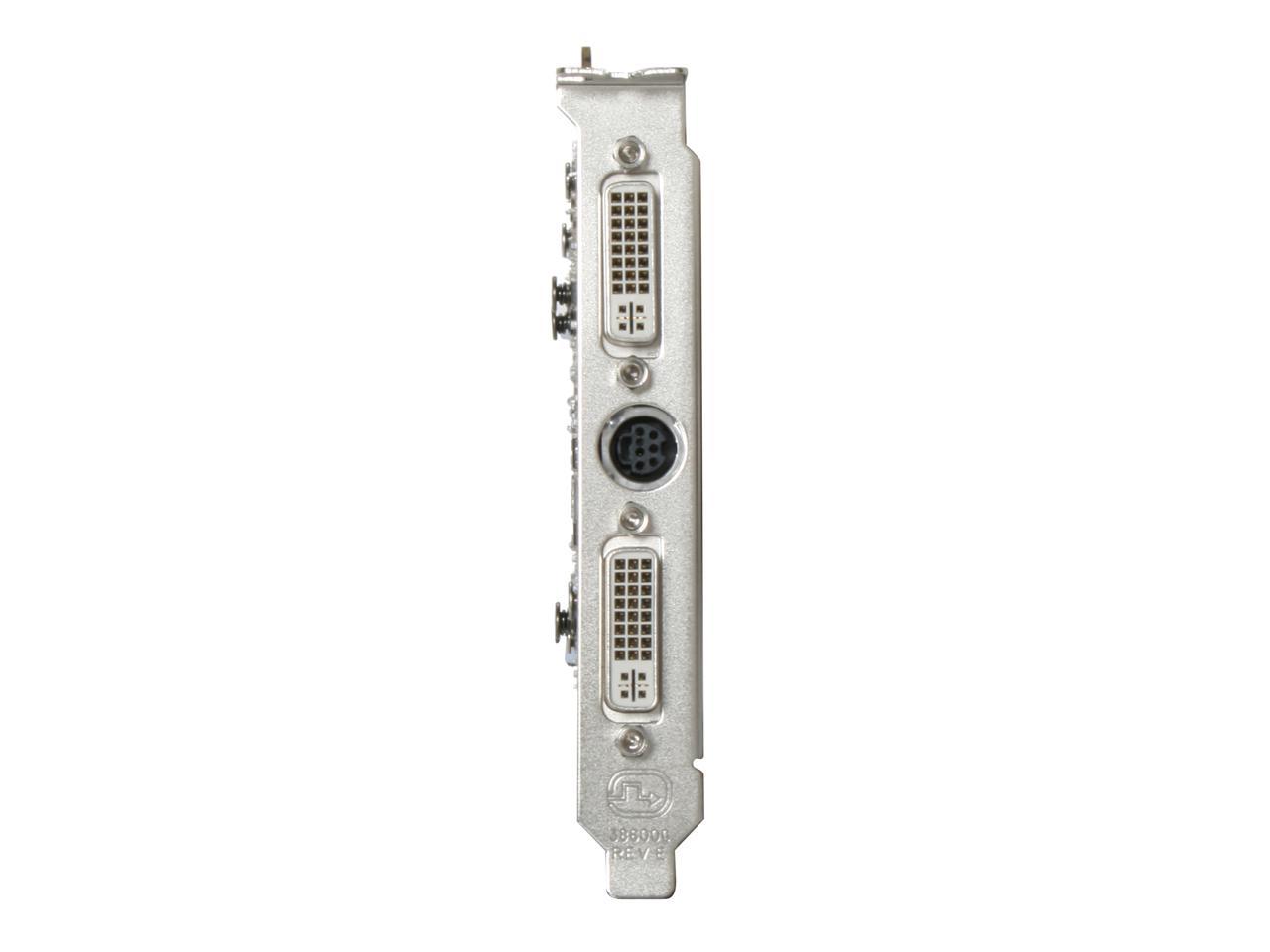 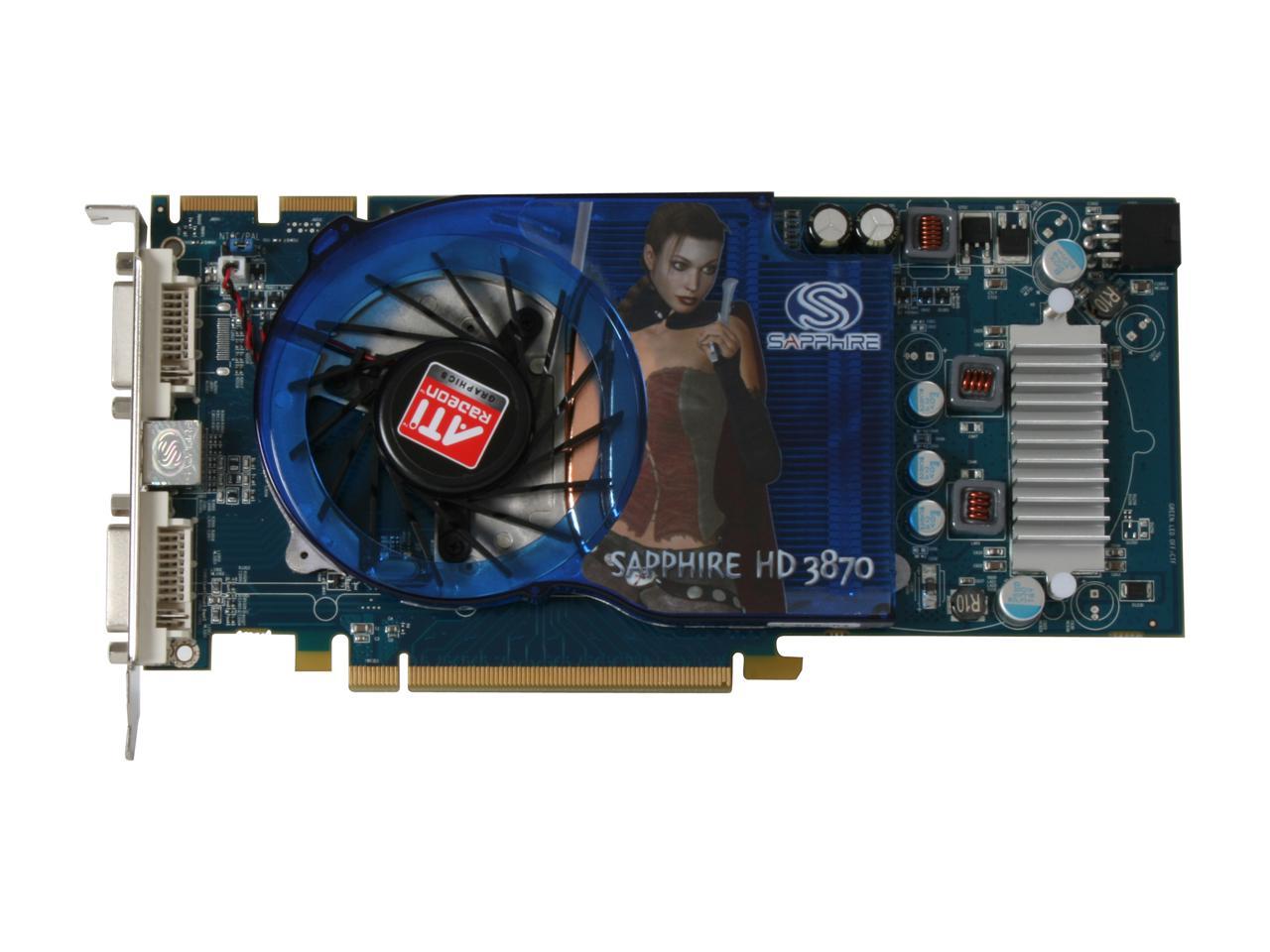 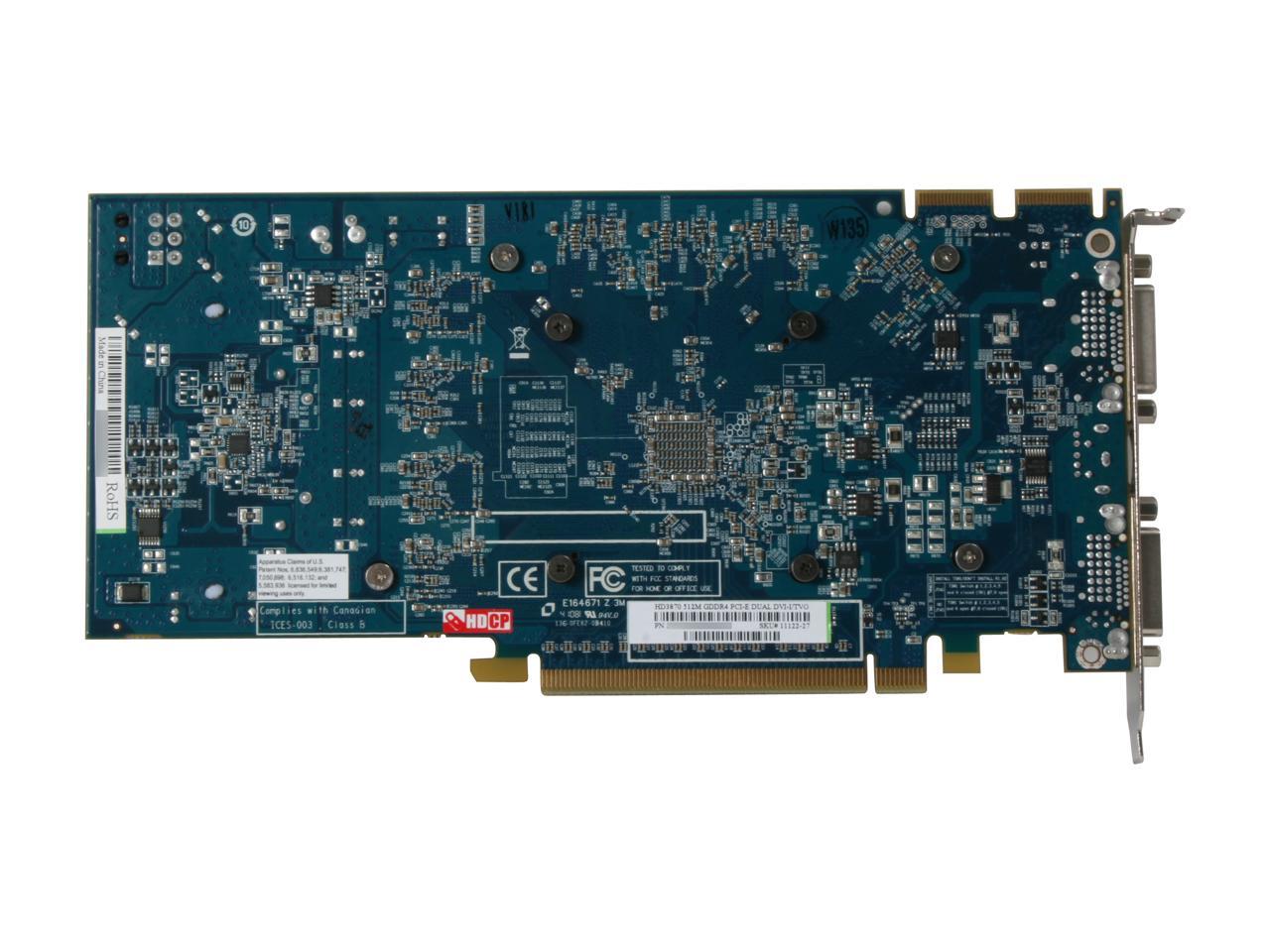 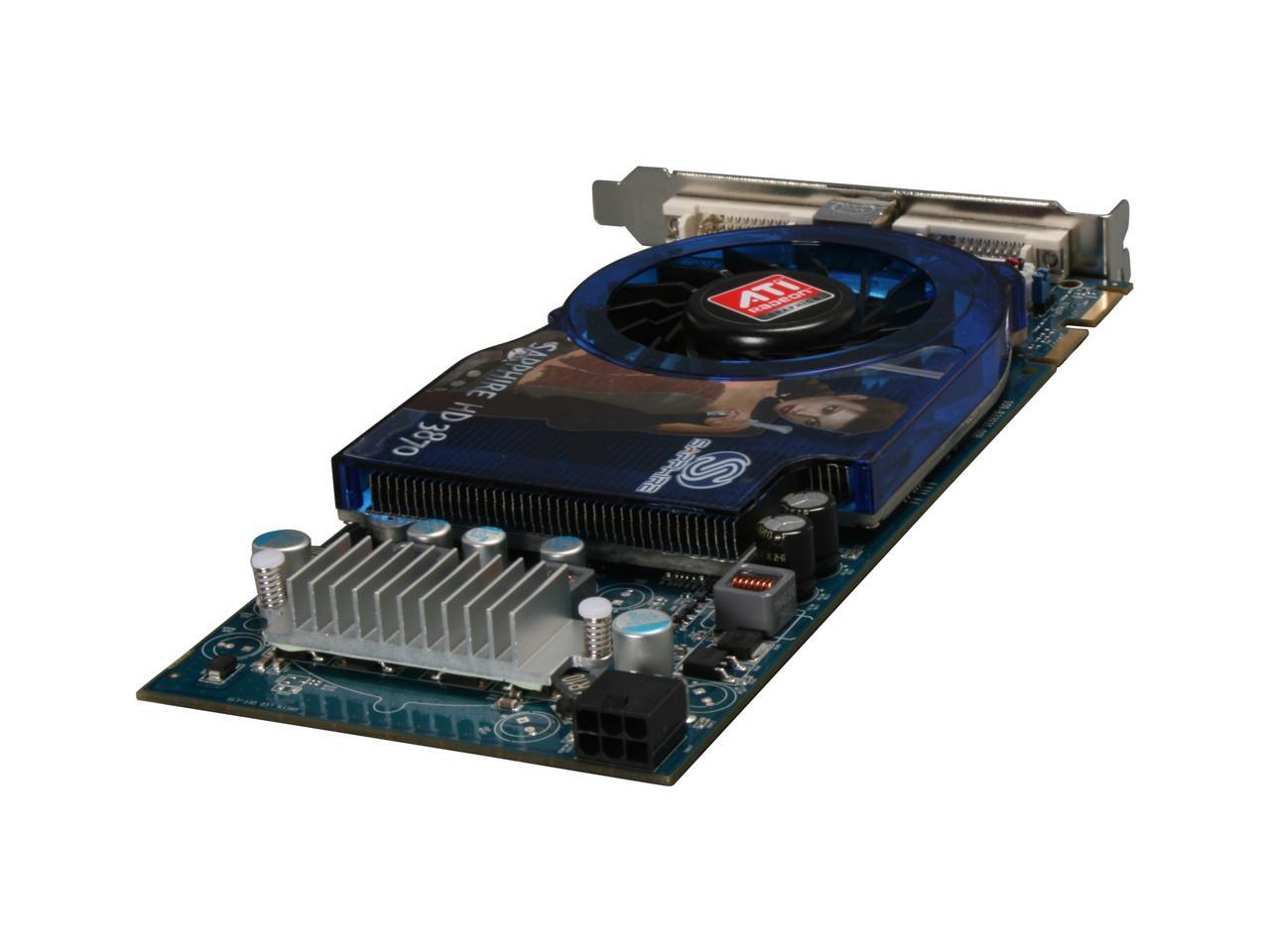 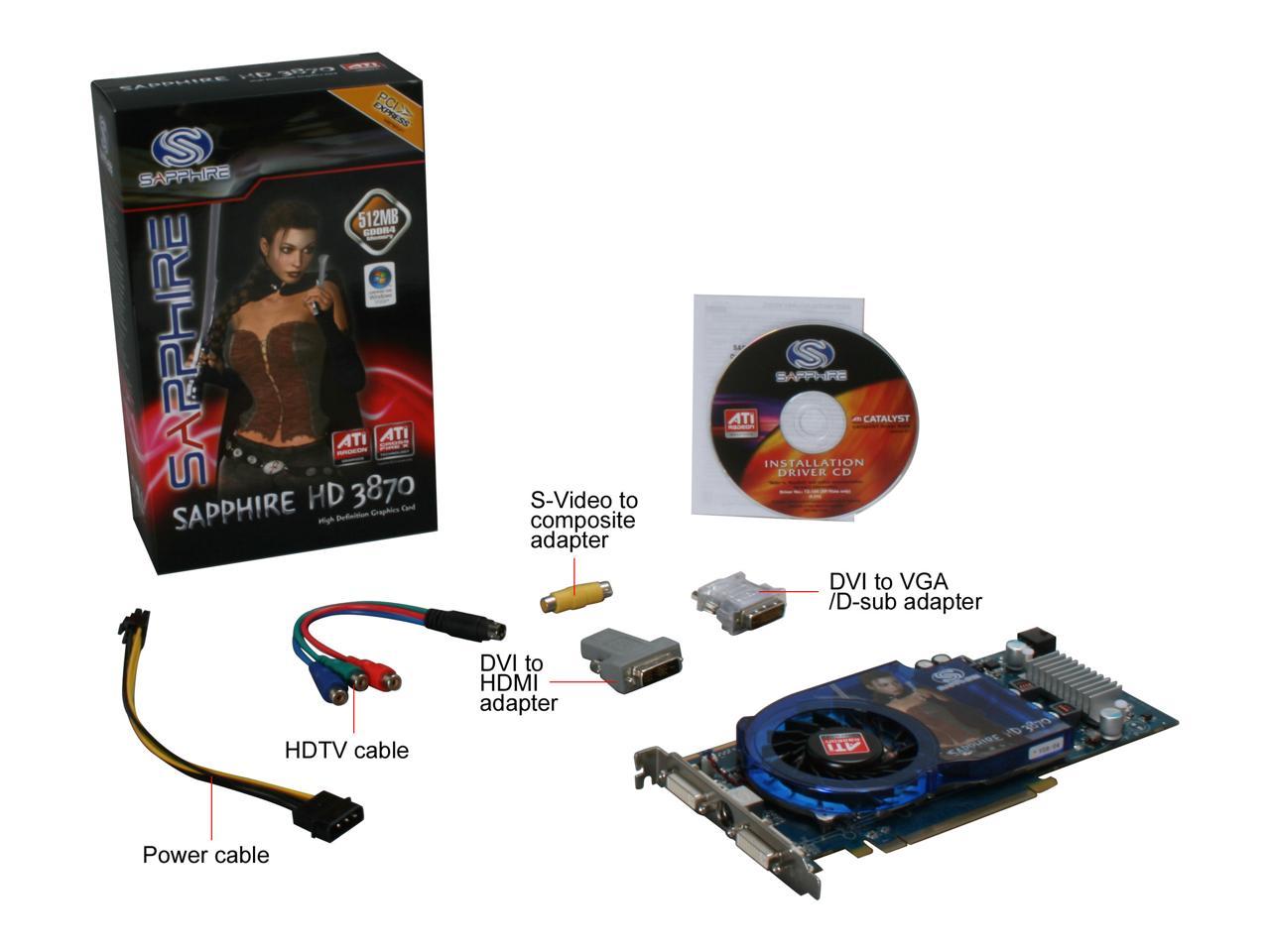 (631) Write a Review
OUT OF STOCK.
Specs
Reviews

Overall Review: for those of you that are interested in the contents of the box, it comes with a dvi-hdmi, dvi-15pin d-sub, 4 pin molex to 6 pin pci-e converter, composite video converter, a sapphire sticker, a paper manual, and a driver disk...

Pros: HD3870 is a great bang for the buck card. I purchased this for my budget gaming system. In 3DMark06, im scoring an average 8000-9000 with video memory at factory frequency and core clock at 630MHz, all with budget memory and a budget motherboard. World of Warcraft sees 60FPS normally, 40-50 in Shattrath city, 40-50 in AV with large groups...all on high settings(2x multisampling). In counterstrike source with no AA/AF and all max settings I see a normal 100fps average. With 2xAA and 2XAnisotropic filtering I see an average of 60-70FPS. On the stress test my average fps is 150-186, many times maxed out at 299 on some parts of the test. If you want the best framerate, its a no brainer to set the card on its "optimal performance" mode if you want to sacrifice a few visuals X-). I believe this card could perform slightly better if I had a higher quality motherboard and slightly better memory. But I and DEFINATELY satisfied with the performance its pushing right now. Great budget card.

Cons: Okay okay...so you've read that a few of the cards have had some slight cooling problems. This is true, but not too big of a problem for non-overclockers. For a while, my card would keep crashing in-game after about an hour or two of gaming with more periodic "black screen" with the card reloading and "recovering" back in-game. It got annoying. But I found out that the auto-tune feature of ATI Overdrive in the Catalyst control center turned up my settings too high, but the program did not seem to think so. I adjusted them to a proper setting. Main point, the card is slightly hotter than what was intended, but does not pose a HUGE problem...as long as you've got steady airflow in your case, you will be fine. Just please do yourself a favor if OCing and set the frequency lower than what is "reccomended" unless you know EXACTLY what youre doing. If you do some research, you will find that there are programs out there to help control the GPU temperature better with fan speed.

Overall Review: 5 out of 5, great performance for the price, make sure if you want the most performance to get a better quality mobo than asrock...a good ASUS will work fine:D Slight cooling issues had me snagged for a while, make sure your case can handle the airflow before doing some good gaming with this card. Definately doesn't need the OC for great performance, I just felt like tweaking it a bit :) System specs: AMD X2 2.6GHz 5000+ dual core OCed at 3.0GHz stable, Radeon card (obviously): OCed at 630MHz clock stable and stock memory clock, 2GB G-Rock memory, ASRock Micro ATX mobo, 500-watt PSU, 160GB Exelcesior HD.

Pros: Great frame rates for the money I love this card. It runs very cool even if overclocked.

Overall Review: I just wanted to express my happiness. I play UT3 with the settings on max and it runs smooth and it looks FANTASTIC!

Cons: Too loud and hot... running one is acceptable but running two is really annoying. Better get an afermarket HSF to replace the stock cooler or just get one with bigger HSF.

Overall Review: Heatsink works, but threw on a old Zalman VGA cooler from my old 1900XTX. Yup that is right it uses the same mounting holes

Overall Review: Great card at a great price, thanks Newegg!

Pros: Runs my games like a champ. I play Call of Duty 4 and BF2 and 2142 series on max. Crysis runs good on all medium settings. Zero problems right out of the box it was golden.

Cons: None I love this card!

Overall Review: I watercooled mine with a maze4 GPU block and it runs cool like no other. Time for some overclock!

Pros: Amazing picture. I have it hooked up to 2x Hanns-G 17inch monitors and the resolution jacked as high as they would go 1400 by something.. I can play any type of game and it is amazing. Price is cheap and you can run the card in crossfire. I don't know why you would need that, but you can. Plus it comes with the necessary hardware to do so

Cons: Comes with one DVI adapter to turn it to VGA... I just bought another one $2.99 <<bfd.. Does come with a DVI to HDMI adapter

Overall Review: The shipping was incredibly fast. I ordered EVERYTHING for my computer rig on monday and recieved everything on wenseday (paid for the cheapest shipping i could) Keep in mind thursday was Christmas :) <<Wow