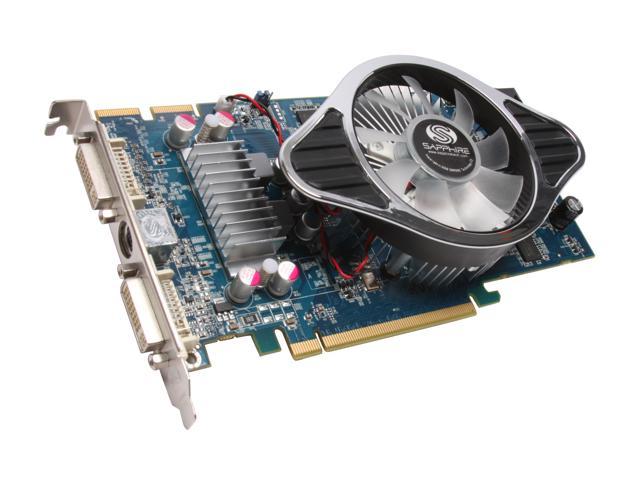 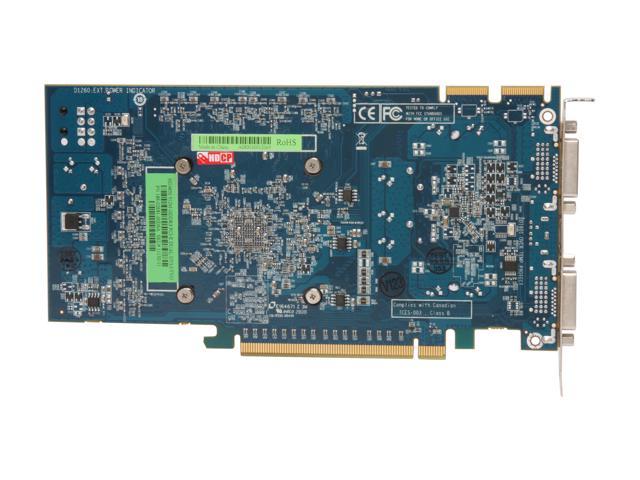 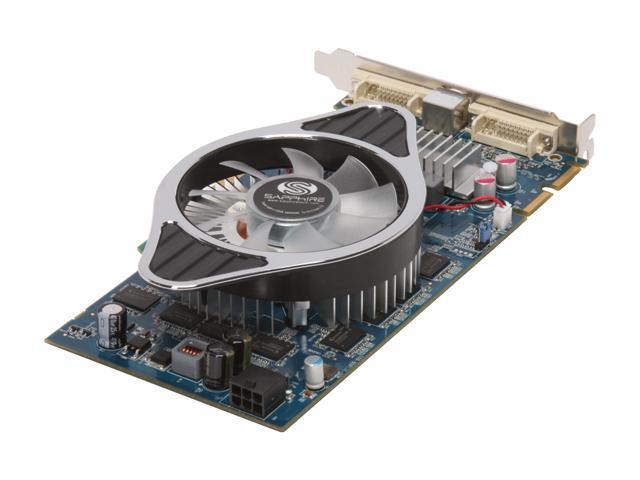 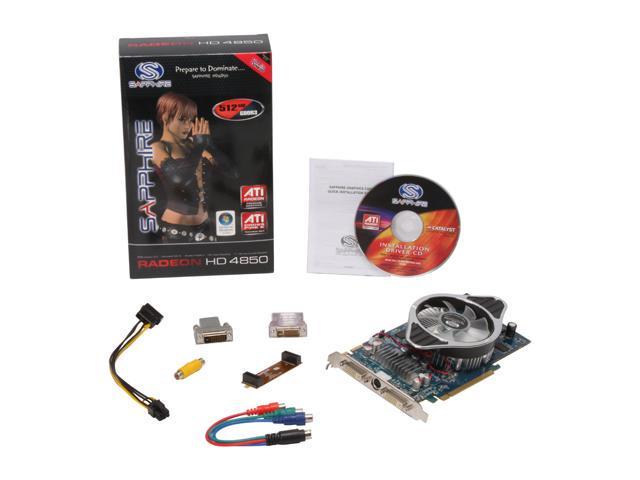 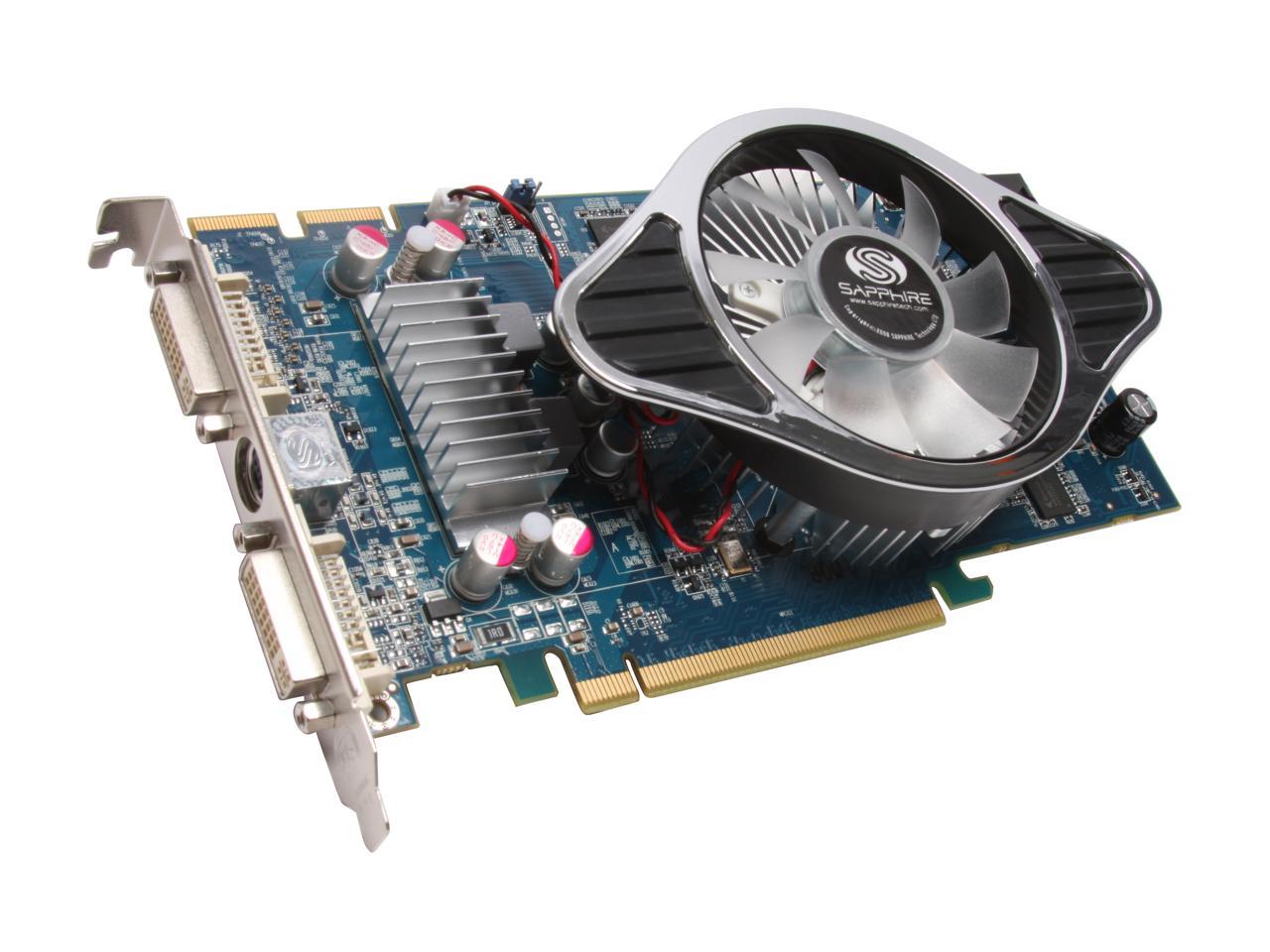 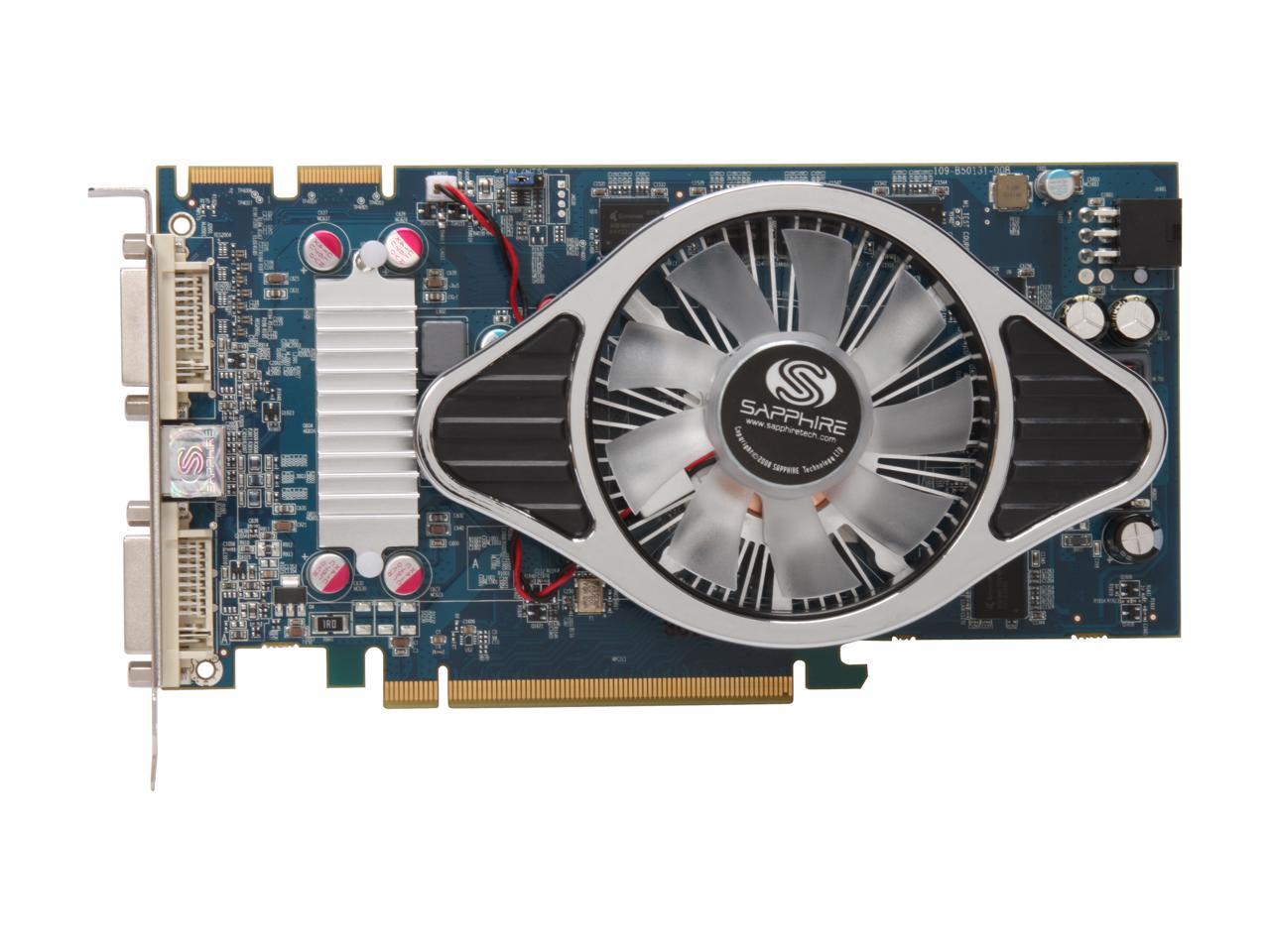 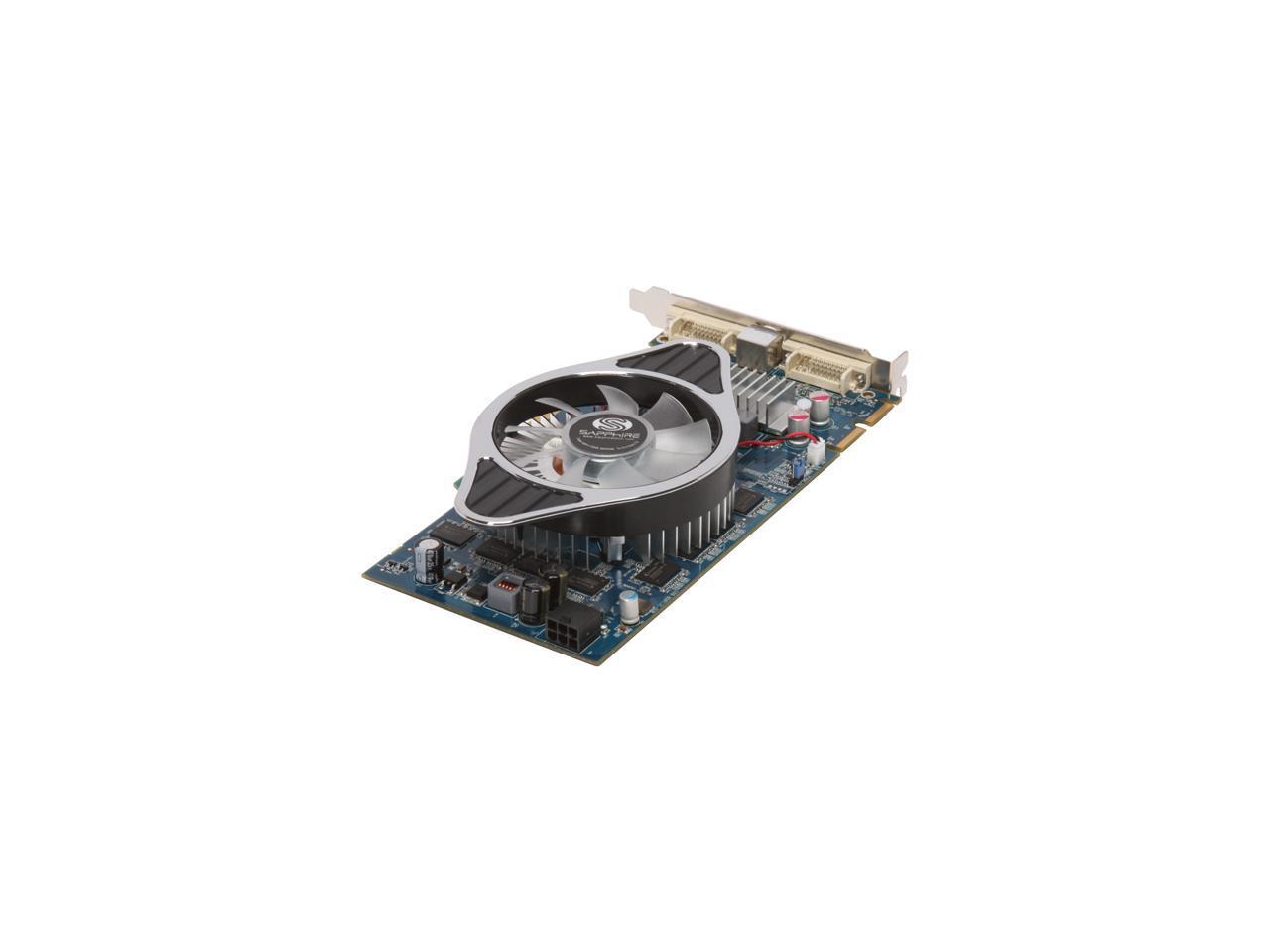 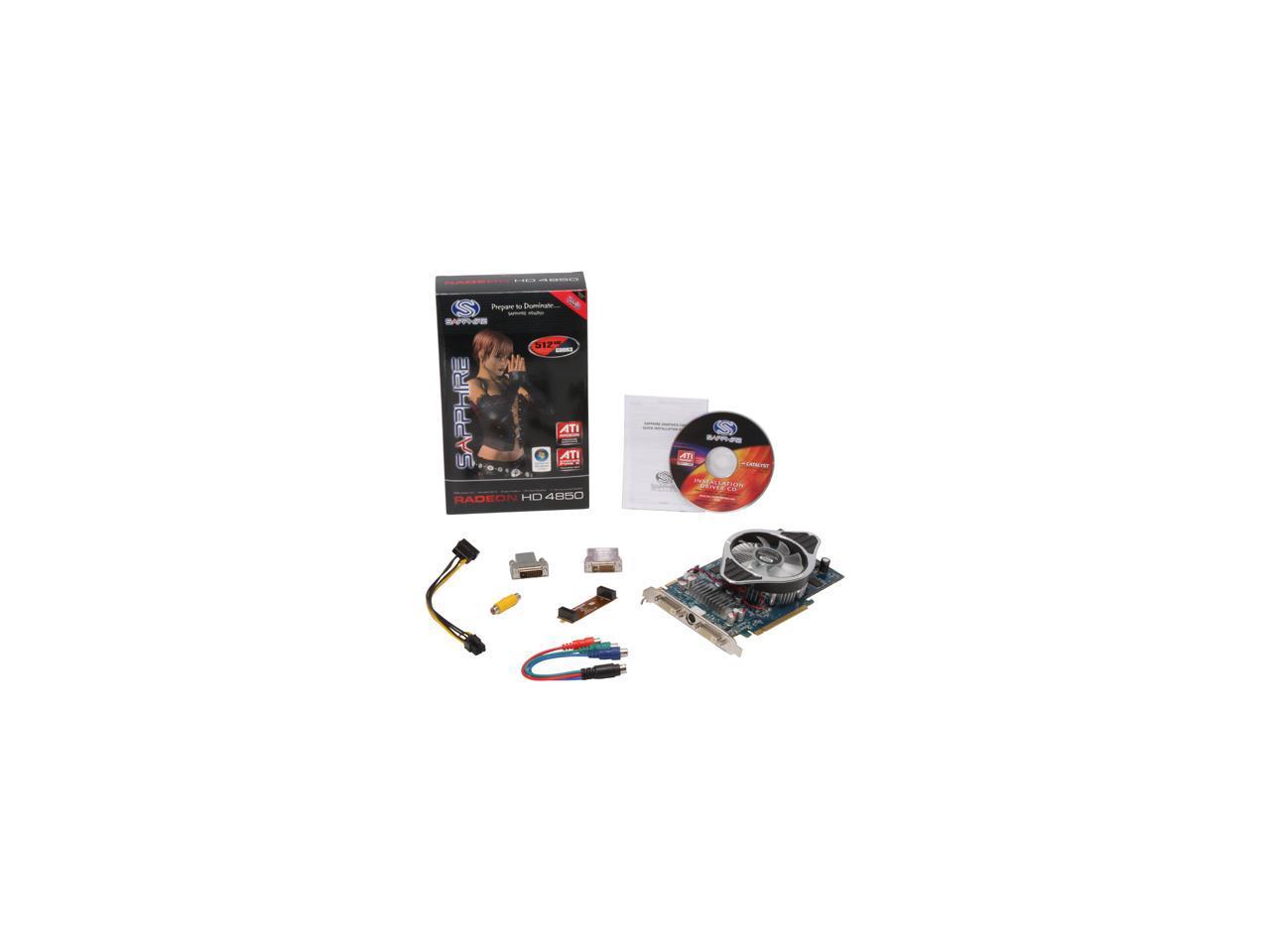 (427) Write a Review
OUT OF STOCK.
Specs
Reviews

Cons: These cards run hot. I was getting up to 90C during a full load. Definitely think about an aftermarket cooling fan. I can hear the cards when set at 100%, but with my 7 other fans, it really isn't a big deal.

Overall Review: These cards may not look as cool as the 8800GTS cards, or even other versions of the HD4850. But because of that you'll save money and space in your case. I should also mention that these cards are shorter than the 8800GTS and will not crowd out your SATA's when plugging in the power connectors. Both cards some with a Crossfire bridge, and both cards have two slots each. Since I didn't find any literature (officially) about using one or both - I opted for both. Not sure if there is a benefit to that, but it makes me feel better none-the-less.

Pros: Amazing performance for the price Has 800 Streaming processors clocked at 625/1000 fan reduces temperatures amazingly! My idle temps are 40 full load 75-80 Had a previous standard 4850 which was way hotter than this card The old fan/heatsink on the old 4850s had 70 idle 100 full load! Temps will vary with people depending on how much airflow you have through your case and where you live though i live in the Santa Cruz Ca so its pretty cold This thing's performance is amazing! have a 22in 1680x1050 monitor and this thing beasts all games i throw at it Fallout 3, Bioshock, Team fortress 2, Half life 2, The Witcher, Left 4 Dead, Gears Of War, Rainbow 6 Vegas 2, Call of duty 4, call of duty 5 ALL Great frame rates on max resolution/settings The only games i cannot get good frames Crysis, GTA4, and Prince of persia this is because 8.12 drivers are not optimized for AA in POP Crysis is almost playable at HIGH at 1680x1050 (26-28 fps) GTA4 is a bad pc port so nobody g

Cons: I did get a DOA the first time i ordered this card but that wasnt Neweggs fault and they let me RMA the card quick got the card in a week after i RMAed it The only downside of this card would probably be the noise I had a 9600gt before i went to 4850's and this card is pretty loud the old style of 4850 was quieter, BUT THE downside to the quiet was that temps on the old 4850s were WAY higher if you're looking for a silent PC build, then stay away from this card if you're a budget gamer and generally wear headphones and dont mind a small amount of sound then you can get this card!

Overall Review: This card idle clocks at 160/500 the fan speed makes a small semi-unnoticeable sound when idle. It folds really well, out folding my 9600gt by over twice the speed small amount of headroom for more overclocking i hit 650/1050 on my card, maybe there is more space for OC'ing but i havent pushed the card to the max

Pros: Best bang for the buck card out there at the time of this writing...aside from possibly the HD4830...and even more, in many "official" bench marks and well respected websites this card out performs other cards with a higher price tag. Look for your self... At a 1440x900 resolution...this card will be all you need. Not many games out there that even give this card a work out. After comparing with a friend's card...this cooler does work substantially better than the regular cooler, but if you intend to volt mod you will want to get some thing better. I just have it OC'ed to 715 on the core and 1075 on the memory with out a volt mod and my temps are fine with the included cooler.

Cons: ATI Drivers have always been a thorn in my side. They work just fine, but the CCC is clunky. I ussually go for third party drivers to aviod it. It really is not much worse than the nVidia Control Panel I guess...so not much of a con.

Overall Review: For those of you with driver issues...welcome to computers. Some times you have to play with things. If you don't like it, get a console system (newegg sells them at pretty good deals). Getting my game to run right is half the fun of playing PC games. It will not be any better on the green side of the fence either. And that review about newegg not acepting a return should be deleted. Even if it has been 30 days they will still allow an item to be exchanged for replacement. Unless it was open box...even then if you call you might get surprised. Newegg's customer service sets the standard in my book.

Cons: Just to be nit picky, it took a lot of pressure to get the 6 pin power connector from the PSU into the power slot on the card. I didn't even bother with the rebate. Also, beware that installing this card will substantially increase your addiction to gaming. . .

Cons: Some lower res. videos seem a little more pixelized on my monitor than my old NVidia GeForce 7950GT, but that's probably just a driver setting. Don't let that discourage you. I haven't figured out how to disable the ATI system tray icon yet.

Pros: This card is amazing! Not only is it cheaper than its nearest alternatives, but it runs cooler and uses less power while getting the same results! I'm averaging well over 60fps in Team Fortress 2 at 1680 x 1050 @ full settings. I've always been a bit of an nVidia fanboy, but this card has sold me on ATI! Highly, highly recommended for someone who wants the most bang for their buck in the sub-$200 price range.

Cons: This rebate has me a little suspicious, but the cards is worth the price even without the rebate.

Overall Review: Make sure you get this version with the newer larger heatsink/fan, my card idles at 37'C at stock fan speeds! After hearing about the single slot cooler cards reach 80'C or more, I can't believe how cold this cooler keeps mine. Also, pay no attention to the horror stories about needing large power supplies. I have a modest XClio 460W and my system is as stable as it ever was.

Pros: If you are a gamer interested in a great low price video card, then look here. This card is absolutely outstanding. I have overclocked this card to 670 core and 1090 memory and runs 45 degrees max. It can handle Crysis on ALL very high settings @ around 20 fps @ 1440x900 resolution. I have also ran Stalker Clear Sky maxed out, and Oblivion maxed out with great results. Not to mention its beautiful Blu-ray capabilities. This baby is half the cost of the higher end cards, and can handle anything you can throw at it. You don't need a x2! Oh, and the noise? Who cares. I maxed out the fan and can't hear it over my already loud case. Also, comes with great accessories :)

Cons: Huge!! It was such a tight squeeze into my case, I had to move my hdds forward about 2 inches... but this card is still about the same length (if not less) as all the other competing cards. Besides that I have no true cons.

Overall Review: The drivers that come with the card are outdated. DO NOT INSTALL. Download the CCC 8.10 drivers from sapphire's website! Install those right after you insert this card. From there you can manually adjust the fan because it comes stock at 20%. Just adjust from the overclock menu. And I do recommend overclocking it to my settings. Visible performance boost. Overall, this is a great card for any gamer. It is also the best priced card available. No need to look anymore for a better card.

Pros: Great performance-aftermarket cooler makes this thing run quite cool. I was worried about temp after reading other reviews before I bought, but the fan is huge on this thing and keeps it nice and cool. Performance is outstanding for the price. Dollar for dollar, it can't be beat. Just make sure you download the newest drivers from AMD.

Cons: I had to give this 4-stars because of the wack rebate. Sapphire uses myrebates411.com to process their rebate and they require you to mail in the UPC label, but they say the UPC MUST CONTAIN THE SERIAL NUMBER TO QUALIFY. Guess what? The UPC on the outside of the box does not contain the serial number. So its wack! I thought about mailing it in anyway to see what happens but they are very clear on their instructions that no serial # on UPC means no rebate given. This is why rebates are always wack!

Overall Review: Sapphire, get rid of the rebate and stop using myrebates411.com to process your rebates.