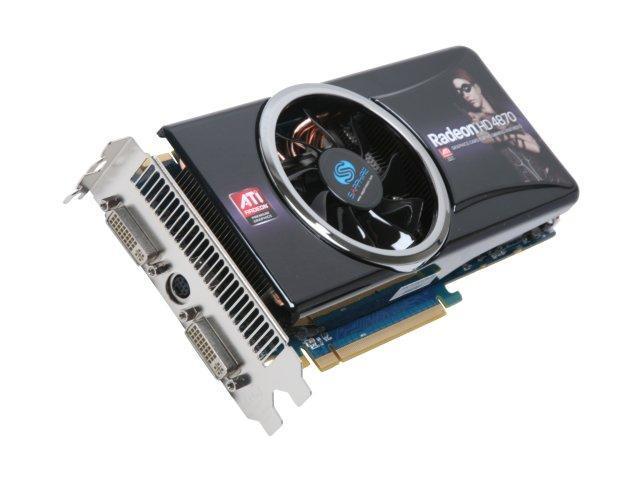 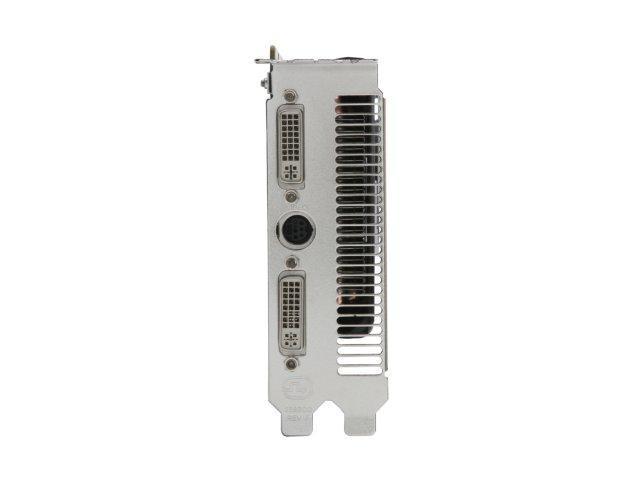 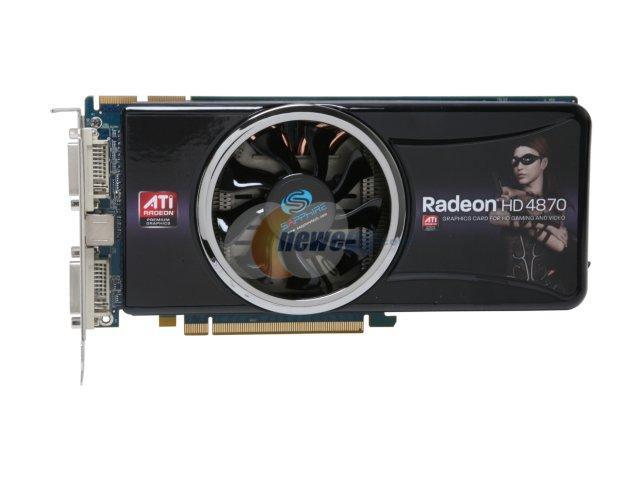 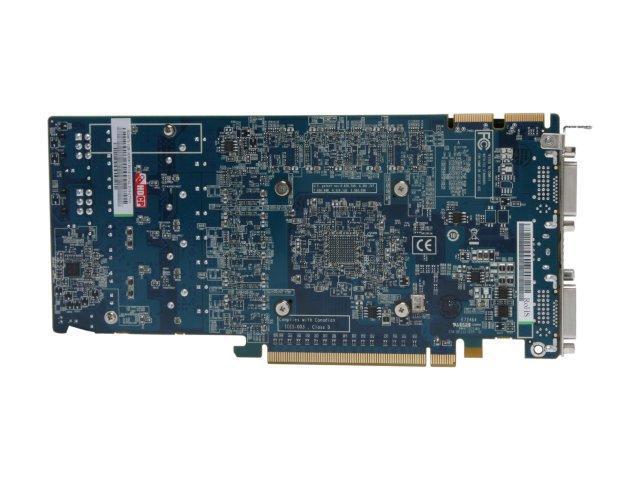 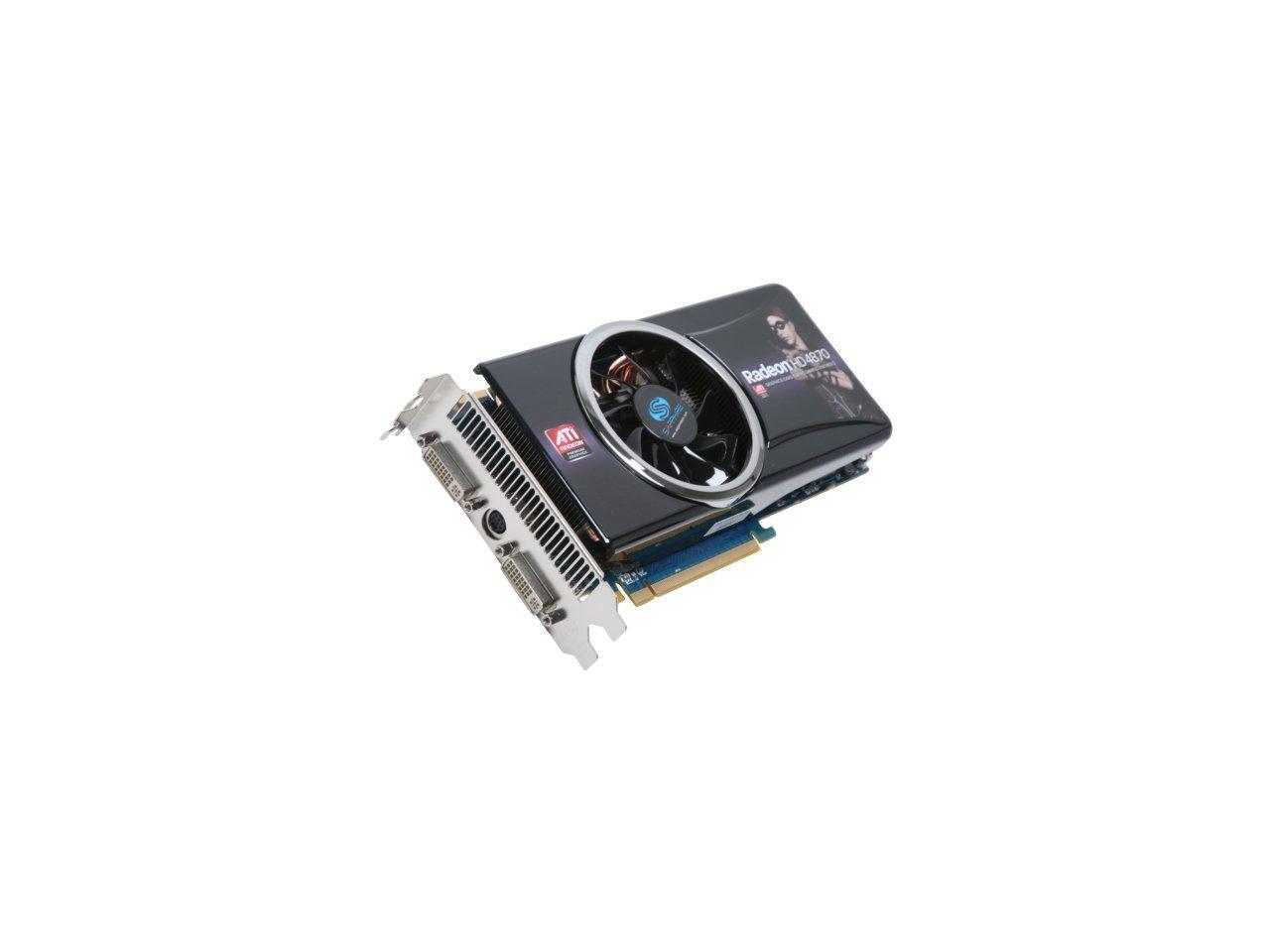 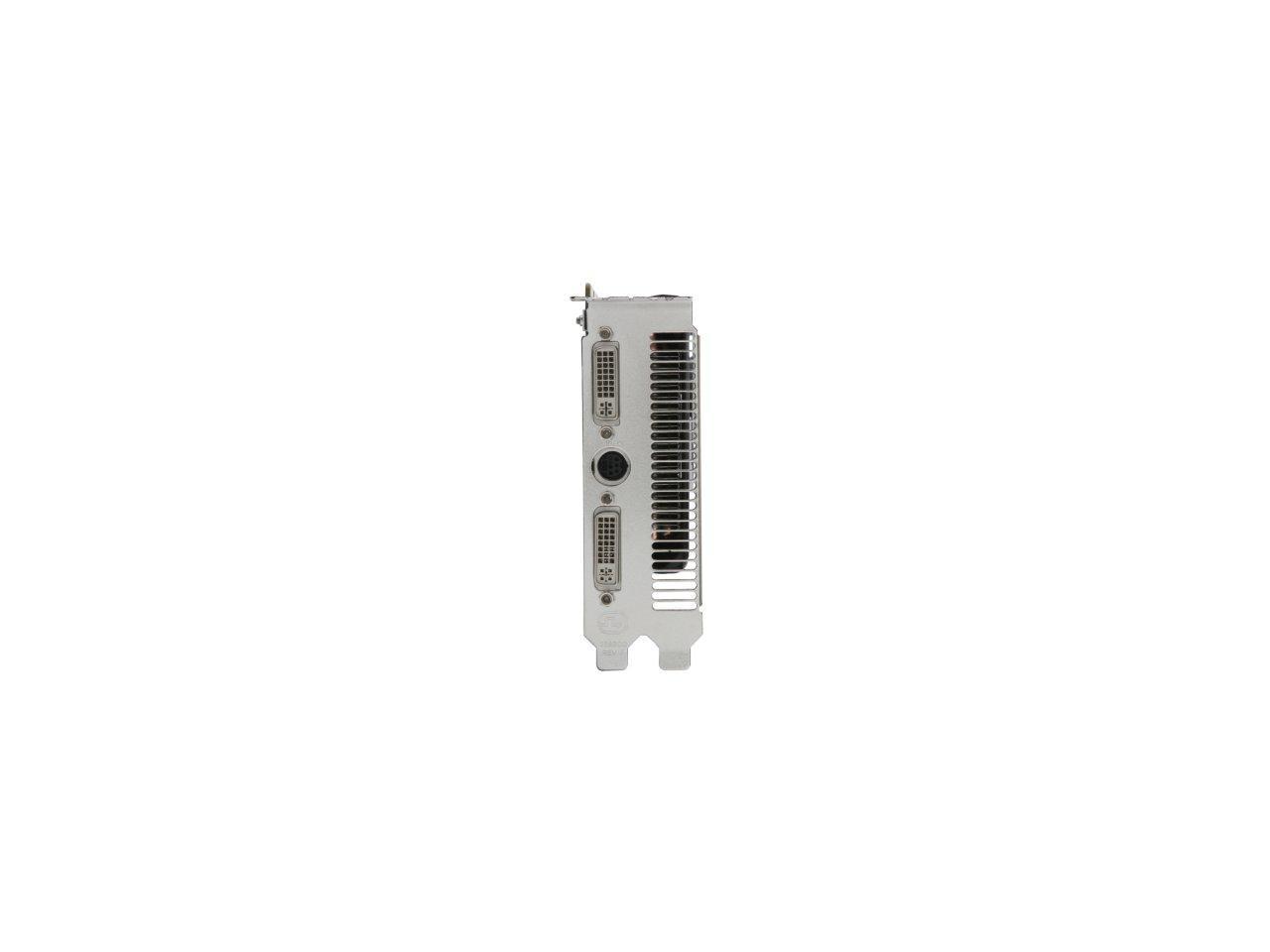 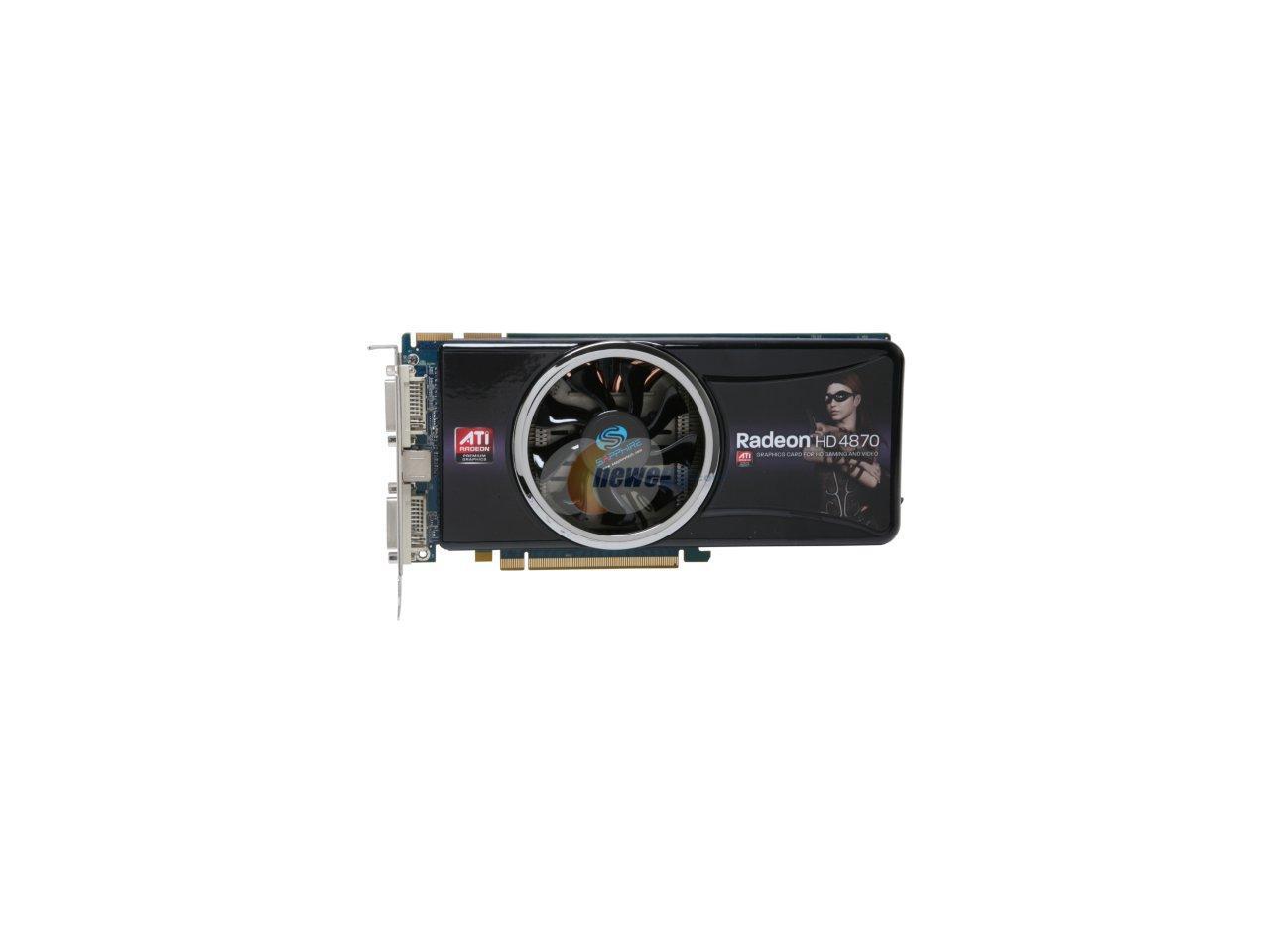 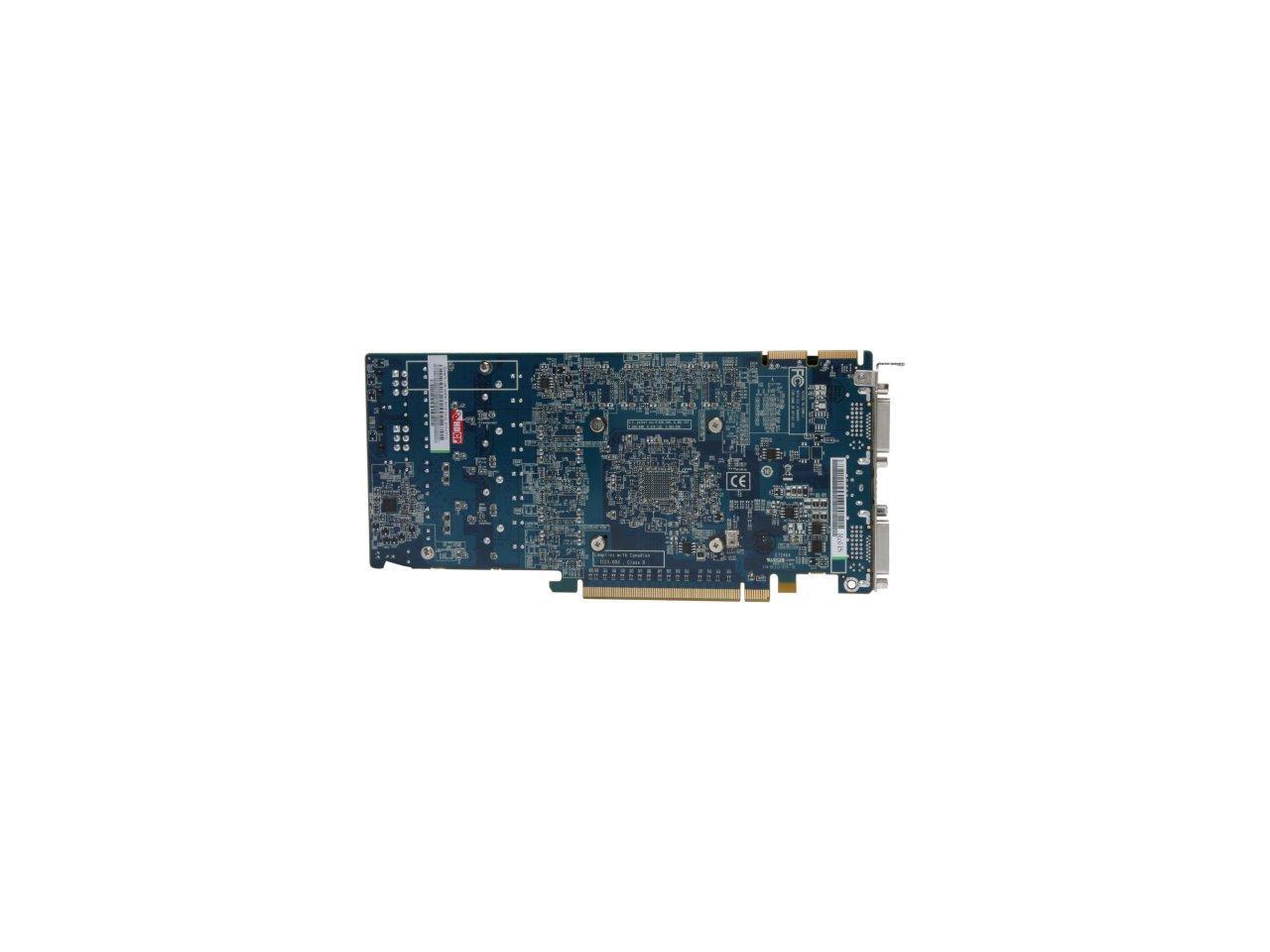 (78) Write a Review
OUT OF STOCK.
Specs
Reviews

Pros: Performance unmatched for this price level. Popped it right into my Windows 7 64-bit system and worked perfectly on first boot. Probably the easiest gpu installation I've dealt with since I began building PC's about a decade ago. A steal compared to the X2 gpu's out there that are, in my opinion, way overpriced for what they can do. This card, oddly enough, actually weighed less than the old 2900 Pro I replaced. The cooling system on this one seems to be far more ellaborate and bulky than the 2900's was, but this card seems to weigh about half the 2900 did. A nice surprise as I'm always wary about stress on a mainboard. My Zalman 9700 already puts enough weight on it.

Cons: Not much of a con, but it does get a bit warm. 55C idle, 76C on load. I did notice someone else mentioning the power ports on the end of the card being a con for them, though I'm the opposite. I rather prefer them on the end rather than jutting out the side as did on my 2900 so as they don't run the risk of getting caught up in my 250mm door fan.

Overall Review: Using this gpu in a Thermaltake Armor full-tower, on a Gigabyte EP45-UD3P, Intel Q9550 @ 3.0GHz, 8GB DDR2 1066 and two Samsung lcd's, 22" and 19", on Windows 7 Ultimate x64 v6.0.1.7100. It's ridiculous how much of an improvement I saw in performance, not only in games but with the media editing I do for work. Game-wise, I tested the card on Empire: Total War, max settings w/ x8 AA and x8 AF. Getting a smooth average of 50fps on both campaign and battles. Very nice. For comparison, I was only able to run Empire on roughly 40% settings with no AA and Trilinear to achieve the same framerate. Very pleased with this product. Have always bought Sapphire through Newegg, who, as always, got it here earlier than expected. A++

Pros: Fair price. Good performance. Seems to be quiet... (of course after a 8800gt everything is quiet) It was easy to install and configure.

Cons: It did not come with a Jessica Alba calendar :). Seriously, nothing I could, or is worth to mention.

Overall Review: I have had it for only a day. With a duo 8500 cpu, 6 gig ddr2 ram and a Gigabyte ud3p mainboard it gives me 25-40 fps in crysis warhead with enthusiasm settings and 8xAA, running under Windows7 with generic driver. X3 TC also running smooth. Idle temp, is 58Celsius, and 78Celsius was the highest I measured after an hour of playing with closed case. Shipping took the usual 2 days, arrived promptly. Considering getting a second one and link them. I am using it with a 460W Zalmann Power supply and so far so good. If you have cheap PS, you should go with the 600W ones. 5 eggs bec. I am satisfied so far...

Pros: - Great performance. Runs all the games I have tested so far at max settings and my screen's native resolution (1680x1050) without a hitch. These include Batman AA, GTA 4, Crysis, Mass Effect, Prototype and Resident Evil 5. And by without a hitch, I mean smooth as butter. - Temperatures remain at optimal ranges. It's around 58C idle and 65C load. Heatsink and fan makes the card look sweet too. - Quiet. Most of the sound from my desktop comes from my CPU cooler. - Great accessories. Sapphire makes sure you have every video adapter and cable you could possible use like DVI-HDMI and DVI-VGA adapter, HDTV cable, SVideo-Composite adapter, 2x 4 pin to 6 pin power adapter etc.

Overall Review: The power connectors are at the end of the card, so make sure there's room in your case. Also ignore the disc that comes with the box. You can get the most updated drivers from ATI's website.

Pros: For the price you get great video games playback. Everyone states the fan is a little on the loud side. I can not hear it over the 120mm (3 of them) fans running in my case.... I know everyone is getting the 5000 series but I can not see spending $$$$ just to get directx 11 and a little more speed.... I will wait till the 2ed generation directx 11 cards from ATI com out before upgrading again.

Pros: Extremely fast - outperforms the SLI 8800GT setup I had before this card. The fan is relatively quiet and the card runs cool. It may cost a little more than other 4870s but the better fan and heatsink is well worth it. I have had too many cards die because the cheap fan failed. This card has a hefty fan and heat sink and doesn't have to run full speed to keep the card cool.

Overall Review: Spend a little more and get this card over the cheaper versions. The fan and heatsink are well worth it.

Overall Review: This is my first build and all seems to be good. I ran 3dmark06 and got a 13664 score with my cpu only getting a 3200 score. Didn't overclock card yet but if anyone could help and let me know if the video card score is good please hit "yes" and if scores are low please hit "no" where it ask you if the review helped.

Overall Review: This card is awesome, i'm really amazed at how big a difference this is from the 4850 i used to use, and with the 1GB of memory i get really fluid performance. I was able to fully overclock the card, don't know if i got lucky, but it seems all my 4000's can do this. Great! Like i said in the pros, you really wont need anything more than this. Even in terms of playing crysis i was able to stay above 30 frames under max (except aa, had that at 4x) and at HD resolutions. Finally finished playing through warhead with this.