OUT OF STOCK
Sold by: Newegg
Shipped by Newegg
Volume Discounts Available
This item is currently out of stock and it may or may not be restocked.
Out of Stock
Add To Wish List 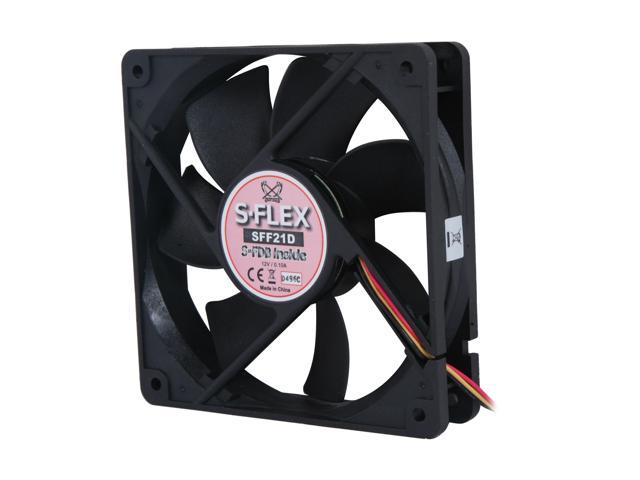 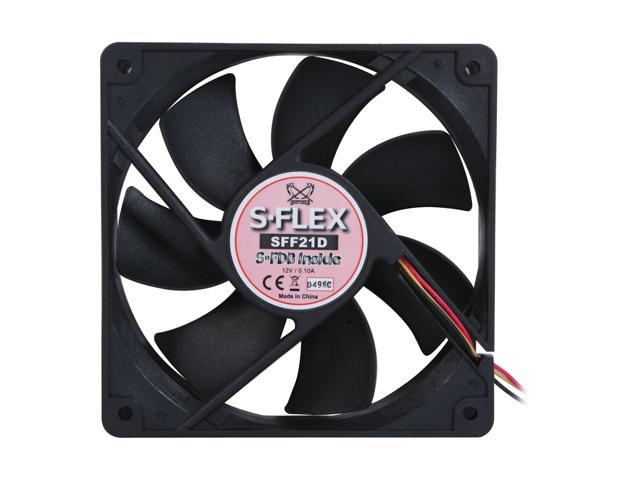 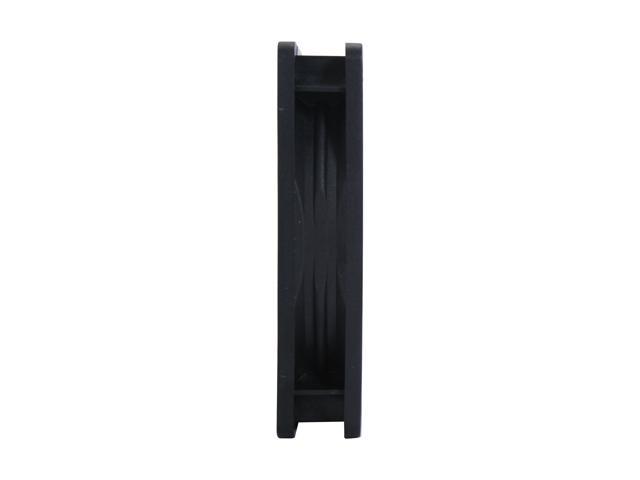 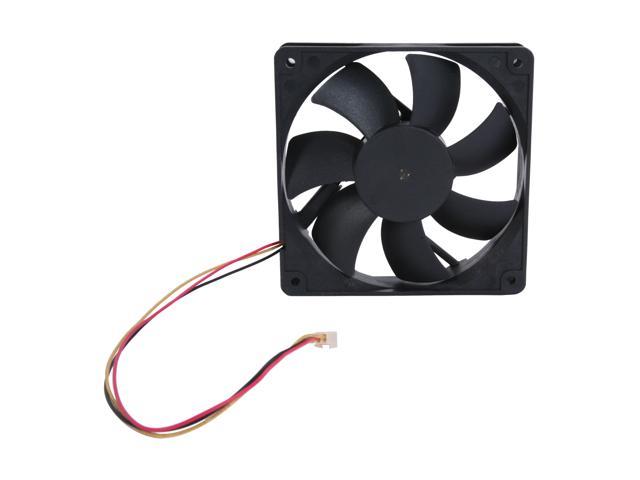 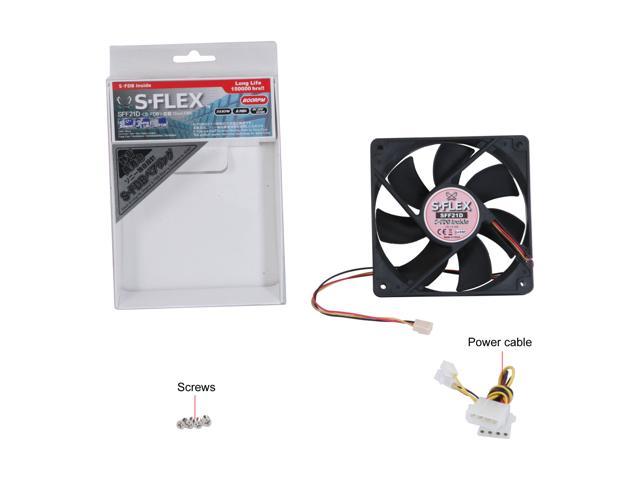 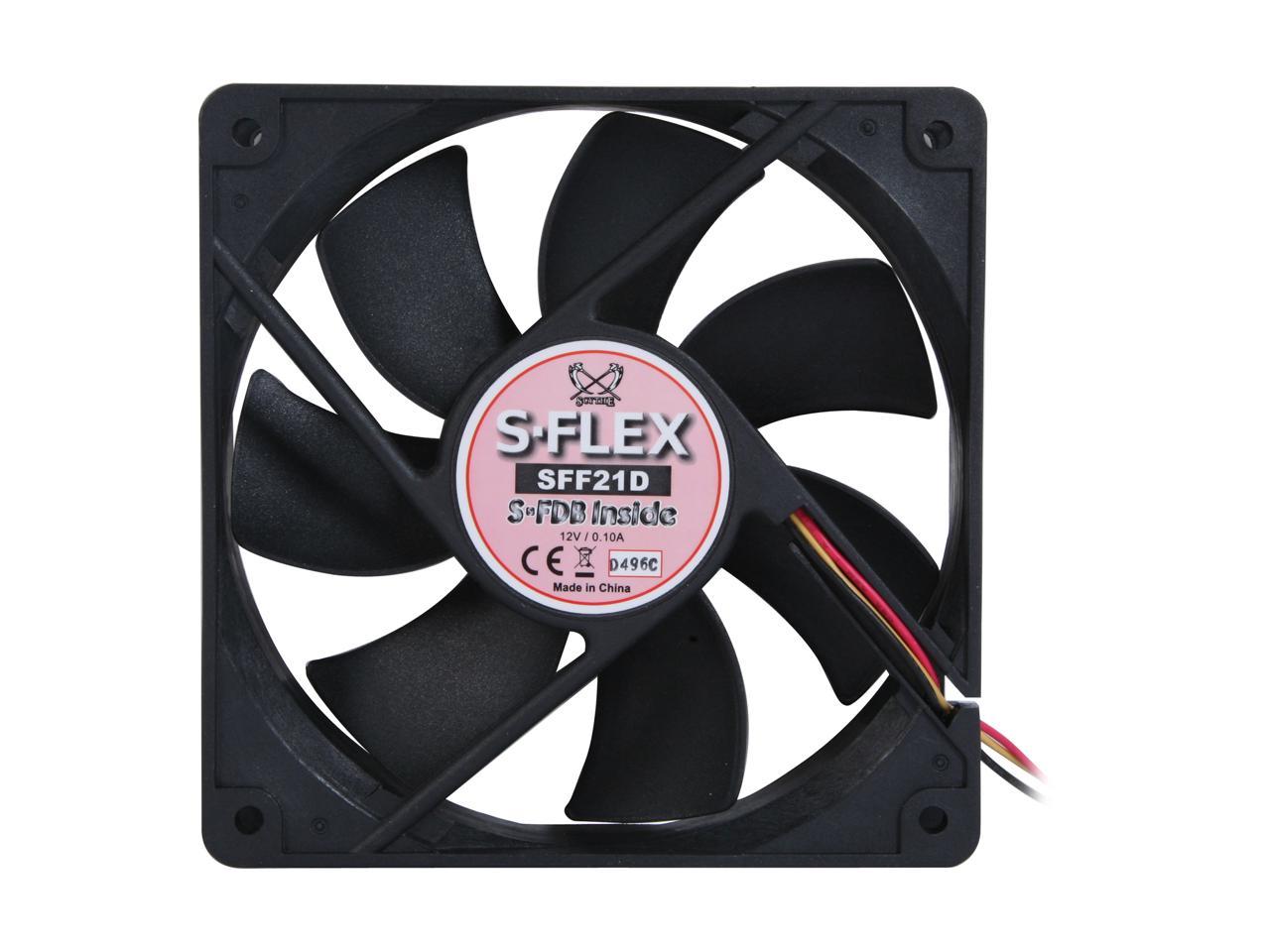 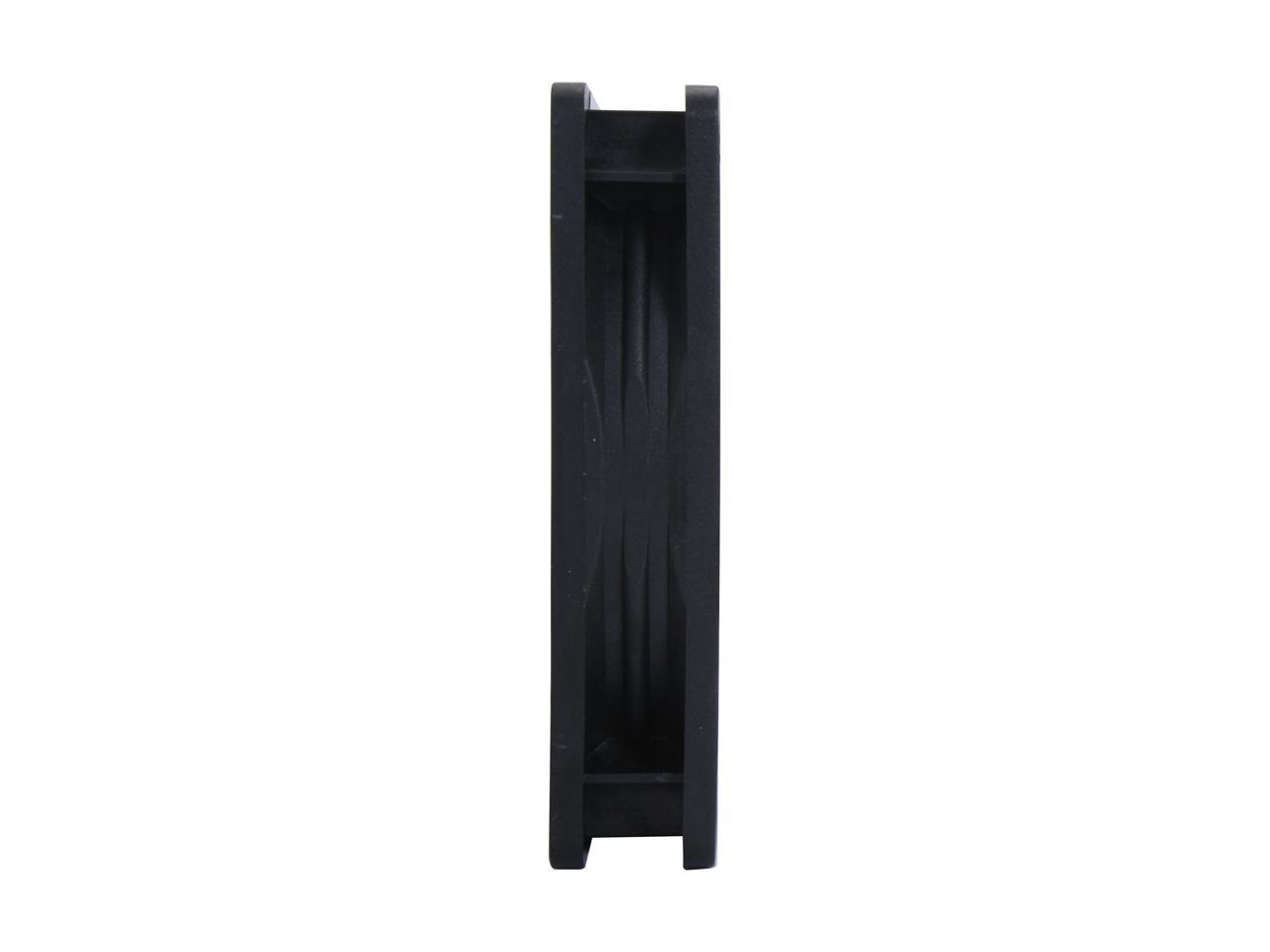 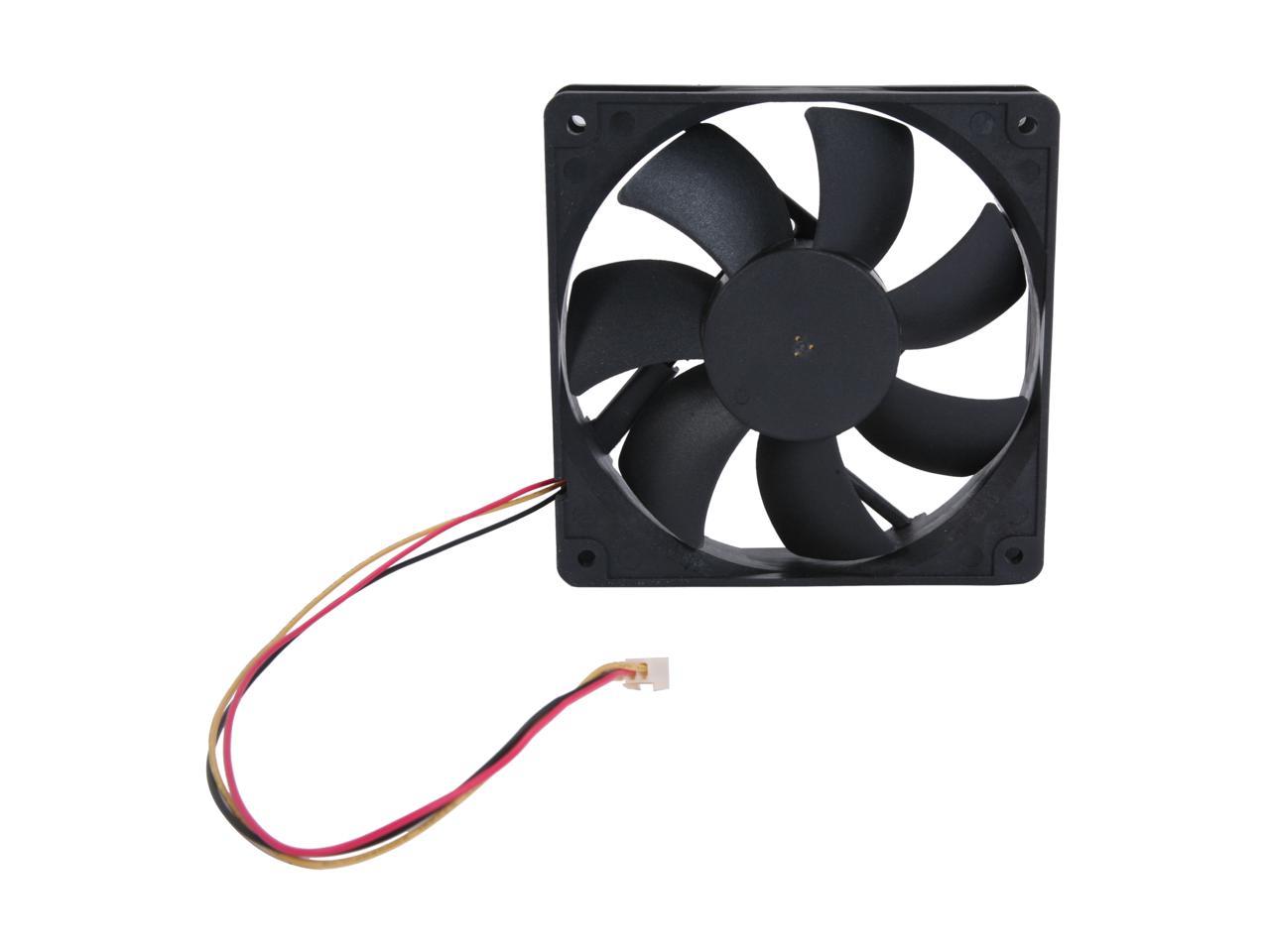 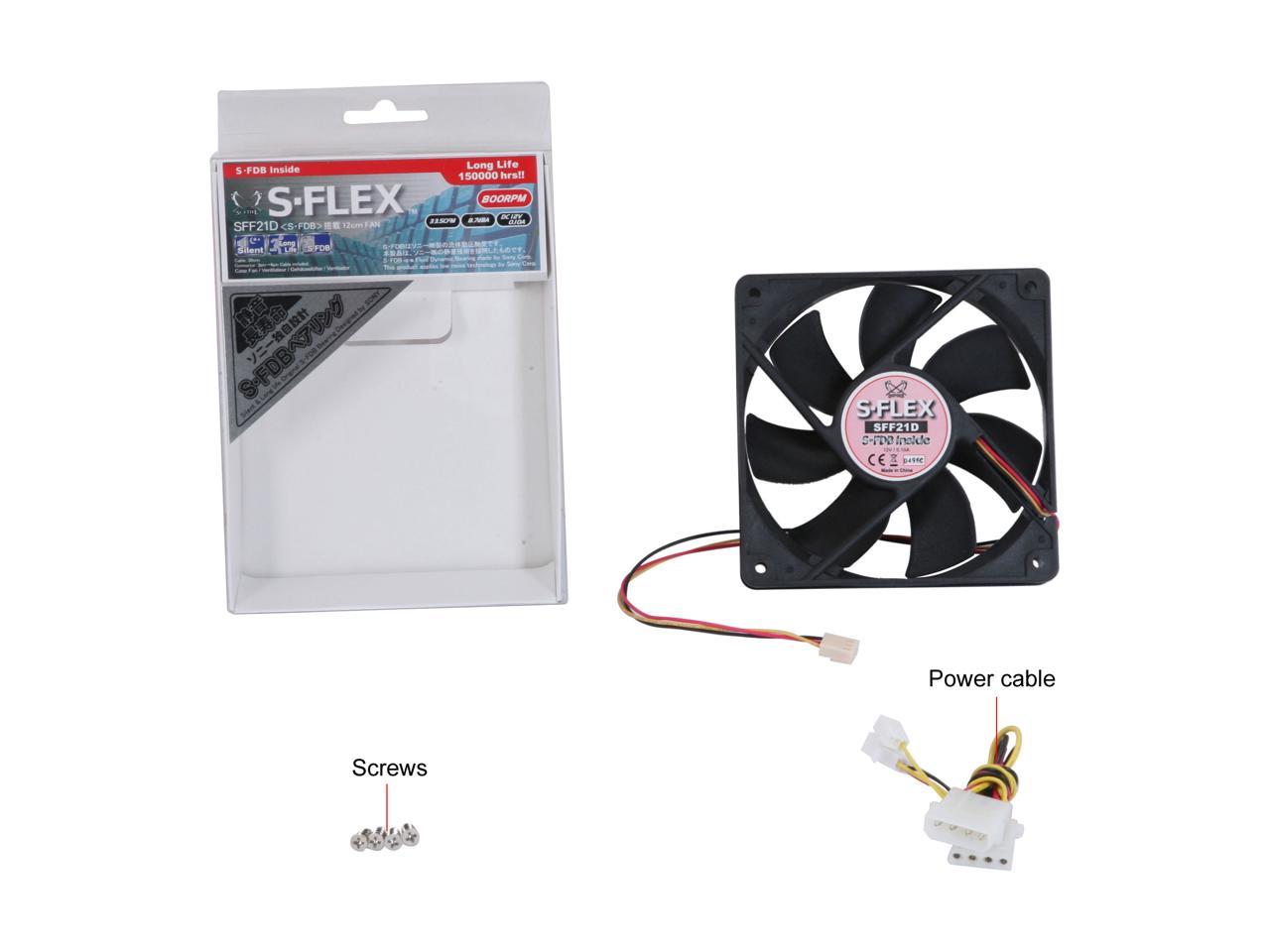 (388) Write a Review
OUT OF STOCK.
Overview
Specs
Reviews
The Scythe S-FLEX SFF21D is equipped with the high quality quiet 12cm fan with FDB (Fluid Dynamic Bearing) technology. This "Fluid Dynamic Bearing" technology from SONY Corporation can provide a dramatic reduction in fan noise and prolong the life of your fan.

Overall Review: I've reached that point where I am no longer forced to compromise so much to keep my budget down. I dont mind paying a premium price for a quality product and so far these fans have not disappointed. I have used all 4 of the SFF21X fans and its important that you read the specs! The 21D is an awesome quite fan, but does not move much air. As fan speeds increase, noise increases ( I should not have to explain that, but from reading others reviews ... ) If you need to move more air then you should be looking at the E,F and G versions. If you use the "manufacturer product page" link that Newegg so graciously provides us with, you can find a great table with RPM and Noise specs for all 4 models. Dont blame a low RPM fan for not moving massive air ... Dont blame a high RPM fan for being loud. Read the specs, make an informed choice and these fans will not dissapoint

Pros: Perfect for a low-power silent PC. I have a little mini-server/music PC in my bedroom with this fan and a SilenX 80mm in it, and this fan seems to make just a bit less noise than the SilenX. Now THAT says something about just how good this fan is. The manufacturer claims it can last up to 150k hours. Neato. I don't know if I'll even still need this fan by the time it's ready to kick the bucket, although it's good to know they're promising a lot with this product. But even if it dies tomorrow, it will have been 100% worth what I paid for it; this fan has served my server well for at least a full year now (total) of uptime, often running uninterrupted for weeks on end, spinning as smooth and as quiet as it was on its first day of use.

Cons: Could there seriously be anything wrong with an 8.7 dBA fan that can move 30+ CFM - a 120mm fan that moves as much air as the cheap one that came with your PC case, but that makes less than a fifth as much noise? Well, it appears that the only difference between this fan and others in the S-Flex series is the speed at which it runs; if you look at the specs of the other S-Flex fans, you'll notice the noise they put out is roughly proportional to their speed. That being said, it's rather strange that this fan is more costly than the other higher-speed S-Flexes, which feature identical design and the same amazing S-FDB.

Overall Review: If you want more airflow, don't complain that your hot, massive gaming rig isn't sufficiently ventilated because you're relying on one of these to move air. Just get an S-Flex running at higher RPM's. Seriously, what can you expect of any fan running slower than 1000 RPM? This fan is ideal for a cool, quiet, low-power PC, unless you have several of them working together in your case (which would probably be awesome, although I can't say I've tried it). Also, maybe if Scythe combined the Gentle Typhoon's forward-sweeping fan blade design with the S-FDB from the S-Flex series they'd have a silent 120mm fan that could compete with SilenX's.

Pros: This thing is, for all intensive purposes, silent.

Cons: The rotation speed would appear to be less than the advertized 800rpm, and the CFM is not 33.5 ... there's just no way.

Overall Review: All and all, this thing does move some air. For my purposes, swapping out the 120mm fan that came with my new PSU, this worked like a charm. My computer's in my bedroom, and I have a fanless graphics card, and only one other 120mm in the rig. I upgraded the PSU to get a 120mm in the mix to pull out a bit of ambient heat, and it did the trick, but the rig had a noticeable noise coming from the fan from the PSU. So, I checked, and changing out the fan was going to be easy, so I got this one. The fan is silent, and overall the 120mm moves more air than the old PSU with a 80mm fan (and bad design that didn't really contribute to cooling). Now, I have silence and decent performance in my MCE machine ... I get a good night's sleep, and my girlfriend hasn't kicked me and computer out of the house as she once threatened. :)

Pros: I put 5 of these in a Cooler Master Stacker 830 Evolution RC-830-SSN3-GP case(Wait For Sale!). 4 over the motherboard and 1 in the top. These are nearly silent. The air makes more noise than the fans do. These are very low airflow which is exactly what I wanted. In groups they allow for very equal, adequate, and quiet cooling over a large surface area. Faster/High flow fans do not always mean cooler temps. These are the highest quality fans I have ever used.

Cons: Price. Price. And Price. These things are not cheap if you use them the way I did. I ordered them with other things over a few months to spread cost. Crazy how much you can spend on a fan. Luckily Newegg usually has them 1/2 price.

Overall Review: A good tip however is to order these with something else to avoid paying the shipping costs associated with multiple fans. I did this and the shipping was essentially free. Newegg does a great job with combined shipping if you plan your orders well. Easily the fairest shipping prices on the Internet.

Pros: I have never heard a fan as quiet as this one. Seems well balanced and does not vibrate while it spins.

Cons: Fan may not move enough air for overclockers or cases with very limited air flow.

Pros: Ridiculously silent. When I turn on my computer without any hard drives, I can't even tell it's on. I have two of these (one for intake and one for exhaust) in a Rosewill R5601-BK aluminum case and they're keeping things extremely cool despite the low CFM. I think I'll start using these fans in all my computers from now on.

Cons: If I were an overclocker, I *might* not appreciate the low CFM. Luckily, that's not the case.

Overall Review: I don't run a fan on my processor (Scythe SCNJ-1000P passive heatsink), and yet one of these fans at each end of the case is efficient enough to keep my processor (Athlon64 3200+) below 40c at all times, even during heavy work. The only sounds out of my computer come from the hard drive, the DVD drive and the power supply (Rosewill RV400S-2 silent with its own 120mm fan). The motherboard is also completely fanless (MSI K8NGM2-FID)

Pros: - Very quiet - Decent airflow for the speed (anybody expecting high airflow needs to read the specs before buying these, or any other fan) - No LEDs or flashy colors, it blends well with my case (Antec 300)

Cons: Somewhat pricey, but they last forever. You don't really need to "upgrade" fans unless things are getting really hot - you can use them for new builds.

Pros: I have two of these in a HTPC plugged right into the motherboard. I can't hear them at all unless I unplug the (also quiet) processor fan. Never gets over 40 C

Cons: Not really a con, but if you're building a super awesome overclocked ultra gaming machine, they make fans for that and this isn't it...