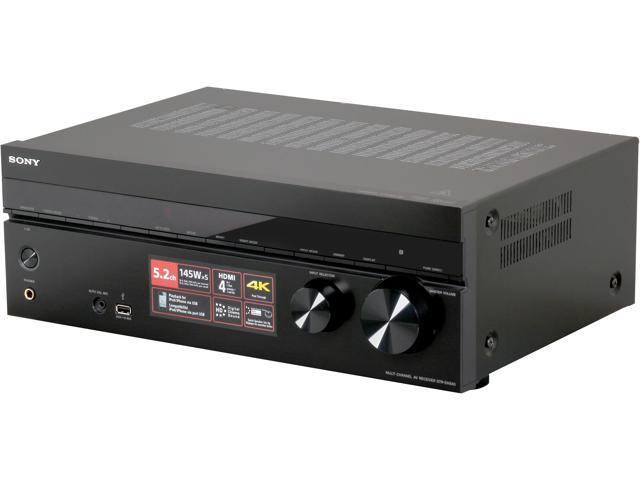 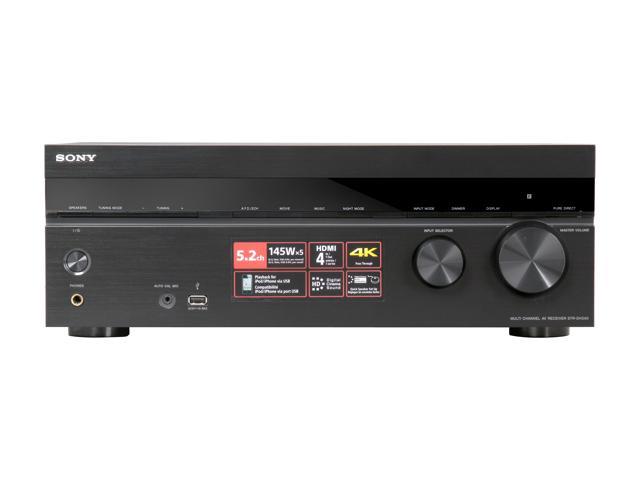 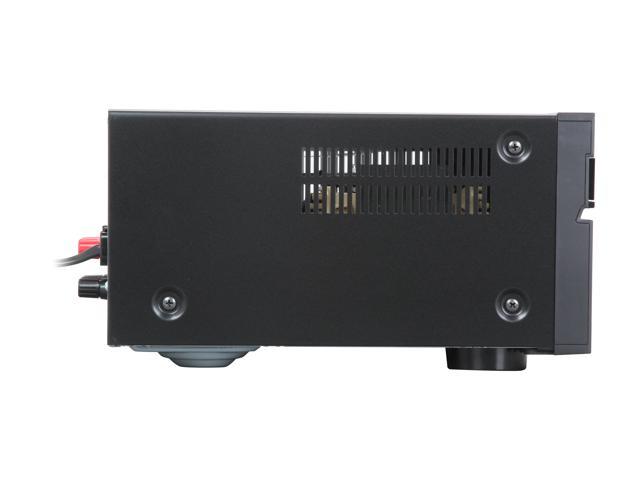 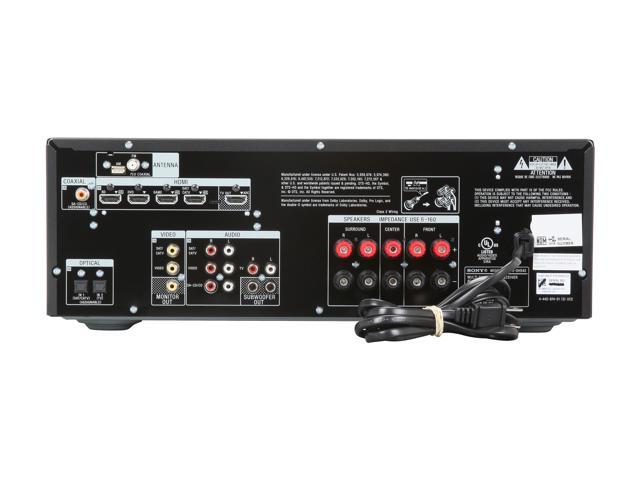 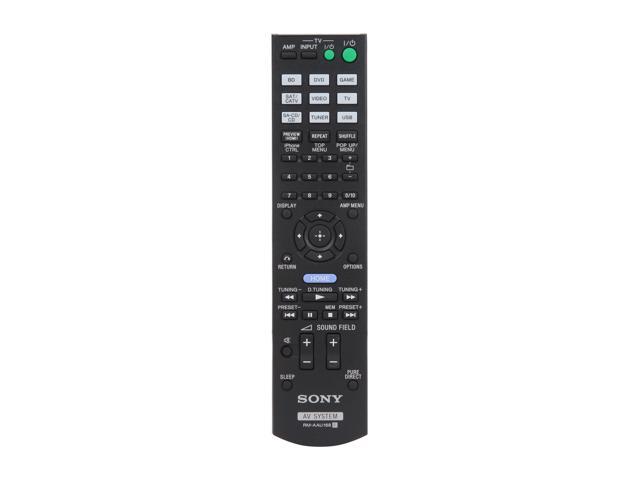 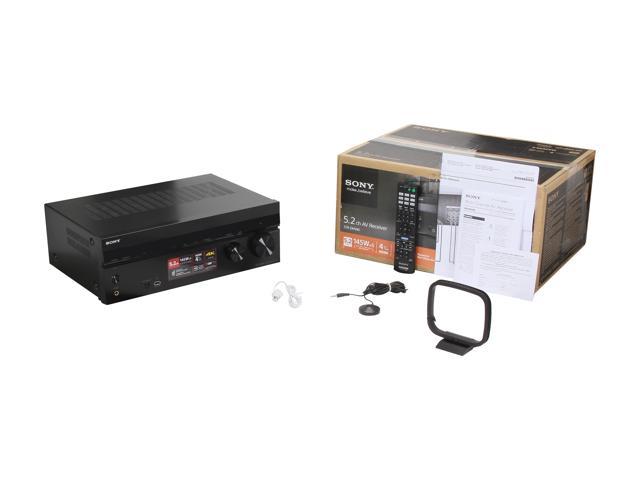 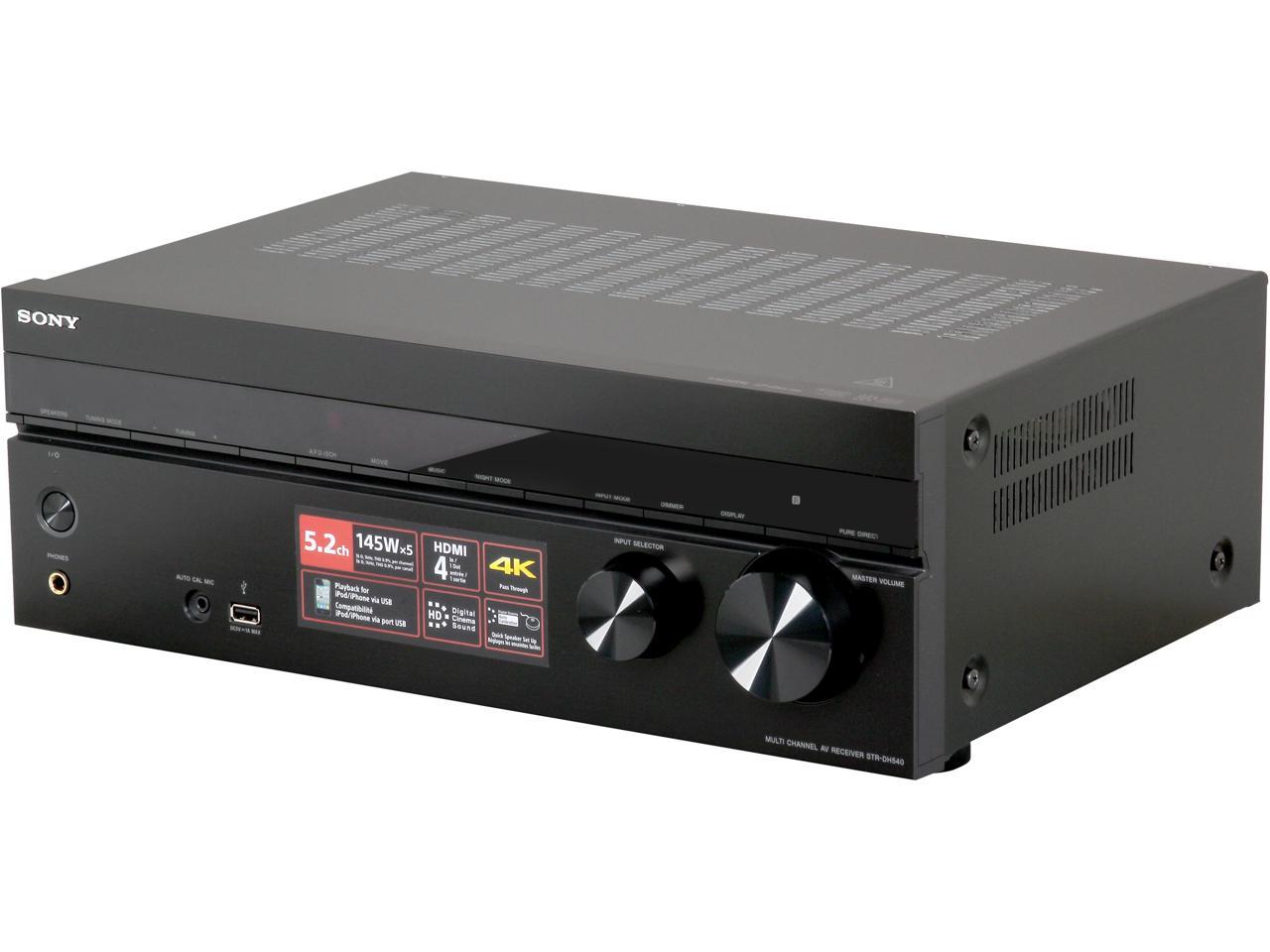 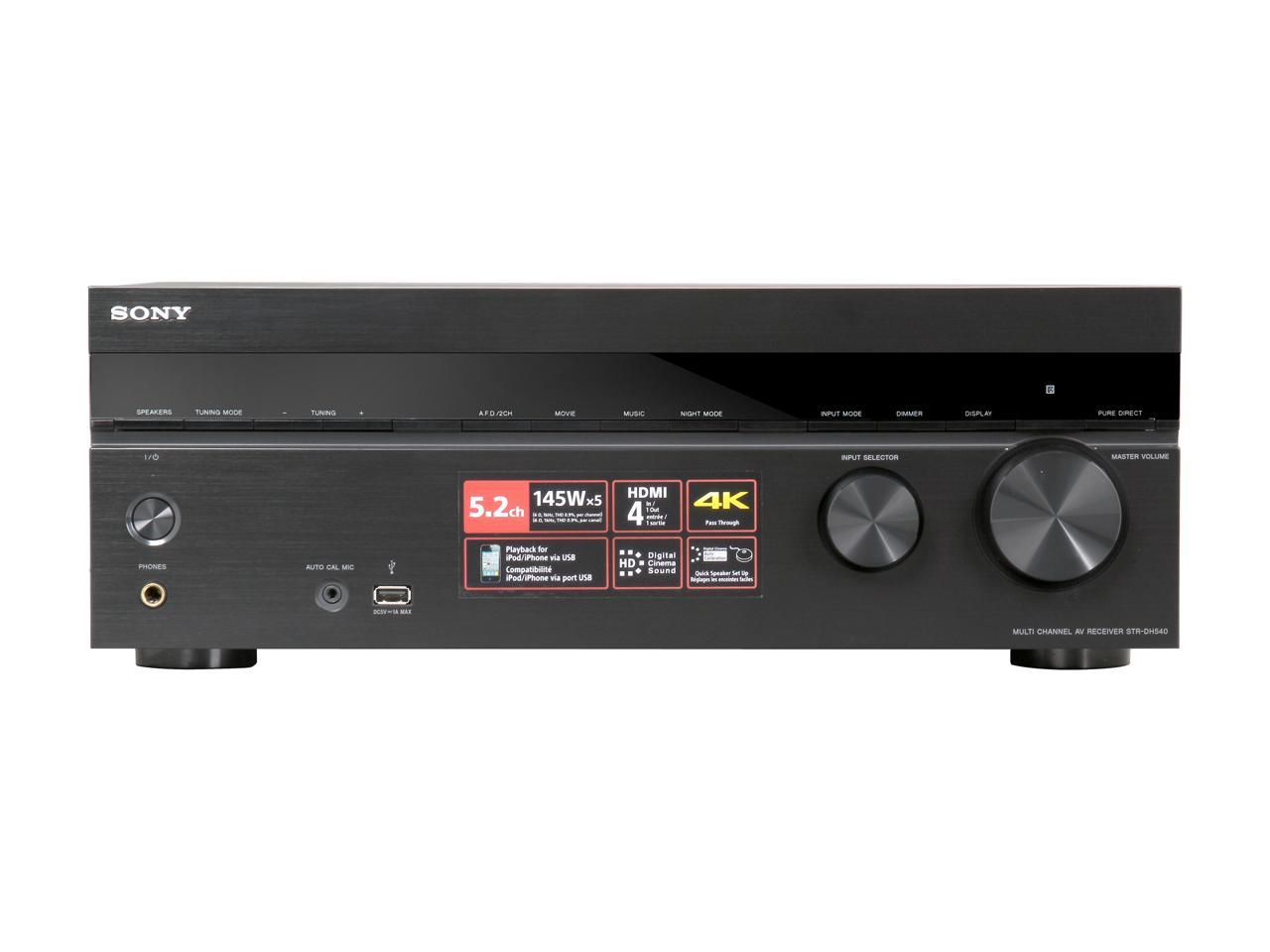 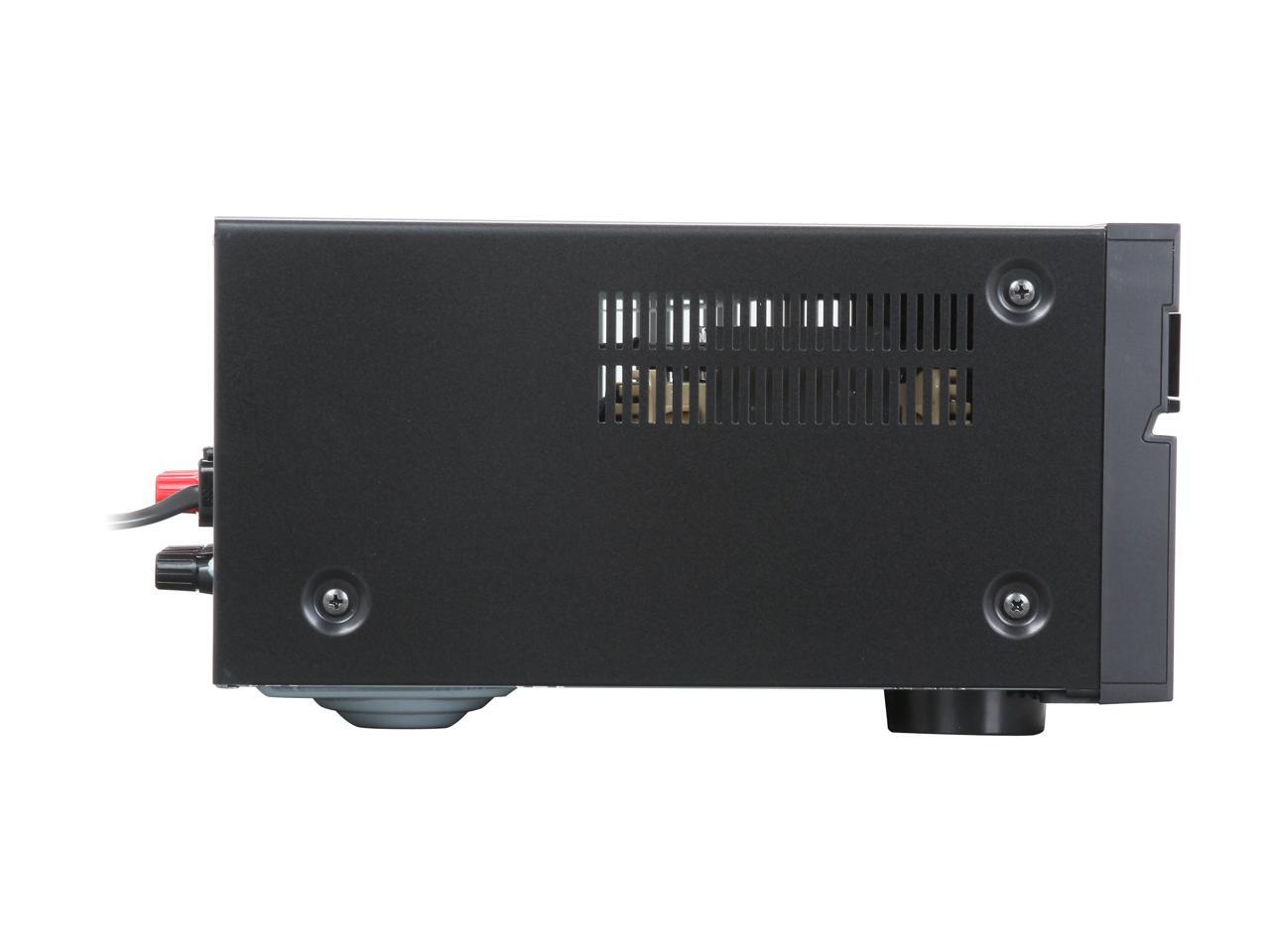 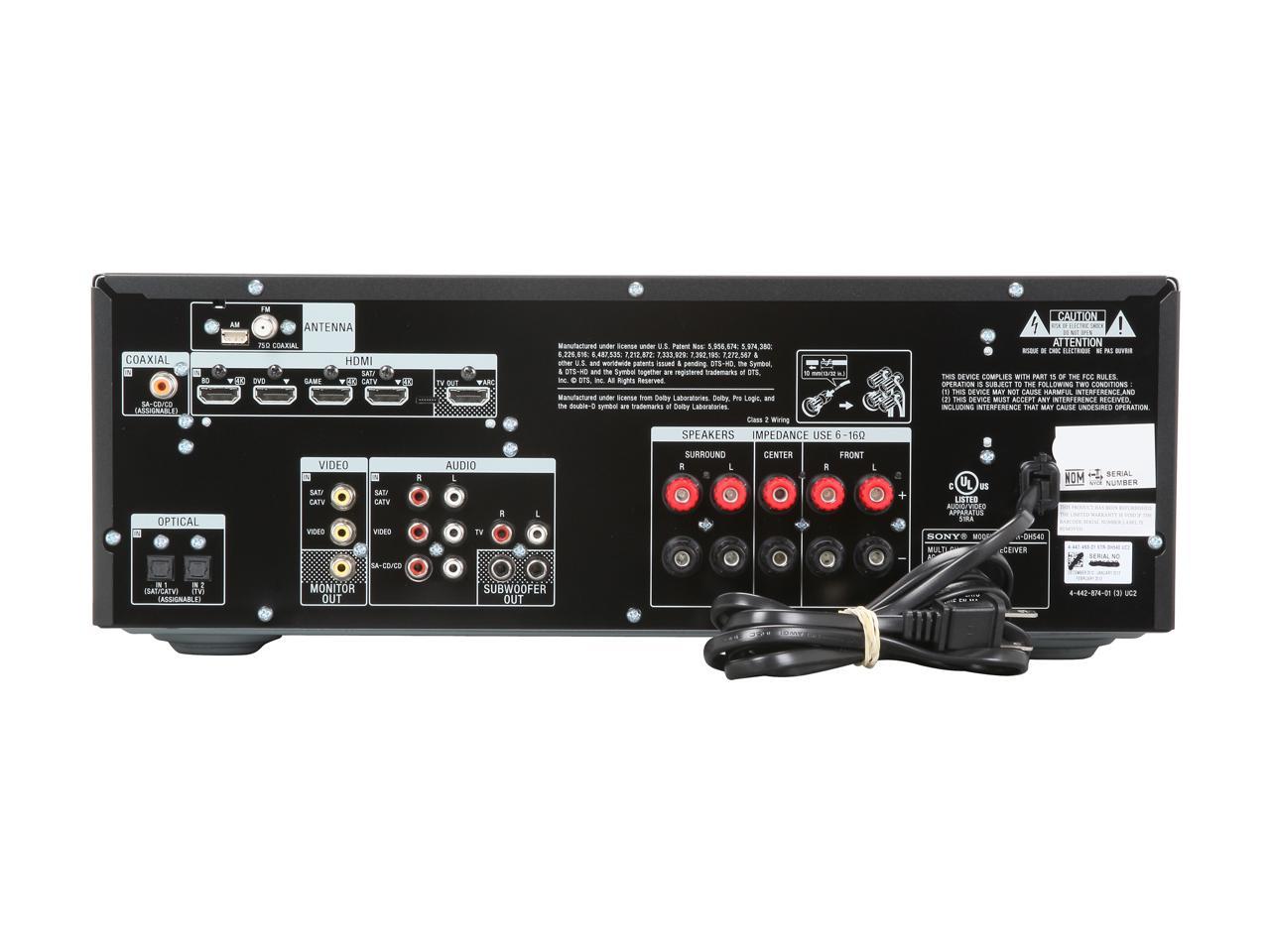 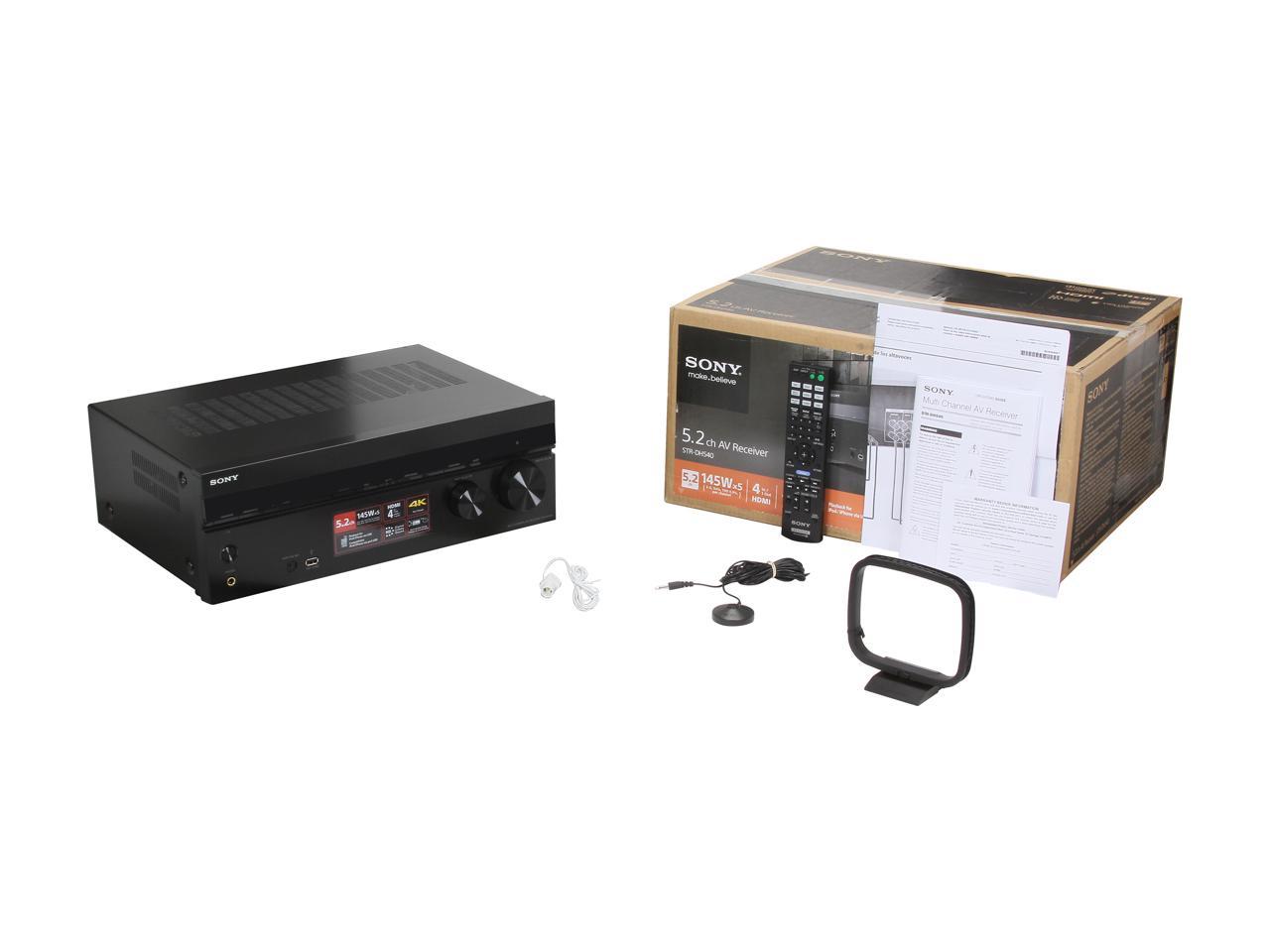 This means the product was tested and repaired as required to meet the standards of the refurbisher, which may or may not be the original manufacturer. Any exceptions to the condition of the item outside the manufacturer’s information should be provided in the listing, up to and including warranty details.
(16) Write a Review
OUT OF STOCK.
Overview
Specs
Reviews


The STRDH540 5.2-Channel 4K AV Receiver allows you to bring the excitement home with its 5.2 channels, 725 watts and iPhone and iPod connectivity. It also handles all of your components with 4 HD inputs and 4K resolution pass-through. Now, all of your music and movies will get the multi-layered sound quality they deserve with HD Digital Cinema Sound and auto calibration for easy set-up.

Invite your iPod.
Queue up your favorite playlist or the latest blockbuster hit stored on your iPod or iPhone, all while charging your device*. Plugging it in to the front-facing USB input couldn't be simpler. And since your device stays charging the whole time, it's ready to go when you are. (*iPod support is limited to the following players: iPod touch, iPod classic, iPod nano 1st, 2nd & 3rd generation, iPod 4th& 5th generation & iPod mini and iPhone 3G, 3Gs and 4G models.) Make the connection.
Four HDMI inputs (up to 4K) let you connect a PS3 system, your Blu-ray player, plus another two HDMI-capable devices for high def video and audio. So many versatile HD connection options make hooking up new devices an effortless affair. 4K pass-through.
Future-proof your system and take a quantum leap in video clarity. The STR-DH740 receiver allows native 4K video content to be passed through to a 4K television or projector. Make your next movie night a jaw dropping experience with imagery that is nothing short of revolutionary. Learn more about the Sony STRDH540

Pros: Day 1: so far so good. It's working, its a refurbed unit with a refurb sticker, refurb 30 day warranty card. The remainder of this review concerns the amp in particular, not the refurb part. The On screen display is an improvement over the STRDH700 that this replaced. It's easier to go through the settings on a tv rather than the 1 line display on the amp. Feature rich. Clean display without the typical icons of an amp (speakers in particular).

Cons: There is no way to disable the OSD when you adjust volume, so during a movie a little number shows up on the screen as you adjust volume, I hate that. Set the HDMI audio output to AMP only (instead of AMP+TV), or the amp will force audio to 2.0 no matter the source (5.1 or 7.1 or whatevs). (see other thoughts).

Overall Review: I had a scare, the amp would shut down after 2 seconds. Turns out it was a 1 foot long HDMI cable that I was using to go to a HDMI splitter that sends the signal to 2 devices simulaneously (TV and Projector). I never had that happen, but the amp did NOT like the 1 foot HDMI cable. Replacing it with a 6 foot cable that came with the PS4 and everything works. I set my PS4 to DTS (instead of Linear PCM) so the amp does 5.1. Otherwise, the PS4 sends 7.1 to the amp. But since this amp is only 5.1, Linear PCM would probably work and the amp will blend the 4 surround channels into 2. I'll have to test that. Same with the PS3, I unchecked Linear PCM 7.1 output to prevent all the channels from going over to the receiver but that might not be necessary. I tested 3d passthrough and it works (that was the reason for purchase). Also tested HDMI standby passthrough (PS4, PS3 and Apple TV to TV, with amp off). That works also, which is neat to use because it sends sound to the TV. This is a better alternative than the AMP+TV setting that messes with sound. They should remove the AMP+TV option (which causes audio to be 2.0) and if you want to use your TV speakers just turn the amp off, then passthrough sends audio to the TV. When you turn the amp on, no more sound to TV as the AMP only setting sends audio to the speakers. PS4 forums are filling up with complaints about Sony amps only outputting 2.0 sound, and it's always because the HDMI Audio is set to AMP+TV. The only thing I don't like is the little volume number that lingers on the screen when I change volume during a movie. There should be a way to turn that off but I looked at every menu option and can't find it. The auto sound level adjustment is amazing, it is able to detect the distance to each speaker to the inch. Really neat to see and hear it in action. As this is a refurb, I only have 30 days to make sure everything works, but so far so good. I'll write again if it dies prematurely. I tested every input including ipod USB support. Time will tell, but the thing arrived with no fingerprints or any visual wear and tear at all, and it came with all the peripherals (fm and am antenna, mic for auto adjustment, manua, remote (but no batteries).

Pros: Extremely high quality! This is a really nice piece of equiptment. Four different HDMI ports that you can arbitrarily switch to and from. iPod control. the capability for L+R Front, L+R Back, Center and 2 subwoofers. This device has it all! I love it!

Overall Review: Looking back, I should not have purchased a refurbished receiver/amp. Or I should have bought a different brand. It's not worth money. I've had it for 7 months and HDMI DVD port is not working.

Pros: It sounds good when it actually works.

Cons: Never before have I seen a piece of equipment this defective by design. The biggest flaw being a PROTECTOR "feature" that suddenly shuts down the device for seemingly no reason at all. Upon closer inspection I believe it is related to overheating, but it is not even that hot when it occurs. Here is Sony's explanation of the issue: https://us.en.kb.sony.com/app/answers/detail/a_id/39211/c/65,66/p/41901,43145,92877,70333/ There is no way to turn this "feature" off. So either the device is way too prone to overheating or the protector shuts itself off at unacceptably low temperatures. Other issues with this product include a horrible setup menu, awkward HDMI pass-through, and several other flaws I can't think of right now since my main concern is that it isn't even functioning right now. Never again will I buy another Sony product. Completely unacceptable.

Pros: I am happy I bought this receiver. This is the nicest receiver I have ever owned. Great value for the money. It was properly packaged. No dents, scratches, no marks of any kind. Set up was easy. I run all my peripherals thru the HDMI ports and I love the sound output. Much better than my 20 year old Pioneer. My 30 day warranty is almost up and I have the utmost confidence this receiver will last me for years.

Pros: Poorly packaged. On arrival the box had damage. Opening the box proved that damage was on the receiver it's self. Unit works great tho. Put it thru it's paces, pretty much what I wanted it for. Other than the dent from shipping. It's a great unit. It's in a cabinet so the dent is really not a problem for me. Sounds fantastic compared to my 20 yr old TEAC. Which by the way is still preforming very well to be 20. Hope to get the same kind of service out of this one.

Cons: Packaging needs to be improved. If it had been packaged right., it wouldn't have a dent. Looks like something fell on top of the box & damaged the housing of the unit. UPS must have dropped something on it.

Cons: There is so much packed into this wee little box it takes a bit to get it to do everything you want. The instruction manual is needed to understand it. There is not network hookup. 30 day warranty, not sure if this is a con as most electronic devices fail in the first two weeks.

Overall Review: This is a 5.2 receiver the .2 refers to using two power sub woofers. Not sure if needed but its there. This is a refurbished unit and it works exactly like a new unit without the price. It came with all accessories except batteries for the remote. The box did not have a fancy graphics it was just plain however the unit was packed like it was, same foam padding and same accessories. For maximum enjoyment hook up a TV for the HDMI out so you can see the receiver menus. It would almost be impossible to adjust with out the visual menus. A person sent the receiver back due to this. I think I got his unit. I think I got an awesome receiver for the price.

Overall Review: I received a refurbished receiver in a pristine condition. Everything works well. I've left it on for over 3 months without any issues. Update (2017 November): Still works flawlessly after 3.5 years. I was looking into getting a 4K TV, and I just discovered that it does 4K passthrough.