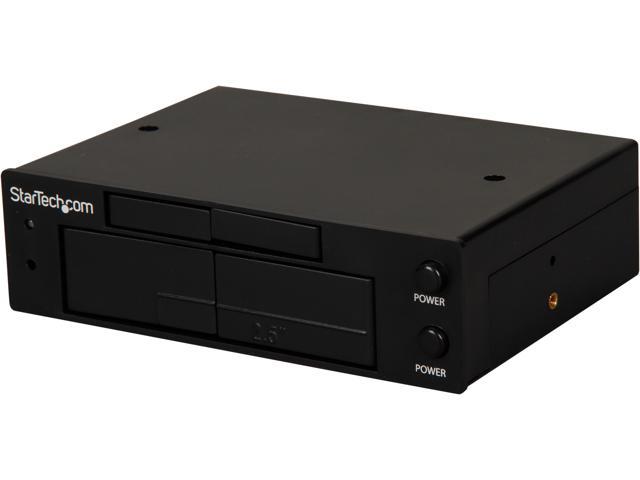 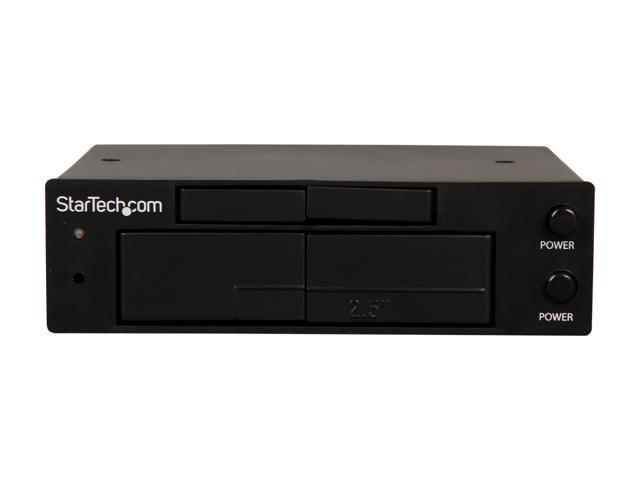 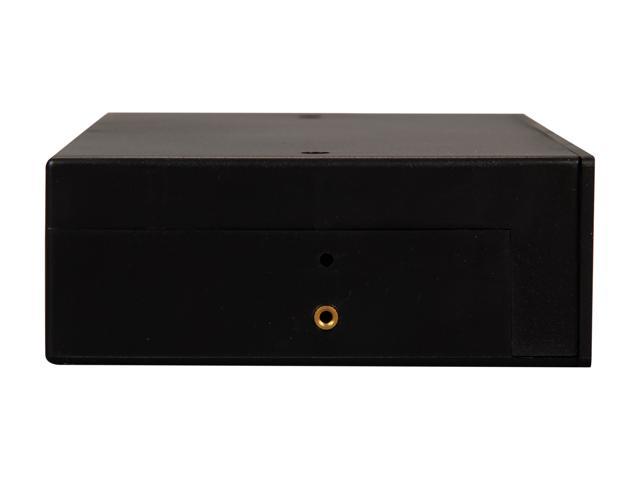 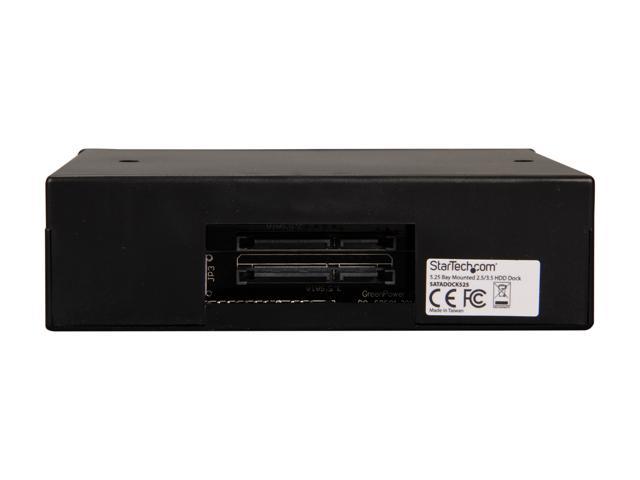 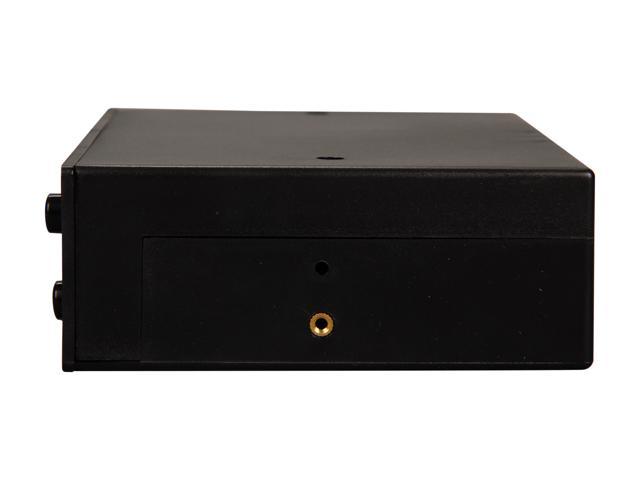 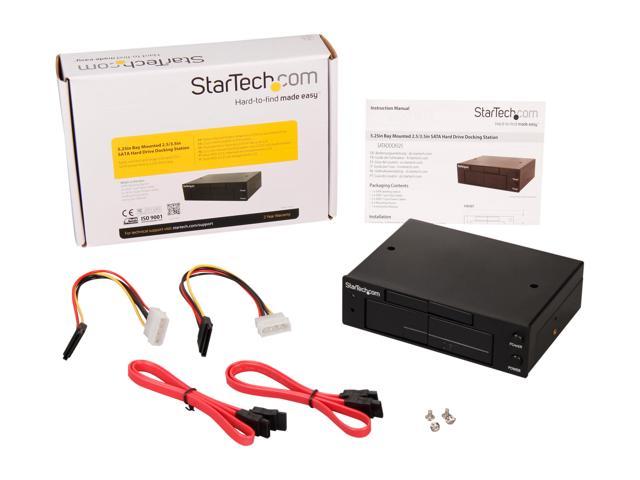 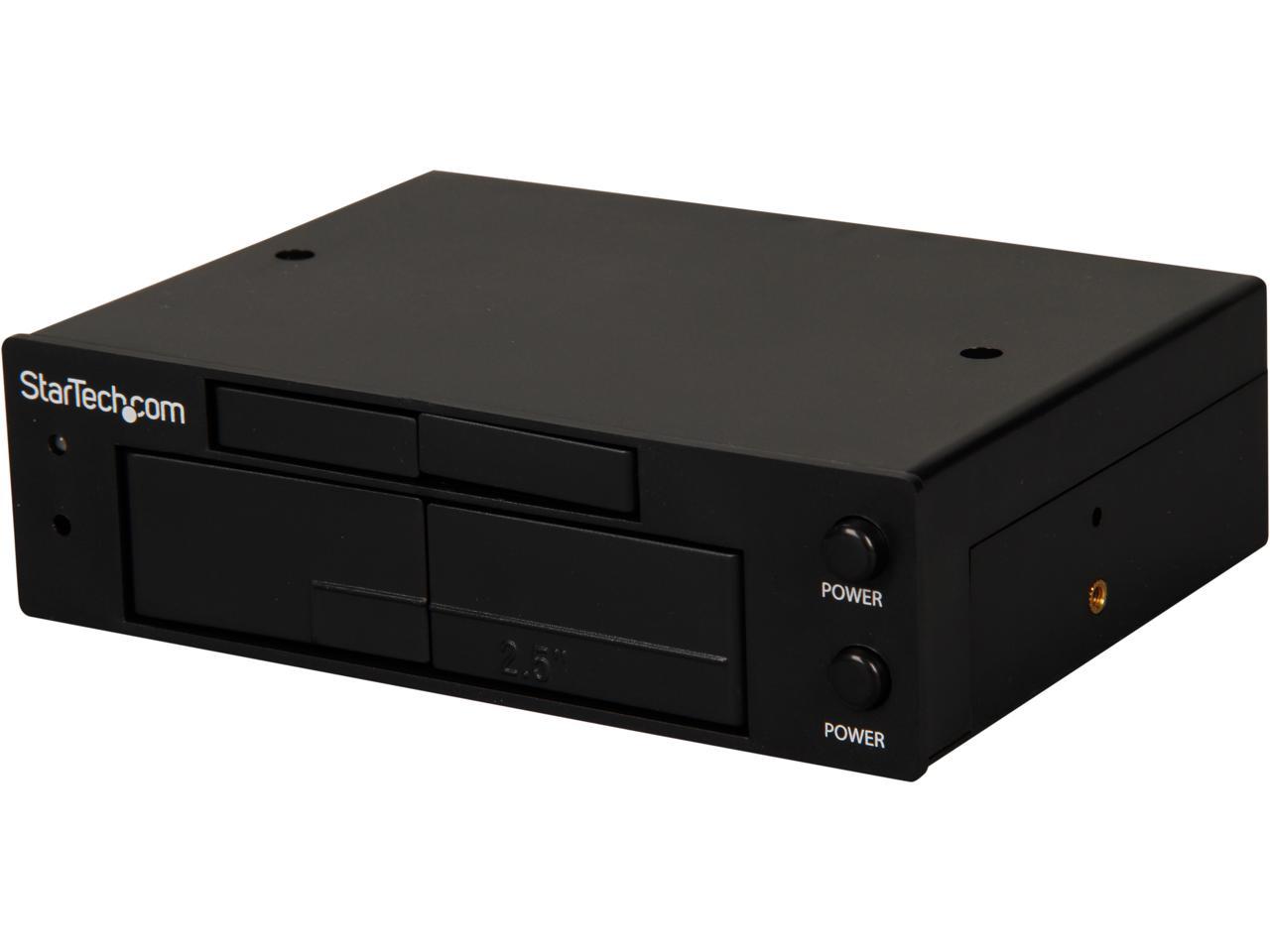 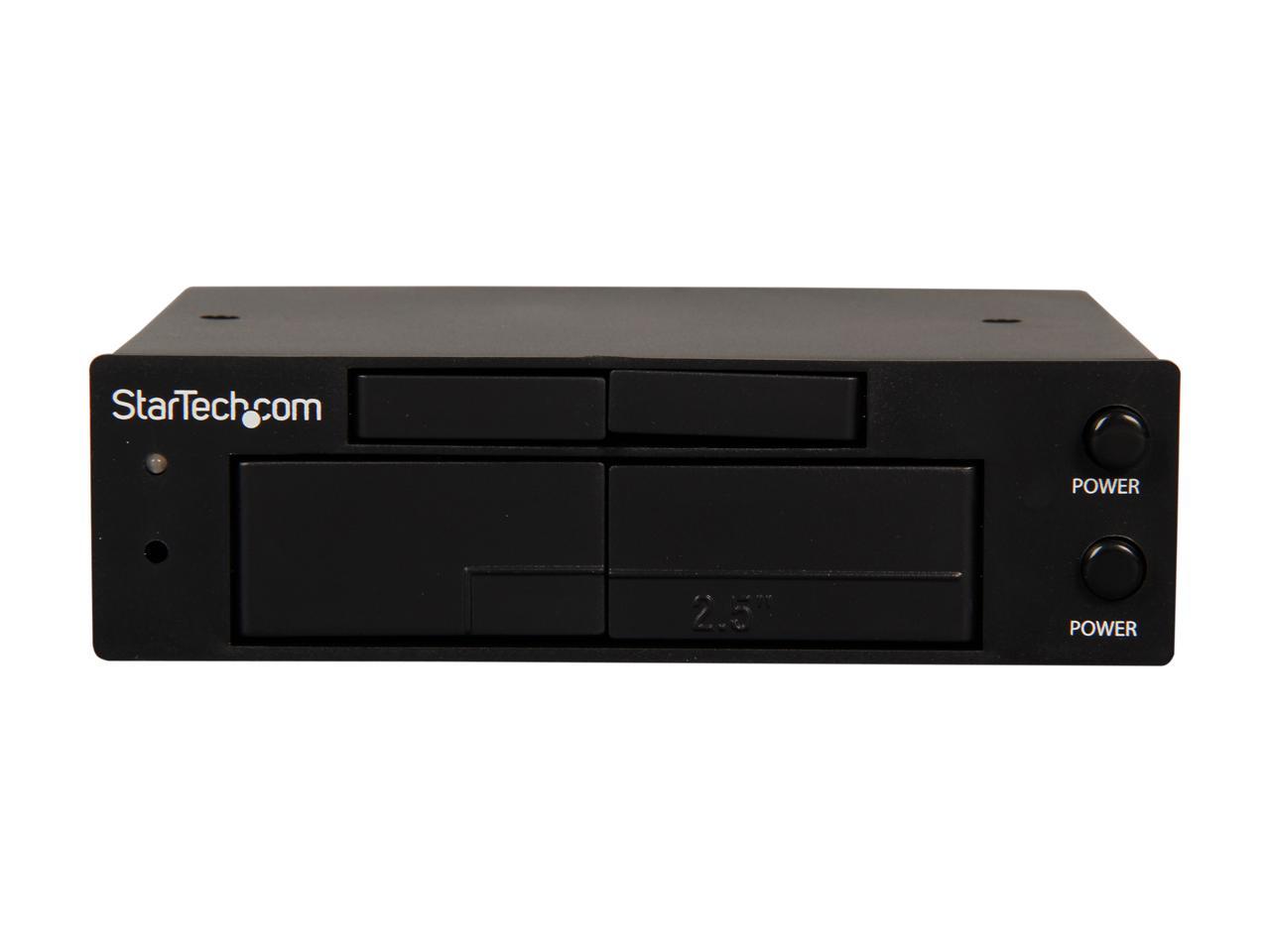 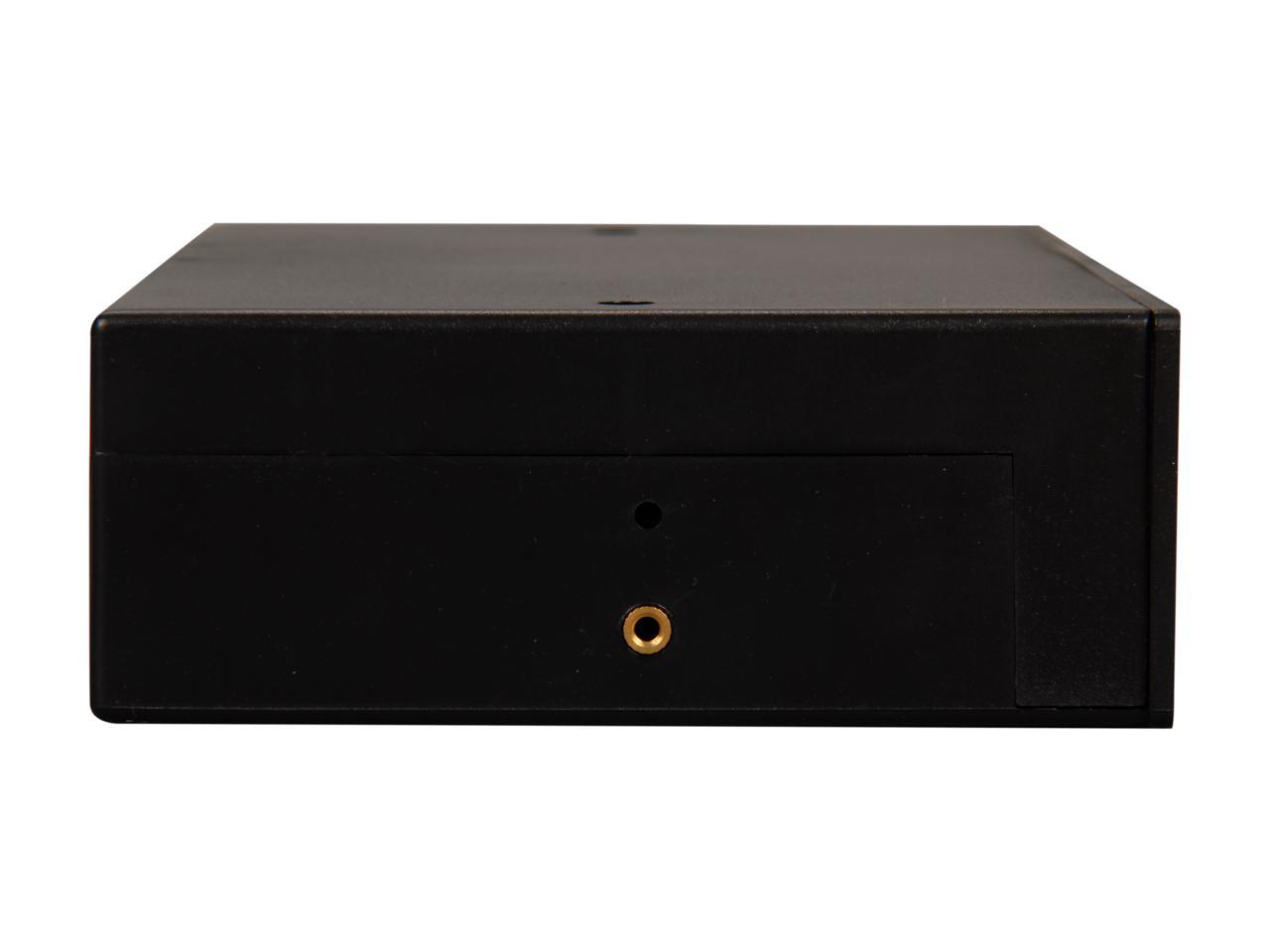 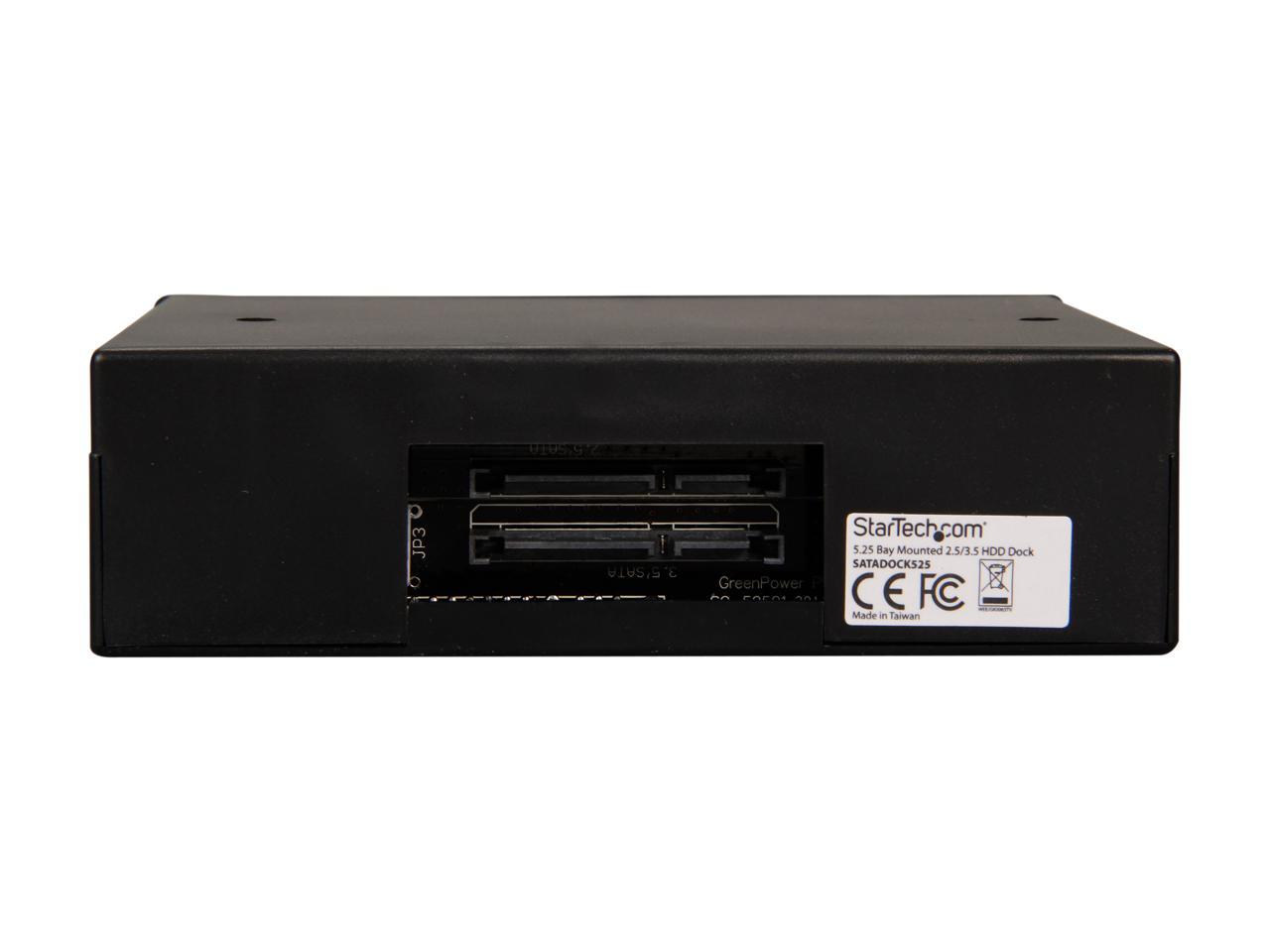 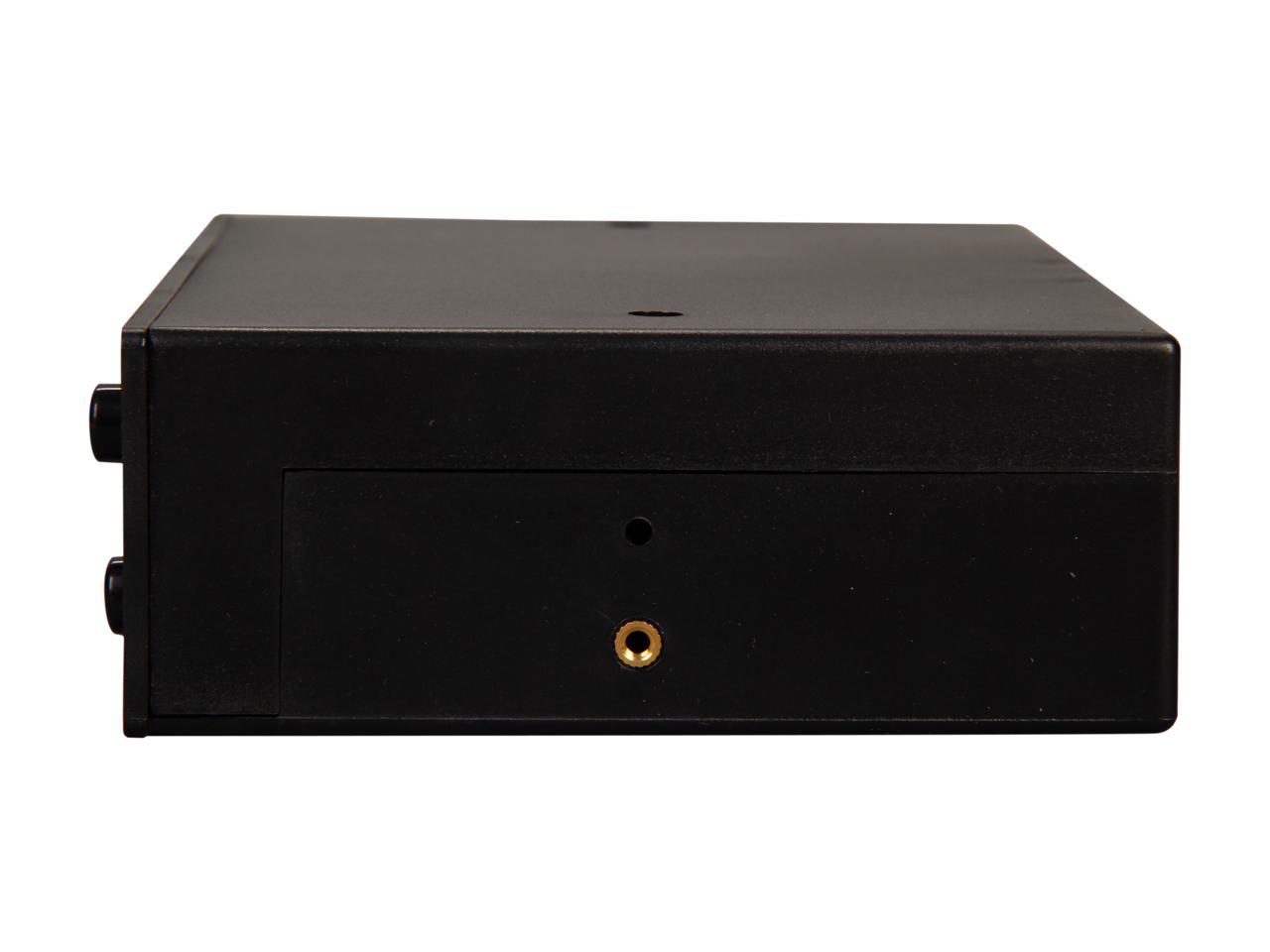 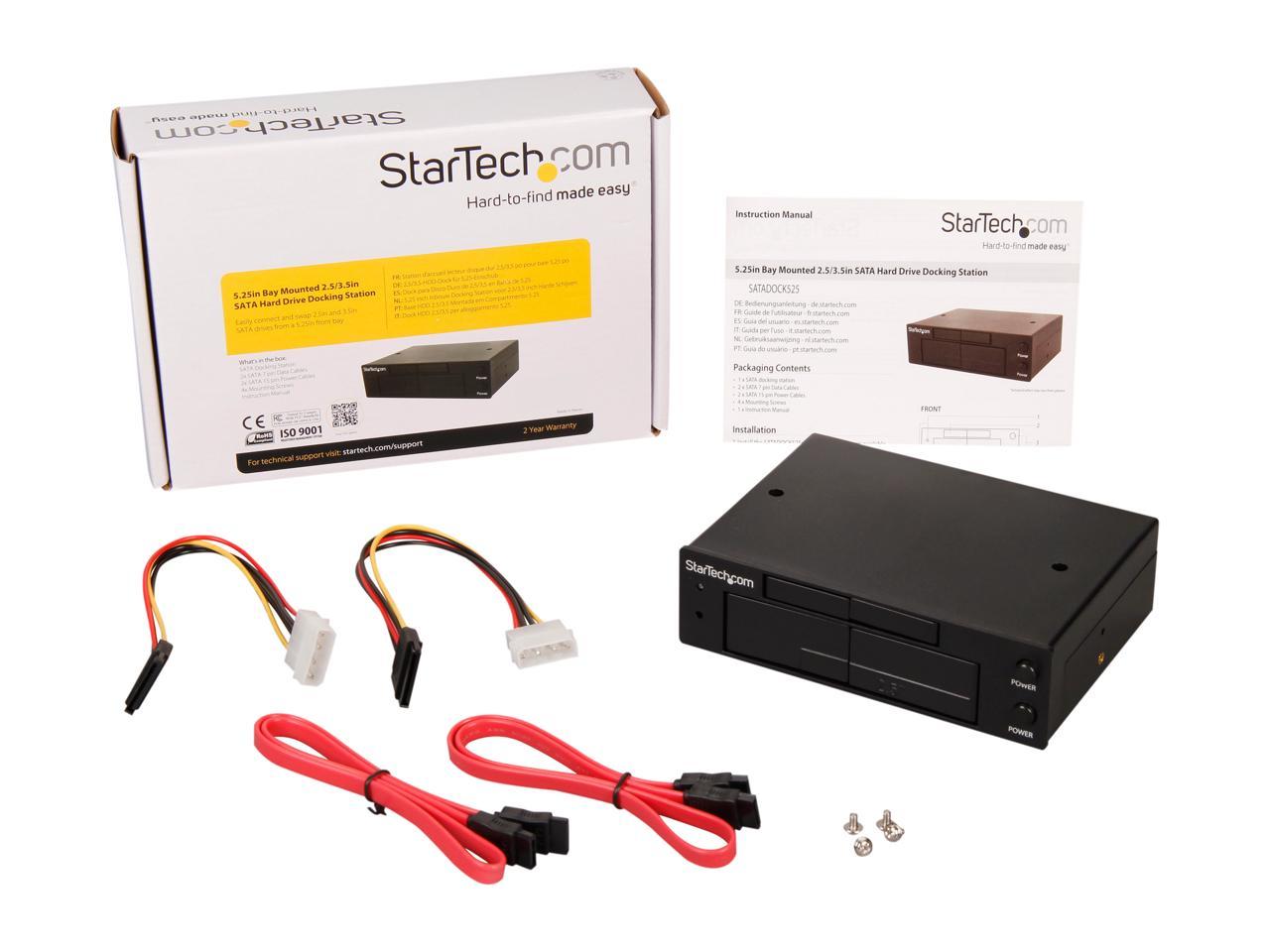 The HDD dock accommodates both 2.5in and 3.5in SATA hard drives and can support one of each at the same time. Plus, when the 3.5in slot is not in use, two 2.5in drives can be inserted simultaneously. And, the 5.25in bay-mounted SATA Hard Drive Dock features front panel power control, allowing you to power the drives on/off as needed.

Learn more about the STARTECH SATADOCK525

Pros: I'm a principle SW Engineer at a SSD company, was a HW Engineer many years back. I've used these on multiple machines both at home, my office at work, and in the lab. I change drives sometimes several times a week, other times about once a week. Usually I just keep about 3 drives in these with different versions of Windows or Linux, I just turn on the one I want and turn off the others. I have no permanent drives in the systems I use, they all plug in using these docks. They all still work just fine over a year later, and do not appear or feel as cheep as other writeups have said. If you want to clone drives, there is nothing like it, if you change OS's constantly, there is nothing like it. I just wish they made them for SAS too. In one year, between several machines, each with no perm drives, just two of these per machine (will let you plug in 4 drives), all bays still work, no issues except that they are really handy.

Cons: The only complaint I had was the each Dock supports two SATA drive plug ins, one 3.5, one 2.5. The connectors on the back (would be inside the machine) are very close and it is difficult to get them both connected. I swore alot doing this, but once on, they have not fallen off (on several machines) in the over 1 year these machines have been in operation. All the machines have been moved several times. For this I gave them 4 stars.

Overall Review: I've used EASEUS Disk copy to shoot identical copies of my Win7 and XP development drives several times, nothing is easier to use as you never have to open your PC, fumble for power, or whatever. Even if you never change your main HD, having this to check out other drives, or to backup is hard to beat for convenience.

Pros: I have one that has been working great for a year. Power off the drive, swap it out, put in the new one and power it up. Very convenient.

Cons: 2 more arrived today for 2 more computers since the 1 I have is working so well. NO POWER BUTTONS ON ONE OF THEM. Not damaged - the buttons were not in the sealed plastic back with the unit; defective as in the manufacturer forgot to put them on. No way to turn the drives off and on to swap the drives. I paid a reasonable amount for them and shipping was also reasonable for the 2 of them. The shipping cost on the RMA more than the cost to ship the 2 originally from NewEgg. How is shipping 2 cheaper than shipping 1?

Overall Review: I don't know - do we consider 2 out of 3 devices purchased in working order a bad average? I will give it 3 stars because the, now 2, that I have that are complete work good.

Pros: Innovative use of optical bay to hold two drives of different sizes.

Cons: Poor quality made out-of-the-box use impossible. The injection molded case was off square, top to bottom. The bottom was too wide to wedge into a 5.25" bay. The only two mount holes (should be more options to fit various brackets) were misaligned left-to-right, causing the case to twist.

Overall Review: Although given the opportunity I would by this again because there are no other products quite like this one, the build quality does not justify the price. Really, it's just a sata pass-through in a plastic case. This should sell for >$15.00

Pros: This Dock allows one to put two hard drives (one 2.5" one 3.5") into a single 5.25" drive bay. There is nothing close that I have seen that does 2 at the same time. It will be sad if and when this is no longer available. This unit makes a computer like an 8 track tape player. With the advent of the SSD you can keep what ever you want on what ever drive and just plug them in and use them. For instance I have my music on a 500gig SSD and can pull that drive out of one computer and plug it into my back up computer in all of 3 seconds. I have movies on another that is a platter drive. It is really simple this duel drive bay is just the bomb for the ability to use a computer as a JEEP. It just makes it versatile there is no other bay that does two as this one does. I use a Thermaltake V9 case with duel bays on top so that is 4 bays with this and I also have an Orico eSATA tray on my desktop for another hard drive of either 2.5" or 3.5". and the bottom of that V9 has a Seagate Go-Flex bay that can be used as a 2.5" bay if you insert the 2.5" SATA hard drive carefully into the slot taking into account that they don't line up perfectly they are made for the first run of the Seagate Go-Flex back up drives with the end cap that you can remove and plug them in via the SATA link. This is much better then hooking up any hard drive via USB. SATA drives you can leave plugged in all the time which Microsoft told me not to do with USB drives. So this Star Tech dock is the cats meow for this application I have two of them in a 2005 build an old AMD socket 939 machine. These bays are the only one that I know of that does two bays at the same time separately. I think their is a certain level of knowledge that goes with using these. It is a good idea to always insert them once you feel the pins engage with a smooth push in motion. They are delicate but not fragile. I'd love to know of another "Duel" bay that will take the place of this one but I have purchased at least 10 of them for all of my builds. Again versatility is the reason. The ability to switch out any drive in a heart beat. The front of the bay also has a power button for both bays. Also even the 3.5" opening has the 2.5" image on the front so you can use it for a 2.5" drive as well. Thus you can use two 2.5" or one 2.5" and one 3.5" such as a platter hard drive.

Cons: the screws that hold it into the 5.25" drive bay go into the front one (brass) and the back one (plastic) The plastic a bit fragile. the buttons feel a bit fragile though I have never had them not work in all the years I have been using them. The LED lights are a bit bright but they are a light that is what they do.

Overall Review: If someone made one of these in all aluminum and made the switches "feel" better and the lights dimmer it would still be the same unit with the same quality functionality that this has. Again once you use these for any time you won't want to ever be without one. They are just that versatile. There really is no substitute. If this is discontinued then someone else needs to pick up the ball on this. There is no better tech replacement for this unit. It just fits a need. I have been using them for many years. Totally reliable. I DJ on line and use to at a radio station. Plus I am an actor in theater. These units really are irreplaceable.

Pros: Great idea, and the design seemed good. I really liked the concept of separate power switches for the drives.

Cons: Unit was dead on arrival. I'm not sure what could be wrong with the device as it appears to be pass-through pin-to-pin connections for both power and data cables. However, there is a small board inside that may have had some type of damage or manufacturing defect. The unit could have more robust construction

Overall Review: I really wanted this to work as I wanted to reduce the cable/rack clutter that comes with external HD docks and to take advantage of the SATA III MB headers rather than USB or eSATA ports.

Pros: Fits two drives simultaneously in a single bay. Convenient for temporarily connecting drives. I have this motherboard with an Intel ICH7 storage controller that doesn't support AHCI, so I can't do true hotplugging with this dock. However, if you install the freeware HotSwap! utility (google it), you can get pretty close: When you want to remove a drive, just click the HotSwap systray icon and pick the drive from the menu. When you plug in a new drive, just right-click the same icon and pick "Scan for hardware changes."

Cons: My SATA cables would constantly fall off, because there's nothing on the dock to grip the connectors in place like you would find on a SATA hard drive. I had to buy combo SATA data/power cables from OKGEAR which stayed in place more securely.

Pros: This dock is great for backing up drives; both 2.5" & 3.5"! Laptop drives stick out about 5/8", are held secure, and are easy to remove. 3.5" drives stick out about 1/2 way and are less secure. I love being able to pop in a drive without installing in an enclosure. The drive bays have separate power buttons on the front. I've owned my 1st one for over a year. I was recently looking for a dual 2.5" drive enclosure when I found out that the 3.5" bay also accepts 2.5" drives. Wow, how did I miss that!?! So, I recently bought a 2nd unit for another of my backup computers.

Cons: None really. I wouldn't use it for drives permanently installed in a computer; especially the 3.5" bay.

Overall Review: I've bought Startech equipment for many years and I don't remember ever being disappointed.