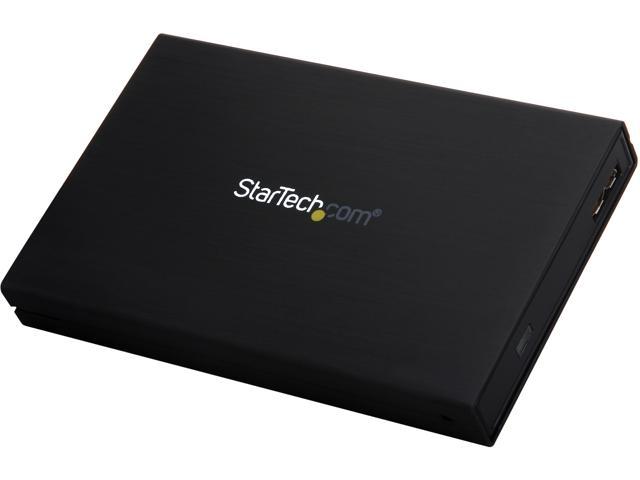 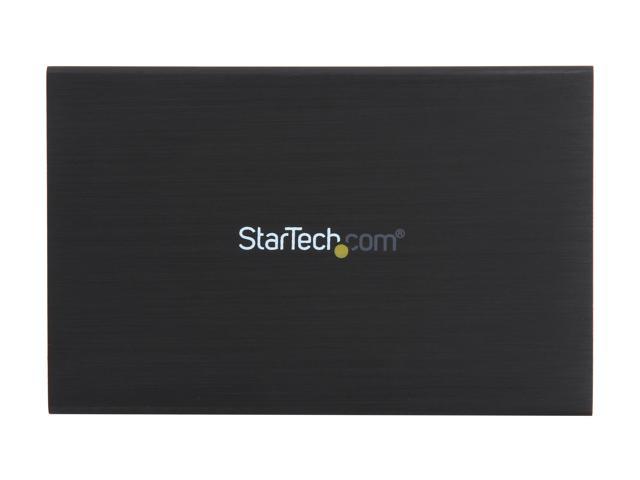 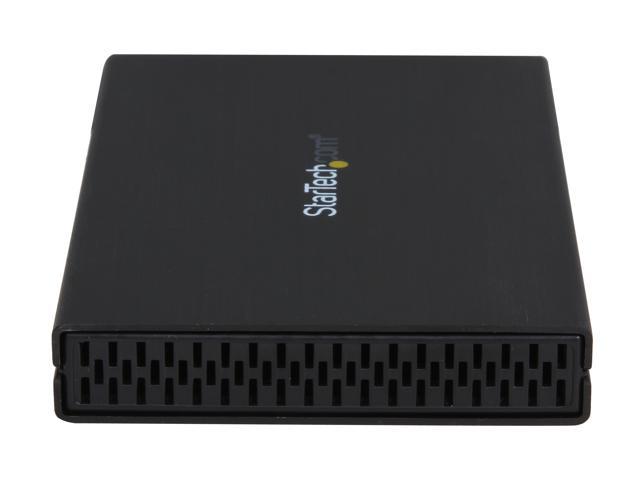 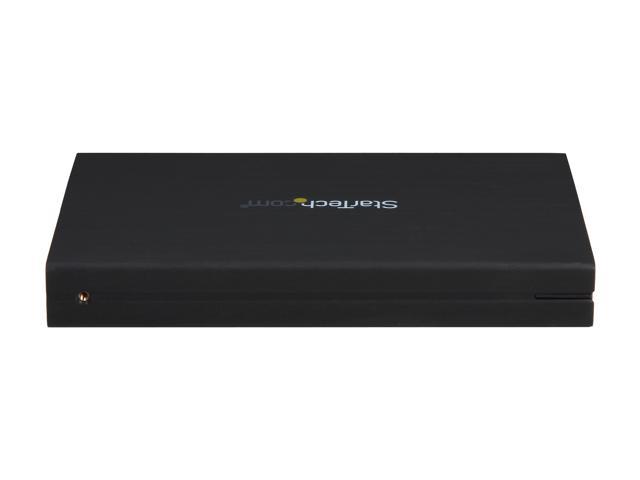 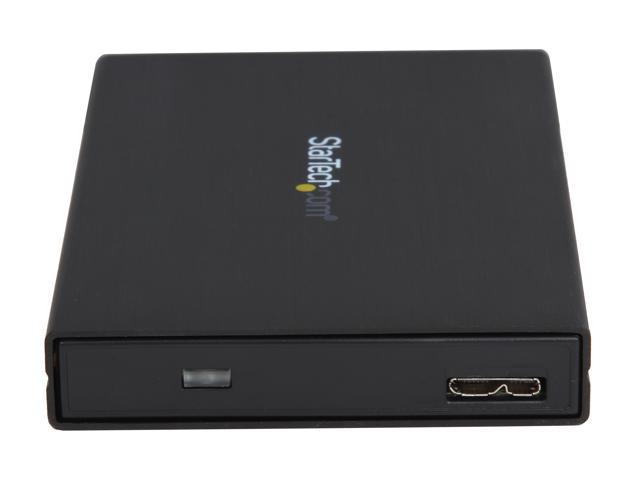 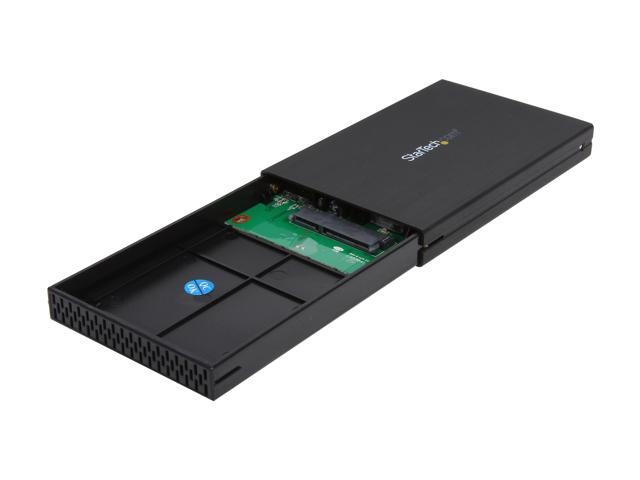 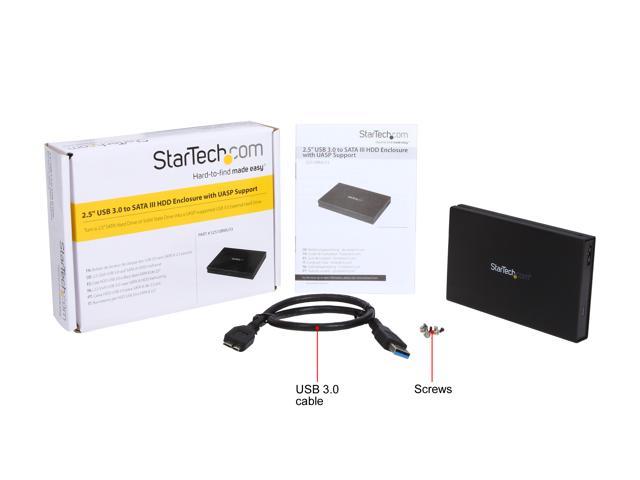 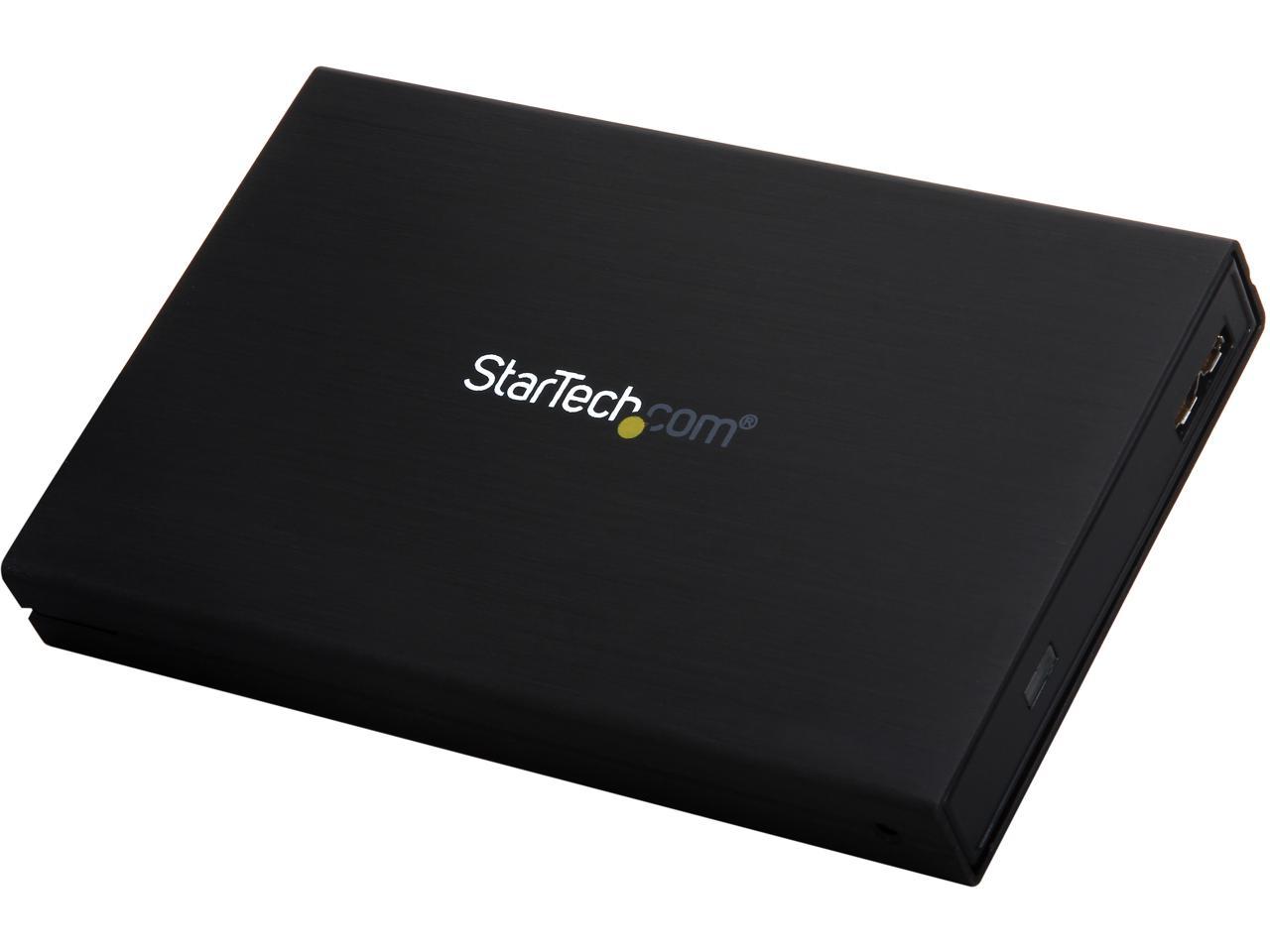 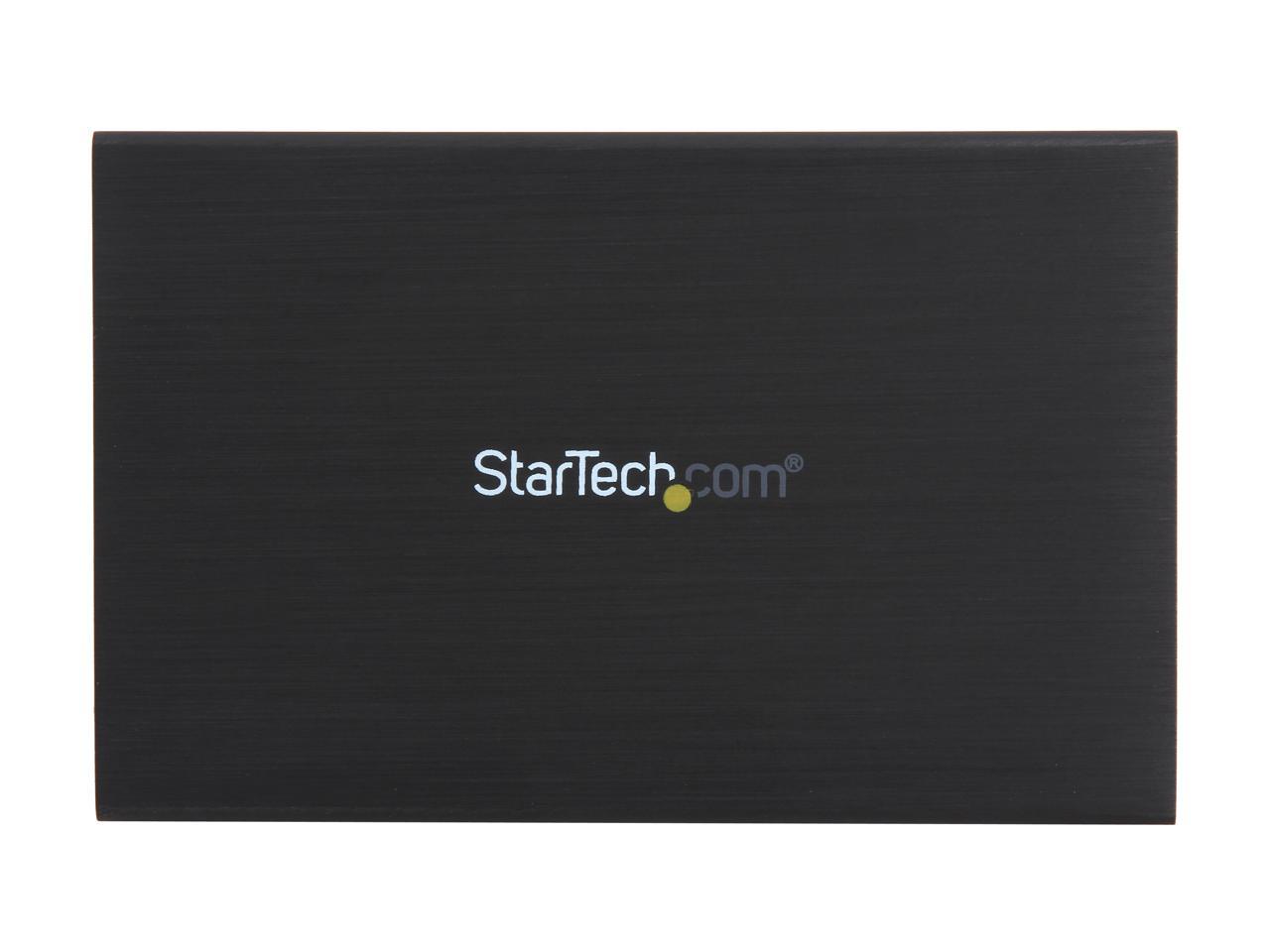 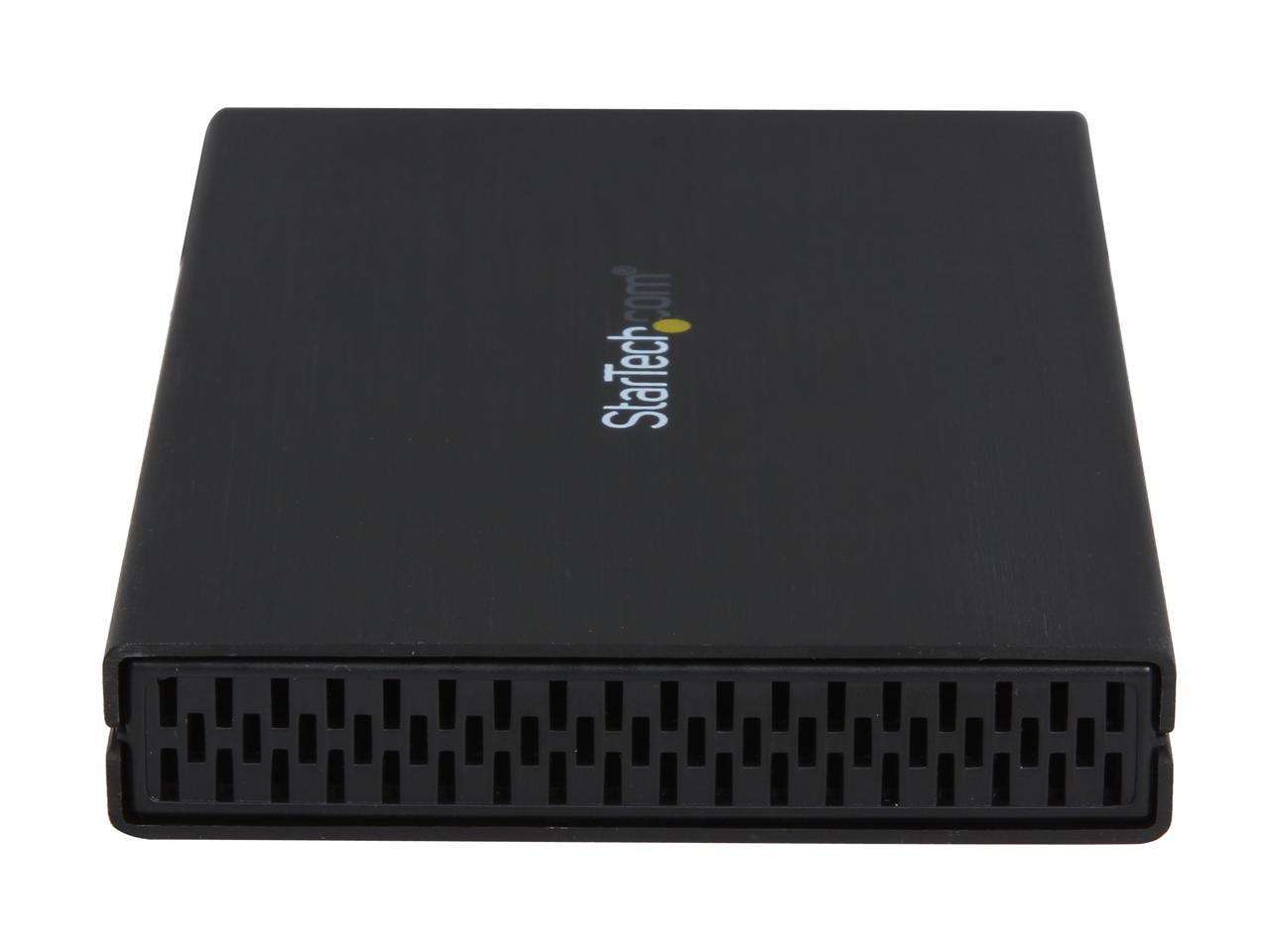 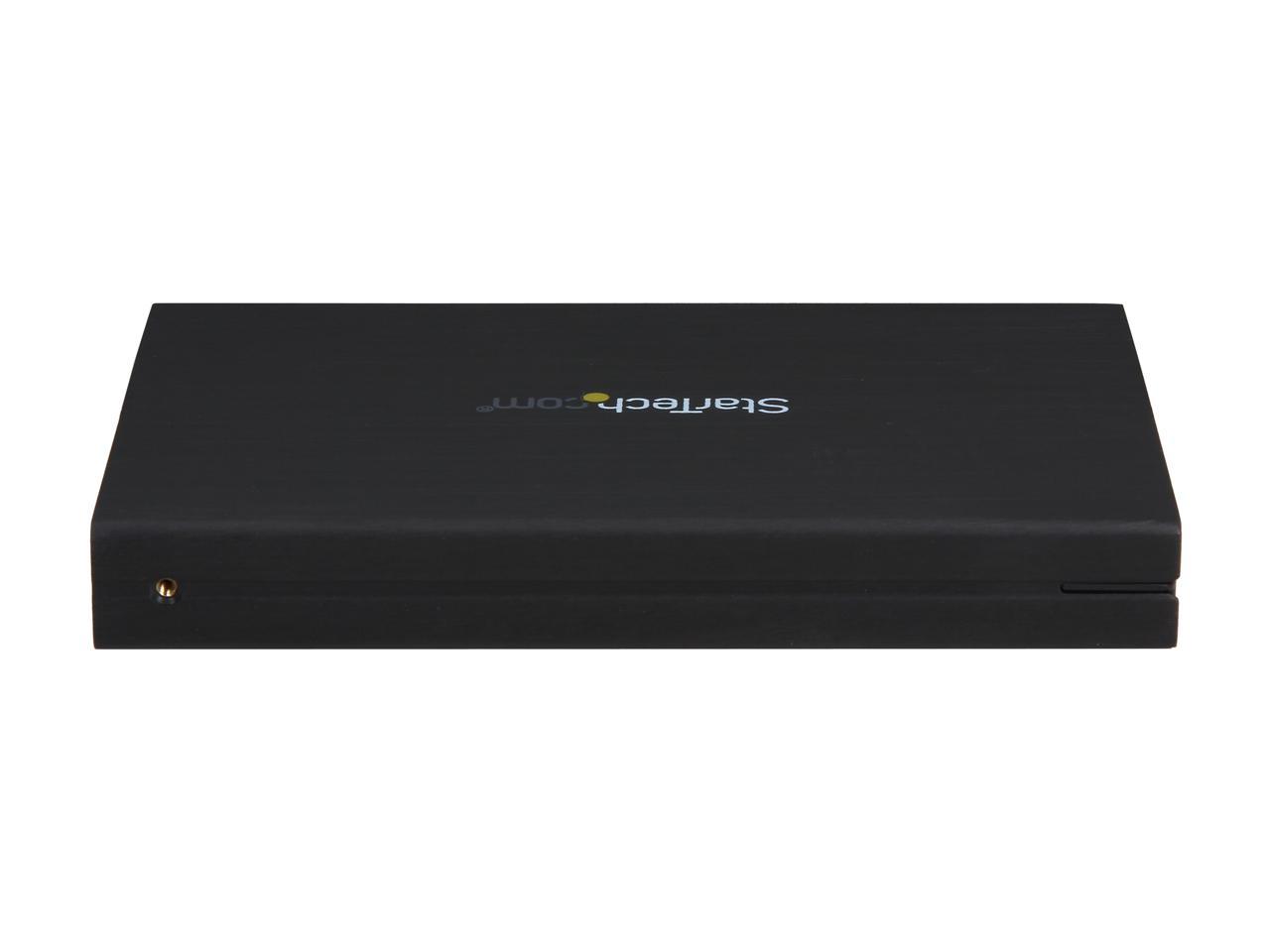 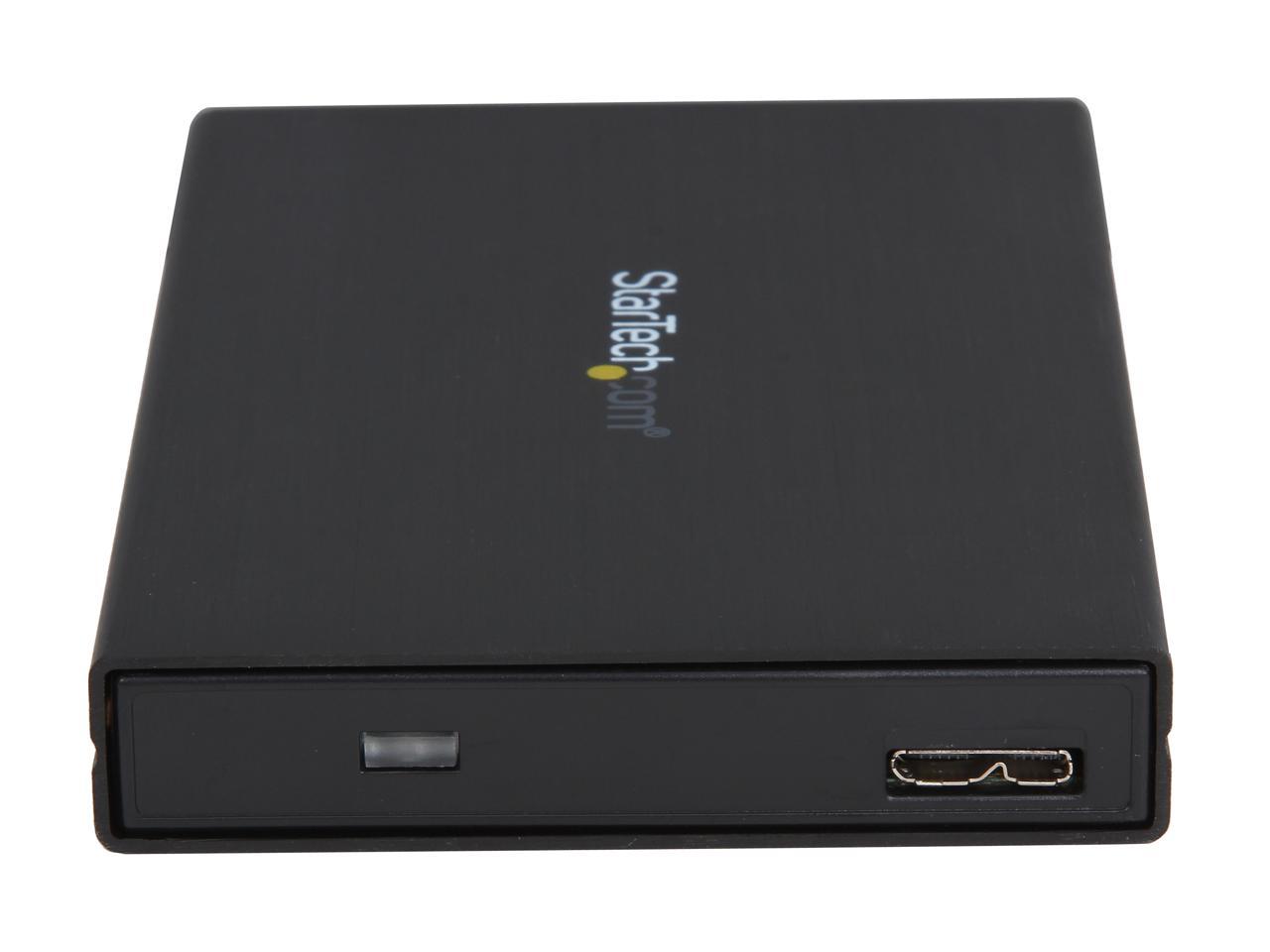 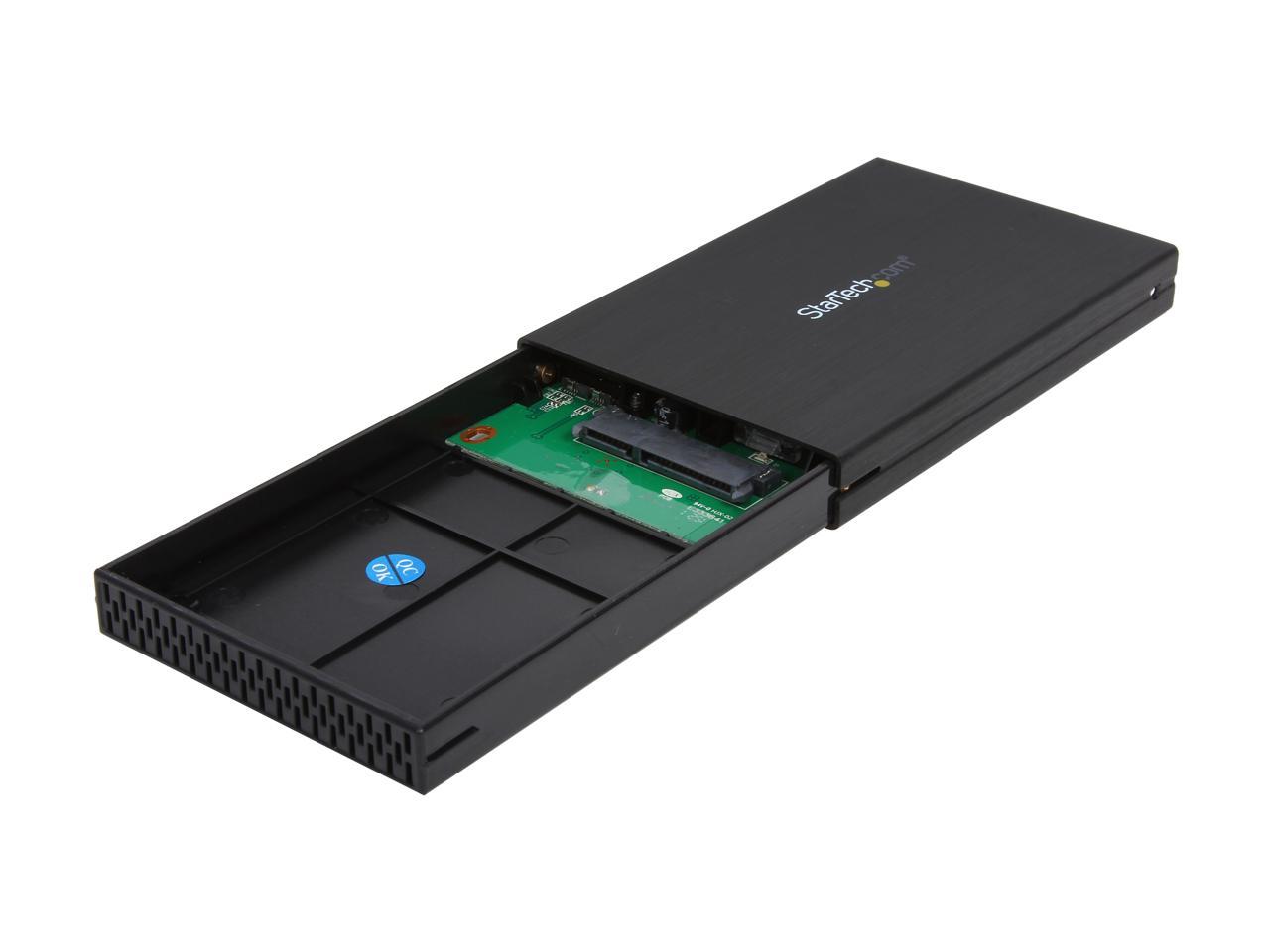 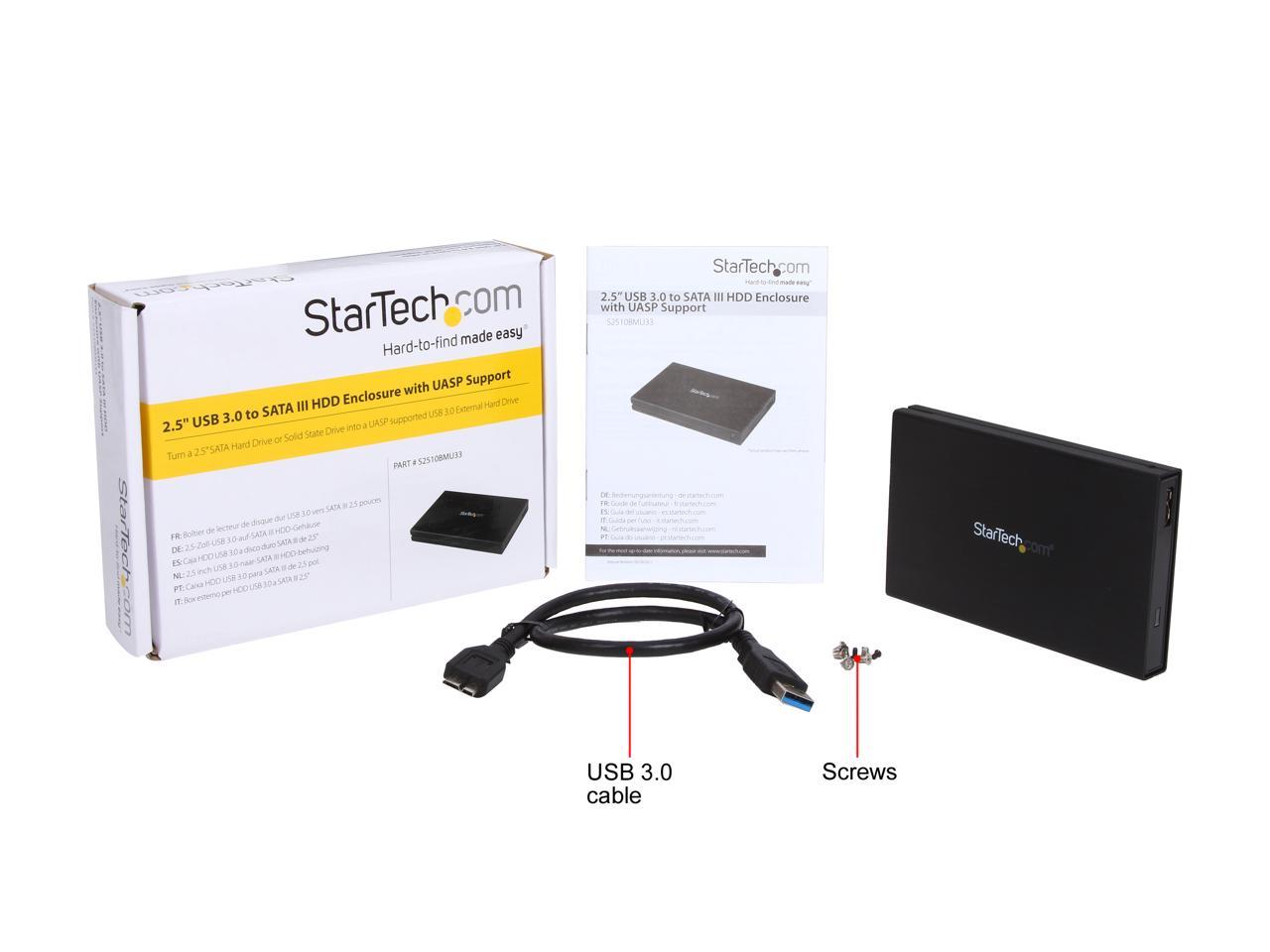 Learn more about the STARTECH S2510BMU33

Pros: StarTech's enclosure provides fast performance with newer systems and protects your drive from shock, dirt, and moisture. I put the latter to the test soon after receiving the enclosure. A photo shoot ended with a downpour. The enclosure is modeled on a micro Pelican Case and shrugged off the water. Adding a drive only requires slipping off the rubber wrapper and opening a latch. Less than a 15 second job. Performance is also very good for a USB 3 interface. On new hardware running Windows 8.1 or above or at least Yosemite on a Mac transfer speeds to a SSD were very close to the rate when plugged into a SATA port on the motherboard. Overall transfer rates slowed by under 10% for writes and about 13% for reads. This is at least 50% faster than a similar enclosure that did not support the UASP protocol.

Cons: The StarTech enclosure is not the one to choose if small size is your primary consideration. It is almost exactly 4x the size of a small, bus-powered enclosure. I also would not recommend this enclosure for anything other than a SSD. The internal foam lining gives excellent protection to your drive but is lousy at conducting heat The enclosure itself is plastic, further hindering heat transfer. Transferring any sizable amount of data raises SSD temperatures by 20C. Hard drives would have a problem. This is the reason for the single egg deduction in my rating.

Overall Review: Two comments: Most of the drive heat escapes from the side of the enclosure opposite the logo. If you can live without StarTech's logo, turning the enclosure upside down makes for a happier drive. Transfer speeds drop by over 75% when plugged into a Windows 7 system or older Mac (pre-Yosemite). UASP is needed to let the box strut its stuff.

Pros: Works with 2TB drive - product specs only said tested to 1TB. Works with XBOX one just fine as USB 3.0 powered drive Sturdy, compact, unobtrusive, aluminum case. Drive secured with screws. Drive tray secured in outer housing with screws. Drive PCB not exposed near outer shell. Comes with good cable and one long enough to front/side place on Xbox yet comfortably reach around and plug into the back.

Overall Review: My first Startech product and I'm very pleased. It's well made and the most up to date on all current technologies. Case gets a bit warm on use - but not hotter than a drive runs at. So I think it's adequately conducting heat out. It does have front vents. It's on it's side next to the XBOX ONE. I added side edge bottom feet (not included) to raise/isolate it some. Secondarily I added bumpers to ensure a gap if the Xbox was pressed against it on the shelf. I researched a ALL of the NewEgg enclosures of this type. Most others had issues such as - plastic case; even if sturdy doesn't conduct heat out like an aluminum case - Real drive capacity limitations such as 512 or 1TB - Systemic reliability issues reported by reviewers - Pseudo "USB 3" port upgrades to what is/was a USB 2.0 product. So not reliabily matching speeds - SATA II support - or "SATA III Compatability" which can mean it won't choke on SATA III but will only run at SATA II speeds.

Pros: Works with all of my other 2.5" SSDs and HHDs

Cons: The 15mm Seagate Constellation 2 fits in the case, but my guess is that the HDD draws too much power to be able to run off of USB power only. Now I'm in search of another enclosure that meets the height requirement and has an external power source as this enclosure does not have the ability to use an external DC power source.

Cons: Input connection sucks. It breaks free of the circuit board or pushes in and becomes unusable in approximately 6 months. This renders the unit useless.

Overall Review: I've had two of these units now. I purchased it initially due to it's rugged rating / drop protection, which it does provide. However, the socket connector is the Achilles Heel of the unit. I will not purchase again, nor can I recommend this enclosure.

Pros: The most important fact is that you can use a HDD or a SSD with this case. It supports both as the main board have a IDE interface and a SSD interface This supports USB 3.0 This case is slightly larger allowing for more bulkier drives Screw driver included for the mounting screws included

Cons: No carrying case but this is not really a con.

Overall Review: I would highly recommend this case for anyone who want to build an external storage drive with USB 3.0. Also, if your upgrading from IDE to SSD (There are NGFF 2280 and 2242, 2260 IDE cases for older laptops), you can use this case to get IDE USB 3.0 support for faster speeds and making your older HDD useful. The issue with other IDE USB 2.0 cases is that the HDD uses so much power that an additional USB tap for power need to be used. Since this is not an issue with USB 3.0, this is the best option.

Cons: -Very Tight Fit: One of the screws got stripped -Flimsy Built in Wire: I didn't use the drive everyday, but if I did, I would say it would last less than 6 months. Eventually the flimsy wire did break to the point the hdd would lose power. (It wasn't the HDD fault, I tested the HDD and it passed every test). If I wiggle the wire between the usb and the enclosure, I was able to transfer just fine. But I would have to keep my finger there so the wire wouldn't move. -Even when I first got the enclosure, the wire would always come out. There's nothing holding the wire wrapped around the case. The picture is very misleading, the majority of the time the wire would just hang out rather than staying in place like the picture illustrates.

Pros: Worked right away and no issues. Also just requires one USB whereas my other SSD case required both usb to be plugged!!

Pros: handles both ide and sata drives. everything recognized works fine with win 10. I had an ide SSD, plugged it in and away we went.

Cons: black screws proviced for case too small. simply fall out. used two screws I had on hand and every thing worked fine.